I learned about Michelle Zauner's memoir, Crying in H Mart, on Instagram. A writer I follow, Alyse Whitney, was gushing about the book and her praise convinced me to order it. I am so, so glad I did.

This book is Zauner's recounting of her final years with her mother as she battled cancer. Michelle moved home to help care for her, and they were able to take one last trip to Korea, her mother's home country, before she passed.

While stories around grief can feel heavy, this one doesn't. It feels beautiful and like Zauner is honoring her mother's legacy with every word.

One of the things Zauner shared with her mother was a deep love for Korean food. On page four, she describes:

"Growing up in America with a Caucasian father and a Korean mother, I relied on my mom for access to our Korean heritage. While she never actually taugt me how to cook (Korean people tend to disavow measurements and supply only cryptic instructions along the lines of 'add seasme oil until it tastes like Mom's'), she did raise me with a distinctly Korean appetite.  This meant a reverence for good food and a predisposition to emotional eating. We were particular about everything: kimchi had to be perfectly sour, sagyupsal perfectly crisped; stews had to be piping hot or they might as well have been inedible. The concept of prepping meals for the week was a ludicrous affront to our lifestyle. We chased our cravings daily."

I was moved by this section, in which Michelle explains that her mother showed she cared by memorizing each person's food preferences. On page 15:

"She was allergic to celery. She rarely ate swets, with the exception of the occsional pint of strawberry Haagen-Dazs, a bag of tangerine jelly beans, one or two See's chocolate truffles around Christmastime, and a blueberry cheesecake on her birthday. She rarely snacked or took breakfast. She had a salty hand. I remember these things clearly because that was how my mother loved you, not through white lies and constant verbal affirmation, but in subtle observations of what brought you joy, pocketed away to make you feel comforted and cared for without even realizing it. She remembered if you liked your stews with extra broth, if you were sensitive to spice, if you hated tomatoes, if you didn't eat seafood, if you had a large appetite. She remembered which banchan side dish you emptied first so the next you were over it'd be set with a heaping double portion, served alongside various other preferences that made you, you."

Zauner's writing is so descriptive, particularly her food writing, that it's hard not to salivate while reading.

Towards the end of the book, as her mother is declining, I deeply resonated with her mix of complicated emotions. For example, she shared how her father started adding things to the family calendar in a frenzy. She writes:

"My father started planning a trip for us to go wine tasting in Napa, a thinly veiled guise to keep up momentum. If we always had something to look forward to, we could trick this disease. Not now, cancer, there's a wedding! And then a tastng in Napa! Then an anniversary, a birthday. Come back when we're not so busy."

Anyone who has suffered a loss knows that line of thinking is true. Similary, she shares the process of selecting a burial plot:

"I wanted to be able to bring flowers and have somewhere to put them. I wanted a place where I could fall against the earth, collapse on the ground, and in the various seasons weep into the grass and dirt, not stand upright before display shelves as if I were visiting a bank or a library."

Her writing just cuts straight to the heart, doesn't it?

I was truly moved by this book. If you know someone going through a tough loss, I think they would find it comforting and healing.

If you'd like to learn more about Michelle Zauner and the process of writing this deeply personal book, read this fantastic profile piece in The New York Times.

END_OF_DOCUMENT_TOKEN_TO_BE_REPLACED 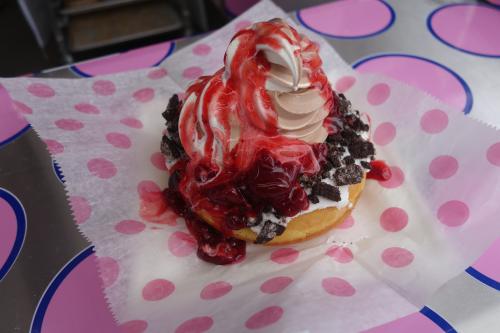 This year I went to the Big E for the very first time. Sharing a photo diary of my day at the fair, including all the outrageous things we ate.

Chef David Chang's memoir is one of the best books I've read in years. I could not put it down.

My favorite place to go when I visit my parents in Miami, FL is the Fairchild Tropical Botanic Garden. There is something so serene about the wide open, green spaces, the way the ponds shimmer in the sun and the bright colors of all the flowers and plants. As if I needed another reason to love Fairchild, each year they host a Chocolate Festival.