It's week 36 of the pandemic and thanks to an election that may never end, this has felt like the longest week of all time. I'm exhausted. How are you?

I know many of us are taking comfort in streaming right now, especially as a much-needed break from the 24/7 news cycle. Before jumping into this week's picks, here are a few gems coming up:

Now onto this week's recommendations.

1. Somebody Feed Phil, Season 4 (Netflix) - I just love Phil Rosenthal. I love his boisterous energy, the way his lips turn upward into a sneaky smile when he's had a bite of something new and amazing, our shared love of ice cream, and the way he incorporates his family into the production of his highly successful show.

In this new round of episodes, Phil, his brother Richard and the camera crew travel to Rio de Janeiro, San Francisco, Singapore, the Mississippi Delta and Hawaii. I watched all five episodes in two sittings because the show makes me so happy.

Of the five, my two favorites were Rio de Janeiro and San Francisco. The Rio episode made me miss international travel so much. The beaches, the markets, the live music - I wanted to experience all of it. And most of all, I wanted a mango caipirinha.

San Francisco is a city I've traveled to many times for work, so I was curious to see which spots would be highlighted. It made me want to book a flight directly to Tartine and to stroll through the Ferry Building (and its farmer's market) with the legendary Alice Waters.

As he has every episode since the beginning, Phil ends each trip with a Skype call home. Since his mother passed away last year, the video chats now feature his dad, Max, and his wife, Monica. It cracks me up every single time Max or Monica asks about Richard! The Jewish family dynamic is just so classic.

If you need a mood boost this weekend, this will do it.

2. The Queen's Gambit (Netflix) - Netflix kept recommending I watch this and since the title didn't make it clear what the show was actually about, I kept scrolling by it. Then one of my favorite podcasts, Forever35, suggested it. I gut checked it with a friend who usually predicts what TV I'll like and she said, "Definitely try it."

Well, a day and a half later, I had watched all seven episodes.

The Queen's Gambit is the story of Elizabeth Harmon, a young woman who is orphaned as a child and learns to play chess from the janitor at her orphanage. It turns out she's quite gifted. She is eventually adopted and her mother becomes her manager, booking her in chess tournaments all over the world.

Let me begin by saying: you do not have to like or understand the game of chess to enjoy this show. It's about wrestling with your talent, your need to win, and how that fits into the rest of your life.

I found the middle episodes a tad slow, but by the final episode, I was completely sucked in again.

Once you finish watching, listen to this episode of NPR's Pop Culture Happy Hour, where real-life chess player Linda Diaz fact checks the portrayal of the game in the show and shares her own competition experiences.

3. The Holidate (Netflix) - Y'all, it's Christmas movie season and I am so here for it.

Netflix had been promoting The Holidate, starring Emma Roberts, pretty heavily and I was at the ready to watch it once it dropped.

It's not actually a Christmas movie (though it's advertised like one). Instead, it follows Sloane (Roberts) and Jackson as they serve as each other's plus ones to all the festivities throughout the year - Valentine's Day, Cinco de Mayo, Mother's Day and more.

Though the plot was predictable, it was still fun to watch and just the kind of light hearted viewing that I need right now.

4. Midnight at the Magnolia (Netflix) - Yes, I watched two holiday movies in one week. #SorryNotSorry

This gem co-stars Natalie Hall and Evan Williams as Maggie and Jack, childhood friends who now co-host a popular morning radio show together. At the start of the holiday season, they talk about their significant others meeting their parents (on-air), but when they both get dumped, they decide to pretend to be dating each other to keep their ratings up.

The movie gets its title for the New Year's Eve party at the Magnolia Jazz Club, where they plan to do a live show for their listeners.

I found the movie slow, but the final 20 minutes were very endearing.

That's it for this week! I've also continued watching The Baker & The Beauty on Amazon, Million Pound Menu on Netflix and when I really need something soothing, Hart of Dixie on Netflix.

Take care of yourselves this weekend. It's been an especially hard and draining last few days.

END_OF_DOCUMENT_TOKEN_TO_BE_REPLACED 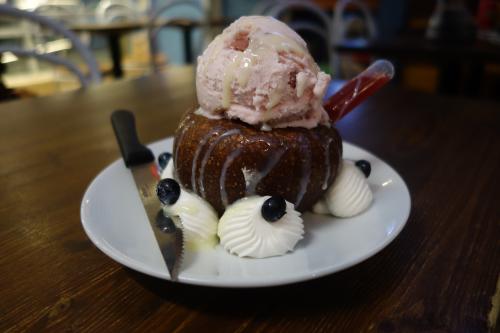 Double Chin in Boston's Chinatown has some of the most unique and creative menu items in the city. Be sure to save room for dessert!

Looking for a new show to stream? Red Oaks is a true gem - funny, poignant and romantic. Binge all three seasons on Amazon.

It finally feels like summer has arrived in Boston. We've had consistently beautiful weather and wearing sun dresses and flip flops is at long last the norm. During beach season my daily intake of frozen treats always seems to double. Ice cream after lunch? Sure. Walk to get a cone after dinner? Absolutely. Frozen yogurt at 2pm because I feel parched? You know it.  If you're like me and you're in a total ice cream state of mind, satisfy those cravings at one of these ten dessert Meccas.  1. Branch Line (Watertown, MA)