On Monday night I headed to Pammy's, the just-opened "pasta paradise" on Mass. Ave in Cambridge, as Eater calls it. Pammy's is co-owned by chef Chris Willis (brother of Bully Boy Distillers founders David and Will Willis) and his wife Pam (who the restaurant is named for). Chef Willis has cooked at Rialto (R.I.P.), Clio and ABC Cocina in New York.

We arrived at 6:30pm for our reservation, which I had made earlier that morning on Open Table. The restaurant is on the stretch of Mass Ave. between Central Square and Harvard Square, next to The Plough and Stars.

Pam herself was at the hostess stand to greet us. We were walked to our seats, which to my surprise, were at the communal table in the heart of the dining room.

The table is 14 feet long and made from salvaged drafting tables. A strip of marble runs down the center, serving as the ideal spot for vases of brightly colored wild flowers.

I would have much preferred a sit at one of the caramel-brown leather booths along the perimeter of the dining room. Next time I will be sure to make that request with my reservation.

Once we were settled into our corner of the table, our waiter popped over to take our drink orders. I decided to go with one of the signature cocktails, the Bella Donna. It was aged rum, strawberry (muddled and for garnish), punt e mes, orgeat, lemon and peychaud's. I am not exaggerating when I say this is one of the best cocktails I have ever had (shhh, don't tell Eastern Standard).

The drink is the perfect balance of sweetness and ice cold freshness. Had I not been driving home, I would have had at least one more.

My dinner date ordered a glass or rosé. When she asked for our waiter's opinion on that particular wine, he replied, "Oh yeah, that one is a patio pounder." That was all the endorsement she needed!

She kindly let me have a sip and it was indeed excellent.

While we looked over the dinner menu, we were delivered two pieces of the house made pulgiese bread. The bread was just the way I like it - crusty outside, doughy inside.

To begin, we decided to share the heirloom tomatoes with garlic toast. How can you resist tomatoes in August?

Each bite of this dish was super bright and fresh. There were tomatoes of all colors - red, yellow and green. The garlic toast was expertly crisped and had just the right amount of zing (you will not be breathing fire).

We also sampled the seared gem lettuce salad with English peas and pecorino cheese. Before the dish even arrived, I knew I would love it because I am a huge fan of all three ingredients and seared / grilled lettuce. Pammy's version did not disappoint!

The lettuce was warm from the sear, but was juxtaposed with cold pea puree, which yielded a delicious contrast in every bite.

For the main course, we knew we wanted pasta. There were two vegetarian options and both sounded fantastic, so we ordered one of each to share.

The first to arrive was the mezzi rigatoni with goat yogurt, zucchini, peaches and pistachios. As a person who generally doesn't enjoy fruit, I was a bit nervous and skeptical about this combination, but this wound up being my favorite dish of the entire night.

Our waiter explained that "goat yogurt and peaches just pair beautifully together - that is the magic of that dish." I also loved the tenderness of the zucchini and the crunch from the pistachios. We could not stop eating it and were already plotting our return to order it again. If you only try one thing at Pammy's, the rigatoni has to be it.

Our second pasta dish was the fettucce alfredo, which you can order in a half or a full portion. We went for the half in an attempt to save room for dessert. The Pammy's take on this classic dish is garnished with pink peppercorns which gives every bite a pop!

Usually, fettucce alfredo is drenched in heavy creamy sauce. This rendition was lightly coated and punched up with the pink peppercorns (so addicting) and fresh basil.

With the pasta plates cleared, it was time to focus on dessert. I was immediately intrigued by the cocoa nib cake with caramel budino, but my dinner date was laser focused on the blueberry and peach crostada. Rather than duke it out, we asked our waiter for his recommendation. He said, "The crostada is hands down the best dessert we make. I ate two last night after my shift! It will change your life." How can you order something else after that?

The crostada arriving smelling like a fresh stack of blueberry pancakes. It was topped with a perfectly spherical scoop of creme fraiche ice cream.

My friend took the first bite and her eyes rolled into the back of her head. She sang its praises, "The blueberries are so delicious and the pastry tastes like freshly baked pie crust." Our waiter informed us each crostada is made to order, cooking for three minutes in the oven before being brought out to a guest.

With trepidation I put my fork into the pastry and took my first bite. To me, it tasted like the exact same flavor profile as a blueberry muffin. I didn't love it. Next time I will be getting that cocoa nib cake!

As the food coma started to set in, our waiter swung by with the check. Our bill and a comment card was resting on the most adorable floral tray.

Every design element at Pammy's is gorgeous. It reminds me of the home section of the Anthropologie store, which always has me swooning.

Before leaving, I stopped to snap a photo of the bar, which showcases a statue of the Greek goddess of the harvest, Demeter. Co-owners Chris and Pam saved it from a crumbling estate in the Hudson Valley.

It adds such a fun level of drama to the space and even made me want to sit at the bar next time.

Every time I venture out to a new spot, I hope to have a great experience, but Pammy's totally blew me away. The inventive cocktails, the use of seasonal vegetables and the epic pasta dishes has skyrocketed Pammy's to the top of my favorites list.

You ate... a fruit... dessert??! (Gasp!) I read that part thinking, nope, no she didn't, she definitely ordered a second dessert smothered in chocolate. This place looks amazing. Did you happen to notice if they have any GF pasta offerings?

The waiter made the crostada sound so amazing that I decided to have an open mind. I forgot to ask about GF pasta, but I will happily call and find out!

Last year one of my college friends moved to Central Square. Since then I have been hanging out in that neighborhood quite a bit. 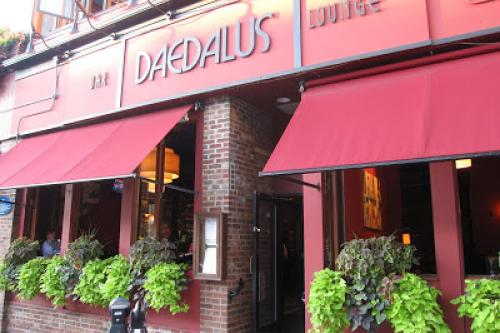 Last night I had dinner with a high school friend at Daedalus in Harvard Square.

Last night I met one of my favorite girls in Harvard Square for dinner.