In my early twenties I spent a lot of time in the South End (thanks to a love interest with an apartment in that neighborhood). I have always been enchanted by the brownstones, the iron railings, the stunning window boxes, the community gardens and parks, and of course, the parade of adorable dogs.

In addition to its beauty and charm, the South End is also home to some of the best restaurants in Boston. A few of my favorites include The Beehive, Masa, Metropolis, Myers + Chang, Picco and Tremont 647.

Earlier this week I met up with a friend to check out Frenchie, the newly opened French restaurant in the space formerly occupied by Kitchen on Tremont Street. Back in March 2015 I had one of the best Restaurant Week meals of my life at Kitchen, so I was very sad to see it go.

In the front window, a neon sign screams the restaurant's name to locals and visitors who are strolling by.

Inside, the restaurant maintains the same layout as Kitchen - one long dining room with tables to the left and bar seating to the right. Above the tables, in the same neon lighting as the Frenchie sign, the words "In Vino Veritas" glow over the row of diners. Can you tell there is a heavy emphasis on wine here? This sign reminded me of the "Rosé All Day" sign at Hampton Social in Chicago.

Thank you to my dinner date for snapping this sign! My camera was being a bit finicky.

We had made a reservation that morning for 6:30pm (thanks, OpenTable!). We arrived right on time and were seated immediately.

Our table was at the very back of the dining room, beneath strands of twinkle lights. I must say, it was quite romantic. We were excited to receive the menus and begin to compose our multi-course meal.

The Frenchie menu is 50% wine and 50% food. The wine list is laid out in a way that is not intimidating (a rarity) and easy to understand.

Since we were dining in a French restaurant, we both decided to order French wine. Beaujolais for her, rosé for me.

While we were perusing the food menu, our waiter delivered us a basket of the most fantastic French bread. While I normally try to skip the bread basket (to save room for dessert, duh), at Frenchie, the bread is a must. Butter too!

To begin, we decided to share the cheese board. It arrived with four perfectly cut pieces of cheese, crostini, honey and walnuts.

Each of four cheeses had a unique flavor, but were equally rich and decadent. This is how you begin a meal!

Though we devoured those four crostini rather quickly, we supplemented with bread from our basket.

We also shared the brussels sprouts, served with currants, over a black garlic aioli.

After a few sprouts my friend said, "I really love when brussels sprouts have a char on them like this. I'm also really into the currants, they add a sweet contrast to the salty sprouts."

Next, my dinner date enjoyed the steak tartare. The steak was mixed with pickled mushrooms and a yoke aioli, then topped with parmesan cheese. It is normally served with capers, but my friend asked for no capers (she's not a fan).

After meticulously placing the very last bite on her fork, she explained, "This dish was so delicious. It was light and I really enjoyed the taste of the mushrooms and parmesan cheese."

Next, we each dipped our spoons into bowls of creamy onion soup. When you think of onion soup in a French restaurant, you are likely picturing a bowl of onions in a beef broth, topped with a slice of bread and covered in bubbling hot cheese. Well, Frenchie's version is a blend of three kinds of onions. Plain, simple and a total winner.

The soup had a frothy texture. Once we had emptied our bowls (which took mere minutes), we both remarked how light the soup was. We didn't feel too full, which was a nice surprise.

Since we still had room after finishing our soup, we shared an order of French fries. The fries were topped with fresh herbs and served with a meyer lemon aioli.

When you picture French fries in a classic French restaurant, you imagine fries that are cut super thin, crisped perfectly and still have a warm yellow color to them (almost like a McDonald's fry). That is what I was expecting from Frenchie, but these fries just didn't measure up. They were a bit too thick and never really crisped up, making them limp as you lifted them or tried to dunk them in the aioli. While the herbs were a fresh touch, I would have preferred more salt and pepper.

Once the dinner plates were cleared, we were excited to peek at the dessert menu. There were four choices - chocolate mousse, créme brulée, lemon meringue pie and a French chocolate cake. On Frenchie's website, the chocolate cake is described as "for serious chocoholics" so obviously we chose that!

This cake is plated so elegantly. The perfectly round chocolate cake is brushed with a gold stripe and topped with two paper thin slices of strawberry. It is finished with a créme anglaise and studded with a few blueberries.

After her first bite, my friend exclaimed, "This is one of the best chocolate cakes I have ever had. It's not too sweet and has a great consistency." The cake reminded me of a dessert I had tried at Finale years ago. I agree that the texture was perfect (smooth, rich, bursting with flavor) and I also enjoyed the way the tartness from the strawberries and blueberries cut through the decadent cake. Had I been wearing a belt, I would have had to loosen it after eating this!

Once we had licked the dessert plate clean (no shame), our waiter brought us our check. To sign, we were handed a red feather pen. It's these small touches that really bring a restaurant's personality to life.

Since I had loved Kitchen so much, I was admittedly a bit skeptical about Frenchie. Could it live up to the meals shared in the space before it?

Frenchie carries on the legacy of Kitchen, adding many of its own fun touches. The space has been spruced (wait until you see the gorgeous floral wall paper) and the staff is top notch. Loic Le Garrec (of Petit Robert Bistro) is the manager and Alex Falconer (formerly of Josephine in Kenmore Square) is executive chef. In the spring time, Frenchie hopes to add a 16 seat patio.

When you dine at Frenchie, be sure to order a cheese plate to start and the French chocolate cake to finish!

Thank you! I am falling in love with the South End all over again. I could see you and Bob really enjoying Frenchie. Wonderful wine selection and decadent food! Lots of meat options to explore (that I didn't sample, obviously).

I really enjoy reading your reviews, I appreciate that you take time to point out little details and talk about more than just the food (even if the food is very important, of course!). I am now craving for chocolate cake (as always) ;) 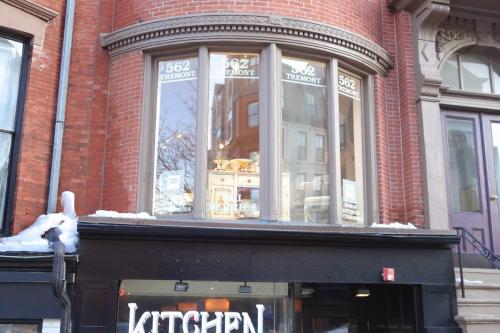 Today and tomorrow are the final two days of winter Restaurant Week here in Boston. This year, Restaurant Week has been rebranded as Dine Out Boston. Unfortunately, they didn't do a very good job of communicating that, so a lot of people have been confused or didn't realize it was happening. Thankfully, I have a long-standing Restaurant Week tradition with two friends, so we were all over it.

Tonight my mother and I checked into the Inn @ St. Botolph in the South End. After unpacking we decided to head down to Tremont Street for dinner. Our original plan was to sit outside at the Beehive, but the whole restaurant, including the patio, was closed for a wedding. How could we be upset about that? We walked up the street and decided to try Metropolis Cafe, a place neither of us had ever been. Metropolis Cafe is owned by the Aquitaine Group, which owns Aquitaine, Union Bar and Grille and Gaslight. 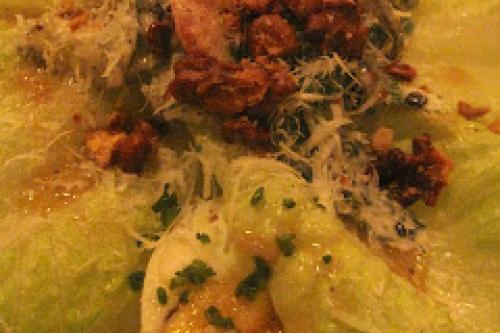 People who know the restaurant scene in Boston know that Hamersely's in the South End is one of the city's best bets for fine dining and they also know that you always order the chicken. Though I've known about Hamersley's forever, I've never eaten there myself. Earlier this month my mother flew up from Miami for work and offered to take me out to celebrate my birthday (again) and my recent promotion at work. She was going to be in the South End with her client for the day so she suggested Hamersley's and I happily obliged.