One of the best things about summer is being able to finally check out all the shows you've been reading about or hearing about from family, friends and coworkers. Most of the popular fall TV shows are on hiatus all summer, giving all of us binge watchers plenty of time to stream in June, July and August.

Recently I was on a JetBlue flight to Washington D.C. with a coworker when an advertisement for the Amazon show Catastrophe splashed across our TV screens. Excitedly she asked, "Have you ever seen that? It's hysterical." I hadn't heard of it, but she swore it was laugh-out-loud funny, so when I got home that night I decided to watch the first episode.

Catastrophe has two seasons so far, each with six episodes. The episodes are 30 minutes, making them super easy to watch right before bed (or all in a row on a weekend). The show stars Sharon Horgan and Rob Delaney as strangers (also named Sharon and Rob) who meet in a bar in the U.K. and wind up spending the entire next week together. They are completely inseparable until Rob has to fly home to the U.S. (to Boston!).

*SPOILER ALERT! Do not read on if you do not want to know anything more about this show or its characters.*

Once Rob is home in the States, he gets a call from Sharon a few weeks later. She's pregnant. In a very unlikely (dare I say, unrealistic) plot twist, Rob decides to move to the U.K. to be with Sharon and pursue raising the baby together.

What makes Catastrophe so amazing is that this unlikely choice is juxtaposed with some of the most honest displays of a romantic relationship that I've ever seen. Sharon and Rob fight, they scream, they hit below the belt, but they also crush on each other, try to impress each other and desparately attempt to win over each other's very skeptical families. It's charming, endearing and brutally honest.

I think this review on NPR really hits the nail on the head:

"Indeed, one of Catastrophe's joys is that whether the topic is sex, pregnancy, childbirth or matters toilet-related, it's consistently plain-spoken and brutal — sometimes for laughs, sometimes because to be otherwise would be dishonesty by elision, and maybe sometimes because there are new stories to tell when you expand the field to places lots of people either can't play or decide not to.

Just as important, though, is the fact that Catastrophe is, in its particular, everybody-poops kind of way, deeply romantic. While it's not especially unusual for romantic comedies to successfully be both romantic and funny, this one is special because humor inside the story is a large part of the reason it's romantic. It uses laughter within scenes — Horgan's especially — to underscore that Sharon and Rob are in love, but even more that they are on the same side, and aren't the kind of bickering people who will eventually make an audience wonder why they're together at all."

I also love this review from The Atlantic, which is worth the full read.

What's even more impressive is that Sharon Horgan and Rob Delaney not only star in the show, but they are also the writers. It's clear they spend hours and hours cracking each other up and trying to figure out the most sincere way to play out a situation, even if it's crass or cringe-worthy.

My only complaint about Catastrophe is that there aren't more episodes! If you are looking for something new to stream, this is it.

END_OF_DOCUMENT_TOKEN_TO_BE_REPLACED 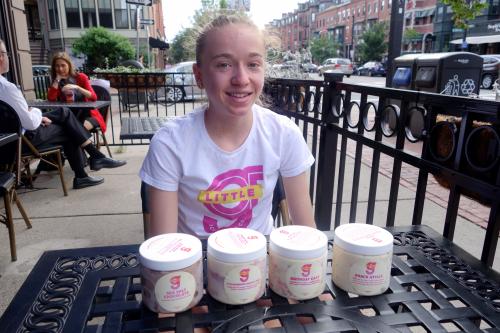 Ice cream is my undisputed, favorite food on the planet. I grew up in a family of ice cream lovers. My grandfather worked in the super market industry his whole life and introduced us to Brigham's at birth. My whole family can tell you why the butter fat content of Brigham's is what gives it that extra creamy taste. All three generations of Gallers and Goldmans are ice cream fanatics.

Read: The Girl With The Lower Back Tattoo

In the past 30 days I have traveled to New York, San Francisco, New York (again) and Los Angeles. This whirlwind month of jet setting and its multitude of flights and train rides has given me ample time to read. Most recently, I finished Amy Schumer's book "The Girl With The Lower Back Tattoo."

You may remember me posting about IDENTITIES last year, which is Harvard's student-run fashion show. Each year the models walk in front of a sold out room (600 people!) and another 4,000 fashionistas streaming the event online. This year IDENTITIES is presenting its 10th annual runway show. The mission of the peer-led organization is to "highlight fashion as an artistic and intellectual pursuit, and to celebrate cultural achievement in the industry."