Read: The Girl On The Train

Before my family's Cape Cod vacation last month I ordered a bunch of books on Amazon so I would have ample reading material on the beach. I decided to take three with me including Paula Hawkins' thriller The Girl On The Train.

Many have compared this book to Gillian Flynn's novel Gone Girl, which I loved and hated at the same time. Now that I've finished The Girl On The Train, I can understand the parallels.

The Girl On The Train is set in London, England and the story centers around a woman named Rachel. She and her husband have gotten divorced and she's living with a roommate, working a sad office job. Each day she takes the same train into work and back out again. During her daily commute she passes the same rows of houses. Over the months she has come to recognize some of the residents of these homes, including a particular couple that she has named Jess and Jason. One day, Jess, the woman she sees every single day on her commute, goes missing.

Jess' real name is Megan and she lives with her husband Scott in a house behind the train tracks. She used to run an art gallery but has been staying home for the last several months. Megan's disappearance comes as a shock to everyone, everyone except her husband. We later learn the two had a huge fight before she left the house the night she went missing.

To complicate matters even more, Megan and Scott live down the street from Rachel's ex-husband Tom and his new wife Anna. Rachel often gets drunk and calls their house repeatedly or worse, shows up at the front door.

While the intertwining of these characters lives is certainly enough to keep the reader hooked, what is really gripping is the way the story is told from multiple perspectives. Rachel, Megan and Anna all narrate different portions of the book, so sometimes you get to hear the same chain of events from more than one point of view, adding a layer of depth to the plot.

All five of the main characters are deeply flawed and to be honest, very unlikeable. However, Megan's disappearance is a crime you as the reader feel you must solve.

The final 20 pages of the book completely shocked me. I was not prepared for the reveal of the truth behind Megan's disappearance. I may have shouted out loud, "What the ****!"

I would be sad that I finished the book, but it has been made into a movie and it looks like it's going to be pretty interesting. The film version is set in New York (which bothers me) and stars Emily Blunt as Rachel. Justin Theroux plays her ex-husband, Tom and Laura Prepon plays her roommate, Cathy. The movie hits theaters in just a few weeks on October 7, 2016.

If you're looking for a great summer read, definitely order or download The Girl On The Train. It's addicting. Once you finish, you can reward yourself by seeing the movie.

I hadn't been interested in this book until I saw the commercial for the movie (bad, I know!) but now I may add it to my summer reading!

I highly recommend it. It's such a quick read!

such a good book. so good. glad you liked it.

I remember reading about it in your last book round up! I'm so glad I decided to read it.

I loved this book! Steph recommended it with "I didn't like it, but you might" HA! I really did, so interesting and twisty! I'm not sure if I want to see the movie or not because I may want to keep the imagination strong... But it might be too hard to stay away! I would be curious to see how they've done the movie...

She told me the same thing! I totally hear you on not wanting the movie to spoil how you pictured it in your head. I think the Emily Blunt casting feels really off, but Justin Theroux as Tom is spot on. Bring on the evil, ex-husband!

END_OF_DOCUMENT_TOKEN_TO_BE_REPLACED 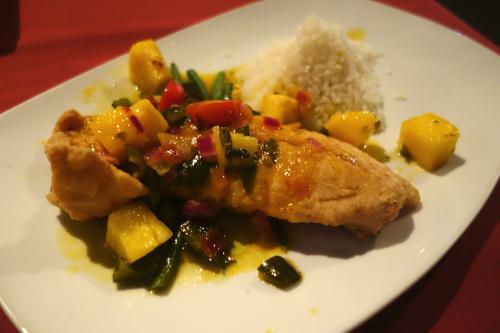 Yesterday I shared with you the spectacular beaches and picturesque views from my long weekend in the U.S Virgin Islands. While the highlight of the trip was absolutely the beach day on St. John, the meal we had on our final night was a very close second.

This summer I have been streaming up a storm. I've already watched Bloodline (Season 2), Orange is the New Black (Season 4) and Catastrophe (Seasons 1 & 2). When I finished Catastrophe I was itching for another show to start right away.

Holiday Gift Guide 2016: For The Pets

For the seventh and final installment of this year's holiday gift guide we're talking about items for your four-legged friends. Adopting Scout 18 months ago was one of the best decisions of my life and I love to spoil him rotten.