I can't believe it, but this is week 20 of working from home. My company has decided to keep our office closed until at least January 2021, so I am really settling into this routine.

Each week of quarantine I have been sharing a list of TV shows and movies to watch over the weekend. If you missed any of the previous lists, you can find all of them on my TV recaps page.

Before we jump into this week's picks, here are a few upcoming things to add to your calendar:

One more housekeeping item before we dive in. I watched a movie on Netflix called How Do You Know, which co-stars Reese Witherspoon, Paul Rudd and Owen Wilson. Sounds promising, right? Wrong! A complete waste of two hours. The movie originally came out in 2010 (though I don't remember hearing about it at all) and the plot just never really develops.

1. Indian Matchmaking (Netflix) - This is the best show I've watched all month. I binged all eight episodes in two sittings.

It's a documentary-style series that follows a woman named Sima who is a matchmaker. She tries to help Indian families find "the one" for their sons and daughters.

Sima travels all over India and the United States to meet with these families. There are a few stand out singles: Aparna, Nadia and Vyasar. Aparna is in her 30s, lives in Texas, and works as an attorney. She is hyper type A and difficult to please. Nadia works as a wedding planner, lives in New Jersey,and is all-around lovely. Her one wrinkle is that she's self-conscious about her family's history of living in Guyana (not India). Vyasar is also in his 30s, a high school guidance counselor and a lovable teddy bear. His father isn't in his life, which he worries will be seen as a strike against him.

The singles are all hoping for a unicorn, the parents are overbearing and opinionated, and Sima is caught in the middle. It's fantastic.

Two things I really loved: (1) at the start of each episode they interview Indian couples who have been married for 30-50 years. It's very When Harry Met Sally and very cute, and (2) Sima is a deep believer in the zodiac, as am I, and she often turns to her astrologer friends to confirm she's on the right path with a match.

2. Eurovision (Netflix) - Before you scroll right by this, hear me out! I was hesitant to watch Eurovision. I don't tune in to the song contest in real life, so why would I watch this? Two friends urged me to reconsider and I have to say, it's quite fun.

Will Ferrell and Rachel McAdams play childhood friends, who through a series of freak accidents, wind up as finalists in the Eurovision song contest. Their song is catchy and their costumes are amazing.

Demi Lovato makes a few cameos, including a on-stage moment at that beginning that will knock your socks off.

3. Cracked Up: The Darrell Hammond Story (Netflix) - I've seen Darrell Hammond on Saturday Night Live for decades, but I never knew anything about his personal life. This documentary takes you to his hometown, where he shares some shocking truths about his childhood.

Behind the funny man facade, is a person who has endured unimaginable trauma. Hammond shares openly about how he coped with his pain and how he's turning those experiences into ways to help others.

This is heavy, but gives you a completely new appreciation for him as a comedian.

4. Knock Down the House (Netflix) - If you were inspired by Alexandria Ocasio-Cortez's testimony this week, watch her as one of the four women featured in this documentary about the 2018 run for Congress.

I watched it when it first came out last year and was in awe of these women, the communities that rallied around them, and the shared hope for change.

5. Sleepless in Seattle (Netflix) - Without The Bachelor or Bachelor in Paradise this summer, I am feeling a major romance void in my TV watching. I was elated to discover that this classic rom-com is available to stream!

Tom Hanks? Meg Ryan? A relationship that happens mostly over the phone? What could be better right now?

Fun fact: when my sister and I were little, we always had a hard time agreeing on what music to listen to in the car. The Sleepless in Seattle cassette tape was one of the only things all of us were happy with, including my parents. I can still hear that first Gene Autry track, "Back in the saddle again, out where a friend is a friend!"

6. House, M.D. (Amazon) - If you never watched House when it was airing live on TV, now is a great time to try it. Hugh Laurie stars as Dr. Gregory House, an antisocial physician who happens to be a genius at diagnosing patients who seem to a mystery to everyone else.

The show has had so many amazing actors rotate through - Omar Epps, Jennifer Morrison, Olivia Wilde, Lisa Edelstein - the list goes on.

Each episode is about 40-45 minutes. There are eight seasons, with 22-24 episodes each. If you get hooked, you'll have plenty to watch.

There you have it. This week's list! I'll be back next Friday with a fresh round.

END_OF_DOCUMENT_TOKEN_TO_BE_REPLACED 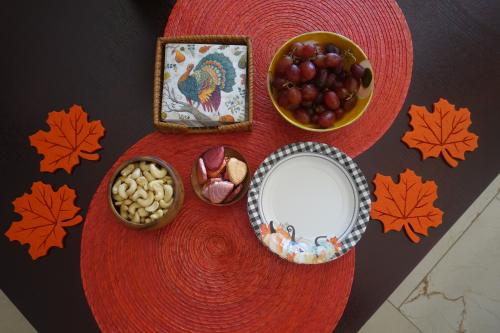 I love decorating for Thanksgiving each year with my mom. Sharing all the details of our setup for Turkey Day 2019.

Looking for the perfect Valentine's Day gift? I've got you covered!