For those who have never been, the Bellagio is the undisputed, most beautiful hotel on the Las Vegas strip. You may recognize it as one of the casinos George Clooney and his gang tried to rob in Ocean's Eleven.

The Bellagio has a gorgeous fountain out front that dances to music every 30 minutes or so. The night we went, the fountain boogied to Michael Jackson's "Billie Jean." Here is the video I took of the performance if you want to move and grove along to this iconic MJ tune.

Inside, the hotel lobby's ceiling is decorated with breathtaking glass flowers created by the famous artist Dale Chihuly. You may remember my posts about his exhibits at the Museum of Fine Arts and the Fairchild Tropical Garden.

In addition to the stunning ceiling, as you walk through the lobby you will make your way to the botanical garden, which is one of the best kept secrets in Las Vegas. Each year the Bellagio horticulturist team puts together four special displays - Chinese New Year, spring, summer and harvest. The 14,000-square-foot space is completely transformed into a vibrant, fragrant wonderland.

When we arrived on Saturday night we watched the fountain show and wandered, wide eyed, through the botanical garden. Olives is located at the very far end of the Bellagio's shopping mall, so we zigzagged our way through the casino and past row after row of shops with glistening jewelry in the windows.

The hostess at Olives was not too friendly, but thankfully we had a reservation and we were right on time. We waited out front for our table, craning our necks around to see if it was crowded inside.

I am obsessed with these tree-shaped candle holders in the dining room. I think the blush pink candles look like cherry blossoms.

We were seated just a few tables in from the front door, in a corner booth overlooking the bar area. I was excited to peek at the menu again. I have eaten at both the Olives in Charlestown, MA (now closed) and this Las Vegas location before, but it's been several years.

While we looked over the menu our waitress delivered us a bread basket with decadent accompaniments! We received three types of bread - focaccia, an onion bread and sheets of crispy crackers - as well as two olive spreads and a dozen Greek olives. Both of the olive spreads were salty and addicting! I would have spread them on anything.

Since we were toasting to our final night in Vegas, we decided to split a bottle of wine. We ordered the Kim Crawford sauvignon blanc, one of my go-to wines. I discovered it at Not Your Average Joe's, actually.

While ordering a whole bottle of wine may seem indulgent, we did some quick math and if we each had two glasses, it worked out to $13 dollars per glass, which is a bargain!

Since we knew we wanted to have dessert at a second location (more on that later) we decided to share a few dishes rather than have a big, multi-course meal.

The first to arrive was the tempura green beans with garlic aioli. The first time I ever had fried green beans was at Legal Harborside in the Seaport and I became an instant super fan. I order them any time I see them on a menu.

The Olives version had just the right amount of batter and the ideal level of crisp. The garlic aioli was rich and creamy and we soaked up every last drop.

We also shared the Greek-style romaine salad which was tomato, cucumber, cracked olives, red onion, a feta phyllo triangle, and oregano dressing. Because our waitress knew we were sharing, she had the chef split the dish onto two plates, which we really appreciated. Each of us even go our own phyllo triangle.

We both agreed that we didn't love that the salad dressing was sauced on the bottom of the plate, making it tricky to get dressing mixed into every bite. That aside, the romaine and the veggies were super fresh and the phyllo triangle was a lovely garnish.

Our third and final dish was the portobello flatbread pizza - wild mushroom purée, herb roasted portobello, red onions, fontina cheese and white truffle oil. Is it just me or is fontina cheese outrageously delicious and perfect for pizza?

The crust on the flatbread was excellent, both chewy and had a slight crisp. The mushroom flavor was that delicious, earthy taste and combined with the creamy fontina cheese, this dish was a winner.

Though our food was tasty as can be, the service was definitely lacking. Despite our section of the restaurant having a few open tables, our waitress was distracted and disappeared sometimes for 20 minutes at a time. Also, the server who was assigned to pour (and keep pouring) our wine made several sloppy pours, leaving significant amounts of wine on the table instead of in our glasses. Thankfully we were in the midst of a catch up session and we didn't really mind the slow pace of the meal, but if we had been rushing to get to a show, I think I would have been pretty heated.

If you live in Boston, you may remember this unflattering article in Boston Magazine directed at chef Todd English, "Dear Todd English: It’s Not Us. It’s You." Our experience at Olives had me thinking about the claims in this piece.

After the check had been paid, we waltzed back through the casino and out on the strip to make our way to The Cosmopolitan. Earlier in the trip I had spotted the Momofuku Milk Bar (which I had been to in New York) and I insisted we have dessert there at least one night.

We both had the cereal milk soft serve with corn flake crunch. I wanted so badly to take a photo for you, but with corn flake bits dripping down my left hand, it was tough to balance the camera in my right! You'll just have to believe me. This breakfast-inspired frozen confection is off the charts!

With very full bellies we wound our way back to Aria. 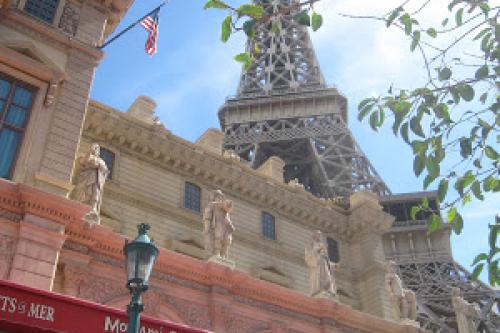 While in Las Vegas earlier this month I fell in love. I fell in love with this view which I had each and every time I left my hotel and walked by the Paris. 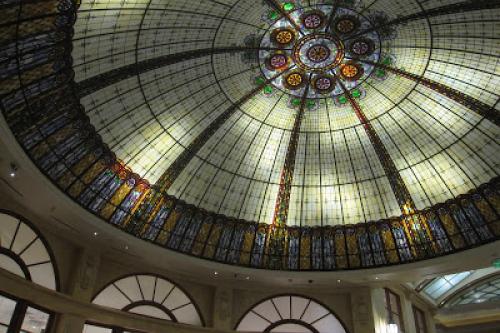 Those who have been reading all week already know that I recently returned from a trip to Las Vegas for work. They may also know that my coworker researched and booked all of our dinners out. We are both vegetarians so she combed through countless menus to find places we could both indulge. On our second night in town we walked to the neighboring hotel, Paris, for dinner at their burger place, Le Burger Brasserie.