When I heard a new restaurant had taken over the space formerly occupied by Rendezvous, I was eager to check it out. The new arrival is Viale, an Italian restaurant co-owned by childhood friends Greg Reeves and Mark Young. Both Greg and Mark used to work at Central Square watering hole Green Street before setting out on this new venture together.

Viale is steps from the Central Square T stop, right in the heart of the neighorbood. They have excellent signage, so you can't miss it.

I arrived a few minutes before my dinner date, but the host was happy to seat me anyway. He was warm and welcoming, a rarity amongst greeters in restaurant these days.

Our table was against the back wall with a view of the whole dining room and the bar to our left. The bar features a deer's head watching over all the cocktails being shaken down below.

Once my friend arrived, we each ordered a drink. The Uinta Hop Nosh Tangerine IPA beer for her and a glass of Malbec from Mendoza, Argentina for me.

A server arrived with a basket of bread and carefully placed one roll on each of our bread plates. The rolls were warm (love that) and had a nice, hearty crust. We ripped each roll into a few pieces and sent them for a swim in the olive oil.

To begin, we decided to share two appetizers. The first dish we tried was the Italian burrata with shaved green tomato, pistachio crumble and saba.

I was expecting the burrata to be creamy, but it was actually quite firm. The cheese paired very nicely with the pickled taste of the tomatoes and the crunch from the pistachios.

Our second starter was the saffron arancini stuffed with provolone cheese over spoonfuls of farm greens pesto.

This dish was fantastic. I would come back to Viale just to eat this arancini again. The outside had a light crisp to it, but when you cut into the risotto ball, melted cheese came oozing out (in the best way). Each rice ball had just the right amount of saffron flavor without it ever feeling overpowering. The pesto was incredibly fresh and took the dish up another notch.

For an entree, my friend ordered the potato gnocchi with wild boar bolognese, grana and rosemary.

After several bites, I asked how she was enjoying the dish and she replied, "This is very delicious. The sauce tastes like tart tomatoes mixed with garlic and balsamic. It definitely tastes like the boar was cooked in the sauce. The meat had a texture almost like pulled pork." She had ordered the half portion and added, "Getting the full size portion of this would have been out of control. It's quite filling."

I decided to go with a half portion of the chitara pasta topped with cherry tomato arrabbiata, corn and local greens.

The pasta was cooked al dente, which was nice because the veggies mixed in with it were all prepared in such a way that they were very soft. I definitely enjoyed the summer tomatoes, but I was wishing for a little more kick. The word "arrabbiata" usually connotes spicy, but this dish didn't bring the heat.

Before we started eating, I was sure we'd order dessert, but by the time our pasta plates were cleared, we were both way too full. We still looked at the dessert menu which had affogato, chocolate-almond semifreddo, angel food cake topped with lemon curd and strawberries and a peach crostada.

When the check was delivered to our table it came in a tiny, Viale-branded pizza box. How cute is that?

While I really loved the saffron arancini, my entree was disappointing. Also, our waiter for the evening wasn't friendly and always seemed to be rushing away from our table. I think the next time I visit Viale I'll join the deer over at the bar.

I think i'd have been disapointed right off the bat by the looks of that buratta. your last comment is cracking me up!

The burrata was definitely a bust, but the arancini made up for it. Glad my closing line made you chuckle! 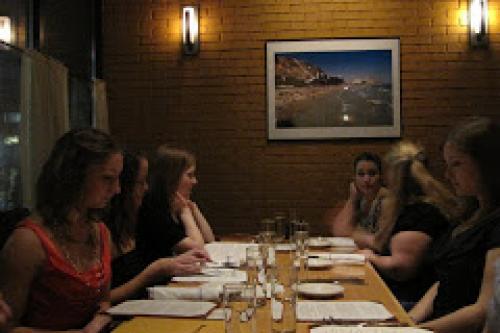 Last night I celebrated the birthday of one of my best friends. 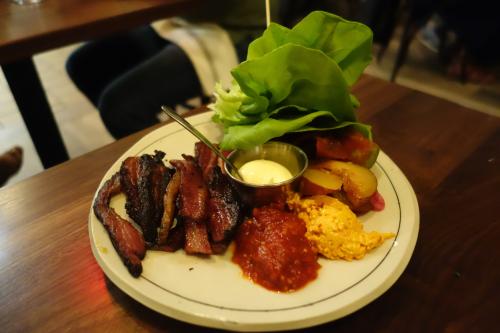 Since it first opened I have been wanting to check out Little Donkey in Central Square in Cambridge. The restaurant is a collaboration between two of Boston's best chefs, Ken Oringer and Jamie Bissonnette. The chefs are also partners in two other Boston hot spots, Toro and Coppa (both in the South End).  Little Donkey is located in the heart of Central Square, right on Massachusetts Avenue. In the nice weather, the bar windows are open to the street. 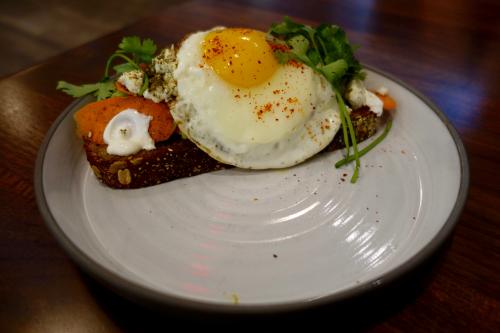 Back in October I took my first trip to Little Donkey in Central Square in Cambridge, the latest collaboration between Boston super chefs Ken Oringer and Jamie Bissonnette. I went for dinner and I have to admit, I was a little underwhelmed.  This week, when a friend suggested we escape the office and try Little Donkey's lunch menu, I was skeptical. When I visited the website and saw the lunch menu was truly a different set of offerings than dinner, I started to feel optimistic.