If you haven't been hearing about "Orange Is The New Black" then you're living under a rock. Though it debuted a few weeks ago, the Netflix-only series has recently been picking up steam.

I've been a Netflix subscriber since the early days - we're talking 2001. It's been fun to watch the site evolve, including these new original programs. "House Of Cards" was a big success this winter, and "Orange Is the New Black" is the second attempt to hook customers with exclusive series.

I wasn't going to watch "Orange Is The New Black" because, well, it's about prison. Life is hard enough, no?

Then everyone around me starting raving about it - family members, co-workers, people on the train . . . you name it, they're watching it.

After watching the first episode, I was totally hooked. I couldn't believe it! I think part of the appeal is that we've all wondered what it would really be like to go to prison and "Orange Is The New Black" shows you everything - the corruption, the violence, the racism - it's all there.

Actress Taylor Schilling plays the leader character, Piper. Piper was once involved with a drug dealer (her girlfriend at the time) and winds up being turned in to the police a decade after she committed the crime. 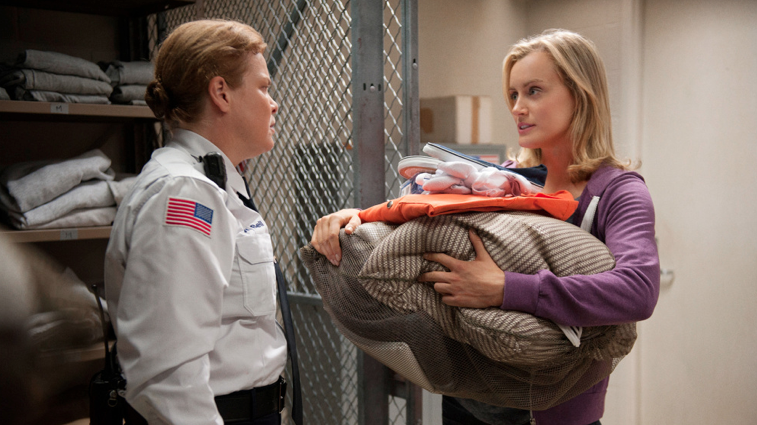 Piper has to leave her fiancé (played by Jason Biggs) to go to prison. I love Jason Biggs in this role. You sympathize with him as he tries to stay loyal to his girl. This is the first time I've seen Biggs in a role where I didn't constantly think of him as Jim from "American Pie." 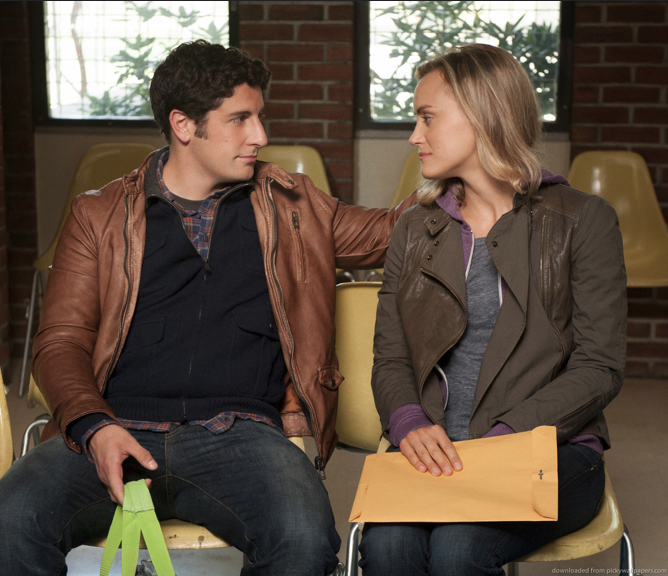 The prison has the most outrageous cast of characters. I could do an entire series of blog posts about each of the leading ladies. They all have fascinating back stories, which we learn through flashbacks.

Of all the supporting characters, my favorite is Crazy Eyes, played by actress Uzo Aduba. If she doesn't receive an Emmy nomination, there is no justice in the world. 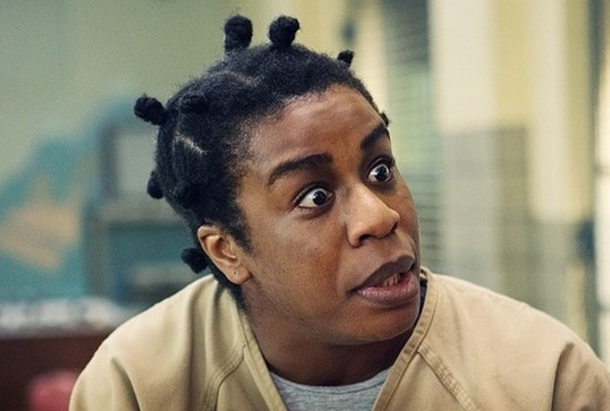 Also, the show is created by Jenji Kohan, creator of "Weeds," and she cast a "Weeds" alum, actor Michael Harney. I loved him as Shane's mentor on the police force in "Weeds" and I love him now as Officer Healy.

The first season of "Orange Is The New Black" has 13 episodes and they are all available to stream (hello, binge watching). I watched an episode or two a night for the last two weeks and I was always disappointed in myself when I fell asleep.

Last night I watched the final episode and the last two minutes were so intense! I can't wait to see where things pick up in season two.

Interestingly, I didn't know until a few days ago that this series is based on a memoir by Piper Kerman with the same title. Now I want to read the book to see what has been changed for the show.

Are you as addicted as I am?

I just started watching it a few weeks ago, but I've been so busy with school that I'm only 4 or 5 episodes in. Am I supposed to be rooting for Piper? I can't really decide. I'm more interested in the politics of prison - especially when it's all women. I mean, women are brutal to each other as it is, so in confined quarters? Yikes. I like it, but don't love it (yet).

I think one of the things I like most about it is that you don't know if you want to root for Piper. One minute you do and one minute you want to see her go down. The politics of the prison are undisputedly the most fascinating part. The back half of the season is far superior so definitely keep going!

A very awesome blog post. We are really grateful for your blog post. You will find a lot of approaches after visiting your post. skunk river outfitters

I was surfing the Internet for information and came across your blog. I am impressed by the information you have on this blog. It shows how well you understand this subject. blue grass board sports

Thanks for taking the time to discuss this, I feel strongly about it and love learning more on this topic. andrea rose

I like your post. It is good to see you verbalize from the heart and clarity on this important subject can be easily observed... eco finance

Thanks for taking the time to discuss this, I feel strongly about it and love learning more on this topic. red necks revenge

I like your post. It is good to see you verbalize from the heart and clarity on this important subject can be easily observed... winchester speedway online

Took me time to read all the comments, but I really enjoyed the article. It proved to be Very helpful to me and I am sure to all the commenters here! It’s always nice when you can not only be informed, but also entertained! fight force

I was surfing the Internet for information and came across your blog. I am impressed by the information you have on this blog. It shows how well you understand this subject. friendship village south

Many creators talk about the freedoms offered by television's new platforms, but Kohan is one of the few to snatch those freedoms, stuff them in a bag, and take off on a wild joyride like this. Get the latest updates on all news regarding your favorite 5v5 MOBA game - Mobile Legends: Bang Bang. Be it the latest patch notes, the release of new characters, or the newest in-game events, our dedicated team is here to bring you the most up-to-date information. Did you know there is also a chat option that lets you interact with other online players? Once you get to Level 5, this option becomes available to you.

This is my first time visit here. From the tons of comments on your articles,I guess I am not only one having all the enjoyment right here! Ly The Dung

END_OF_DOCUMENT_TOKEN_TO_BE_REPLACED 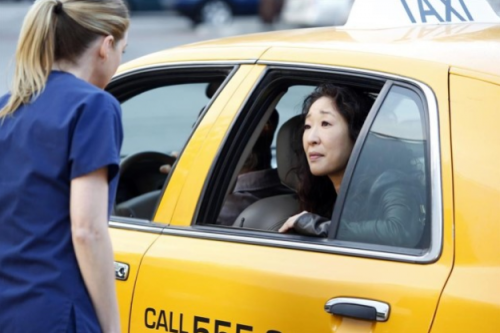 Grey's Anatomy: We Have To Dance It Out

Normally we wake up on Thursday mornings excited for a new episode of Grey's Anatomy. Sadly, this week we'll be reminded that our favorite show is on summer hiatus. Sigh. Last week I was traveling for work and was unable to watch the season finale live. To help ease you into the Grey's off season, today I'm sharing my recap of last week's episode. If you can't watch a new episode tonight at least you can talk about the last one, right? 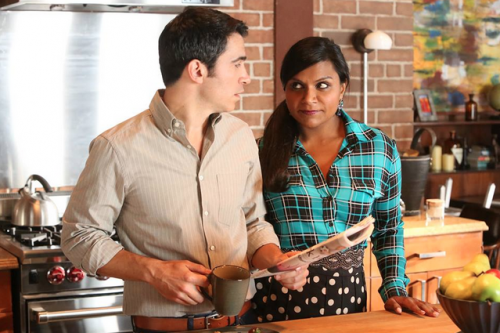 The Mindy Project: The Suitcase

When I woke up Tuesday morning I was depressed that my birthday was over. It had been such a fun celebration and I wasn't ready for things to go back to they way they were - lacking presents and cake. Then I remembered something, "The Mindy Project" would be on. That factoid turned my frown upside down! I got home from dinner last night and clicked through the DVR until I found the new Mindy episode. It was titled, "Crimes & Midsemeanors & Ex-BFs." Without even watching a single minute, I knew it would be great!