Let's start with Ivy and Raj. Though I completely agree with Ivy that Raj faking his own drowning was uncool, I was thrilled to see her get back in the water! Did you notice the song playing during the surf competition? One of my favorites - "The Seed" by the Roots!

I hope Ivy does get sponsored by Hurley and gets to travel the world. What do you think Raj's diagnosis will be when he finally goes to the doctor for his check up?

How painful was it to watch Silver in her manic state? That blood red hair color was blinding and her incessant voicemails for the NYU alum? Yikes! I wonder how much longer she'll be in this crazed dimension before she (or Navid) realizes something is up.

I feel badly for Annie that just as she was starting to develop a sincere friendship with Marla, it was revealed how sick she may really be. When Annie found those pamphlets at the end of the episode my heart sank. Will the writers goes cheesy on us and have Annie "save" Marla's will to live?

Last, but certainly not least, I loved the Naomi and Max story line this week. It was fun to see Naomi in a jealous fit of rage. You knew Max really cared for her when he took her answer during the competition over his teammate. Though she was wrong and cost him the title, he still wanted to be with her. How cute was it in the final scene when they are walking down the hall, him in the black Gucci shirt and her in his "Geology Rocks" t-shirt? Love. 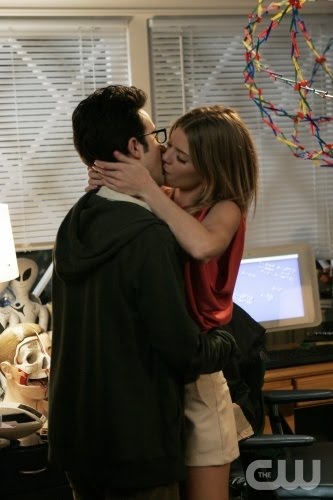 In previews for next week's episode it looks like many of the supporting cast members return - Aunt Becky, Laurel and Mr. Matthews. 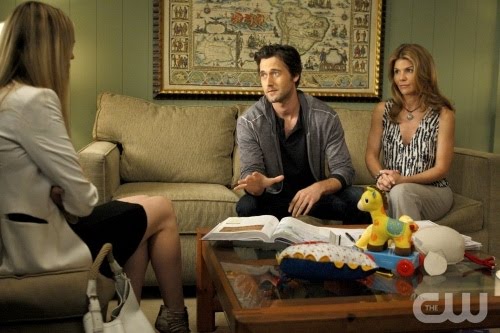 See you next week at West Bev!

I like this post,And I guess that they having fun to read this post,they shall take a good site to make a information,thanks for sharing it to me. Sean Tissue

Thanks you very much for sharing these links. Will definitely check this out.. Nina Vaca

This is a great inspiring article.I am pretty much pleased with your good work.You put really very helpful information. Keep it up. Keep blogging. Looking to reading your next post. Sean Tissue

This is really a nice and informative, containing all information and also has a great impact on the new technology. Thanks for sharing it, Nina Vaca

Thanks for sharing the info, keep up the good work going.... I really enjoyed exploring your site. good resource... Sean Tissue

Nice to read your article! I am looking forward to sharing your adventures and experiences. Nina Vaca

Thanks for sharing this useful info.. Sean Tissue

Thanks for sharing us. Nina Vaca

This is my first time i visit here and I found so many interesting stuff in your blog especially it's discussion, thank you. commercial window cleaners

Thanks For sharing this Superb article.I use this Article to show my assignment in college.it is useful For me Great Work. smm panel

I have read your blog it is very helpful for me. I want to say thanks to you. I have bookmark your site for future updates. James River Capital

I'm glad I found this web site, I couldn't find any knowledge on this matter prior to.Also operate a site and if you are ever interested in doing some visitor writing for me if possible feel free to let me know, im always look for people to check out my web site. book skip hire

I appreciated your work very thanks IT support Kent

I read that Post and got it fine and informative. moving costs calculator

I just couldn't leave your website before telling you that I truly enjoyed the top quality info you present to your visitors? Will be back again frequently to check up on new posts. James River Capital

I love the way you write and share your niche! Very interesting and different! Keep it coming! Yanni Hufnagel

Great job for publishing such a beneficial web site. Your web log isn’t only useful but it is additionally really creative too. There tend to be not many people who can certainly write not so simple posts that artistically. Continue the nice writing Yanni Hufnagel

I know your expertise on this. I must say we should have an online discussion on this. Writing only comments will close the discussion straight away! And will restrict the benefits from this information. James River Capital

I really loved reading your blog. It was very well authored and easy to undertand. Unlike additional blogs I have read which are really not tht good. I also found your posts very interesting. In fact after reading, I had to go show it to my friend and he ejoyed it as well! Yanni Hufnagel

Nice blog and absolutely outstanding. You can do something much better but i still say this perfect.Keep trying for the best. HCR

Nice post! This is a very nice blog that I will definitively come back to more times this year! Thanks for informative post. HCR Wealth Advisors

Thanks for taking the time to discuss this, I feel strongly about it and love learning more on this topic. If possible, as you gain expertise, would you mind updating your blog with more information? It is extremely helpful for me. Yanni Hufnagel

I am very much pleased with the contents you have mentioned. I wanted to thank you for this great article. HCR

This article gives the light in which we can observe the reality. This is very nice one and gives indepth information. Thanks for this nice article. Yanni Hufnagel

This article gives the light in which we can observe the reality. This is very nice one and gives indepth information. Thanks for this nice article. HCR Wealth Advisors

I admire what you have done here. I like the part where you say you are doing this to give back but I would assume by all the comments that this is working for you as well. dumpster rental rhode island

Your blog provided us with valuable information to work with. Each & every tips of your post are awesome. Thanks a lot for sharing. Keep blogging.. Locksmith Norfolk

I recently found many useful information in your website especially this blog page. Among the lots of comments on your articles. Thanks for sharing. vpnchef

Hello, I have browsed most of your posts. This post is probably where I got the most useful information for my research. Thanks for posting, maybe we can see more on this. Are you aware of any other websites on this subject. Spotify Marketing

Nice post. I was checking constantly this blog and I am impressed! Extremely helpful information specially the last part I care for such info a lot. I was seeking this particular information for a very long time. Thank you and good luck. SEO Studz

Great things you’ve always shared with us. Just keep writing this kind of posts.The time which was wasted in traveling for tuition now it can be used for studies.Thanks vpnhut

thanks this is good blog. thegramhack

this is really nice to read..informative post is very good to read..thanks a lot! ppe

it was a wonderful chance to visit this kind of site and I am happy to know. thank you so much for giving us a chance to have this opportunity.. motorcycle tours india

The Wink Bar is a home based salon that specializes in customized eyelash extensions. It was created with a vision to make every woman feel special & beautiful. The Wink Bar recognizes that having eye lash extensions is an expensive luxury to maintain, thus it ensures that prices are kept affordable. It also maintains a strict hygiene policy. Set in a cosy & personal ambience, the clients are always assured of their privacy. Volume eyelash

Great article with excellent idea!Thank you for such a valuable article. I really appreciate for this great information.. Installing HP wireless printer

I am happy to find your distinguished way of writing the post. Now you make it easy for me to understand and implement the concept. Thank you for the post. http://www.agenbola777.id/

I really loved reading your blog. It was very well authored and easy to understand. Unlike other blogs I have read which are really not that good.Thanks alot! telefon dla kobiety

That appears to be excellent however i am still not too sure that I like it. At any rate will look far more into it and decide personally! ffp3 respirators

I am very enjoyed for this blog. Its an informative topic. It help me very much to solve some problems. Its opportunity are so fantastic and working style so speedy. Best new home Plastering launceston

Thank you so much for the post you do. I like your post and all you share with us is up to date and quite informative, i would like to bookmark the page so i can come here again to read you, as you have done a wonderful job. Daftar Wededomino

i am for the first time here. I found this board and I in finding It truly helpful & it helped me out a lot. I hope to present something back and help others such as you helped me. Sonido De Tormenta De Nieve Para Dormir

Resurge is actually the globe's distinguished anti-aging sort of nutritional process. It works on the Weight Loss Formula. It takes action such as Sleep Support Supplement at the same time. This Supplement is developed Through Dr. John Barban by using 100% Natural Ingredients without posing any one of the adverse effects. It particularly targets the true and real trigger for those people that are experiencing baffling weight gain. Visit the official website here : https://zobuz.com/resurge-reviews-benefits-studies/1959/

Wow, cool post. I’d like to write like this too – taking time and real hard work to make a great article… but I put things off too much and never seem to get started. Thanks though. curp gratis

Thank you for some other informative website. The place else may just I get that kind of information written in such a perfect method? I have a venture that I am simply now running on, and I’ve been at the glance out for such info. Creolen

END_OF_DOCUMENT_TOKEN_TO_BE_REPLACED

Merry Christmas! Sharing lots of TV and movie recommendations for the holiday weekend.

It's been a great week for new TV. Sharing thoughts on season four of The Marvelous Mrs. Maisel, the new Hulu show The Dropout, and HBO's Winning Time about the LA Lakers in the 1980s.

This week, I'm obsessing over the Netflix show Maid, and asking why Dear White People's newest season had to have so many musical numbers.