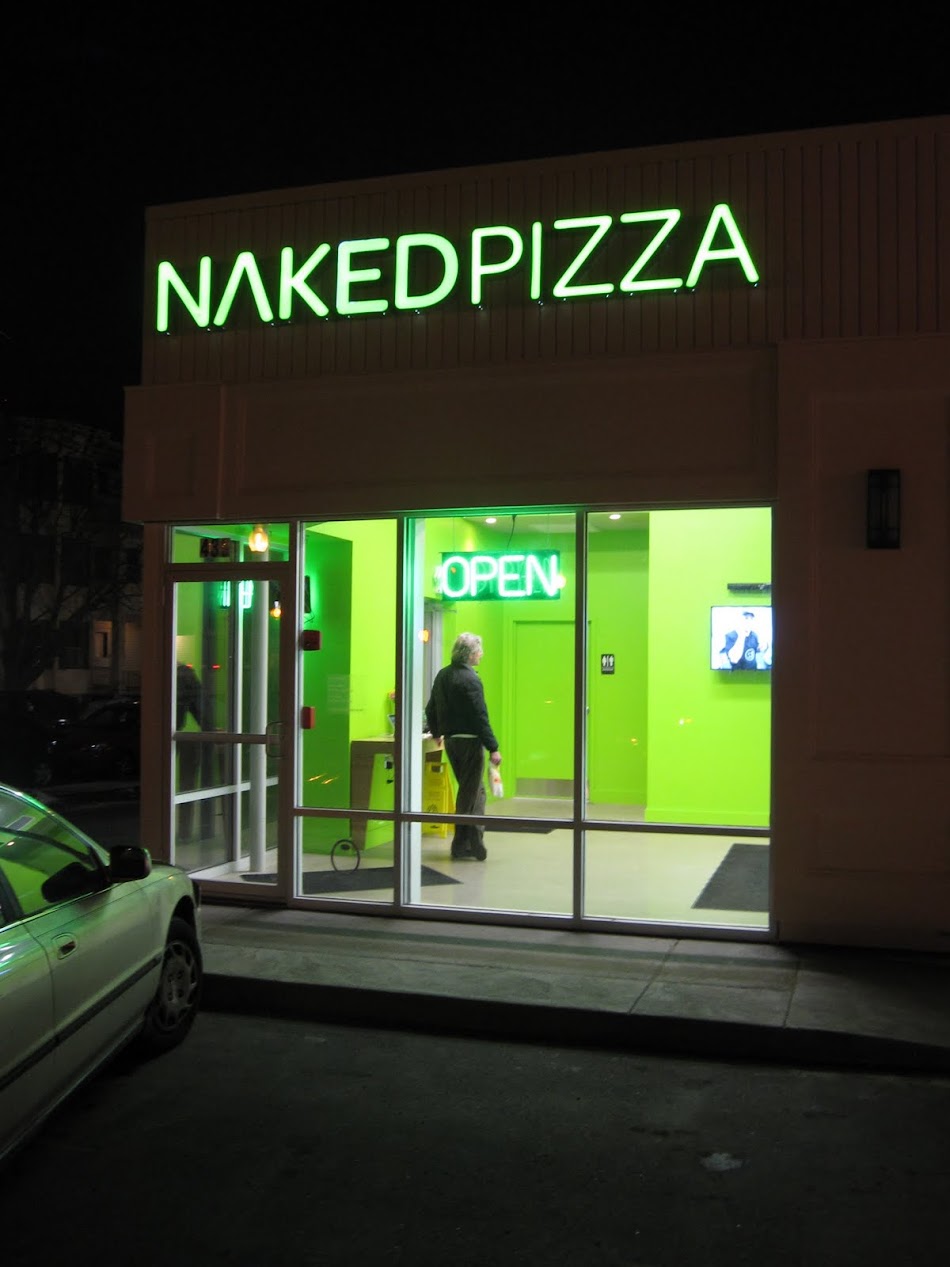 I have lived in Brighton Center for almost three years and during that time there has always been a vacant lot next to the CVS on Washington Street. A few weeks ago I noticed a construction crew on the empty lot and shortly after there was a sign on the new space that read "Naked Pizza."

Soon after spotting the sign I received a flyer in my mailbox saying Naked Pizza would be opening soon and listing their Facebook and Twitter pages. Naturally I began following. I noticed right away that all of their marketing plays on the word "naked." I can't even imagine how much spam they get! 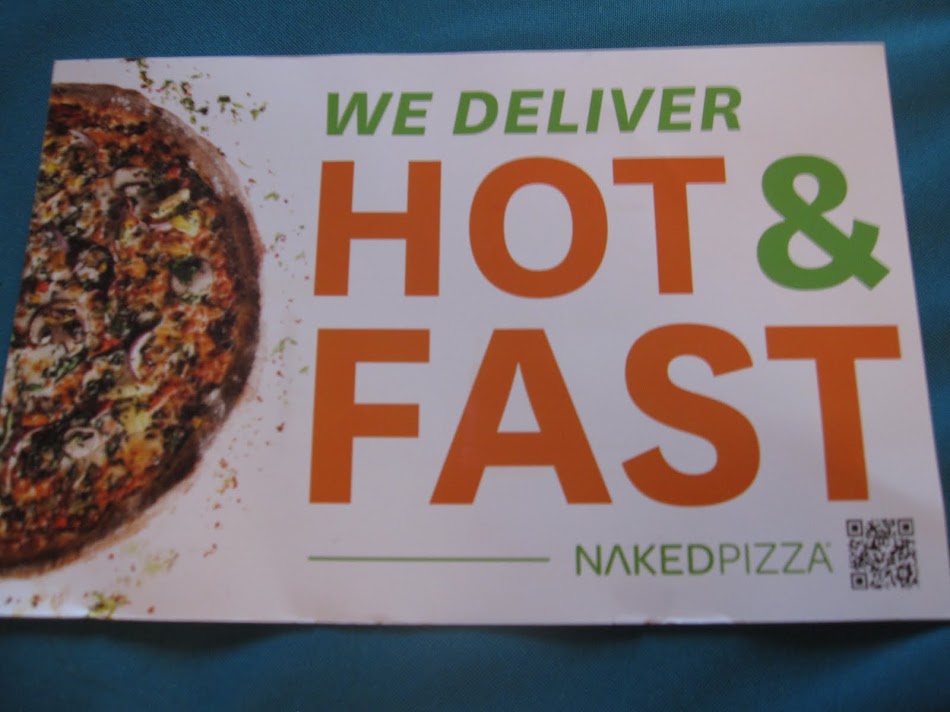 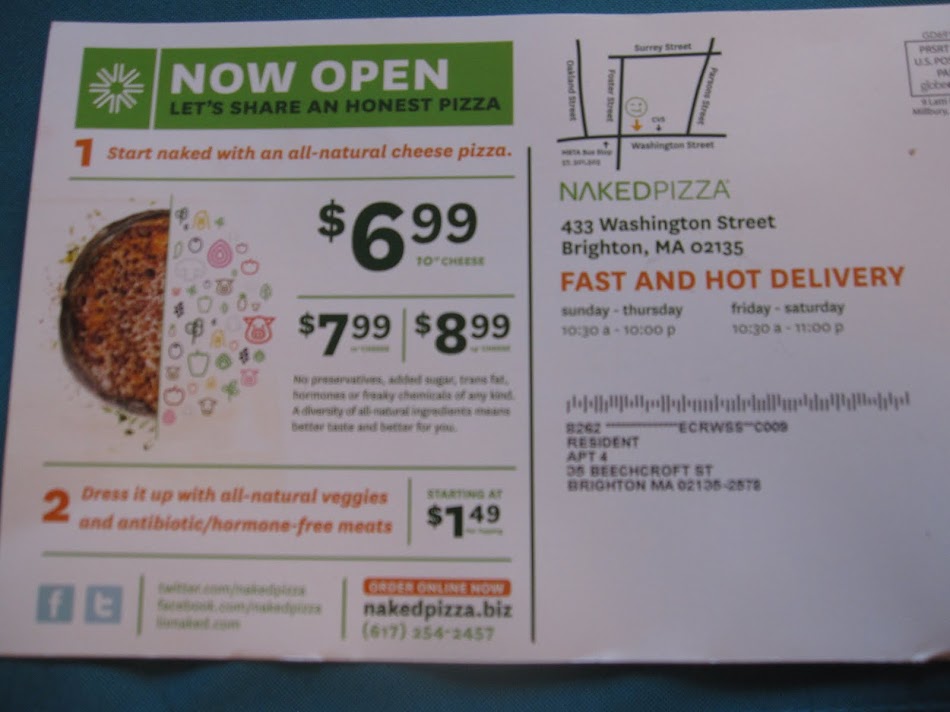 Two weeks ago driving through Brighton Center I saw a huge, illuminated sign in the Naked Pizza window that said "open." I was ecstatic and tweeted "Just drove past @nakedpizza in #Brighton Center and it looks open! Can't wait to try it!" Within minutes, the store replied back! I was incredibly impressed!

I'm not the only person who is impressed by Naked Pizza's customer engagement strategy via social media. A blog I read daily for work, BostInnovation, wrote a story called "Naked Pizza: The Social Media Company That Sells Pizza Opens a Boston Location" praising the company's social media efforts. I tweeted BostInnovation to share my enthusiastic agreement for their assessment and Naked Pizza replied to me again! Superb.

Meanwhile, I was trying to find a time to actually go in and test out the place! Last night I finally checked it out!

One of my college besties and I sat down in front of the computer to check out Naked Pizza's menu and decide what to order. The website is fantastic! It has an easy to navigate lay out, and a hilarious visualization of the menu. Check out how they list the veggie and meat topping choices: 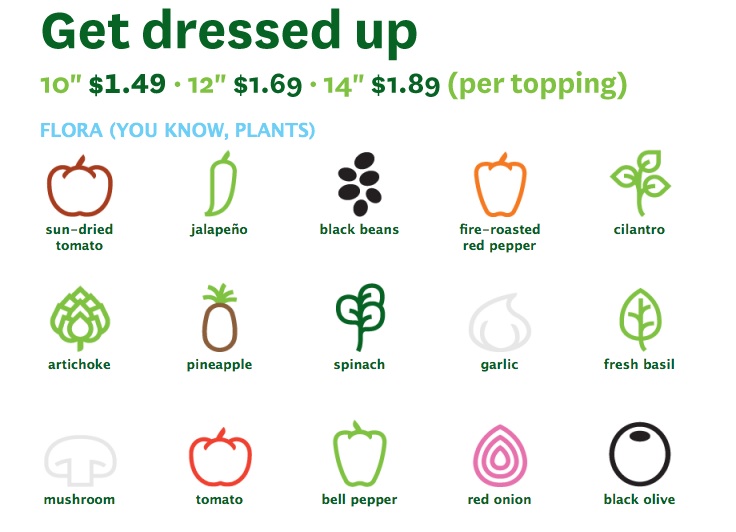 I found it a bit odd that they don't offer broccoli, which is one of my favorite pizza toppings. After much discussion, we decided to go with one speciality pie and create one of our own. We dialed in the order and they told us it would be 15 minutes.

We headed up the street to pick up the order and it was ready and waiting. The store has the same fun vibe as the website with super bright green walls. There are no tables and chairs, but there is a counter with two iPads you can play with while you wait. How cool is that? I love that they put pizza "wallpaper" on the home screen! 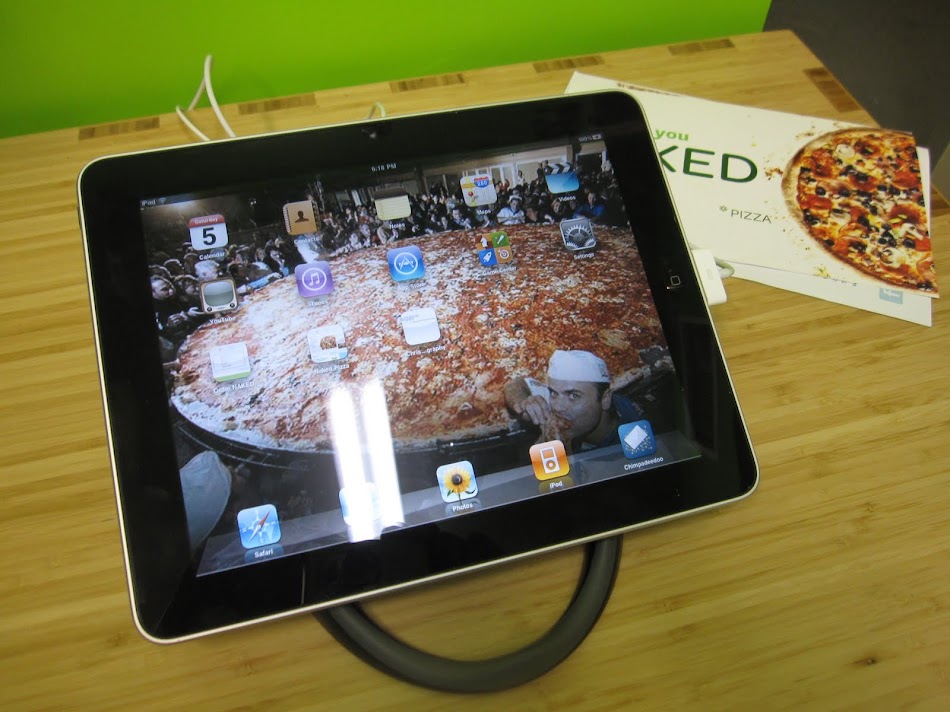 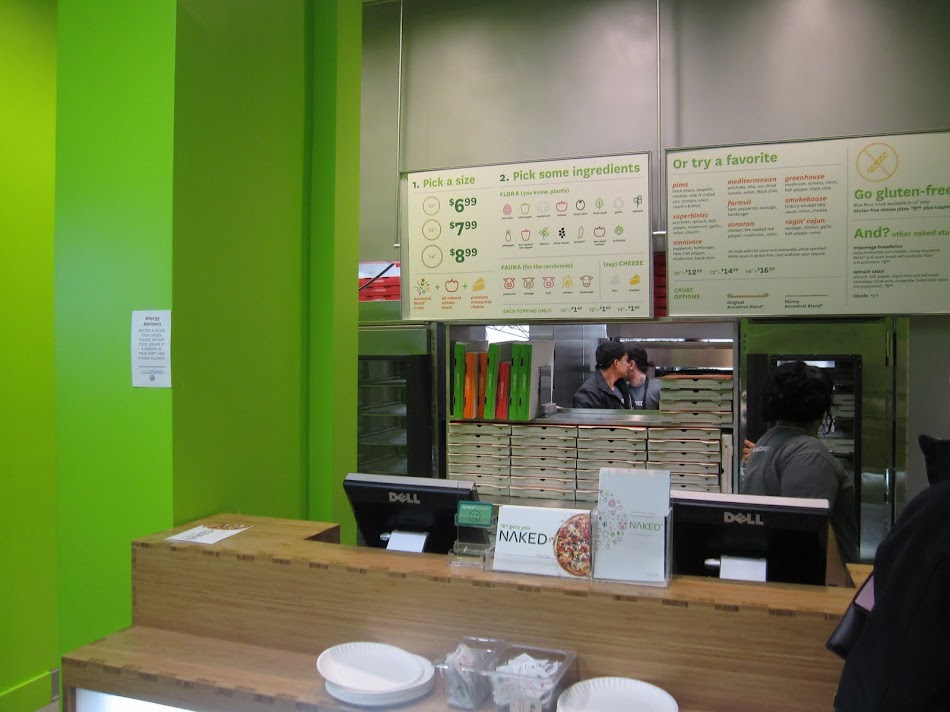 I would be thrilled if Naked Pizza would consider putting in a small counter with three or four stools so people could sit and eat. I also think when the weather gets nicer they should put tables and chairs outside in their enormous parking lot in front of the store. Pretty please, consider it!

We grabbed the bright orange boxes and headed home to dive in! 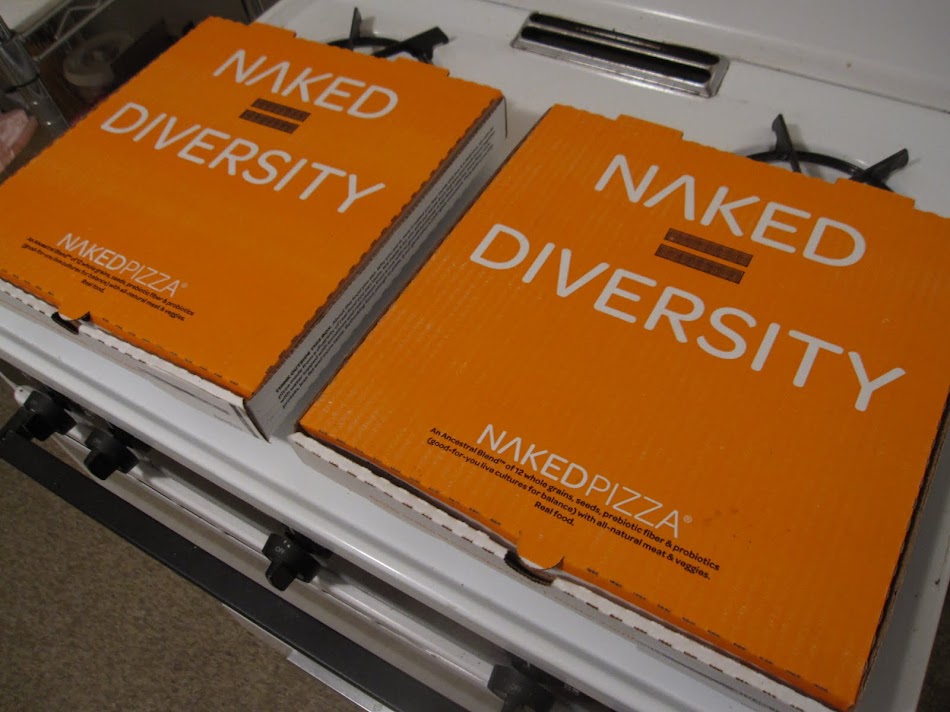 The first pizza we ordered was a house specialty called the Pima. It has black beans, jalapenos, cheddar cheese and a side of pico de gallo. It's basically nachos in pizza form and it was spectacular! One of the best pizzas I have ever tasted in my life. 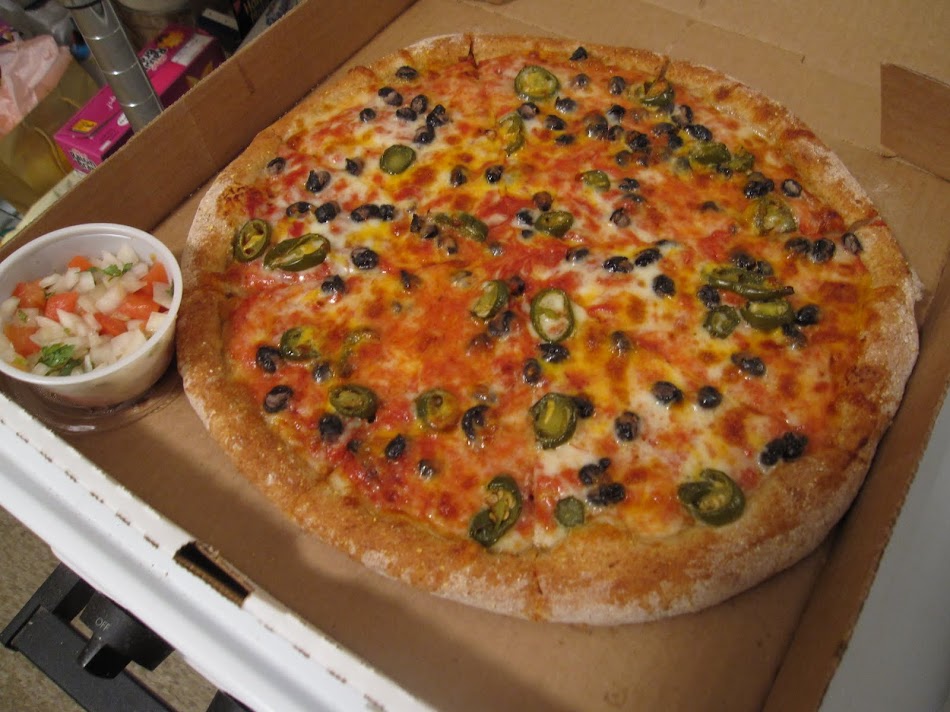 Our second pick was one we created ourselves with feta cheese, garlic and spinach. While the pie had a generous helping of feta and garlic, they skimped on the spinach. There wasn't even one leaf of spinach per slice! Despite that, it was incredibly delicious. 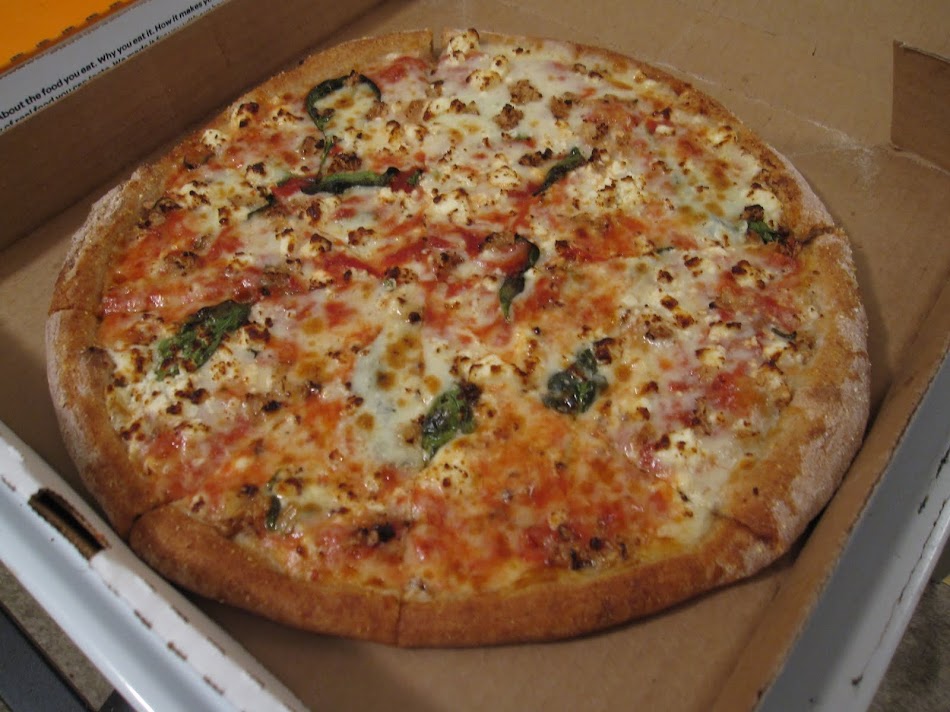 As far as Boston pizza goes, I've always been an Upper Crust girl. I have to say, I think I've been converted. Be sure to follow Naked Pizza on Twitter @NakedPizza and @NakedPizzaBos. You can also "like" them on Facebook.

What are you waiting for? Get Naked.

PS: If you need another reason to convert, please tell me you're up to speed on the Upper Crust controversy regarding their workers? Naked sounds like the way to go for more reasons than one :)

Pizza is the best junk food that is now a days more common among the children especially. Gradually there is the need of essayshark.com reviews the link that can cause the different recipes to do. 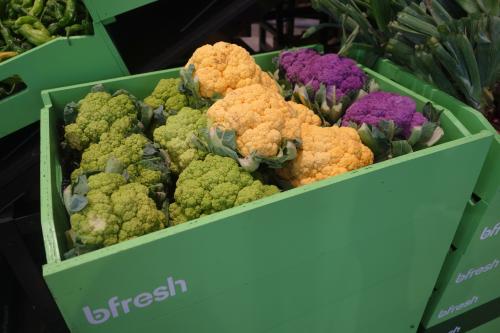 Though I don't cook, I have always loved grocery shopping. Growing up, my dad went to the super market every Saturday morning and I would accompany him. When I was little, I would ride in the front of the cart and as I got older, I would stand on the back of the cart as we went aisle by aisle. I have know idea why I thought riding on the back on the cart was so cool, but I did. In those pre-teen years I used to try and sneak things into the cart without him noticing (mostly Poptarts). 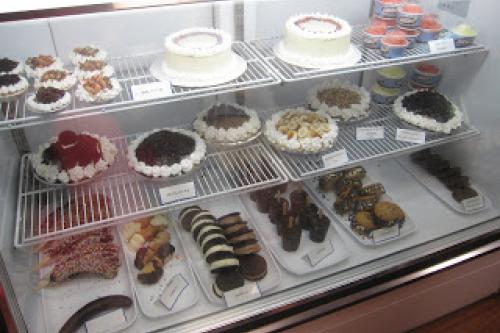 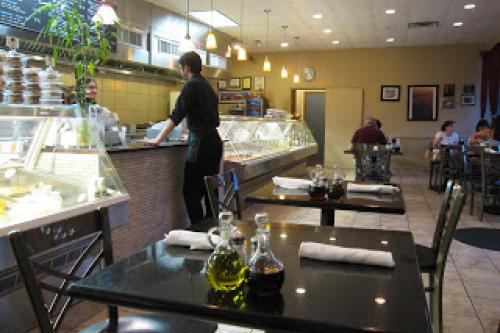