Each year I host an Academy Awards viewing party and this year I was particularly excited, as I had seen most of the nominated films. Let's start with what I loved about the show:

- Cate Blanchett commenting "that's gross" after viewing the clip from "The Wolfman" as she presented the award for Best Make Up.
- Anne Hathaway's blinged out heels during her musical number. Please express ship those to me.
- The auto-tuning of four films (Harry Potter, Toy Story 3, The Social Network and Eclipse). I have to say, I was laughing out loud during "The Social Network" auto-tune. Please enjoy:

- Jeff Bridges presenting the award for Best Actress and queuing up each clip with an ode to the nominated actresses. He spoke to each woman as if he were sincerely her friend.
- Sandra Bullock following in Bridges' footsteps with an equally authentic tribute to each of the nominees for Best Actor. It's mind blowing to remember where she was exactly one year ago and to see her composure tonight.
- PS22 closing the show with "Somewhere Over The Rainbow." First of all, "The Wizard of Oz" is my all time favorite movie. Secondly, how amazing for those elementary school kids from Long Island to fly to Los Angeles and perform during Hollywood's biggest night? Wow.
- Lastly, I never watch live TV (thank you, DVR) but tonight I was able to experience commercials I would otherwise miss. I absolutely loved the McDonald's "hope" commercial. How cute were those kids? "I don't see any hope in here!" they exclaimed as they shook the Happy Meal box. Beyond adorable. I also died during the preview for this week's episode of Modern Family! The Pritchetts play charades? Yes, please.

Now onto the disappointments during tonight's show:

- The hosts. Anne Hathaway seemed jittery and insincere and James Franco looked stoned. I am normally a huge James Franco fan, but I wanted to shake him! He honestly looked high.
- Kirk Douglas presenting the award for Best Supporting Actress. He was difficult to understand, he delayed announcing the winner even after he'd opened the envelope, and then Melissa Leo increased the awkwardness by stealing his cane when they walked off stage together!
- Katherine Bigelow, last year's Best Director winner, came out in a red dress that made her look like an escapee from the "Let's Get Physical" video. Yikes.

And onto the fashion! In the past I have compiled a best and worst dressed list, but this year I wanted to highlight my four favorites, who were all wearing red!

1) Sandra Bullock - As I mentioned before, at this time last year Bullock was walking the red carpet in a stunning Marchesa gown, with her then husband Jesse James and she won the award for Best Actress. To see her tonight, positively radiant despite all she has been through was nothing short of inspiring. This incredible gown is Vera Wang. 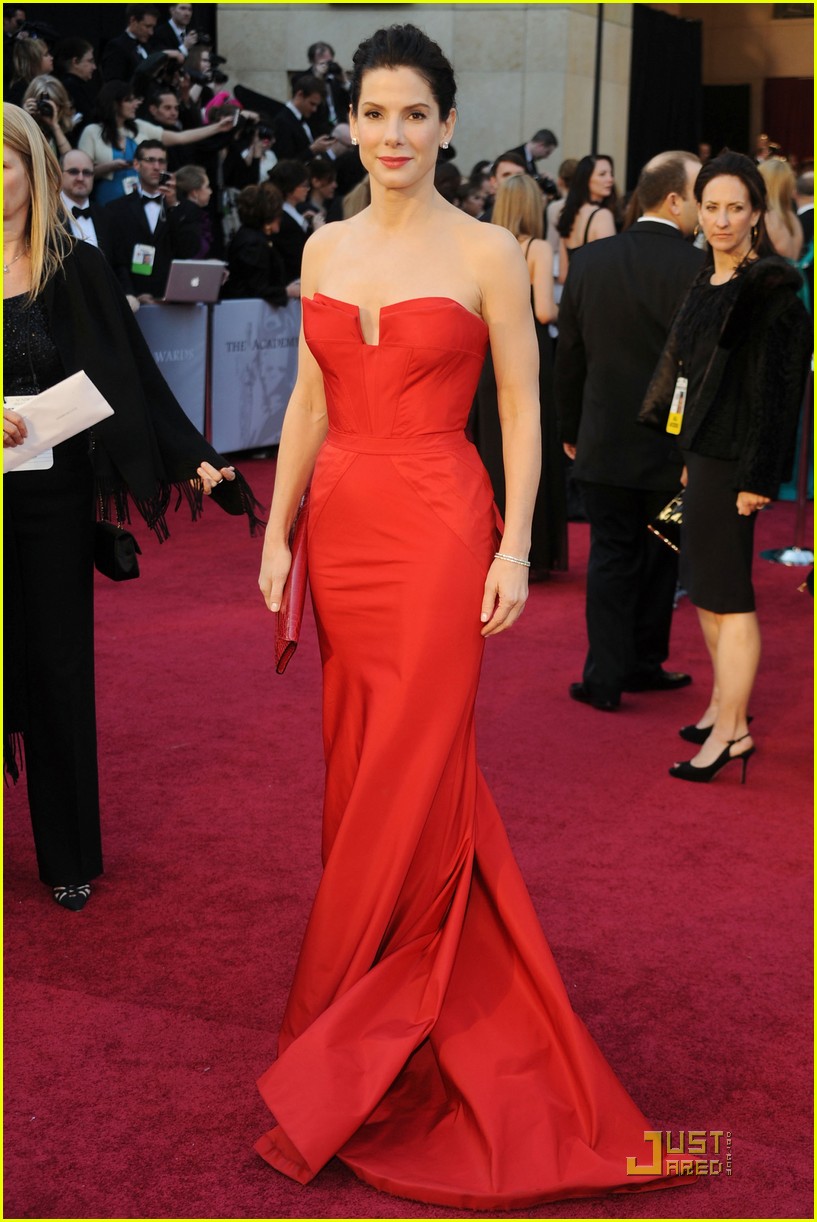 2) Jennifer Lawrence - The newcomer and star of "Winter's Bone" stole the show in this red, Calvin Klein, body-hugging number. She looks like Farah Fawcett meets Baywatch, and I mean that in the best way. 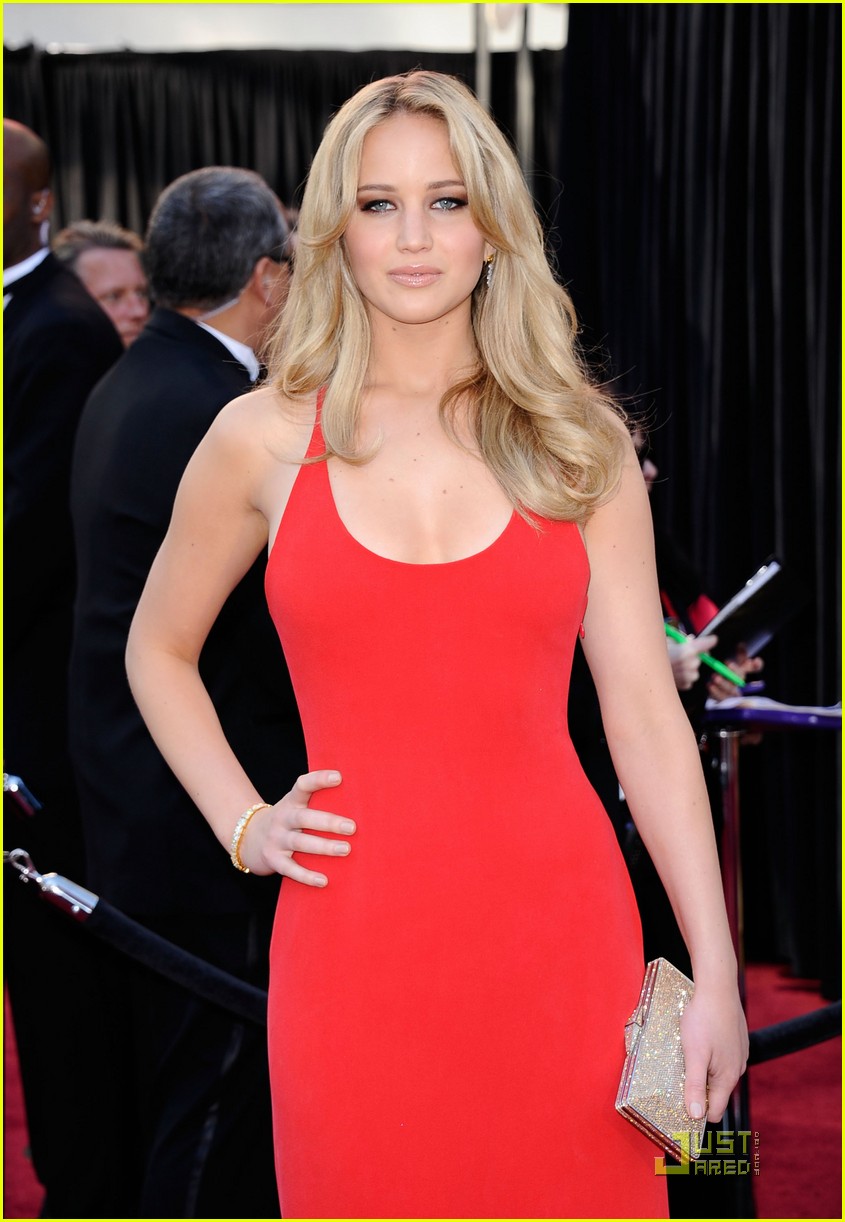 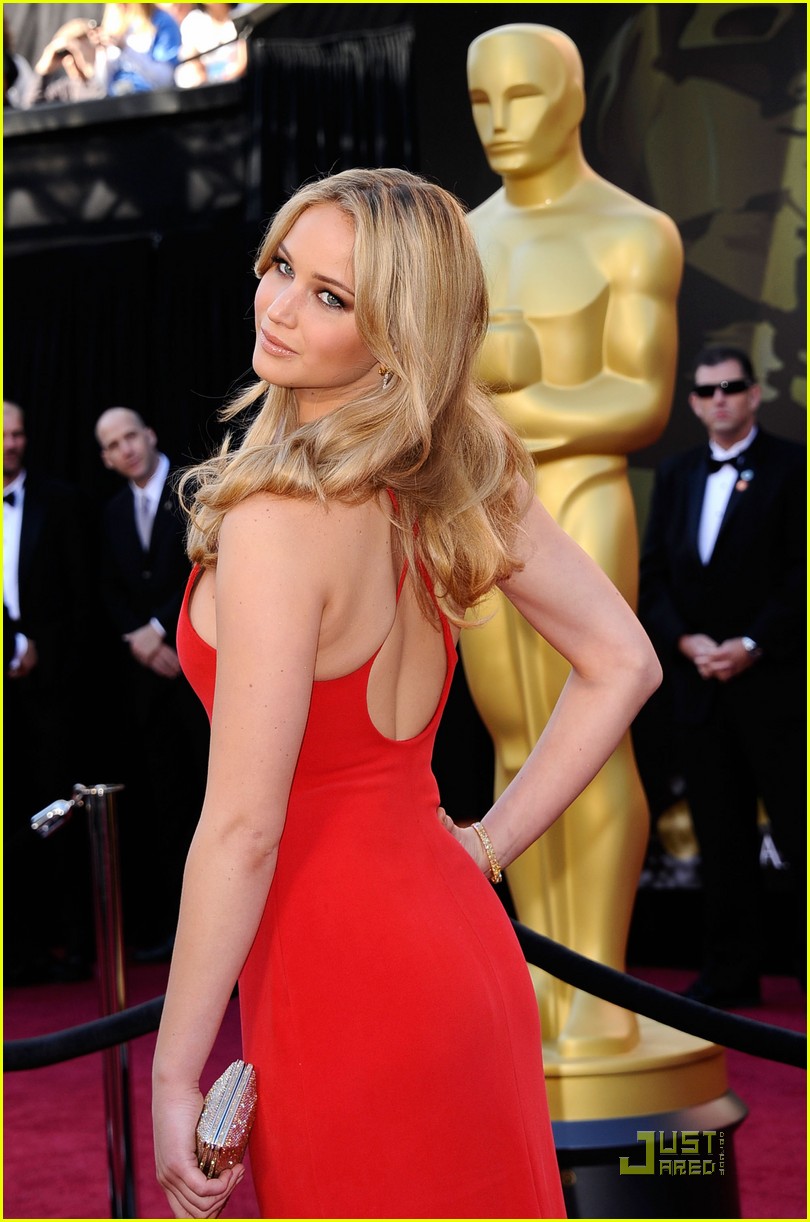 3) Penelope Cruz - After having a baby yesterday (at least it feels that way) Cruz was on fire in this sequined, red, L'Wren Scott dress. She also had the ultimate accessory, her nominated husband, Javier Bardem. Caliente! 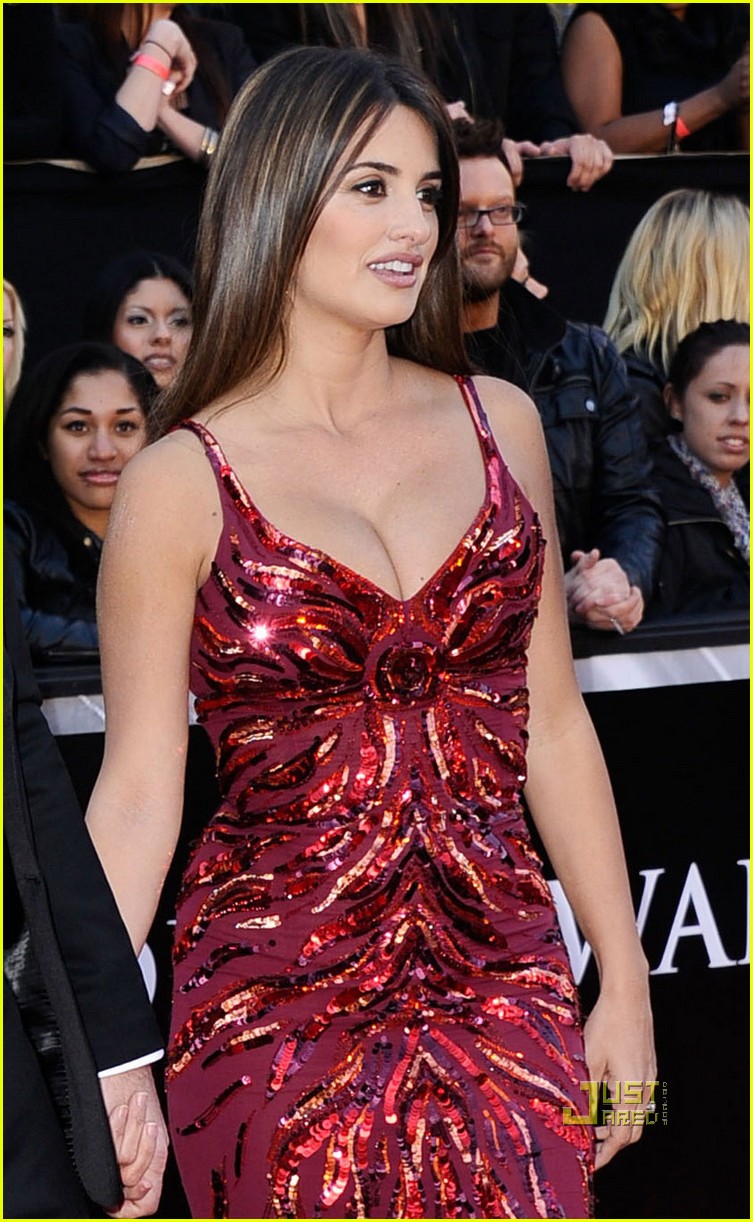 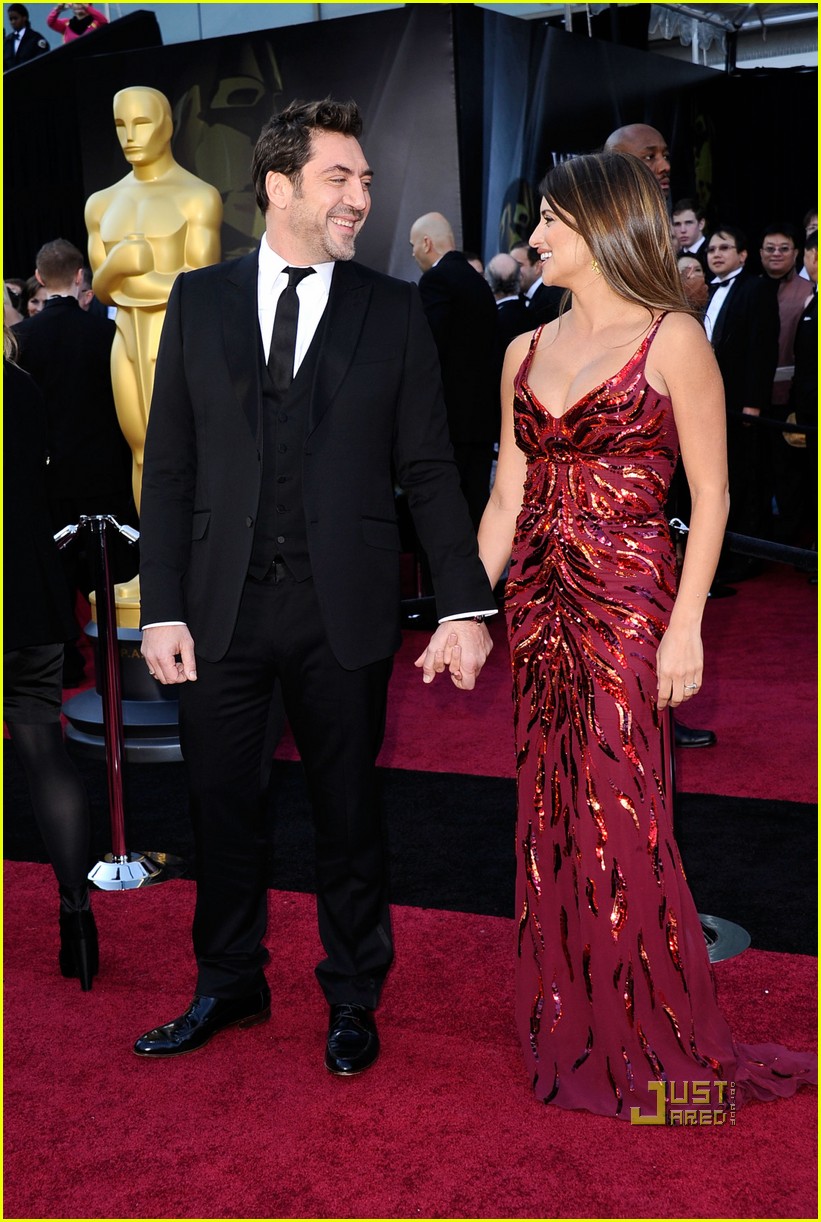 4) Anne Hathaway - Host Hathaway sported several gowns over the course of the evening, but my absolute favorite was this strapless, Atelier Versace gown. Absolutely gorgeous. I wonder if her dresses were all selected by Team Zoe, or if the Oscars had their own stylist. Thoughts?

Though Franco and Hathaway flopped as hosts, I was thrilled to see so many of my favorite take home statues tonight - Christian Bale, Colin Firth, Natalie Portman and of course, the toys of "Toy Story 3."

And with that my friends, another awards season comes to an end. Thank you for reading my recaps and for sharing your thoughts with me!

The credits at the end of the show mentioned Team Zoe as Anne's stylist, so I'm guessing Zoe selected each outfit personally. Each was brilliant, her gold sequined dress was my favorite.

Anne's dresses were all uniquely gorgeous! I agree with your thoughts on them as hosts, James Franco must have been taking bong hits backstage....

and what about the Melissa Leo F bomb?

Jennifer Lawrence - the woman cleans up nice ;) loved her in Winter's Bone and the Calvin Klein red number was stunning! Thanks for the fun recap!!

Great recap! Totally laughed at Cate Blanchett's "that's gross!" over Wolfman! (It *was* gross!) I loved Vanessa H's lilac dress... and Reese Witherspoon's black and white gown. So beautiful. I am soooo glad the Oscars have returned to glamour. So nice to see white tuxes on some of the guys, too. So agree about your comments about the hosts, I even shouted aloud at the television at one point, "Are you really stoned, James?! C'mon!" ;)
PS: What the heck was up with Scarlett Johansen's hair?! Good lord... could someone loan her a comb?

For more quotes from PopBopShopGirl, check this out:

And yes, Team Zoe did all of Anne's outfits. Read: http://popwatch.ew.com/2011/02/28/rachel-zoe-anne-hathaway-oscar-outfits/

Michele - I didn't watch the credits, thanks for the Team Zoe confirmation!

Daisy - Agreed, James Franco was absolutely stoned. Jennifer Lawrence was stunning! I can't wait to see what she does next.

MFB - Your live-blog from last night's festivities is utterly HILARIOUS. Thank you for the link to Anne's fashion info!

END_OF_DOCUMENT_TOKEN_TO_BE_REPLACED

Must Watch: Taking the Stage 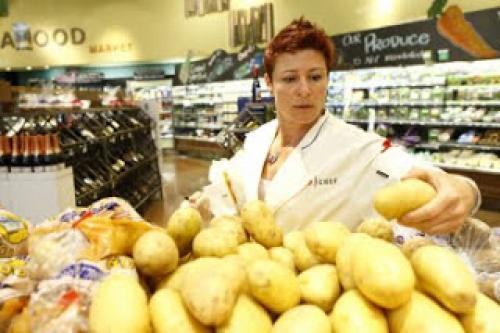 As my loyal readers know, I watch many reality television competitions shows.

Its All Greek To Me