Did you hear that? Its the sound of Whitney's heart sinking.

After episode one I was totally smitten with Whitney's new boy toy, Jay, an Australian musician. He always tells her how beautiful she looks, is very affectionate, and even showed up to a socialite's dinner party that he was DREADING, just to make her happy. I was vicariously floating on Cloud 9.

At the start of tonight's episode Jay had me believing he was the dream man. He found Whitney a gorgeous apt, on the 30th floor in Gramercy, with a killer view. Floor to ceiling windows, and the best part, available immediately. He walks Whitney out onto the balcony, looks out on the city with her, and says "Babe . . ." and I didn't hear what came after that, as I was paralyzed by the sexiness of that word in an Australian accent. Needless to say, he was winning major points.

Until the next scene when Whitney's friend Erin shares that she and her boyfriend of two weeks have just said "I love you". Jay rants and rants about how it is too soon, how can she know, what if its just lust, etc etc. I could see the panic creep into Whitney's mind and the wheels began to turn.

Her fears were later confirmed in the final scene of the night when Jay brings the subject up again! He asks Whitney "do you think that since we have been hanging out for a month, that makes us boyfriend and girlfriend?". This leads to a back and forth in which Jay declares he simply wants to get to know Whitney better, but doesn't want to put a label on it. Whitney hints that if he doesn't want to make her a priority, she will find someone who does. OH SNAP!

Previews for next week show Whitney does accept an invitation from another man, sending Jay into reflection mode, and changing his tune!

Although the focus tonight was on Whitney and Jay, I did enjoy the cameo from Olivia's cousin Nevin. He first describes being given at ticket for spitting on the subway platform, then tells Olivia she is being a great friend to Whitney, who should watch out for the NYC girls because "they are cut throat evillllllll". Does he remind anyone else of Anthony, Charlotte's gay wedding planner from Sex and the City? Yes, are you seeing it?

Also enjoyed the sense of deja vu when Jay called Whitney at the DVF photo shoot, asking her to leave ASAP to come see the apt. Very reminiscent of Jason calling Lauren at the Teen Vogue photo shoot asking when she could leave to come home and begin his birthday celebration. Oh, the good ole days.

END_OF_DOCUMENT_TOKEN_TO_BE_REPLACED 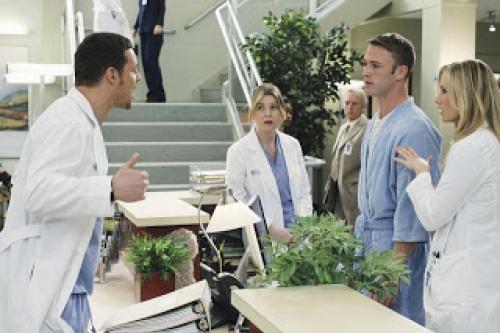 Grey's Anatomy: Once Upon A Time Over Crispy Puffs