I first learned of the Parker Hotel in Palm Springs on Bravo TV. In the summer of 2007 the network aired a show called Welcome to the Parker, centered around the hotel's staff. It was only six episodes, but I was completely enchanted by this luxurious, clandestine hideaway.

In doing research for this post, I discovered you can actually watch Welcome to the Parker on Amazon.

In the weeks leading up to our trip, we reached out to family, friends and co-workers for recommendations of what to see and do in Palm Springs. Every single person (literally) said the Parker. Many friends gushed about celebrities they had spotted there, which was all we really needed to hear to decide we'd be going.

We pulled into the hotel's circular driveway (sidebar, I've always said I'll know I've made it when I live in a house with a round driveway) and were stunned by the beauty of the Parker's signature wall. You may recognize it from artist Gray Malin's prints.

Sheepishly we asked the valet if he wouldn't mind taking a group photo for us. He clearly gets asked to do this all the time, because he took multiple shots, from multiple angles, all with a giant smile on his face.

We walked into the lobby and I gasped when I saw these lip prints leading up to the second floor. So glam!

A few steps further in, there's a cute seating area. I remember this "Drugs" sign from the TV show.

We walked straight outside, hoping to sit by the pool for cocktails. One of the security women told us, "The pool is for hotel guests only." I was crushed. I had been picturing myself, perched on a stool, legs crossed, sipping from a cocktail, pretending like I wasn't quietly freaking out that we may catch a glimpse of a celeb.

She said we were welcome to imbibe at any of the hotel's bars or restaurants, just not the pool. Harumph.

Our first attempt was the bar Counter Reformation, which has a religious theme.

Check out this Jesus corkscrew painted next to the front door.

Counter Reformation was on the garden level, with no windows and felt very cavernous. The vibe was just all wrong, especially in contrast to my original poolside dream.

As we walked back down the path, we passed Norma's, which many friends told us was an excellent place for brunch.

The citrus color palette of the decor felt very tropical.

We wound up back inside in the lobby bar. This area of the hotel has some very fun and funky seating.

These swings reminded me of the swings in the front window of By Chloe in Boston.

We had a fantastic waitress named Sam, who guided us toward the most popular drinks. Fair warning: the cocktails at the Parker are $19 dollars each, so come ready to spend (you'll want more than one).

We were all attracted to the same two drinks, though I neglected to photograph or note their names and descriptions (sorry!!).

I can tell you that my drink was some combination of vodka, hibiscus tea and elderflower and it was strong. I was feeling it before I was even half way through the first drink.

While we sipped, we also enjoyed a cheese plate (which we made disappear rather quickly).

The birthday girl we were toasting to is gluten-free and Sam was able to bring gluten-free bread and veggies so that she could enjoy the cheese plate (and the mezze platter we ordered later) to the fullest.

Much to my chagrin, we did not see a single celebrity. Of course, now that we're back in Boston, writer and fashion mogul Nicolette Mason is staying at the Parker.

In the days after our happy hour, I went into deep research mode to figure out how much it would cost to stay there (I must get to that pool!). The hotel website advertises rooms starting at $325 per night, but a quick Google search yielded deals as low as $199 through third party sites like Hotels.com and Expedia.

If you're headed to Palm Springs, a stop at the Parker for a drink or a meal is an absolute must. The setting is beautiful and unique, and the people watching is spectacular.

I mean, it's been two weeks and I'm ready to get back on a plane.

Meet you at the airport? 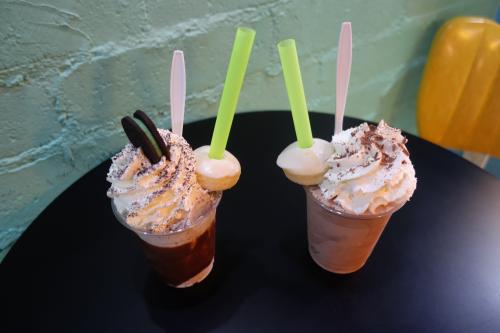 The most decadent frozen treats in Palm Springs are at Great Shakes. Where else can you get a milkshake garnished with a donut?

The best brunch in Palm Springs, CA is at Cheeky's. A beautiful outdoor patio, delicious food, speedy service and a star dish - the sticky taters! 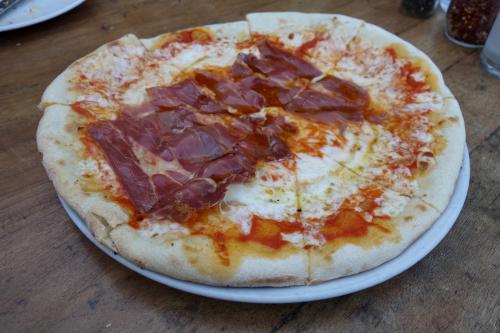 My favorite meal in Palm Springs was at Birba. Enjoy the beautiful outdoor patio while noshing on burrata cheese, pizza and pasta. Be sure to save room for their fantastic desserts.