Dining Out: Bardot Brasserie at Aria

I have just returned from a long weekend in Sin City. Las Vegas is one of my favorite vacation destinations. In general, I love that absolutely everything there is so over the top. More specifically, I keep going back because it is sunny 365 days of the year, every hotel has a beautiful pool, the best chefs in the world seek out these hotels for their restaurants and whatever your interest is, there is an entertainment option for you (concert, comedy performance, Cirque du Soleil show). And did I mention the luxury shopping malls?

On this trip, my friend and I stayed at Aria. I had walked by the hotel before (it was actually under construction during my very first Vegas trip in 2009), but I had never been in. The Aria lobby is stunning and gets tons of natural light (a rarity in Vegas). It is bursting with color and fragrance from the most incredible flower arrangements. It also has several head-turning sculptures.

Because Aria is not home to a concert or show venue, the only people coming and going are hotel guests. It really helps to cut down on the riffraff! They do have a casino, but it's very small, which also means less non-guests and more importantly, less smoking!

We decided to splurge and book a room with two queen beds. Little did we know that room would also have two closets, two sinks (!!), a rain shower and a jacuzzi tub. Our beds were so comfortable and each one was topped with seven pillows (lucky number seven, I presume). The room was super spacious and always spotless.

In addition to the great room, we also enjoyed two full days at the Aria pool. Though it is much smaller than other hotel pools like The Mirage or Caesar's, it has a tranquil, spa-like vibe.

I could go on and on about the reasons to stay at Aria, but the one I want to be sure to mention is the restaurant selection. I was truly impressed by all of the food choices at the hotel, both fine dining and casual.

On our first night in town we landed at 8:00pm and headed straight to the hotel to check in. We had made a 9:00pm dinner reservation at Bardot Brasserie, the hotel's French restaurant.

Bardot is the brain child of celebrity chef Michael Mina. Bostonians, you may recognize his name as the chef behind newly opened Pabu in Downtown Crossing. Bardot's menu is described as "French cuisine with a twist." Last year the restaurant was a James Beard finalist for Best New Restaurant and received an Award of Excellence from Wine Spectator Magazine.

As we approached Bardot from the guest elevators, we both gasped. The exterior looks exactly like a sidewalk cafe in Paris.

We stood on the Bardot branded tile as we waited to be led into the restaurant.

The bar area has that same Parisian cafe vibe.

Look at those blush colored roses! They are real. I touched them.

The bar itself is a gilded masterpiece. Look at all that gold!

The hostess wound us through the bar and over to our table. The dining room is just as spectacular as the bar area.

I loved the light fixture. It looks like Glenda the Good Witch bubbles will come floating down from the ceiling.

Behind us was the partition that separates the dining room from the kitchen. The text on the glass added to the authentic French feel.

We were greeted by a jovial waiter who warned us, "You got the sarcastic server tonight." Oh boy. He handed each of us a menu and we couldn't wait to dive in.

Our first order of business was to order drinks so we could toast to our arrival in Vegas. When we discovered a section of the drink menu called "The Champagne Cart" I knew right away we had to do that. In fact, it reminded me of the Rosé cart at Summer House Santa Monica in Chicago, which I enjoyed with this very friend!

We opted for two glasses of sparkling rosé. This variety was described as "racy and bone dry with bing cherry, strawberry, citrus with a limestone finish." Racy!

While we were looking over the food menu, our waiter delivered each of us our own personal French baguette. Not one per table, one per person. It came with the most decadent salted butter.

Many people skip bread at restaurants to conserve calories for other items, but do not do that here. The bread has a fantastic, crunchy crust and a soft, doughy inside. The taste of the crystals from the salted butter is heavenly.

Our game plan was to order several small to medium size dishes and share. Do you think we went a little overboard?

My dinner date was excited to try to the Prince Edward Island mussels which were swimming in garlic butter, dolin vermouth and seasoned with tarragon. The dish came topped with a warm baguette for ripping and dunking.

My friend is a huge seafood fan, so I was anxious to hear her thoughts on the dish. She said, "Sometimes mussels can be small and it feels a bit like you aren't eating much of anything. These mussels were fresh, tender and meaty. The broth was super flavorful, but didn't leave me feeling too heavy or full. If you eat the entire baguette, this dish is definitely enough for a meal."

I started with the endive, walnut and blue cheese salad. The dish was topped with watercress, apples, toasted walnuts and a honey banyuls gastrique.

This salad was enormous! There was a mountain of endive that I am not sure even two or three people could finish. For me, I wish the ratio of endive to the other goodies had been a bit more even.

In addition to the mussels (for her) and the endive salad (for me), we also shared three side dishes. The first to arrive was Bardot's take on macaroni and cheese. This dish has the same coloring as the classic Kraft macaroni and cheese with one million times the sophistication.

This is basically a macaroni and cheese loaf. It's about the size of a slice of pound cake. The way it is prepared gives the top and bottom the same crispiness as the rice on the bottom of a paella pan. I gobbled this up like Ms. Pac-man.

We also nibbled on the blistered green beans. I love green beans and these were coated in lemon-butter and served with an almond crunch on top, almost like a granola cluster. It was impossible to get the beans and the almonds on the fork at the same time and believe me I tried! I had to resort to plucking the almond clusters with my fingers. #sorrynotsorry

Our final dish was the black truffle French fries. I regret to inform you that I did not actually taste truffle at all, but I did appreciate that they were expertly crisped and seasoned heavily with black pepper. This was a very generous portion. It felt a bit like the Mary Poppins bag. Every time I reached in, I was surprised to find more.

The aioli that came on the side for dipping was addicting. I couldn't get enough.

When our dinner plates were cleared, our waiter brought over the check, assuming we didn't want dessert. When he saw the look of horror on our faces, he raced over with the menus and also brought a gift from the bar - two glasses of yellow chartreuse.

Neither of us had heard of yellow chartreuse, so we got a bit of a history lesson. It is aged in French Oak (always a good idea) and gets its color from spices like saffron. For me, it had a vinegary taste.

For dessert we selected a dish called the frozen Paris brest. It was hazelnut ice cream, chocolate crémeux and salted caramel sauce. I am not sure what I was expecting, but the presentation shocked me. It looked a bit like a Christmas wreath of profiteroles.

The hazelnut flavor of the ice cream was extremely subtle. With each bite you tasted the crunch of the pastry and the salty sweetness of the caramel.

At this point, we were ready to be rolled back to the elevators!

Our meal at Bardot was exceptional. The setting was gorgeous and the food was elegant. I'd like to think Bardot is the type of place F. Scott and Zelda Fitzgerald would have come to get in some trouble.

What a decadent and delicious-looking meal!!!

We definitely kicked off the trip in style! 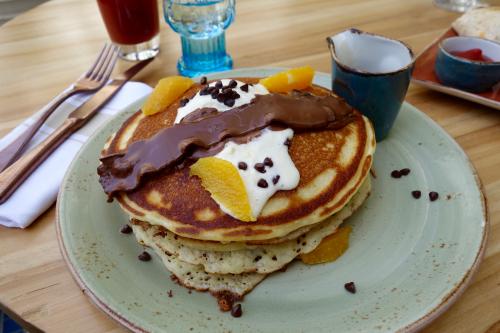 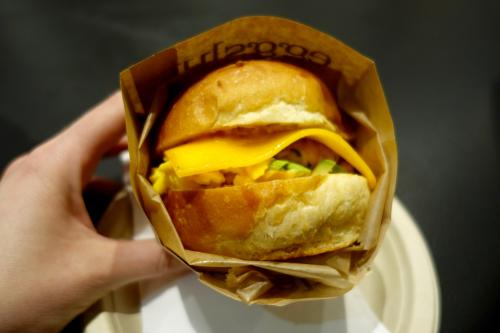 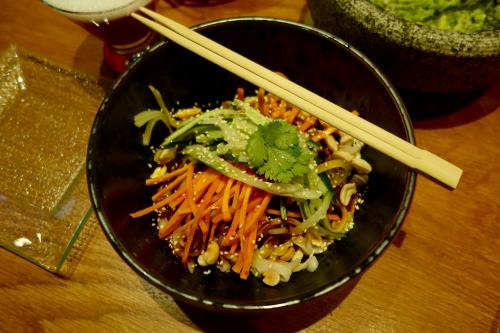