In January I shared with you my 15 new year's resolutions for 2015 and last month I updated you on my progress toward each goal. Well, this week I achieved one of the biggest goals on the list . . . I adopted a dog! 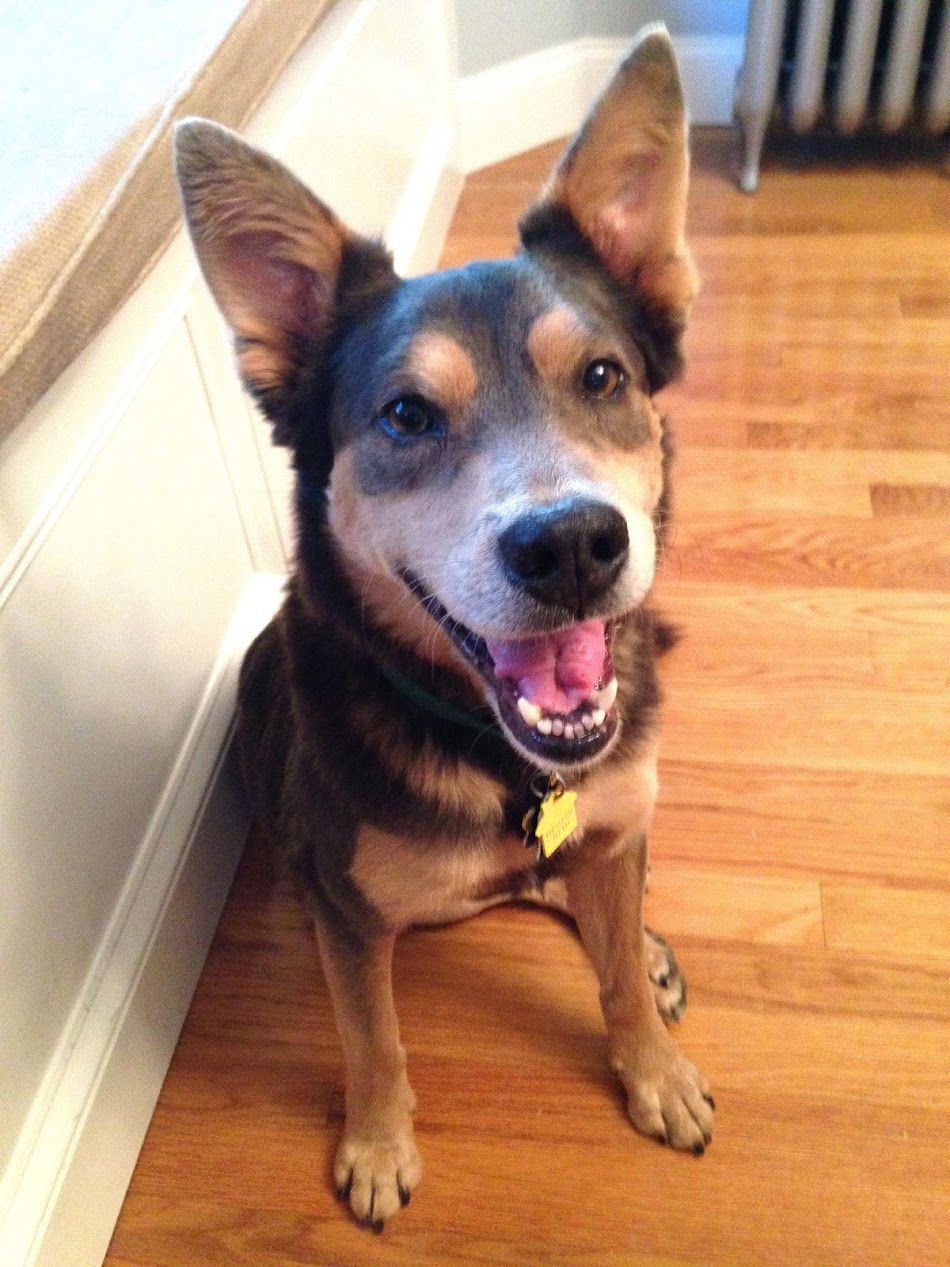 I have wanted a dog since the third grade. I even sat my parents down at our kitchen table and little third grade Molly gave them a presentation on why we should get one and everything I would do to take care of it. No dice.

There's a very famous story from my college graduation party in which my mother admitted why we never had a dog. I won't embarrass her here by sharing those details, but needless to say, I could have had one all along!

As an adult, I first became committed to adopting a dog after dog sitting for my roommate's parents' dog, Simba. He was a purebred Sheltie and a total sweetheart. When I would walk him around Inman Square I'm not sure who had more pep in their step, me or him.

Last year, around Thanksgiving, I resolved that 2015 would be the year I finally adopted my own dog. I started following a bunch of local shelters and rescues on Facebook so I could see photos of the new pups as they were arriving. My newsfeed quickly went from 90% wedding and baby updates to 50% dog photos (and 50% weddings and babies).

The magic moment happened last Thursday. I was at work and talking about my dog search with a few coworkers when someone suggested that we check the site for Northeast Animal Shelter. Though I was already following them religiously on Facebook, I hadn't checked yet that day.

The page loaded and there he was, Scout. There were two photos of him and he was smiling wide as could be in both pics. His description read:

"Hi, my name is Scout and I am a wonderful laid back boy. I was having trouble finding a home in Texas, so I hopped aboard a plane and came here. I listen well, am housebroken and I enjoy resting in my kennel. I really am a friendly fellow and I know that I am going to have much better luck finding a home and family to love now that I am here."

My coworker squealed, "You have to get him! Let's call right now." Before I knew it, we were dialing Northeast Animal Shelter to see if Scout was still available.

The adoption counselor who answered the phone said Scout was indeed still there. And then the strangest thing happened, I started to feel really anxious that someone else would take him home before I could.

That night I had dinner with one of my best friends and her boyfriend and I talked it all out. How could I adjust my weekend plans to make sure I could give him my undivided attention? Was there anything else I should dog-proof in the house? What should I put on my PETCO shopping list? I hadn't even met him yet, but it was already feeling like it was a certainty.

Thursday night I could barely sleep. I was too excited and anxious. On Friday, I spent the entire work day fidgeting. I called the shelter twice to ensure Scout was still there.

When the clock struck three, my coworker and I (the same one who called about him the day before) hopped in the car and headed north to Salem.

We arrived and I went straight into the dog rooms looking for Scout. You may remember I had visited Northeast Animal Shelter once before, so I already knew the drill. We found his cage, I took his card and ran back to the front desk to fill out the application.

Within minutes we were meeting with the adoption counselor, Sharon. She was so kind and walked us through Scout's whole history. He was found as a stray in Texas when he was about one year old. He was taken in by a woman who kept him for two years. Apparently her living situation changed and she wasn't able to keep him. He was in a shelter in Texas, then got sent up to Massachusetts to try and find a home.

After hearing his story, we were brought into a play room to get some time with him. He came right up to me and put his head in my lap. He loved being pet and scratched and before I knew it, he was laying at my feet asking for belly rubs. Be still my heart.

Next we played with him outside, practicing walking him on his leash and seeing what kind of toys he liked. Then we had another play session indoors. I asked Sharon if we could have a few minutes alone to talk things over. My coworker and I chatted through all my excitement (and concerns) and decided all signs were pointing to Scout as my pup.

We motioned to Sharon that we were ready to make a decision. She asked, "So, what do you think?" and I replied, "I have to him." A knowing grin spread across her face and she said, "I knew you would say that! I already started the paperwork."

It took just a few forms to make things official. Scout was lying very calmly at my feet the whole time. 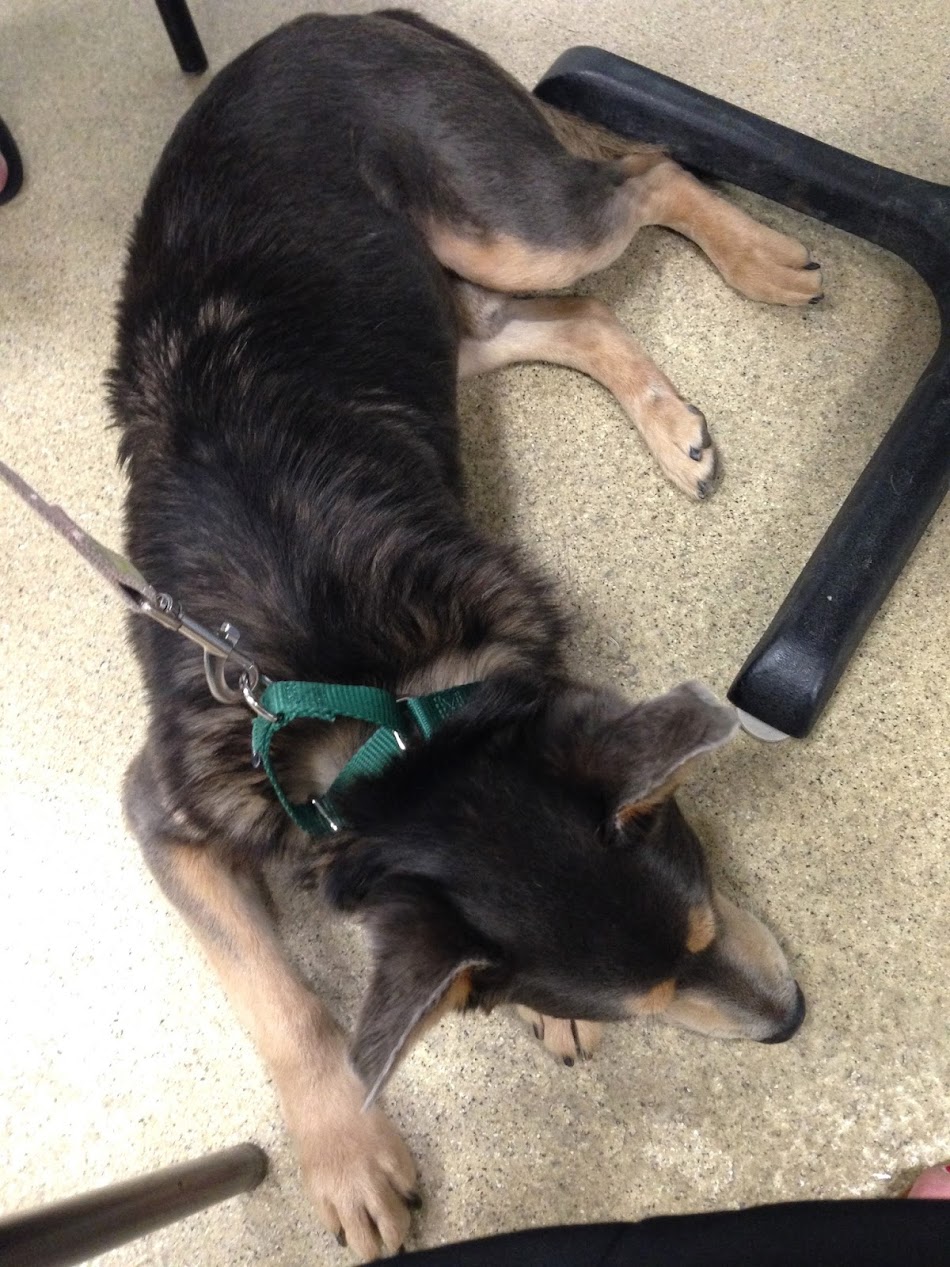 Once we were ready to go home, there was just one final order of business. At Northeast Animal Shelter they clear their white board every morning, add the day's date and as the day goes on, they write the names of all the animals who have been adopted. Sharon walked over to the white board to add Scout's name to the list. You will notice, he is the only pup who got a smiley face next to his name! 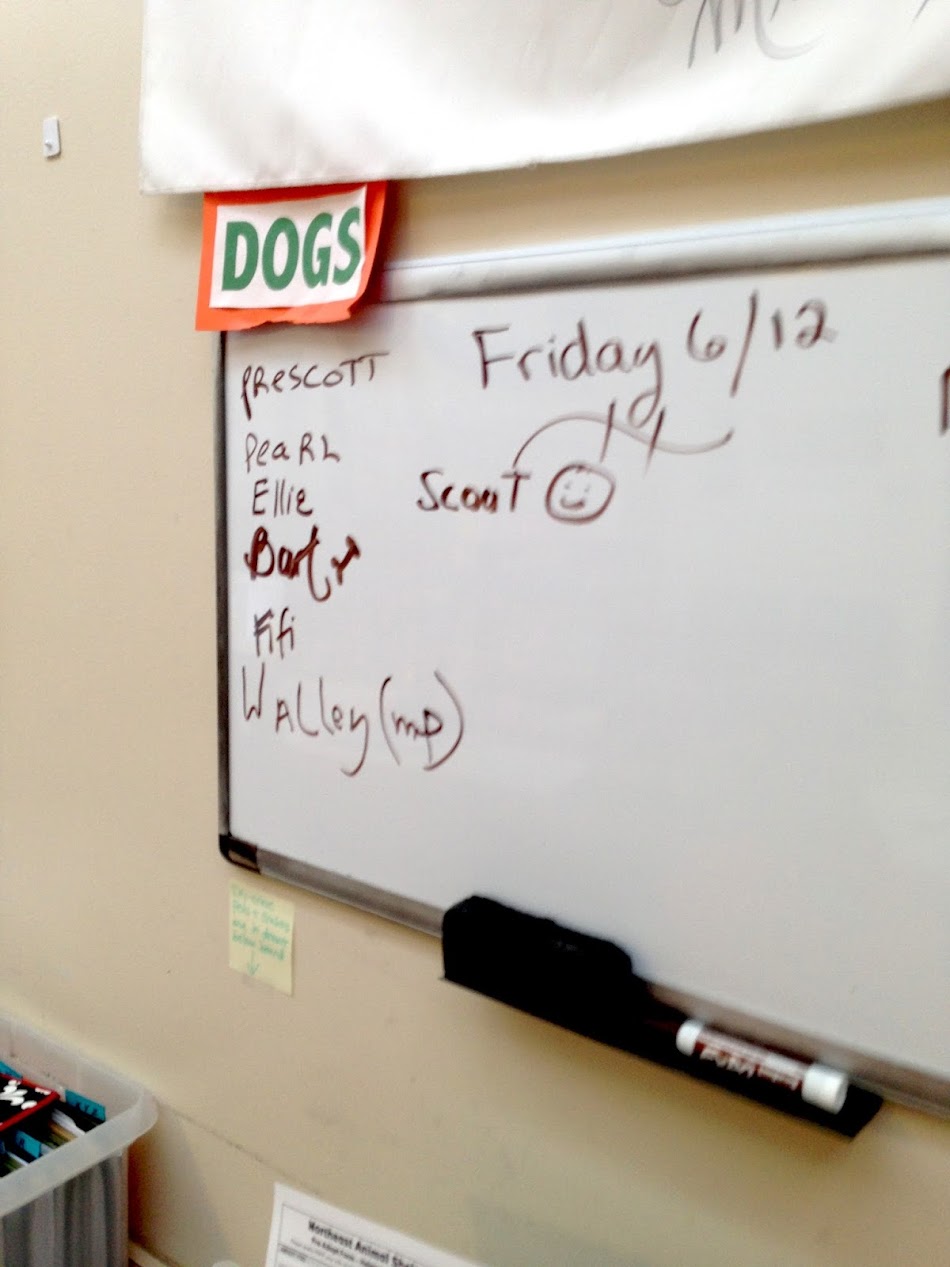 Scout was very beloved by the shelter staff. Each and every adoption counselor came out to say goodbye to him.

And just like that, we were in the car headed to Watertown! 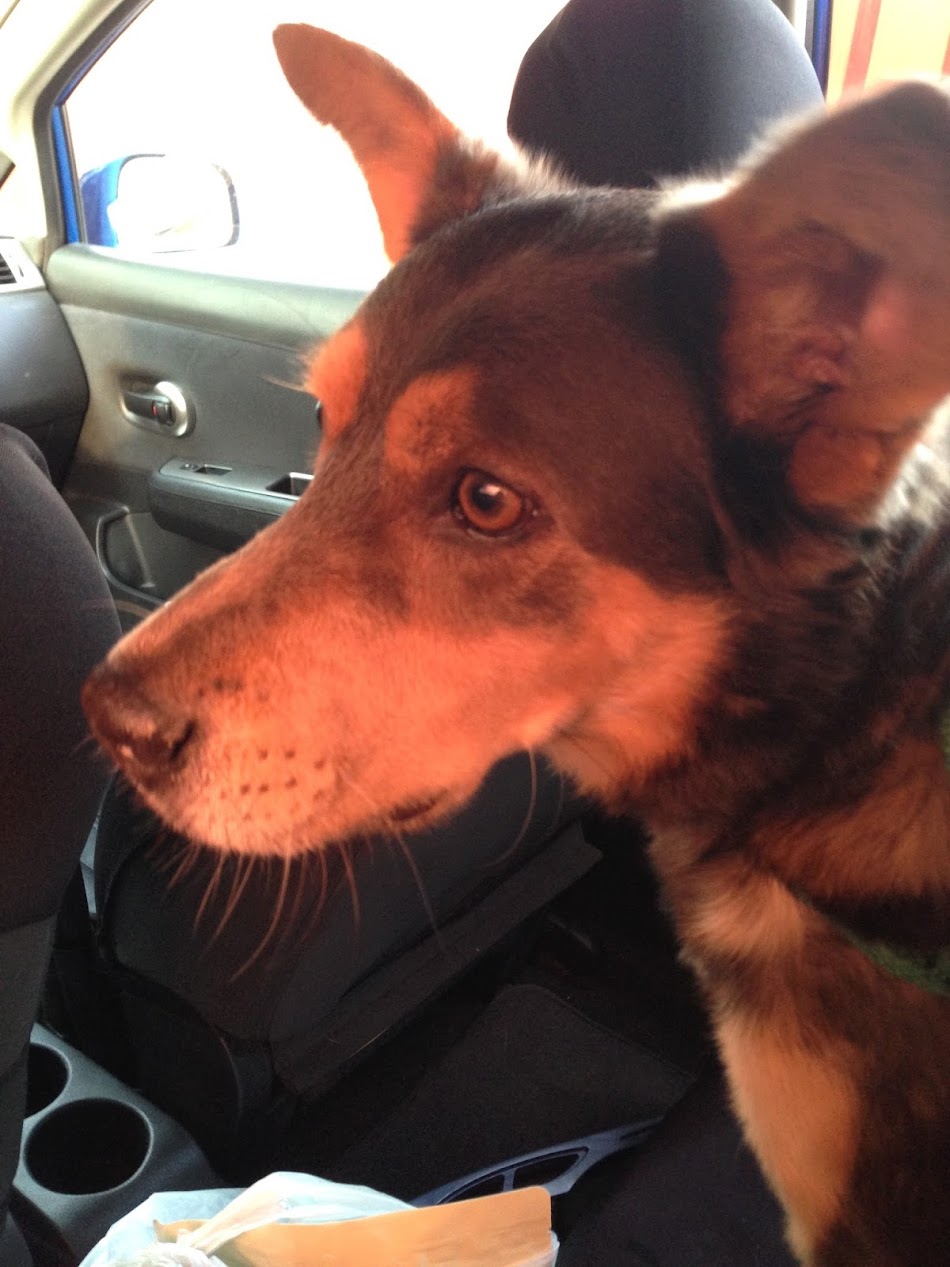 From the shelter, we drove to PETCO. My coworker was amazing in helping me to find all the right things and ensuring we went home with all the essentials on that first night. We got a dog bed, food and water bowls, treats, poop bags and had a custom tag made for his collar.

When I opened the front door to my house, Scout scampered in and immediately began sniffing everything. Thankfully I had already bought two dog toys (you may remember I bought these before I ever had a dog) and right away he gravitated towards the pink unicorn. I've had him for eight days now and the unicorn is still his favorite! 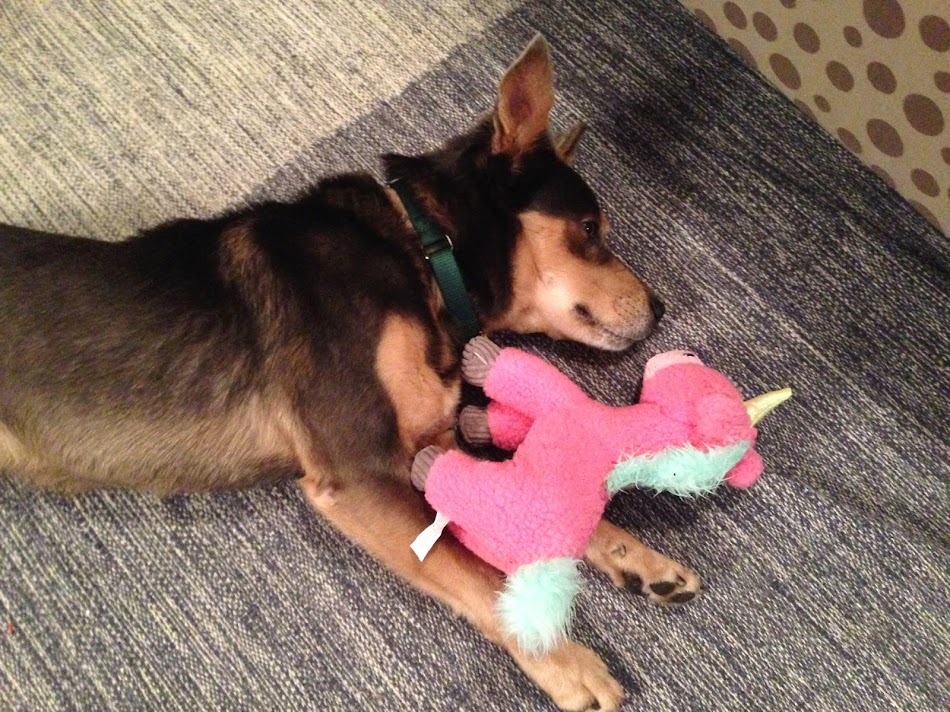 That first night he was very into his dog bed (phew!). I took this photo of him which would up being the photo I used to introduce him on Facebook and Instagram (photo selection was critical). 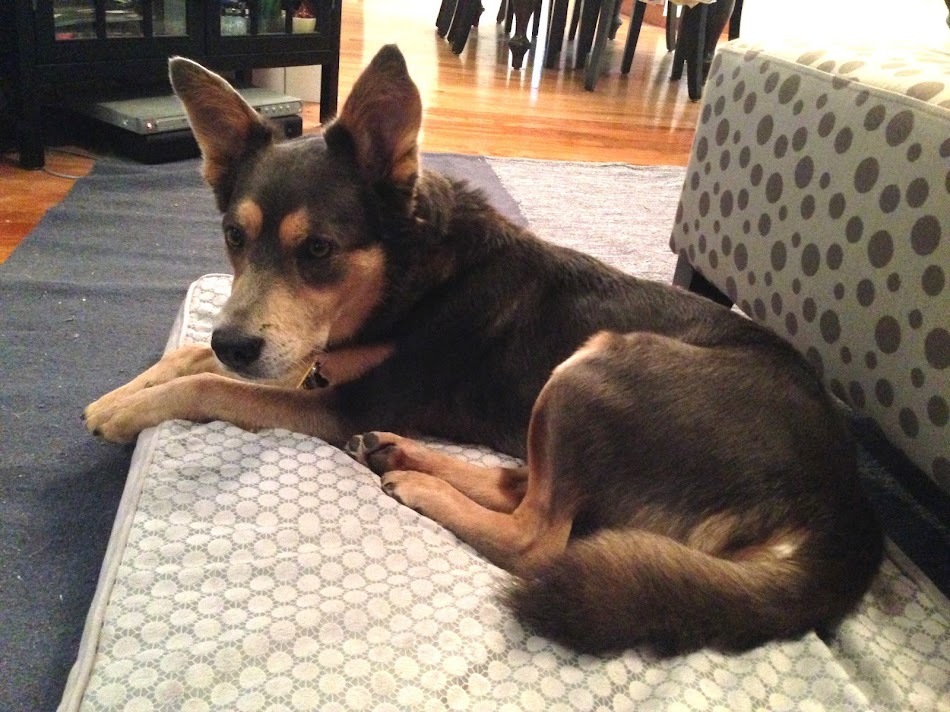 Shortly after snapping that pic, Scout was fast asleep. He looked so adorable that I thought my heart might burst. 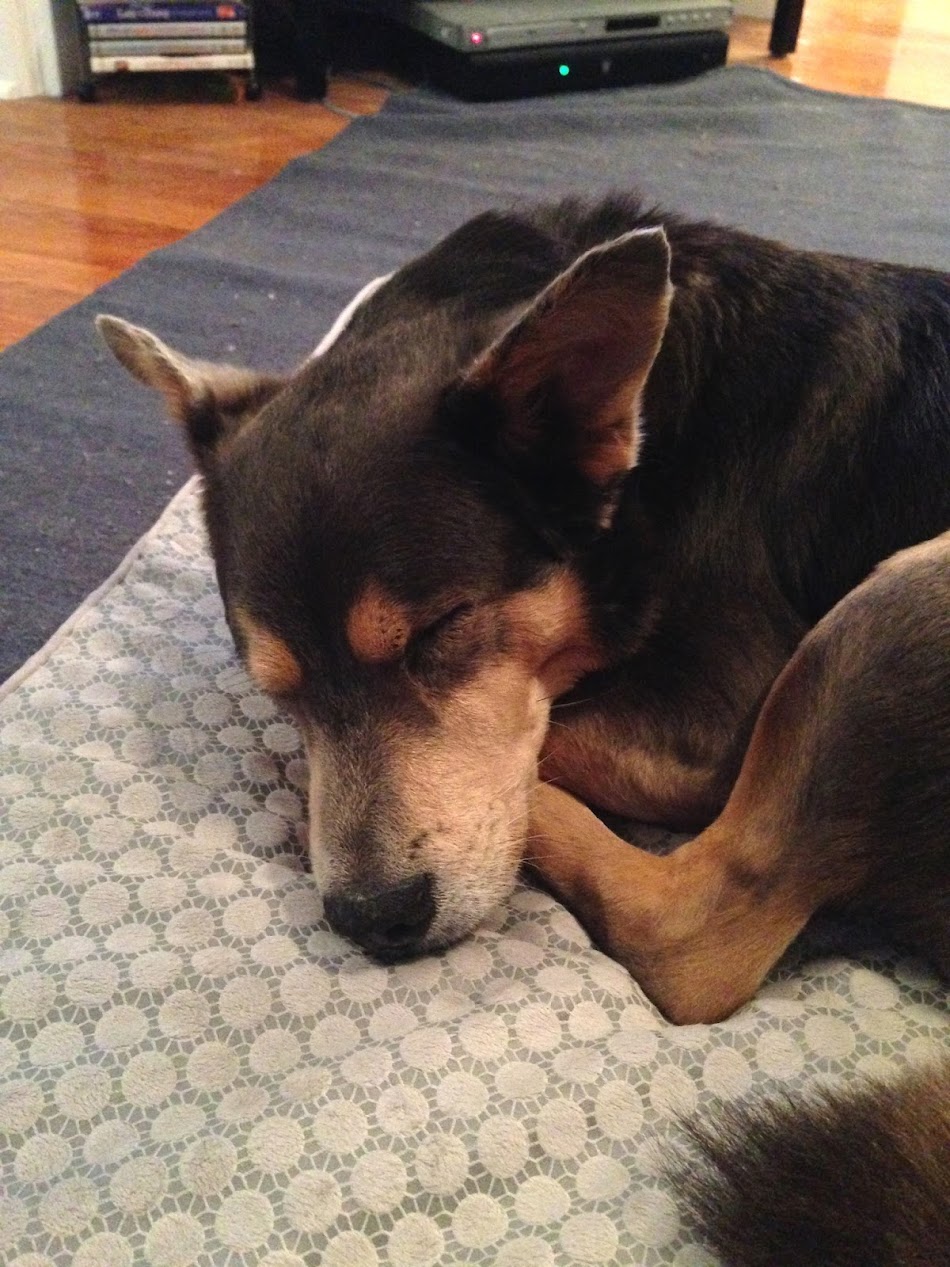 That first night was a tough one. I was so nervous that if I fell asleep I wouldn't hear him if he needed something or he'd get scared or get into something he shouldn't. I stayed awake all night watching his every move.

The next morning, after our walk and his breakfast, Scout gave me a big smile - the first one since he got home. It felt amazingly reassuring. 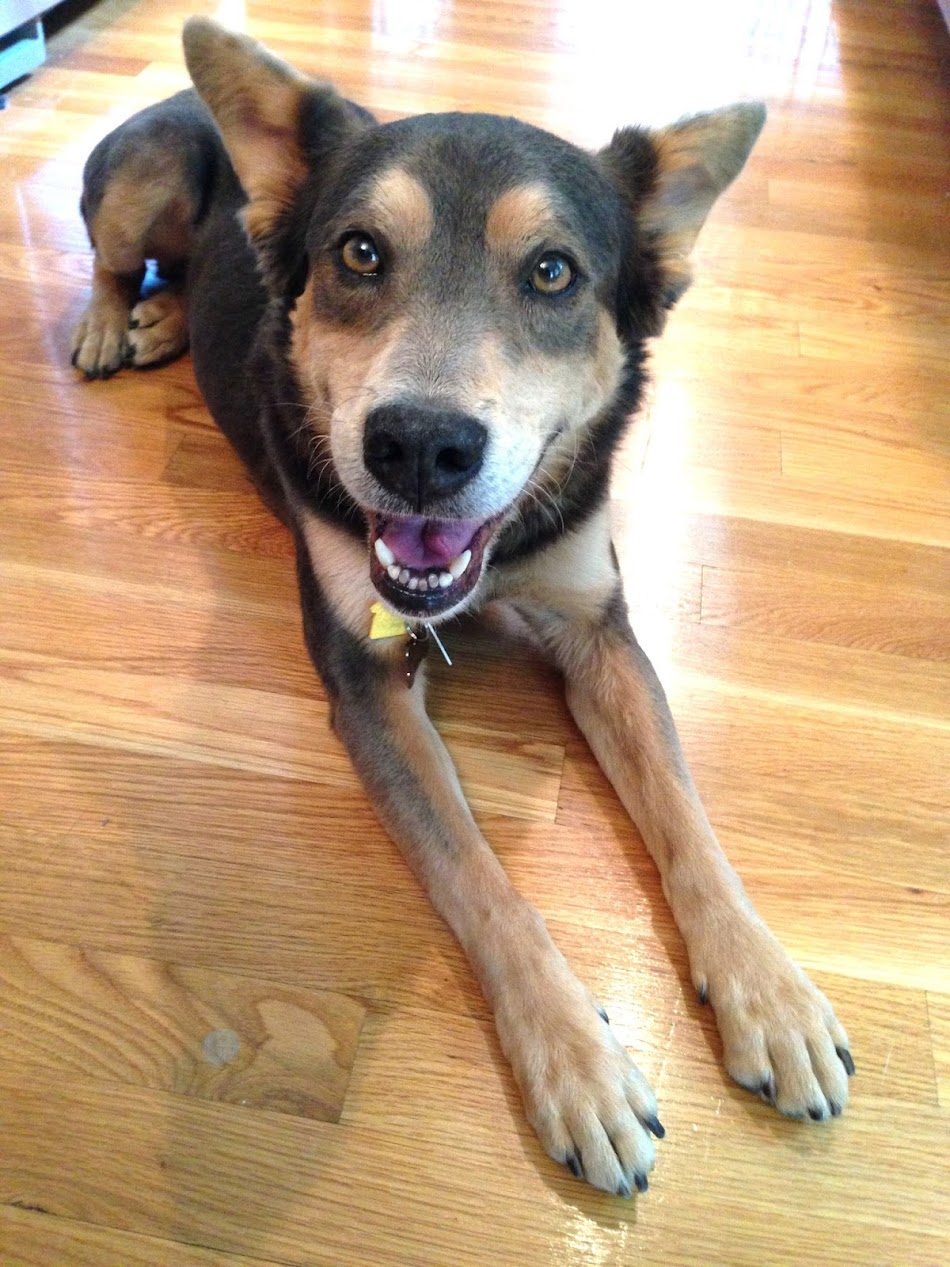 That same morning, Scout was visited by one of my best friends, who came bearing a gift bag full of surprises - toys, treats, a brush, poop bags and carpet cleaner. Ha. Scout is so in love with all the toys. He does the most hysterical thing, which is he plays and plays and then spontaneously decides to lay down and snooze with his toy. 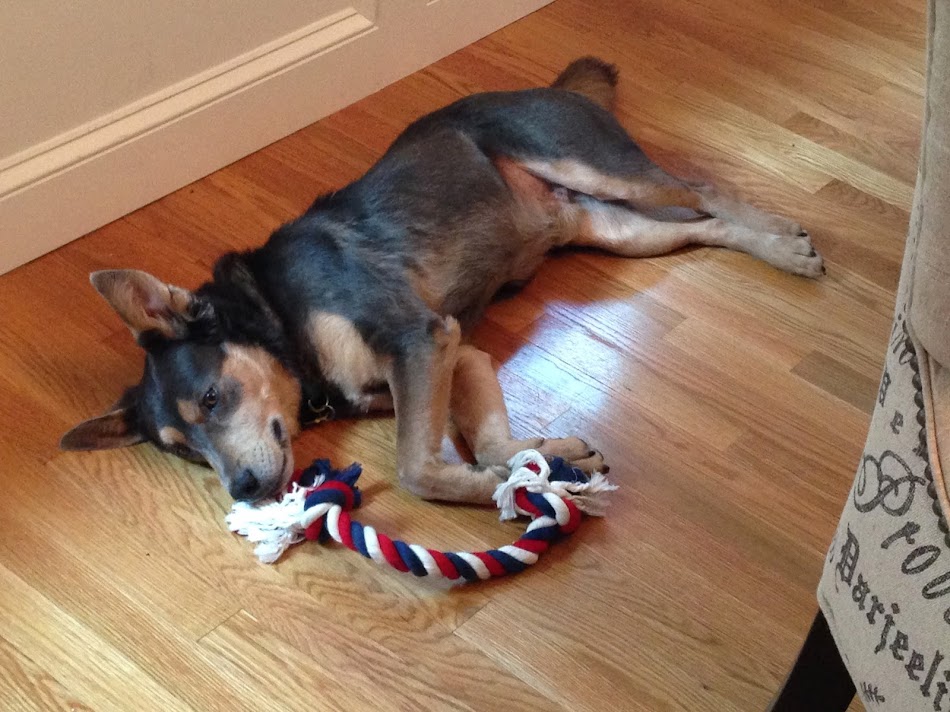 Scout is an expert sleeper. He has a few favorite spots - on the cool (as in temperature) tile in the entry way, on the living room carpet by the fireplace and under the dining room chairs. 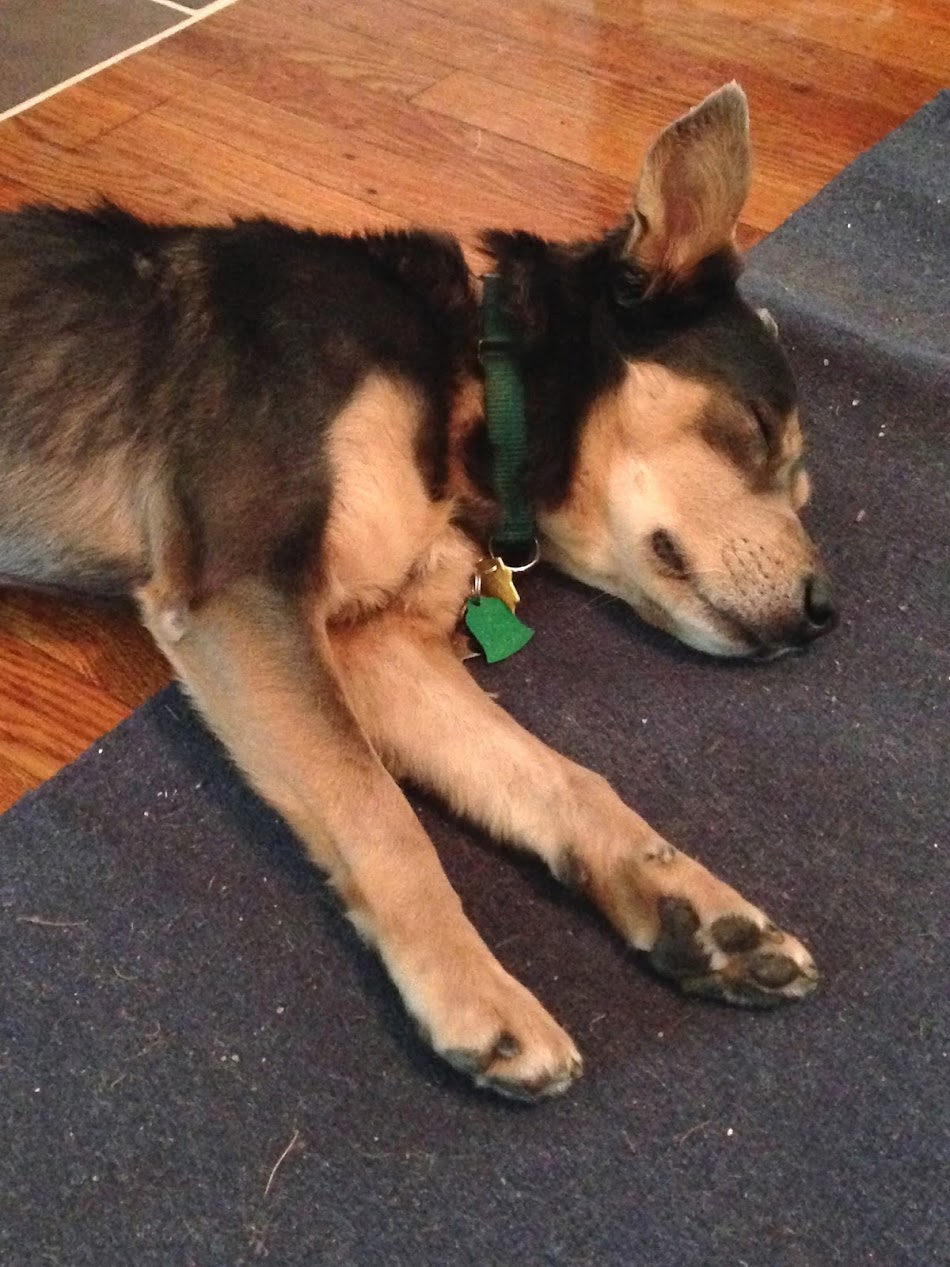 His very most favorite spot is on the couch, against my chenille pillow. I bought this pillow for my dorm room freshman year of college and I love it so much that I've kept it for 14 years. Scout and I clearly share the same taste in coziness! 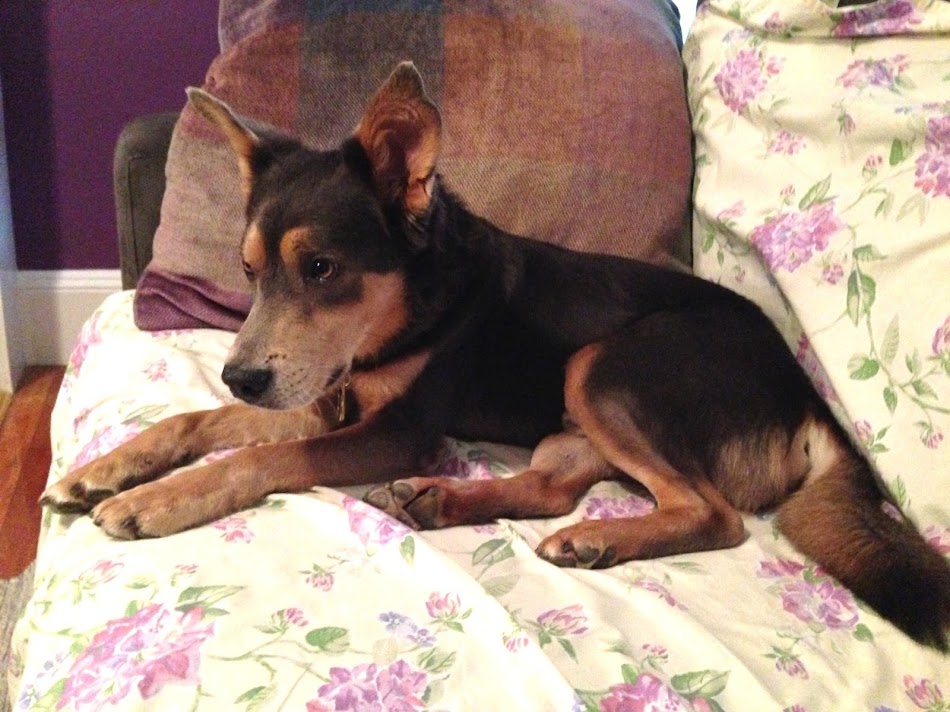 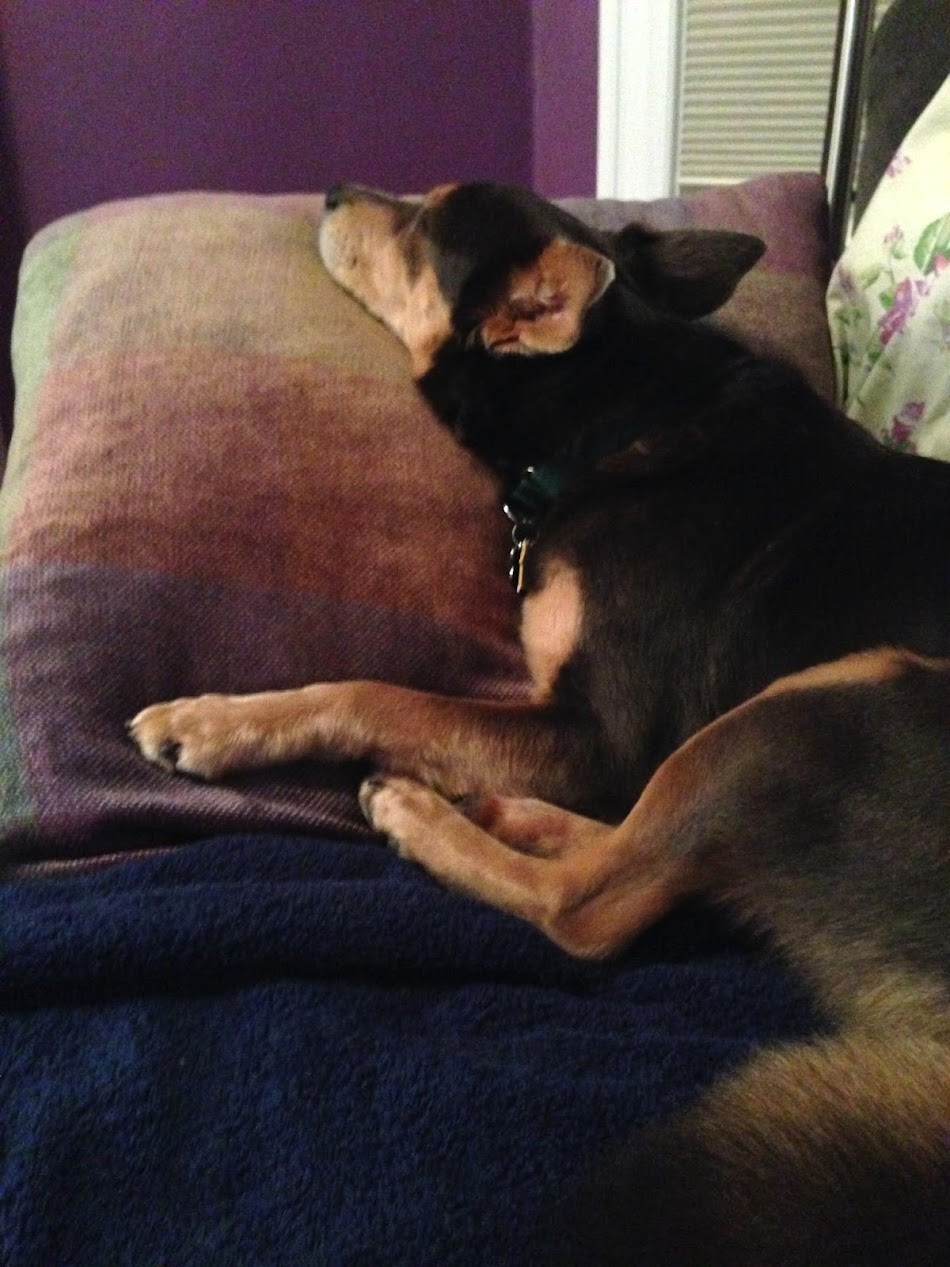 While sleeping is definitely his jam, he also loves walking around our neighborhood. Together, we are walking about five miles a day, which I have to say, feels great. 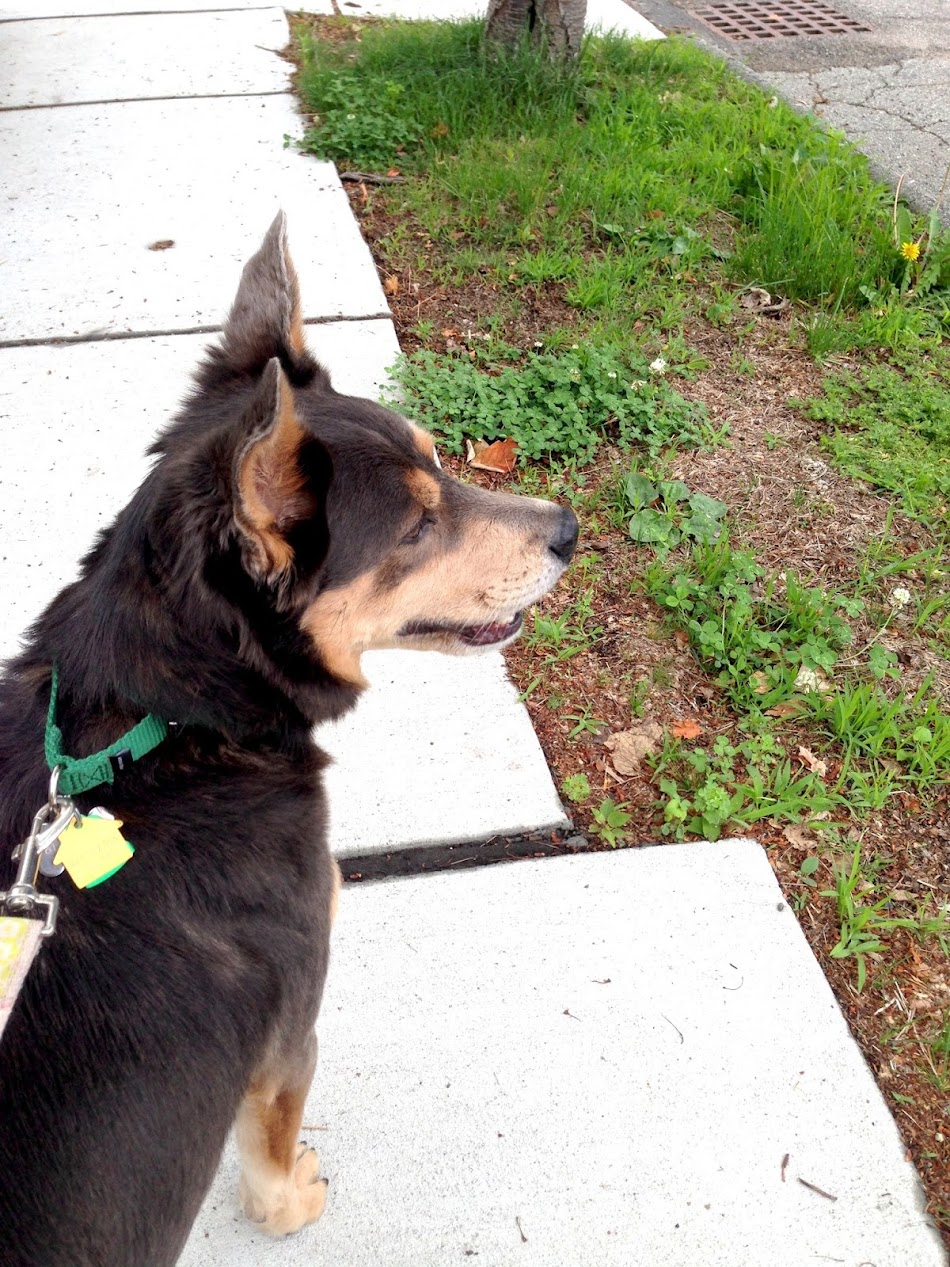 Before Scout, I never really explored my neighborhood. I would just come home to sleep. When I drive around town, I go to the same three places - Sofra, the grocery store and CVS. I always drive the same route and try to get from point A to point B as quickly as possible. Scout has caused me to really stop and smell the roses. I know that sounds cliche, but it's true.

I never really knew my neighborhood was so pretty! There are so many beautiful houses with gorgeous landscaping, backyard patios and grill set ups. Here are a few photos I've snapped on walks: 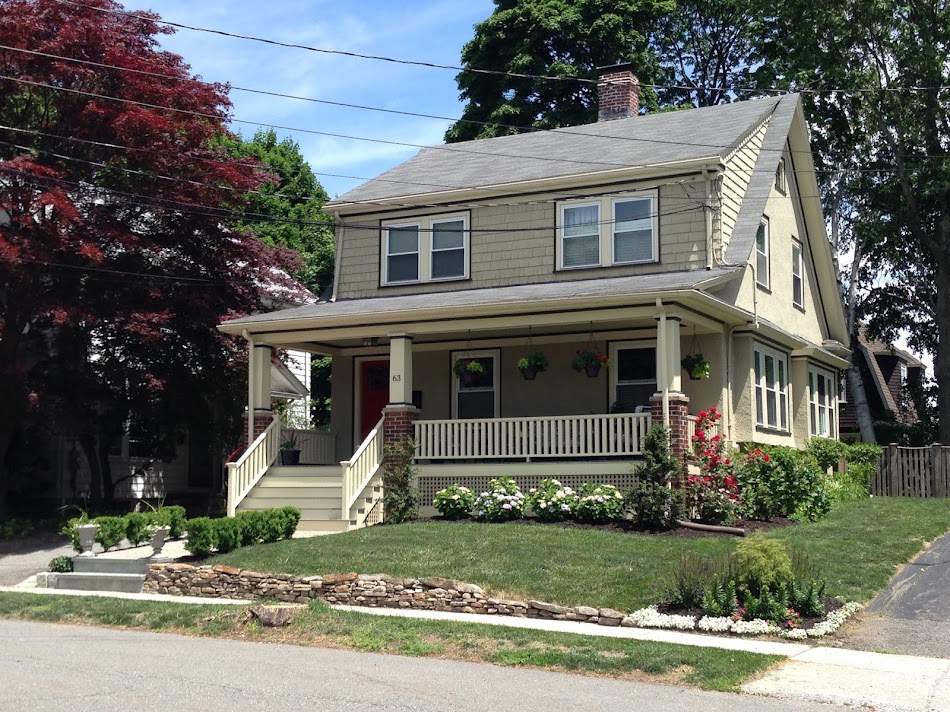 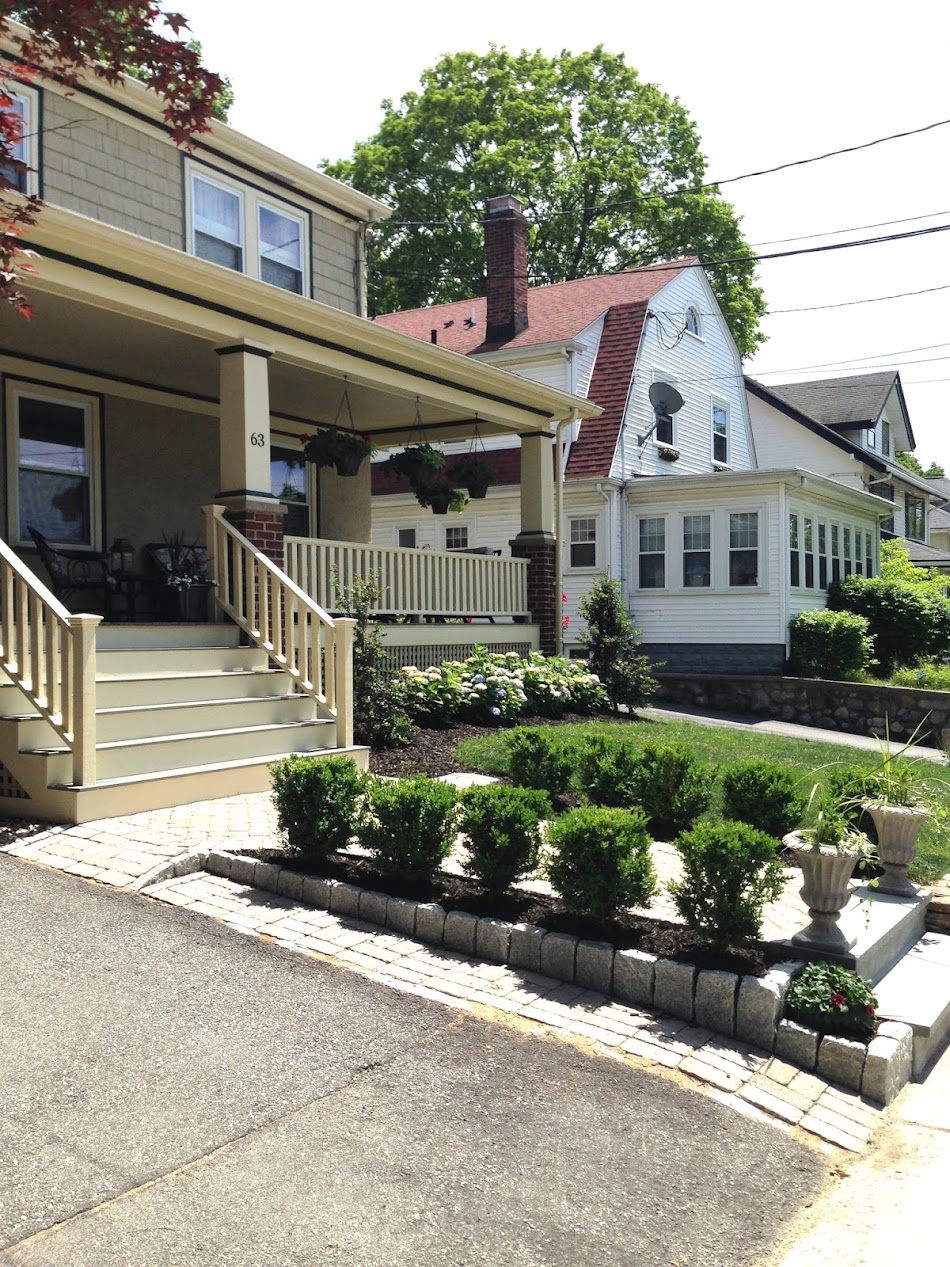 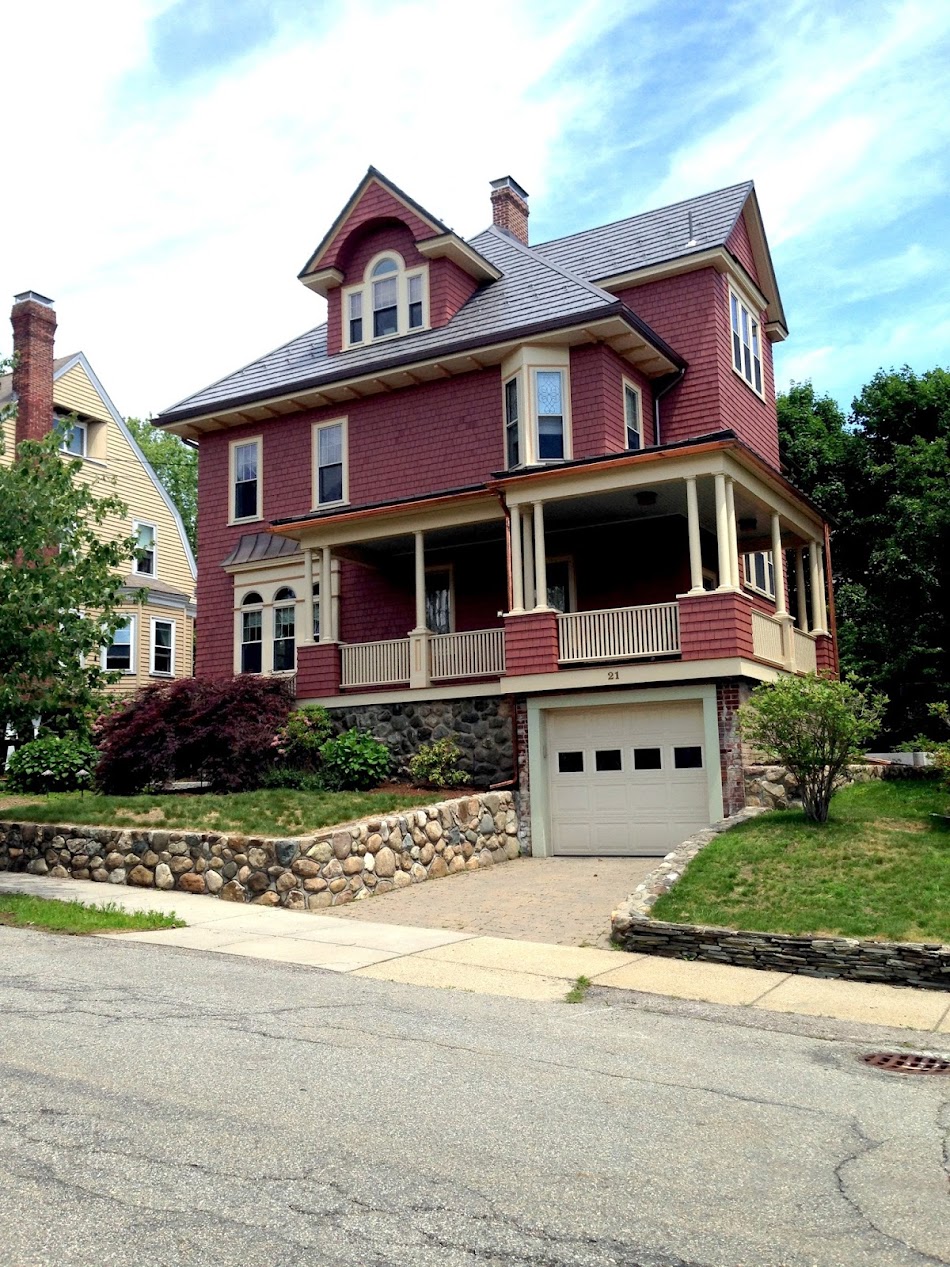 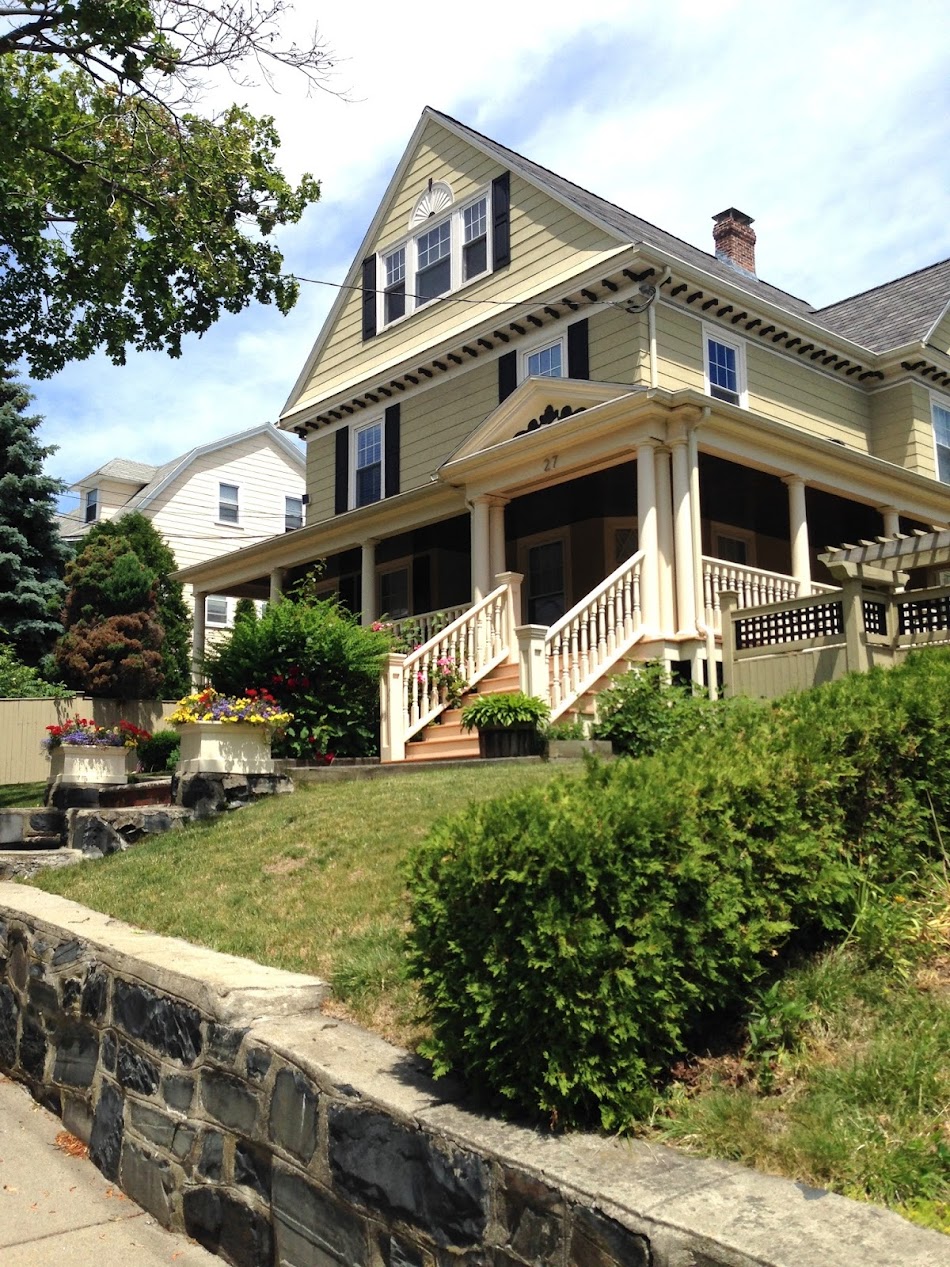 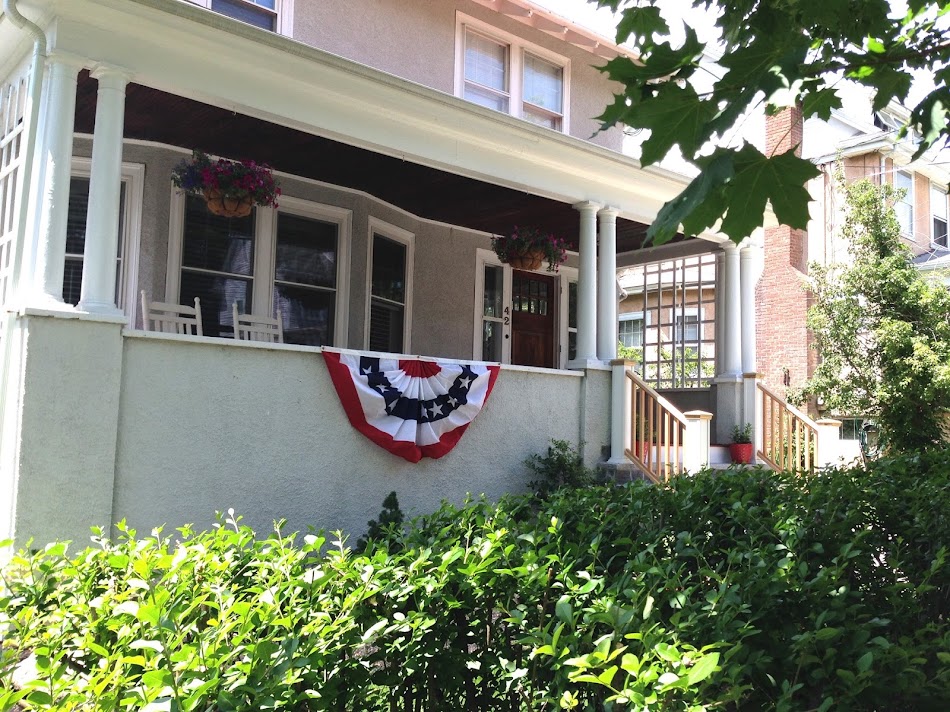 In addition to the gorgeous homes, every day (and night) we also walk by one freaky house which has a huge tiger stuffed animal in the second floor window. It scares me every single time! 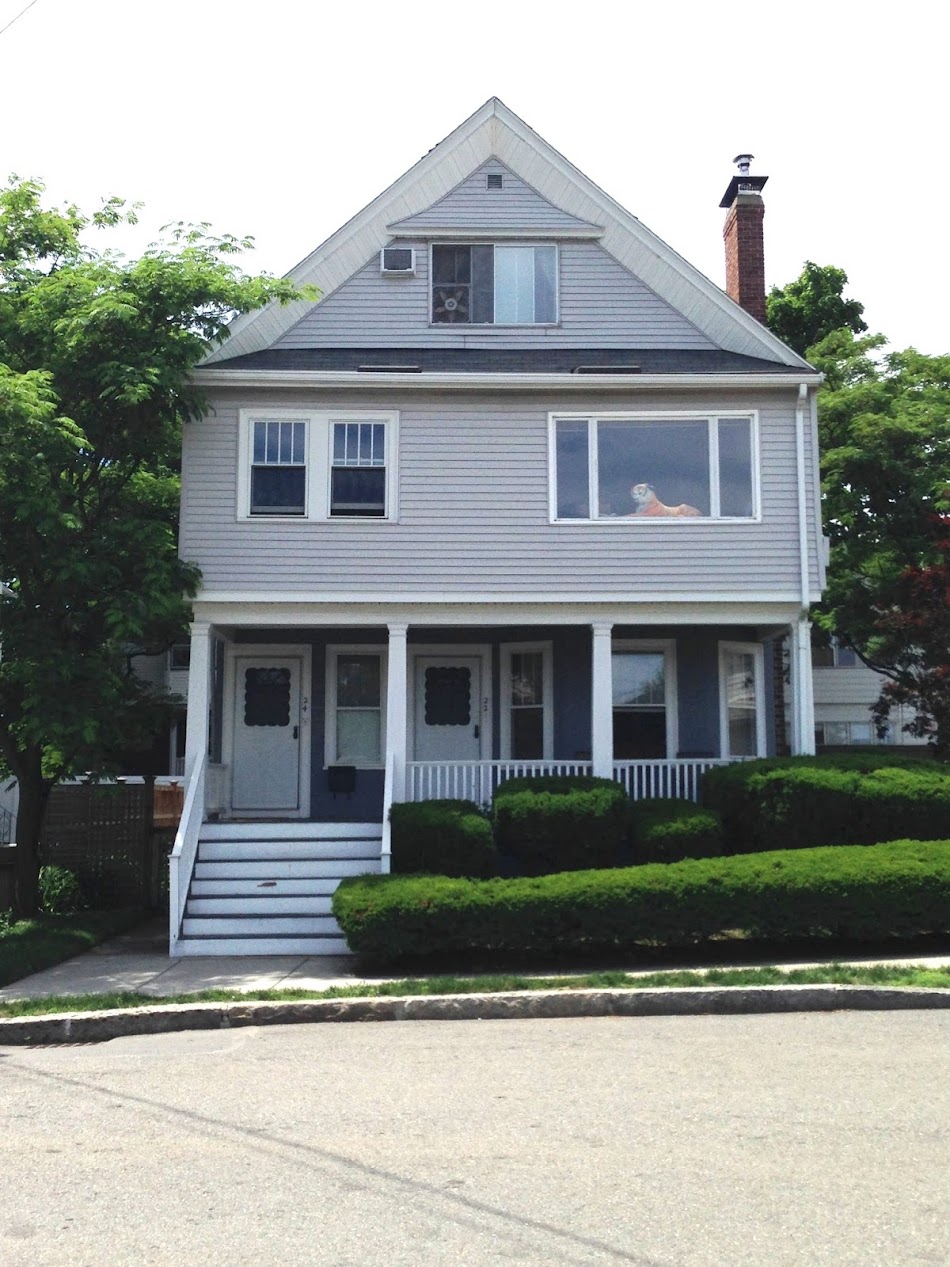 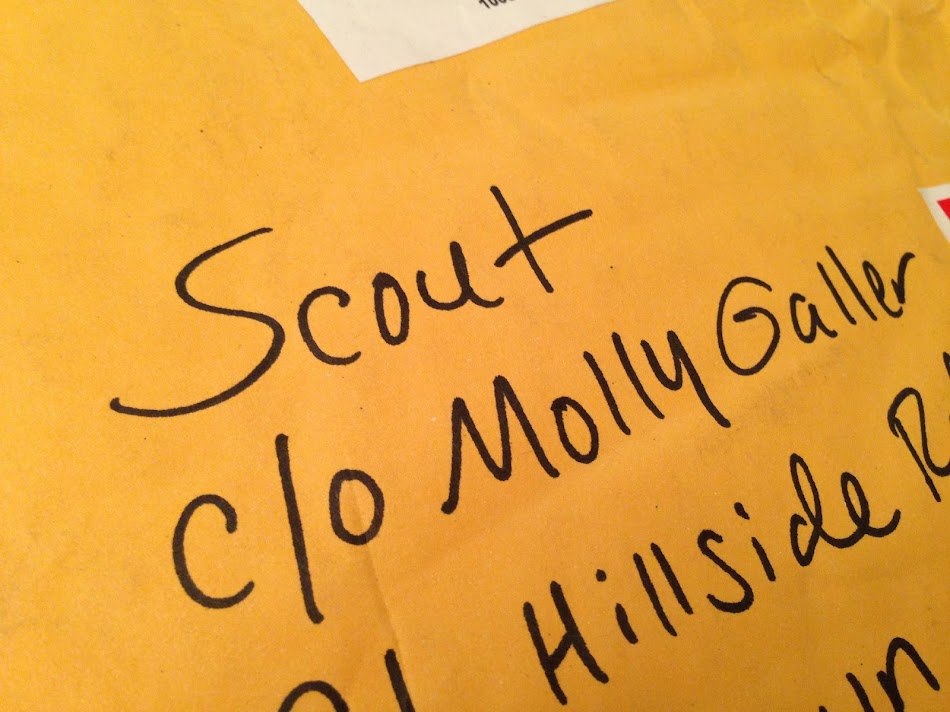 I smiled ear to ear upon seeing his name on the envelope. I might have gotten a bit choked up too.

The package was from my sister and included this adorable card which she customized to read "Welcome home Scout!" 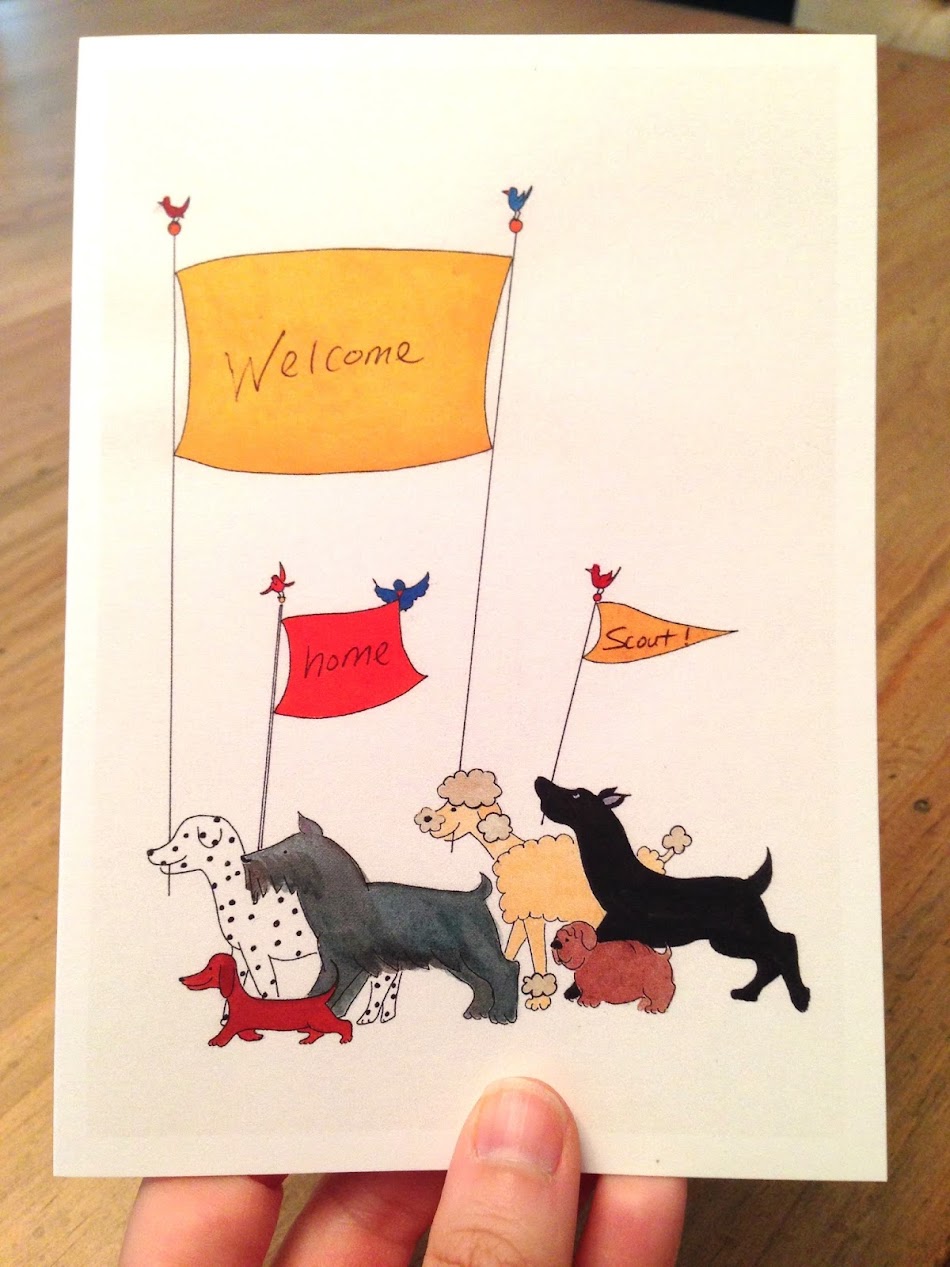 The card was accompanied by a doggy cookie in the shape of a NYC taxi (my sister lives in Harlem). 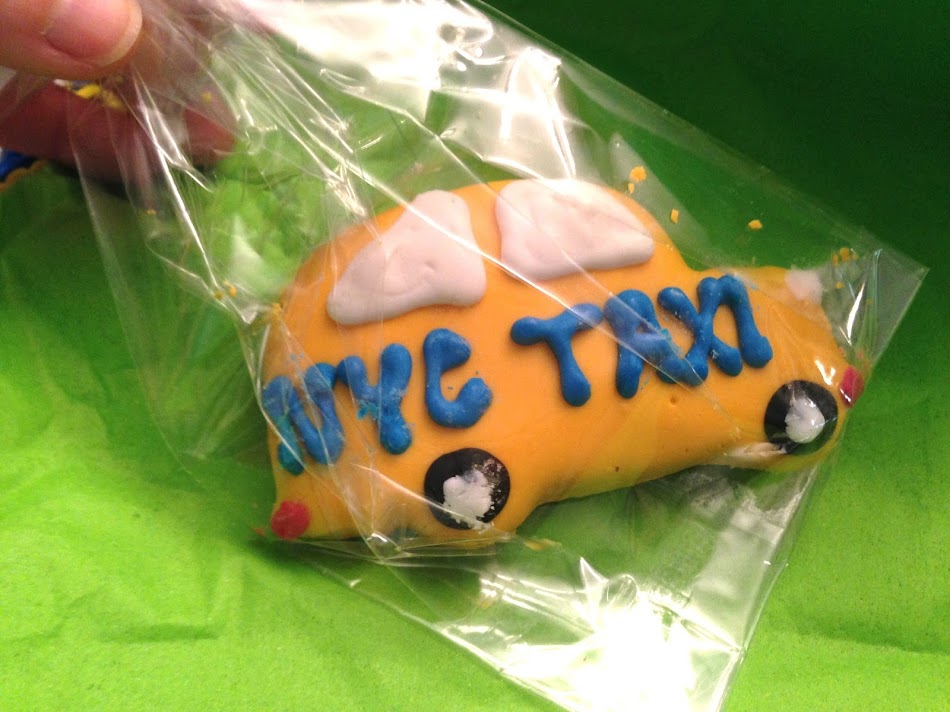 She also picked him out a new leash! It's blue and yellow with a few pops of purple. I really love the brown leather, it gives it both a regal and masculine touch. 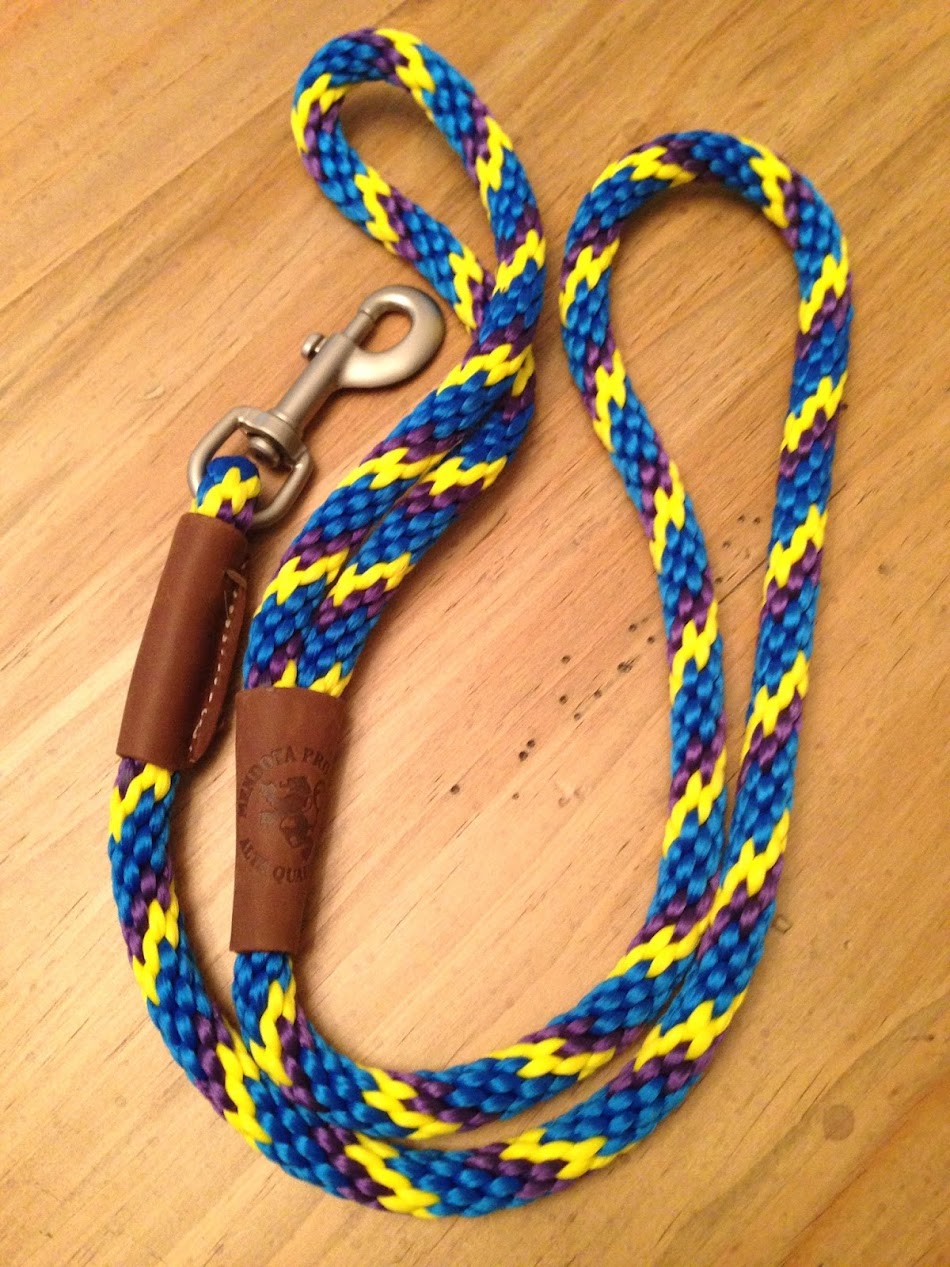 Here's Scout on his first walk on the new leash! He hasn't really mastered posing yet, as you can see. 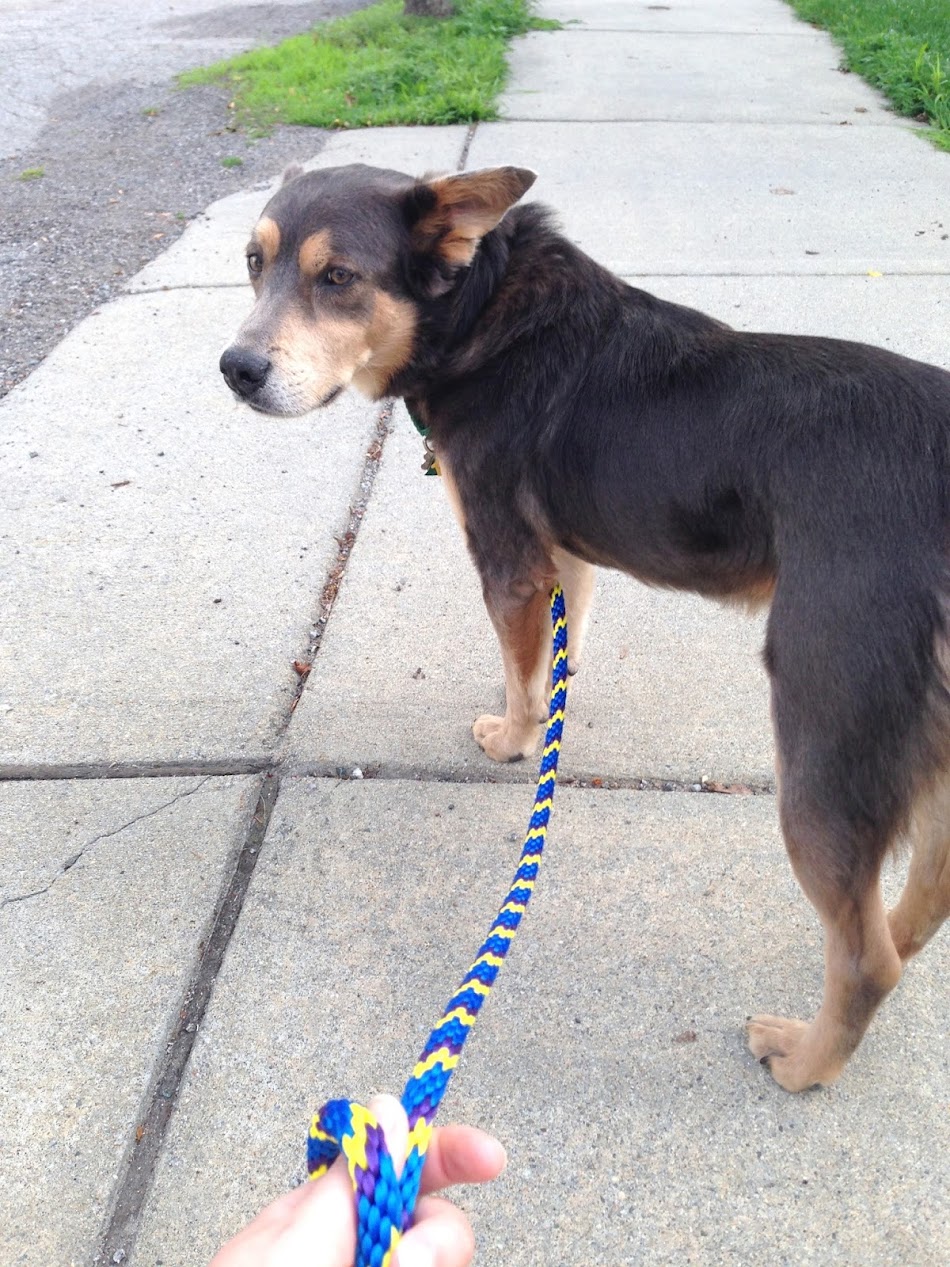 If you'd like to get one of these leashes for your pup, it's made by Mendota Products and comes in a variety of colors.

Aside from making sure Scout is stylin' as we cruise the neighborhood, this week has also involved registering his microchip, activating pet insurance, taking him to the vet and getting a dog walker. It's been a big week!

Today marks my eighth day with Scout and I have to say, it's been a roller coaster. I've been overjoyed and I've been proud, but I've also been paralyzed with anxiety and have suffered major sleep deprivation. I'm constantly asking myself, "Is he ok?" or "Does he have what he needs?" or "Is this normal?" But every time I doubt myself, this smiling face looks back at me and I realize, no matter what happens, Scout is more loved and adored now that he's ever been before, and that's what really matters. 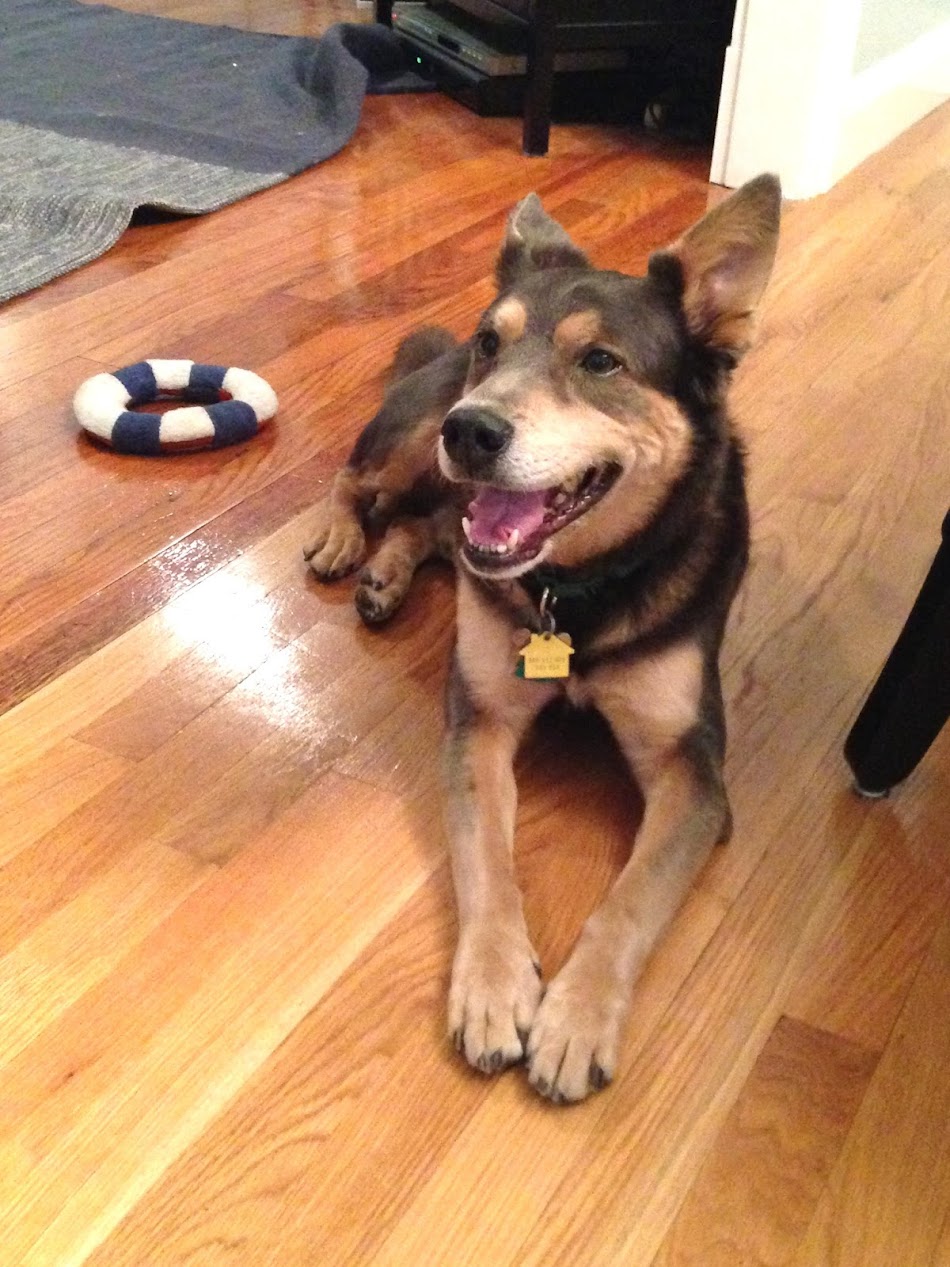 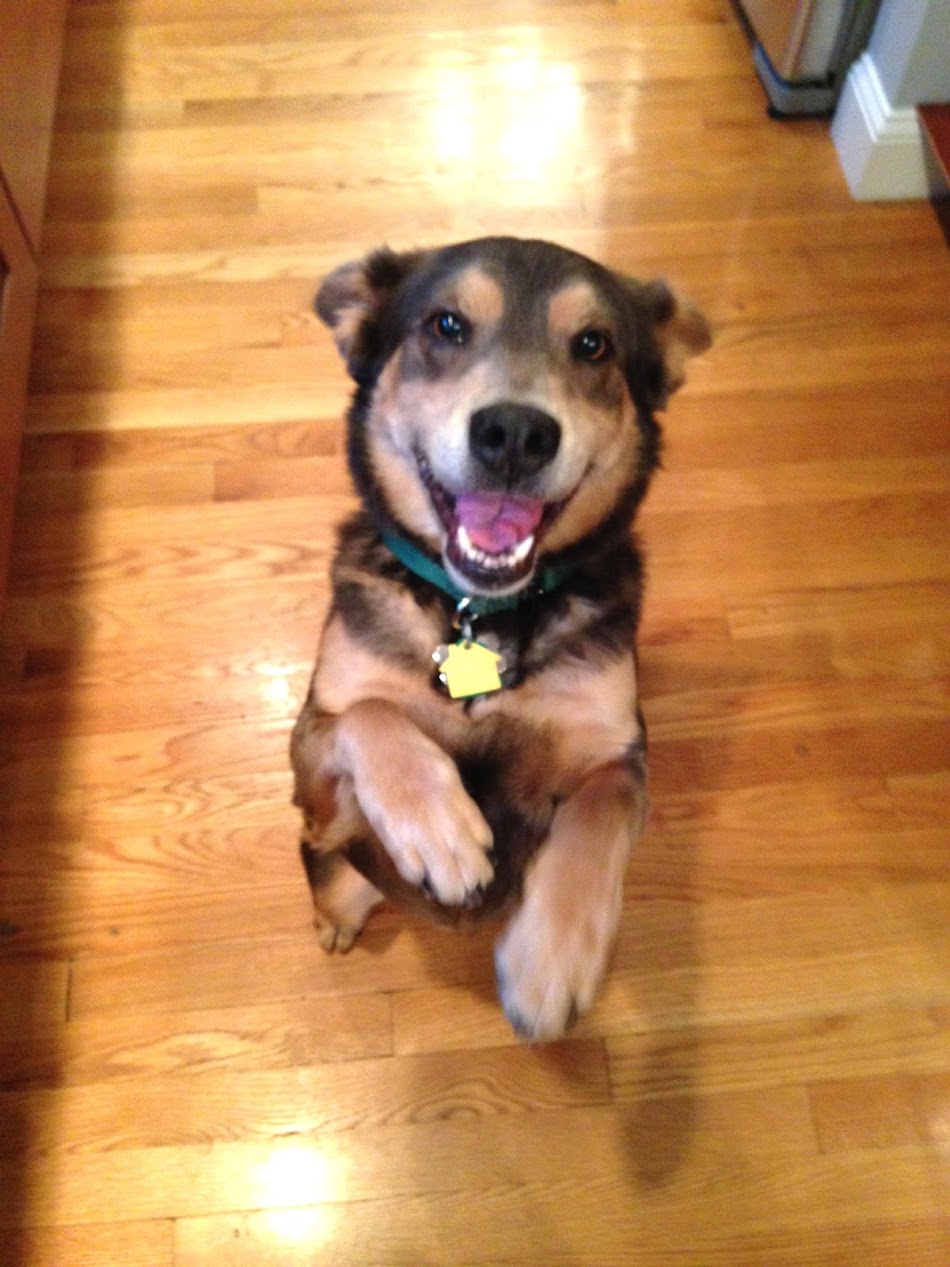 I'm particularly grateful for the friends who check in on us every day via phone, text or email and are always there to answer my crazy questions. I couldn't survive this adventure of pup parenthood without your support.

If you made it to the bottom of this novel of a post, you deserve a treat. Scout thinks so too.

Tell me, do you have a dog? Did you rescue him or her? How did you feel the first week?

END_OF_DOCUMENT_TOKEN_TO_BE_REPLACED

Today I am sharing my New Year's resolutions for 2021. In a year with so much uncertainty, the list is broken out into two categories: realistic and hopeful.

Sharing a progress report on my quest to complete my 11 resolutions for 2018.