I have been so excited to share this post with you that I waited over two weeks to publish it to ensure I had enough time to write a review worthy of the special experience.

For New Years Eve, two friends and I traveled to Puerto Rico. For four days we stayed at the Caribe Hilton (which I highly recommend), which is just minutes away from Old San Juan.

Prior to the trip, I received recommendations from two people who had been there recently - my study abroad roommate and my sister (as part of her honeymoon). They both were adamant that if we only had time for one meal in Old San Juan, it had to be at El Picoteo in the Hotel Convento.

So on New Years Day, we hopped into a cab and headed toward the city. Our cab driver told us to walk straight down the main drag and once we got to the end, Hotel Convento would be just up the street on the right.

It wasn't immediately clear where the restaurant was within the hotel and thank goodness we asked, because it was up a tiny stair case inside the hotel's lobby. 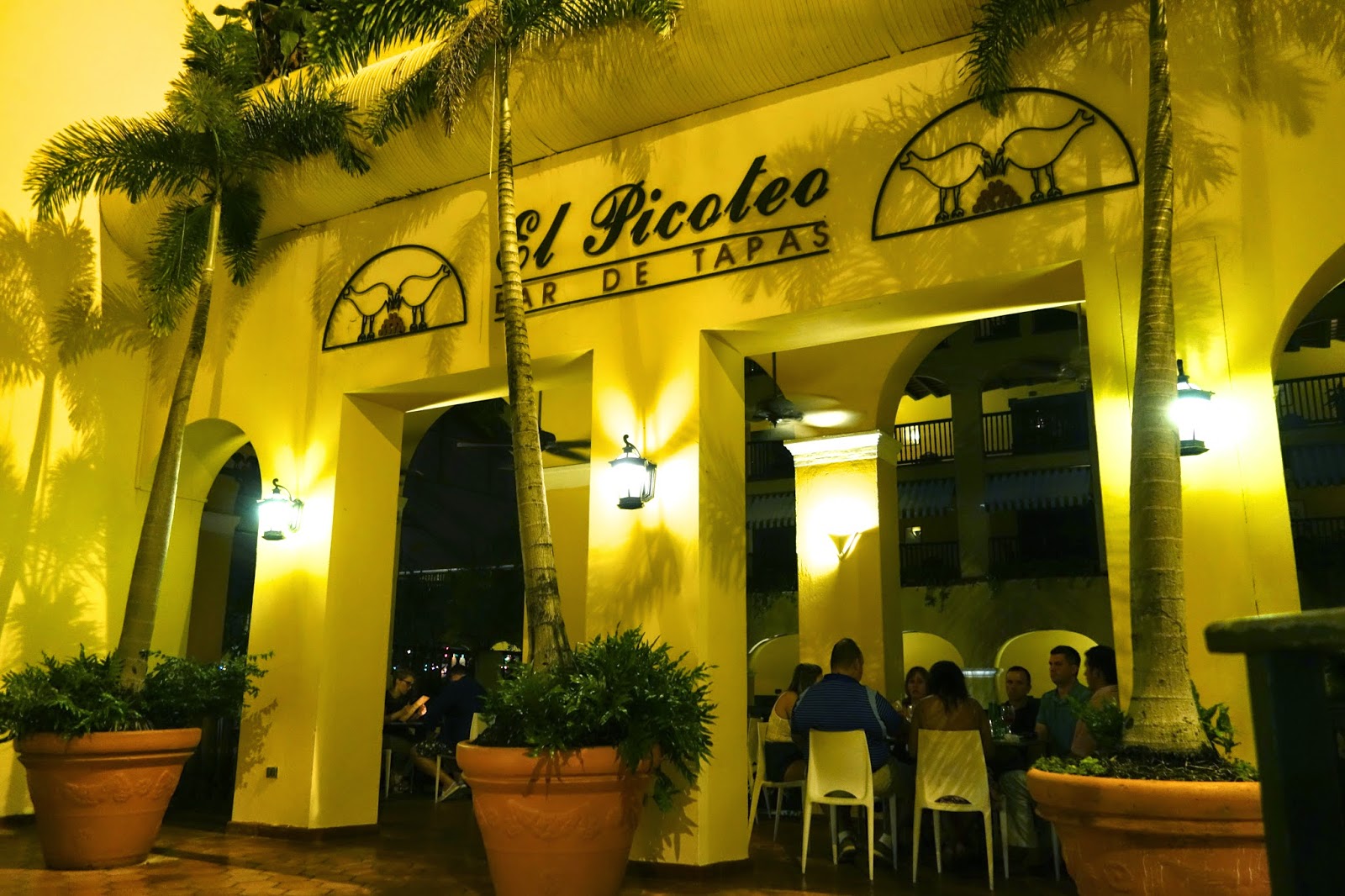 El Picoteo is inside the hotel, but faces a courtyard covered in greenery. 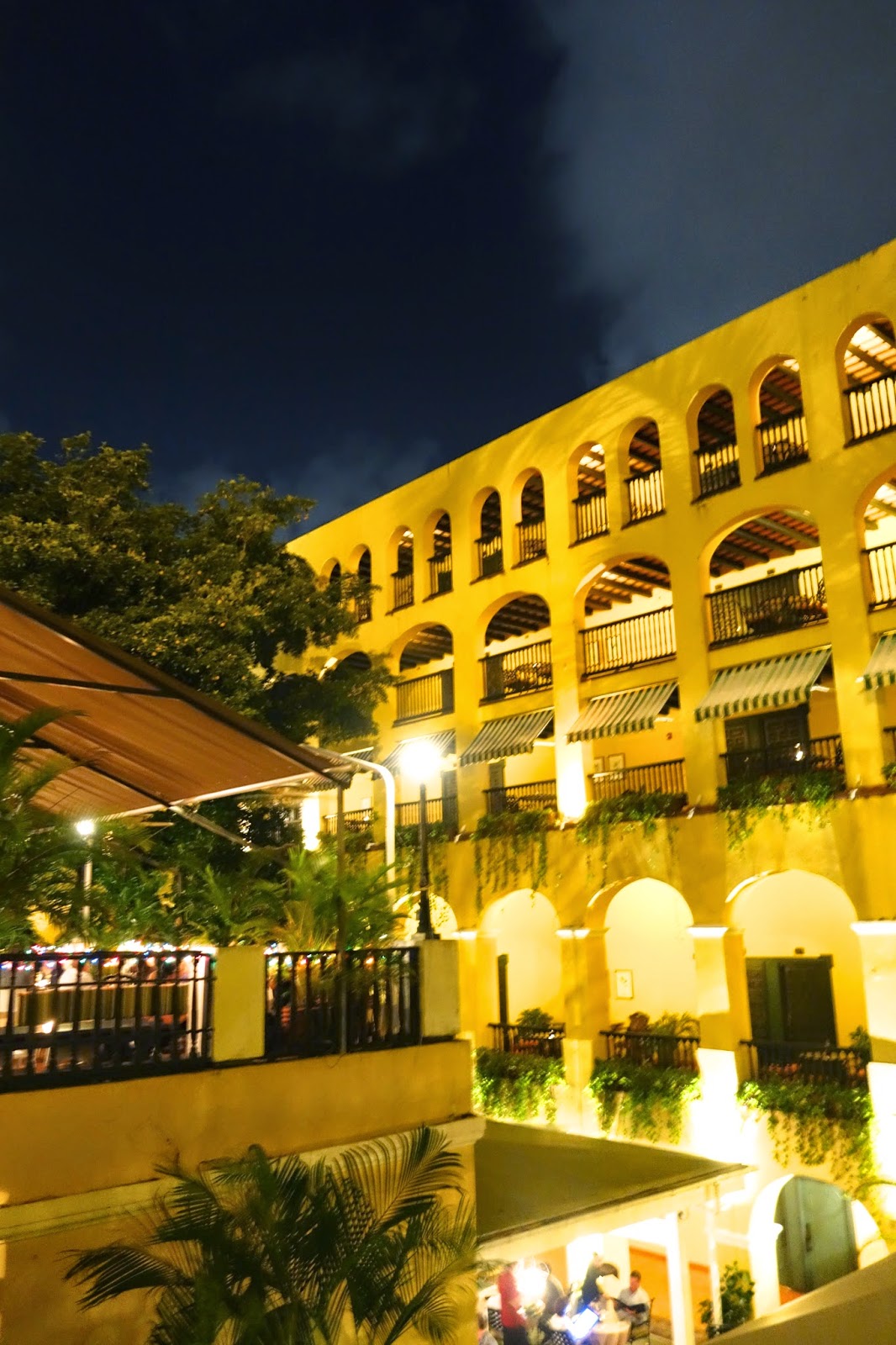 The restaurant has a patio that juts out into the courtyard. It feels like an outdoor deck though technically, it's still inside the hotel. 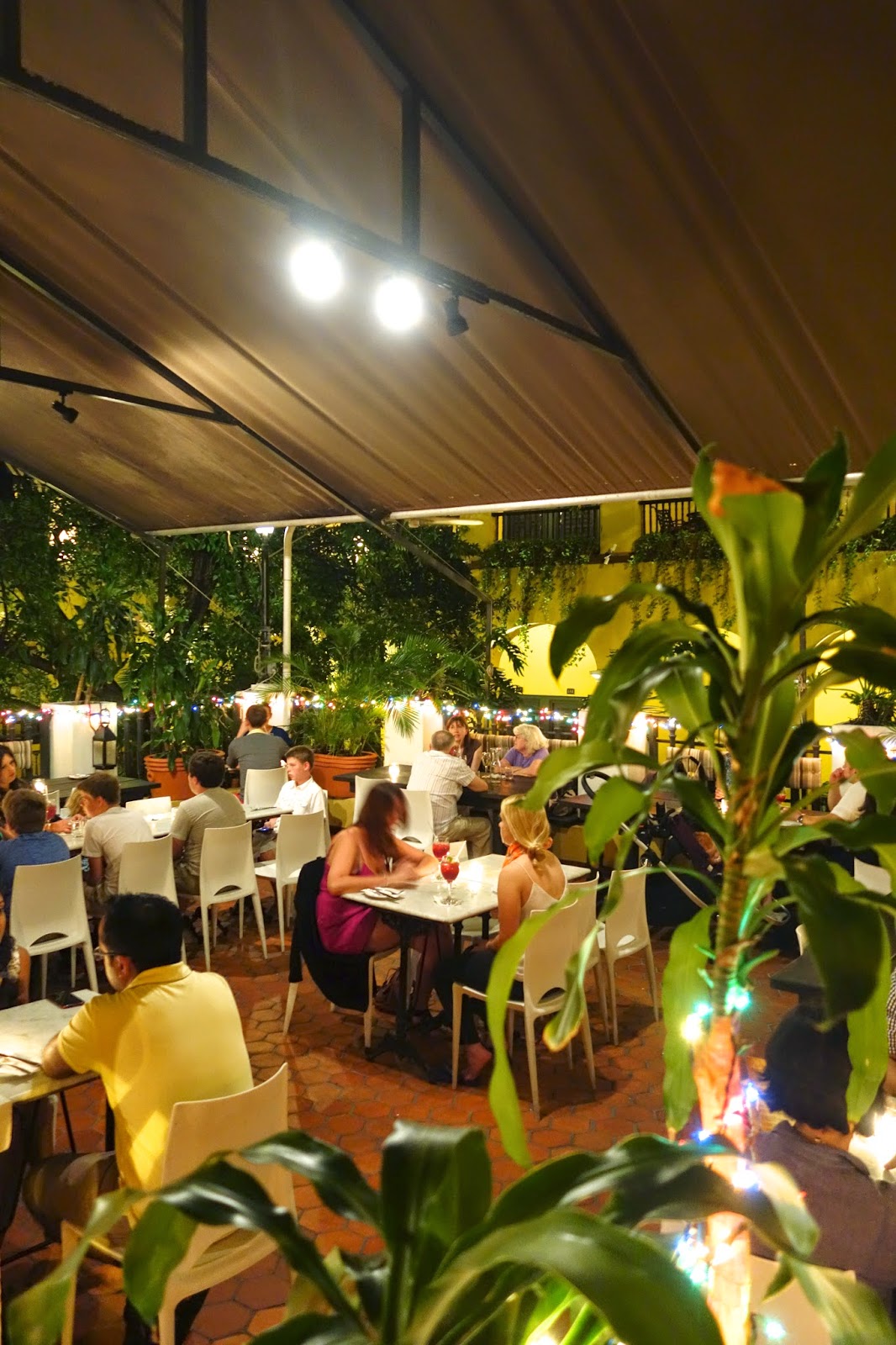 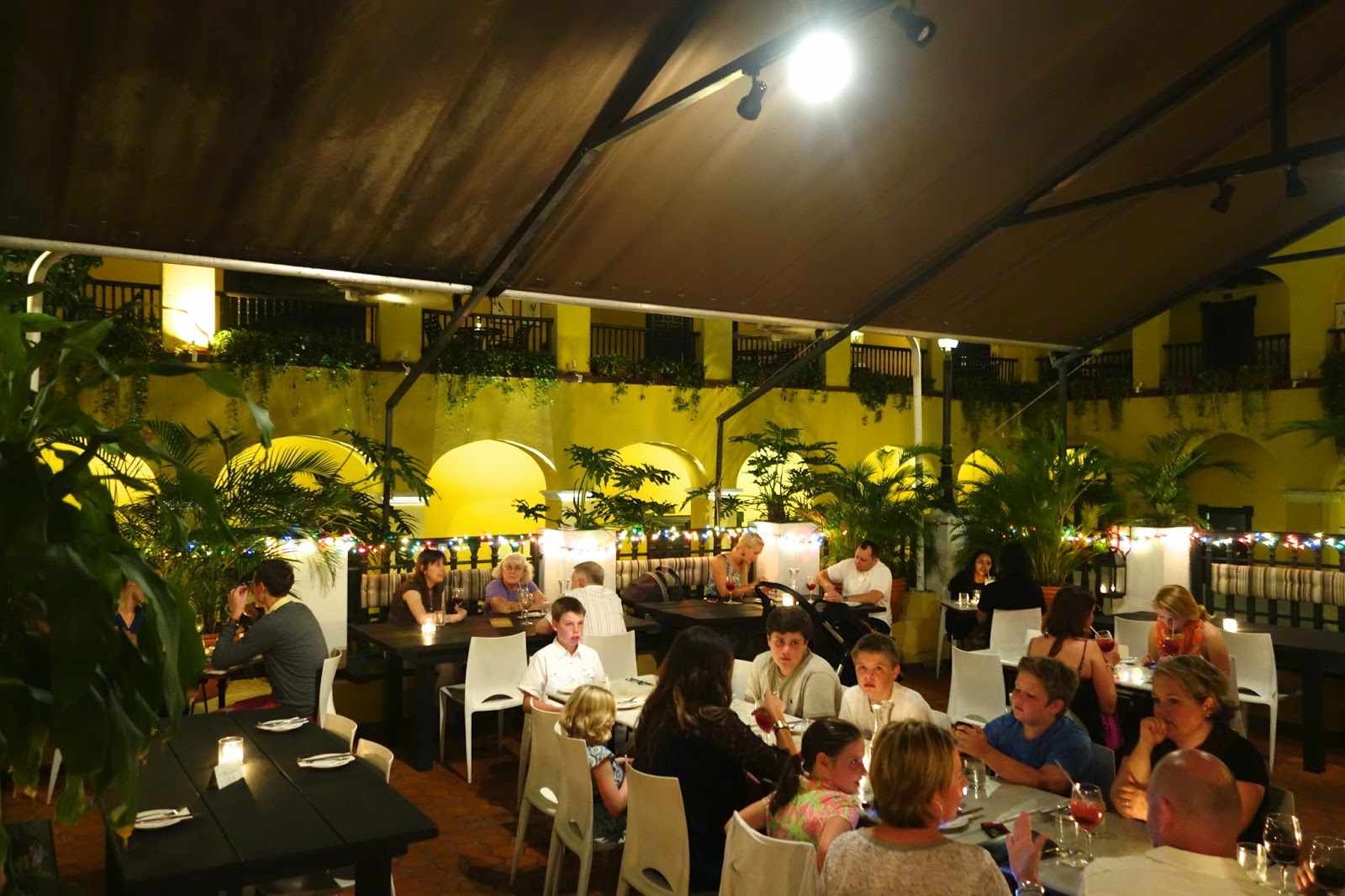 The restaurant had several reservations for large parties, so they asked if we'd be open to sitting on their front patio. Front patio? We didn't even know they had one!

From our table, we had great views of a busy street with tons of people walking by. We later learned that just a few doors up was a Ben & Jerrys. Ha!

Once we were seated, our waitress immediately asked if she could interest us in some sangria. Before we could answer, she proclaimed, "We have three kinds - red, white and champagne." Hold. The. Phone. How have I lived 30 years without knowing people make champagne sangria?

Of course we ordered a pitcher of the elusive champagne sangria, a delightful choice for our first alcoholic beverages of 2015. 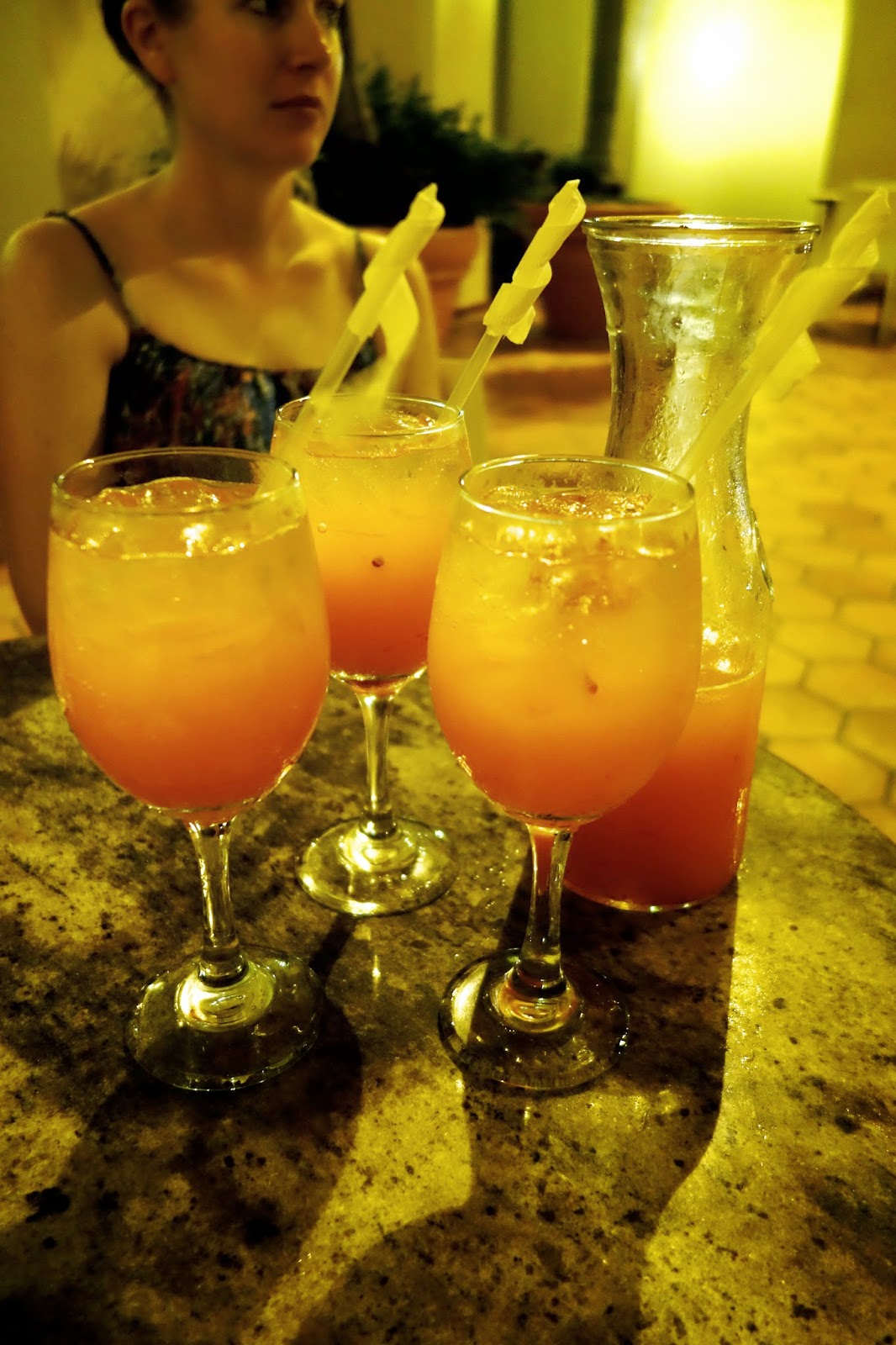 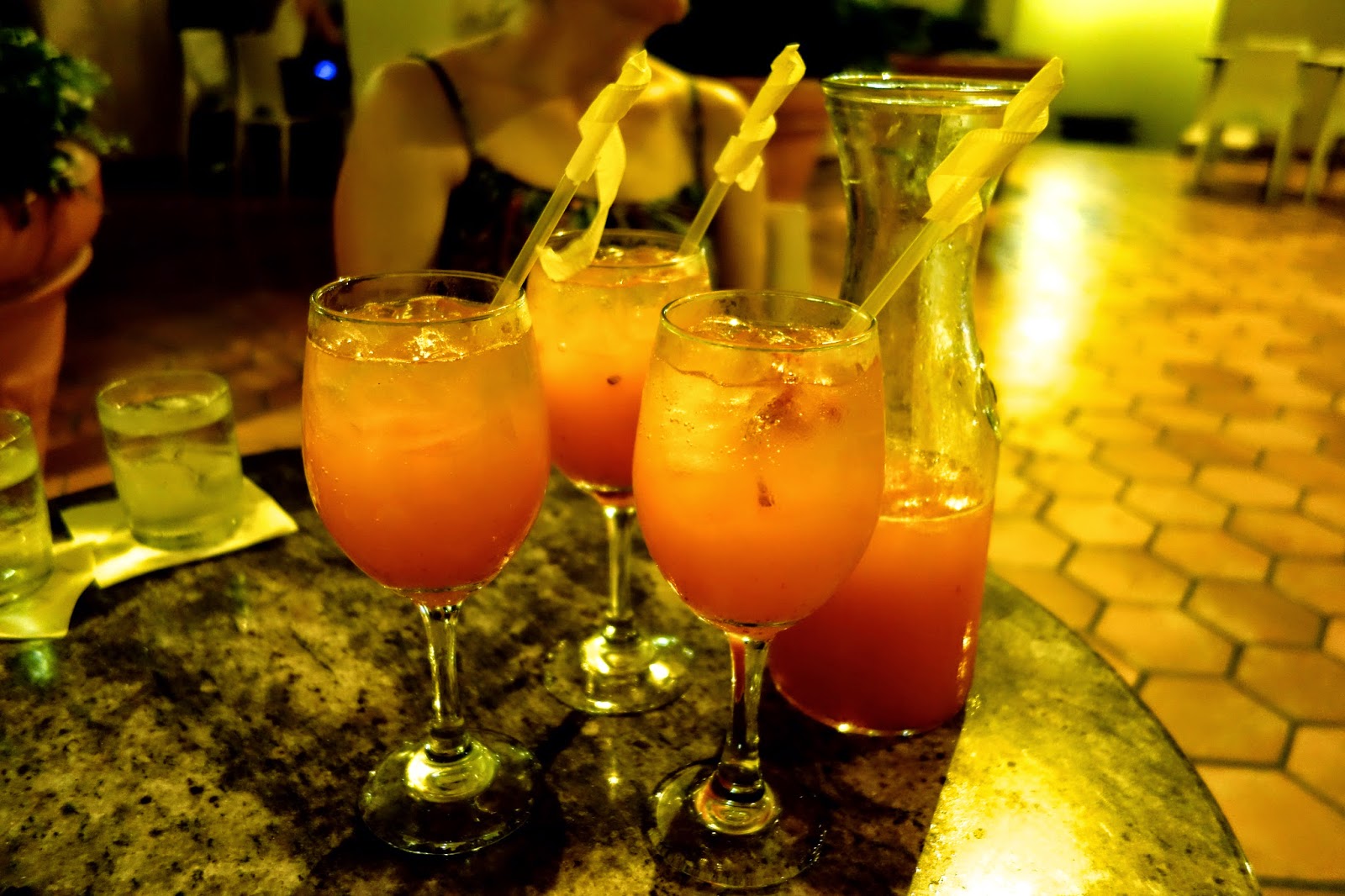 Our glasses were full when they arrived, as was our carafe. With this order, we each got two full glasses.

While sipping on our sangria, we scoured the menu. We eventually decided on six plates to share and surprise! They all arrived at the exact same time. The server carrying out our food looked at us, very perplexed, and right then, like a sangria fairy godmother, our waitress swooped in and said, "Need some more room on the table? Ladies, we can finish this." She then picked up our carafe of sangria, topped each of us off and disappeared with the empty pitcher.

When she walked away, we were left with this: 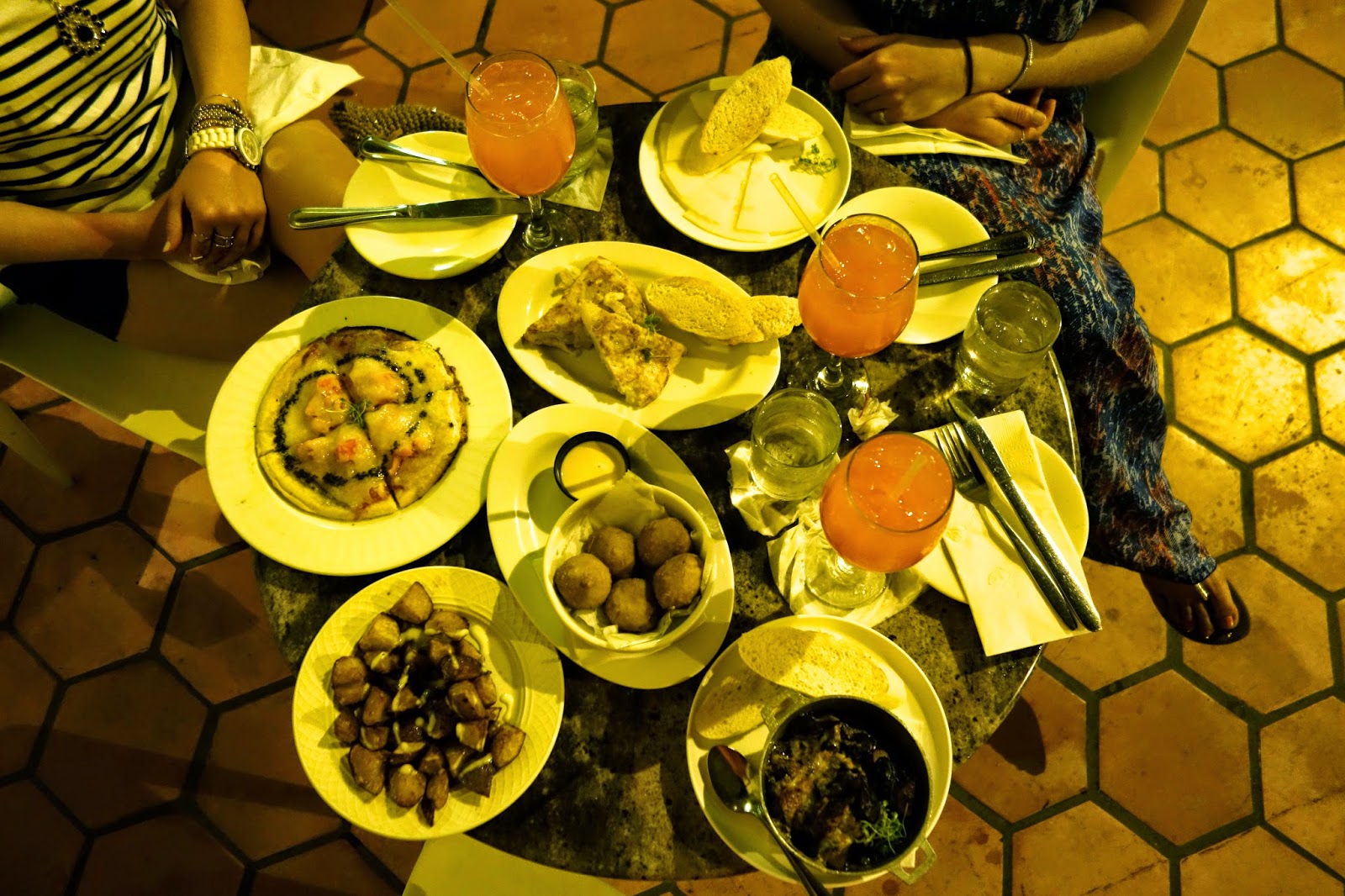 The first plate we attacked was the Manchego cheese, drizzled with truffle honey. Let me tell you, truffle honey is absolute food euphoria. 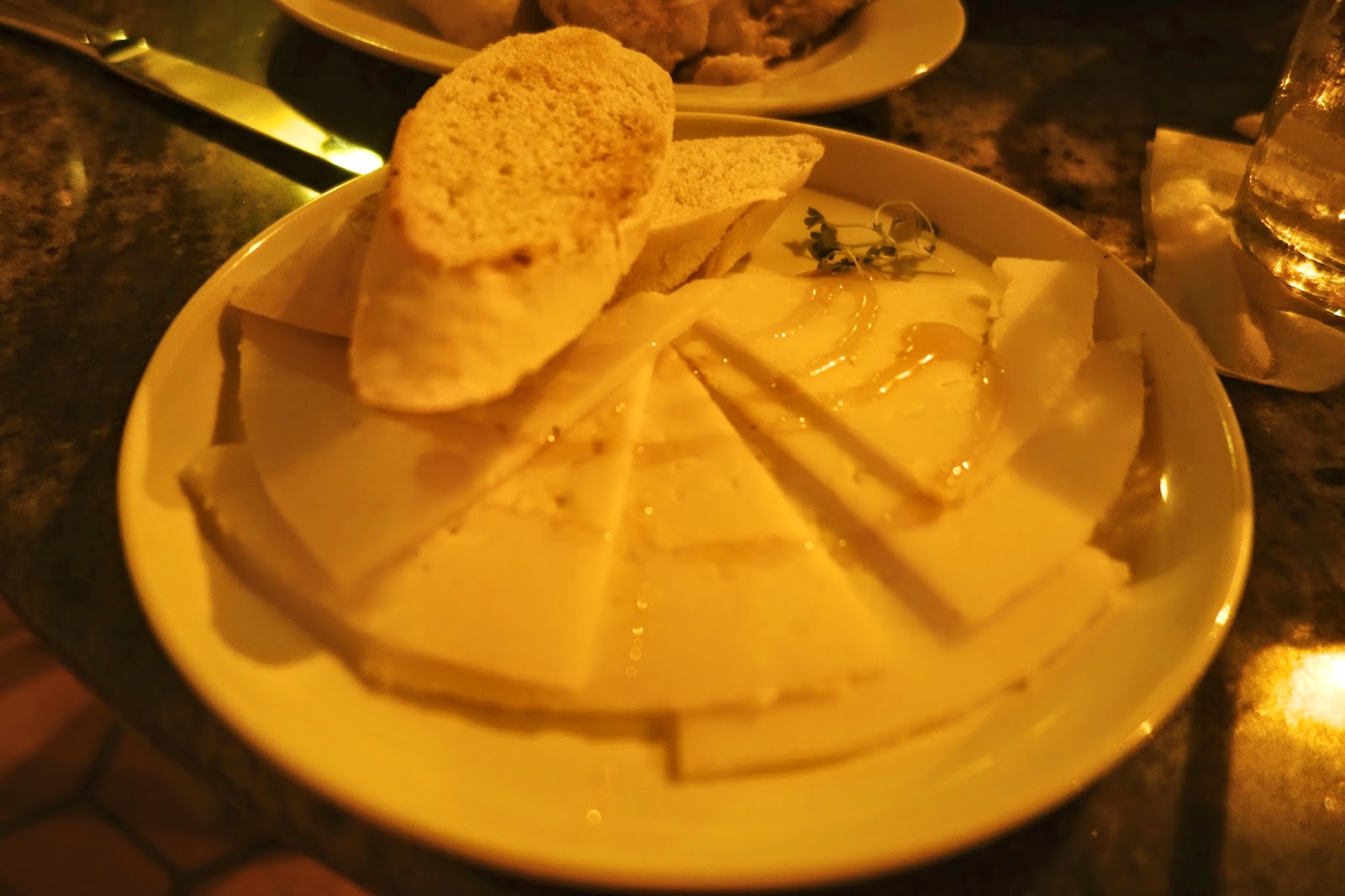 We kept the Manchego party going with a Manchego, tomato and pesto pizza. The pizza was a bit oily, but the pesto was yummy and there were a ton of tomatoes hidden beneath all of that cheese. 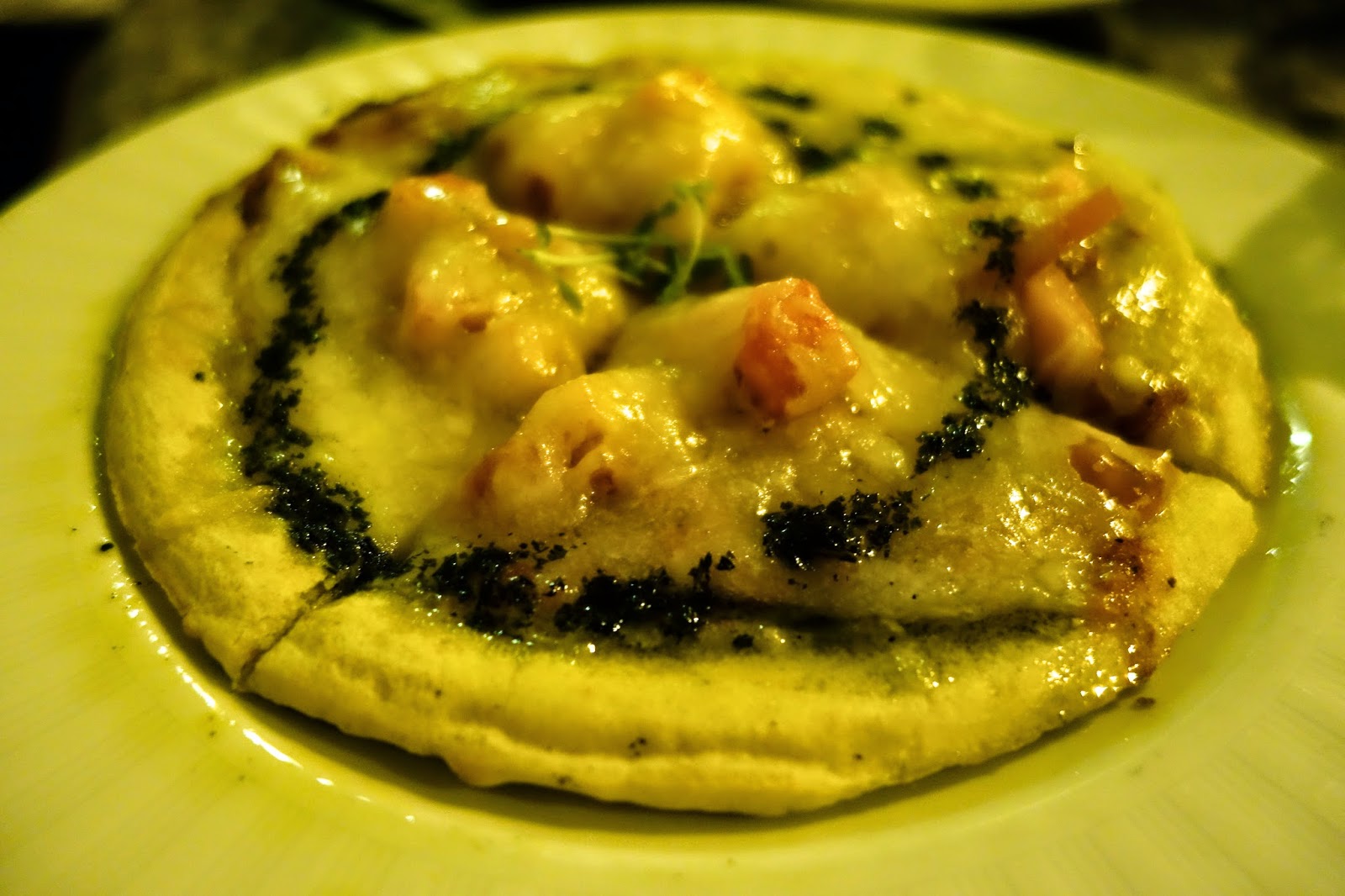 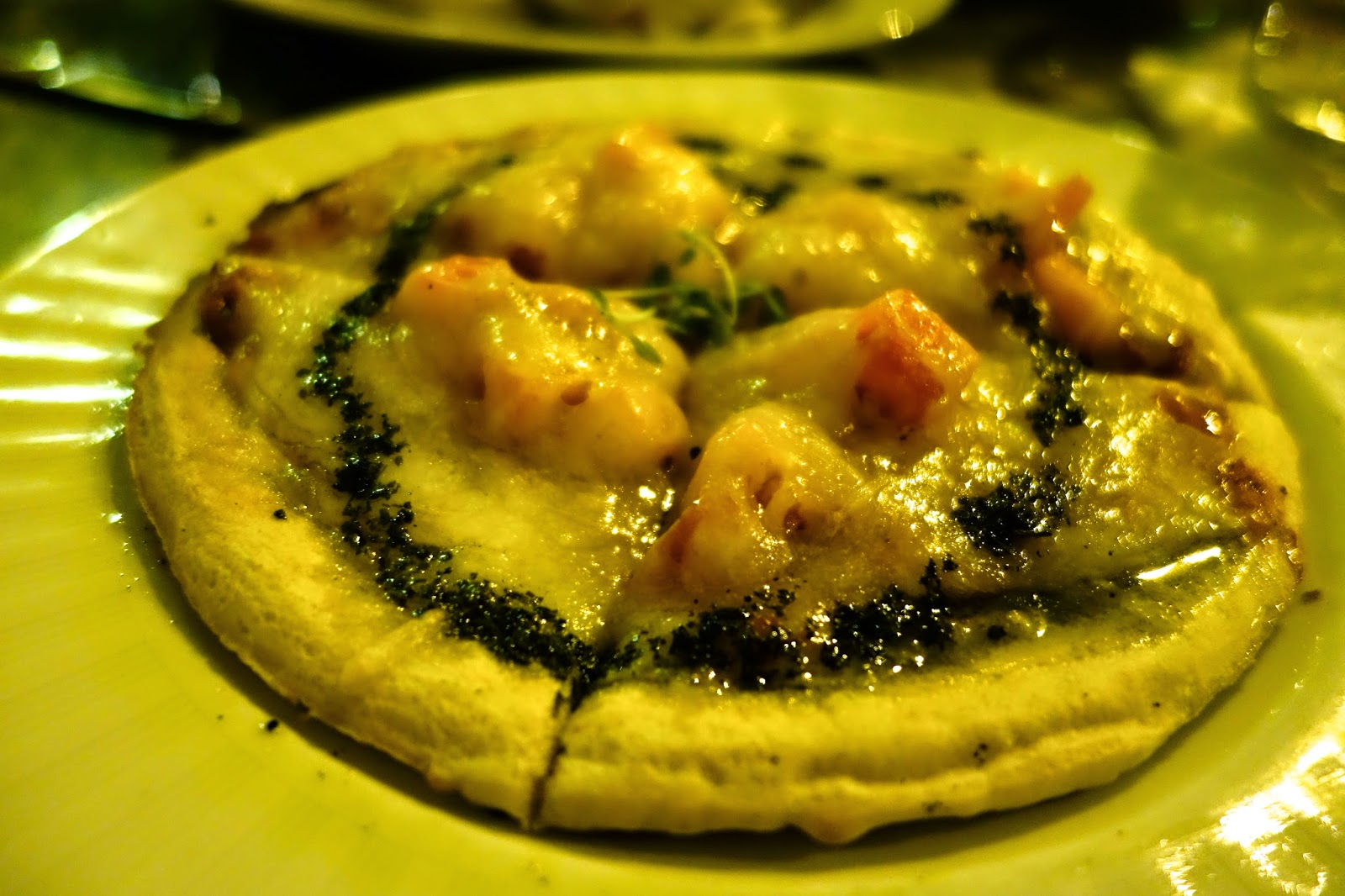 Now, you can't have a tapas dinner without tortilla española. The traditional Spanish dish, a potato and onion omelette, is one I fell in love with during my year abroad in Spain. The El Picoteo version of the dish had a bit more zest than others I've had. It was very tasty. 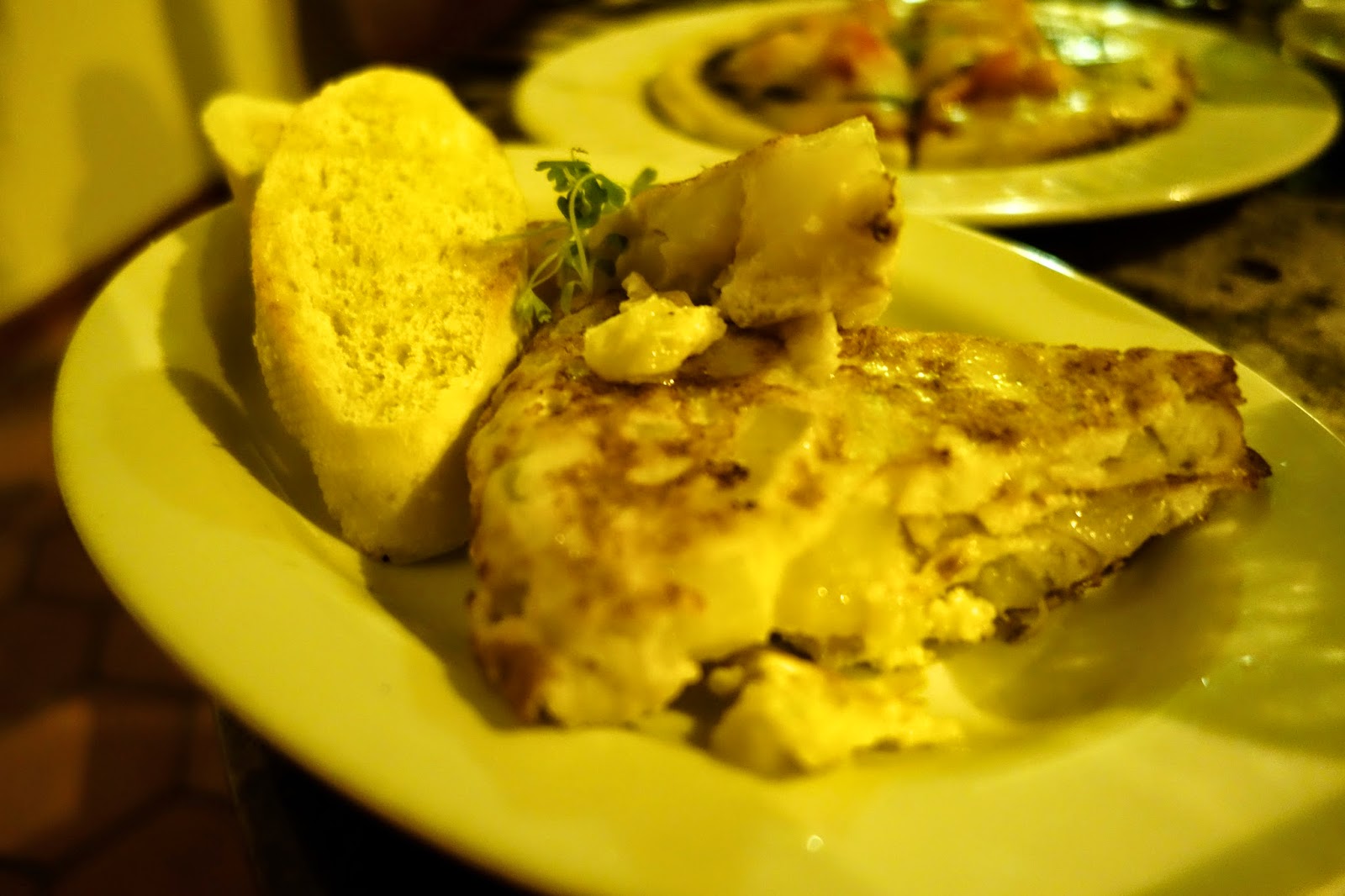 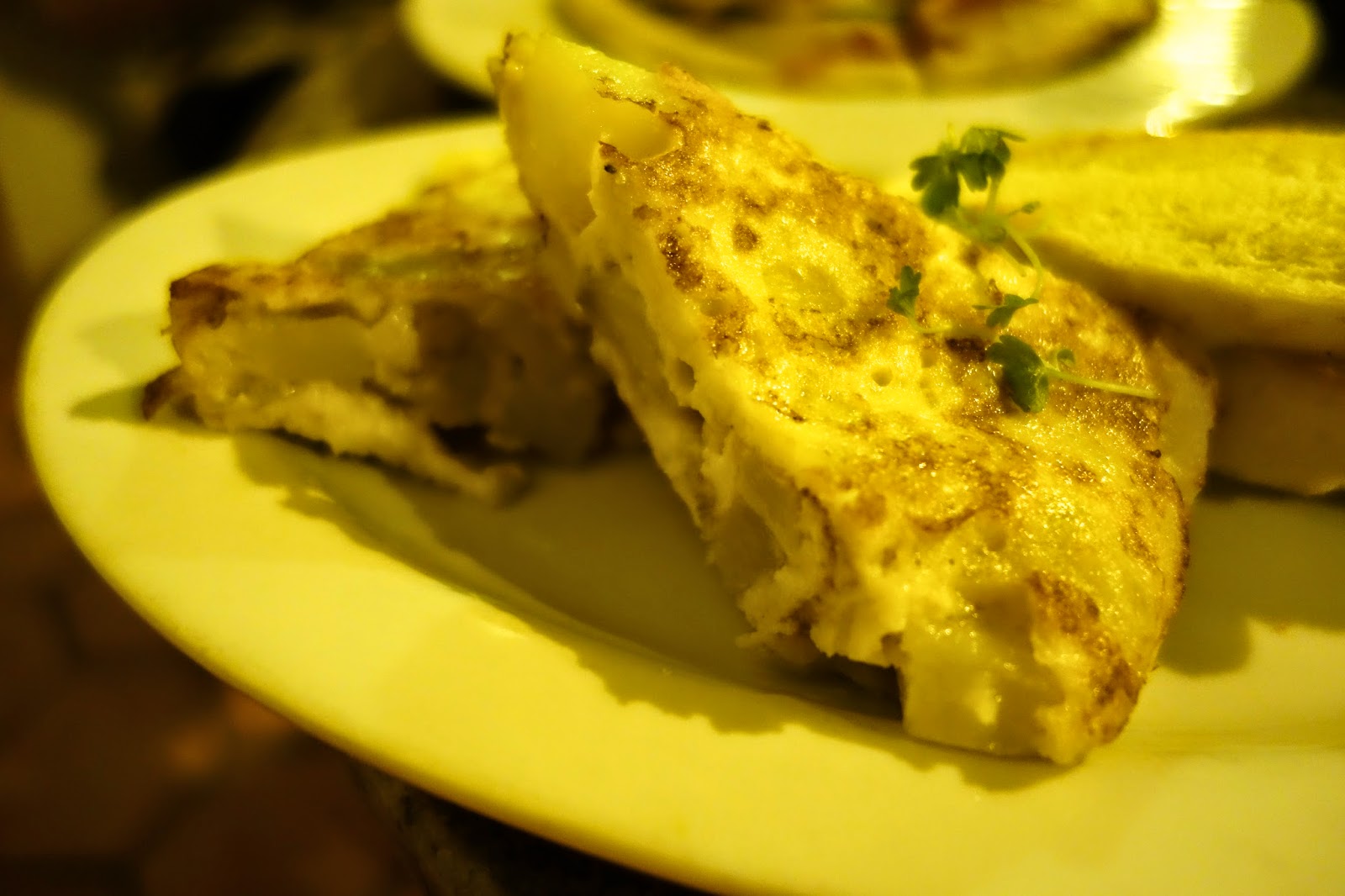 The one meat eater at the table selected the croquetas de pollo (chicken croquettes). When I asked her to describe them, she commented, "These are doughy on the outside, very soft on the inside. You can taste garlic, salt and pepper. They are best when dunked in the aioli." 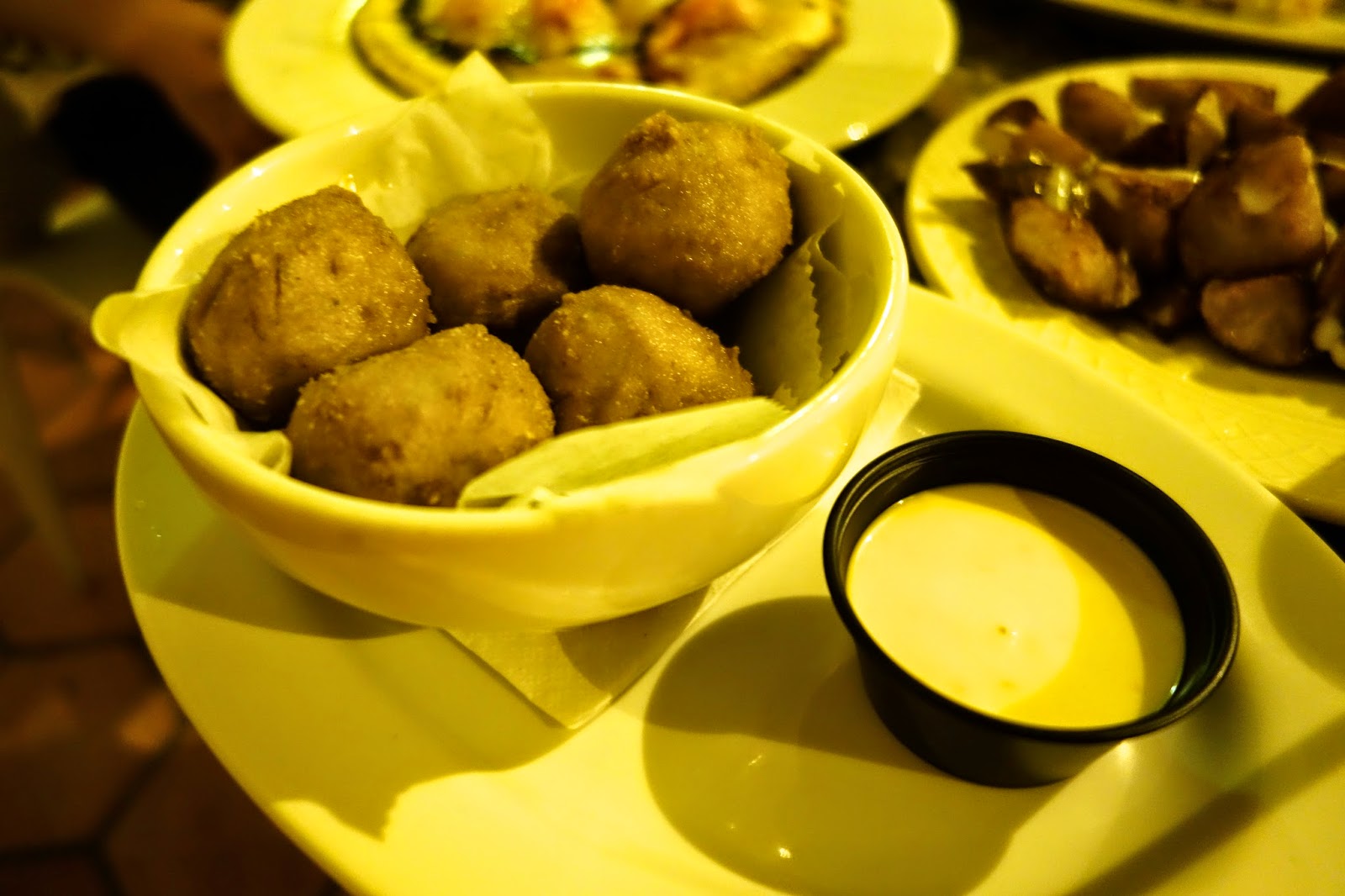 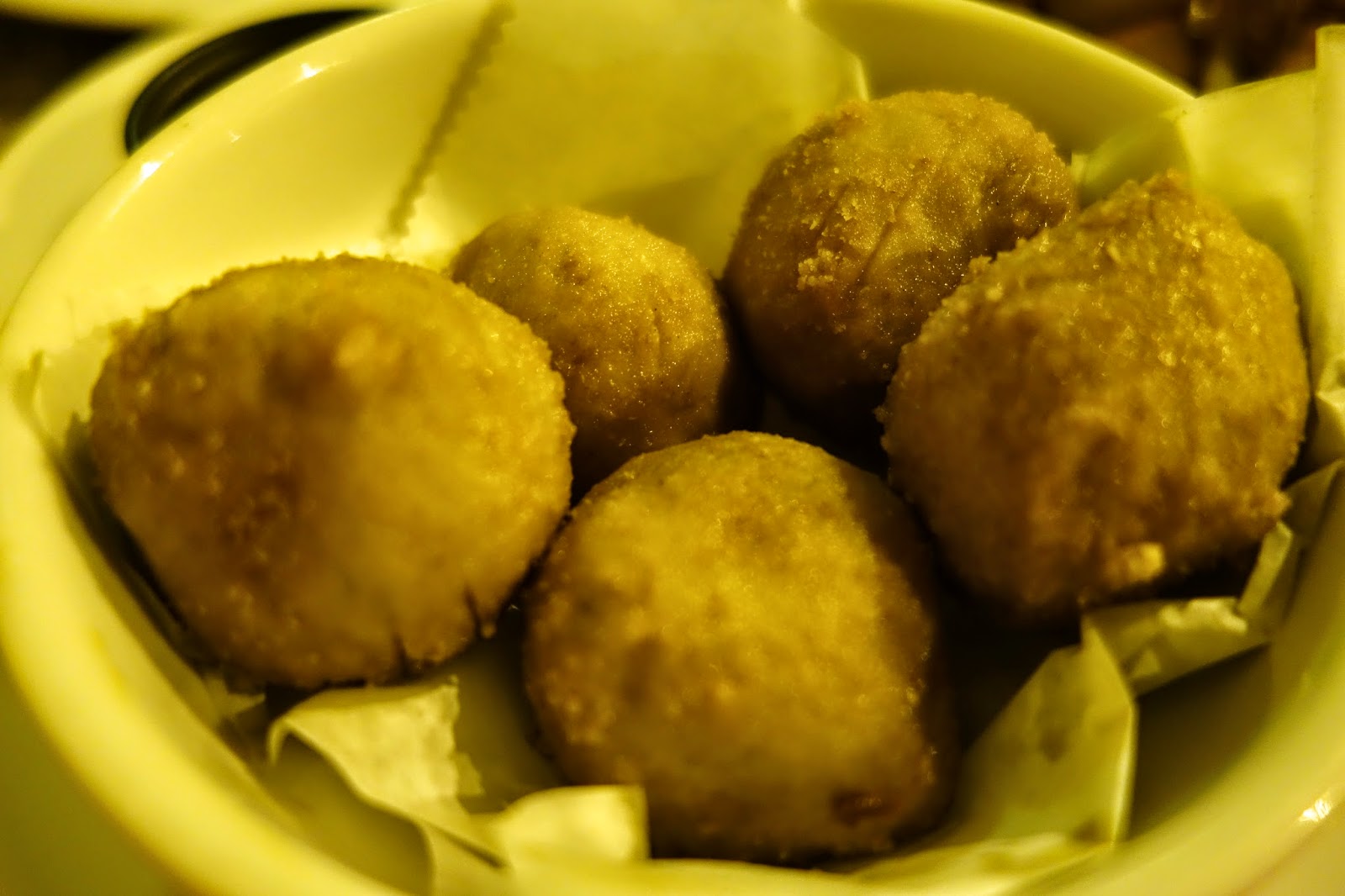 We got some kick from one of my all time favorite tapas dishes, patatas bravas. The potatoes were expertly crisped and then garnished with a spicy aioli. 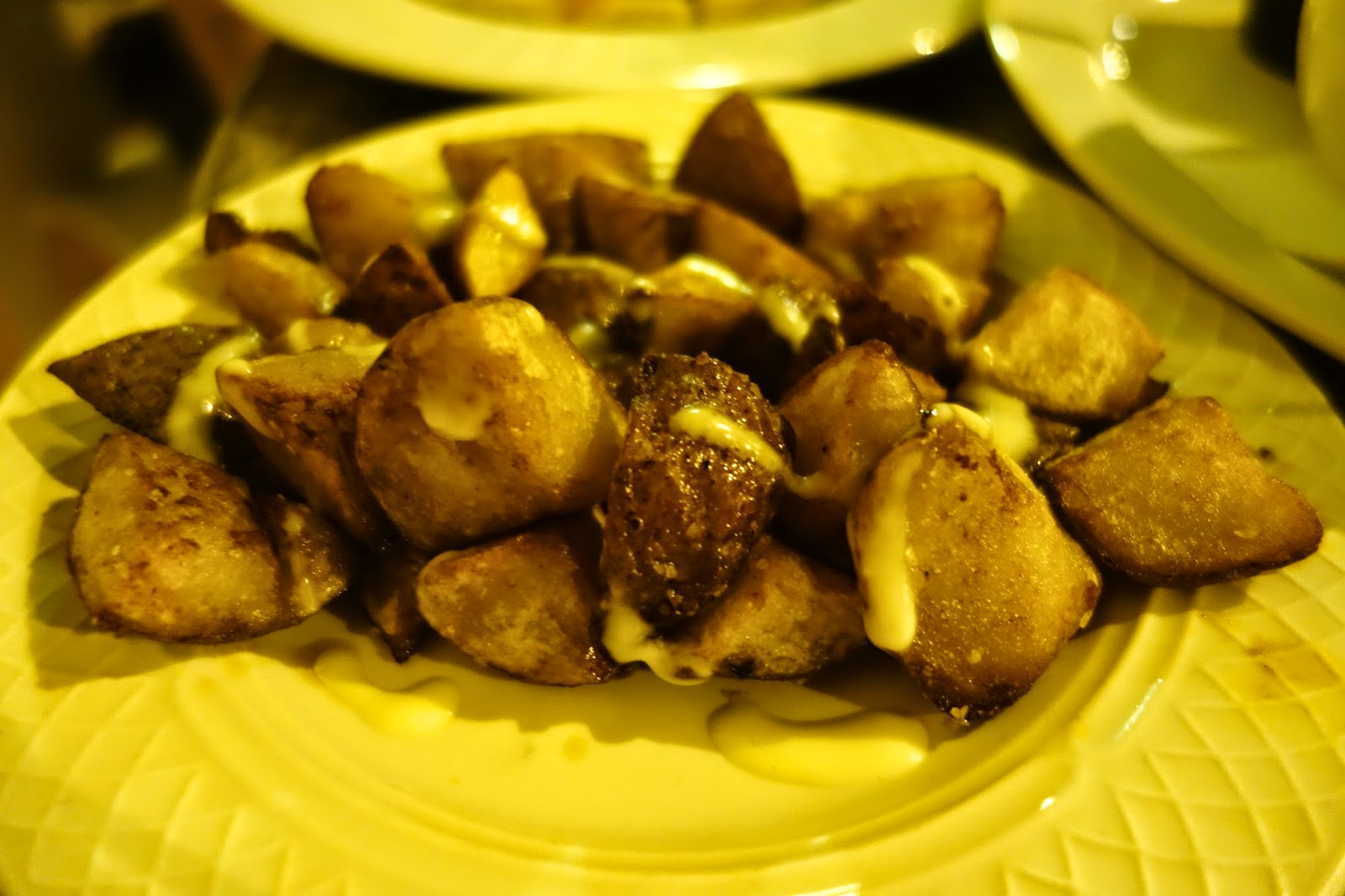 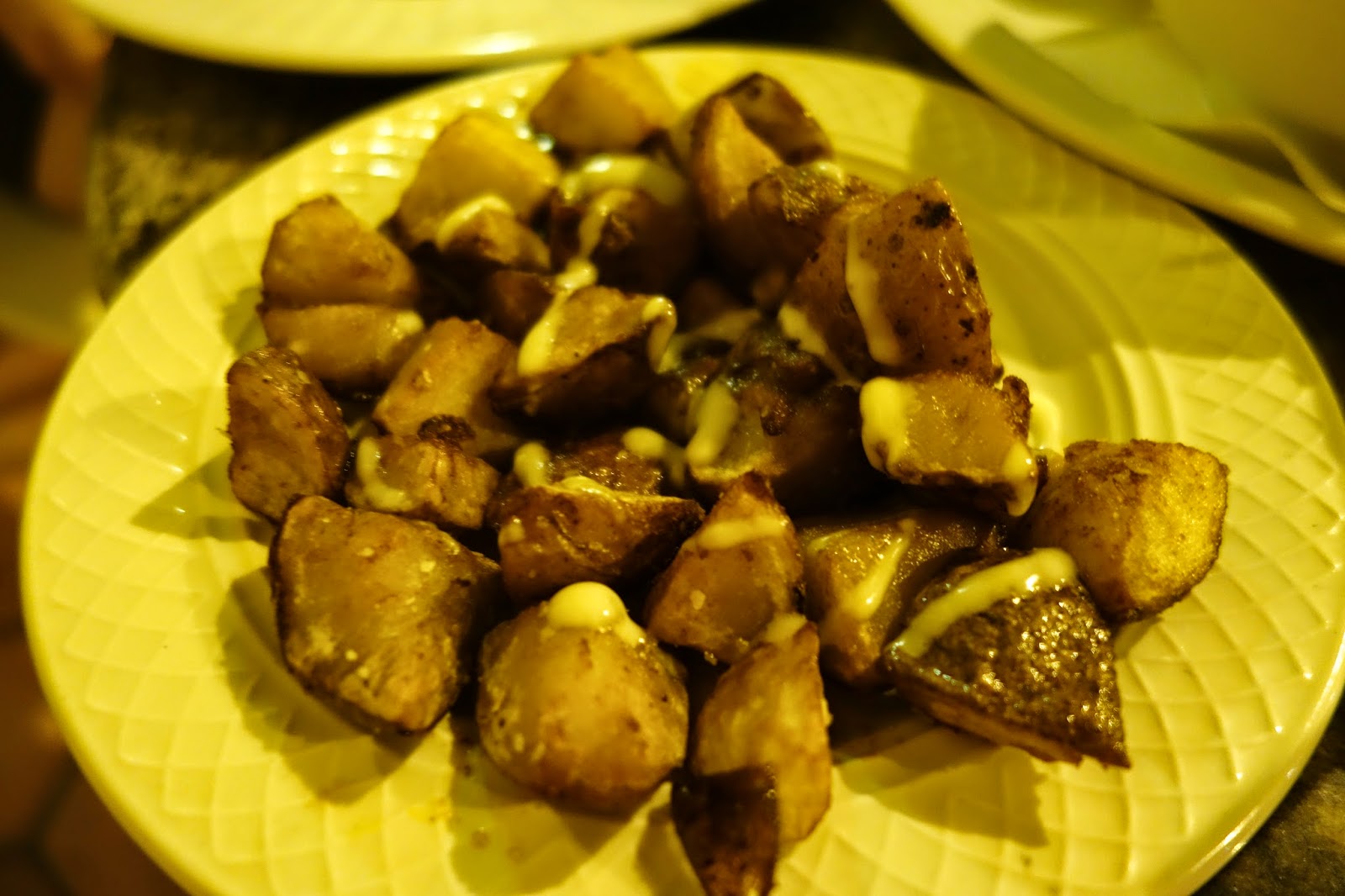 Our sixth and final dish was the champiñones al jerez, which is mushrooms cooked in sherry. This preparation was so delicious and flavorful. 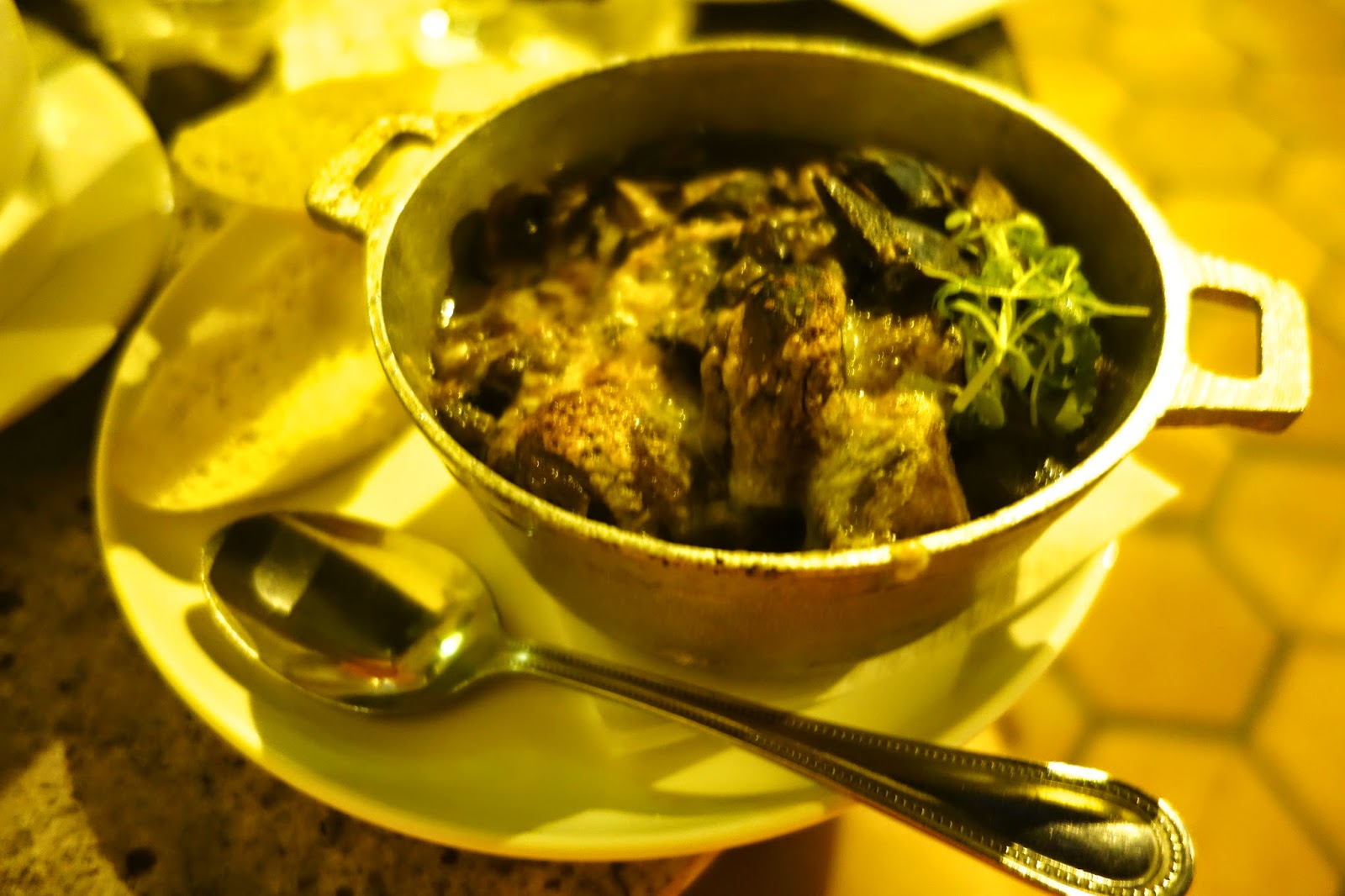 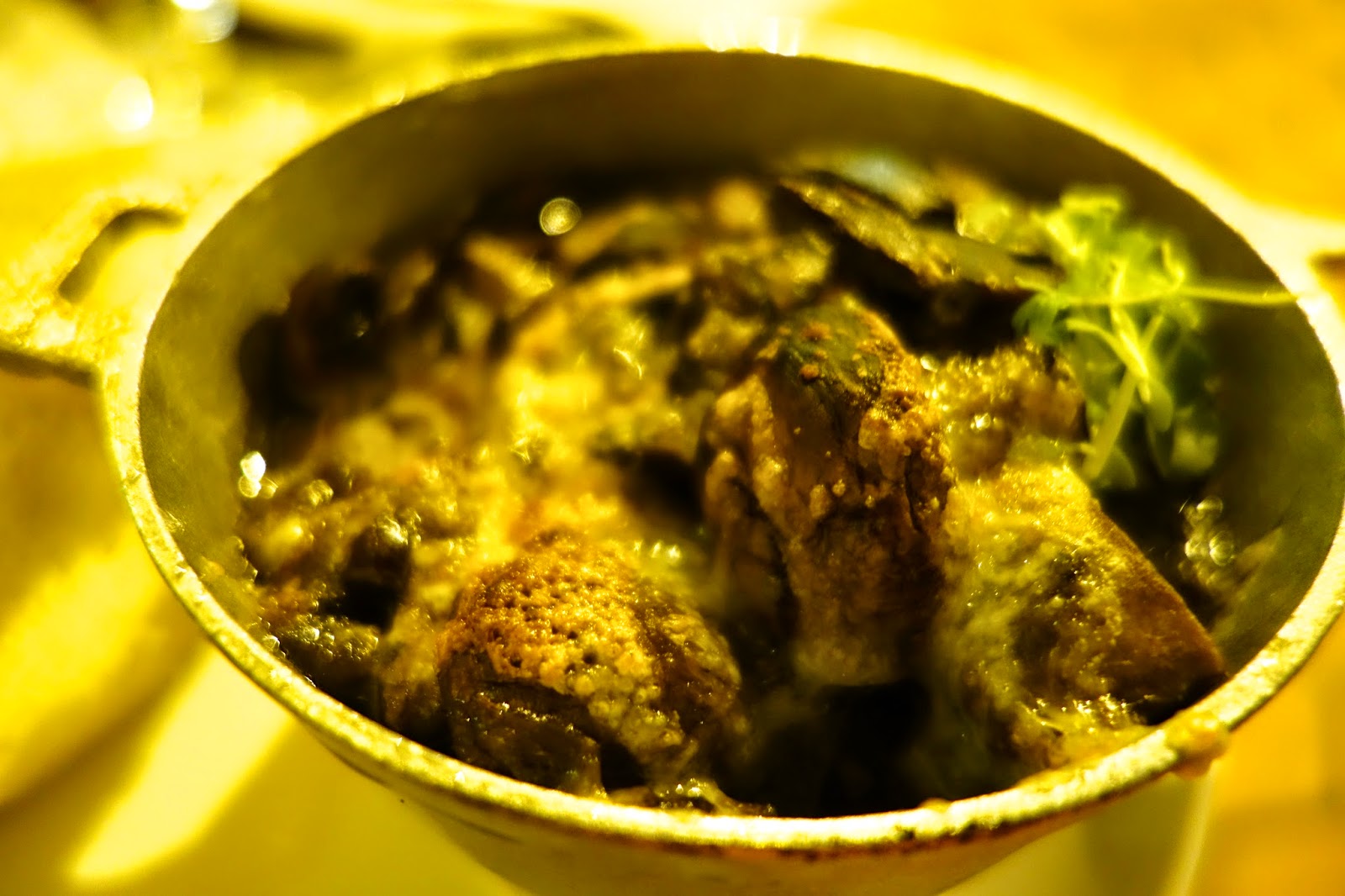 The thing about tapas-style dining is that when you order, you always fear you didn't get enough and when you tap out (always with food left on the table), you ask yourself, "What were we thinking?" That chain of events most definitely happened at the end of this meal.

The atmosphere at El Picoteo was magical - from the glittering courtyard patio to the view of the city passing by to the surprise champagne sangria. When it comes to the food, El Picoteo's presentation is nothing fancy, but the execution is on point. This was one of the best meals we had the whole trip.

If you are planning a getaway to San Juan, be sure El Picoteo is on your list!

Agh! Would you believe we almost went here? We had to make a run to the airport (from Fajardo where we were staying) to pick up my sister's boyfriend and briefly talked about heading into Old San Juan beforehand for dinner and this was one of the spots on our list. We ended up just having dinner in though. I'm bummed now. Champagne sangria alone sounds worth it!

Oh man! Sorry to have tormented you with what could have been! Yes, the champagne sangria was perhaps the best discovery of the trip.

Champagne sangria?!?! My life has changed.

I am not sure when, but i foresee traveling to Puerto Rico one of these years....and when I do I will definitely check this place out. What an awesome new years for you ladies!

You must! A four hour direct flight and within 15 minutes you're on the beach. El Picoteo is a must!

Thanks for an interesting blog. What else may I get that sort of info written in such a perfect approach? I have an undertaking that I am just now operating on, and I have been on the lookout for such info. daftar poker88

This blog is really great. The information here will surely be of some help to me. Thanks!. daftar poker88

nice bLog! its interesting. thank you for sharing.... poker88

Remarkable article, it is particularly useful! I quietly began in this, and I'm becoming more acquainted with it better! Delights, keep doing more and extra impressive! dewapoker

I'm glad I found this web site, I couldn't find any knowledge on this matter prior to.Also operate a site and if you are ever interested in doing some visitor writing for me if possible feel free to let me know, im always look for people to check out my web site. online keno

i love reading this article so beautiful!!great job! qqslot

Glad to be one of several visitants on this amazing web site : D. rulett online

Thanks for the blog filled with so many information. Stopping by your blog helped me to get what I was looking for. Now my task has become as easy as ABC. poker88

This is a truly good site post. Not too many people would actually, the way you just did. I am really impressed that there is so much information about this subject that have been uncovered and you’ve done your best, with so much class. If wanted to know more about green smoke reviews, than by all means come in and check our stuff. SAFE GAY PLACES

Well we really like to visit this site, many useful information we can get here. coffee beans online

Admiring the time and effort you put into your blog and detailed information you offer!.. puzzle games

Great post! I am actually getting ready to across this information, is very helpful my friend. Also great blog here with all of the valuable information you have. Keep up the good work you are doing here. How to tech magazine

This is my first visit to your web journal! We are a group of volunteers and new activities in the same specialty. Website gave us helpful data to work. buy league of legends account

I’m going to read this. I’ll be sure to come back. thanks for sharing. and also This article gives the light in which we can observe the reality. this is very nice one and gives indepth information. thanks for this nice article... 먹튀검증커뮤니티

Pretty good post. I just stumbled upon your blog and wanted to say that I have really enjoyed reading your blog posts. Any way I'll be subscribing to your feed and I hope you post again soon. Big thanks for the useful info. 먹튀검증

The best article I came across a number of years, write something about it on this page. mx graphics

The website is looking bit flashy and it catches the visitors eyes. Design is pretty simple and a good user friendly interface. 토토사이트

Thanks for the blog post buddy! Keep them coming... Chillwell portable ac review

Wow, What a Excellent post. I really found this to much informatics. It is what i was searching for.I would like to suggest you that please keep sharing such type of info.Thanks talk to strangers video call

I think this is an informative post and it is very useful and knowledgeable. therefore, I would like to thank you for the efforts you have made in writing this article. how to track a phone

I admire what you have done here. I like the part where you say you are doing this to give back but I would assume by all the comments that this is working for you as well. tavor 7 for sale

Wow, cool post. I'd like to write like this too - taking time and real hard work to make a great article... but I put things off too much and never seem to get started. Thanks though. prima weight loss

Wow, cool post. I'd like to write like this too - taking time and real hard work to make a great article... but I put things off too much and never seem to get started. Thanks though. สล็อต888เว็บตรง

This is such a great resource that you are providing and you give it away for free. I love seeing blog that understand the value of providing a quality resource for free. Chillwell AC

Hi my loved one! I wish to say that this post is amazing, great written and come with almost all important infos. I would like to see more posts like this . live resin for sale

I wanted to thank you for this great read!! I definitely enjoying every little bit of it I have you bookmarked to check out new stuff you post. accounting for financial modeling

Thanks for sharing the post.. parents are worlds best person in each lives of individual..they need or must succeed to sustain needs of the family. estudent

These websites are really needed, you can learn a lot. 토토사이트

I have a similar interest this is my page read everything carefully and let me know what you think. もっと見る

On Friday, April 28 Amazon released season three of the romantic comedy Catastrophe. I flew through season one and season two in August of last year, clamoring for more episodes.