Those who read the blog regularly know that the thing I was most excited about when I moved to Watertown was having the chance to uncover new dining gems. Right after Christmas I went with a friend to try and have dinner at Gustazo, a Cuban restaurant on Belmont Street. There was a sign on the door saying they were closed for vacation and we wound up at Moozy's.

Last week we revisited and were thrilled to see the red illuminated sign flashing "Open." 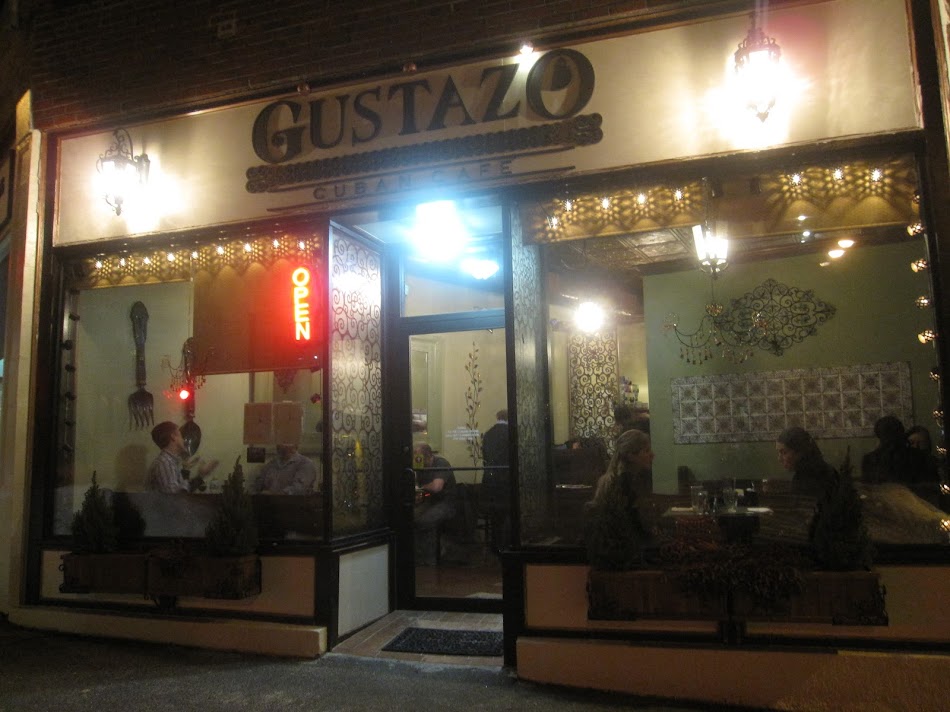 The decor in Gustazo is simple and is meant to evoke Havana, Cuba. 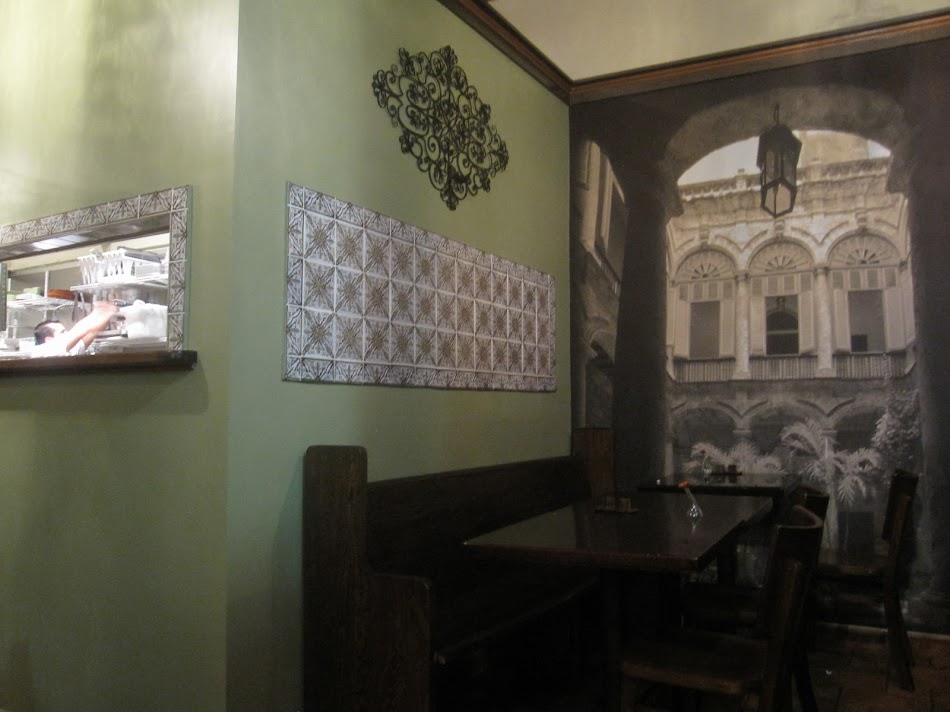 How do I know they want it to feel like Havana? Well, at the top of the wall, where the wall meets the ceiling, they've hung a street sign that says so. 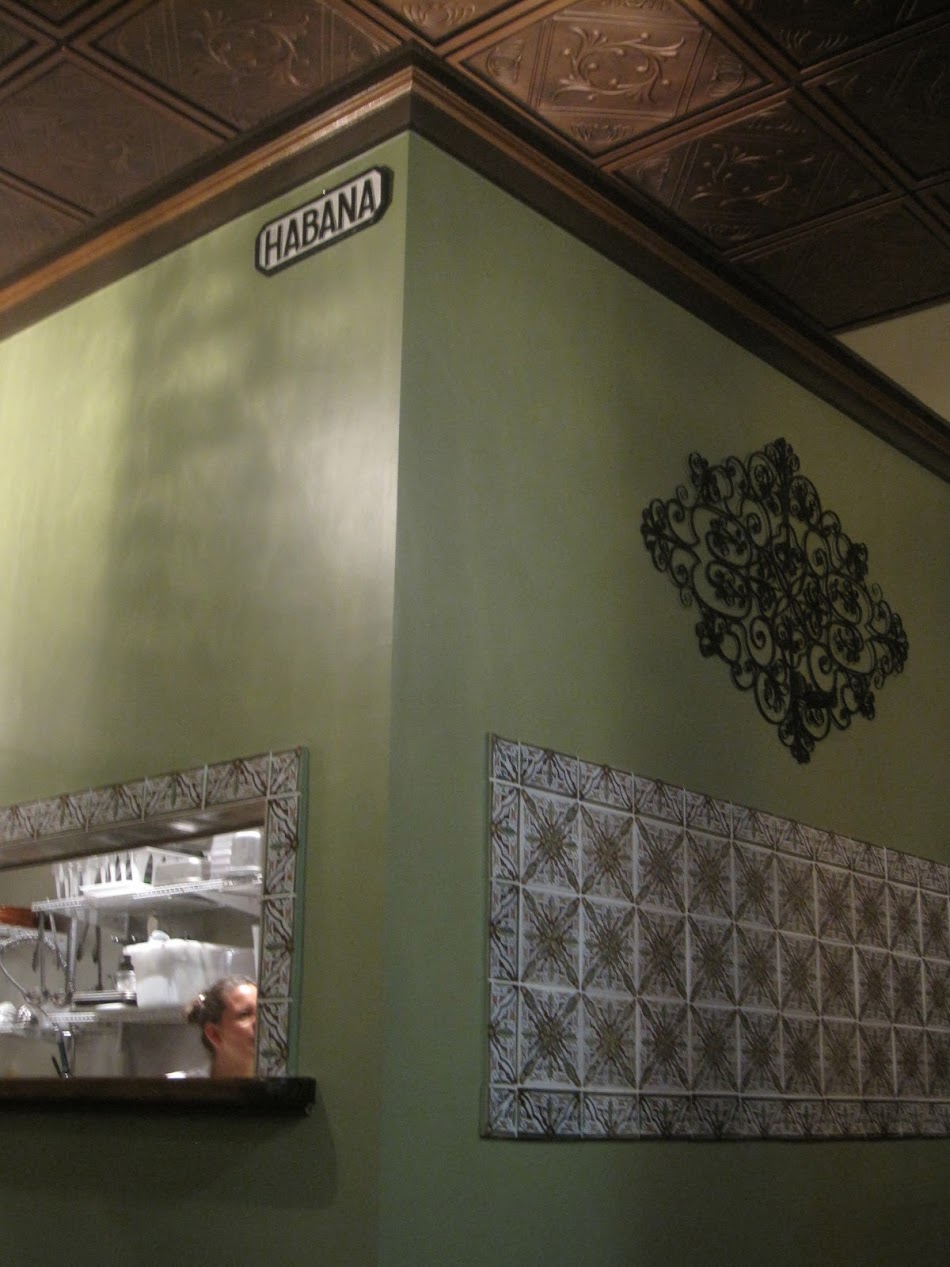 The restaurant space is very narrow with just a few tables in the front windows and along the left wall. I have to say, they really did a lot with very little square footage. 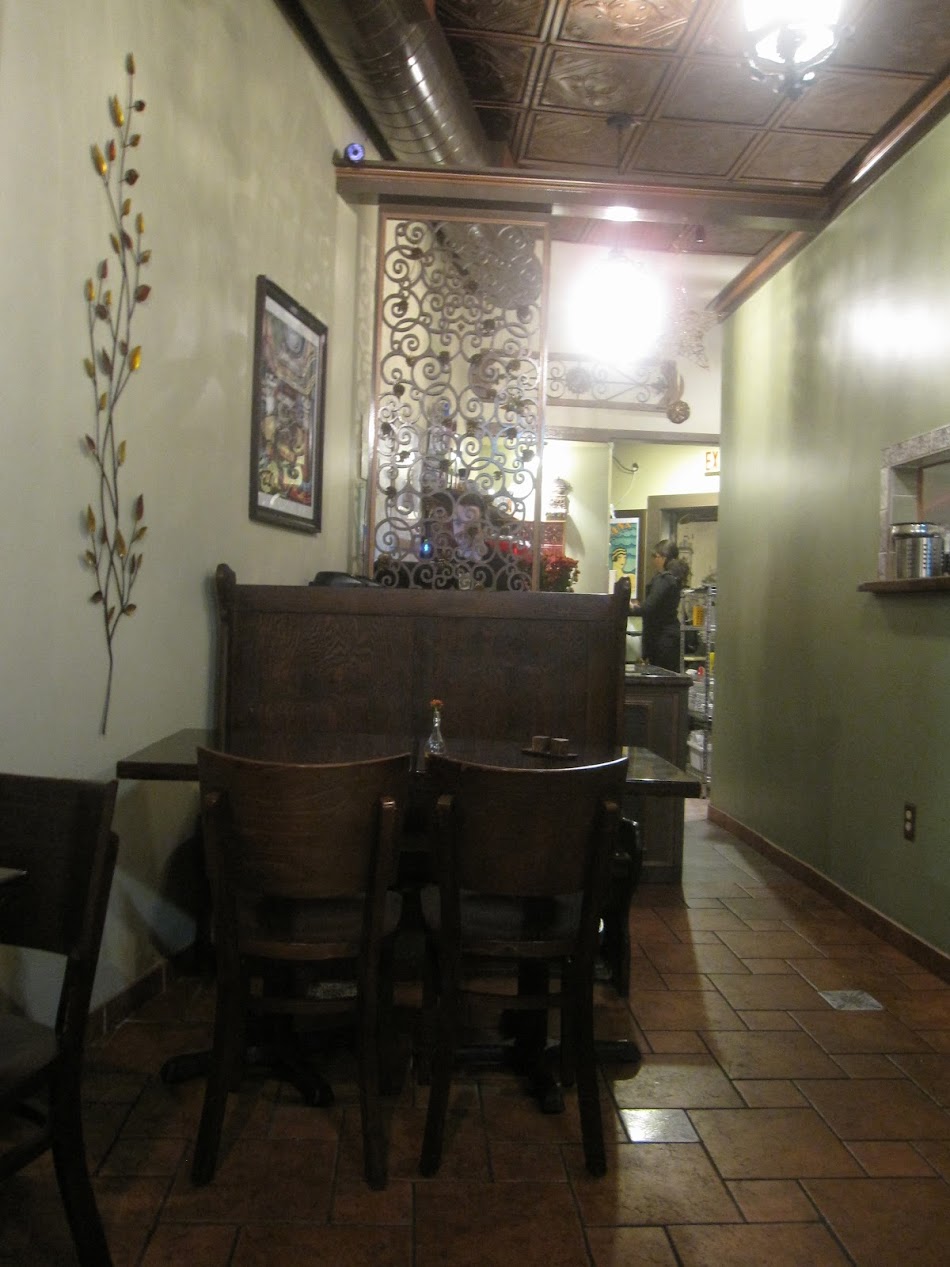 We were seated in the very first table, next to the front door. I kept my coat on because the door kept opening and letting in freezing cold air.

I loved the giant fork and spoon mounted on the wall next to our table. 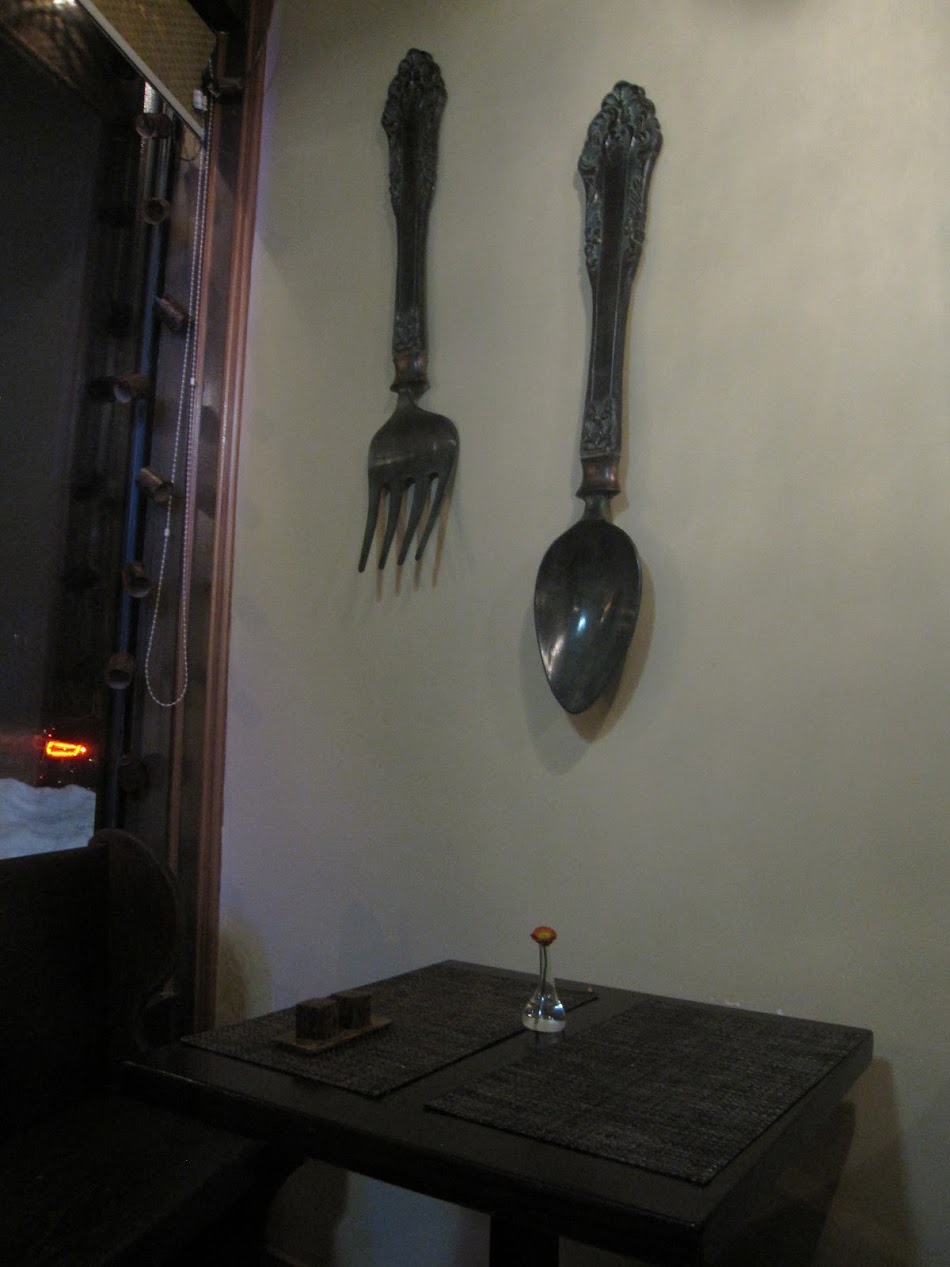 The first thing I noticed once we got settled was the salt and pepper shakers. I have never seen a set like this before. 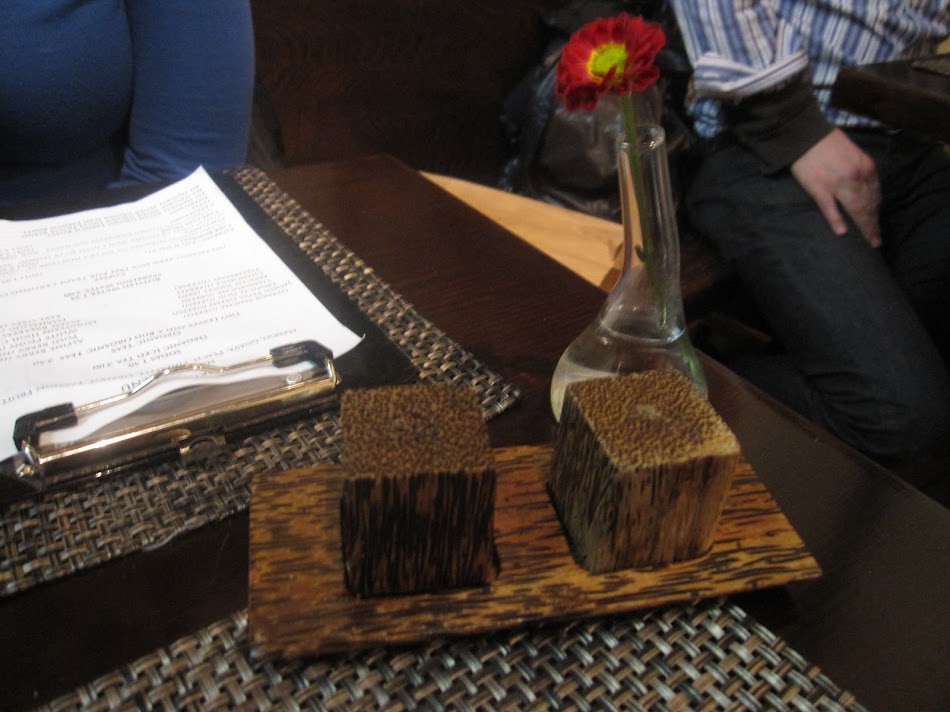 The table setting was accented with one bright red flower.

The Gustazo menu makes finding vegetarian choices super easy by marking each veg-friendly dish with a green leaf. I was happy we looked up the menu online before we left the house because we noticed Gustazo is BYOB (see bottom right corner of the menu). 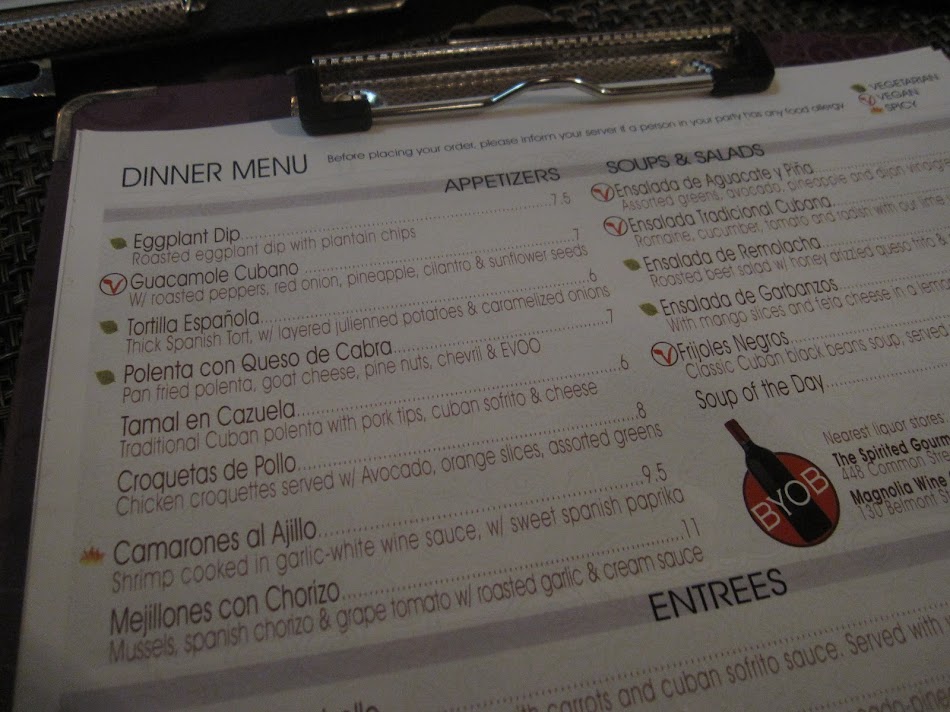 I've never brought my own wine to dinner before, but there is a first time for everything. We brought a bottle of white and to our surprise and delight, there was no corking fee!

It took us quite a while to decide what to order. Partially because there were so many good choices and we were trying to decide how many dishes we could split, and partially because our waiter was nowhere to be seen. All night he kept disappearing for very long periods of time.

Our first dish, which we shared as an appetizer, was the ensalada de garbanzos (chickpea salad). The salad is a pile of chickpeas tossed with feta cheese, mango and lemon-cumin sauce served over bright red, fresh tomatoes. 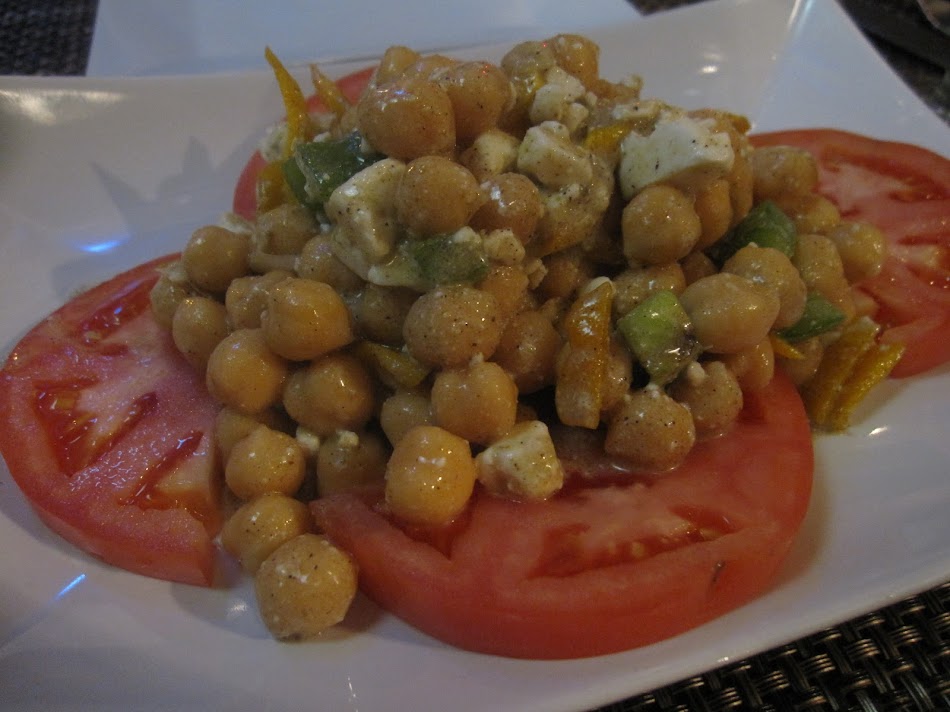 The salad was overdressed, which really ruined the dish. The mango in the salad didn't taste fresh at all and I thought the only good bites were ones that had a piece of those fresh tomatoes.

Next we shared the house made guacamole with plantain chips. I love that they used plantains instead of yellow or blue corn chips! 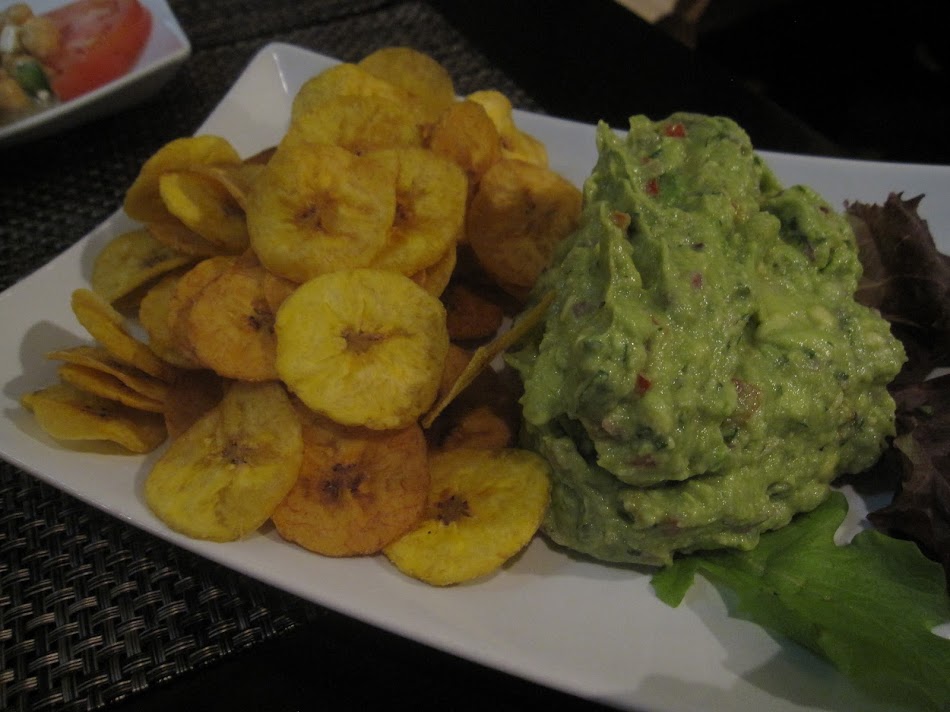 The guacamole was fantastic and definitely had a heap of fresh garlic.

My dinner date ordered the tamal en cazuela (cazuela simply refers to the type of bowl it is cooked and served in). The clay pot was packed with polenta, pork tips, Cuban sofrito and cheese. 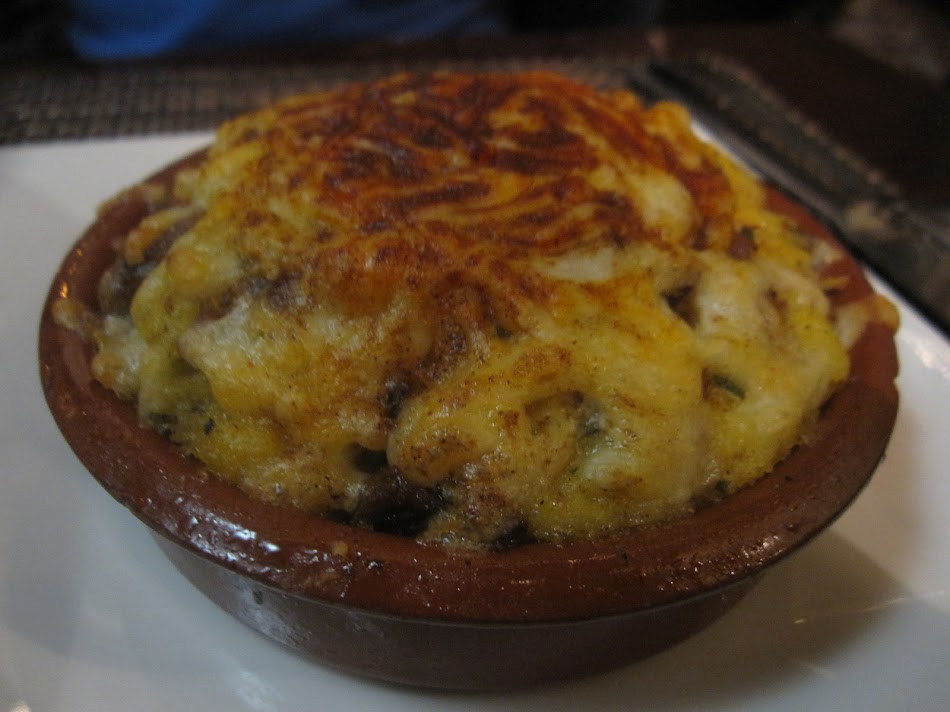 She said, "The polenta was great, but I really would have liked more pork. That being said, this was the perfect portion size after those two big appetizers."

I went with the aji relleno (stuffed pepper) which was overflowing with eggplant and cheese and surrounded by a moat of carrots, mushrooms, spinach and pine nuts. 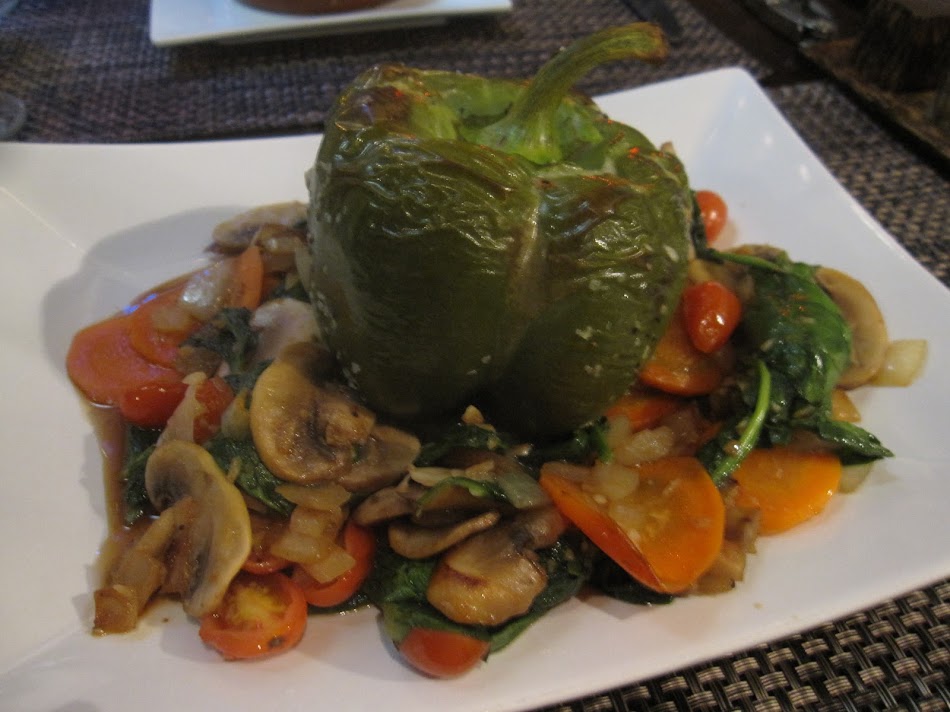 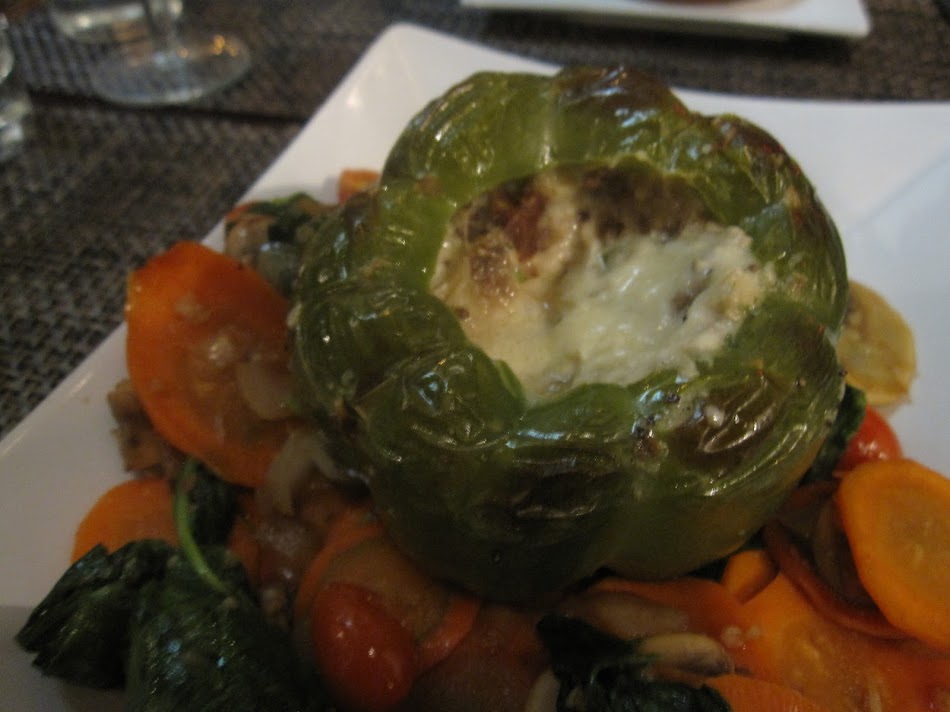 This plate was big enough to feed three people! I loved that in addition to the pepper, you also got so many fresh veggies. The stuffing for this pepper was so creamy and had just the right amount of eggplant.

Though we were very full and tired of waiting around for our waiter, we were interested in seeing the dessert menu. There are four dessert choices, including the traditional flan, but we selected the gluttonous crepe. 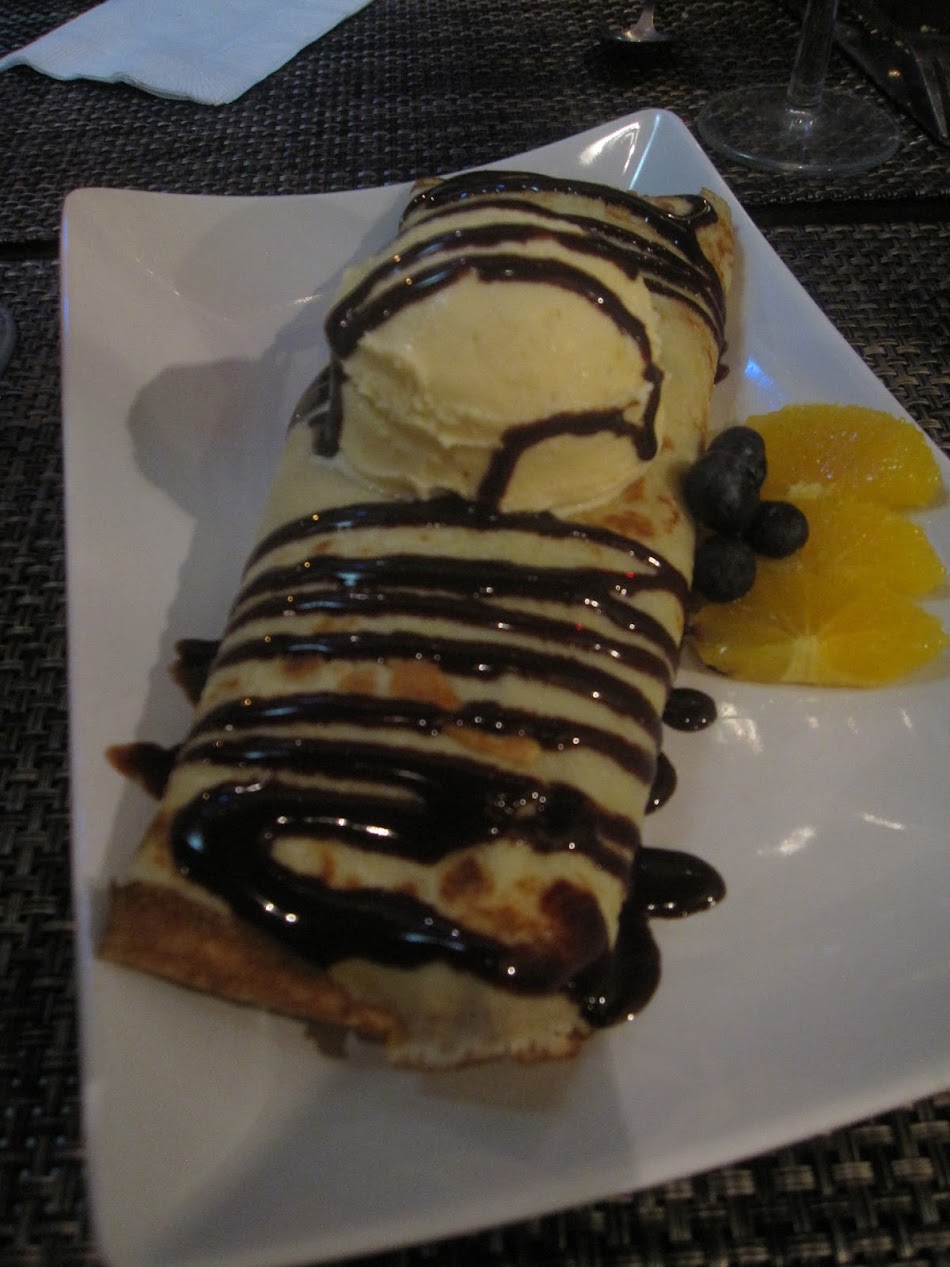 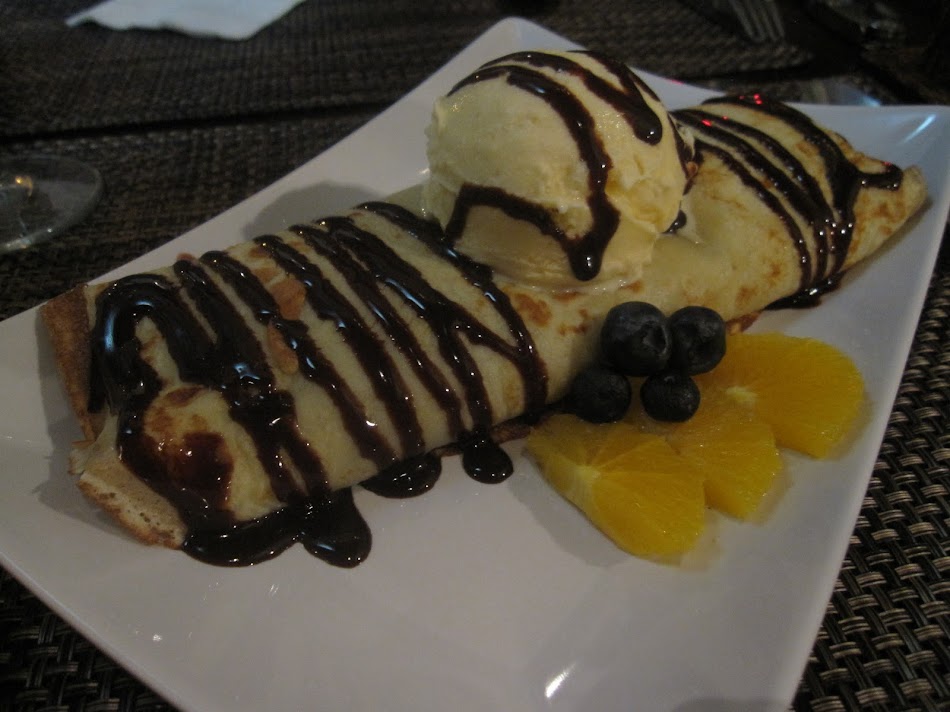 The crepe is filled with chocolate mousse, topped with vanilla ice cream and then garnished with chocolate sauce. As you can see, Gustazo throws some orange slices and blueberries on the side, but let's be honest, who is going to touch that?

The mousse inside the crepe was very cold, but tasted light. The ice cream was rich and had that classic, creamy flavor you can also really taste with vanilla.

Overall, I really enjoyed the food at Gustazo. The guacamole and plantain chips were awesome, the stuffed pepper was an outrageously huge portion and so delicious and that chocolate mousse crepe was sinfully good. However, the service was lackluster, bordering on negligent. Our waiter completely forgot to bring my date the side of plantains she requested and was repeatedly impossible to find.

Also, There was no rhyme or reason to order in which food came out of the kitchen. Watching people eat who came in 30 minutes after us was quite frustrating. Gustazo doesn't do any type of complimentary starter like bread or chips, making the amount of time you've been waiting painfully apparent.

Lastly, the couple sitting next to us were talking very loudly and remained seated over a half hour after they paid their bill. While I respect letting people hang out and not rushing your best customers, these two were absolutely disturbing everyone around them.

I wanted to love Gustazo, but the terrible service overshadowed everything else. 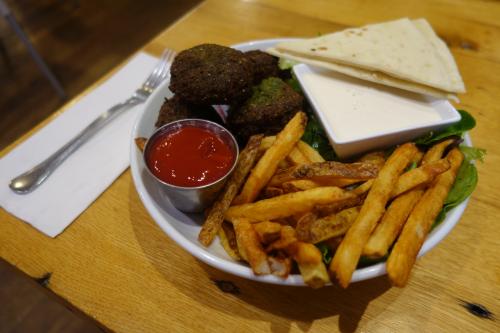 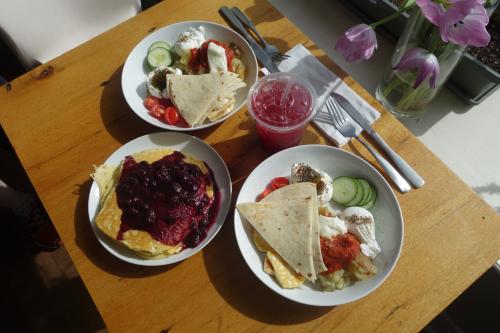