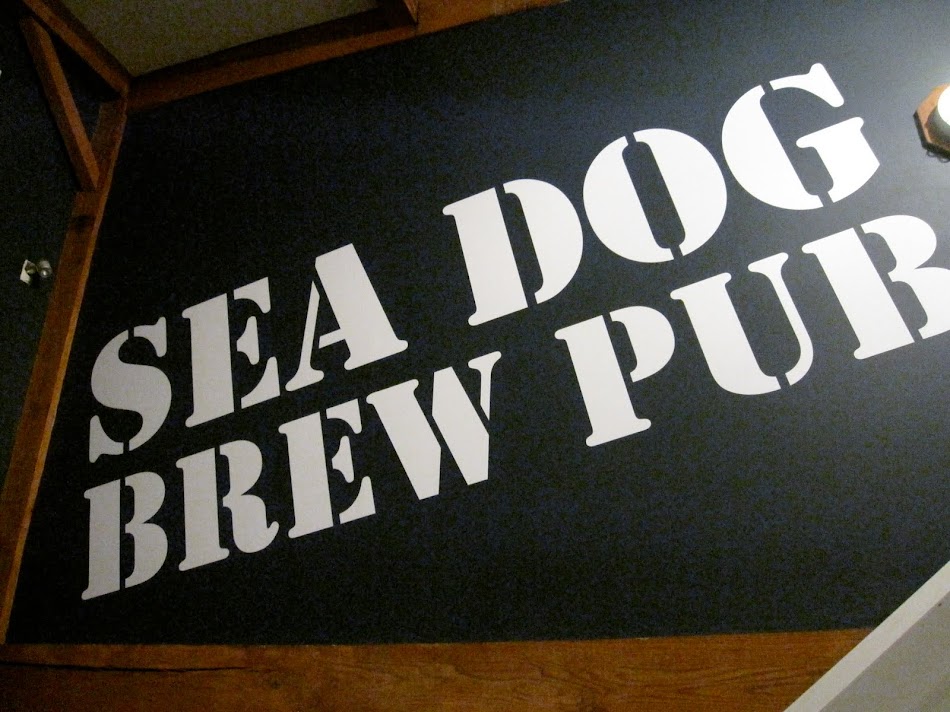 While on vacation this week on Nantasket beach (where my father grew up) my family and I decided to try Hull, MA's newest addition, the Sea Dog Brew Pub. I first heard about the Sea Dog Brew Pub via the website Thrillist and soon after via a Twitter friend, Hidden Boston. The restaurant is part of the Sea Dog Brewing Company family, which is based in Maine.

The Hull location is right on the A Street pier with a fantastic view of the water. We arrived right at sunset: 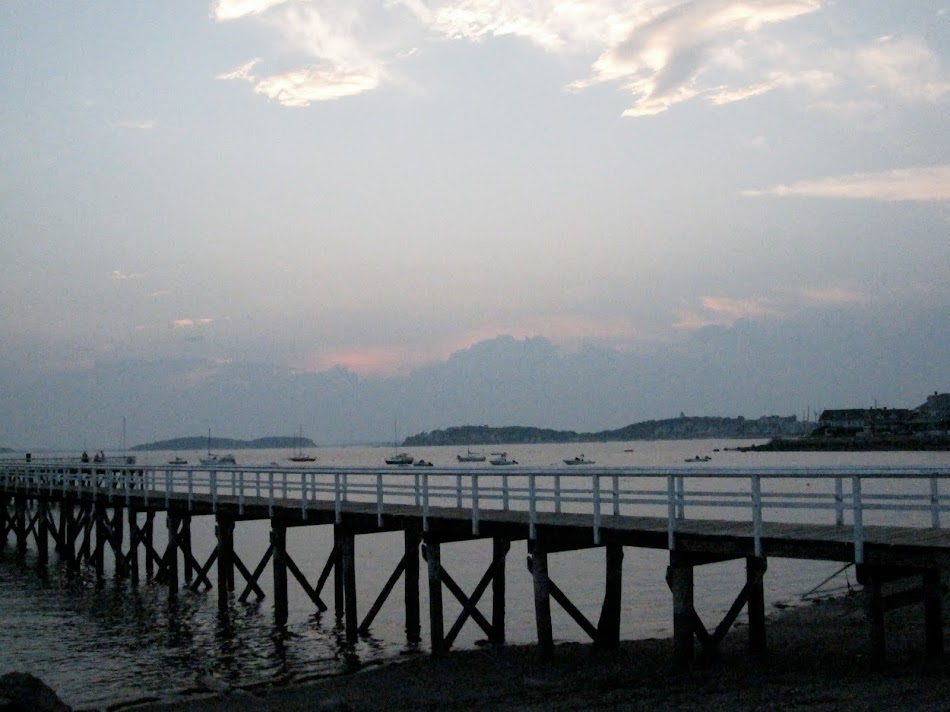 When you walk up the stairs to the Brew Pub you are greeted by this massive, adorable picture of the Sea Dog: 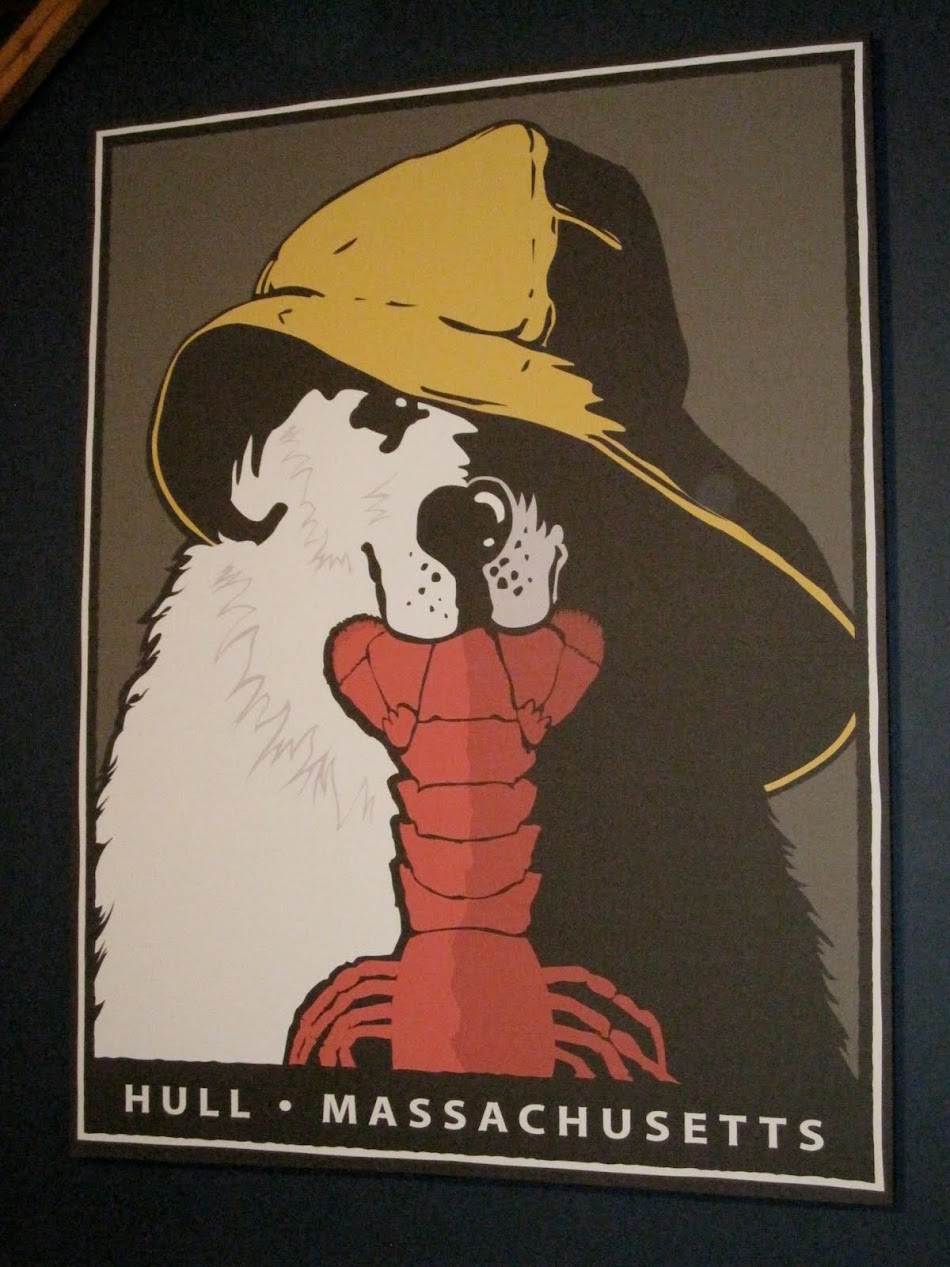 The restaurant itself feels very open with windows on every wall, a large bar in the center and tables scattered around the bar. There is also counter seating along the windows. While we didn't sit on the outdoor deck, that is the prime spot in this location. 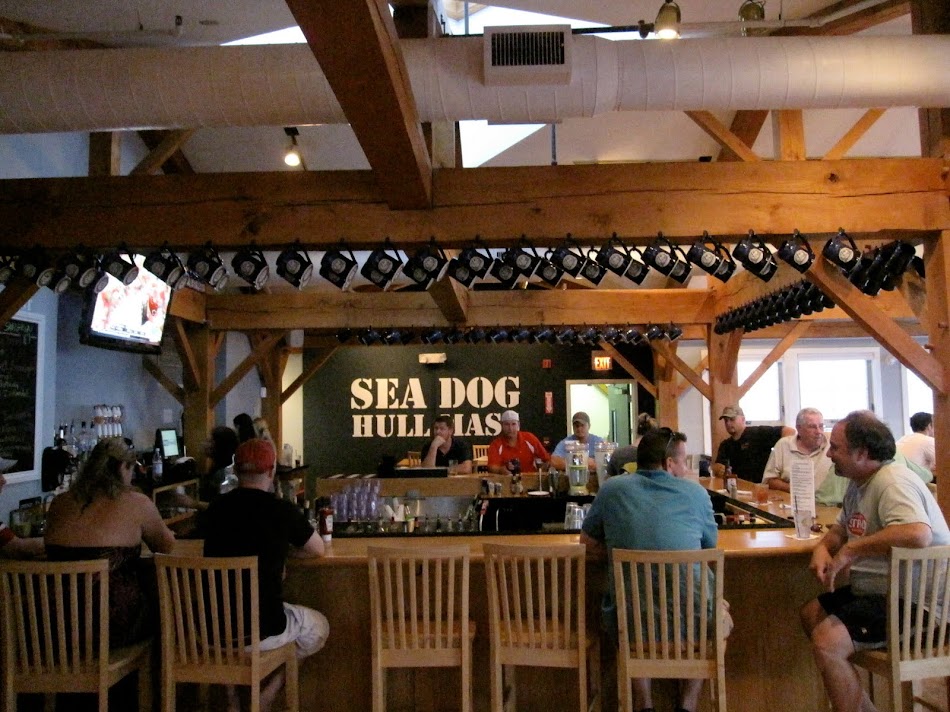 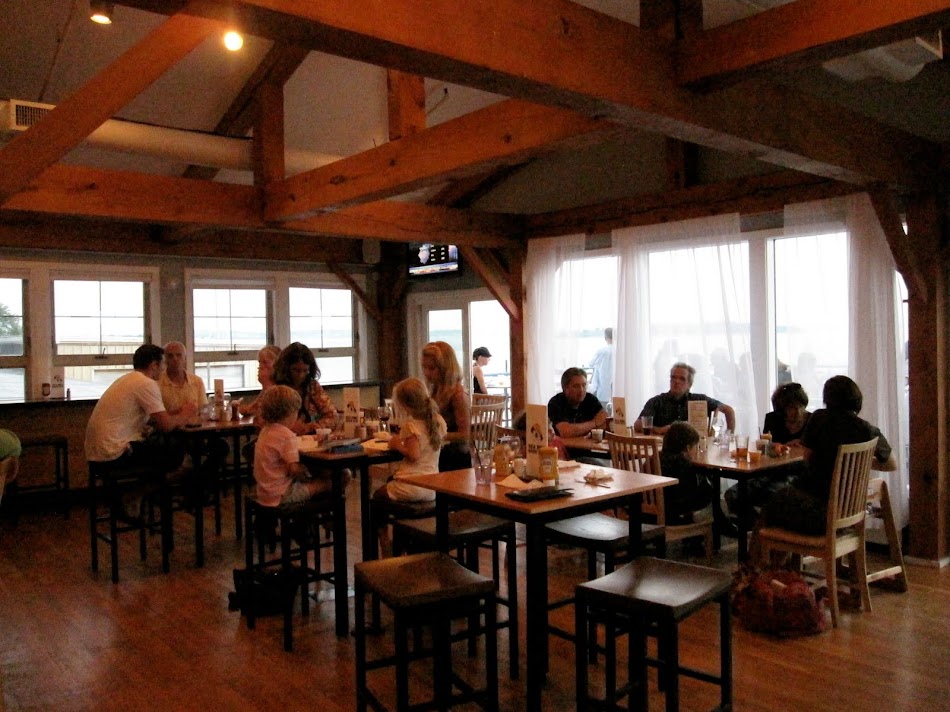 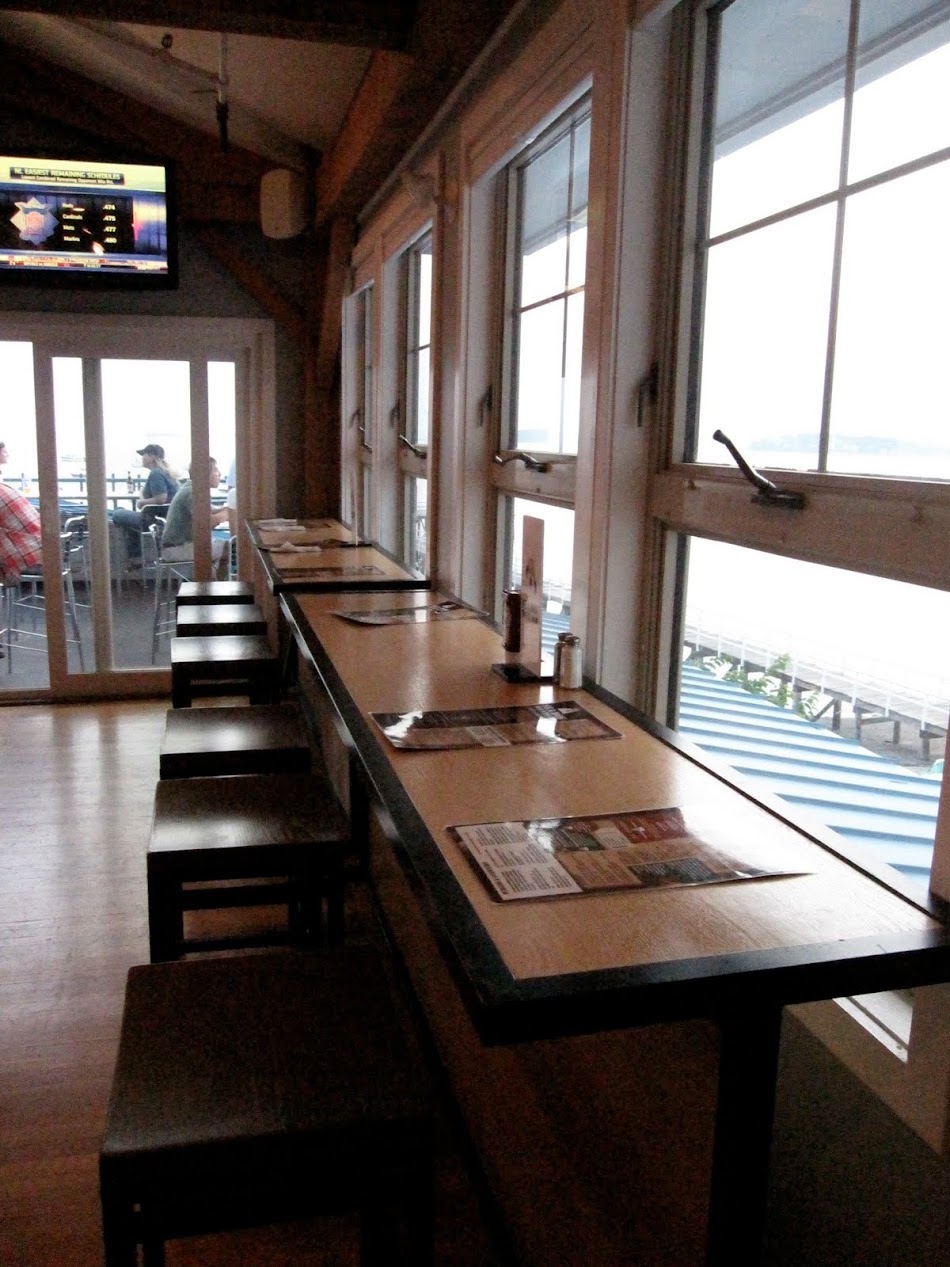 The menu is typical bar food with an emphasis on seafood and fried goodies. The beer menu offers all the Sea Dog favorites. I ordered the blueberry wheat, which came with fresh blueberries floating in the glass. 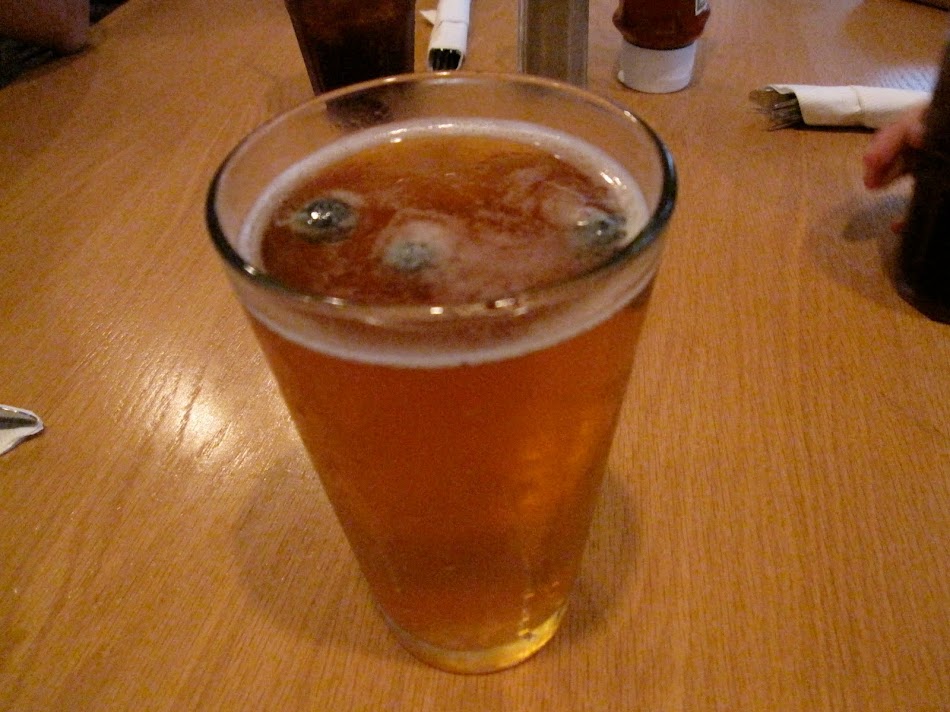 For an appetizer we tried the oven roasted nachos which were a generous portion topped with fresh veggies and extra jalapeños. Heaping bowls of salsa and guacamole came on the side. I highly recommend this as a starter. It was a huge crowd pleaser. 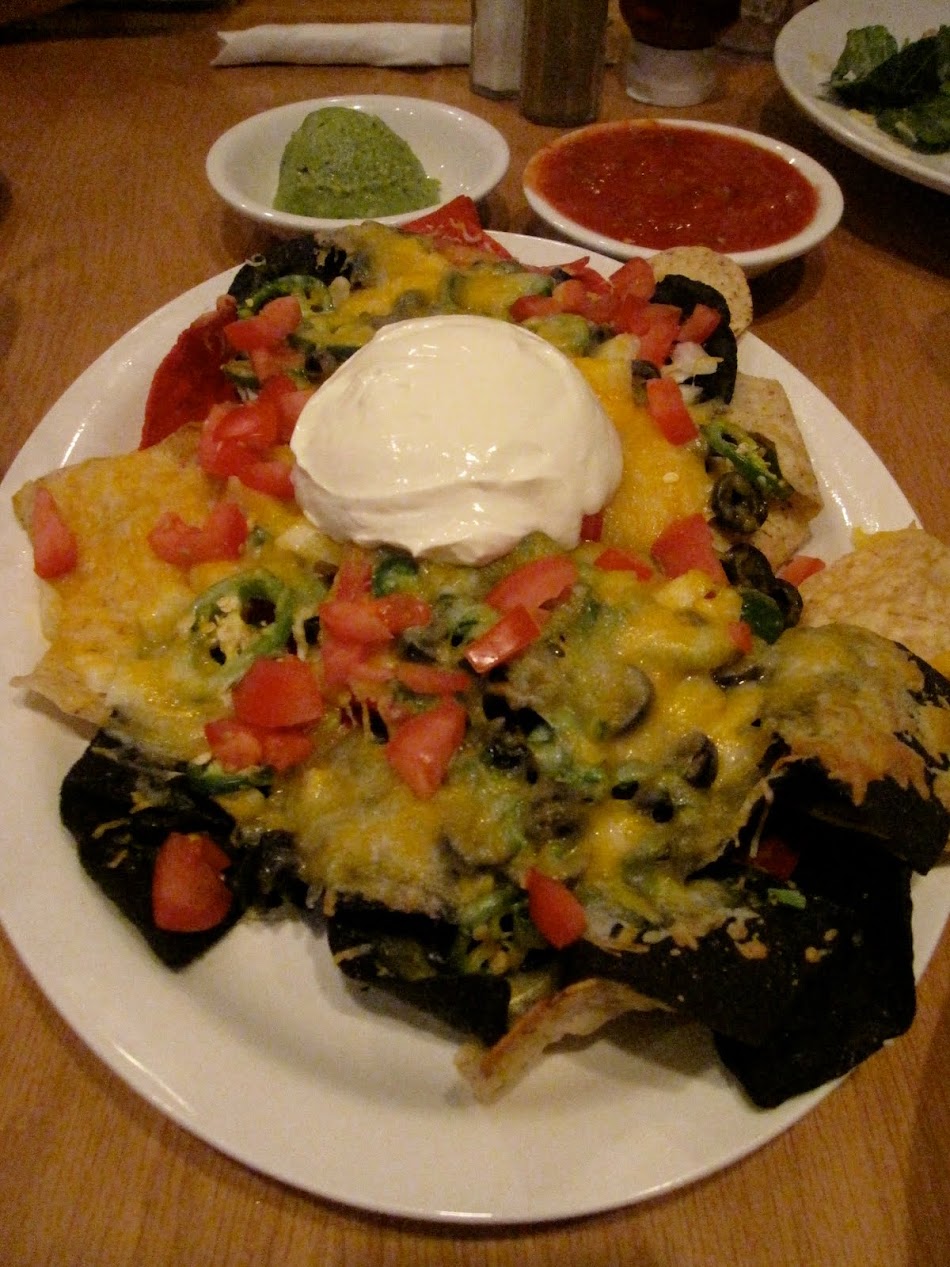 I planned to order a veggie burger for dinner but the young, inexperienced waitress told me they were out of veggie burgers (have you heard of the grocery store?). I asked what she would suggest I order instead and she sheepishly answered, "Um, salad?" So I did order the house salad.

Those of us who ordered salad for dinner found our meals arriving as appetizers instead of entrees. Not cool. When the rest of the meals arrived we finally dug in. 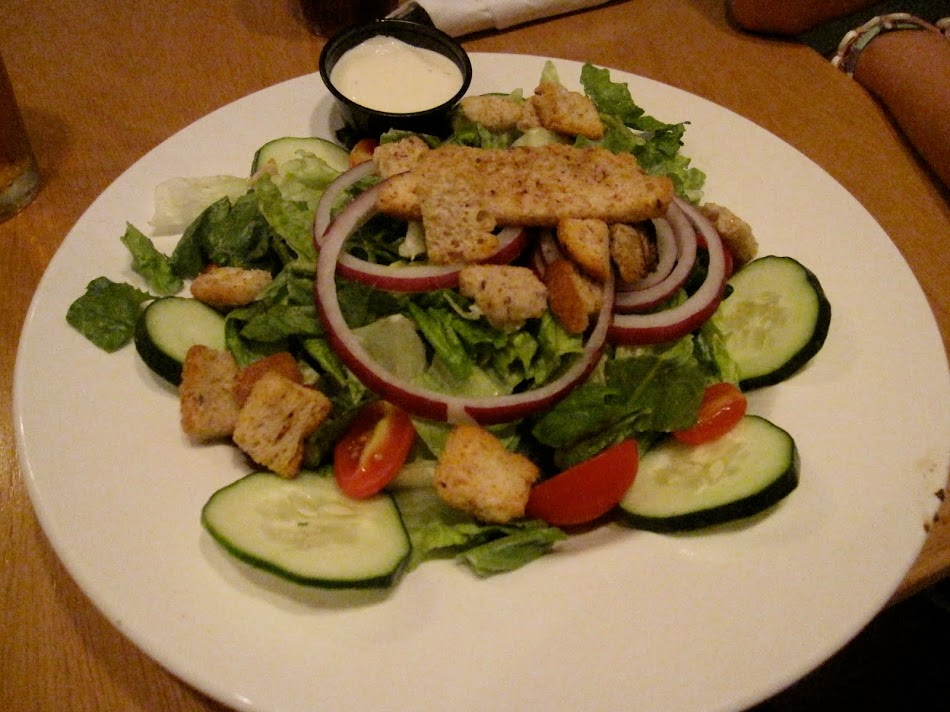 One of my cousins tried the cheeseburger and she said it was in her Top 5 of all time! The french fries on the side were golden, delicious and perfectly crispy. 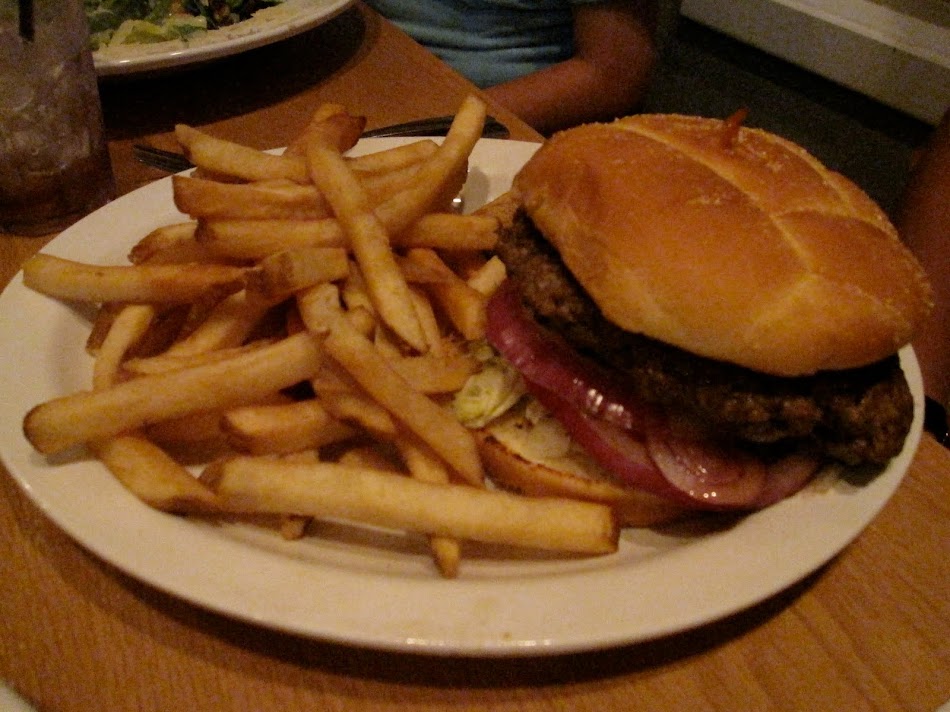 Another family member tried the grilled chicken sandwich which was topped with cheddar and bacon. 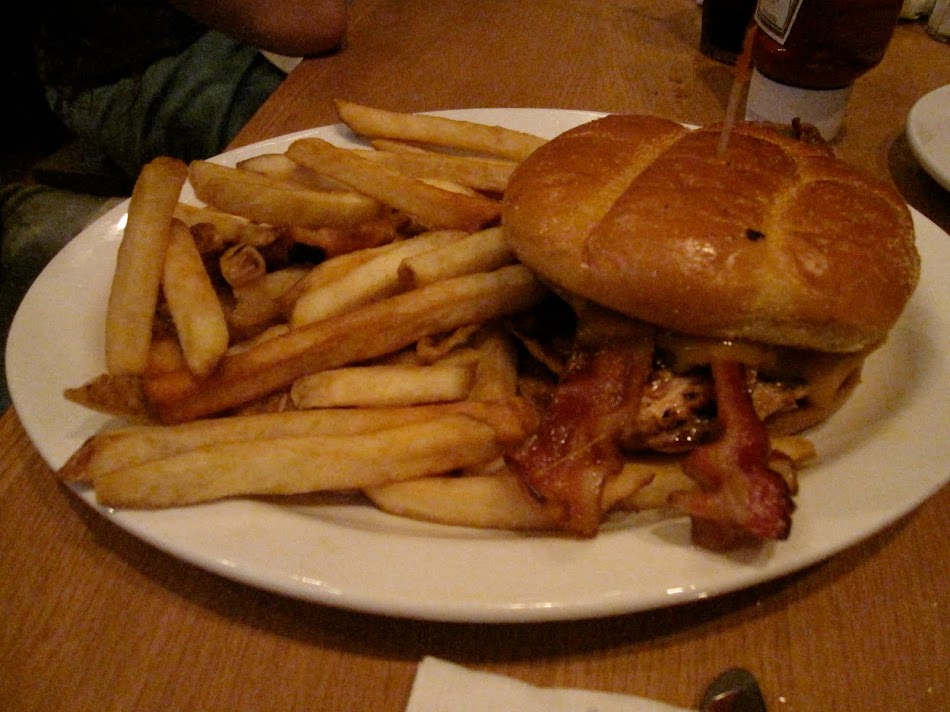 Down the table the onion rings looked fantastic as did the fish and chips.

While the service at the Sea Dog was sub-par, the location can't be beat and the bar food is quite tasty. Having the Sea Dog brews available on tap in the sleepy beach town of Hull is definite a plus.

The Sea Dog Brew Pub is great for watching a game, having drinks while the sun sets or for a big family dinner. If you buy a mug, appetizers are half price on Monday! 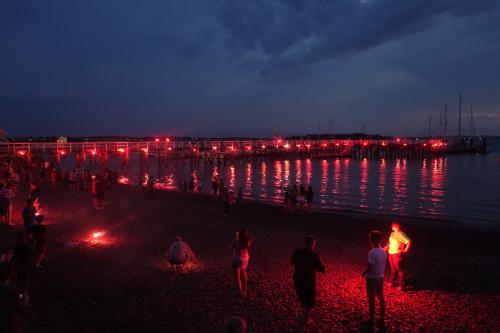 Each year the Hull Lifesaving Museum in Hull, MA hosts an annual event called the Hull Harbor Illumination. It's absolutely gorgeous and free to attend. 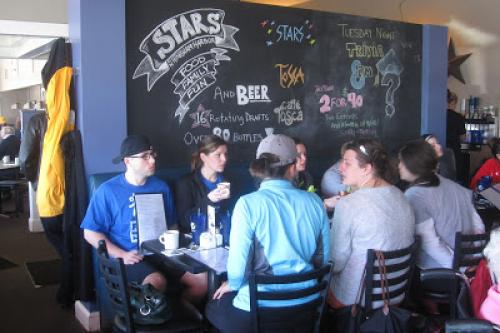 Dining Out: Stars On Hingham Harbor

This past weekend I woke up on Saturday morning and drove to the South Shore to Hingham, MA. My friend was celebrating her 28th birthday and signed up for a 5K in Hingham to kick off her special day. Post-race we dined at Stars on Hingham Harbor. It was an absolutely gorgeous day, the first nice day in Massachusetts in 2013. When we pulled up to Stars it felt like summer. 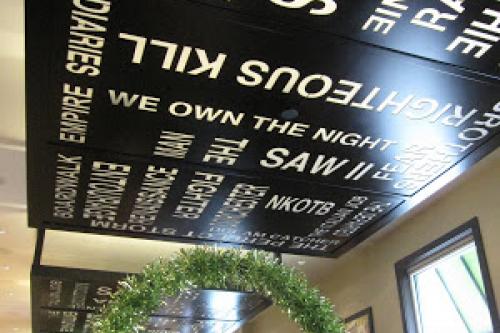 A few months ago it seemed the whole Boston universe was a buzz with the news that Donnie and Marky Mark's brother, Paul, was going to open his second restaurant in the Hingham Shipyard, a burger joint called Wahlburgers. I totally bought into the hype and could not wait to make the trip down 93 to experience Wahlburgers for myself. One week went by, then two, then three and eventually I found myself months out from the opening without an adventure planned.