On Sunday there is only one thing that matters - brunch.

For the past week or so I've been sharing with you some of the discoveries made during my reunion weekend with my college girls (Crompton Collective, Tavolino). Our final group outing was to a place in Worcester, MA called Armsby Abbey. 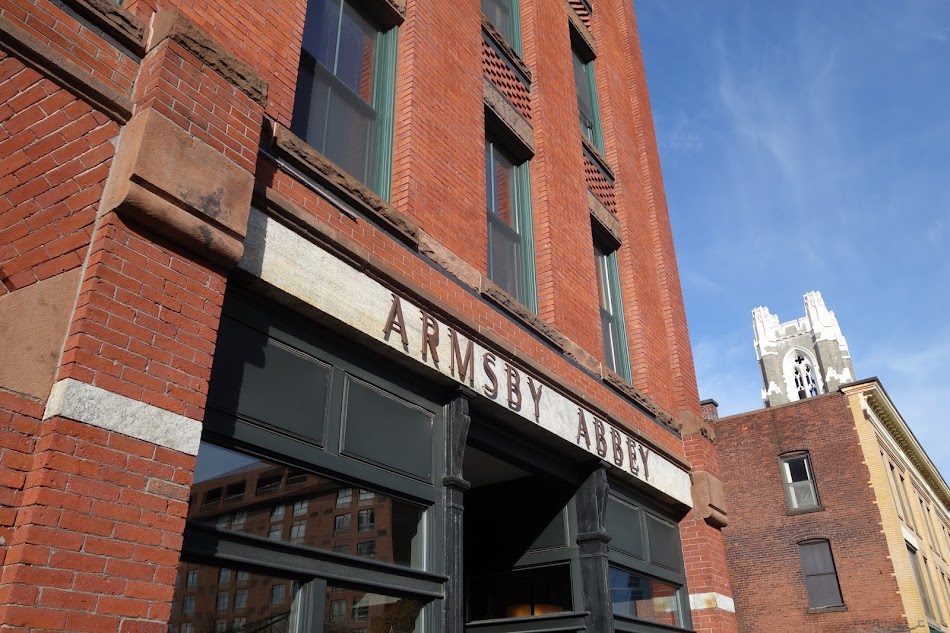 Armsby Abbey opens for Sunday brunch at 10:00am. Knowing the place fills up quickly, we arrived at 9:45am to start standing in line. There were about 15 other people with the same idea.

When the clock struck ten, all the eager beavers began pushing through the front door. As soon as we set foot inside I noticed the gorgeous exposed brick walls. 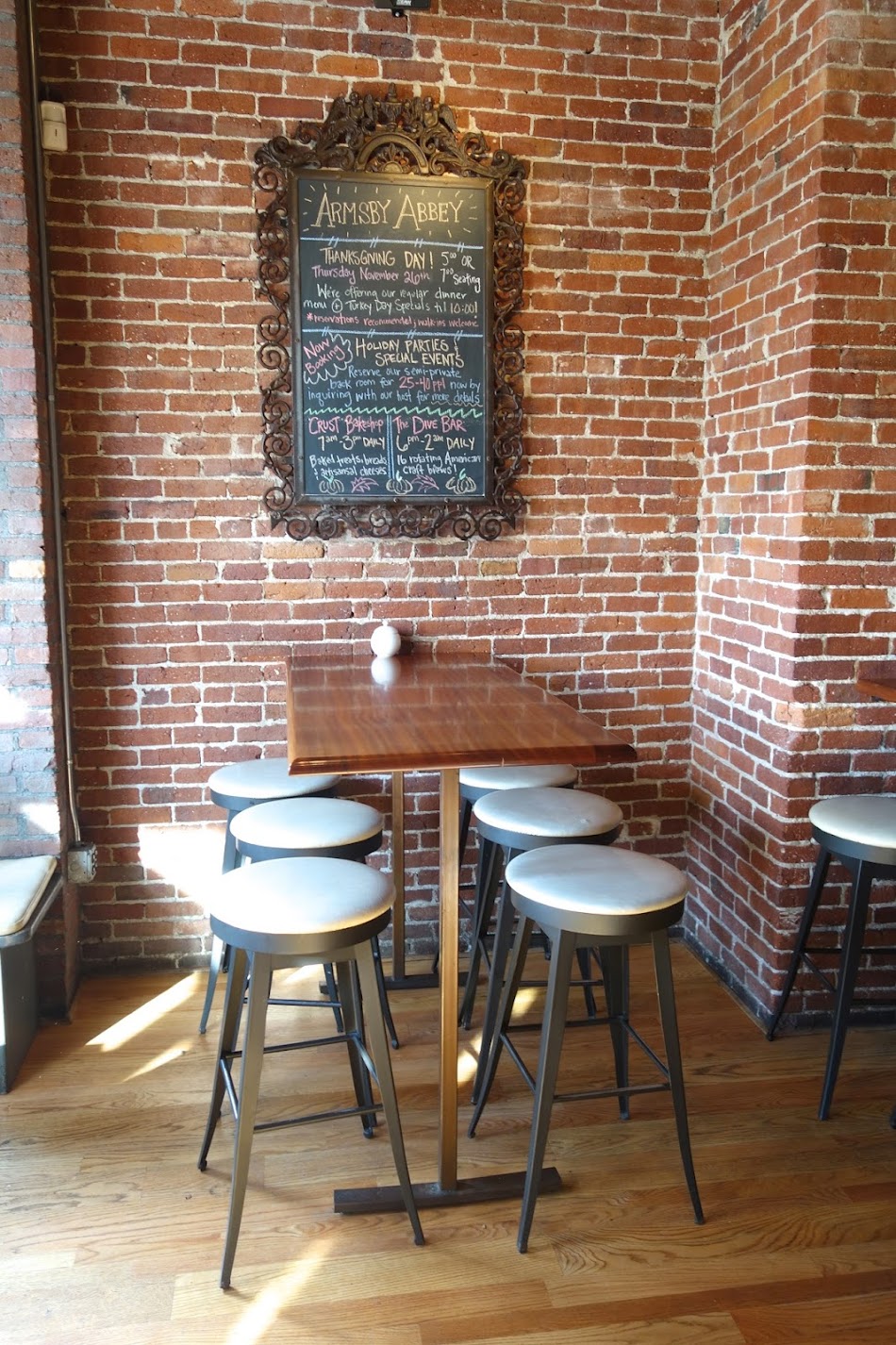 We walked through the bar area and were seated in the very back of the restaurant at a high top booth.

Our waitress came over to deliver us menus and talk through some of the brunch cocktail options. Armsby Abbey changes their menu constantly based on what is fresh and in season, so they print new menus every weekend. 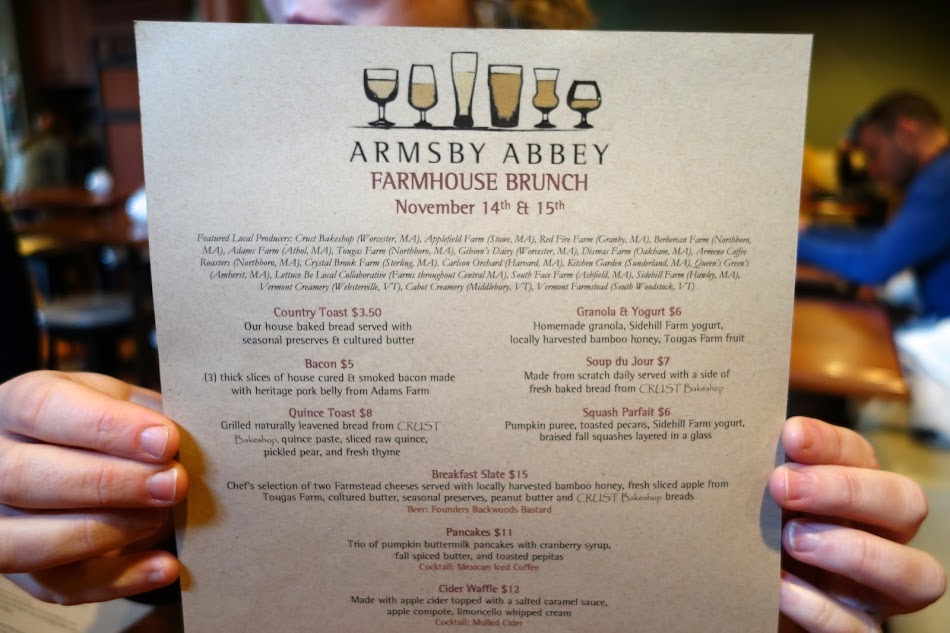 Of course my eyes were immediately drawn to the Bloody Mary section. Armsby Abbey lets you design your own Bloody. You can select everything from the spice level of the mix to the type of alcohol to the variety of garnishes. 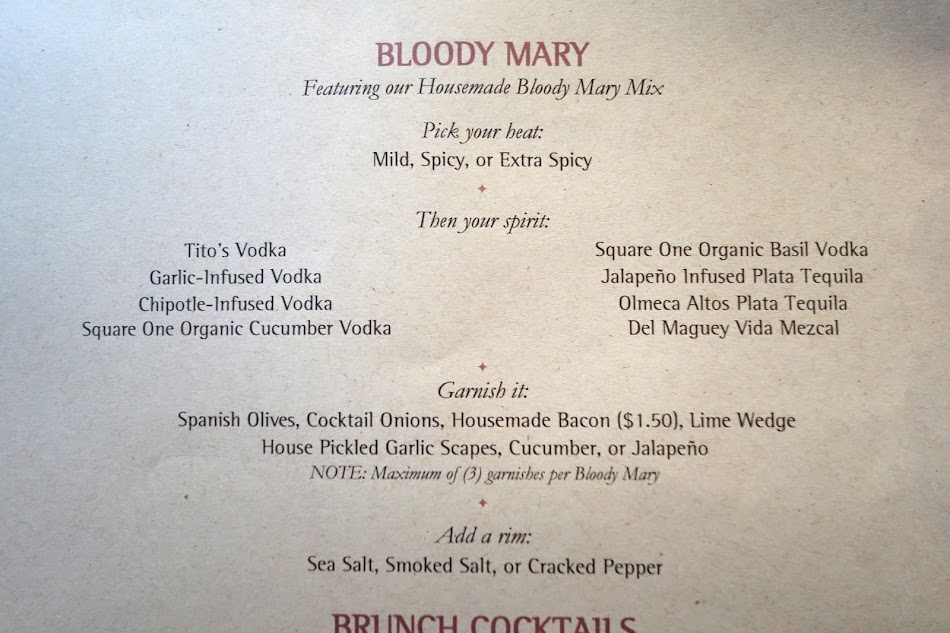 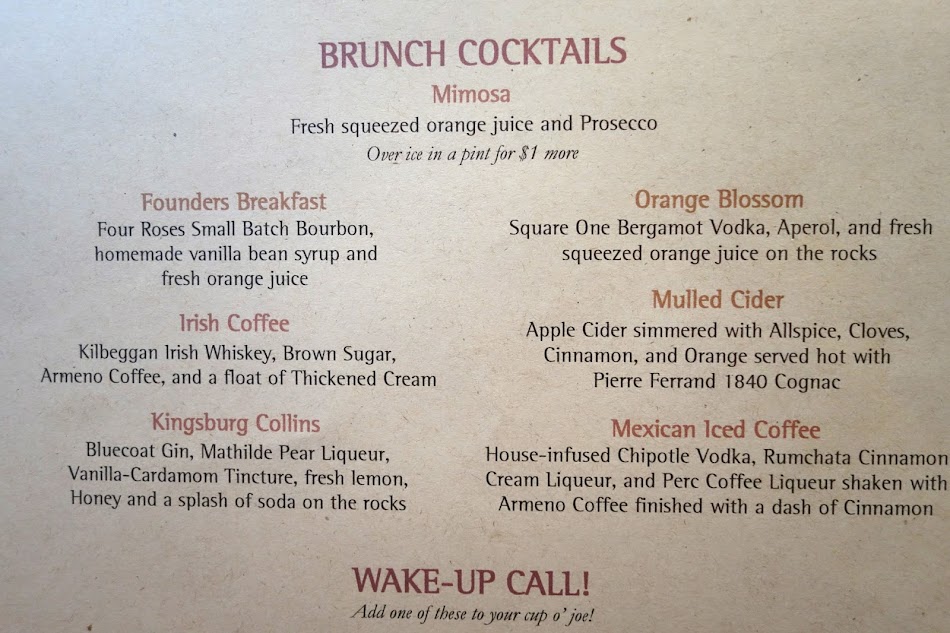 The most hilarious boozy option is the "wake-up call!" which lets you add a shot to your morning coffee. 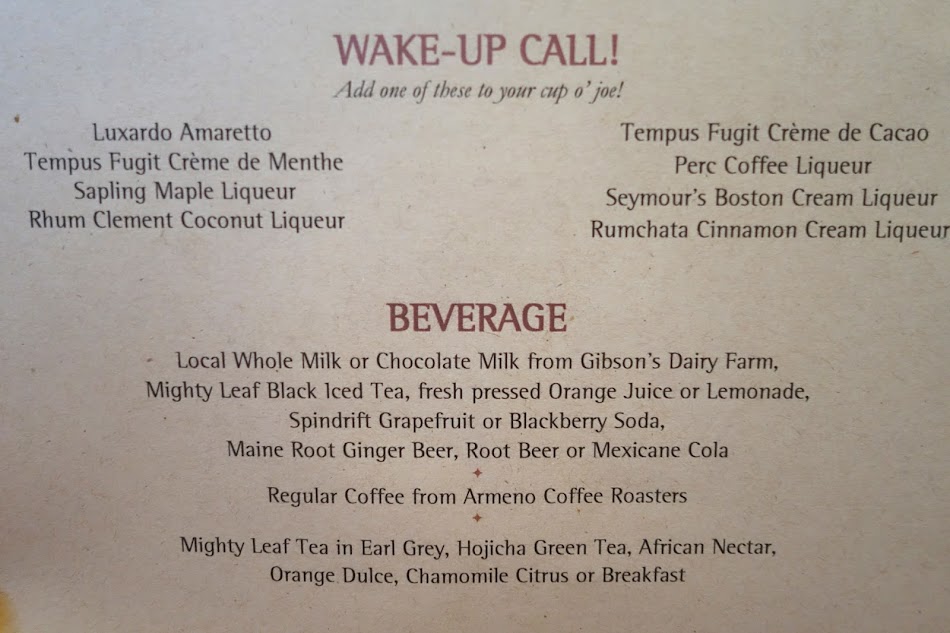 To warm up from the icy cold temperatures outside, one of our friends ordered a cup of tea, which came with the cutest little pot of honey. 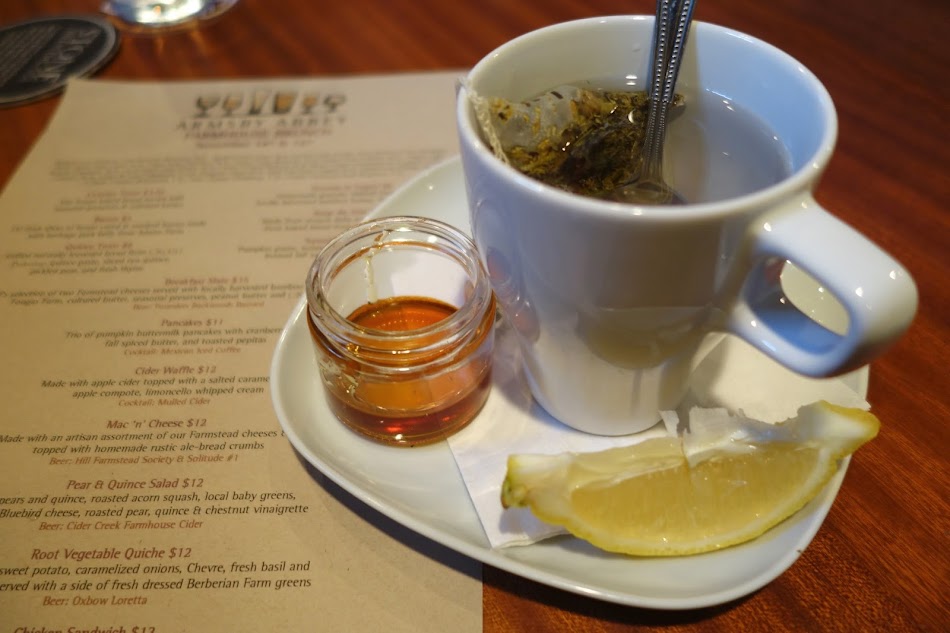 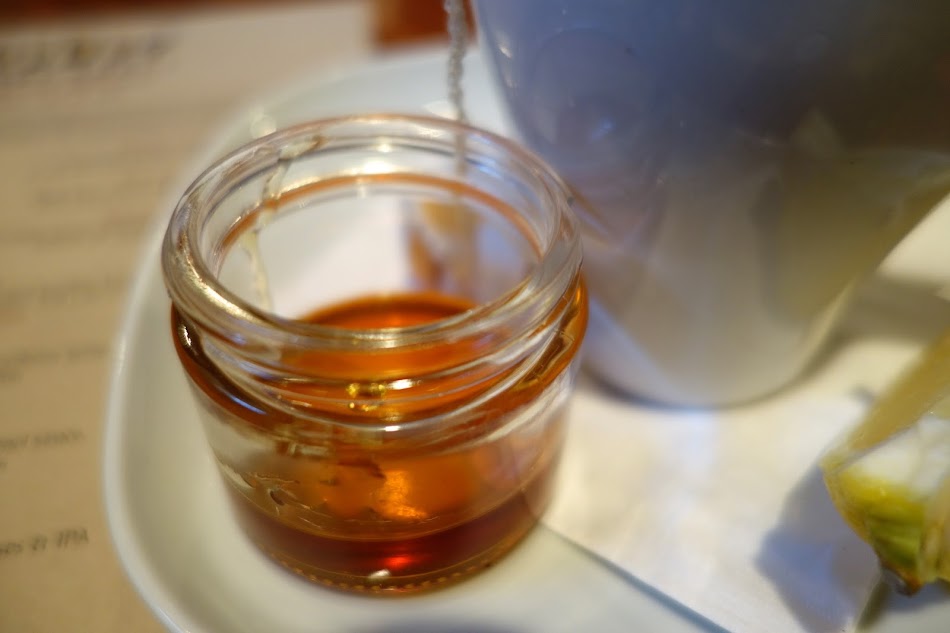 We wasted no time ordering cocktails, starting with the house mimosa. 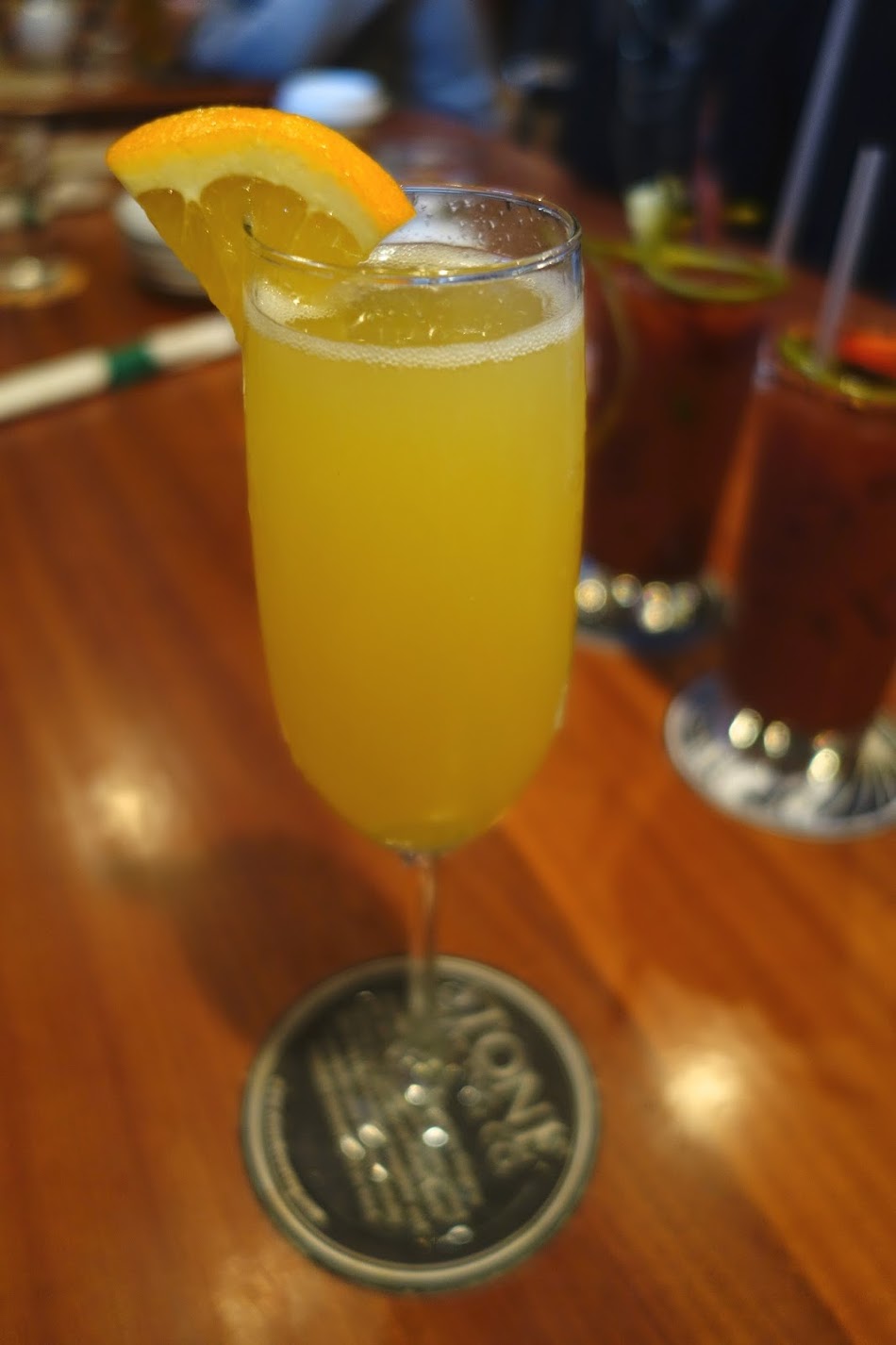 Two of us decided to build our own Bloody Mary drinks. How dramatic are those garlic scapes twisting out of the glasses like vines? 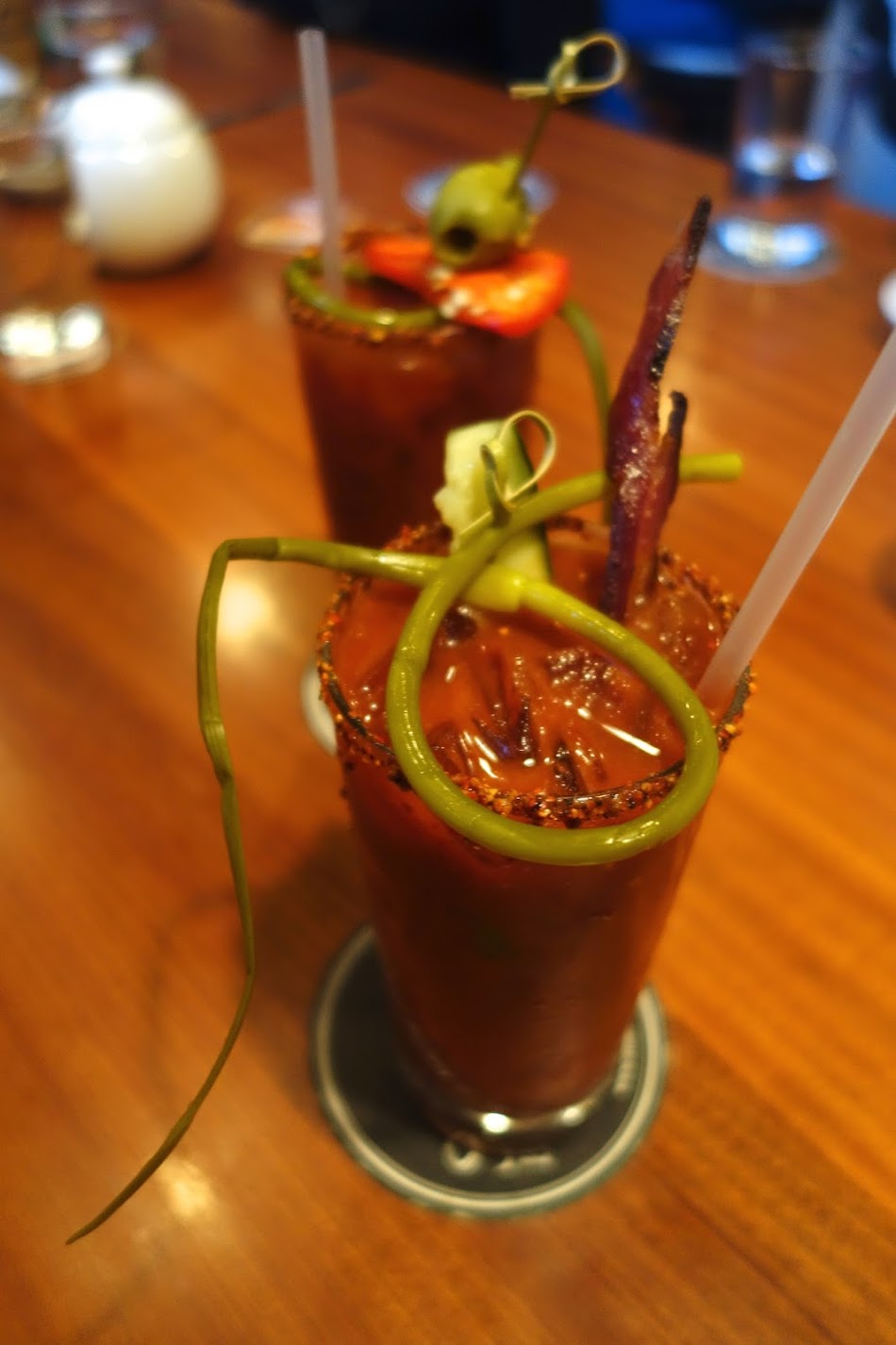 My friend ordered hers garnished with bacon, a truly decadent choice! 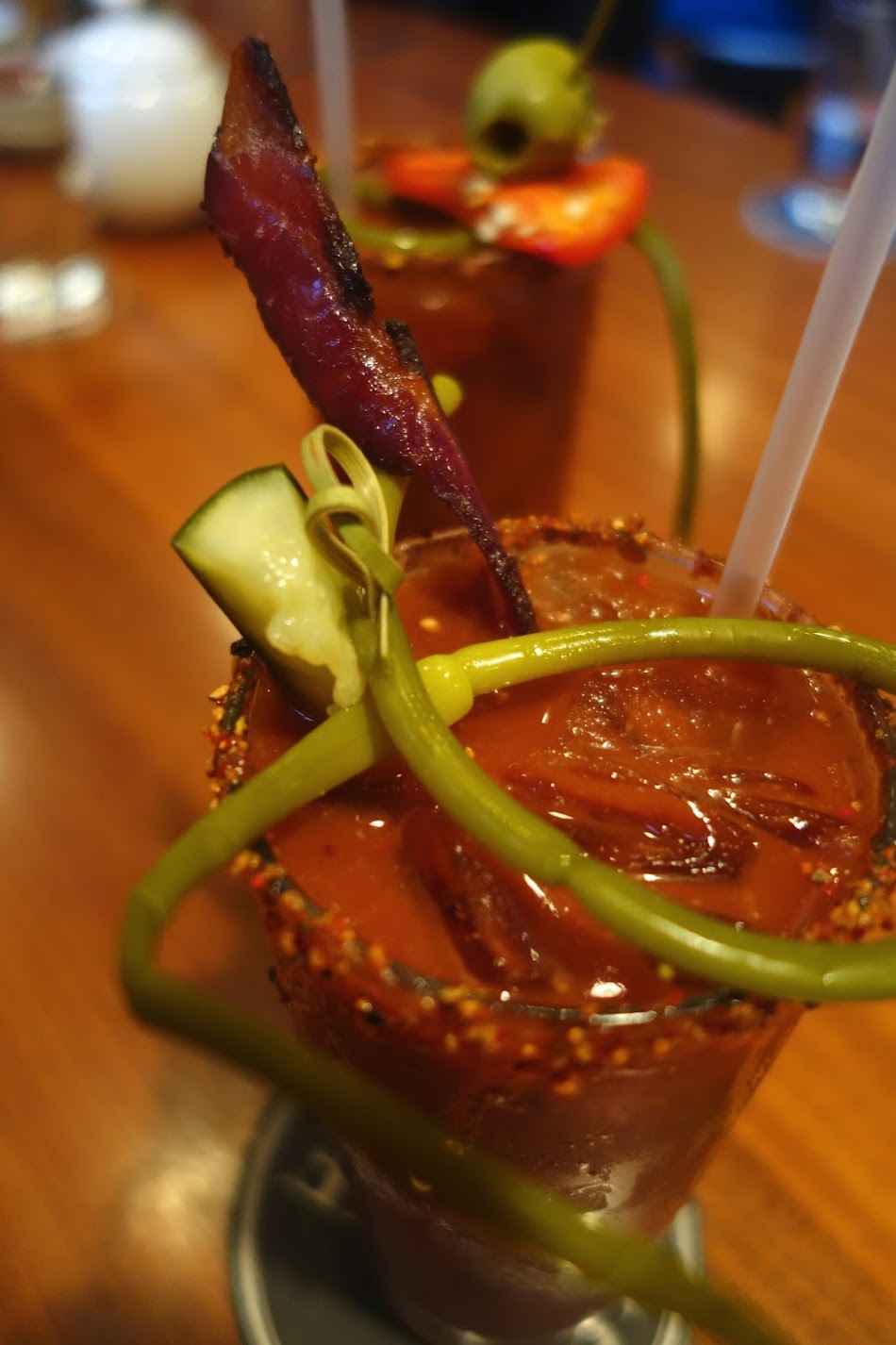 My Bloody was topped with the garlic scape, a jalapeño slice and a nice, big olive. 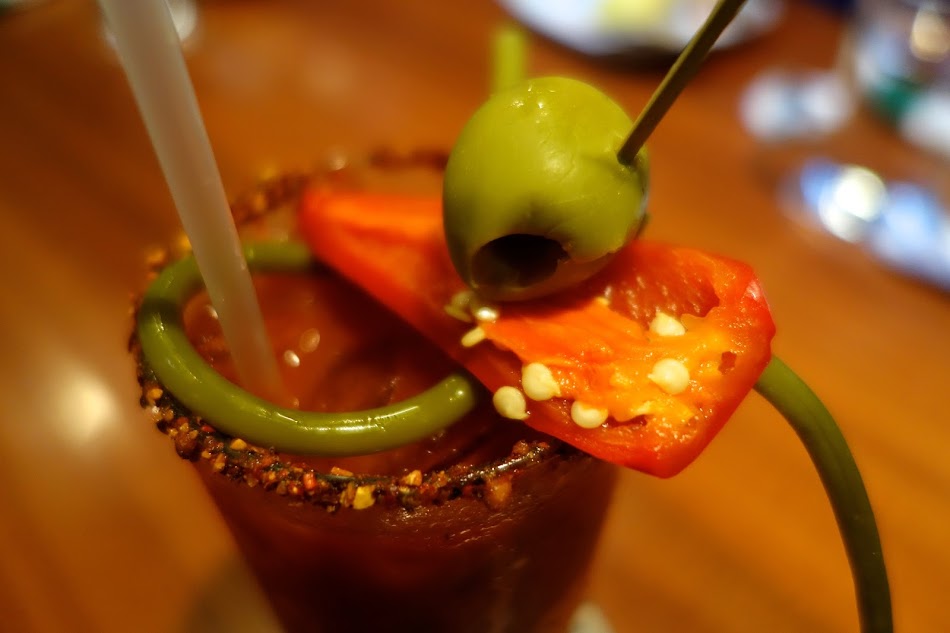 I still think the best Bloody Mary is at The Sinclair in Harvard Square, but the Armsby Abbey DIY drink is a valiant contender.

For our brunch meal, we were so enticed by the myriad of menu options that we decided to order a bunch of plates and share everything.

The first dish to arrive was the chicken sandwich. It was house smoked chicken with arugula, pickled hot pepper cream cheese spread and a fried egg on an ale roll with a side of dressed greens. 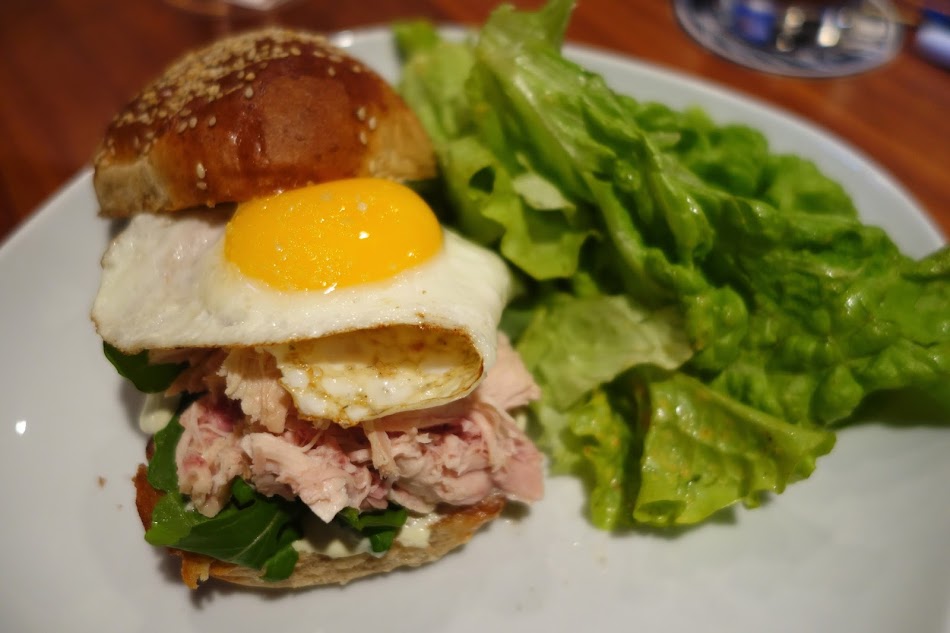 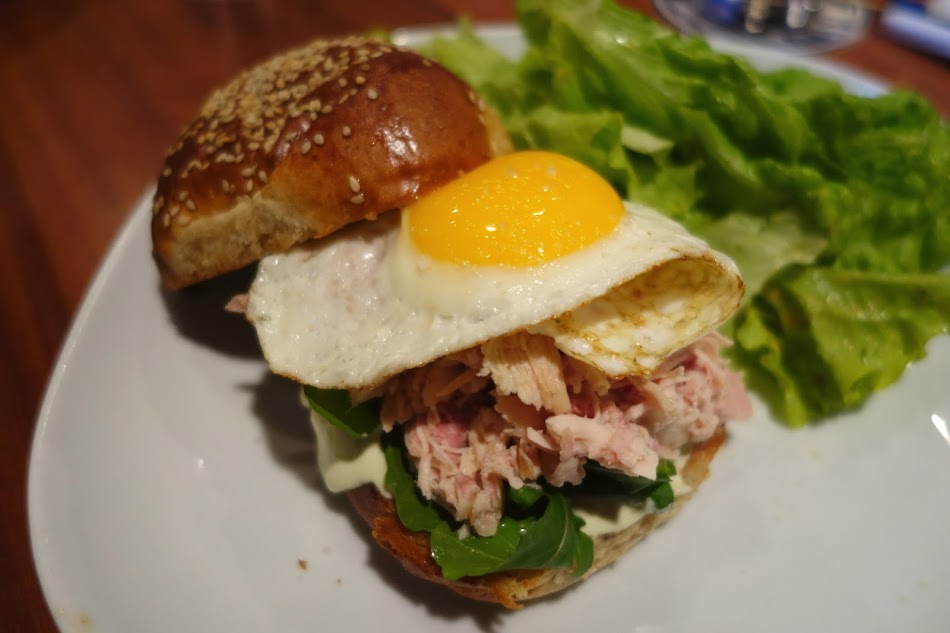 The girls were raving about this sandwich, calling it "amazing." The group consensus was, "The egg is cooked perfectly. It's the right ratio of bread to goodies. Each bite has a nice kick to it from the hot pepper cream cheese spread." 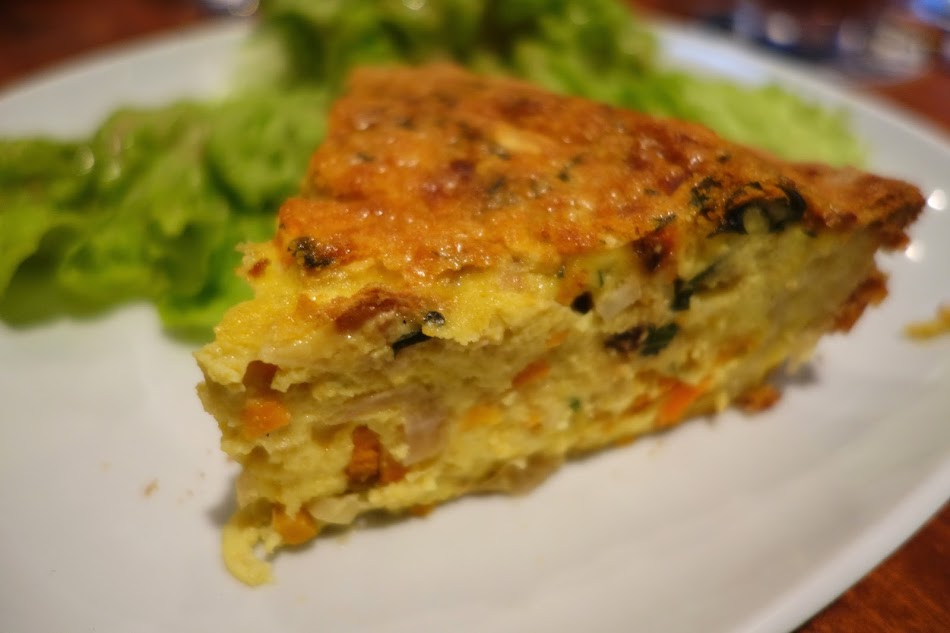 After we each had one bite, we agreed the quiche was a bit dry and that the vegetable tastes were quite subtle.

Then we moved onto the hash, a fennel sausage hash over beet puree, topped with a soft cooked egg. How beautiful are the colors in this dish? 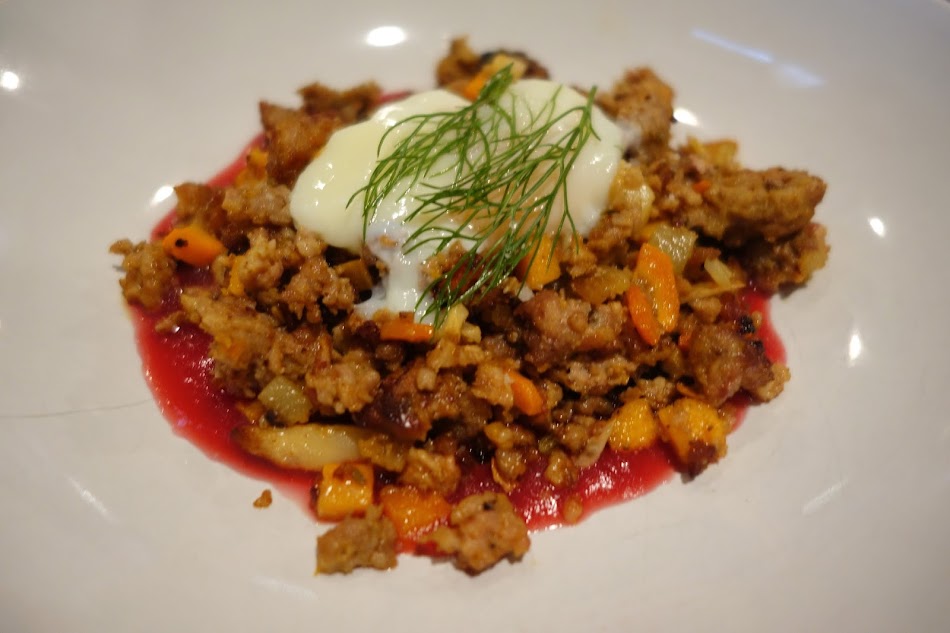 I didn't taste this dish personally, but it was reported to me that, "The sausage in the hash is delicious. It's nice to have the runny egg, which helps bind everything together."

There were two sweet dishes calling our names, but we ultimately decided on the apple cider waffle. It was piled high with apple compote, salted caramel sauce and limoncello whipped cream. 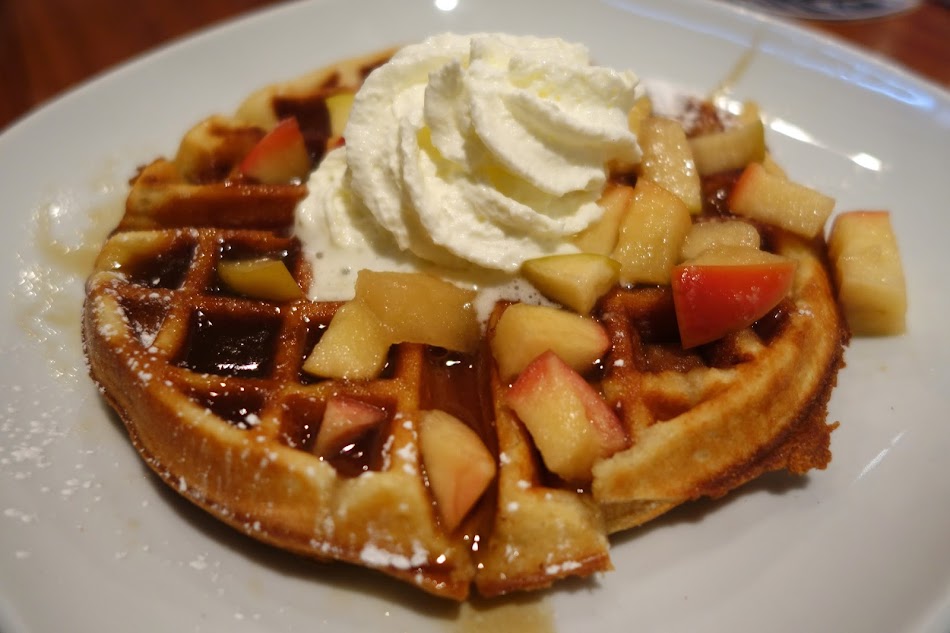 The waffle itself was very tasty and the salted caramel sauce was not too sweet. The apples were a nice, fall touch.

I have intentionally saved the best for last. The most incredible dish of the entire meal was Armsby Abbey's signature mac & cheese. It's made with an assortment of local cheeses, IPA and homemade rustic ale-bread crumbs. 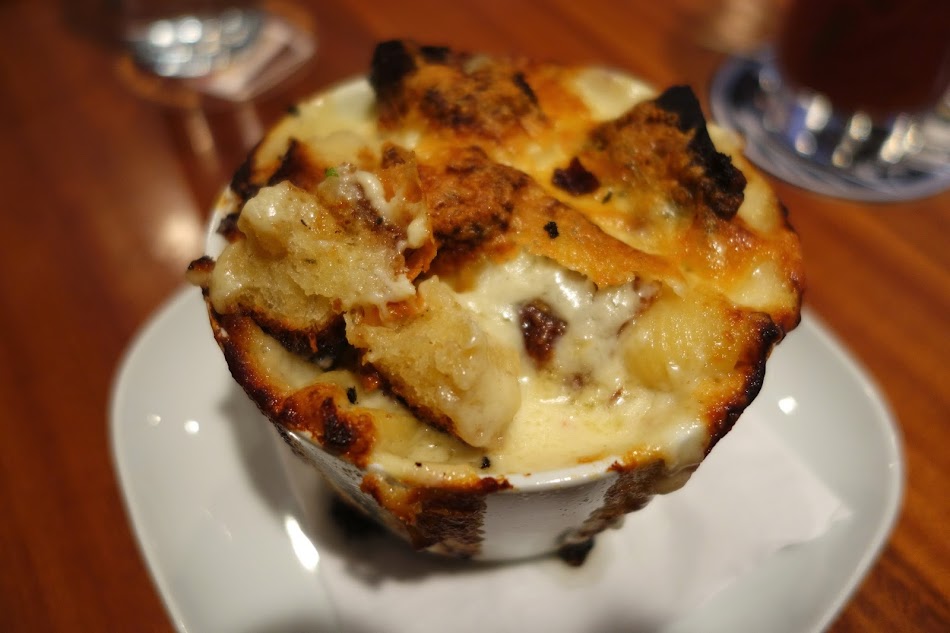 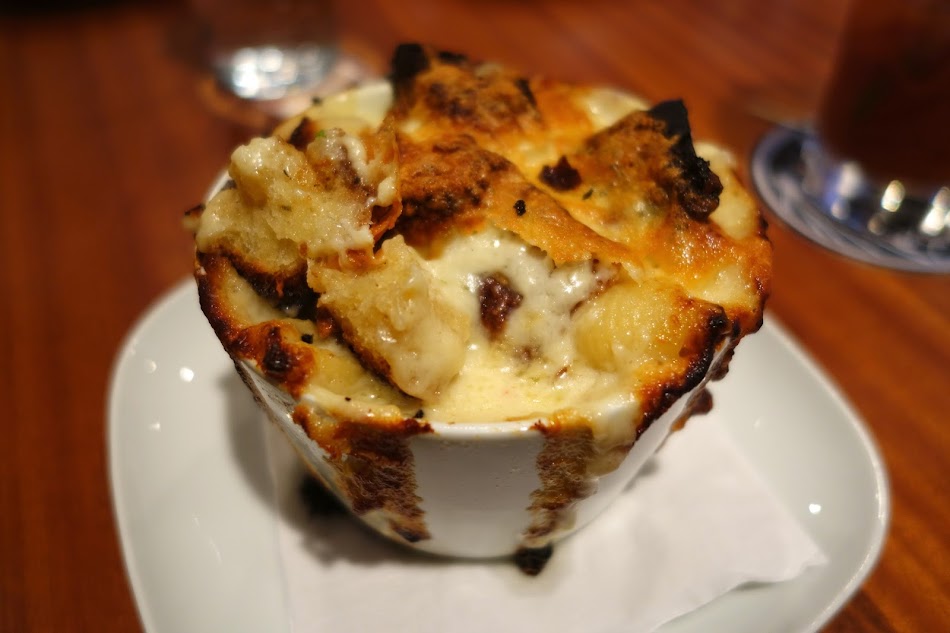 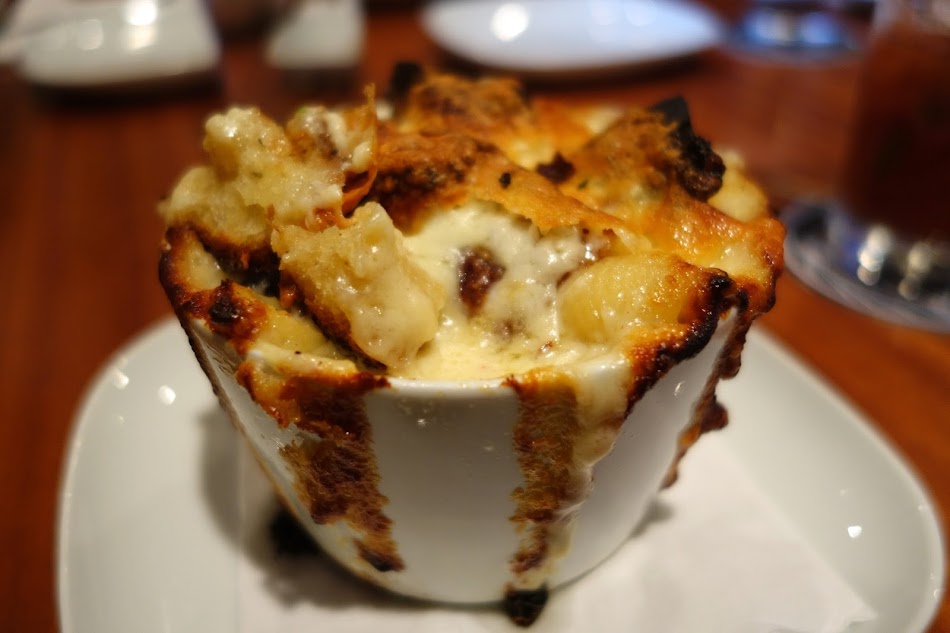 The mac & cheese was so exceptional that we placed a second order and licked both bowls clean. 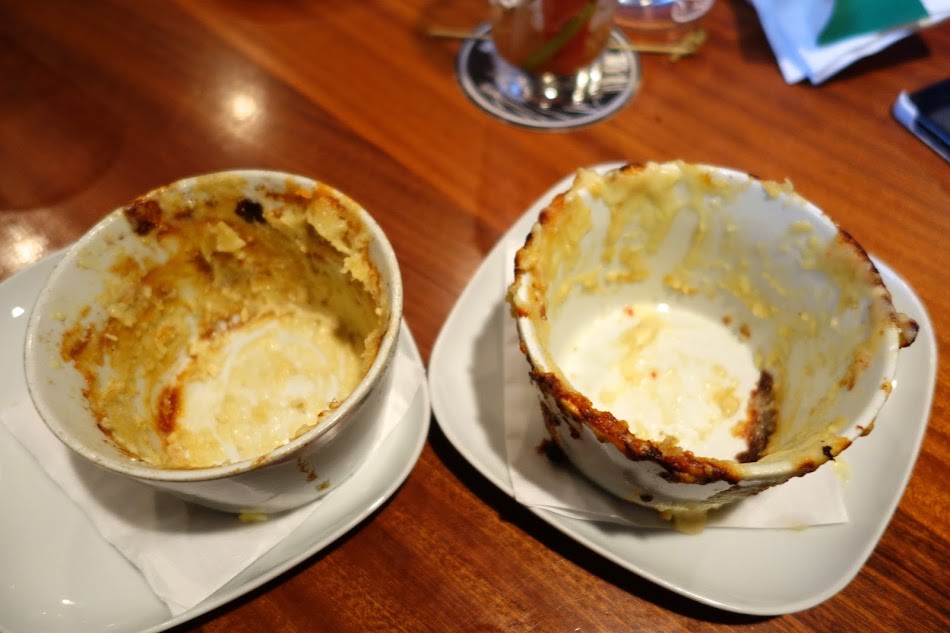 Maybe it was the cubed bread on top, maybe it was the smoky flavor in the cheese or maybe it was the classic pasta shells - no matter the ingredients, the finished product was superb. I would drive all the way to Worcester to sit at the bar, eat this mac & cheese and then turn around and drive home.

Armsby Abbey was the icing on the cake of a truly perfect weekend. Thanks to our fabulous hostess, I experienced a ton of awesome new places, less than an hour from my front door.

If I could recommend an itinerary for a day trip to Worcester, I'd suggest starting with brunch at Armsby Abbey, heading over to Crompton Collective for a few hours of shopping and farmer's market perusing, followed by a hot drink and a pastry at BirchTree Bread Company.

I was taking a gander at some of your posts on this site and I consider this site is truly informational! Keep setting up.The Avenir Price List

I’m excited to uncover this page. I need to to thank you for ones time for this particularly fantastic read!! I definitely really liked every part of it and i also have you saved to fav to look at new information in your site. lebanese arabic