There are so many reasons to love the North Shore - the Topsfield Fair in Topsfield (duh), the Peabody Essex Museum in Salem, Good Harbor Beach in Gloucester, Bearskin Neck in Rockport and more. 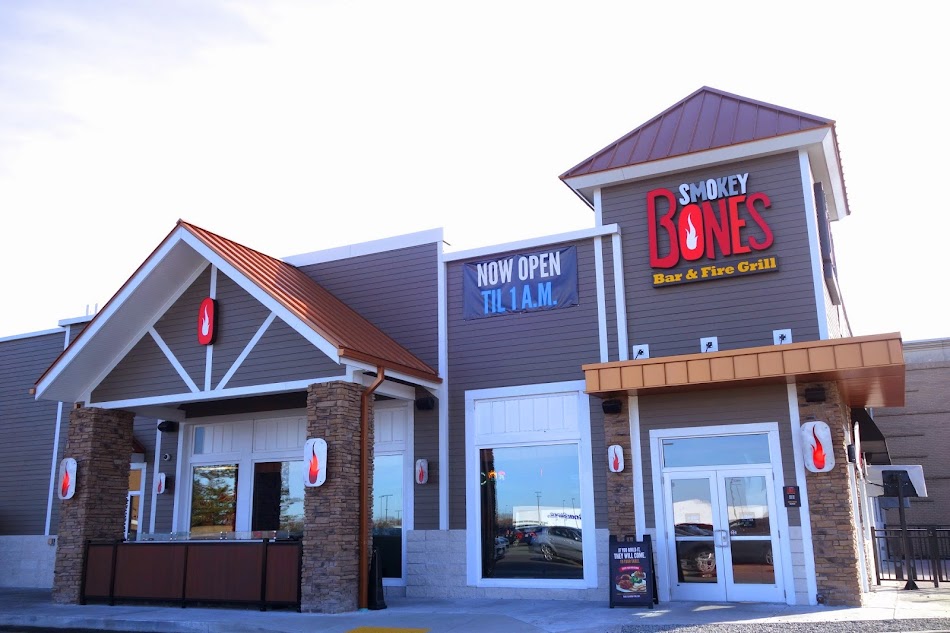 A few weeks ago I made the trip up to sample the best of Smokey Bones' menu.

Inside the restaurant, the decor is a mix of black, cherry red, burnt orange and mustard yellow. 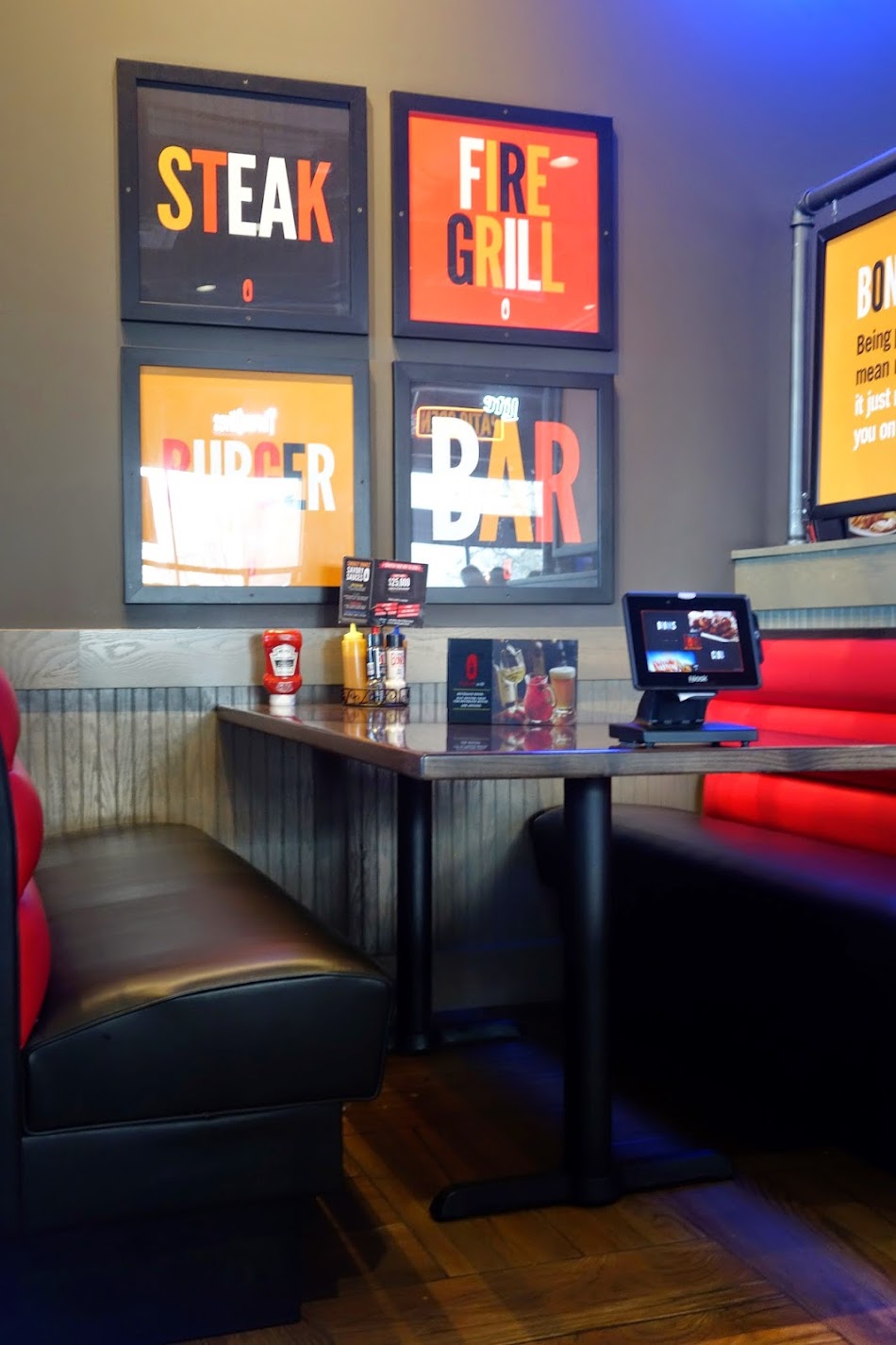 In the center of the dining room is an enormous bar with countless TV in every direction. This is definitely a game day spot. 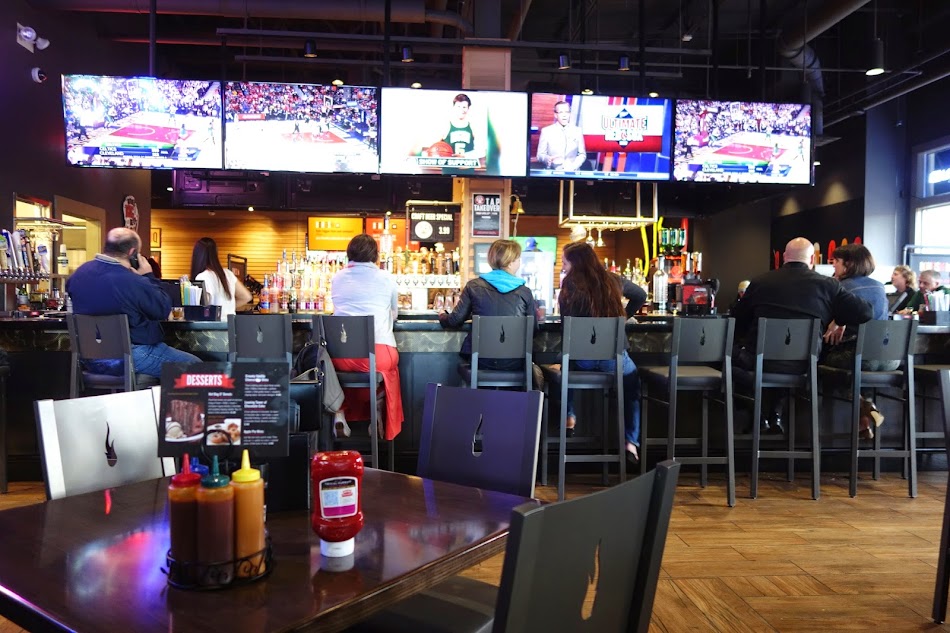 When we were seated at our table, the hostess left us with this digital ordering system. Apparently we could have forgone our waiter all together and just placed our order right on the screen. 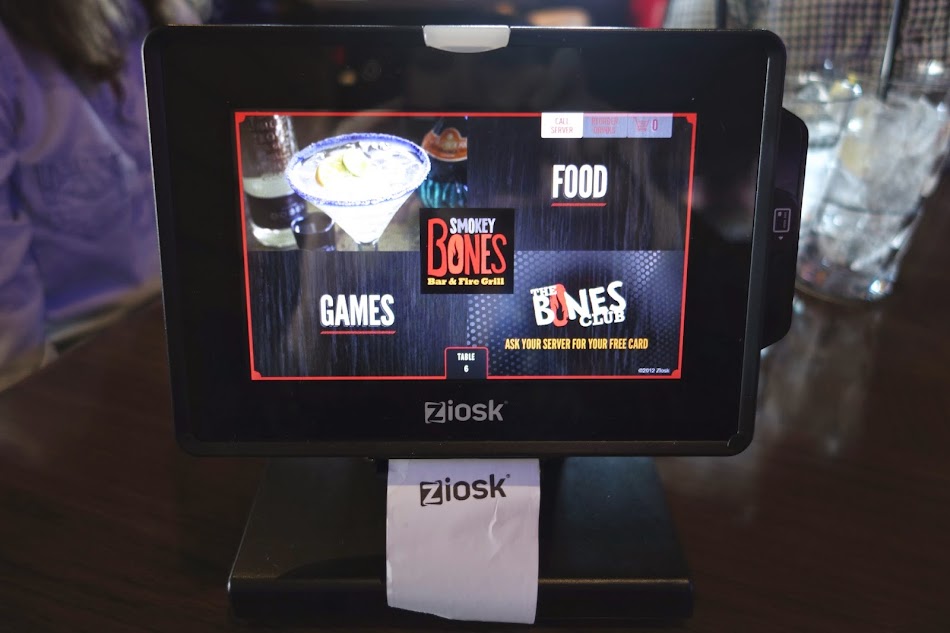 I'm a little old school, so we did ask for the paper menus. I'm so glad we did because I loved this quote on the front cover. 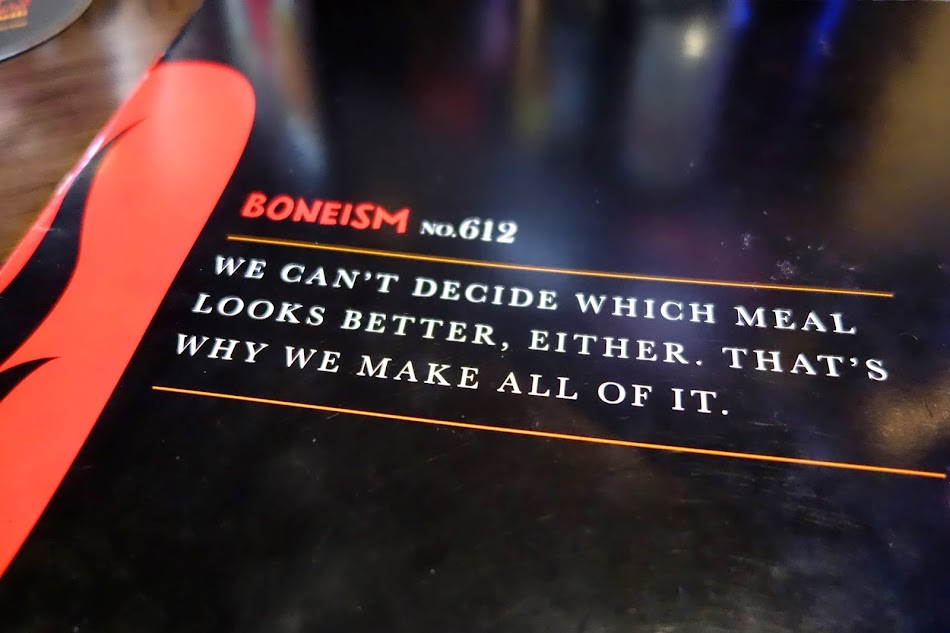 After perusing the menu and placing our order, we noticed a caddy on our table full of sauces. These are the house made Smokey Bones BBQ sauces and they are color coded (the color key is attached). 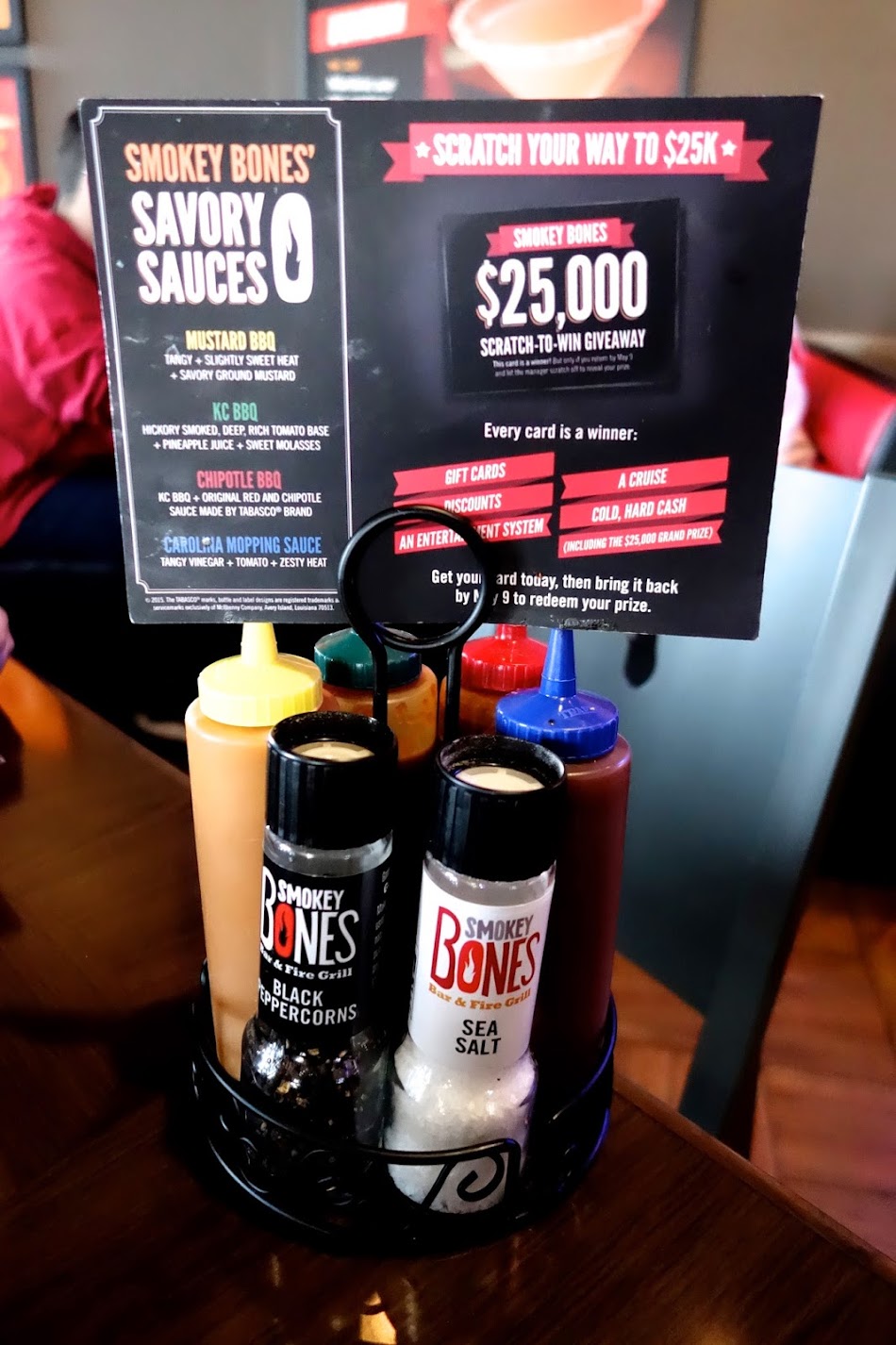 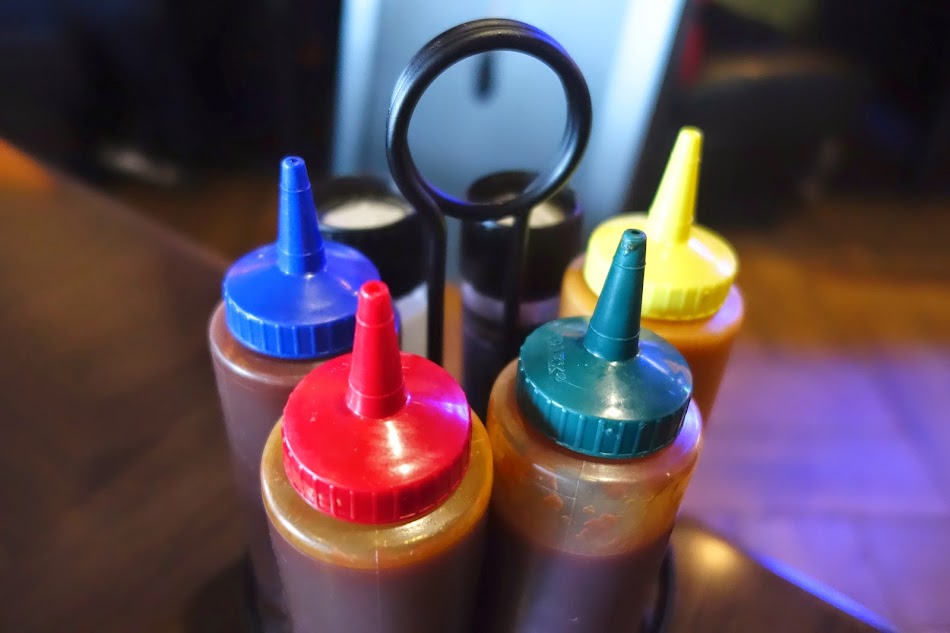 Since Smokey Bones is known for their wings, that was the first thing my dinner dates zeroed in on. Before the wings arrived, a plate was delivered with wet naps and a giant brown paper bag. I asked my cousin, "What is the bag for?" He smiled and replied, "The bones." Ohhhh. That's my vegetarianism in full force right there. 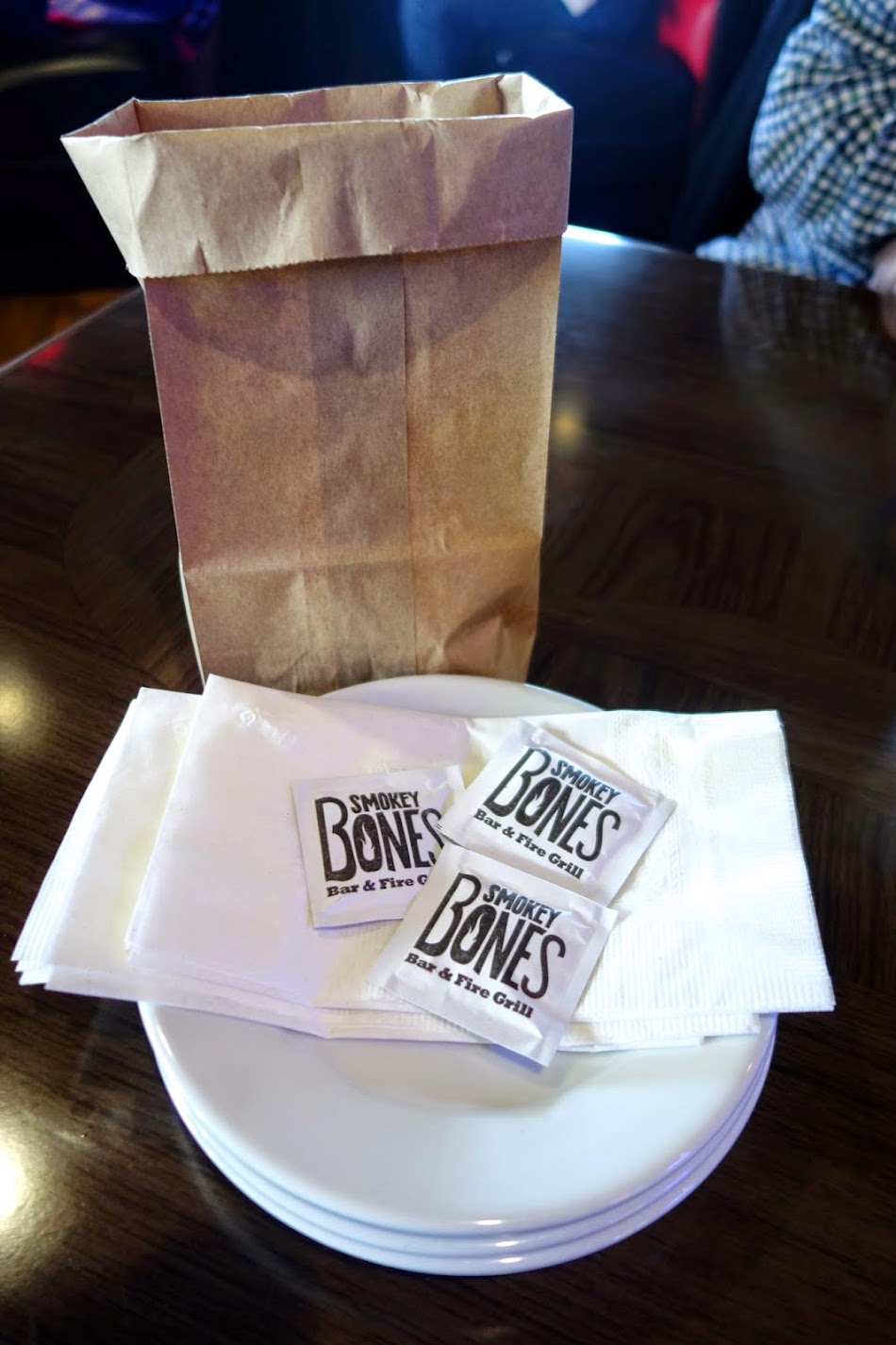 A few minutes later the Smokey wings (their signature flavor) made their debut. They were garnished with something that reminded me of the Mexican Cheetos at Lulus in Allston. 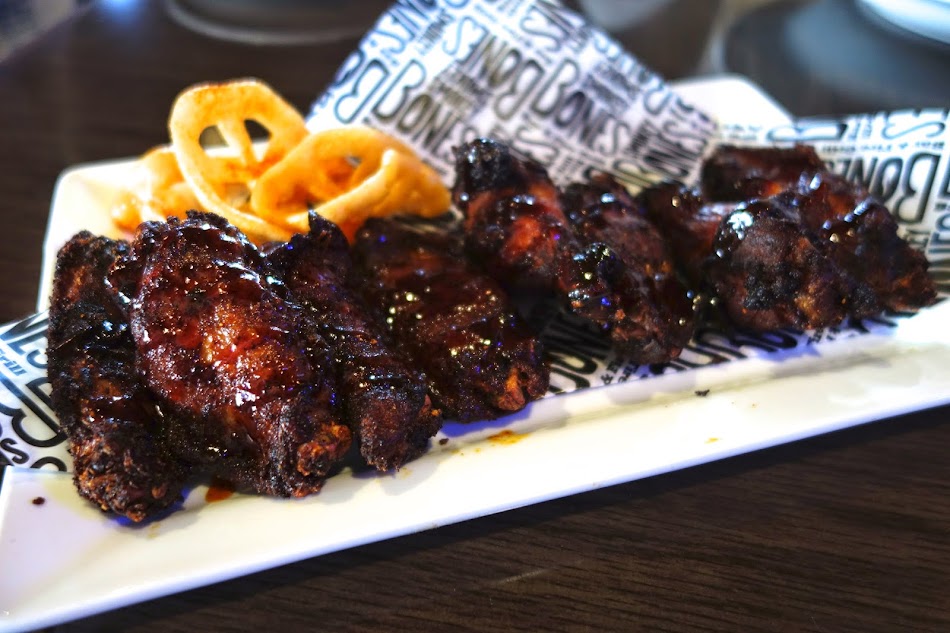 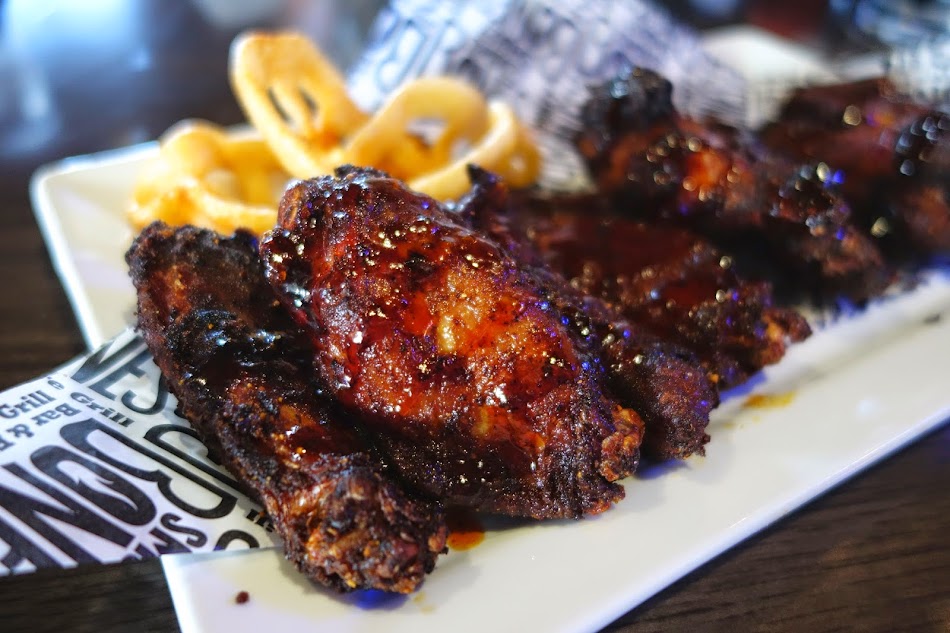 After making the wings disappear, I asked for their commentary. My cousin and his girlfriend had very different opinions. One said, "These were pretty dry wings. They didn't have a ton of sauce or a dipping sauce to go with them." The other chimed in, "I thought the wings had a very smokey flavor and were nice and juicy. They were baked and not fried, so you could really taste the meat. After eating them, instead of feeling weighed down, I was actually hungry for more food. They were a great primer."

Along with the wings, we also shared the fried pickles. I just can't resist them on a menu! The Smokey Bones rendition were pickle chips (as opposed to spears) and were sprinkled with a healthy dose of black pepper. They were accompanied by a delicious, creamy dipping sauce. 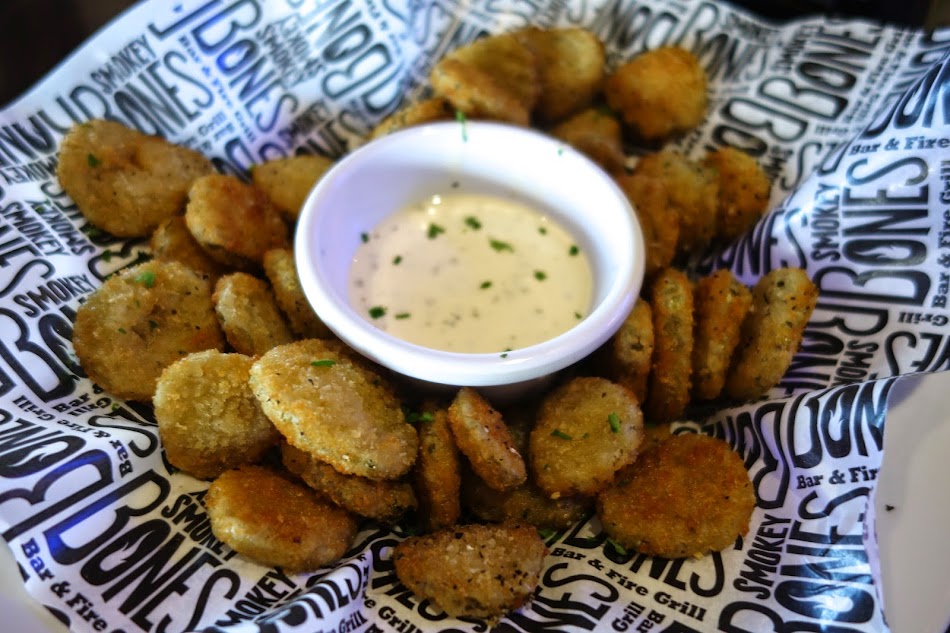 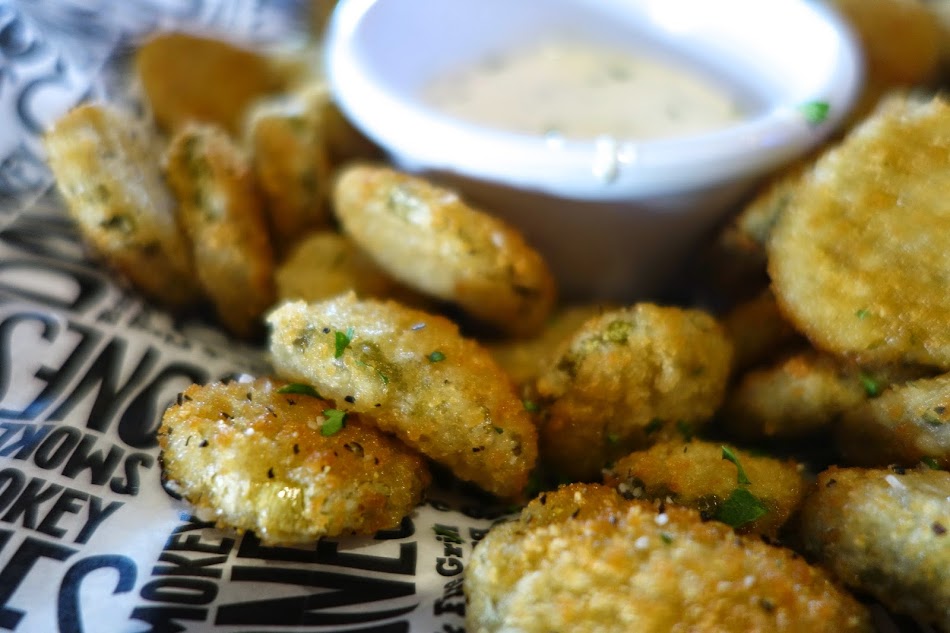 For the entree round, my dinner dates ordered up a BBQ smorgasbord - brisket, turkey and chicken. 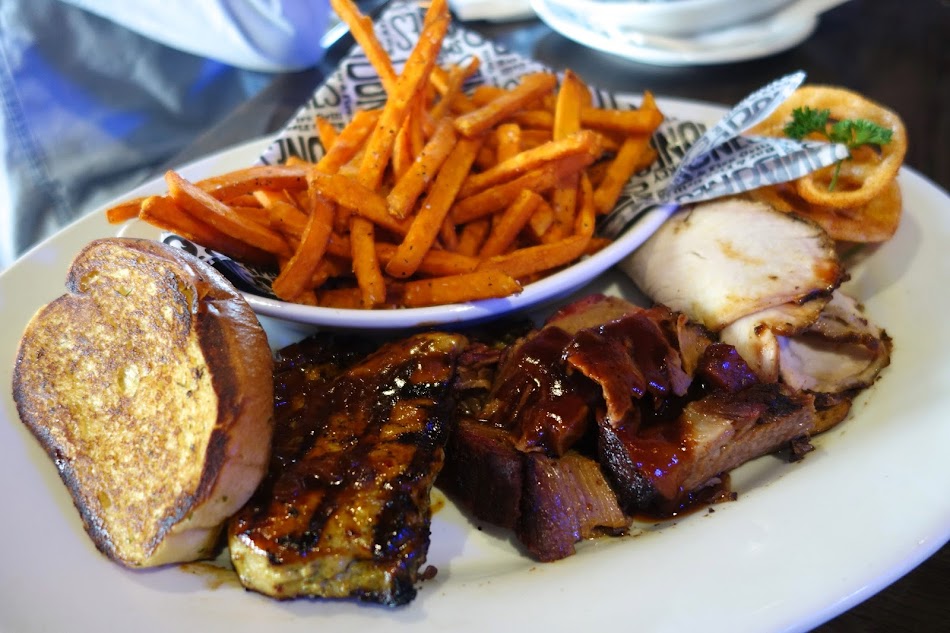 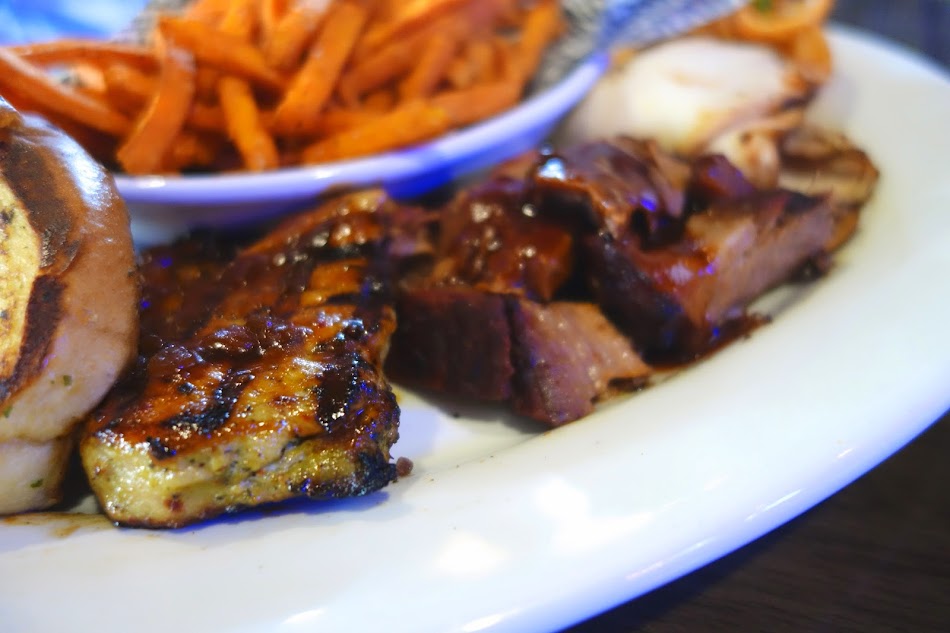 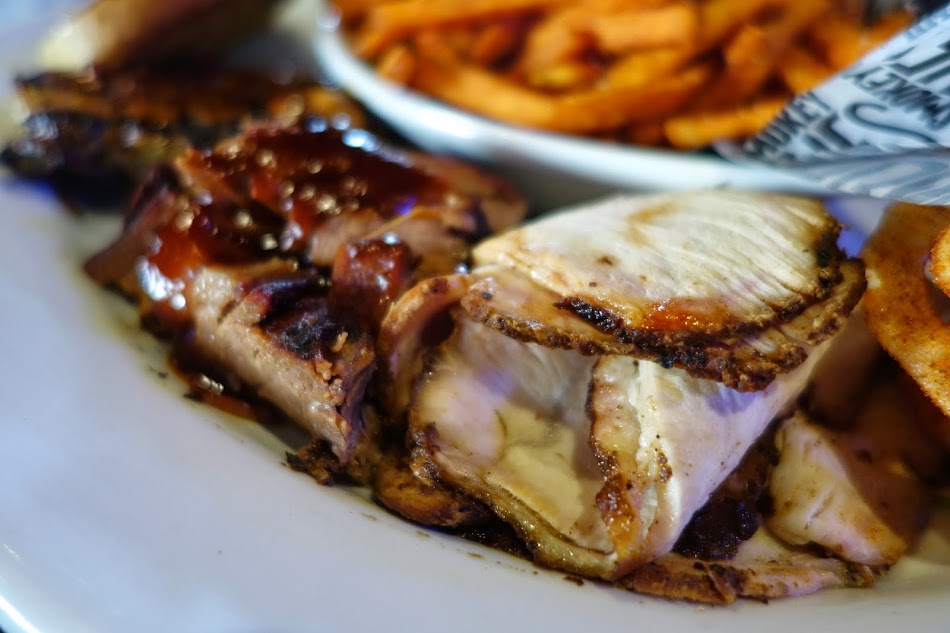 They started with the brisket and commented, "It's a bit dry, but the sauce is definitely good. It had a nice tangy flavor." Next they moved onto the turkey and reported, "We wished it had been cut thicker. It had a good, smokey flavor, but it probably would have tasted better in a sandwich as opposed to on its own." Lastly, they tried the chicken and said, "This was the most underwhelming. The wings were way better."

The best thing on the BBQ plate was the sweet potato fries. They were cut super thin and seasoned with black pepper (just like the fried pickles). 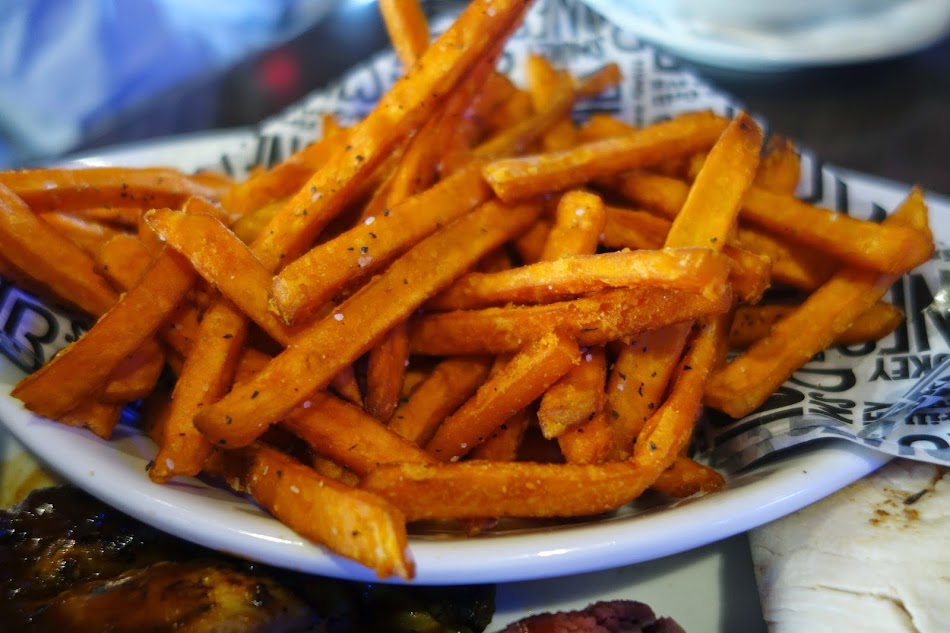 Despite having already consumed wings, fried pickles and sweet potato fries, we also had to have the tater tots. My cousin called these "upper tier tots." They were extra crispy, and like everything at Smokey Bones, covered in pepper. We also loved the dipping sauce which was a mix of Smokey Bones' KC BBQ sauce, ranch dressing and Montreal pepper. 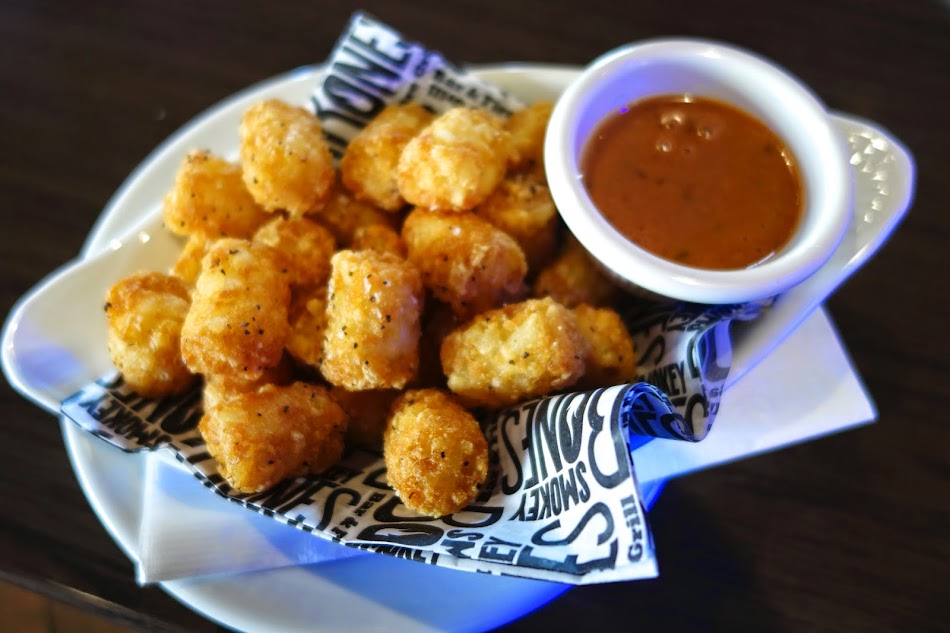 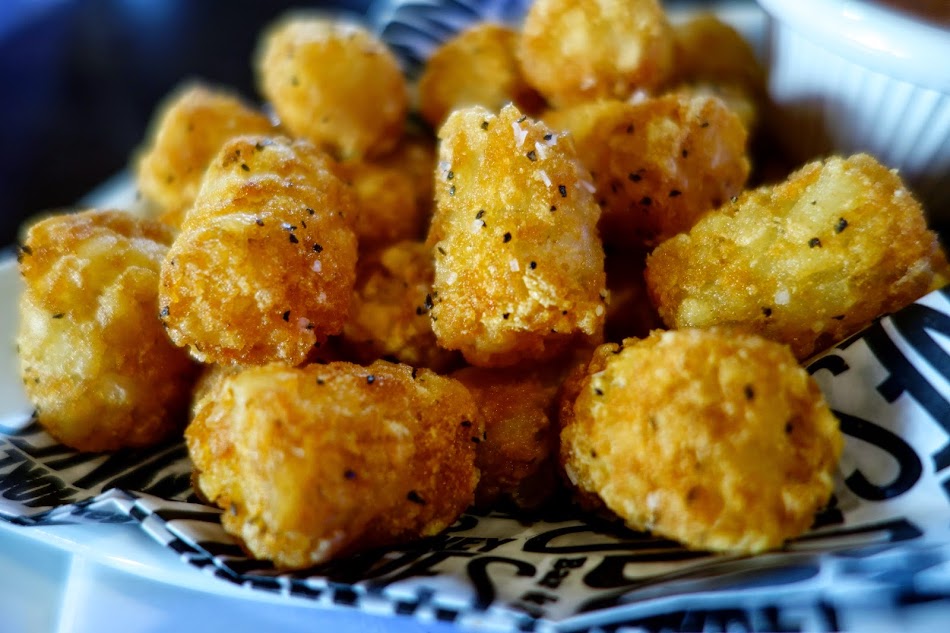 Just when you thought we couldn't possibly ingest any more junk food, we did! Bring on the onion rings. 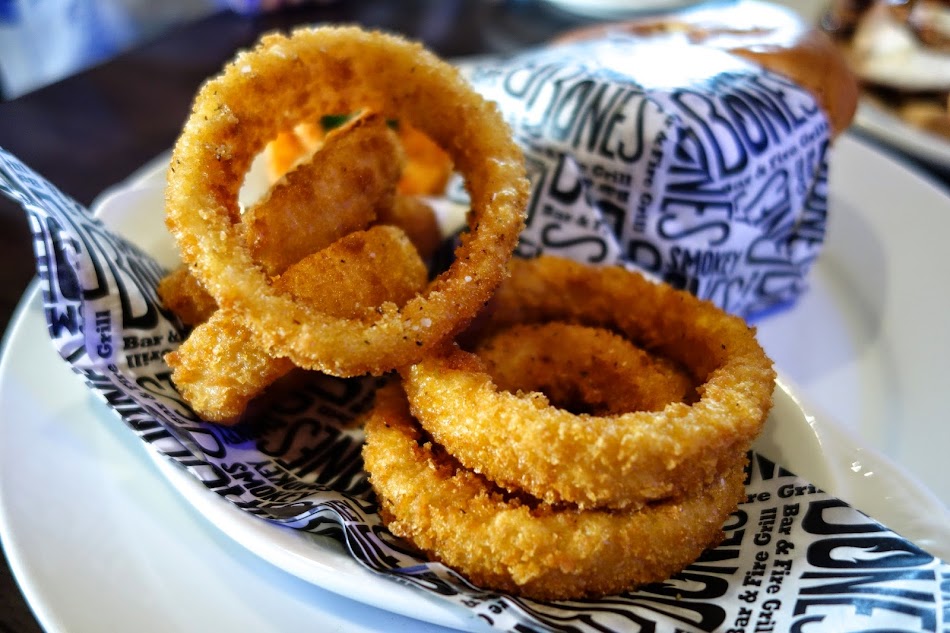 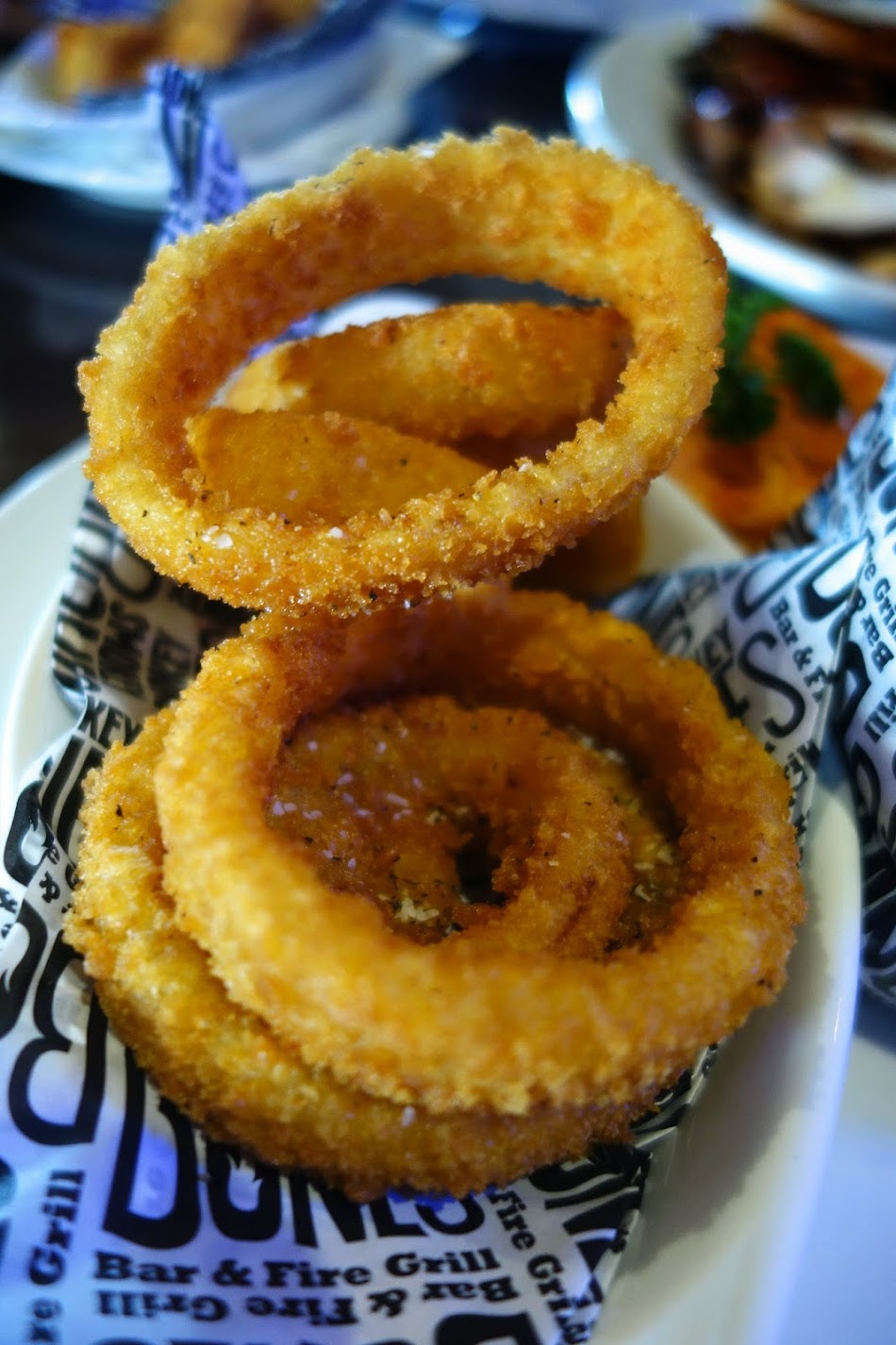 These onion rings were expertly crisped, but hard to eat. With every bite the entire onion would slide out of its batter casing.

I felt I had to taste test for all my fellow vegetarians and ordered the veggie burger. When it arrived, I thought it looked rather tall. Turns out it was a double patty! I could feel my waistline expanding just by looking at it. 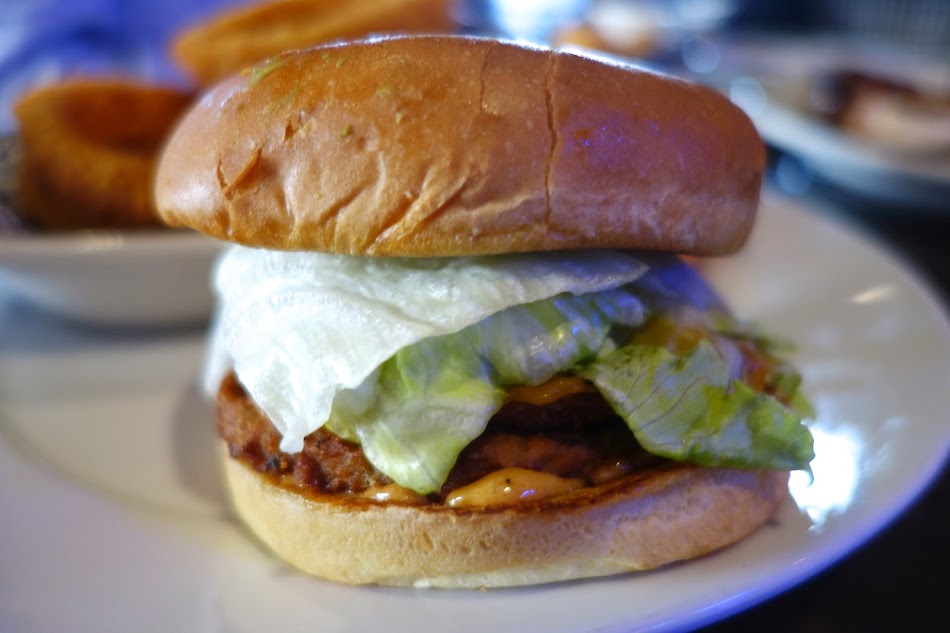 After the entrees, we were ready to pack up and head home. Both our waiter and the manager insisted we try the bag of donuts. We all looked at each other and exchanged a skeptical glance, but opted to take them up on the suggestion.

The bag of donuts are exactly that, presented in a white paper bag. They are accompanied by a chocolate and a raspberry dipping sauce. Our waiter shook the bag at the table, telling us they do that to ensure each donut is evenly coated. 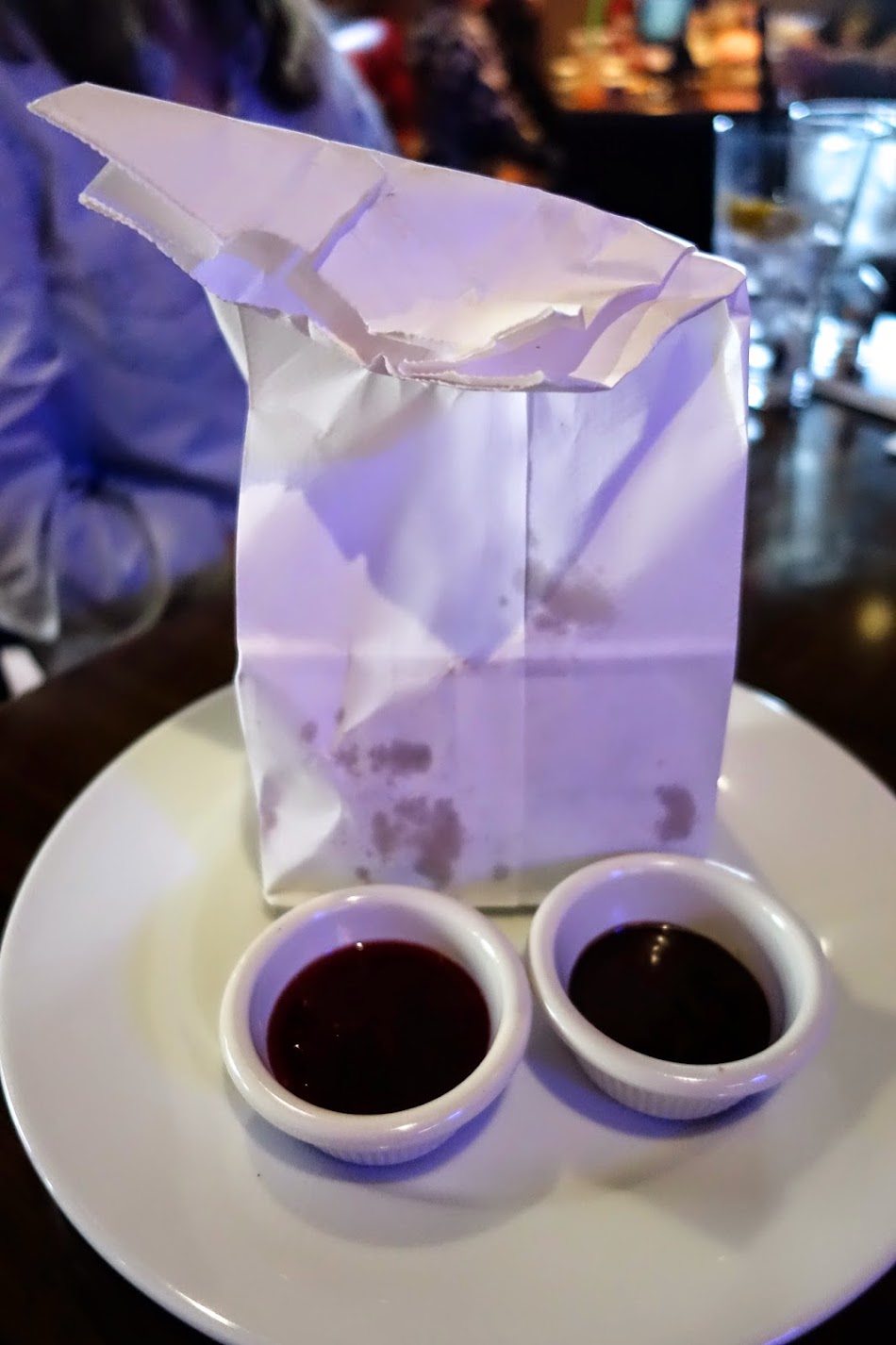 These donuts were honestly the best thing we ate all night. They were doughy, but not heavy, and laced in cinnamon and sugar. 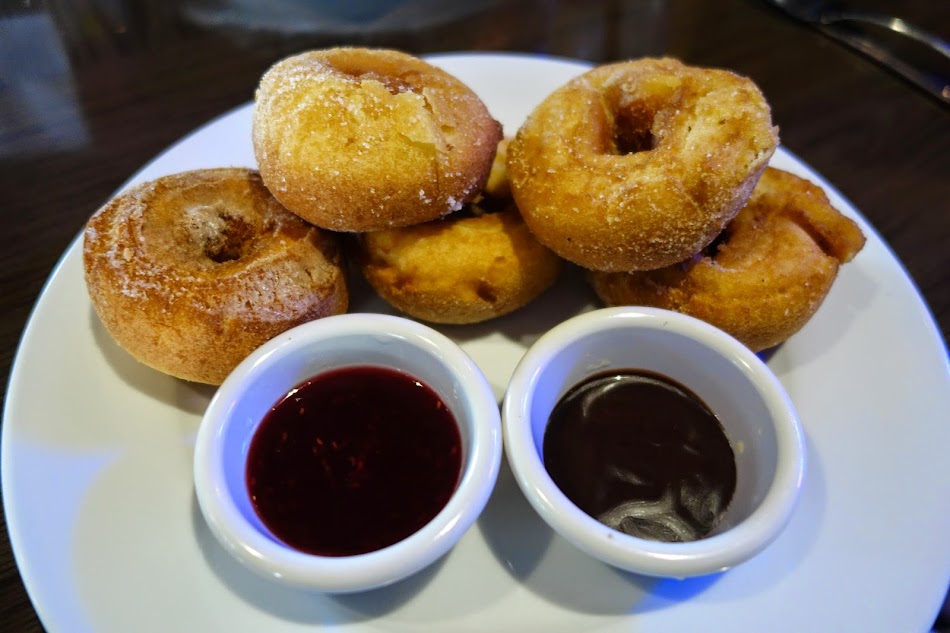 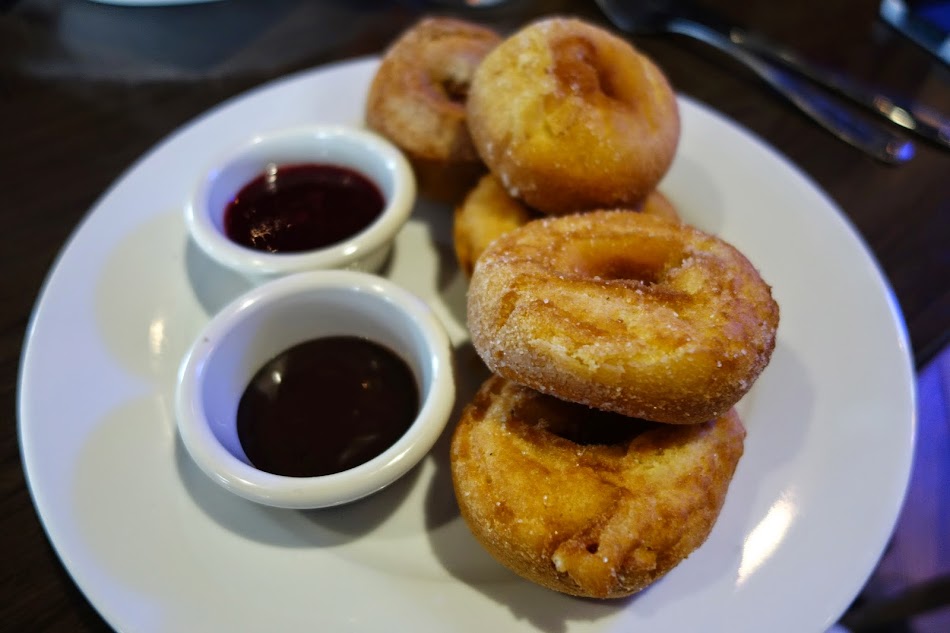 I would drive all the way to Peabody just to eat these again. For real.

Now for the fun part, the team as Smokey Bones is offering one lucky Pop.Bop.Shop. reader a $25 dollar gift card to use towards your first visit.

All you have to do to enter is leave a comment below with your favorite BBQ dish.

Those donuts sound incredible! And my fave BBQ dish is pulled pork. By a MILE!

Congratulations, Olivia! You are the winner! Your pulled pork awaits.

i would drive up to boston just to eat here. yum!

The Dairy Witch in Salem, MA serves up some crazy creations for their sundae of the week.

It's no secret that my greatest thrill is trying a new restaurant. That experience is even more treasured when the restaurant is owned by a friend. Dan Bitler and Matt Brady, the former executive chef and manager of Back Bay's Coda, have joined forces to open their very own baby, the Naumkeag Ordinary in Salem, MA.

After a fun outing to the "Hats" exhibit at the Peabody Essex Museum last weekend, my mother, my aunt and I went walking around Salem in search of some lunch. We stumbled upon Adriatic Restaurant & Bar and walked up to the menu on display in the front window. It looked like a great mix of Italian soups, salads, pizzas and sandwiches.