Happy Independence Day everyone! I can't think of anything more American to discuss today than BBQ.

I recently visited Sweet Cheeks Q, self-described as, "the American south north of the Mason Dixon."

Sweet Cheeks Q is helmed by Tiffani Faison, the fiery red head who rose to stardom on the first season of BRAVO's "Top Chef." Post-show, she ran the kitchen at Rocca right here in Boston (now closed). When Rocca shut its doors, Faison decided it was time to run her own place.

Chef Tiffani's baby is located on Boylston Street behind Fenway Park, in the space formerly occupied by Cambridge 1. 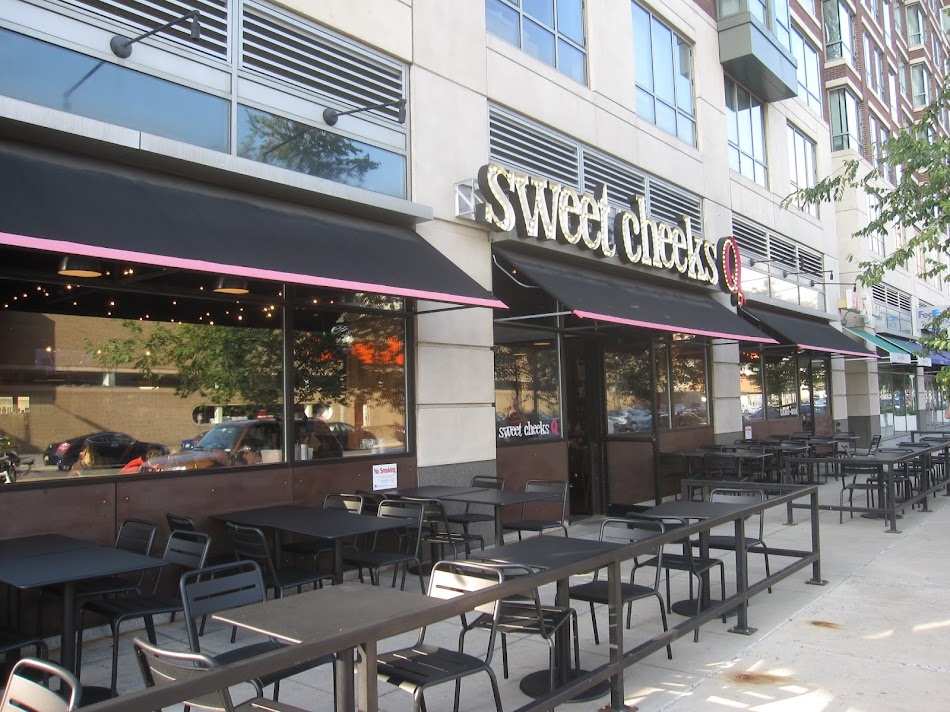 There is a bright, glittering sign out front with a hot pink letter Q. My kind of place! 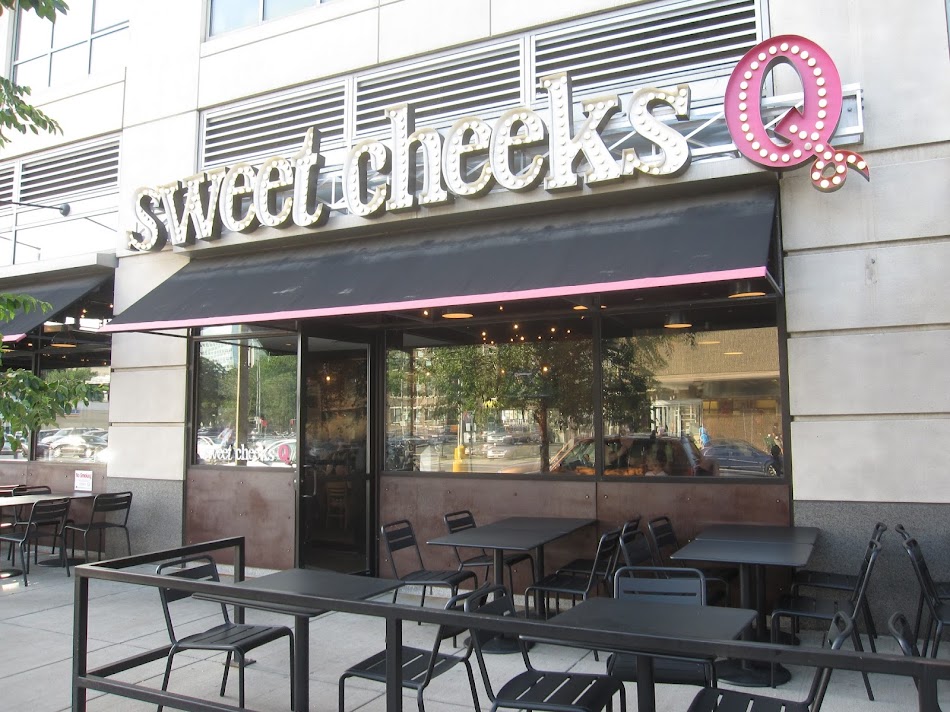 To the left of the front door is an outdoor patio. This would be the perfect place to have beers and BBQ before or after a Sox game. 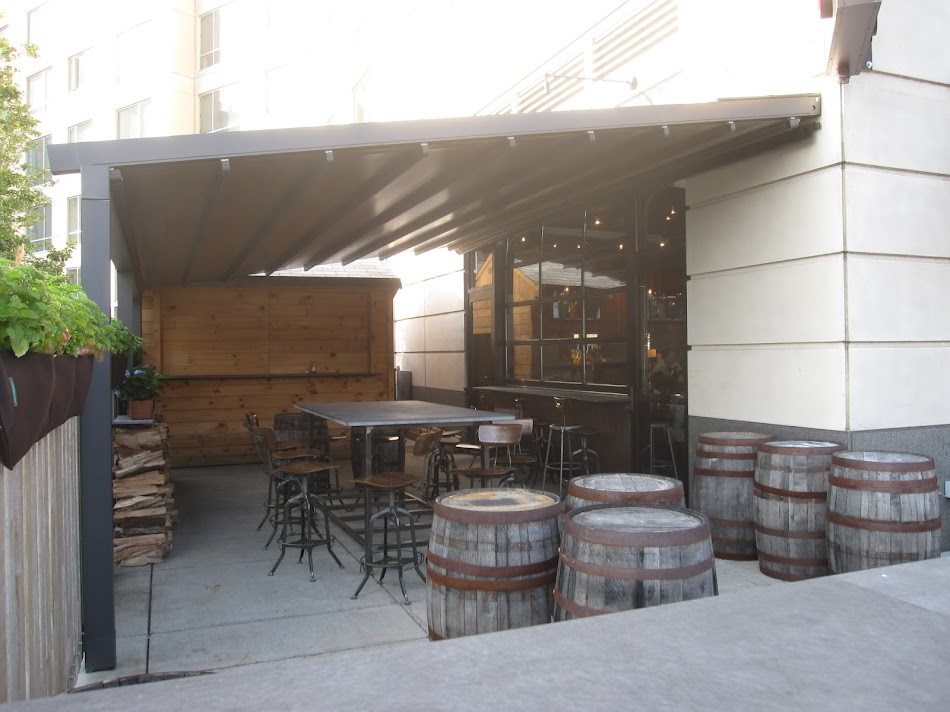 Inside, the restaurant still looks a lot like Cambridge 1, which I found shocking. Though there are southern touches with the decor, the walls, the ceiling, the light fixtures and even the bar all look very similar. 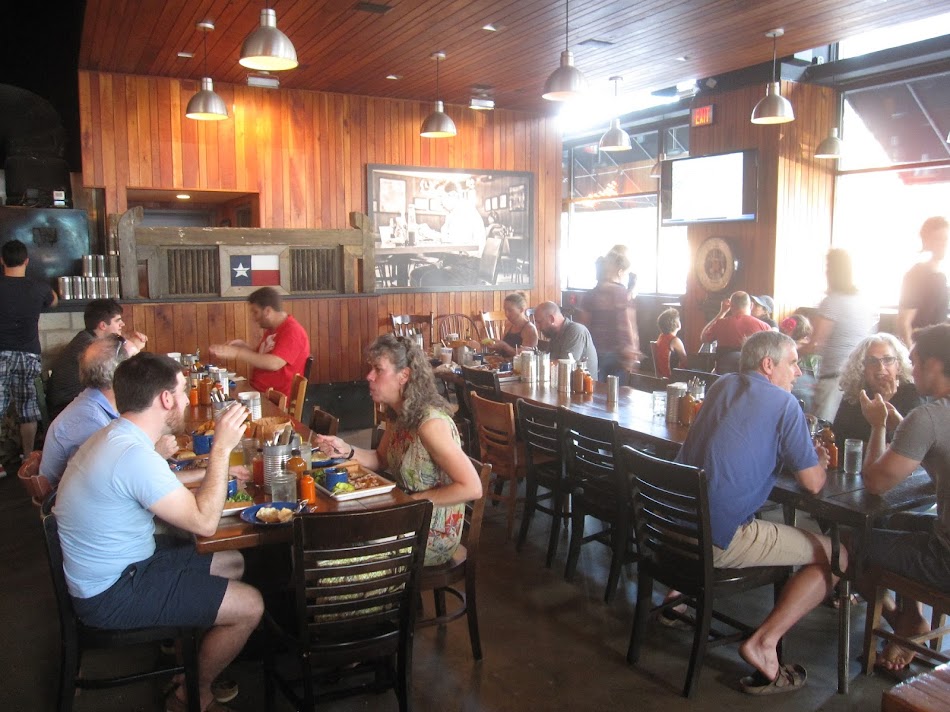 Both sides of the restaurant were absolutely packed when we arrived at 6:00pm on a Sunday night. 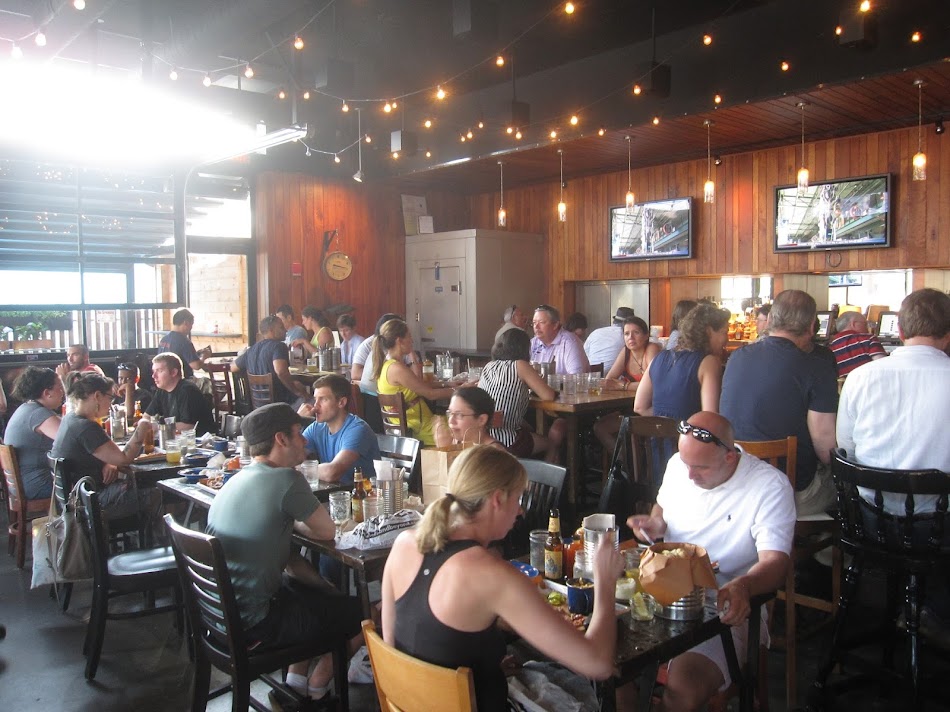 There were five of us at dinner and we were seated at a high top table. Each table has tin cans of napkins and silverware and three bottles of sauce. 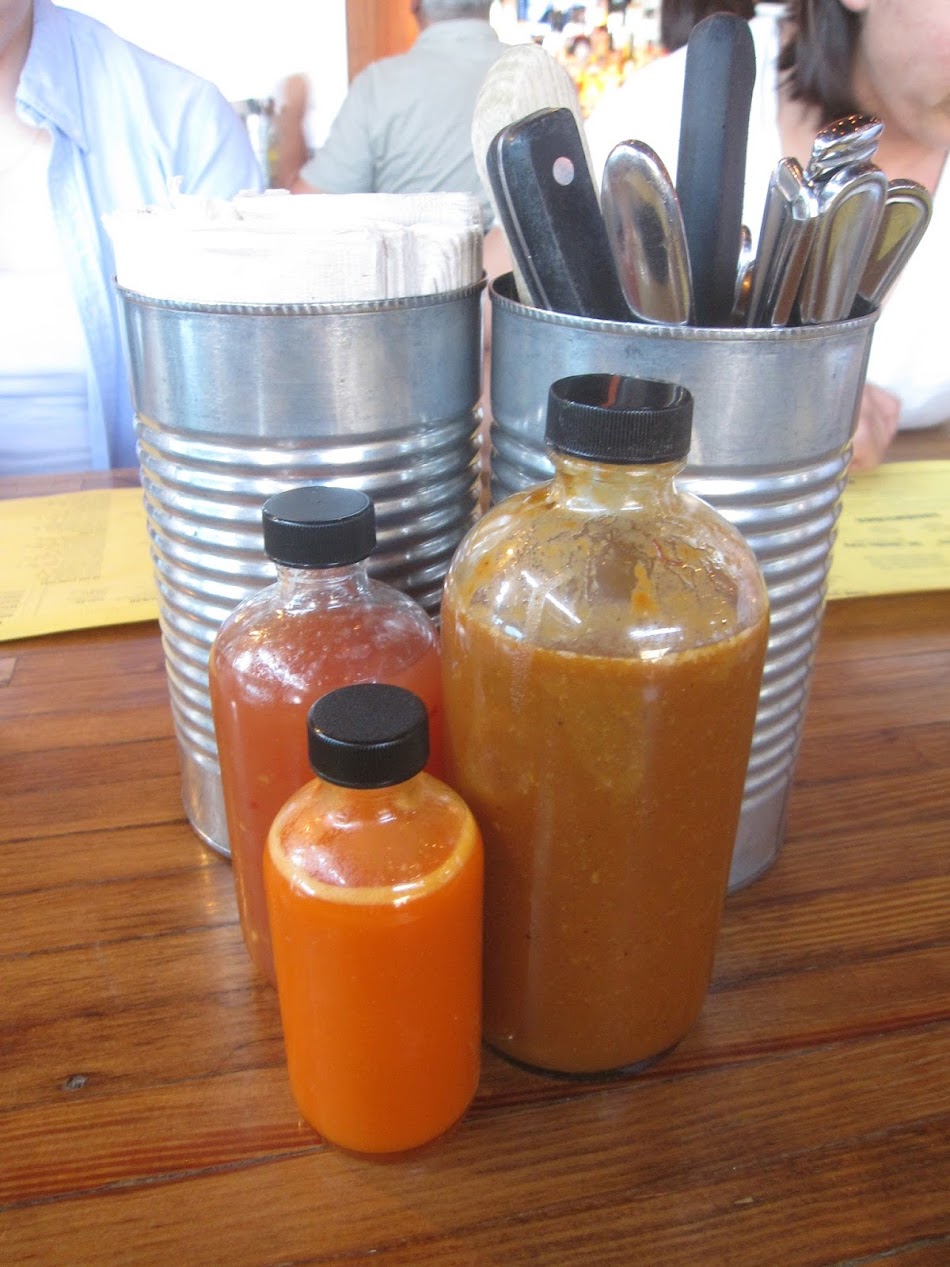 I found the drink menu so clever! The craft beer section was titled, "Oh you crafty huh?" and the list of canned beer was titled, "Nice cans." 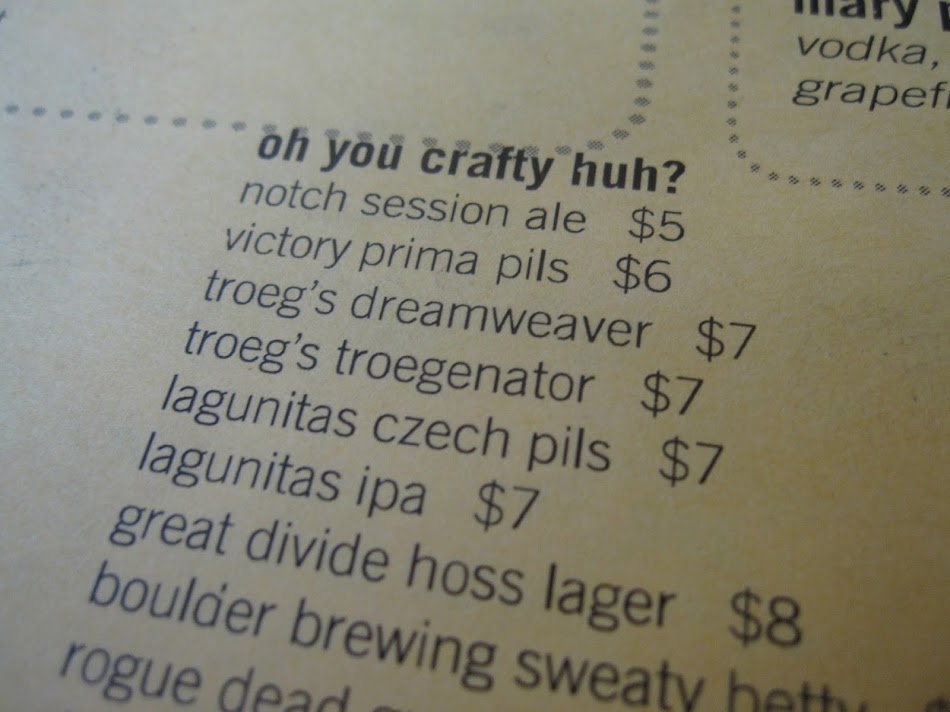 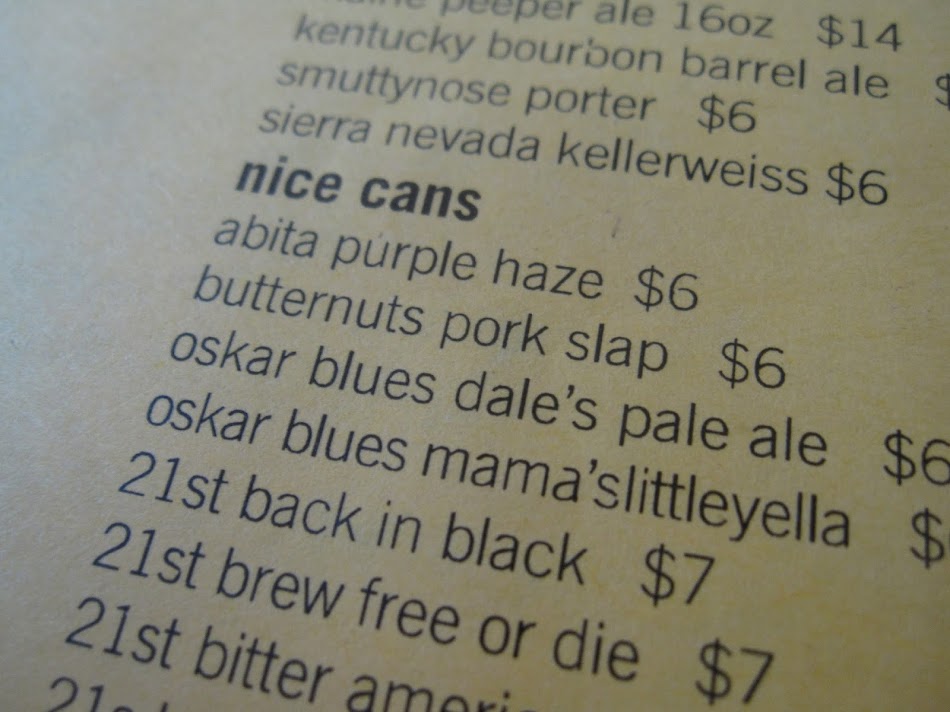 It was an incredibly hot day so I wanted something ice cold and refreshing. I went with the beer-gria, a hybrid beer/sangria concoction. True to the south, it came in a mason jar. 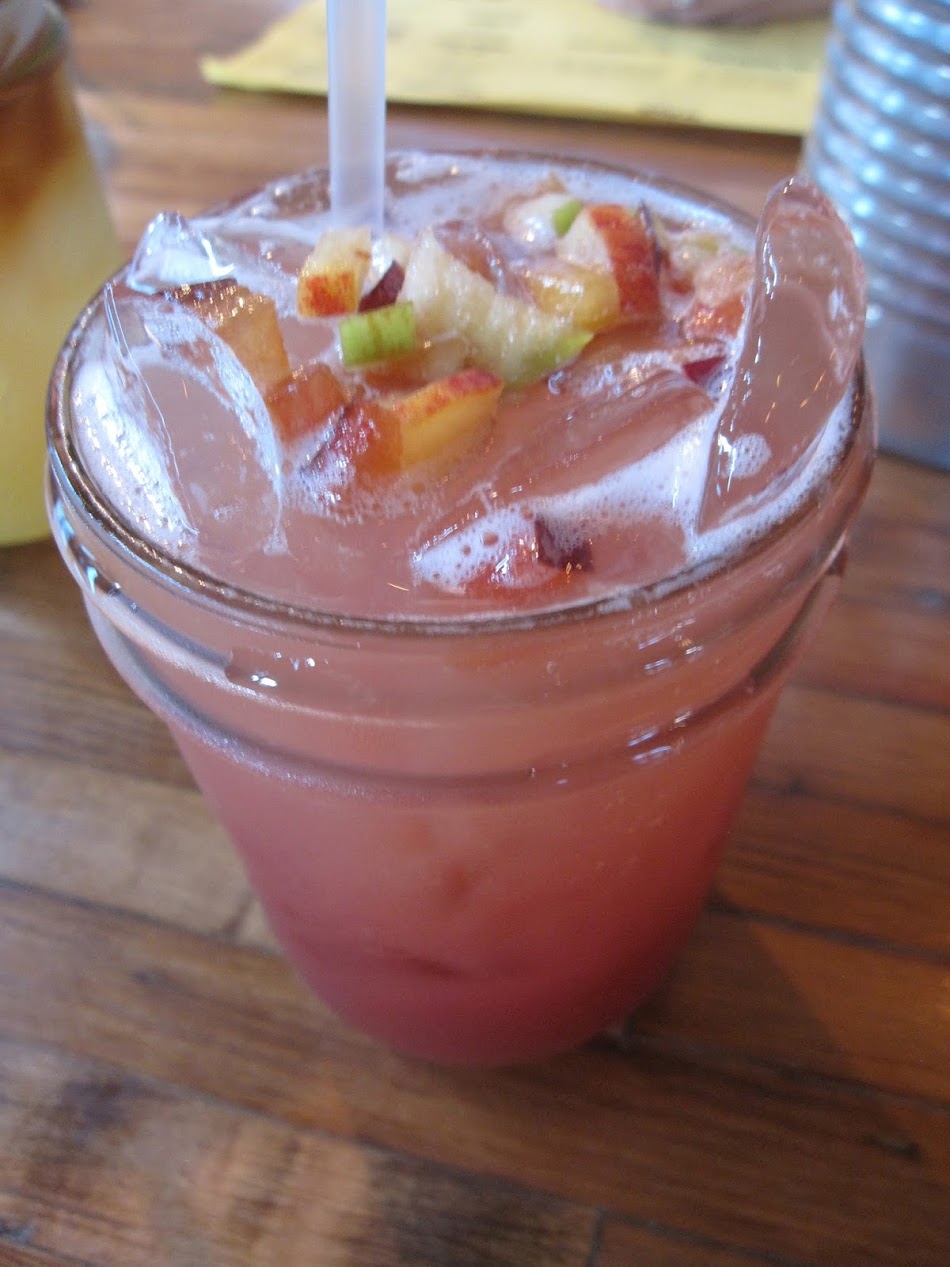 This drink was superb. It had delicious flavor and wasn't overly carbonated from the beer. I enjoyed eating every single piece of booze soaked fruit.

Next to me, a friend ordered the pineapple lush cocktail, also served in a mason jar. She said, "It's not overly sweet, yet I feel like I'm on a tropical vacation with every sip." 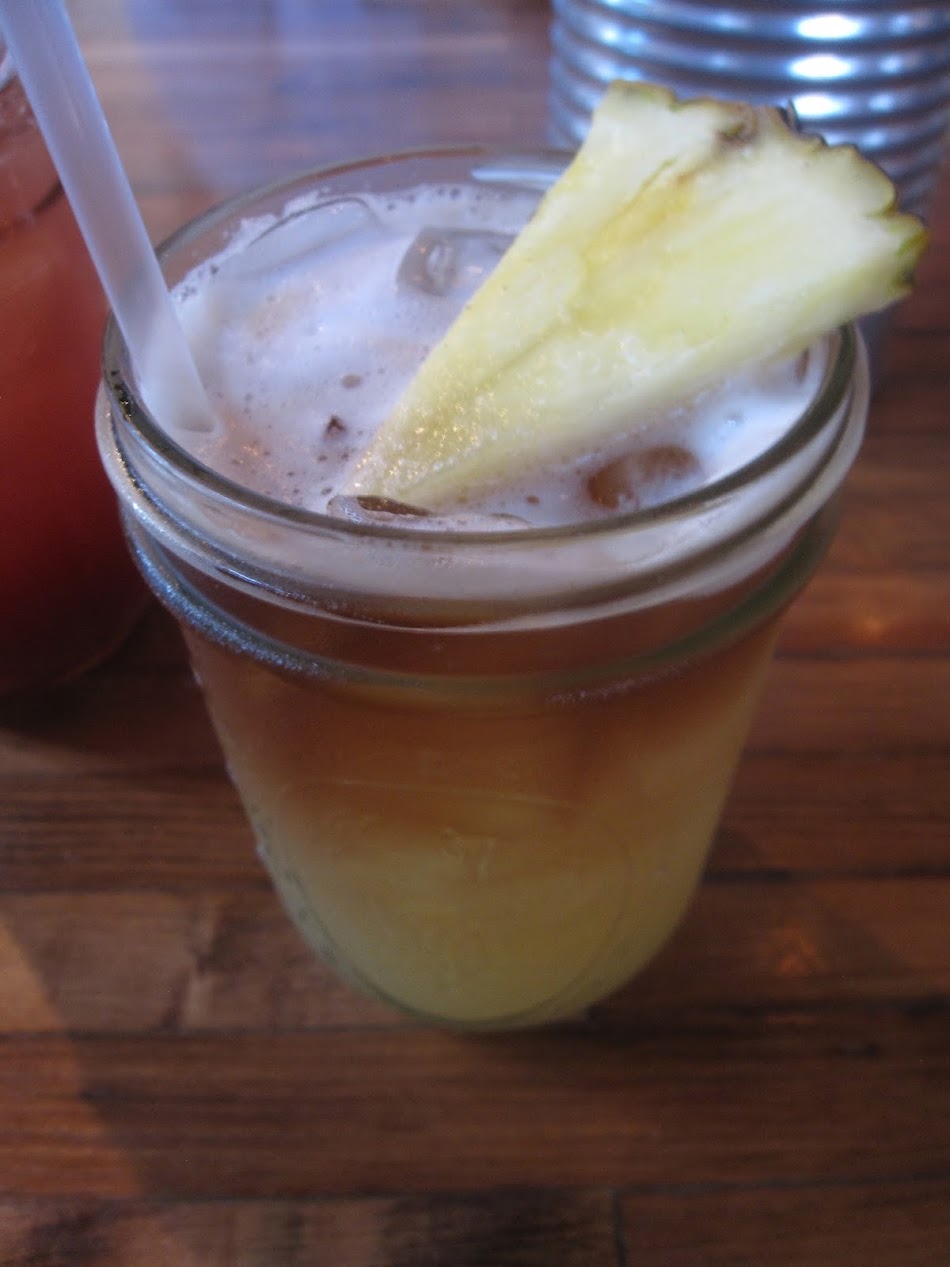 It took as a while to decide what to order, there were so many great choices. If you have a man in your life who loves BBQ meat, you will watch his eyes bug out when he reads this list of choices. 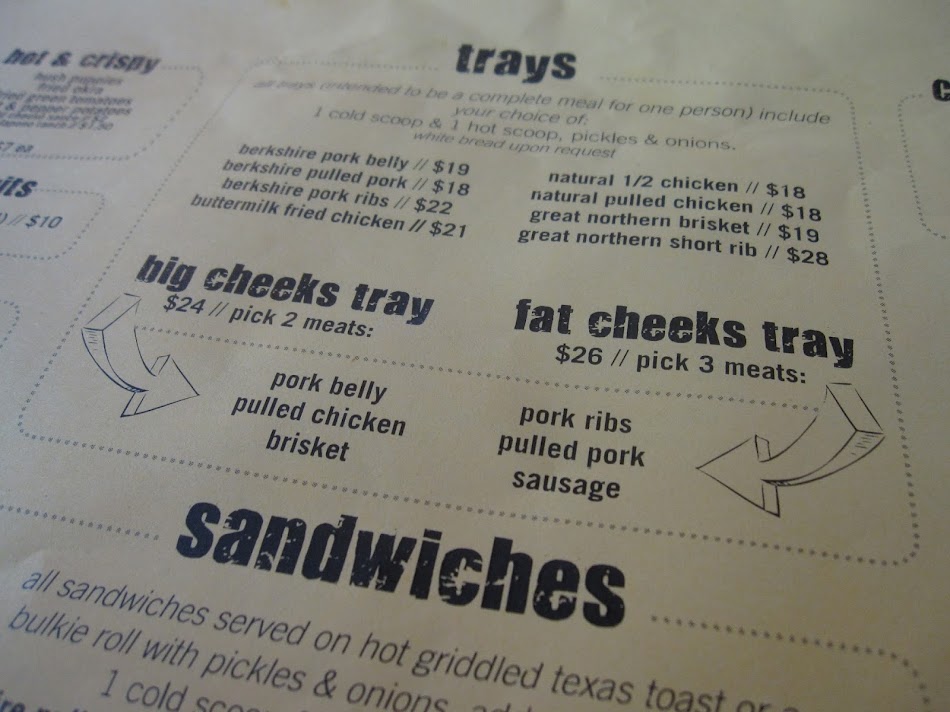 Two of our friends had been before and they recommended we start with the biscuits. Who am I to turn down freshly baked bread?

The biscuits arrived in a paper lined tin can with a small glass jar of butter. 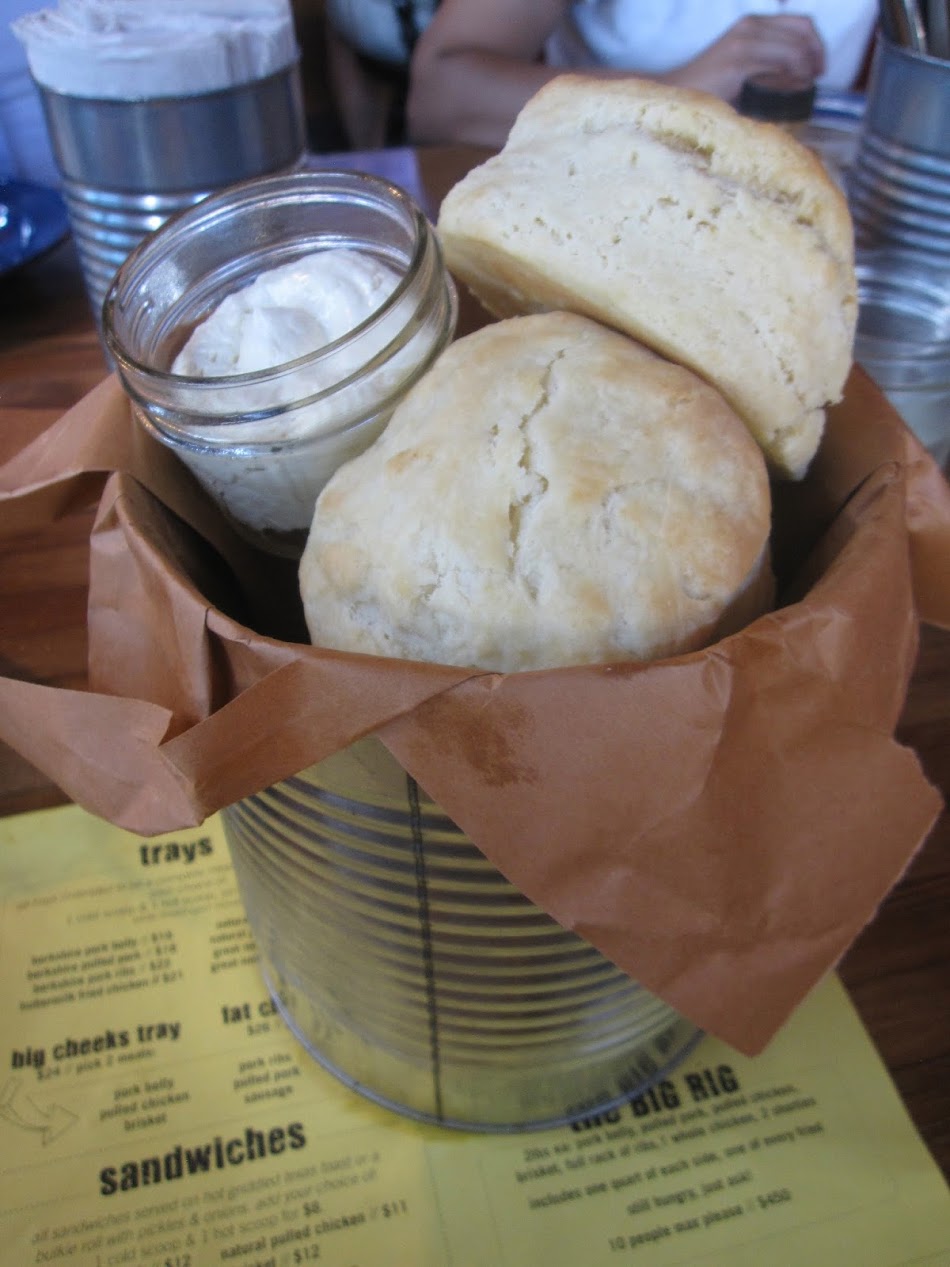 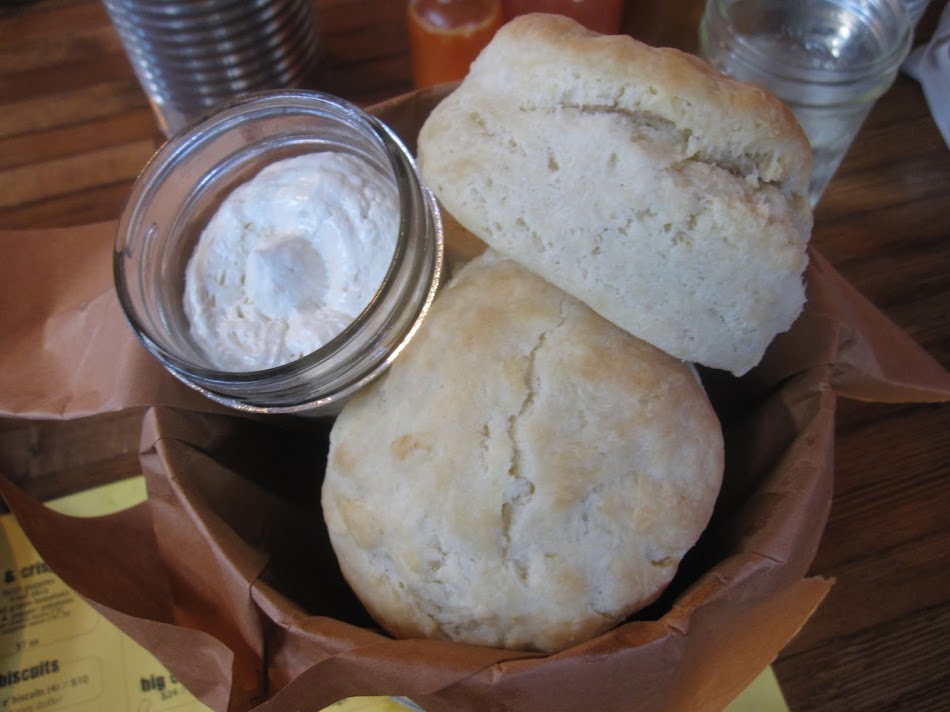 They were warm and easily pulled apart in your hands. Naturally we slathered them with butter. 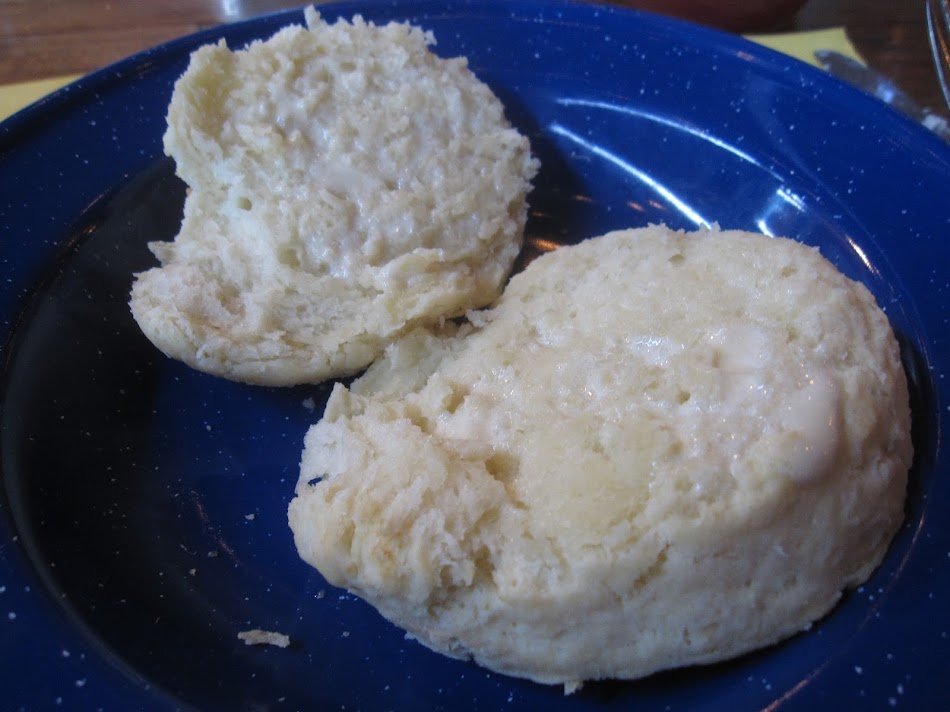 I still think the breakfast biscuits with honey butter at Cafe Luna in Central Square are the best, but these were a valiant contender.

At Sweet Cheeks Q you can basically make your own custom plate, combining BBQ choices with a plethora of side dishes. Next to me, a friend ordered ribs with sides of potato salad and carrot and raisin salad. 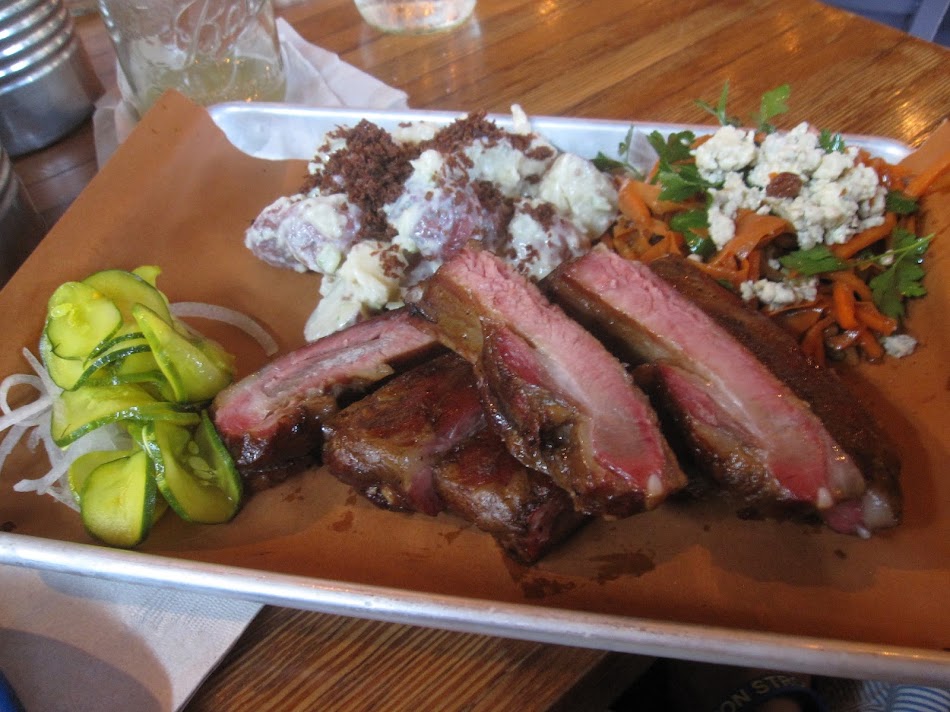 Look at those ribs! 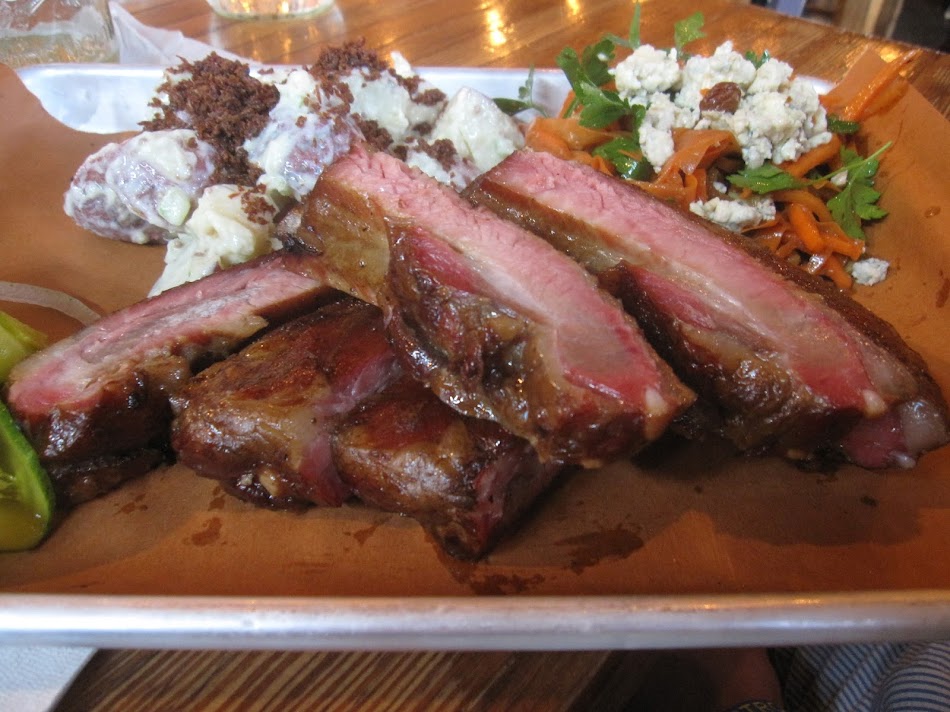 He said, "The ribs came right off the bone. They were great with sauce or plain. I don't know what else to say. I'm speechless. In the best way."

Across the table, two friends decided to share a platter. They went with pulled chicken, the heirloom BBQ beans and the carrot and raisin salad. Unable to skip the ribs, they ordered two individual ribs (Sweet Cheeks Q calls them "onesies") on the side. 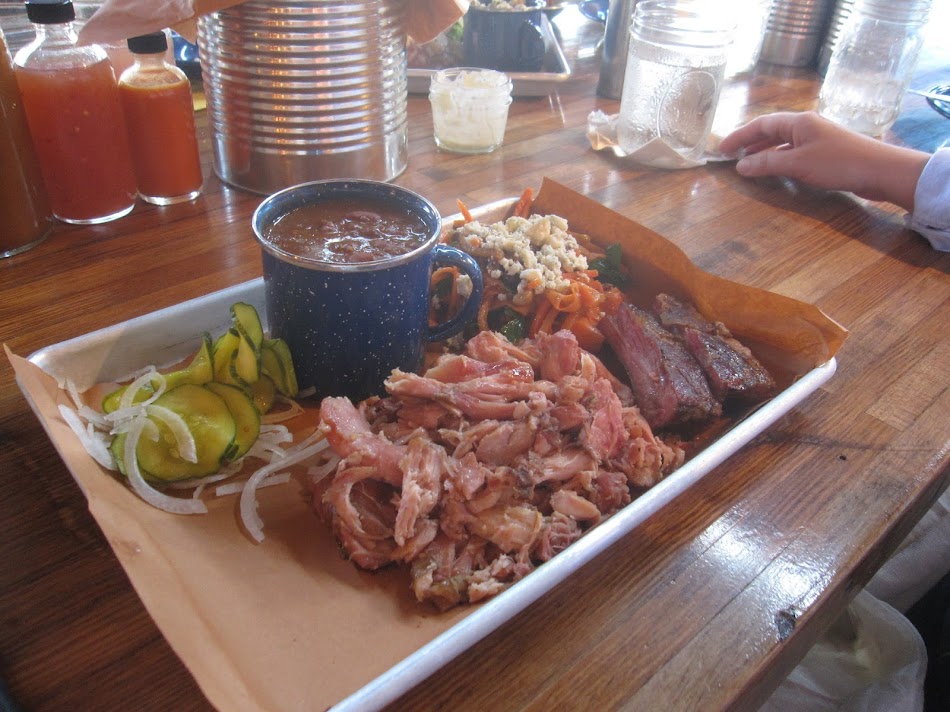 When I asked about the chicken, they shared, "Pulled chicken is usually a cop out for pulled pork, but this chicken was amazing. It tasted best with the house BBQ sauce." They also raved about the beans which they described as, "like a delicious bowl of chili."

Back on our side of the table, I was sharing a smorgasbord of grub with my fellow vegetarian. When we picked this restaurant for our group dinner, everyone was afraid we veggies wouldn't have enough to eat. Honestly, we had the best meal at the table. Hands down.

We started with what Sweet Cheeks Q calls the lunch lady platter. It's basically a plate with four sides. We chose the macaroni and cheese, the broccoli casserole, the potato salad and the farm salad. Both the mac and cheese and the casserole were served in mugs, the type you take on camping trips. 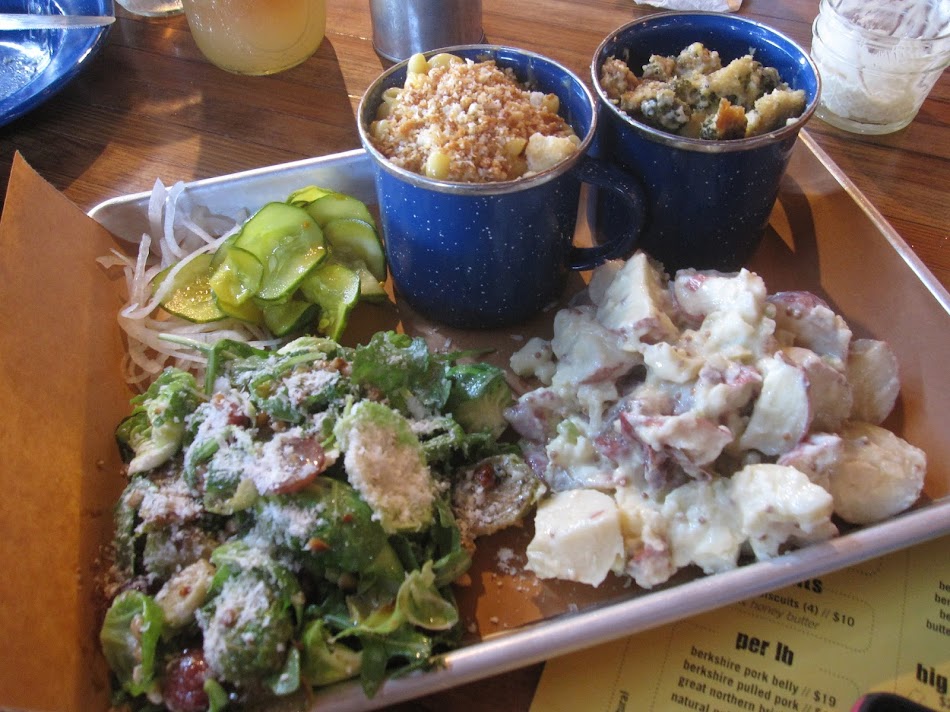 The mac and cheese was disappointing. I was hoping for gooey and creamy, but it was lackluster. Conversely, the broccoli casserole was fantastic! It was so cheesy and rich.

We received a heaping scoop of potato salad which had a tangy mustard sauce. The farm salad, topped with Brussels sprouts, was another favorite. Alongside all the other heavy food, its freshness really stood out.

We also ordered a side of fried green tomatoes. The tomato slices were enormous! These were expertly fried and crisped and made even better when dunked into the spicy dipping sauce. 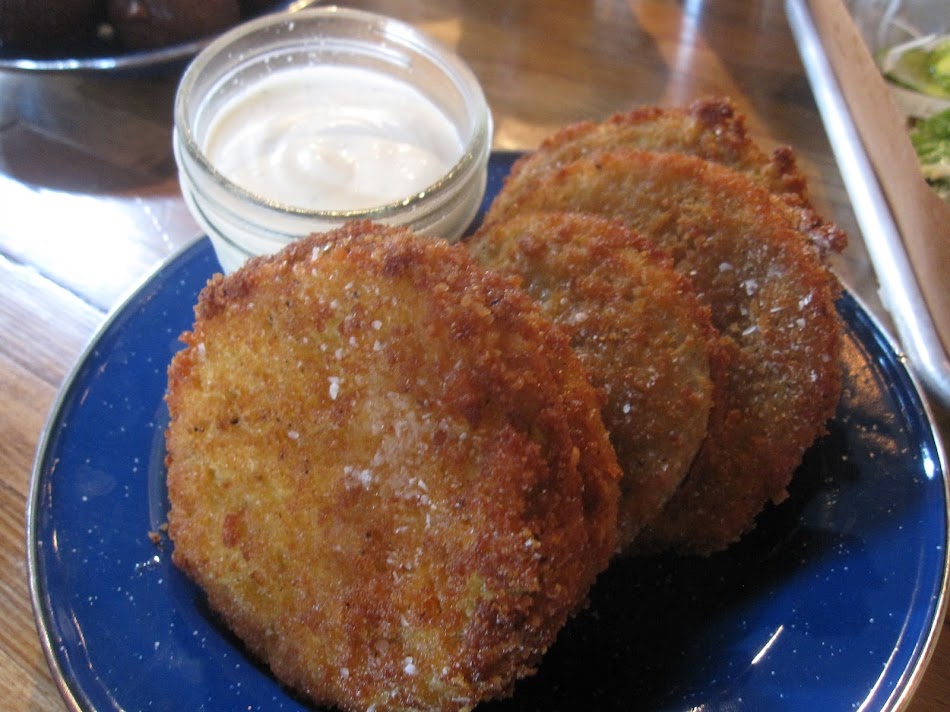 Our last dish was the hush puppies which tasted like fried corn bread. They were served with a maple sour scream. 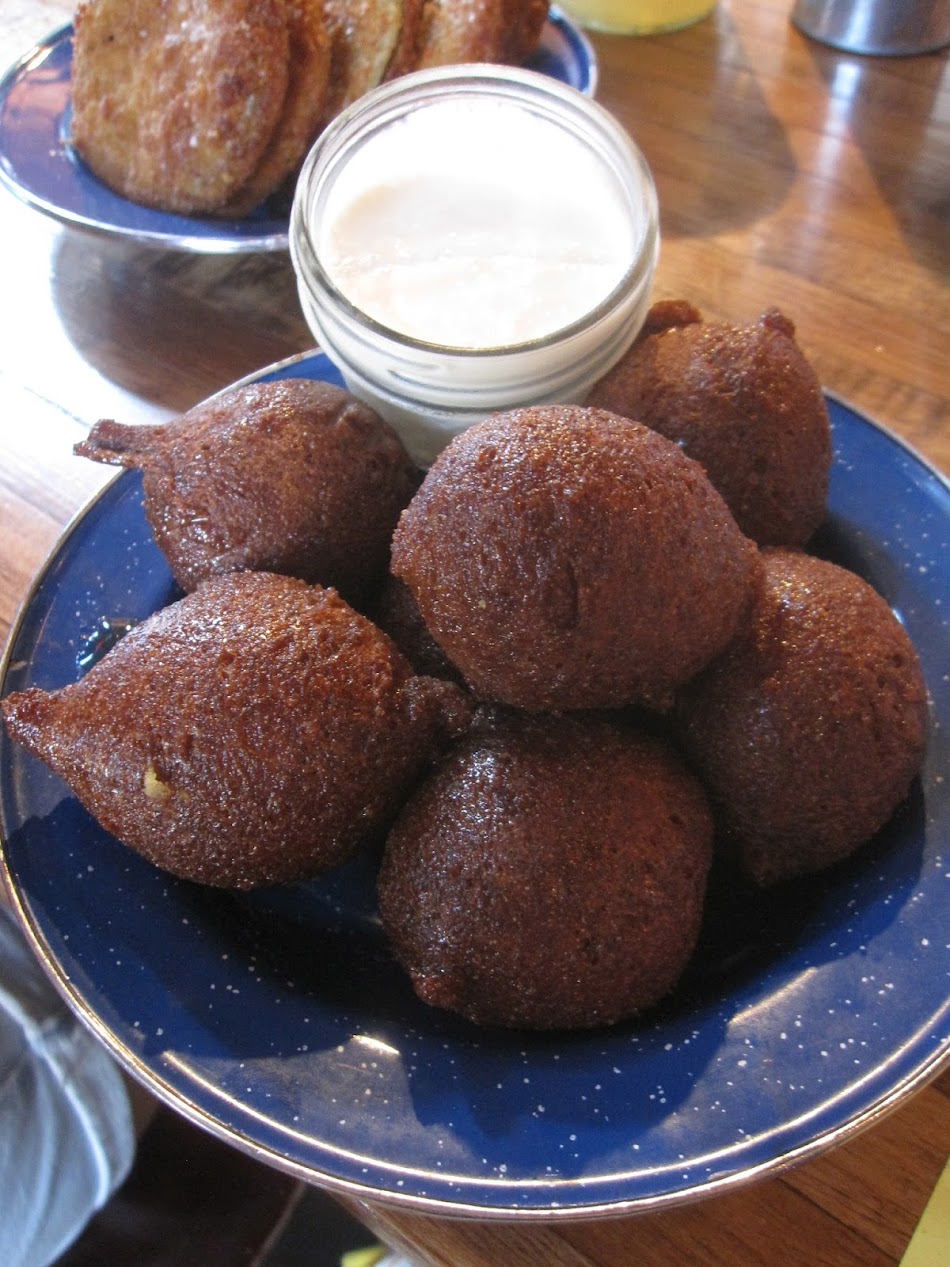 As you can see, we over ordered. Majorly.

Thankfully, our waitress was kind enough to box up each and every side dish for us. She even labeled all the cartons! 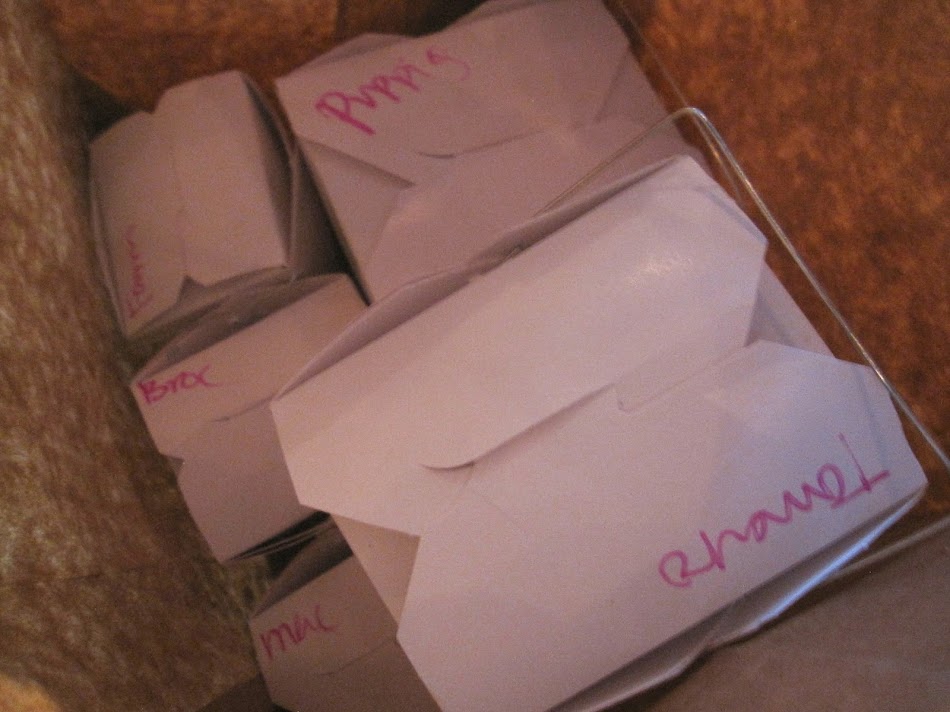 Going into Sweet Cheeks Q for the first time, I wanted to love it. I wanted to love it to support Chef Tiffani and because I'd heard so many great things about the food. In the end, it took zero convincing. The food is exceptional and the menu is surprisingly vegetarian friendly.

If you're looking for a new BBQ joint or just to change up your Red Sox routine, pull up a stool at Sweet Cheeks Q.

Have you ever been? What's your favorite item on the menu?

god, i love this place. i love the biscuits and the mac n cheese. i was lucky enough to meet tiffani and have a drink with her 2 months ago and she is absolutely awesome! i fully support sweet cheeks and any other restaurant she may open in the future (fingers crossed!!!)

Color me jealous! Meeting Tiffani is on my foodie bucket list. I would love if she opened a second place here in Beantown!

I share your love for this place. The biscuits are incred and the carrot raisin slaw still sticks out!

I didn't get to taste the carrot raisin slaw, but will add that to my list for next time. Such a great spot. I love Chef Tiffani's girl power!