Dining Out: The Smith

Two weeks ago during my trip to New York City I had brunch with a group of my oldest and dearest friends. We met at summer camp in 1996. We've been friends for 17 years! Whenever I come to the city it's a blast for all of us to get together and catch up.

For this particular reunion my hostess for the weekend (who had already wowed me at Tommy Lasagna and Mexican Radio) selected a restaurant called The Smith. 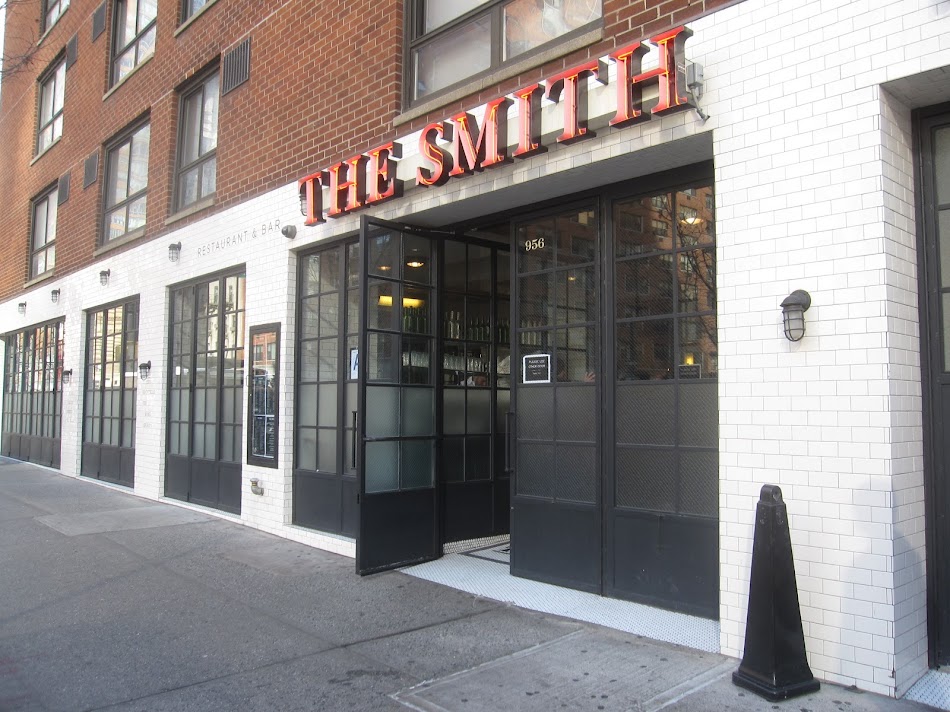 The Smith is located at 51st Street and 2nd Avenue (considered Midtown East), but they also have two additional locations, one in the East Village and one at Lincoln Center.

Our reservation was for 10:30am on Sunday and when we arrived the bar area was completely empty! 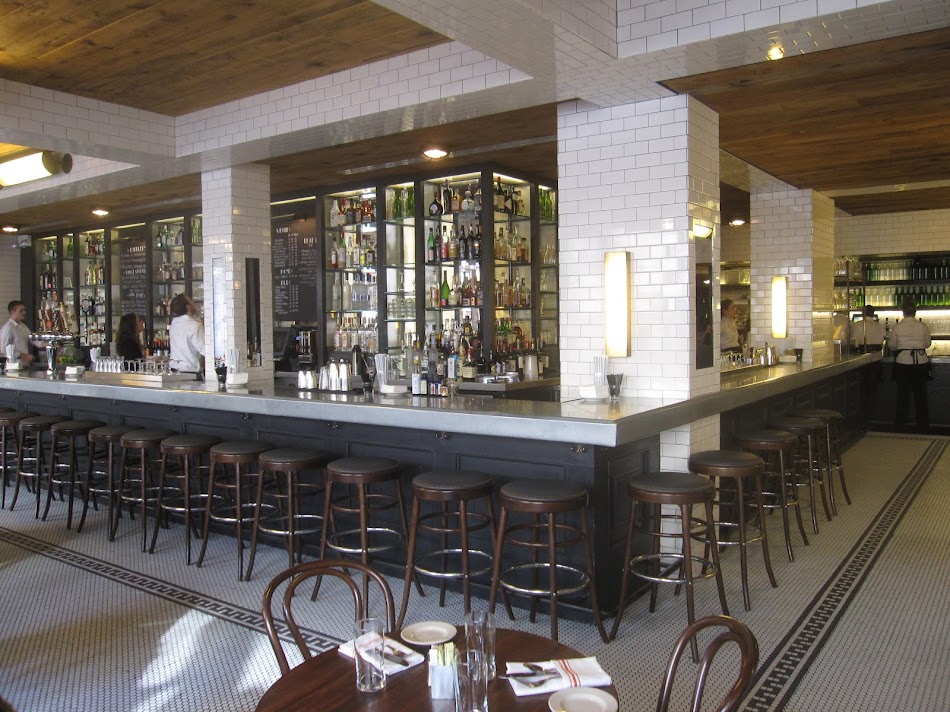 Most of the tables in the dining room were already spoken for and topped with incredible looking dishes. 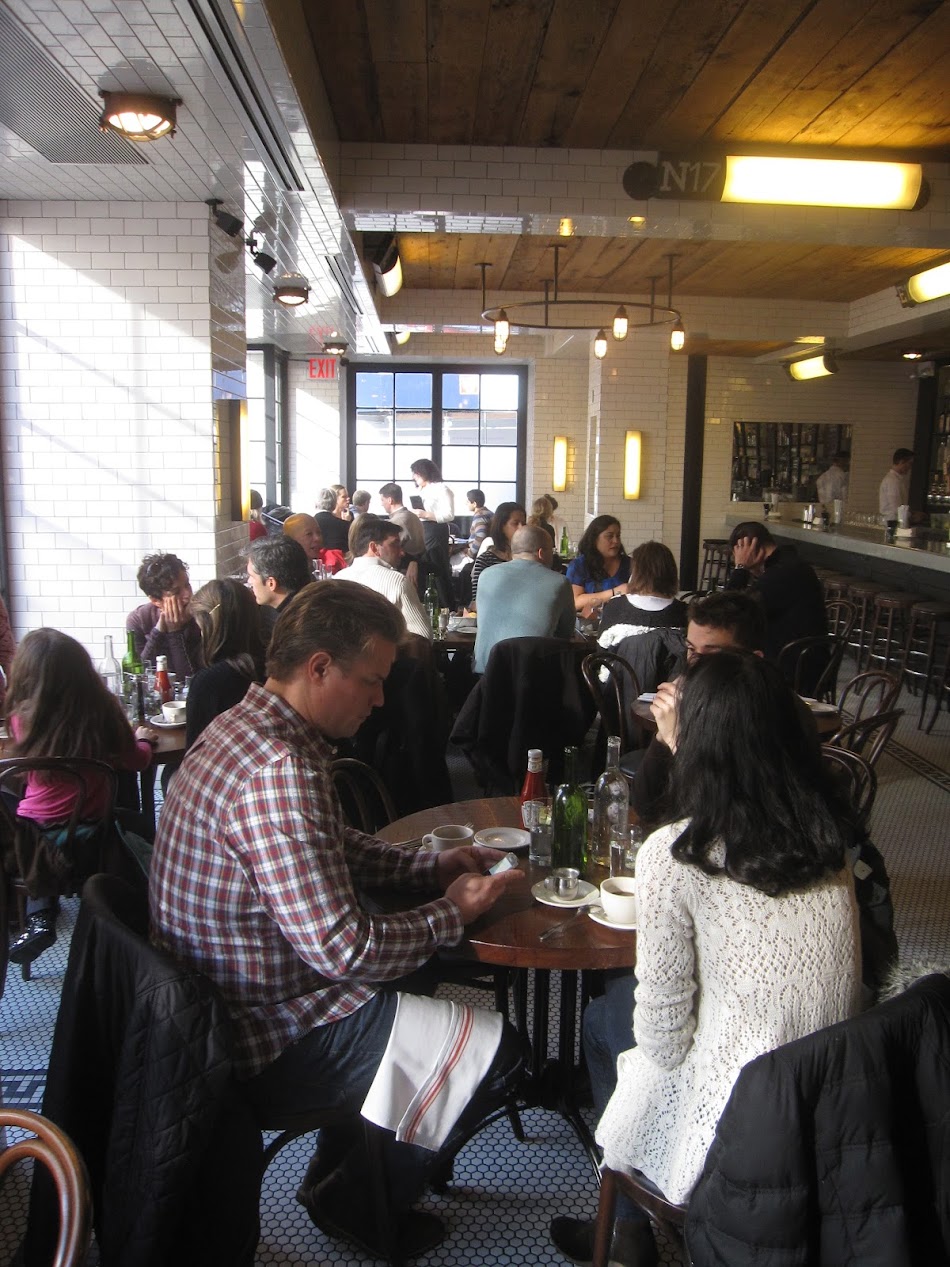 There were seven of us and we were each handed a menu by our waiter. 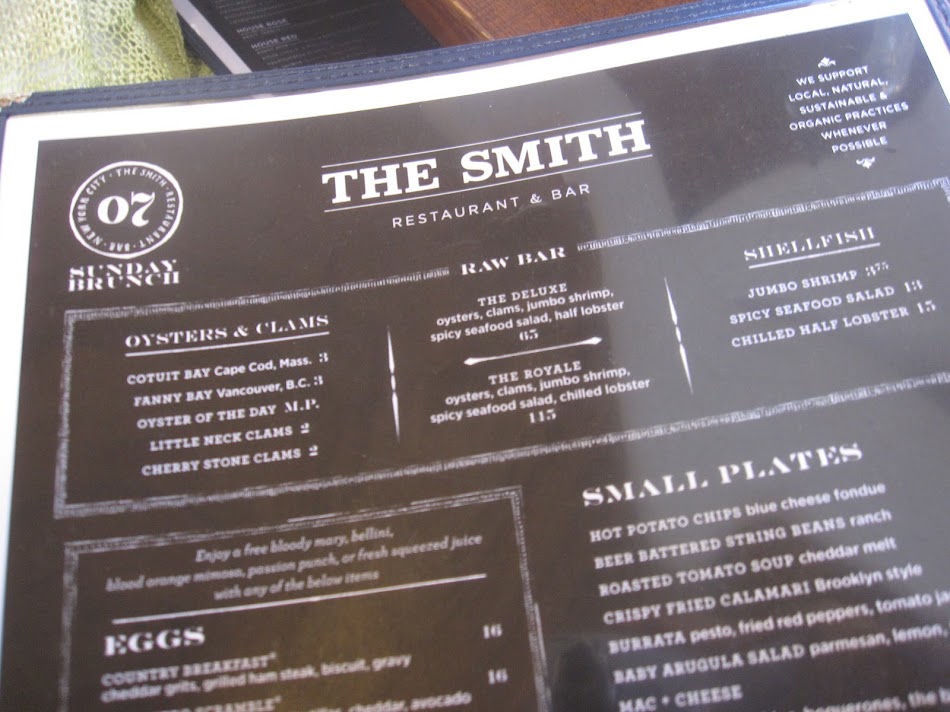 Each table setting included a red and white cloth napkin (I keep seeing these everywhere!) and in between every seat or two there was a loaf of crusty bread in a crinkly white paper bag. 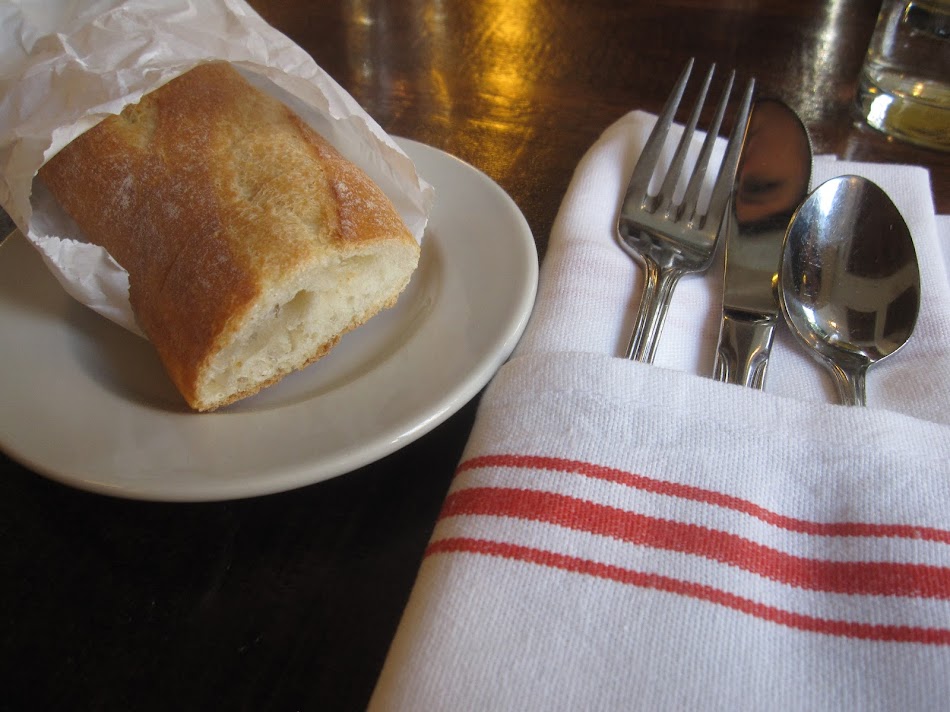 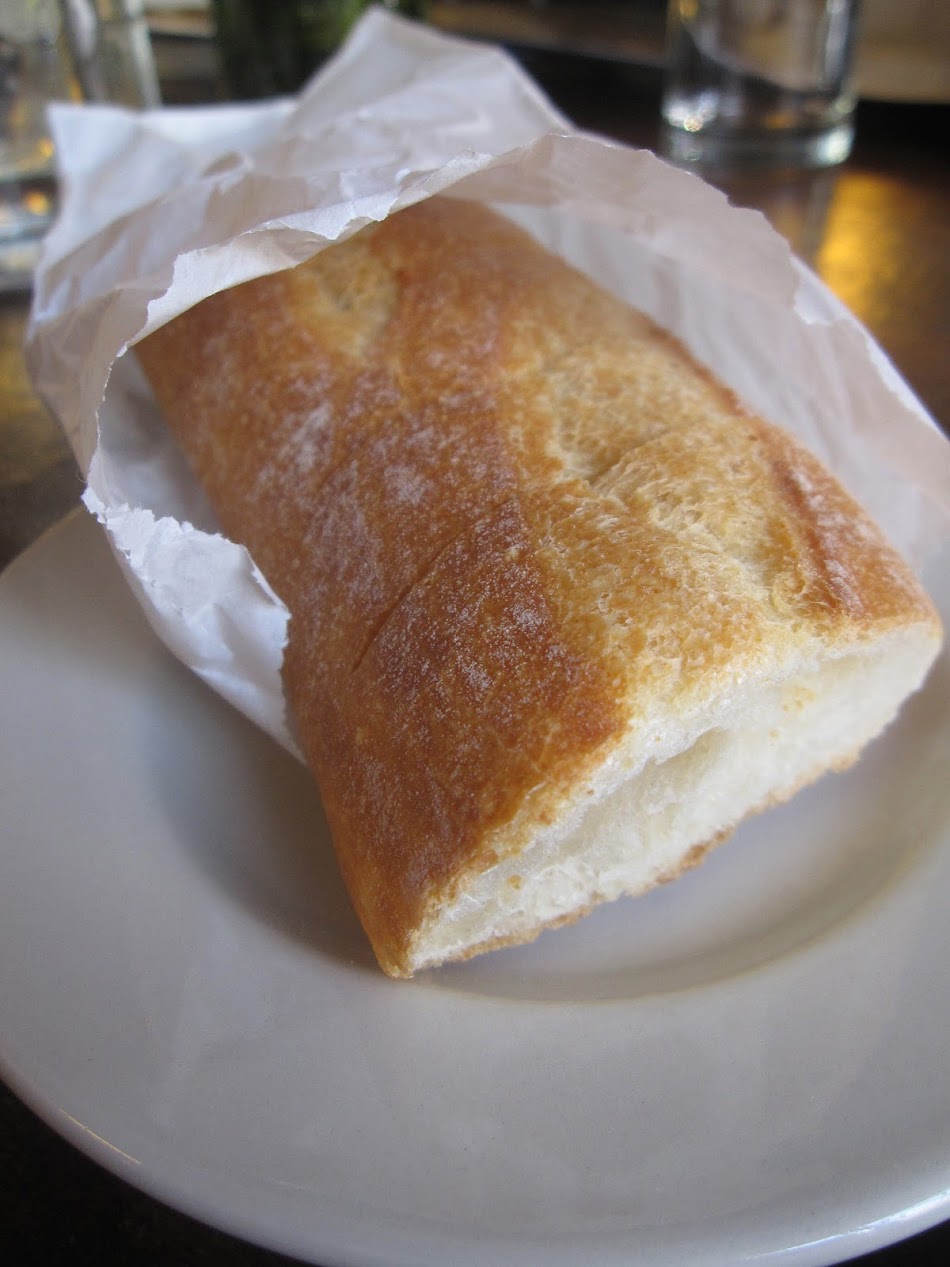 Though I didn't take a picture of this, our waiter placed bottles of both still and sparkling water on the table which we all appreciated.

One of the reasons I love going out to eat in a big group is it's much easier to convince two or three people to get an appetizer than it is to coerce just one person. In this case, we actually decided to order two starters.

Our first dish was the potatoes chips with blue cheese fondue. The chips has just the right amount of crunch and the blue cheese came in two forms, both a hot fondue sauce and fresh and crumbled on top of the dish. 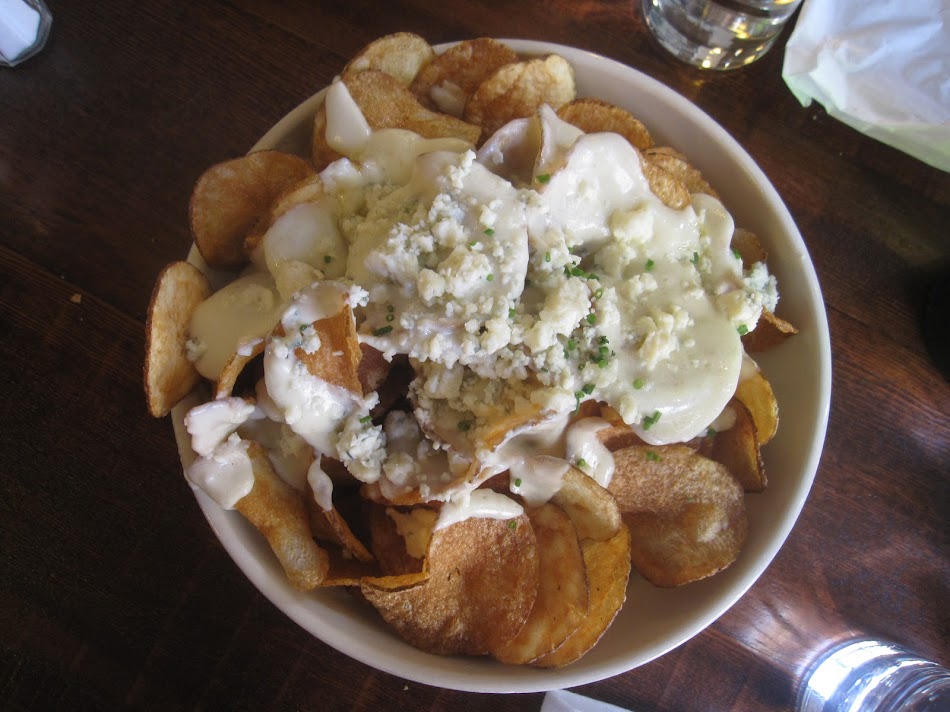 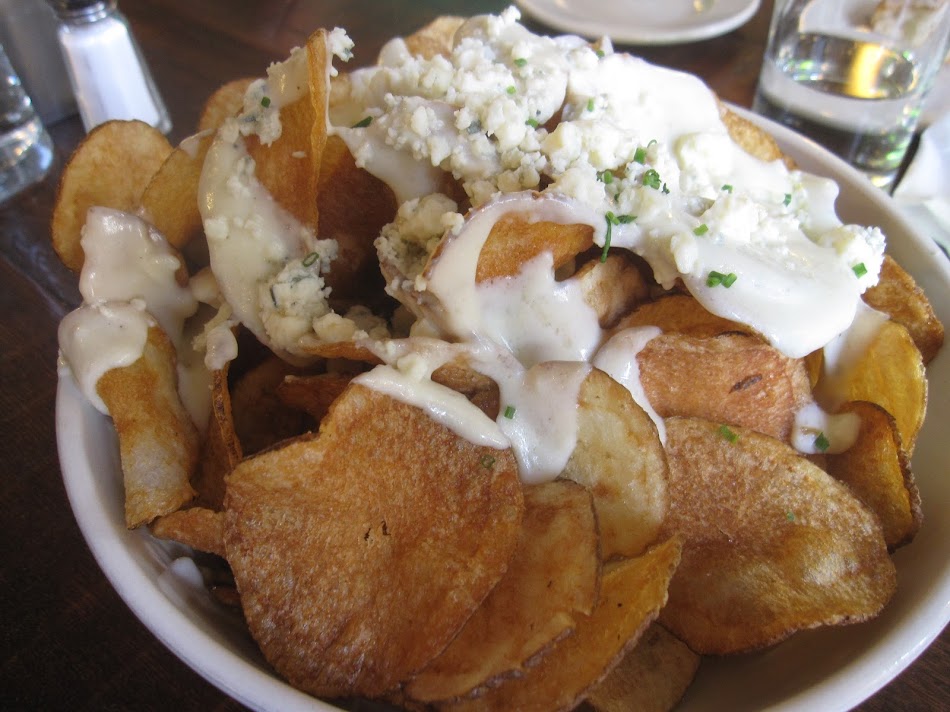 These disappeared very quickly. I was nervous the fondue sauce would drench the chips and make them soggy, but it never did.

We also ordered the beer battered string beans which were served with ranch dressing. I am not sure what I love more, fried vegetables or ranch? 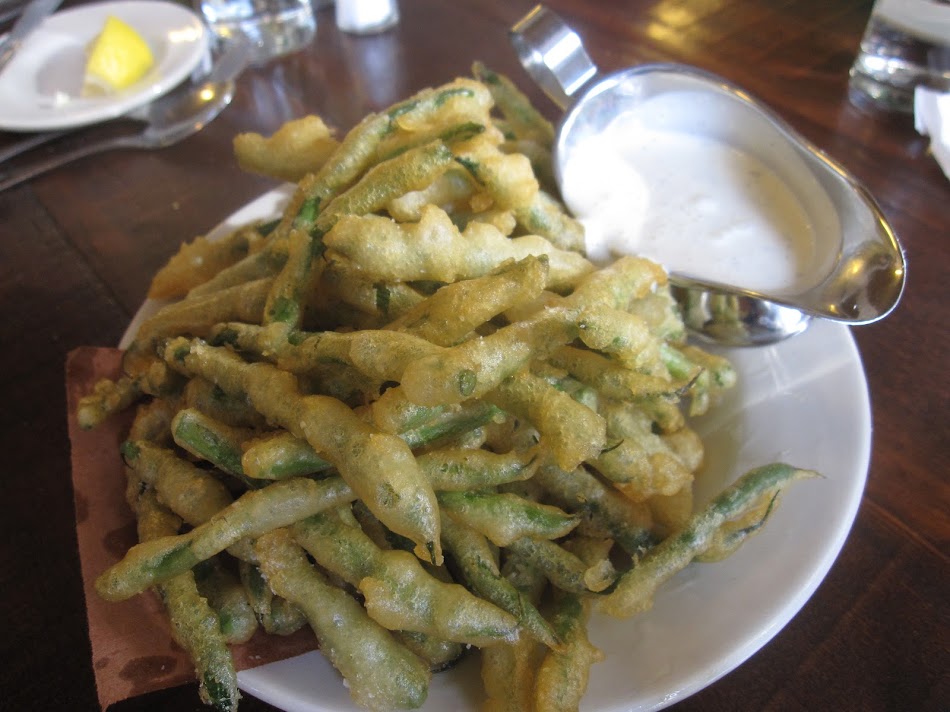 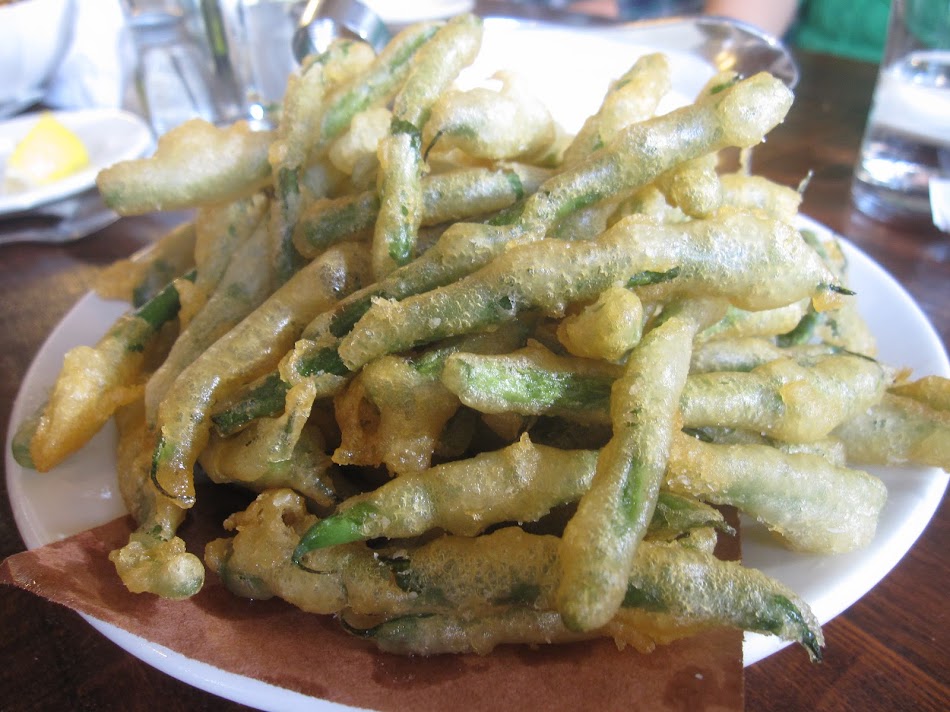 The beans were fried perfectly and accompanied by the cold ranch dressing, they were divine.

Now before I show off everything we ate during the main course, I have to share a hilarious moment. Between the seven of us we had quite a few questions about the menu. One of the items we wanted to know more about was the potato waffle benedict. When we asked, "What exactly is that?" Our waiter replied, "Well, have you ever had a potato latke? You know, like a potato pancake?" Our entire table erupted in laugher. He just asked a group of people who met at Jewish summer camp if they've ever heard of a potato latke. We just about died.

After we composed ourselves, one of my friends did in fact order the potato waffle benedict which was potato latkes topped with poached eggs and a spinach and caramelized onion sauce. How good does that look? 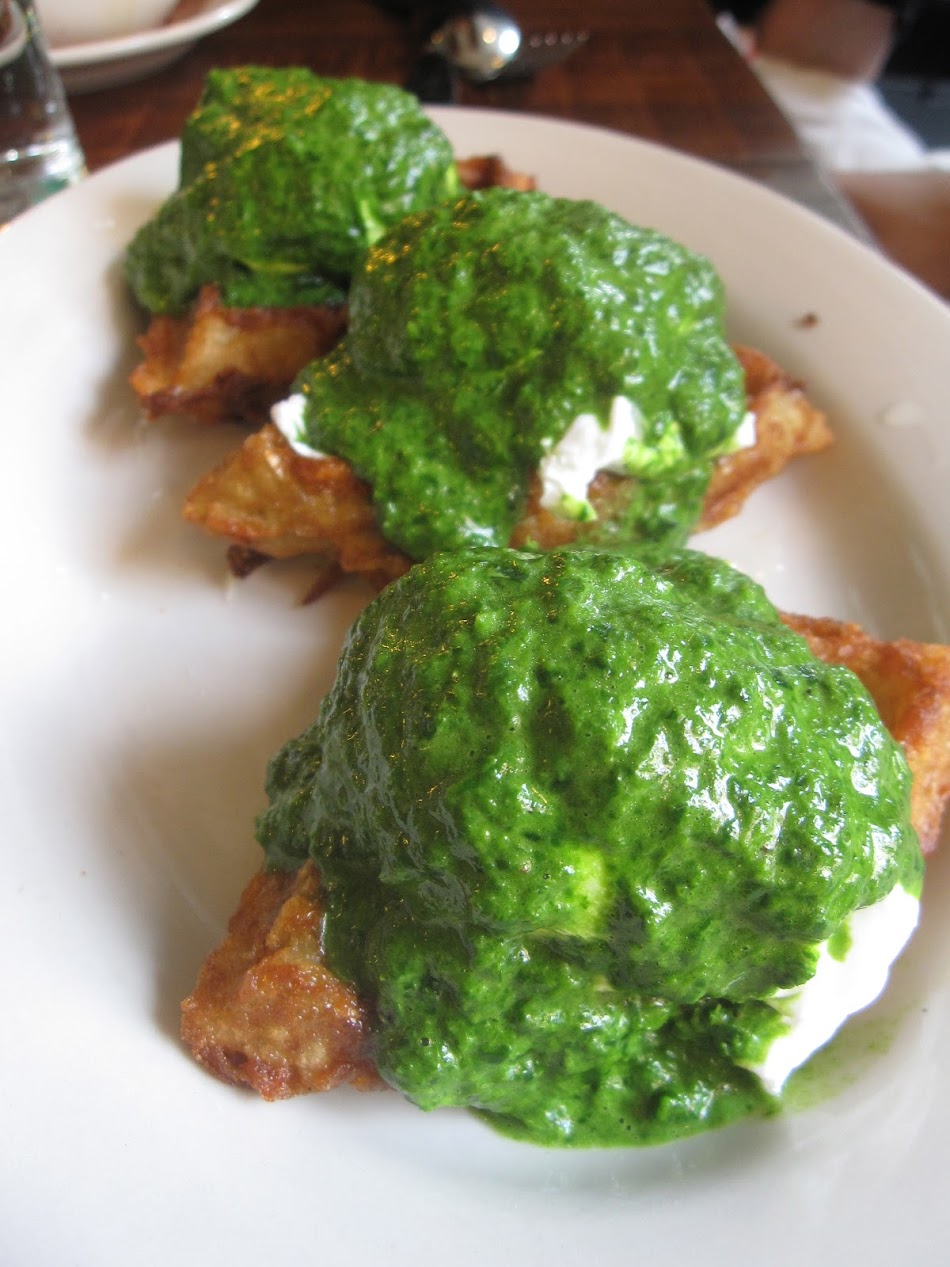 My friend who ordered this said, "It would have been nicer if the potato had been thinner. It made the dish too heavy. Also, overall the dish had a very strong onion taste which was overpowering." He did say that the spinach sauce was excellent with the crusty bread we had on the table.

Next to me, a friend ordered the smoked salmon benedict. She asked for the dish with the eggs poached hard and the hollandaise sauce on the side. The Smith happily accommodated both of those requests. 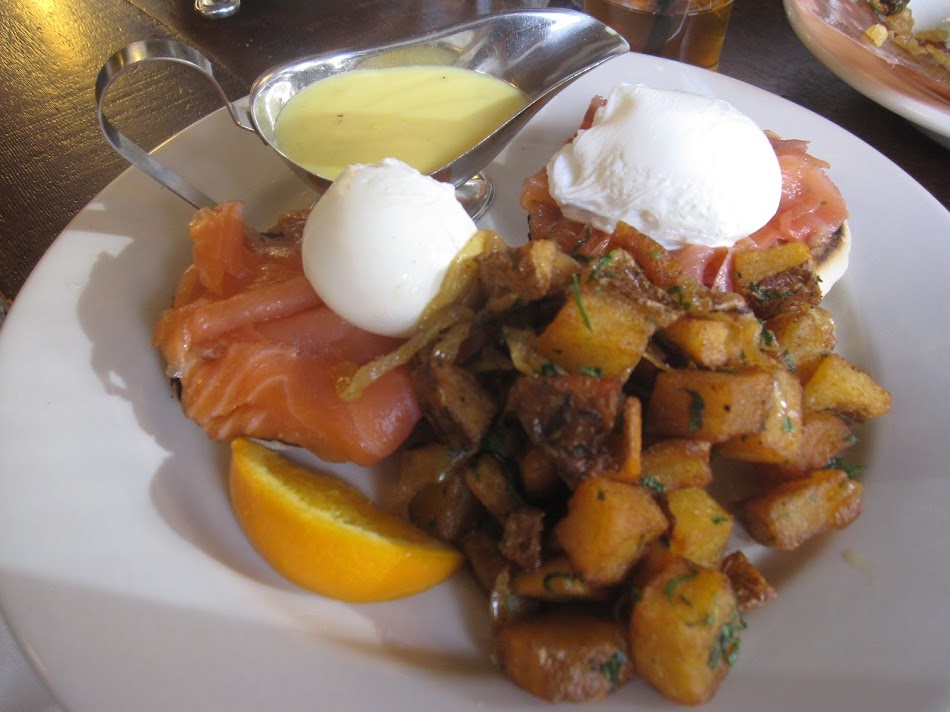 After a few bites she marveled, "I can't believe how much fish there is! This is such a generous portion."

Only one friend decided to order something sweet and selected the pancakes. The stack came topped with apples, walnuts and white rum caramel. He raved, "These are light, fluffy, cakey goodness. I love the whole walnuts. It does need a little extra syrup to coat the whole stack." 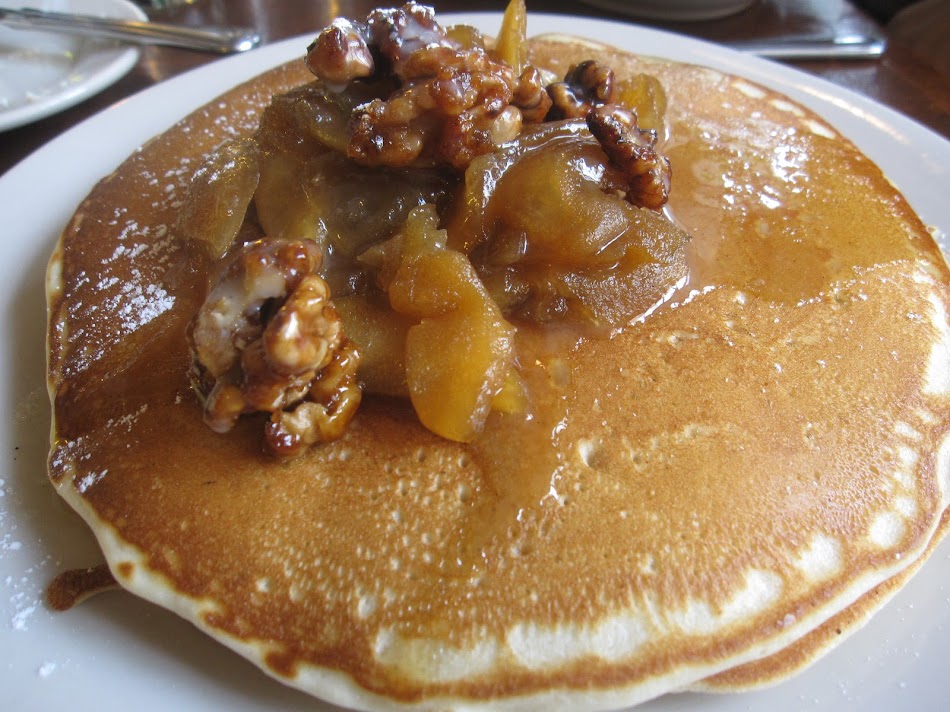 When his fiance took a bite from his plate, she looked at me and said, "These are just so . . . " and then she kissed the air like an Italian grandma. There you have it!

I decided on a simple dish, the mushroom omelette with fresh herbs and fontina cheese. This omelette was massive! I had to give up half way through. The omelette was packed with delicious 'shrooms and the home fries on the side were excellent. 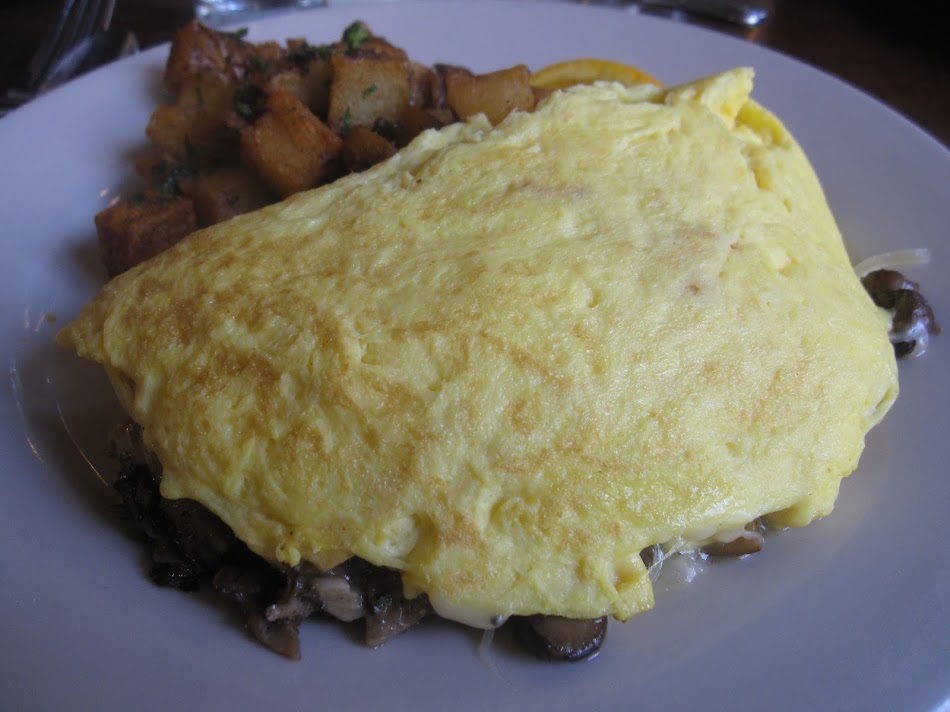 Across from me, a friend chose to have the roasted tomato soup. The Smith prepares their tomato soup like a French onion soup, baking it with cheese on top. Yum! 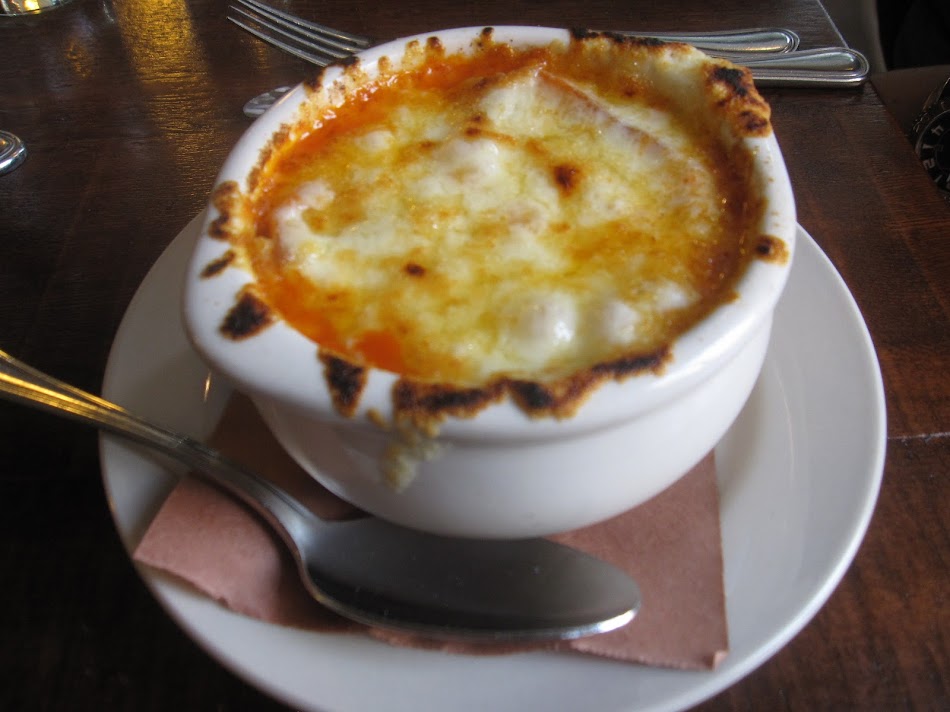 She praised the dish saying, "Seriously, this is one of the best things I have ever eaten." She wanted everyone to take a spoonful.

Her husband ordered a cheddar biscuit on the side and I had one small bite. I have to say, the biscuit was disappointing. Not enough cheddar taste. 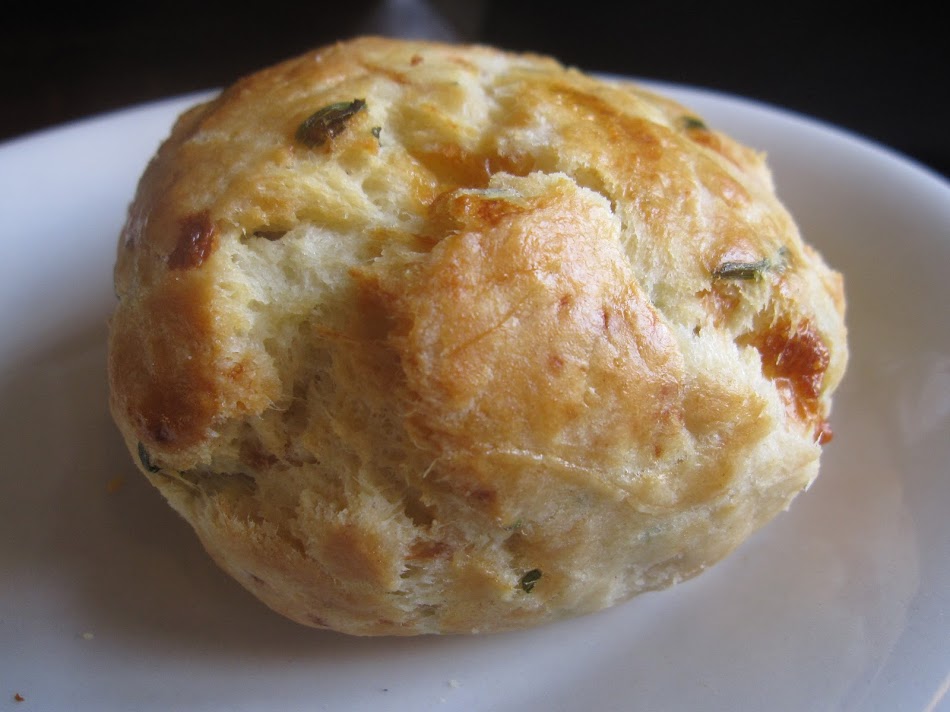 You may notice there aren't any brunch cocktails in these photographs. Not a single mimosa or bellini to been found. Well, that is because The Smith cannot begin serving alcohol until 12:00pm on Sunday. Had it been after 12:00pm, every one of our brunch dishes would have come with a complimentary cocktail.

Before leaving I headed downstairs to use the ladies room, but to my surprise it turned out to be a unisex bathroom! I went to a college that only had unisex bathrooms so it's not like I can't handle it, but I was very surprised. The bathroom at The Smith also has a photo booth and a shoe shine guy, elevating the potential for awkward encounters.

Overall, our experience at The Smith was an excellent one. We had a nice, roomy table. We never had to ask for water. Our appetizers were out of this world and we were all impressed by our entrees. We're all still laughing about the, "Have you ever had a potato latke?" question. I'm pretty sure that became an immediate inside joke for life.

I LOVE The Smith! Have been here multiple times, and it's such a great go-to place. I was actually just here for my birthday brunch on Sunday and the place was empty due to the no-booze-before-noon-on-sunday rule. I sure didn't mind having the place to myself AND I had the omelet you had -- Glad you had such a good experience :)

The first time I went to Dos Caminos was my senior year of college. One of my high school friends was a theater major at NYU and he was starring in their production of "Into the Woods." After the show we went to Dos Caminos to celebrate his stellar performance. This was before the blog existed (gasp!) so when I re-visited the restaurant last week with my co-workers, I wanted to be sure to capture it.

You may remember that back in January while on a work trip to New York City I went to Serendipity. So naturally when I was planning my trip to Las Vegas, I felt I had to visit Serendipity there, you know, just to compare. For research purposes.