Though not a whole lot happened on Grey's Anatomy tonight, I found myself really engrossed and invested in this episode.

Let's start with Dr. Kepner. I absolutely loved her lowering her voice to command more respect from her fellow residents and I give her a standing ovation for her speech at Joe's bar. That's right, girl! You tell 'em! 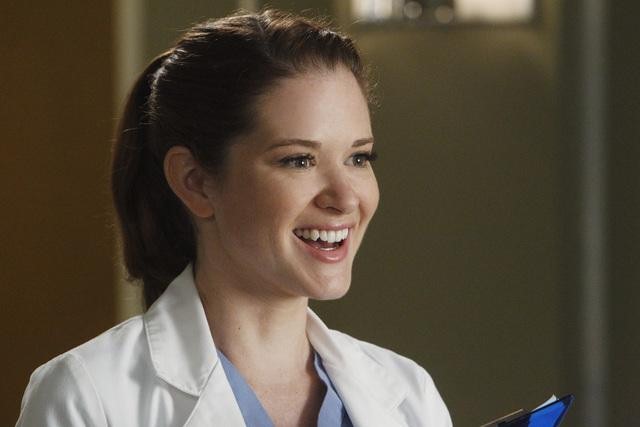 I laughed when Meredith used the same stern tone of voice with Dr. Bailey to convince her to really read Meredith's trial research. I am not sure why, but Dr. Bailey seems to be the only person who hasn't forgiven Meredith for tampering with Derek's trial. I think there is something more going on there and I'd really like to know what the actual root of the problem is.

This episode Meredith is working in the OB/GYN department. Apparently those doctors wear pink scrubs instead of the blue scrubs the general surgeons wear. I loved when Cristina said to her, "wearing the vagina squad scrubs in public is . . . it's . . . we have standards Meredith!"

I liked the dynamic this week between Meredith and Lexi as Meredith tried to stay out of Derek's way and Lexi tried to please him. Best line, Lexi to Mer, "So what, now you're using me? I'm your tumor mule?"

Speaking of the brain tumor story line, how heart wrenching was that? When Derek walked out of surgery and towards the husband I could have sworn he was going to say she didn't make it. I was physically bracing myself against a throw pillow.

On a lighter note, it was fun to watch the Dr. Webber sneak around and try to get information about the trial. Equally funny was Owen and Cristina's racy texts. Of course it's sad they can't have an actual conversation, but hey, I'll take the fooling around. Or headstands, as the case may be.

A "bravo" to Callie for her rant at the end of the hour! When she imitated Mark talking about his foodie triumphs I laughed out loud. Great writing. 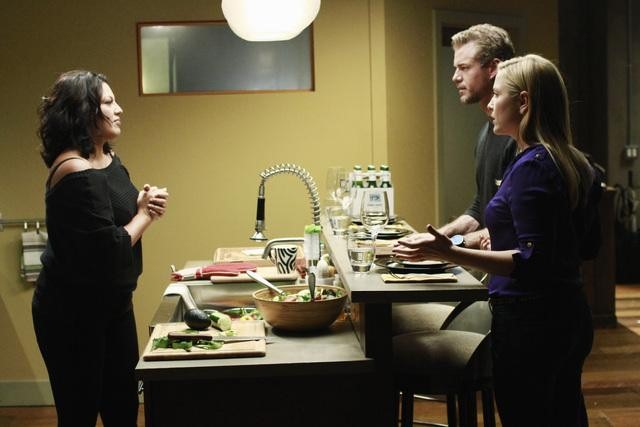 Before we adjourn, can I just ask, when is Alex going to have a single redeeming moment? Just one moment of humanity? It's time.

In previews for next week it seems the whole hour is centered around the word "risk." It also seems Meredith and Dr. Bailey are going to have a brawl. Bring it on!

You can also expect to see two new faces in coming episodes. According to TV Guide, True Blood actress Vedette Lim is going to join the cast as a rival for Alex and according to TV Line, Holley Fain, most recently seen on Gossip Girl, is going to arrive as a new love interest for Mark. Can't wait!

this was definitely a funny episode; low voices, racy texts and all!

I am continually amazed by the amount of information available on this subject. What you presented was well researched and well worded in order to get your stand on this across to all your readers. frisco texas locksmith services

This is a power tool to create speeches from the text with awesome natural voices using Advanced Artificial intelligence techniques. It's cheaper than Speechelo and better than NaturalReader. text to speech to wav

A Major Learner EFL Learner Obstacle: If you want to hear English language teachers and learners alike moan in unison, just ask them about teaching, learning or using prepositions in English. Prepositions in English are a major English language teacher and EFL learner obstacle world wide. Why? It's because of the complexities of use prepositions have in English, not only in idioms and expressions, by in simple, everyday usage forms as well. Here are some starter ideas I use. English Grammar

This is my first time i visit here and I found so many interesting stuff in your blog especially it's discussion, thank you. white label SEO

Thanks For sharing this Superb article.I use this Article to show my assignment in college.it is useful For me Great Work. Cash offer for my house Chicago

Thanks for sharing us. loans in colorado

I recently found many useful information in your website especially this blog page. Among the lots of comments on your articles. Thanks for sharing. Gunn

Thanks you very much for sharing these links. Will definitely check this out.. facial spas fort pierce

I like this post,And I guess that they having fun to read this post,they shall take a good site to make a information,thanks for sharing it to me. physical therapy in queens ny

Hi! Thanks for the great information you havr provided! You have touched on crucuial points! Dog training Houston TX

I appreciated your work very thanks Authentication of Documents Canada

thanks this is good blog. digital direct

I just couldn't leave your website before telling you that I truly enjoyed the top quality info you present to your visitors? Will be back again frequently to check up on new posts. accredited

Thanks for posting this info. I just want to let you know that I just check out your site and I find it very interesting and informative. I can't wait to read lots of your posts. drive

I am very happy to discover your post as it will become on top in my collection of favorite blogs to visit. IV cocktail

I know your expertise on this. I must say we should have an online discussion on this. Writing only comments will close the discussion straight away! And will restrict the benefits from this information. VCLUB CC SHOP

I haven’t any word to appreciate this post.....Really i am impressed from this post....the person who create this post it was a great human..thanks for shared this with us. zeemedicalbilling.com

I am happy to find your distinguished way of writing the post. Now you make it easy for me to understand and implement the concept. Thank you for the post. Slot Nova88

Your website is really cool and this is a great inspiring article. Thank you so much. Poker QQ

i really like this article please keep it up. qqpokeronline

I recently came across your blog and have been reading along. I thought I would leave my first comment. I don't know what to say except that I have enjoyed reading. Nice blog. I will keep visiting this blog very often. white label seo reseller plans

What a fantabulous post this has been. Never seen this kind of useful post. I am grateful to you and expect more number of posts like these. Thank you very much. white labeled seo reseller services

An interesting dialogue is price comment. I feel that it is best to write more on this matter, it may not be a taboo topic however usually individuals are not enough to talk on such topics. To the next. Cheers. camloo

Great Article it its really informative and innovative keep us posted with new updates. its was really valuable. thanks a lot. managed seo

It proved to be Very helpful to me and I am sure to all the commentators here! crypto nation pro

Only aspire to mention ones content can be as incredible. This clarity with your post is superb and that i may think you’re a guru for this issue. High-quality along with your concur permit me to to seize your current give to keep modified by using approaching blog post. Thanks a lot hundreds of along with you should go on the pleasurable get the job done. yahoomail login

Some truly wonderful work on behalf of the owner of this internet site , perfectly great articles . Dikmen lavabo tıkanıklığı açma

END_OF_DOCUMENT_TOKEN_TO_BE_REPLACED

After a brutal two week hiatus, 90210 returned tonight with a special treat for the ladies -

The Mindy Project: A Case Of Mindy Fever

Last night's episode of "The Mindy Project" featured theatrics, fake accents and a black sheep sweatshirt. The episode begins with the doctors arriving to the hospital to meet their new boss, Dr. Jean Fishman, formerly of Mass General. I love the way Mindy constantly works nods to Boston into her scripts. In the middle of Dr. Fishman's presentation, Mindy's phone starts to go off. Naturally her ring tone is Iggy Azalea's "Fancy."

This week's episode of Grey's Anatomy opens with chaos at Casa