Read: The Blind Side 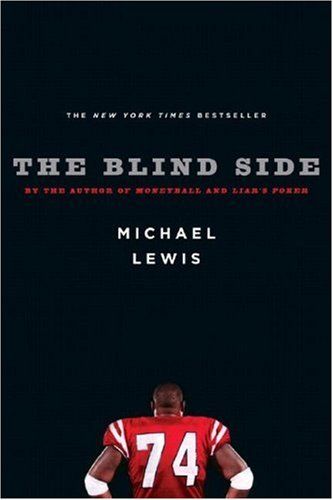 During the spring semester of my junior in college I studied abroad in Cordoba, Spain. I lived in a dorm that had one television in the common room and my fellow Americans and I could never seem to get control of the remote from our Spanish dorm-mates. After about a week we gave up and turned to reading. We swapped books almost every other day. We eventually ran out of new material and wound up having our parents ship us more and bring back ups when they came to visit.

One of my fellow travelers shared my same taste in books and about two years ago she recommended that I pick up "The Blind Side" by Michael Lewis, the same author who wrote another one of her favorite sports books "Moneyball" (which I also picked up at her recommendation, but have yet to read). So I did go get "The Blind Side" but wound up shelving it.

Then I saw a preview for "The Blind Side" the movie! I realized it was the same story as the book she recommended and I frantically finished the book I had been reading so I could get cracking before the movie release date.

"The Blind Side" is 40% the story of Michael Oher (which you see in the movie previews) and 60% football theory. Michael's life story is used as a human example of the newly focused attention on the position of left tackle on professional football teams.

The author Michael Lewis spends a great deal of time explaining how the position of left tackle on an offense has become highly valued and critical to the success of a professional football team. He spoke to players, coaches, agents, scouts and sports historians to give a detailed evolution of the game of football and how the focus has shifted over time in terms of a running game versus a passing game, and giving the most cash to the quarterback versus offensive lineman.

When he isn't talking sports theory and highlighting key games in NFL history he is telling the story of Michael Oher. Michael was born to a crack addicted mother and suffered through a very painful and dark childhood to emerge at the Briarcrest Christian School where he eventually is adopted by a loving, supportive family, the Tuhoys (who are played in the film by Sandra Bullock and Tim McGraw). I discovered in reading the author's note at the close of the book that Michael Lewis and Sean Tuhoy were actually elementary school classmates!

Michael's story is incredibly inspiring and generates a great deal of hope in the reader. Thankfully, once finished with the book, the reader does not have to be finished with Michael Oher as he now plays for the Baltimore Ravens. Fan inspired by this book and the subsequent movie can continue to cheer for Michael in real life.

Michael Lewis has a superb writing style that is intelligent, well informed and often times humorous. This book appeals to both males and females, sports fans and non-football enthusiasts alike. In these tough times, "The Blind Side" offers an injection of happiness and hope. And hey, you might even learn something.

Extremely pleasant article, I appreciated perusing your post, exceptionally decent share, I need to twit this to my adherents. Much appreciated!.  best CBD cream for arthritis pain

Good composed article. It will be steady to any individual who uses it, including me. Continue doing what you are doing – can'r hold up to peruse more posts. Facebook video downloader

Nice post! This is a very nice blog that I will definitively come back to more times this year! Thanks for informative post. เดิมพันฟุตบอล 24 ชั่วโมง

Im no expert, but I believe you just made an excellent point. You certainly fully understand what youre speaking about, and I can truly get behind that. bandarq

i am for the first time here. I found this board and I in finding It truly helpful & it helped me out a lot. I hope to present something back and help others such as you helped me. 123 movies

We are specialized in the production of passport, SSN, license, I.D cards, Birth certificates, diplomas and many other documents of very high quality and other services. real British passport for sale

Norse Foundry since 2011 has been making the premier dice for roleplaying games such as Dungeons and Dragons, Pathfinder, Shadowrun, Fate and countless others. Featuring absolutely gorgeous gemstones with expert craftsmanship second to none. Dungeons and Dragons Gemstone Dice

Thank you for sharing best toasters

Very informative post! There is a lot of information here that can help any business get started with a successful social networking campaign. morrant super ultralite bpad smalll mens

An interesting dialogue is price comment. I feel that it is best to write more on this matter, it may not be a taboo topic however usually individuals are not enough to talk on such topics. To the next. Cheers. 토토사이트

I just want to let you know that I just check out your site and I find it very interesting and informative.. Open Online Demat Account

You make so many great points here that I read your article a couple of times. Your views are in accordance with my own for the most part. This is great content for your readers. Amazon Sweepstakes

END_OF_DOCUMENT_TOKEN_TO_BE_REPLACED

Read: The Lost and Found Bookshop

The Lost and Found Bookshop is the story of a woman on the brink of losing everything, who rediscovers herself through taking over her family's bookshop.

John Fram's novel about a missing quarterback in a small town in Texas is the perfect blend of Friday Night Lights and Stephen King.

In my lifetime I have seen only a few book series take the world by storm: Harry Potter, Twilight, The Girl with the Dragon Tattoo and now