Hi, friends. Happy Friday! The weather is beautiful in Boston today and I'm looking forward to a fun weekend.

Since it's already mid-September (what?) the fall shows are starting to come back. Here's a look at what's ahead:

This week, I have two recommendations for you, one movie and one TV show.

1. Cinderella (Amazon) - Amazon Studios has given Cinderella a musical reboot. Camilla Cabello stars as Cinderella. Idina Menzel plays her wicked stepmother. Billy Porter is her fabulous fairy godmother, adorned with jewels and sequins. Pierce Brosnan and Minnie Driver play the King and Queen. It's an all star cast.

The story is told through a mix of dialogue and pop songs. The list includes Janet Jackson's "Rhythm Nation," Madonna's "Material Girl," Des'ree's "You Gotta Be" and many more. You will definitely find yourself singing along!

The movie is rated PG and definitely appropriate for kids of all ages. I found it a little long, but the joy of watching at home is that you could always pause and watch it in two sittings.

2. Sex / Life (Netflix) - Netflix had been advertising this show to me pretty heavily. It wasn't immediately clear what the show was about, so I kept scrolling past it. One of my favorite podcasts, Girls Gotta Eat, recommended it on a recent episode, so I decided to give it a try.

The story centers around Bille, a woman living a picture-perfect life in Greenwich, CT with her handsome husband and two little kids. Only problem is, she can't stop fantasizing about her ex-boyfriend (and his Australian accent).

The show is all about this complicated love triangle and let me tell you, it is very racy. There is a lot of nudity, so just keep that in mind if you are watching say, in a public place.

There are eight episodes and the final one ended on a moment that makes room for a season two. We'll see if they get one!

There you have it. This week's top picks. Happy streaming!

END_OF_DOCUMENT_TOKEN_TO_BE_REPLACED

I have been so excited to share this post with you that I waited over two weeks to publish it to ensure I had enough time to write a review worthy of the special experience. For New Years Eve, two friends and I traveled to Puerto Rico. For four days we stayed at the Caribe Hilton (which I highly recommend), which is just minutes away from Old San Juan.

We made it through the first work week of 2021! Relax with some escapism. 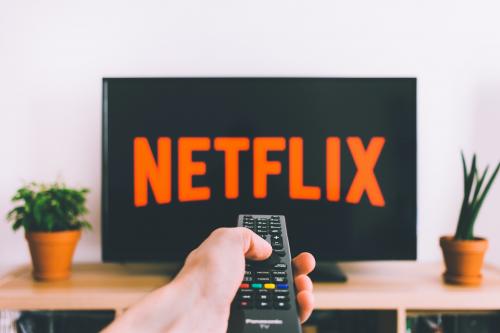 Feel like you've watched all the shows and movies the internet has to offer? Have no fear! New recommendations are here.