Hello, friends. I can't believe it, but this week marks one year since I started working remotely. I still remember reading that email from my company, asking everyone to stay home. I thought it would last a few weeks, maybe a month at the most. I think we're all feeling really emotional about this anniversary.

To help lifts our spirits, there is so much good content coming our way! For example:

Now onto this week's picks.

1. Oprah with Meghan and Harry (CBS) - Of everything I watched this past week, the one thing I am still thinking about (and following obsessively online) is Oprah's interview with Meghan Markle and Prince Harry. If you missed it, CBS is re-airing it tonight (Friday) at 8:00pm Eastern and Pacific.

I won't rehash it here, but if you want to deep dive on every comment, implication and fashion choice, follow Elizabeth Holmes on Instagram, @eholmes. She does a series of royal commentary called "So Many Thoughts" and she has done a major deep dive on each segment on this two-hour interview.

2. Moxie (Netflix) - After listening to Amy Poehler's episode of Armchair Expert with Dax Shepard and Monica Padman, I knew I wanted to watch Poehler's new movie, Moxie (she directed and co-stars).

It's about a shy girl in high school, Vivian, who decides to secretly write and distribute a feminist 'zine. She's played by Hadley Robinson.

Other girls in her class rally for the cause, starting a social media account and trying to disrupt school traditions (like the student-athlete of the year competition).

While Vivian is plenty busy with the 'zine (and keeping her identity secret), she develops a crush on her classmate, Seth, played by Nico Hiraga. They're adorable together and he has a particular scene at the end that's very swoon-worthy.

I have to admit, I found this movie incredibly slow. It's almost two hours long and it just doesn't move fast enough or raise the stakes enough to keep your full attention.

3. Minari (Amazon) - At the Golden Globe Awards earlier this month, Minari took home the award for Best Foreign Language Film. It is written and directed by Lee Isaac Chung, inspired by his own life.

It's the story of Jacob (played by Steven Yeun of The Walking Dead) and Monica (played by Yeri Han), a couple who moves from California to rural Arkansas. Jacob dreams of building a farm, while Monica wishes to return to the west coast.

They have two adorable children, Anne and David. David is played by Alan Kim and steals every single scene he's in.

Youn Yuh-jung stars as the children's grandmother, a gambling, foul-mouthed rebel who challenges all of their expectations for an elder.

Jacob's farm hand, Paul, is played by Will Patton. I recognized his voice immediately as Coach Yoast from Remember the Titans.

This movie is about so many things - adjusting to a new environment, clashing of cultures, the challenges of marriage, raising bi-lingual children, and following your dreams. What I loved most was that the entire time I had no idea where the story was going. I was constantly guessing and trying to predict (in a good way).

My mom and I purchased this on Amazon Prime. It was $19.99, which she rationalized as, "If we went to the movies, this is less than $10 dollars a person. It's actually a deal!"

After you watch, listen to the Fresh Air interview with Lee Isaac Chung on NPR. It's emotional, moving and will make you appreciate the film even more.

4. My Octopus Teacher (Netflix) - I cannot tell you how many people recommended this documentary over the past few months - friends, co-workers, podcast hosts. Many people even said they cried.

My mom and I decided to watch it together and let me tell you, this is weird. It's the story of Craig Foster, a filmmaker who becomes obsessed with the "kelp forest" and a particular octopus that lives there. He dives every single day for nearly a year, observing her and capturing her on film.

The way the movie is shot is incredible and you feel like you're on the ocean floor. But his humanizing of the octopus and his deep love for her felt . . . insane?

My mom gave up about an hour in, but I watched all the way to the end. Afterward, my mother was obsessed with reading critics' reviews and she screamed when she saw the film had a 100% rating on Rotten Tomatoes.

If you decide to watch, know that the movie is visually beautiful, but incredibly strange.

5. Canine Intervention (Netflix) - I will pretty much watch any show about dogs, so when Netflix released Canine Intervention, I was all over it. It stars Jas Leverette, the founder of Cali K9 in Oakland, CA. He's a trainer who mostly works with "difficult" dogs to help and them and their owners get more comfortable.

There are six episodes, each one is about 30 minutes.

My favorite is the one about a Maltipoo named Heaven. She was adopted as an emotional support animal for a young boy, but his mother is more interested in dressing the dog up and pushing her in a stroller, than actually training her.

Jas works with the boy, Andrew, to teach him all the commands. It builds Andrew's confidence and he even tells Jas, "I think a want to be a dog trainer when I grow up." It was very heartwarming.

There you have it! My top suggestions for streaming this weekend. I'll be back next Friday with a fresh round.

END_OF_DOCUMENT_TOKEN_TO_BE_REPLACED 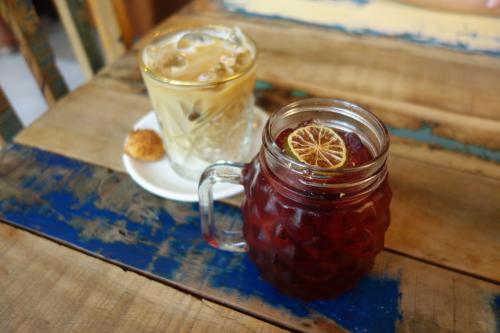 Number Ten Curacao is a beautiful restaurant in Willemstad, with indoor and outdoor seating. Each coffee comes with garnished with a coconut macaroon!

Rich People Problems is the third installment in the Crazy Rich Asians series, and it's just as delicious as the first two.