When my boss reminded me a few days ago that we would have this coming Monday off, I asked, "What even is Memorial Day weekend during quarantine?" But you know what? I'm now in a head space where I'm excited for the warmer weather, sitting in the backyard, taking long (masked) walks with Scout and of course, doing more streaming!

Every Friday I share a list of six shows or movies I recommend. If you've missed any of the previous rounds, you can find all of them on my TV recaps page. This is week 11.

Before we get into the fresh picks for this weekend, a few reminders of upcoming premieres:

1. Jerry Seinfeld: 23 Hours to Kill (Netflix) - Last Sunday, a friend recommended I check out Jerry Seinfeld's new stand up special on Netflix. I am not usually into comedy specials (with the exception of Hasan Minhaj's Homecoming) so I was skeptical.

I have to say, there are some pretty hysterical jokes in this hour-long set. One in particular about how your attitude changes when you turn 60 had me howling (my parents are in their 60s, so it was very relatable).

If you need a mood booster, this will definitely do it.

2. Run (HBO) - I don't have HBO, but my cable provider (RCN) was doing a free HBO weekend last week so of course I went straight to HBO on Demand to see what I could watch for free. In one evening, I watched the first five episodes of Run, which co-stars Merritt Wever (Nurse Jackie, Godless, Unbelievable) and Domhnall Gleeson.

Wever plays Ruby, a married mom of two feeling stuck in a rut. Gleeson plays Billy, a motivational speaker who has just suffered a major public humiliation. Billy texts Ruby "RUN," she replies back "RUN" and before you know it, they are ejecting themselves from their lives to meet up at a train station.

In those first five episodes, you learn about their romantic past, the "RUN" pact and their true feelings about their current realities.

Each episode is 30 minutes and you won't be able to resist pressing "next episode."

3. The Great (Hulu) - I've been watching a lot of Hulu the past few weeks and they were heavily promoting their new series, The Great, a satirical take on the life of Catherine the Great. The show was created by Tony McNamara, one of the screenwriters for the movie The Favourite.

The show is over the top in every way - the sets, the costumes, the food, the sex and the violence. Definitely do not watch this show with kids in the room. There are a few gruesome murders and injuries.

I've watched the first five episodes (of 10 total) and am excited to keep going.

4. The Good Wife (Amazon) - This week I started re-watching The Good Wife. The full series is available on Amazon Prime. There are seven seasons.

If you never watched it when it was on in real time, it stars Julianna Margulies as Alicia Florrick, a woman scorned. Her husband Peter (played by Chris Noth) was the State's Attorney and at the center of a sex scandal. While he's in jail, Alicia goes back to work for the first time in over 10 years, at the law firm of one of her former classmates, Will. Will is played the oh-so-handsome Josh Charles.

This is an amazing cast. Christine Baranski plays one of the law partners, Matt Czuchry (from Gilmore Girls) plays Alicia's rival and Archie Panjabi plays the badass investigator Kalinda.

If you like legal or political dramas, you will devour this!

5. Catastrophe (Amazon) - Catastrophe is one of my favorite shows of all time. Sharon Horgan and Rob Delaney are the co-writers and co-stars. They play Sharon and Rob (yes, their real names), two single people who meet while Rob is in the U.K. for a business trip. When he finds out several weeks later that Sharon is pregnant as a result of their whirlwind time together, he moves across the pond to give their relationship an honest shot.

There are four seasons and I loved every single minute. This is one of the most honest portrayals of a marriage you'll ever see on TV. The show is funny, smart and at times, heartbreaking poignant.

Each episode is 30 minutes. You'll find yourself wanting to keep hanging out with Sharon and Rob.

6. Center Stage (Netflix) - I have been watching a lot of movies from my high school and college years lately and one of the best from that time period is Center Stage.

It premiered in the year 2000 and stars Amanda Schull as Jody, a young woman who moves to New York City to join the American Ballet Academy. The star of the academy is Eva, played by a very young Zoe Saldana.

Jody has a crush on one of the academy's best male dancers, Cooper Nielsen. He rides a motorcycle. Need I say more?

The movie ends with one of the greatest dance numbers of all time. You should watch it just for that! That scene made the Jamiroquai song "Canned Heat" famous.

There you have it! I'll be back with another round of picks next Friday. Enjoy the long weekend!

END_OF_DOCUMENT_TOKEN_TO_BE_REPLACED 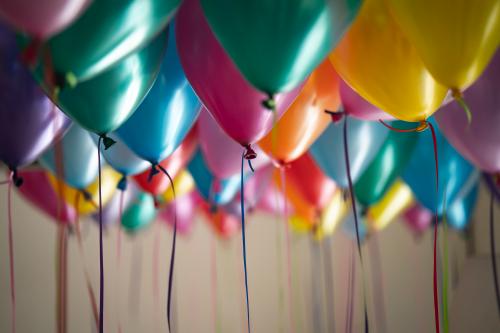 Today, January 4, 2020 marks 11 years of Pop.Bop.Shop. On this anniversary, I'm sharing reflections on how it all started and where the blog is going from here.

Hurry to the Colonial Emerson Theatre to see "Moulin Rouge! The Musical" before it closes on August 19. This show is incredible. I laughed, I cried and I left feeling inspired.