The first time I wrote about East Coast Grill was in April 2011 (you can read that post here). When I learned the restaurant was closing, I immediately emailed my parents and insisted that on their next visit to Boston we have one final meal there together. We did and we thought that was our last hurrah.

In April 2016, it was announced that the team behind Somerville's beloved Highland Kitchen would bring East Coast Grill back to life. As I was reading the article I could feel Bostonians all over the city cheering and high five-ing one another. On January 2, 2017 the restaurant reopened its doors. The Boston Globe wrote a beautiful piece on the restaurant's history and the new ownership. Be sure to read that here.

Earlier this week I went with two friends to experience the reincarnation. The chalkboard outside the front door excitedly screams, "We're open!"

I was a bit worried that we would have to wait for a table given the buzz around the reopening, but we were seated right away. Our waitress was warm and friendly and greeted us with a bowl of house made pickles (the same starter from the old days).

The pickles were fantastic - vinegary, but still maintaining a nice crunch. We ate them so quickly that our waitress asked, "Girls, would you like another bowl?" We tried not to seem too eager, but we shouted, "Yes, please!"

We spent a good five to ten minutes reading the cocktail menu.

The bar is helmed by Joe McGuirk of Highland Kitchen fame and the offerings are tempting - every single one of them.

We each picked out a drink and when they arrived, I squealed with delight! The neon, plastic animals live on.

One of my friends ordered the Pat's Caipirinha (for those who are not familiar, caipirinhas are made with cachaca, a very strong Brazilian liquor). The cachaca was mixed with lime, sugar, acai and blackberries. The drink was a gorgeous, deep purple color.

Unfortunately, the berries in the drink were so thick that it was impossible to sip the cocktail through a straw. If they had been muddled or strained for just a minute more, it would have made a huge difference. She let me take a sip (from the side, since the straw was useless) and I actually thought it tasted more strongly of lime than berries.

I decided on the Navy Grog, a blend of three rums, grapefruit, lime and honey. It arrived with a mermaid lounging on the side of the glass, which was just perfect, as the cocktail tasted like a drink you'd enjoy on a tropical vacation.

Our other friend chose the Eavesdropper, a mix of tequila, lime juice, grilled grapefruit and grilled jalapeño. Not only did she have the best tasting drink (the kick from the jalapeño is amazing) but she received the best plastic animal too - a marlin diving straight for the tequila!

After a few sips she said, "This is very fresh, has a great citrus taste, but is not too sweet." I snuck a sip and I totally agree, this drink is a winner. I will definitely be ordering it on my next visit!

With drinks in hand, we turned our attention to the food menu. We selected two appetizers to share and the first to arrive was the grilled romaine salad. It was topped with smoked chile ranch, charred corn, cotija cheese and cornbread croutons. Are you drooling?

The char on the lettuce had a great smoky taste. The mix of the ranch, corn and cotija mimicked the flavor profile of Mexican street corn, which we all love. The cornbread croutons added a well balanced crunch to the dish.

Our second appetizer was the smoked tofu dan dan noodles. We went from Mexico to China!

The noodles were served with tofu, mushrooms, charred greens and Szechuan peanuts. After a few bites, a friend remarked, "This dish has all the tang and salt you love from teriyaki, but with complex flavors and a subtle heat." Personally, I couldn't get over the satisfying crunch from the peanuts.

When we had emptied the bowl and our side plates, one friend admitted, "I literally want to lick every inch of this plate." She said that as she raked her fork against the nonexistent drops of sauce left on her plate.

For the next course, we each wound up ordering another appetizer or a combination of side dishes. The friend sitting across from me went with the Lumpia Shangai which were crispy fried pork and shrimp spring rolls, served with a pineapple sweet and sour sauce.

After making the entire plate disappear, she shared, "I didn't expect the spring rolls to be fried, but I am so glad they were. The spicy pineapple sauce made the entire dish. I wanted to soak up every last droplet!"

To my left, a friend was getting ready to dig into the waverider tacos. The plate came with two tacos (each one on two taco shells), crispy tempura fish, smoked red cabbage slaw, avocado puree and a sriracha-tartar sauce.

Halfway through the first taco she paused to say, "I loved that they doubled up on the taco shells. These are some of the best fish tacos I have ever had. Normally when I order fish tacos, I feel bloated from the fried fish, but this is so light. The avocado and the slaw both add a nice brightness."

In its original incarnation, East Coast Grill had the best vegetarian plate in town. I ordered it every time, no matter what else was on the menu or the specials board. I was sad to see that plate had been cut, but rather than pout, I decided to try and recreate it. I ordered two side dishes - the garlic seared kale and the mashed sweet potatoes.

The kale had great texture and retained it's crunch despite being seared. There was just the right of garlic (though you certainly won't be kissing anyone after this dish).

The mashed sweet potatoes were the best I've ever had. Period. I let the girls stick their forks in and one yelled, "There must be a full stick of butter in there!" Honestly, I don't care if there is. They were so heavenly. I wanted to take up residence inside that bowl.

Between the three of us we also shared a side of macaroni and cheese. This dish was the most underwhelming of the night. It didn't really have any kind of flavor (I kept resisting the urge to douse it in pepper) and the cheese sauce felt runny instead of that gooey stickiness you hope for.

When all the plates were cleared, our lovely waitress asked if we were interested in dessert. The other girls both declared that they were full and needed to tap out, but I insisted we look.

I convinced them to go in on the chocolate pecan pie. When it arrived, it was clear the pie was 90% chocolate, 10% pecan.

It was served warm with a heavy dollop of fresh whipped cream. I took my first bite and I kid you not, my eyes rolled into the back of my head. After watching me have that euphoric reaction, the girls each picked up a fork and took a bite. They were blown away and despite saying they were too stuffed, continued to scoop fresh bites.

I woke up still dreaming about that pie. The next time I see a late movie at the Kendall Square Cinema I am just going to leave, head straight to East Coast Grill, saddle up to the bar and order a slice of that pie.

Though we felt like we had eaten enough to feed a small army, when the bill came, it was only $38 dollars each (and that includes a 20% tip).

I was so happy when I learned that East Coast Grill would reopen and I was even happier to discover it's still as superb as we all remember. Don't walk, run to get a table. 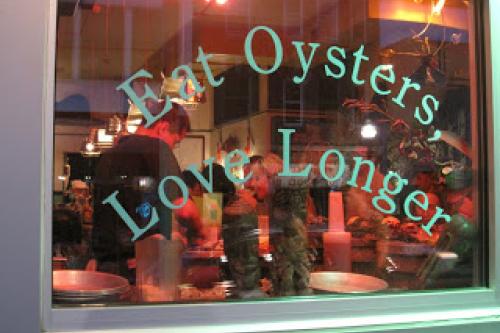 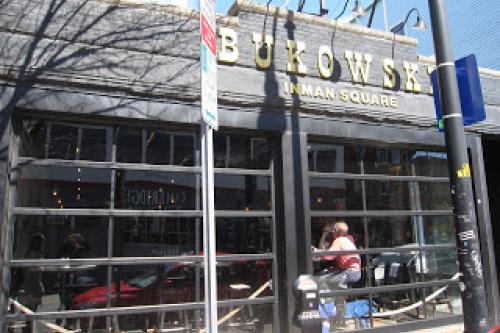 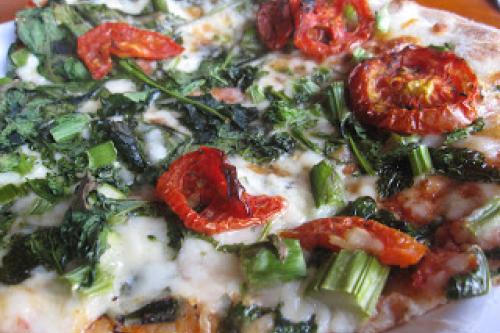 Dining Out: All Star Pizza Bar

I am a long time fan of brothers Kosta and Johnny Diamantopoulos who are the co-owners of the All Star Sandwich Bar in Inman Square in Cambridge. As my regular readers know, I used to live in Inman Square and frequent the neighborhood a lot.