Over Labor Day weekend one of my closest childhood friends came to visit from New York City. Every time she plans a trip I immediately start looking for fun, unique things for us to do. She's been here many times, so I challenge myself to find activities and restaurants she's never experienced before.

When I found out that there would be fireworks over Boston Harbor on Saturday of Labor Day weekend, I designed our evening plans around the 8:30pm fireworks. I knew the best neighborhoods to dine in beforehand would either be the North End, the Seaport or South Boston (affectionately called Southie). I ultimately decided on Worden Hall on West Broadway in Southie.

Worden Hall is located directly across the street from the Broadway T stop on the red line. That first block when you come up out of the T is now packed with great food choices - Worden Hall, The Maiden (you must get the breakfast skillet), Stephi's in Southie and Amrheins.

Did you notice the cute patio out front? Perfect for savoring the last days of summer.

When we stepped inside, my friend described the restaurant's vibe perfectly, "This feels like a bar that happens to serve restaurant-quality food." Worden Hall definitely has an after-work drinks / weekend game day atmosphere. There are TVs everywhere (but thankfully no sound!).

On the dining room side, there are cozy booths with leather banquettes beneath rustic light fixtures. This would be a great place to shake off your winter coat and order a hot toddy.

The bar is always packed. I couldn't stop staring at the lights hanging overhead. I wish I had a dining room big enough for even one of these beauties!

The hostess showed us to a high top table in the bar area. We had views of both the bar and the dining room. The front windows of the restaurant open to the street, providing us with a people watching view as well.

We began our meal by looking over the drink menu.

My friend ordered a cocktail called "That's The Idea" which was Ketel One Citroen, St. Elder, simple syrup, lemon juice, cucumber, basil prosecco and a lemon twist. I flipped when I saw the curled lemon rind. Such a fun touch.

After a few sips she commented, "This kind of smells like a candle, but tastes like a spiked lemonade." After that description I had to try it myself. It was light and refreshing, with the strongest taste definitely being the lemon. I didn't taste cucumber or basil at all.

I went for a drink called "Strictly Overtime" which was Four Roses Yellow Bourbon, Contratto Aperitif, Carpano Antica, lemon juice, ginger honey simple syrup, cabernet sauvignon, spiced cherry bitters and a lemon swath.  I never even knew I liked bourbon until a cocktail I tried recently at Deep Ellum in Allston. I find that I like bourbon best when paired with lemon or cherry. This particular drink made me a bit nervous because it had both bourbon and wine.

Despite my fears about this drink being too boozy, it was just right. My friend took a sip and said, "Wow, I ordered the most summery drink and you ordered the most wintery drink." It's definitely true that this cocktail would warm you up on a freezing Boston day.

With drinks in hand, we moved onto starters. We shared the Parisienne gnocchi which was served with summer squash, zucchini, blistered cherry tomatoes, spinach, fresh mozzarella cheese and pecorino cheese.

The dish was packed with fresh summer veggies and had a very generous portion of mozzarella cheese. That being said, we both felt the gnocchi was a bit mushy.

Our next appetizer was the star of the night, the crispy polenta fries coated in smoked tomato sauce, over a pool of black garlic aioli and grana padano.

The polenta fries had a great crunch to them (almost like the shell of a mozzarella stick). They were covered in smoked tomato sauce, which was one of the most delicious things I have ever tasted. The smoky flavor really elevated this dish. I wanted to soak up every last drop. I also loved the criss cross presentation, making it easy to pick one fry up from the stack.

For my entree I decided to try the potato and asparagus soup. It was made with yukon gold potatoes, grilled asparagus, chive creme fraiche and rosemary croutons.

The soup came in a very generous portion. It tasted like pure, blended vegetables. The asparagus added a brightness to the starchy flavor of potatoes.

My only regret was that I didn't have a slice of crusty bread to dunk in the soup. The minute I said that, my friend's hand flew up into the air and she was beckoning our waitress. My friend asked, "Would it be possible to get some bread?" With zero hesitation our waitress returned with not one slice, but an entire loaf of bread! It came toasted, sliced and with a side of butter (in a very adorable tea cup).

For her main dish, my friend selected the grilled rack of New Zealand lamb. It came with roasted heirloom carrots, cippolini onions, green couscous, pistachios and chimichurri. She posted a photo of it on Instagram with the caption "Nice rack." I'm still laughing about that.

A few bites in she said, "The lamb is cooked perfectly. It's like the experience of eating steak, but with the distinct, rich flavor you can only get from lamb. There are some really nice Mediterranean notes here, especially with the couscous. The pistachios add both a sweetness and crunch. "

We wound up going for the churro sundae. I expected the churros to be vertical, poking up out of the sundae dish. Instead, the chef had used churro batter to create an edible bowl for the sundae. It was topped with malted vanilla ice cream, caramel popcorn-pumpkin seed brittle, chocolate ganache and apple cider caramel.

I really liked the combination of the malted vanilla ice cream with the chocolate ganache and the popcorn brittle. The popcorn made it taste like a dessert you'd get at a country fair.

Unfortunately, the churro bowl was a bit rubbery. I took one bite and that was it. The ice cream and the toppings were definitely the best components.

Overall, our experience at Worden Hall was a good one. I really liked my cocktail and I will have dreams about those delicious polenta fries. There are so many menu items I still want to try, including two vegetarian entrees - the roasted vegetable strudel and the mushroom and vegetable lasagna. I also wouldn't mind sinking my fork into the double chocolate stout cake . . .

*This post is sponsored by Worden Hall. Though my meal was complimentary, all opinions are 100 percent my own.

I love Worden Hall! I found it super cozy in the winter last year, with great seasonal drinks.

I totally agree. Super cozy and perfect for coming in, shaking off your coat and warming up with a great drink. 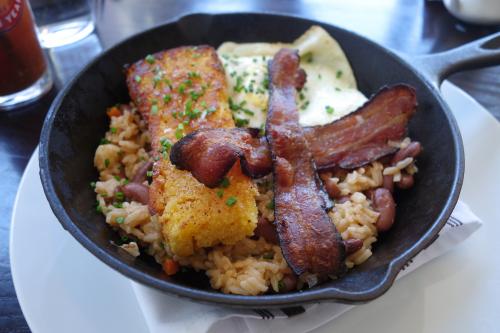 Dining Out: The Maiden

It's not often that I make the trek to South Boston. It's not that the neighborhood is particularly far away, it's more that parking is a nightmare for non-residents, especially in the winter. You've all seen those space savers on the news. Southie residents do not mess around when it comes to their parking spots. 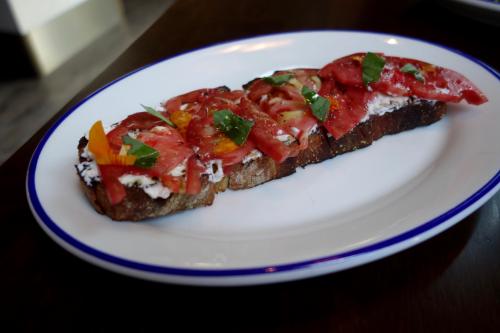 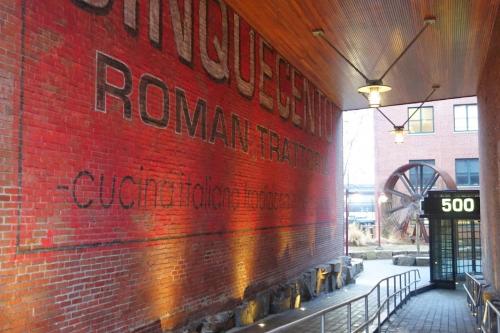 I love dining in the South End, but admittedly, I don't venture in that direction as much as I used to, mostly because the parking situation is so tricky. Two weeks ago a friend and I were trying to decide where to dine for Restaurant Week and after perusing all the menus, we selected Cinquecento on Harrison Ave.