Every year, for both the summer and winter cycles of Restaurant Week, I dine out with two friends. We dress up, wear pearls and head to a restaurant that none of us have been to before. Last week, for our 14th Restaurant Week dinner together, we tried chef Lydia Shire's Scampo at the Liberty Hotel.

I have so many happy memories at the Liberty. My cousin got married there, I've had countless girls night at Alibi and I happen to think they have some of the most beautiful Christmas decorations in the whole city.

We arrived for our 6:00pm reservation and I was excited to see that when you walk through the doors of Scampo you are greeted by the wine cellar.

As you enter the dining room, you walk around the bar which is studded with gorgeous rose gold light fixtures.

We were seated at a cozy table overlooking Scampo's outdoor patio. The hostess handed each of us the Restaurant Week menu.

Though the Restaurant Week three course meal looked excellent, we also wanted to check out the regular dinner menu.

I freaked out when I realized they had a mozzarella cheese bar and an entire section devoted to the classic Italian preparations for spaghetti. If you're gluten-free, they can make any of the spaghetti dishes with gluten-free pasta.

While looking over the menu, we each ordered a drink - a glass of Trebbiano, a glass of hibiscus sangria and a watermelon basil gimlet.

My friend described the Trebbiano white wine as deliciously smooth. I had the hibiscus sangria which was very tasty and not overly floral (which I was worried about). The watermelon basil gimlet, a mix of gin, fresh watermelon juice, lime juice and basil, tasted a bit like a sweeter version of pink lemonade. It was very drinkable. You could easily have two or three.

Moments later we were delivered a handful of bread sticks with a bright green fava bean puree. The bread sticks were placed directly on the table cloth, which you would never expect at a restaurant this fancy!

To begin, we shared two salads and one of the side dishes. The first to arrive was our selection from the mozzarella bar, a traditional pairing with heirloom tomatoes and basil. There were exactly three mozzarella balls so that we could each have one.

We all agreed that the dish tasted super fresh. The rich mozzarella paired with the juicy tomatoes and drizzled with balsamic was heavenly. My friend said, "I wish there had been this much more mozzarella" (while spreading her arms two feet wide).

Next we tried a salad of avocado, lemon cucumbers, cilantro, crushed peanuts and a toasted sesame dressing. We all commented that the dish was plated beautifully.

The avocado was buttery, but that richness was balanced nicely by the crunch from the lemon cucumbers and the peanuts. We all really loved the sesame dressing.

Last but not least, we shared the tempura green beans, which were easily my favorite starter. They were very lightly battered, but still had a great crisp to them. Because the batter was so light, you didn't feel outrageously full after eating them. The plate came with soy sauce for dipping as well as an aioli. Both sauces were excellent but I really loved the saltiness of the soy sauce.

For the main course, the friend sitting across from me went with the walnut risotto with bruleed figs and a grilled and toasted fig leaf. After a few bites she said, "This risotto is cooked perfectly. The combination of the walnut, figs and cheese is fantastic. It was such a nice way to eat risotto - a little nutty and a little fruity." I took two bites and I have to say, this was one of the best dishes of the night.

Next to me a friend was enjoying the tandoori sea scallops with tzatziki, cucumbers and whipped eggplant. I loved all of the bright colors of the dish. When she was finished I asked for her thoughts and she explained, "I really like the spices in this dish. The scallops were cooked just as they should be. The whipped eggplant was a nice, soft contrast to the scallop. I didn't need to tzatziki, I didn't even touch it. Though this may look like a small portion, I was very satisfied."

To go with her scallops she ordered a side of the polenta with chive butter and fried onions. She was kind enough to let each of us taste a few forkfuls and boy was that good! It had a crust of cheese over the top, almost like a French onion soup. Though it's considered a side dish, it came in a huge portion.

After much deliberation, I decided on the spaghetti cacio e pepe. The best versions I have ever had of this dish are at Eataly in New York and Babbo in the Seaport. Unfortunately, Scampo's version just couldn't compete. In fact, it didn't even come close. The way I like this dish is to have every single noodle coated in sauce. This lacked the basic flavors and textures I expect from a cacio e pepe.

We moved onto dessert, starting with the raspberry pavlova. It was lemon cream, raspberries in vanilla syrup and raspberry lemonade sorbet topped with a slice of lemon coated in powdered sugar.

A few bites in one of my friends said, "The lemon meringue is very airy (as a meringue should be) and it's packed with full size raspberries. I wish there had been more whipped cream to balance the sweetness of the berry flavor."

I chose the tiramisu (on our waitress' recommendation) and it was the best I've ever had. I would come back to Scampo just to eat this dessert. What makes it so special is the coffee beans crushed over the top that added a much needed crunch to a dessert that can often times taste very mushy.

On our way out of the restaurant we saw chef / owner Lydia Shire coming through the bar area. She was carrying a large box (it looked like it could be a wedding cake) so I didn't stop her to introduce myself, though I would have loved to. Lydia Shire is one of Boston's original celebrity chefs alongside Barbara Lynch, Jasper White and Ming Tsai.

If you have never been to the Liberty Hotel, it's a Boston must. It's an old jail that has been converted and they do a great job paying homage to its history with Alibi (their bar) and Clink (their restaurant). Scampo is one step up from both of those places and offers true fine dining (minus the bread sticks on the table cloth).

scampo is such a great fine dining spot! I have only been once and often forget about it. the entire hotel is such a gem!

I totally agree. I love everything about the hotel. I've been meaning to take Scout to Yappy Hour (the dog happy hour). 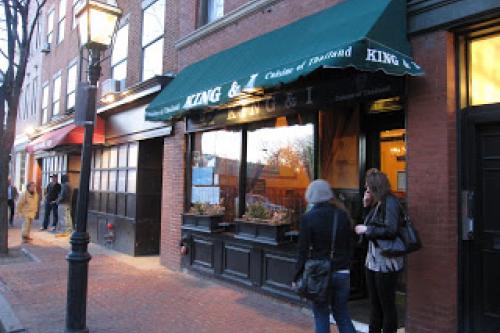 Dining Out: King & I

I've become part of a new tradition of monthly dinners with a particular group of girlfriends. We've always had a holiday tradition of drinks and a gift exchange at PJ Ryan's in Teele Square in Somerville, but one of the girls suggested we make it a monthly get together and we all enthusiastically agreed! So far we've met for dinner at Rudy's in Teele Square, Tory Row in Harvard Square and this Friday night we met at the King & I in Beacon Hill. 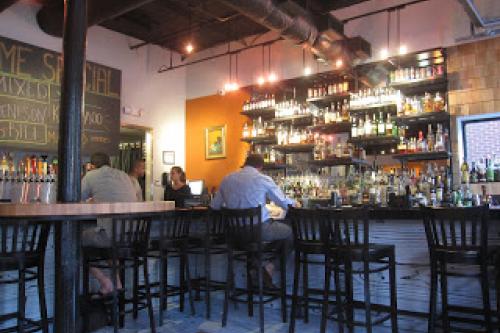 For the last year or so I'd been reading non stop about the ways in which chef Brian Poe had transformed the restaurant and bar called the Rattlesnake. I'd been there once for a friend's 21st birthday party the summer before my senior year in college and I had no desire to return. I did however, want to taste this exceptional food from chef Brian I'd been hearing so much about. 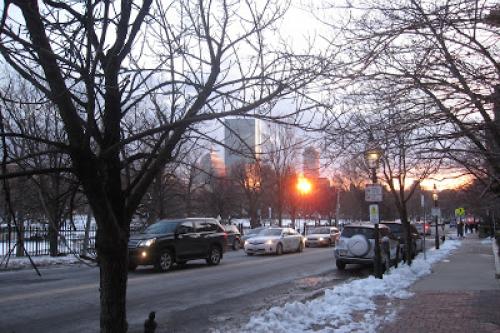 When I decided to start looking for a place to buy, many of my friends said, "Really? You're going to buy a house? What about living in New York? Or Miami? You'll be stuck here." Well friends, on my walk from work to Beacon Hill tonight I found yet another reason to fall in love with Boston all over again. Check out the view: