My trip to Chicago was prompted by a desire to visit one of my closest friends who moved there from Boston a few years ago. As soon as my tickets were booked we began a major planning session over email that lasted for weeks. I had a few things I really wanted to do - RPM Italian, Wrigley Field, the Wendella Boats architecture tour - but I wanted to leave the rest of the activities up to her and her local expertise.

One of the very first things she suggested was dinner at Little Goat Diner. I knew the name right away because the chef/owner is Stephanie Izard, the first female winner of Bravo's "Top Chef." I've never missed an episode.

The night of our reservation we headed to the West Loop a bit early to check out a street festival happening just steps from the restaurant called the Taste of Randolph. My Chicago hostess informed me that street festivals are very popular in Chicago during the summer and that there are often multiple festivals going on over the same weekend.

It was a $10 dollar donation at the door and we walked through food vendors, beer and sangria bars (holy long lines), craft booths and music tents. We didn't eat anything (we needed to save plenty of room for Little Goat deliciousness) but we did shop a bit. I wound up finding an awesome, vintage style cocktail ring that I am very excited about.

As we walked back toward Little Goat I noticed a spinning goat over the restaurant's entrance. How cute is that little guy?

The restaurant has windows on all sides. In the nice weather the shades are up and you can people watch from almost every seat.

Inside the space looks a retro diner.

There are funky light fixtures and patterned wallpaper adding plenty of character. We were seated right by one of the cool fixtures.

In addition to the cozy booths and communal tables there is also a counter that faces the kitchen. If you like to be right in the action, definitely request those seats.

When the hostess showed us to our table I gasped at the sight of the cute goat again!

That little guy was everywhere, including a small sandwich board promoting Little Goat's cold brew coffee for summer.

When I opened the giant menu I was so excited. In addition to the fun and creative twists on diner classics, the menu is decorated with hilarious illustrations.

Our first order of business was to decide on cocktails. It was super hot outside and we were in need of some ice cold refreshment. My friend opted for the Paloma (pictured at the back with the salted rim) and I went with the Tea N Tea. I'll take any chance to drink a spiked ice tea.

The Paloma was a mix of tequila, grapefruit, lime and club soda. When I asked my friend what she thought of the drink she commented, "I feel like I am in Mexico right now. This is the perfect blend of tequila and grapefruit. In fact, it's going down way too easy." My drink was roibos tea infused vodka, green tea simple syrup, lemon and soda. The first time I tasted a tea infused vodka was at Highball Lounge in Boston and I loved it so much that whenever I see that type of drink on a menu I have to order it. Little Goat's version was excellent and tasted like something you would happily sip in your backyard all summer long.

We worked up quite an appetite walking around the festival and smelling all that fried food so we started by ordering the fried pickles and onion rings. Why decide between the two when you can order the combo platter?

The plate comes with ranch dressing and curry mayo for dipping. The ranch was so good that we made it disappear before we ever even tasted the mayo.

For our main courses, my friend was deciding between the taco salad and the fish tostadas. She asked our waiter for his recommendation and he said the fish tostadas with zero hesitation. The plate arrived with three tostadas piled high with goodies.

After a few bites I asked for her thougths. As her eyes rolled into the back of her head she said, "This is just an explosion of flavors in my mouth. And it has lots of avocado which just makes everything better."

When I was deciding what to order I was excited to see in the burger section that any of the specialty burgers could be made with a veggie burger. Wanting to take advantage of that rarity, I ordered the patty melt.

The pretzel rye bread was expertly buttered and the American cheese inside was perfectly melted. I loved the thinly sliced pickles. The veggie patty itself was a generous size, but didn't taste too heavy.

When I told people I was going to Little Goat Diner, every single person said I had to try the chocolate malted milkshake. I have to admit, once I saw the shake menu I was very tempted by the horchata milkshake, but ultimately I followed the lead of my many foodie friends and went for a more traditional flavor.

The shake came in a classic soda shop presentation. It had a rich, pure chocolate flavor but you could definitely taste the malt. When you think about a chocolate milkshake, this is exactly what it is supposed to taste like. While I did enjoy it, next time I'm definitely going to try a more wild flavor.

Being such a big Stephanie Izard fan I had really high hopes for Little Goat Diner. Izard and her team did not disappoint! If I lived in Chicago I would be here all the time.

Little Goat is located in a really fun neighborhood too. I have a few other West Loop spots on my list - Bar Siena (an Italian place with a take out window for gelato and donuts), Expat (they serve boozy sno-cones) and Parlor Pizza Bar (with a huge outdoor patio). I'm hungry just thinking about all of these possibilites.

I had know idea she now has 3 restaurants. this place looks awesome. I too and smitten with that little goat logo!

She has a goat empire! I thought the logo was so adorable and I loved all the ways they infused it into the space. 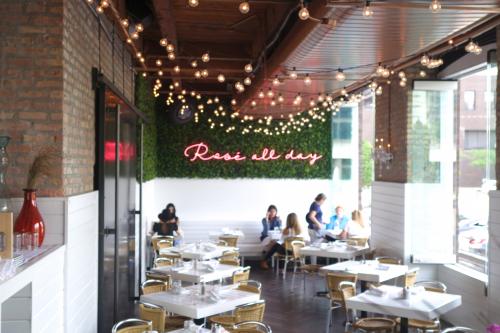 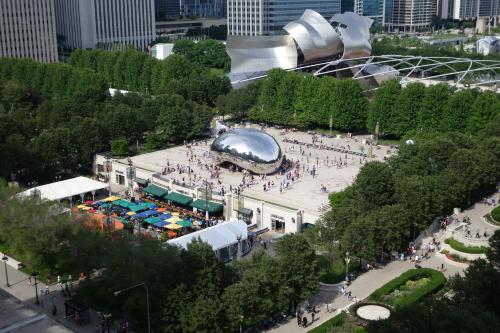 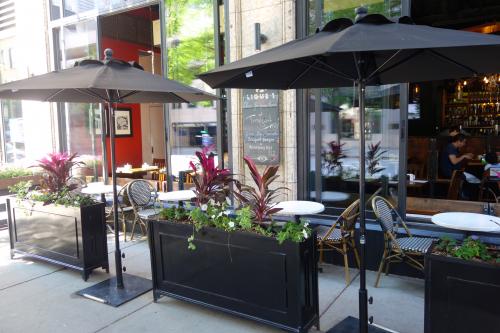