With only three months left in the year (eeek!) I have been pretty aggressively attacking my remaining new year's resolutions. Last week I crossed #14 off the list when I finally experienced the Bloody Mary bar at Barcelona Wine Bar.

I made my first trip to Barcelona Wine Bar on Valentine's Day in 2013. I've been many times for dinner, but as soon as I found out they did a Bloody Mary bar for Sunday brunch, I was determined to get there.

Last Sunday I went with six friends as the final celebration during my birthday week. Barcelona opens for brunch at 11:00am and we were at the door a few minutes early. They were kind enough to let us in and have us stand at the bar until they were ready to begin service.

While we were waiting I was able to snap several shots of the Bloody Mary bar before before anyone was allowed to touch it - a food blogger's dream! The whole bar area was flooded with natural light from the floor to ceiling windows that face the street, making these shots totally perfect.

Here is the full set up: 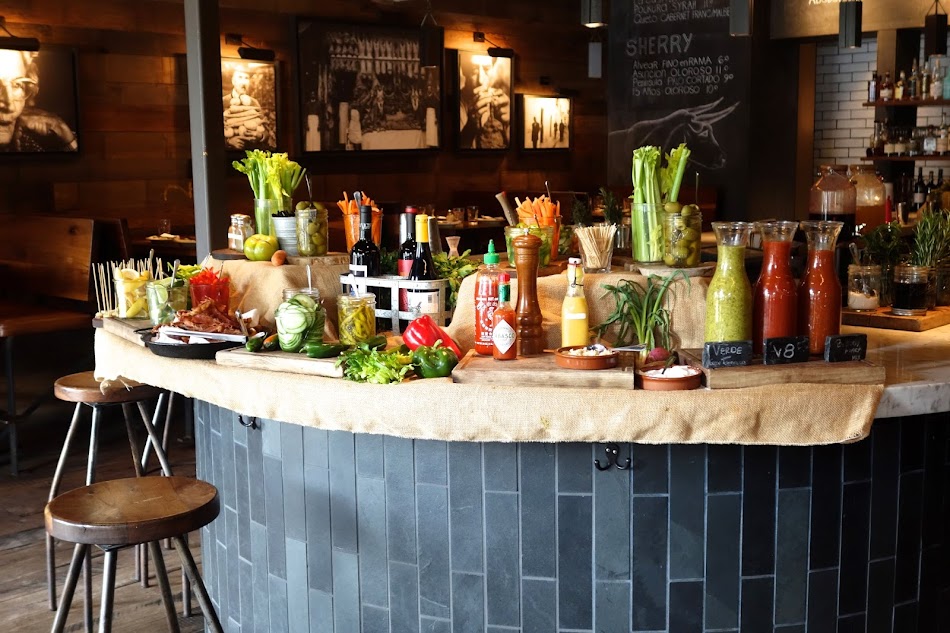 When you place your drink order, they give you an empty glass. You take it to the bartender, who gives you a shot of Tito's vodka and a heap of ice (for me, it was way too much ice). 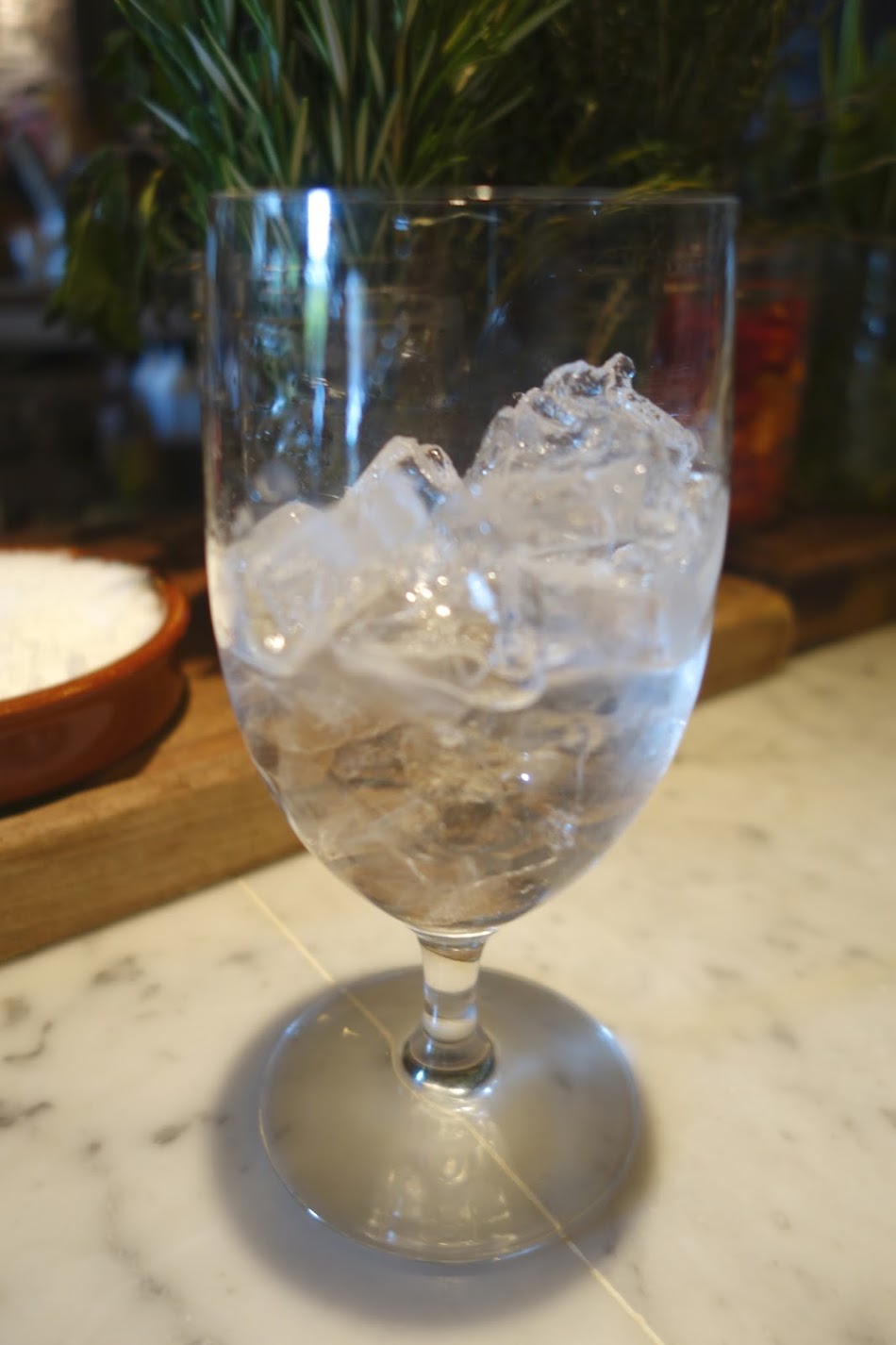 Then you go to town!

The first selection to make is if you want Bloody Mary mix, V8 or the verde (green). 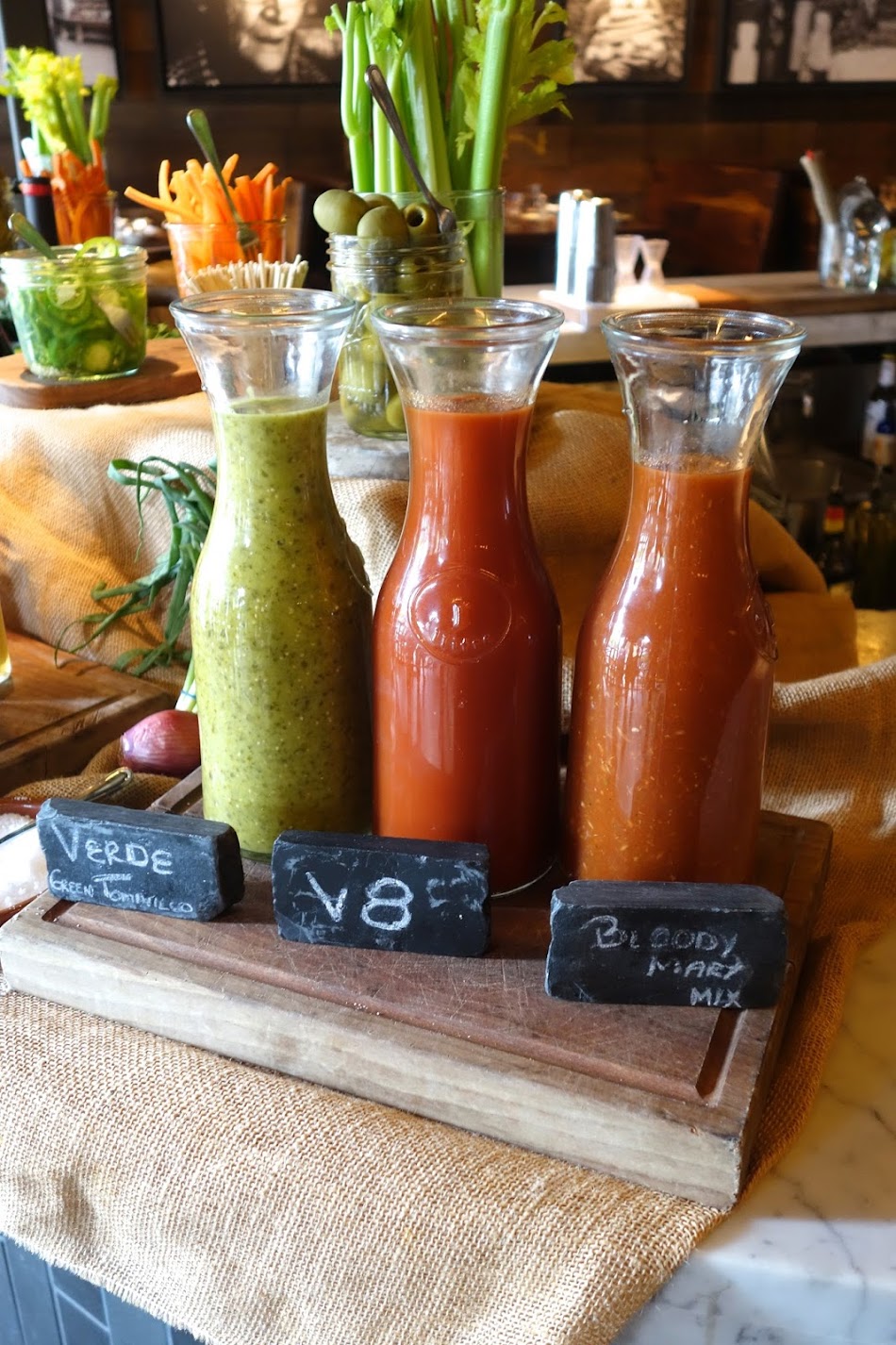 Next up, something for the spice lovers - horseradish, tabasco, sriracha and black pepper. 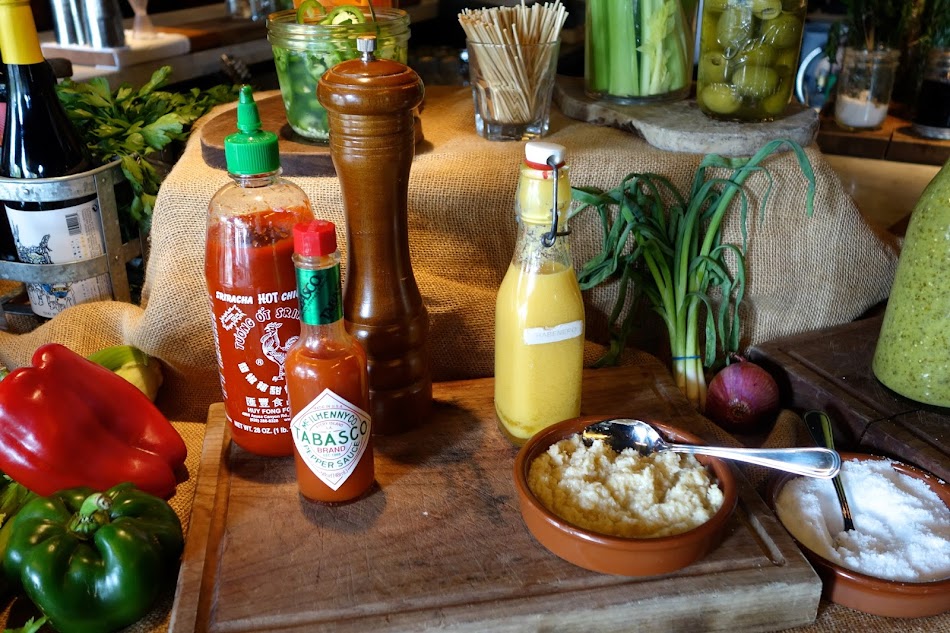 Then the pickled items - peppers and cucumbers. 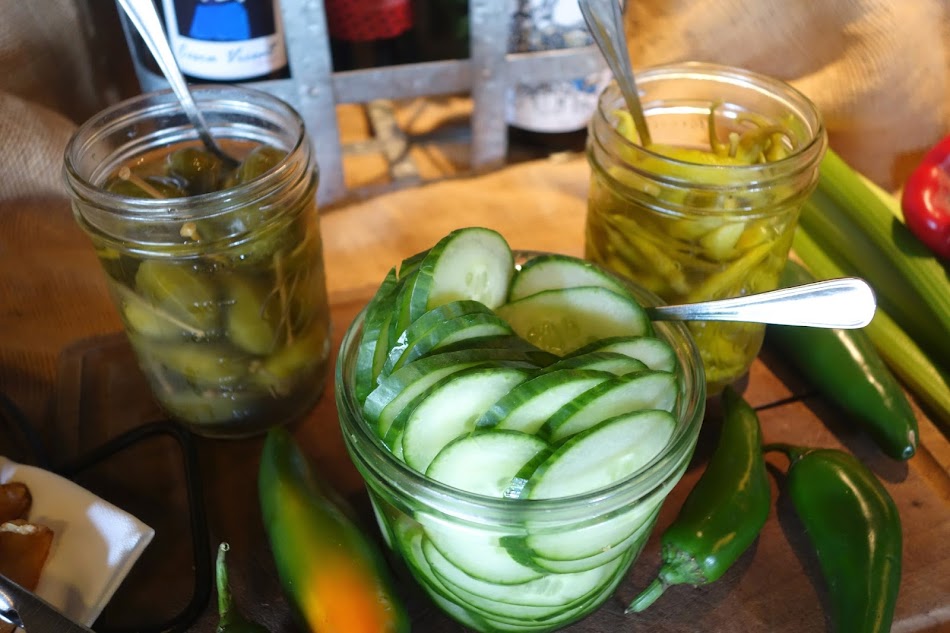 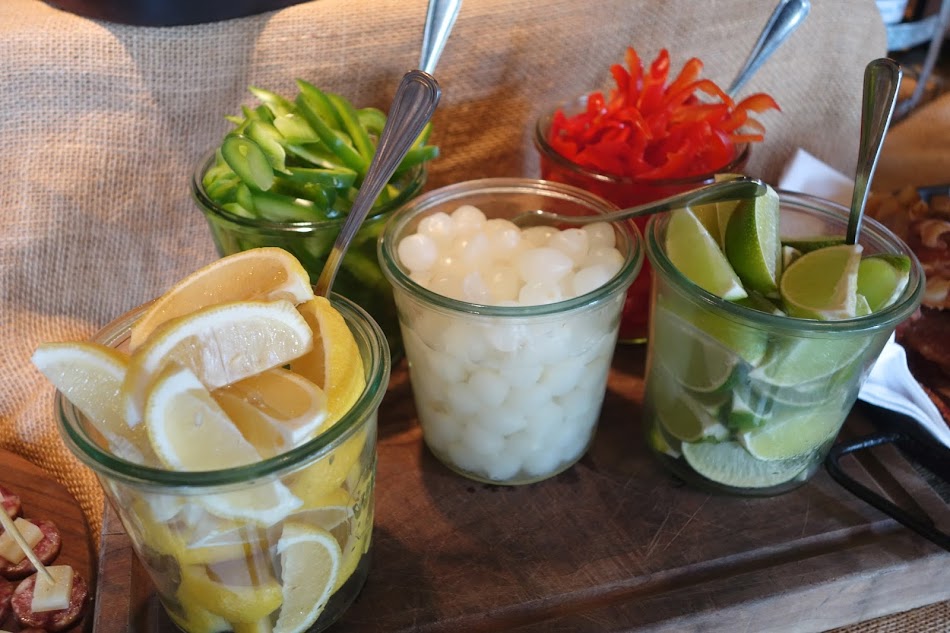 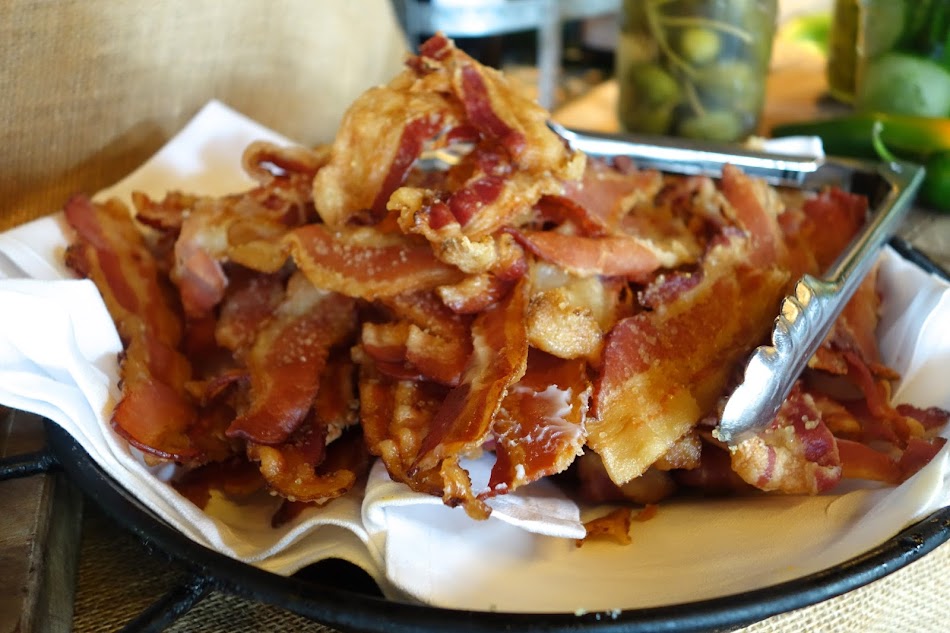 And then little sticks of chorizo y queso (sausage and cheese). 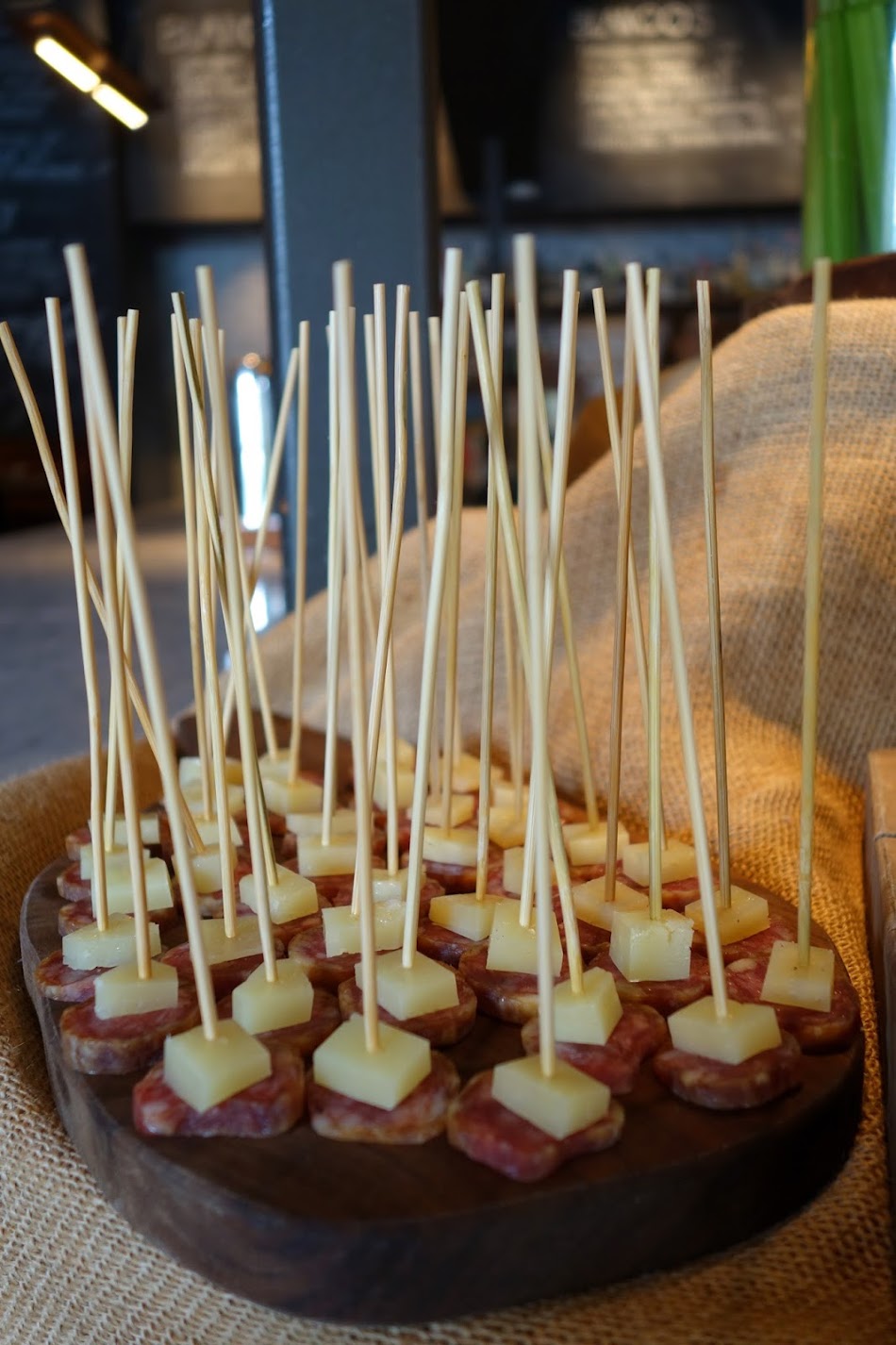 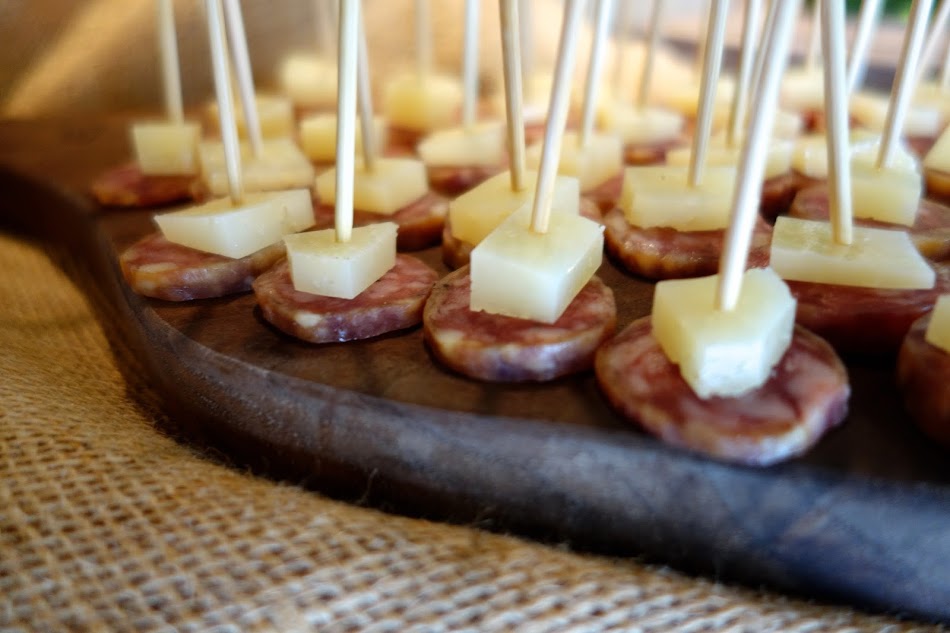 I used the Bloody Mary mix, horseradish, two jumbo green olives and a celery stalk. Personally, I was hoping for dilly beans, pickle spears or pepperocinis, but they had none. 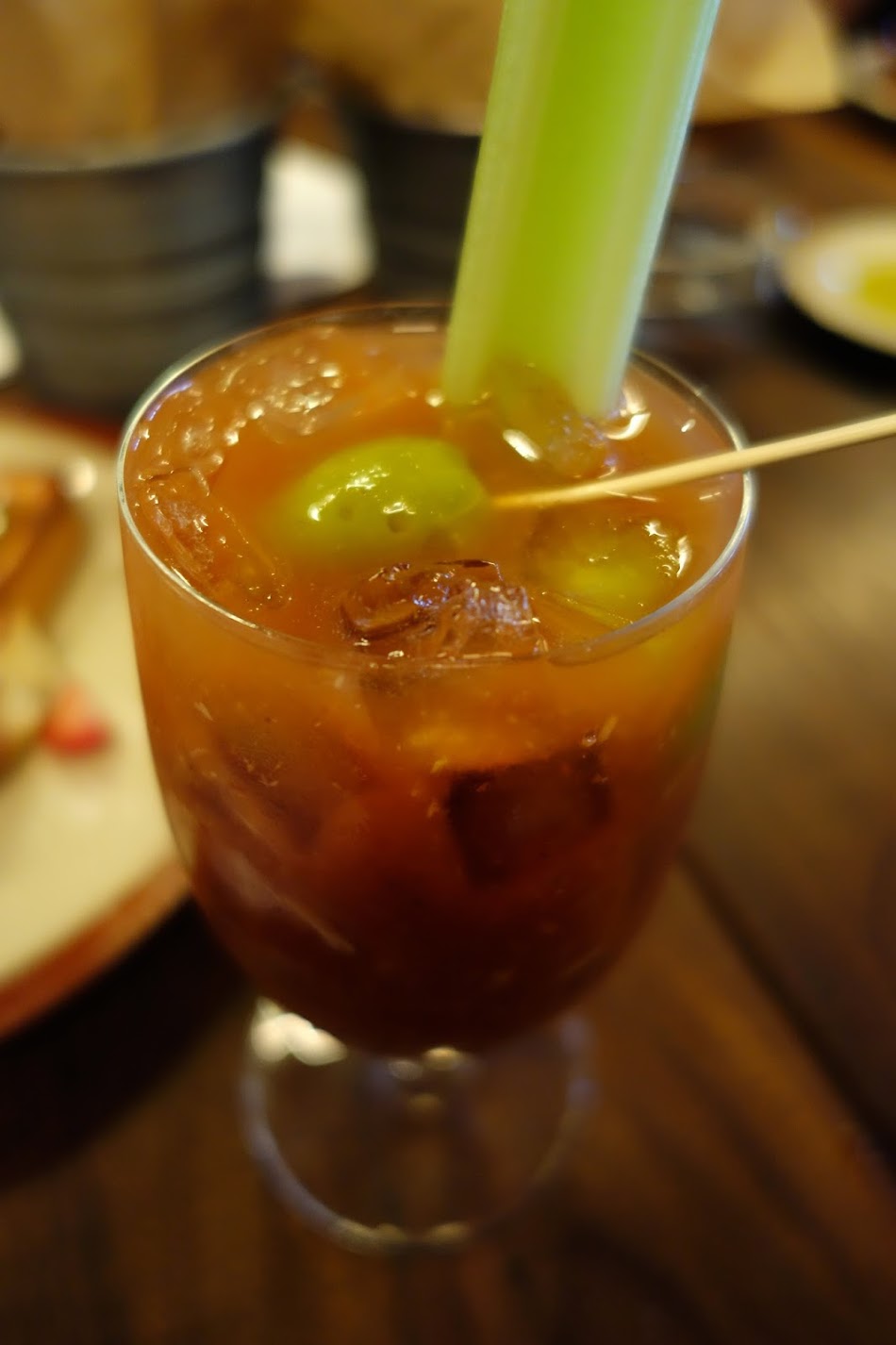 My friend packed hers with a combo of the Bloody mix and the verde mix, celery, olives and cucumber. 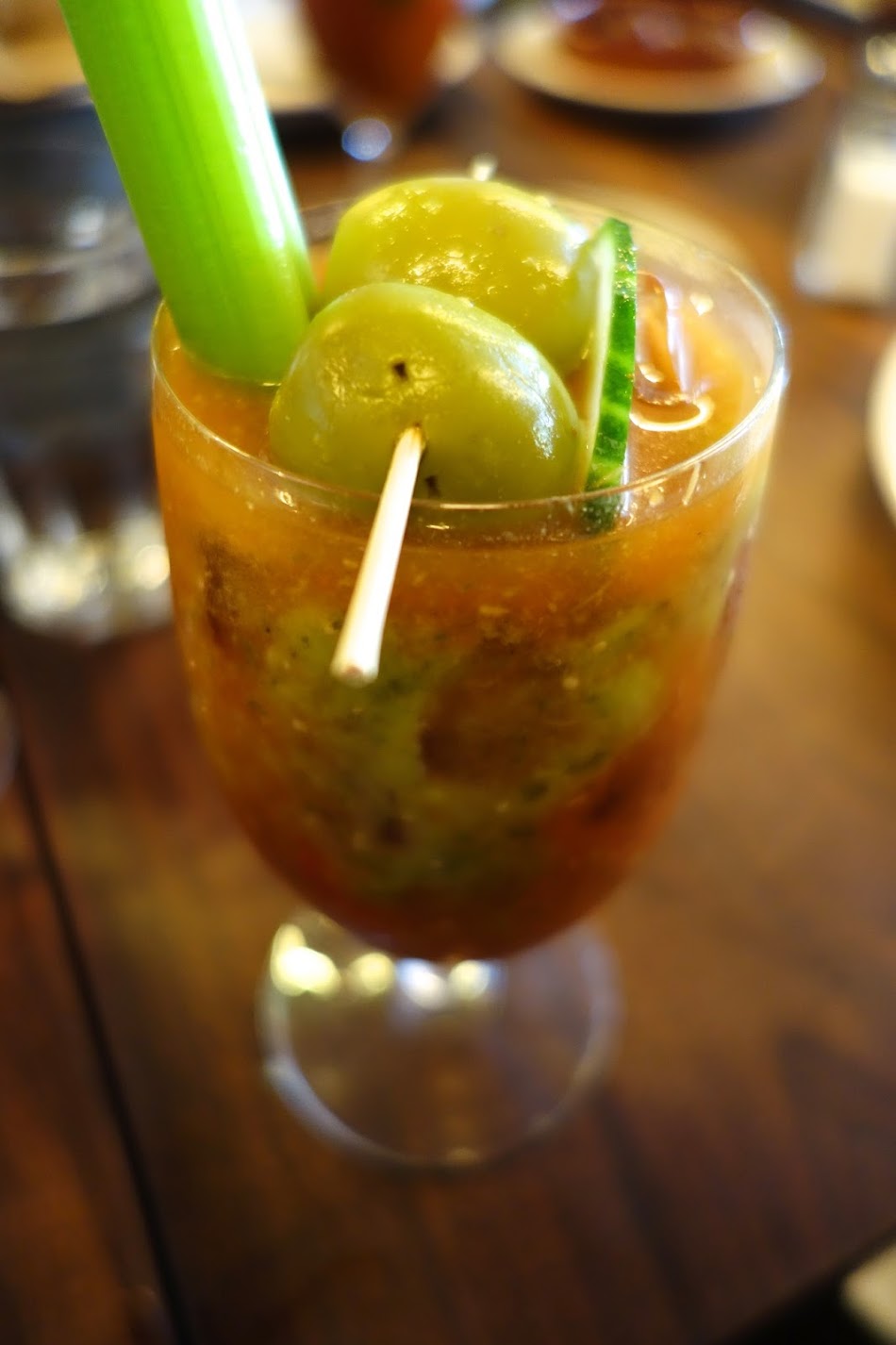 The Bloody was good, but definitely not the best I've had. Even though I was stoked to try this, the food at the brunch actually out shined the Bloody Mary bar by a mile.

Once we'd returned to our seats after building our Bloody Marys, our waitress arrived to take our order.

Some of the girls who skipped the Bloody bar ordered the Cava sangria which had Cava (of course), St. Germain, vodka and a sprinkling of fresh fruit on the top. 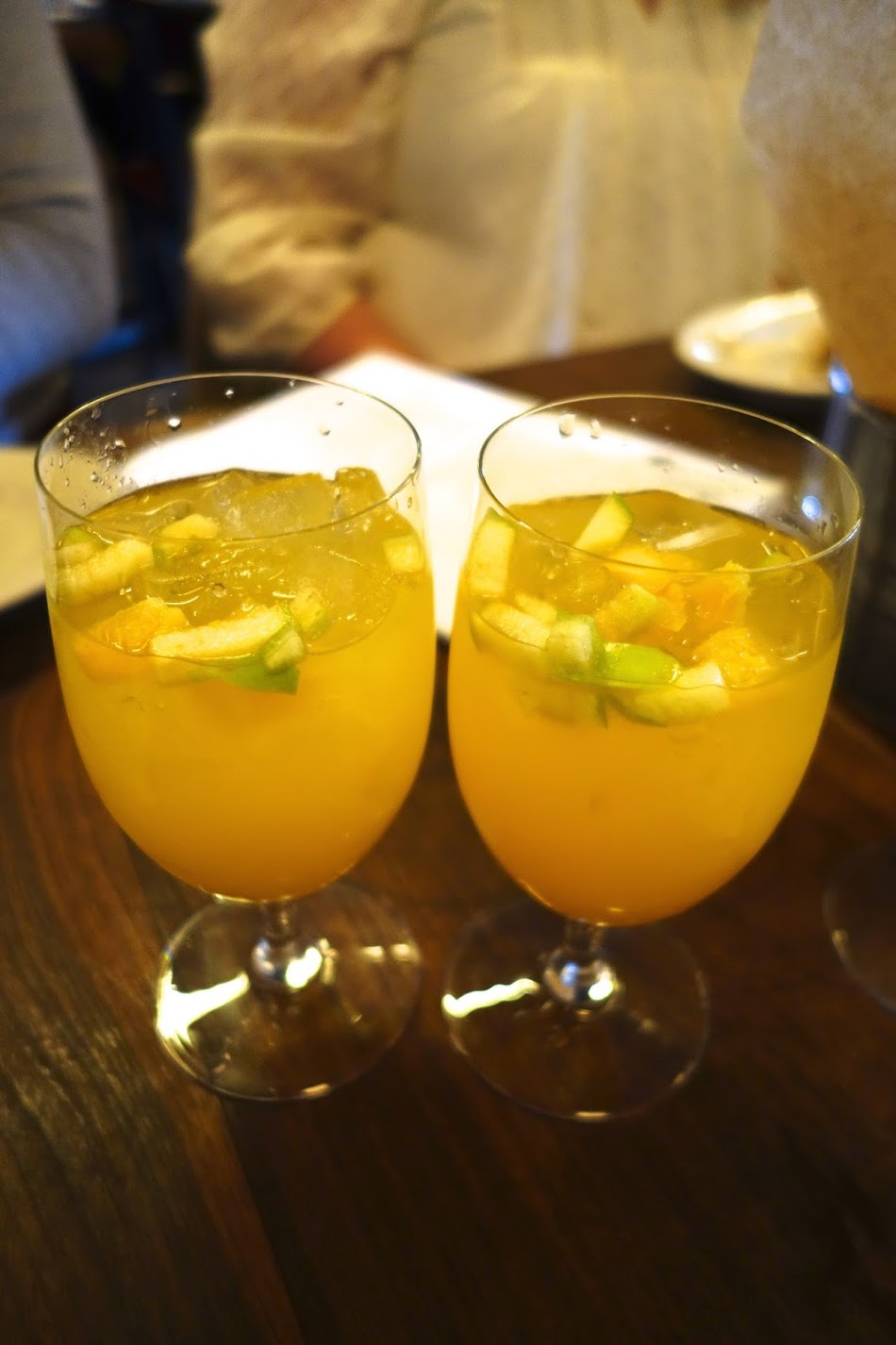 They said, "This was the perfect brunch sangria. It was super light. Though it wasn't listed on the menu, it tasted like it might have had a splash of orange juice."

Once everyone had a cocktail, we placed our order. There were so many things we wanted to try, that we just decided to order everything that appealed to us and share it all.

The first plate was the omelette with spinach, caramelized onions and Manchego cheese. We all agreed that this omelette was the ideal size. If you ate it by yourself you would still have plenty of room for tasting additional dishes and if you shared it, there was enough for each person to have two bites. The veggies were cooked expertly and the cheese glued it all together. 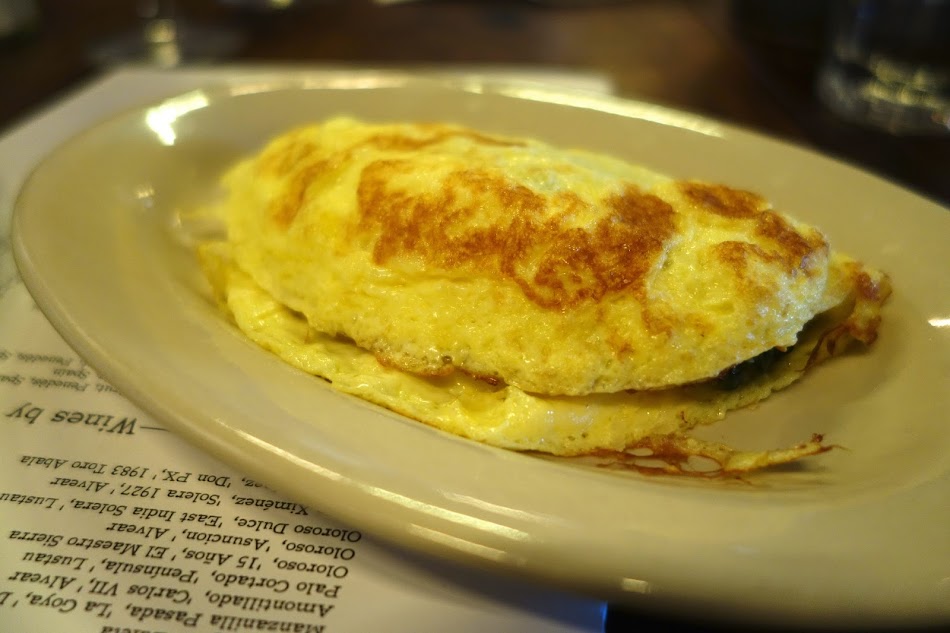 We ordered a second egg dish, the eggs rotos (roto is broken in Spanish) which was scrambled eggs served with peppers, mushrooms and fresh herbs. I thought the flavor was pretty mild and this wasn't a stand out dish. 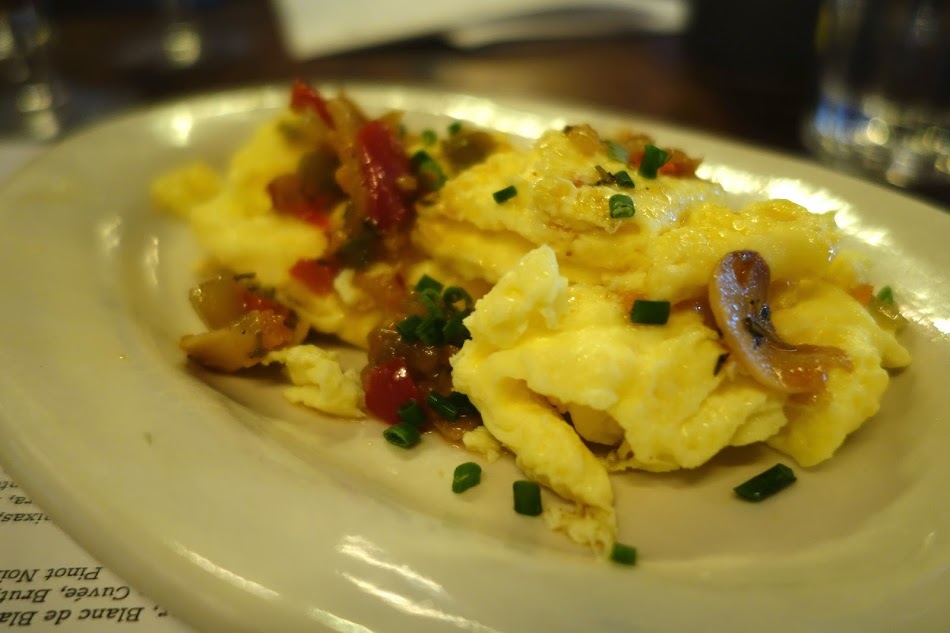 You can't have brunch without some form of breakfast potatoes. We ordered the papa buenas which were cooked in rosemary, sage and brown butter. They were heavenly! The brown butter was pure ecstasy. 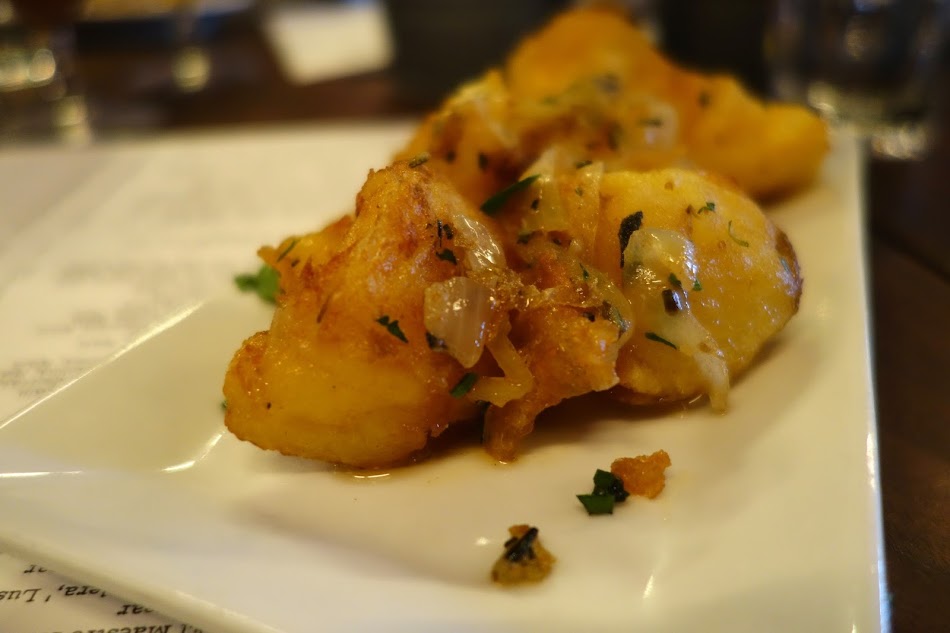 We also requested the patatas bravas (a tapas staple) which came slathered in salsa and garlic aioli. We had two orders. 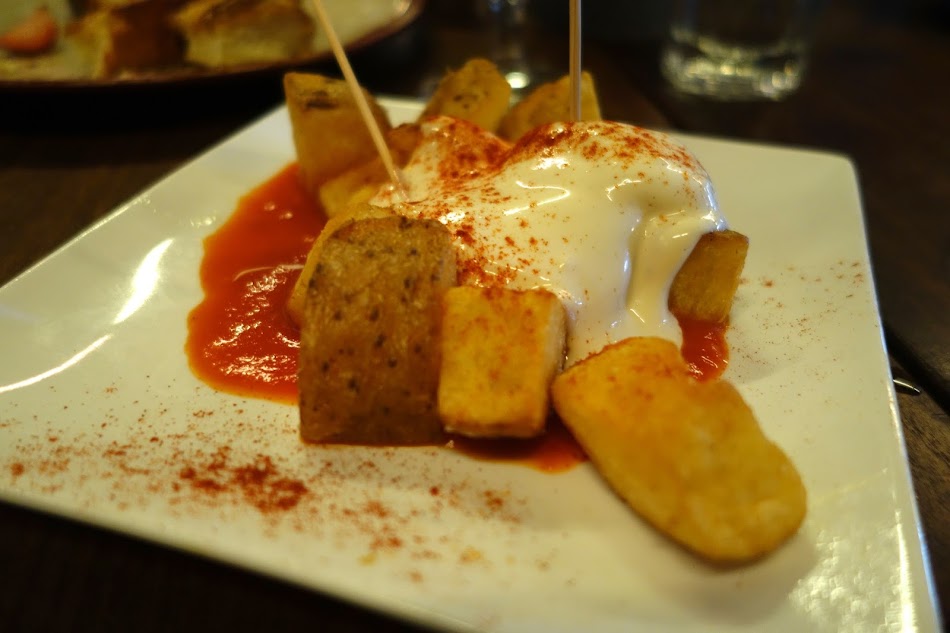 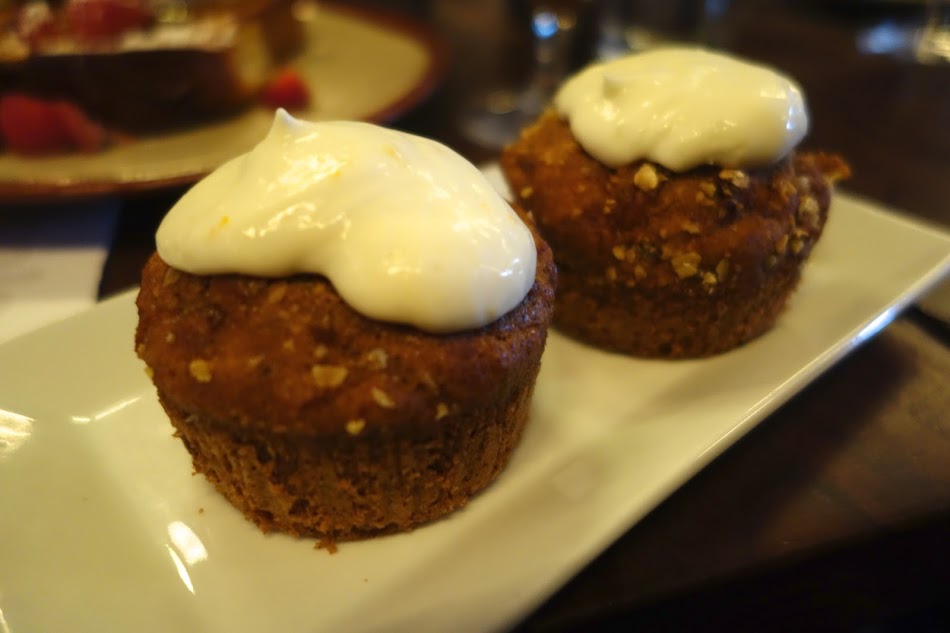 A little sweeter was the brioche French toast topped with pear butter, strawberries, blackberries and powdered sugar. The pear butter was so yummy that I never even used the side of maple syrup. 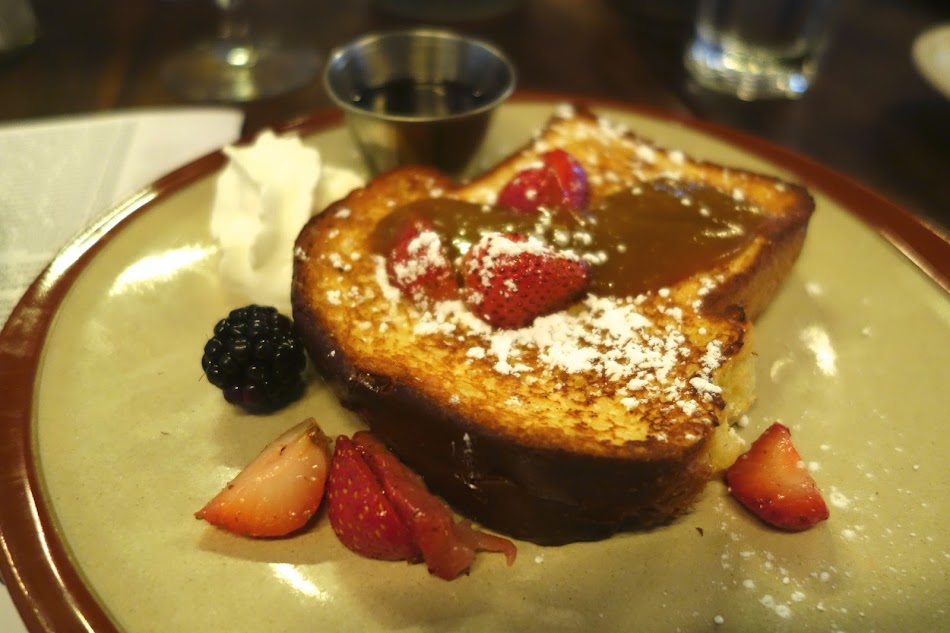 One of the girls tried the chorizo with sweet and sour figs. She said, "They were swimming in a balsamic glaze that had the consistency of BBQ sauce. It was both sweet and tangy." 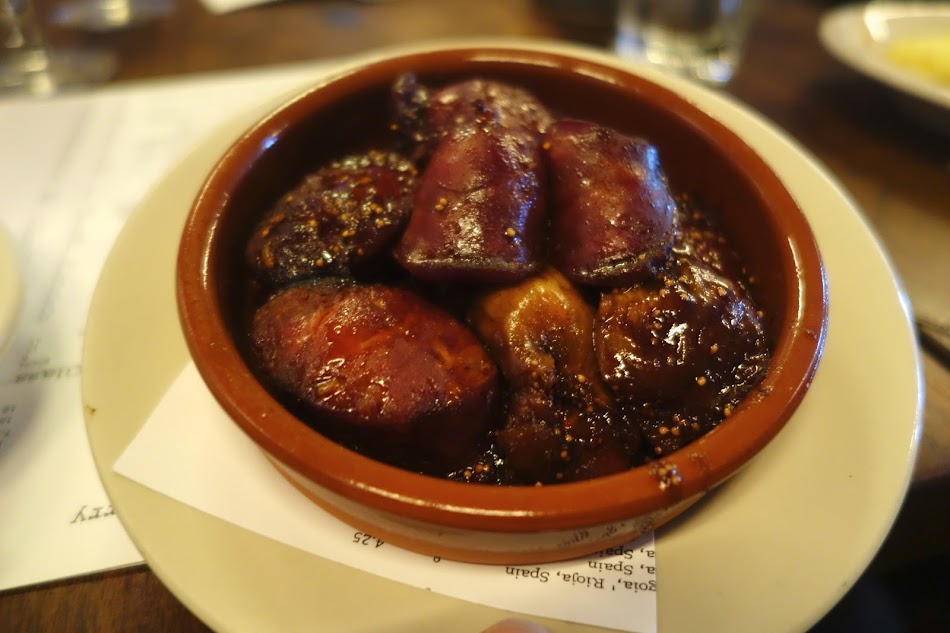 At one end of the table, two girls decided to share an order of buttermilk fried chicken. When I asked for their thoughts, one piped up, "I would never have thought to order fried chicken at brunch, but with tapas, you can!" 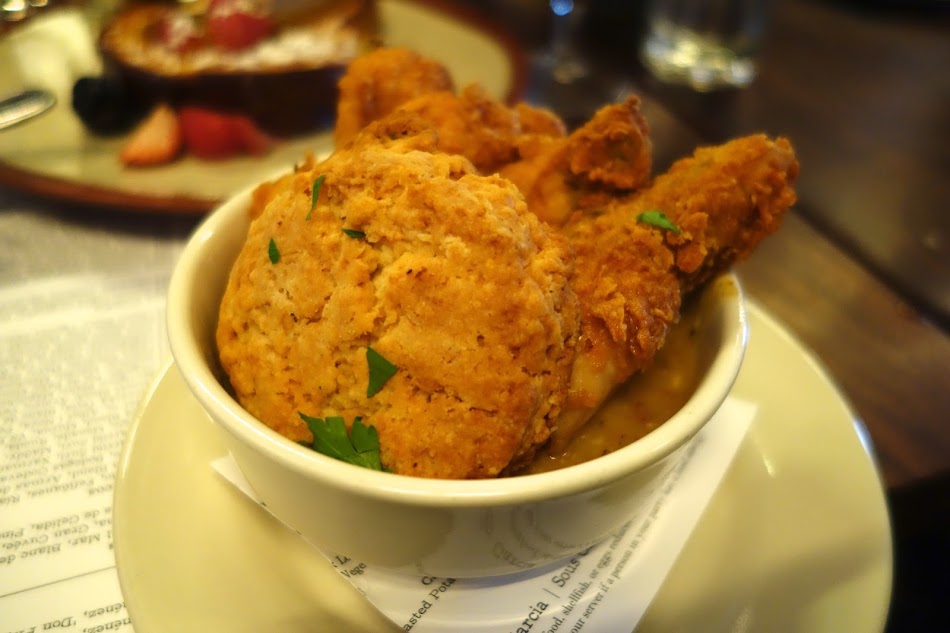 Not only did we totally clear our plates, we ordered seconds of several dishes. One friend said, "This was the best brunch ever because we got to eat all the things - sweet, savory and fried!"

We asked for the check, but instead of returning with the bill, our waitress appeared with the molten chocolate cake topped with a birthday candle. 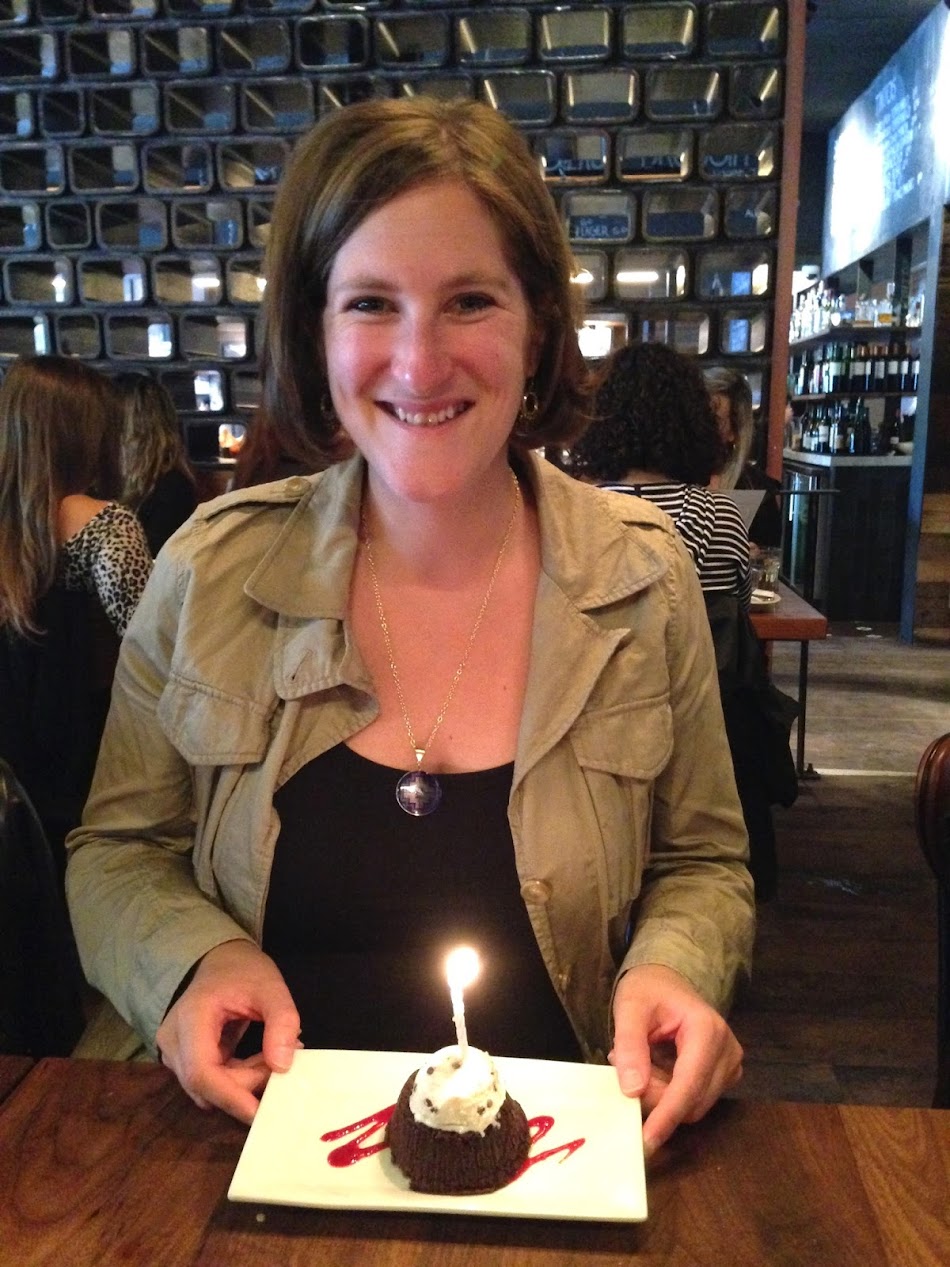 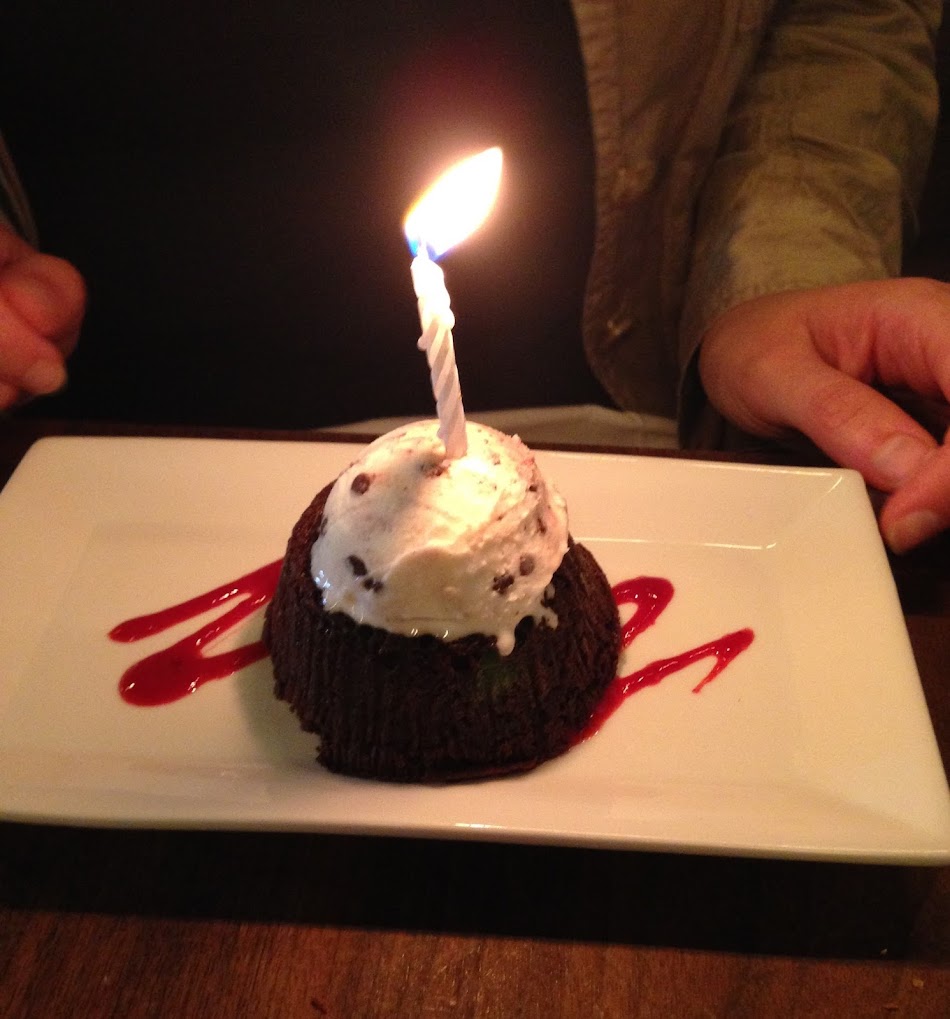 The cake was served a la mode with chocolate chip ice cream and a raspberry drizzle. I took one bite and my eyes rolled into the back of my head. It was so rich, in the best way. The combination of the warm chocolate cake with the ice cold scoop was divine.

Before leaving, we snapped a group photo in front of the open kitchen. 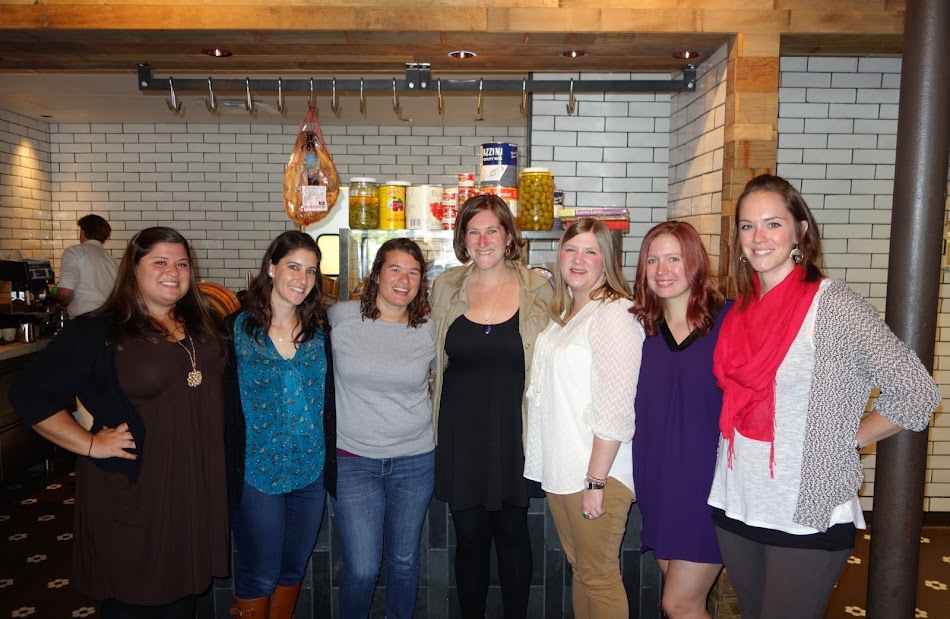 You may have noticed in the photos that my hair was looking extra snazzy on this particular morning. I paid a visit to Dry Bar in Chestnut Hill before brunch and they totally transformed me! I was worried they wouldn't be able to do much with my new short 'do, but they rocked it. 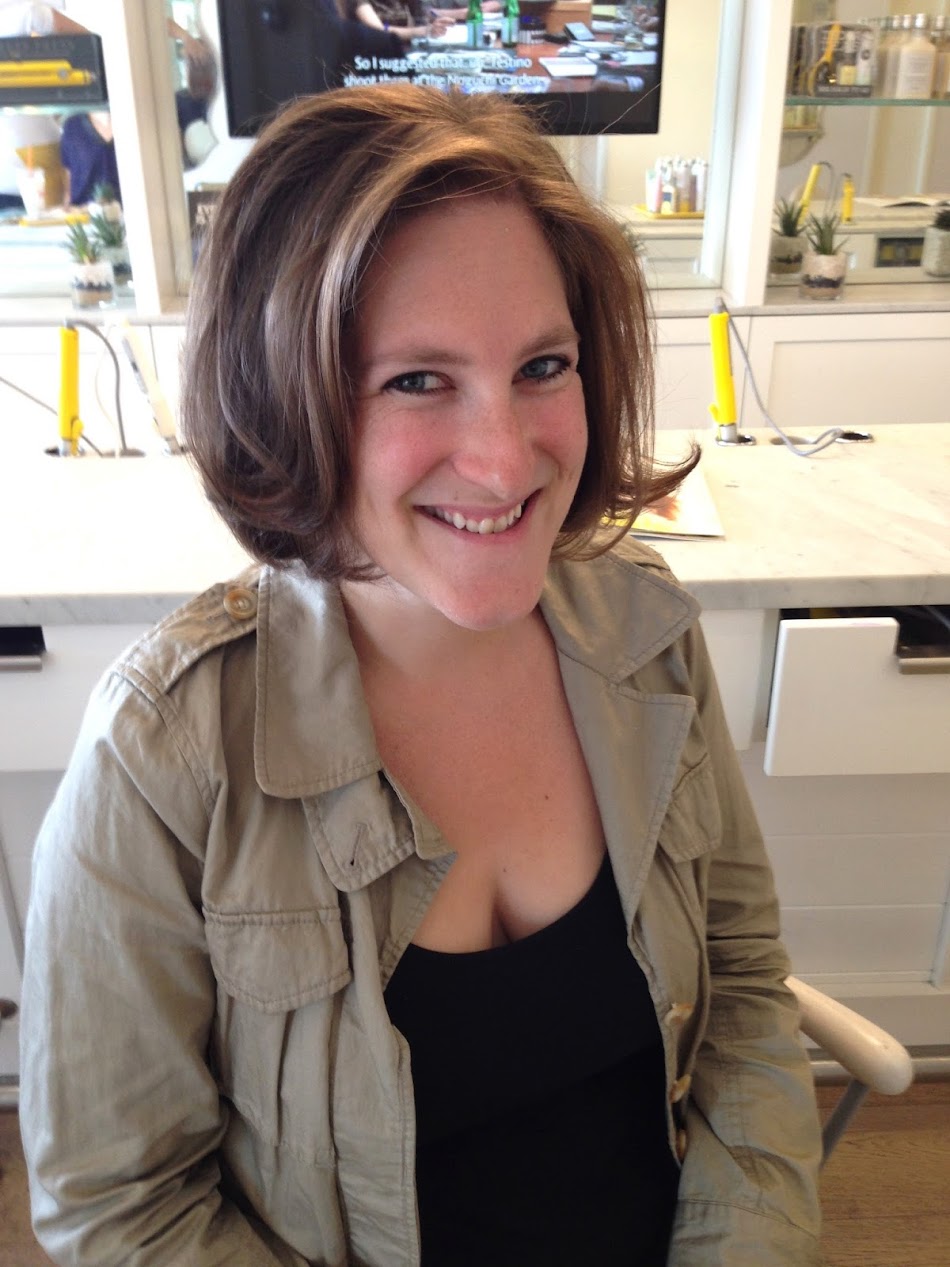 Overall, our brunch at Barcelona Wine Bar was a success. Though the Bloody Mary bar turned out to be just ho-hum, the food was excellent. It was really fun to sample so many different dishes. I highly recommend it, especially with a group (though be prepared for some funky math when you try to split the check).

With the trip to the Bloody Mary bar complete, I now have ten resolutions completed, three in progress and just two on the back burner. Getting there!

An extra special thank you to all the ladies who joined me on this adventure! 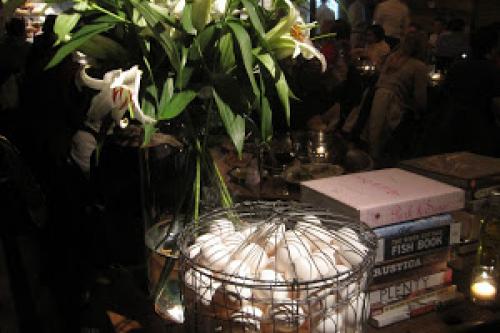 Back in December I was working from home the week between Christmas and New Years. I was out and about in Brookline on one of those days and I noticed a new restaurant was moving into the space formerly occupied by American Craft on Beacon Street in Washington Square in Brookline. I was driving and couldn't see what exactly was going in there, but a few days later, a friend who lives in the neighborhood told me it was going to be a tapas place. 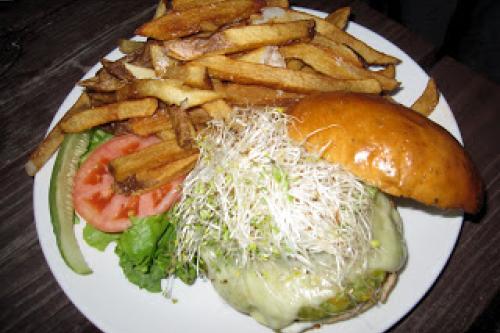 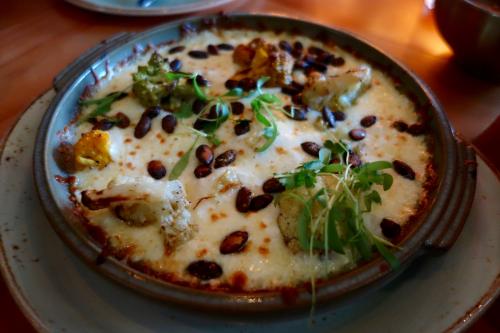 One of my best friends from college was born on Cinco de Mayo, so each year we look for a special Mexican place to celebrate. This year the birthday girl's wish was to try Burro Bar in Brookline, the sibling of The Painted Burro in Somerville, which is my undisputed favorite place for brunch right now.