I started working in Kendall Square in Cambridge back in January. In the 10 months I've been spending my weekdays in this neighborhood, I've hit up a ton of restaurants - Area Four, Clover, Commonwealth, Kika and more. However, there are still a few places I haven't managed to get to, despite working so close by.

One such place was Ames Street Deli. I'd read about their cocktails and a few of their sandwiches online and in the Improper Bostonian, but I'd never made my way there. Until this week!

I arrived to Ames Street Deli on a rainy Wednesday morning. As I walked up I was really impressed by the floor to ceiling windows. A superb feature for people watching. 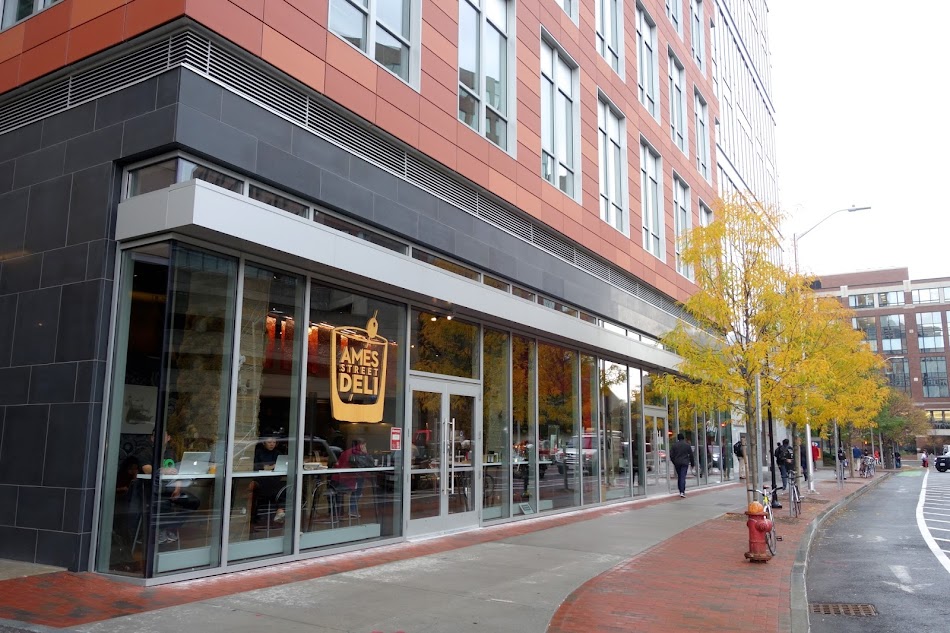 Inside I was immediately drawn to the marquee letters over the bar. I don't know when I became obsessed with this particular decor item, but I love them! 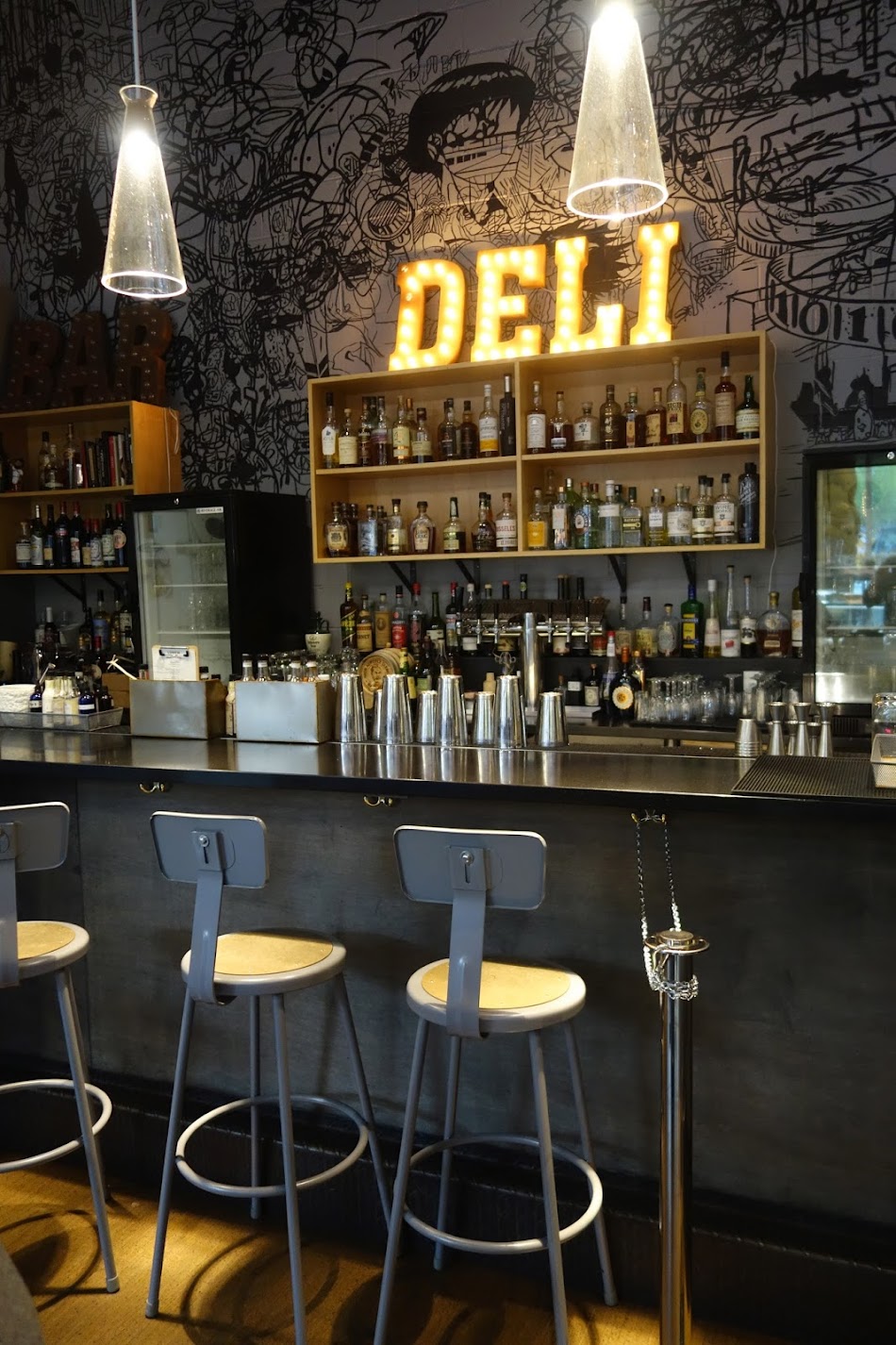 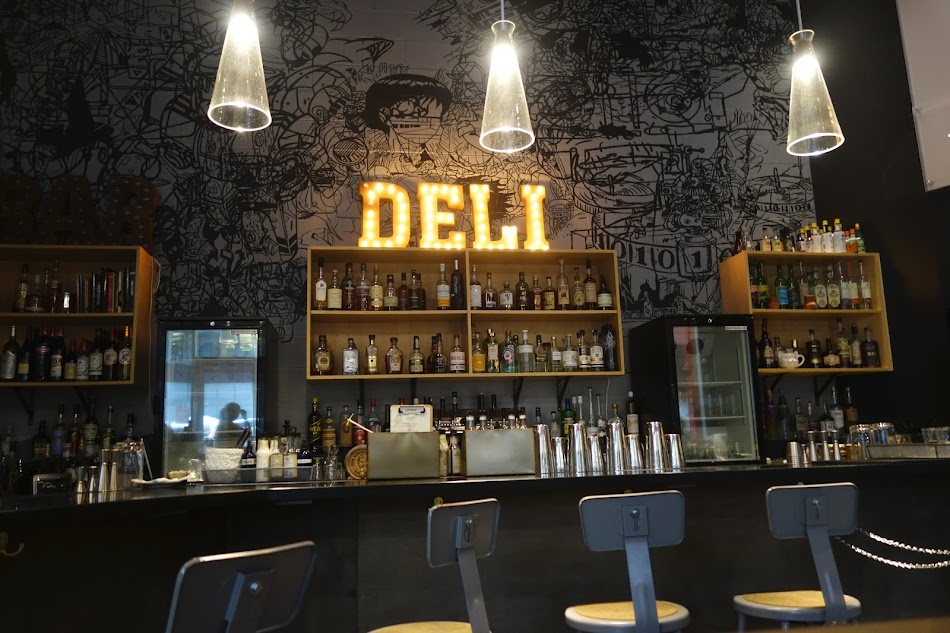 While we waited for a few of the girls to arrive, I checked out the breakfast menu. It's small, but as you'll soon see, everything on it is excellent. 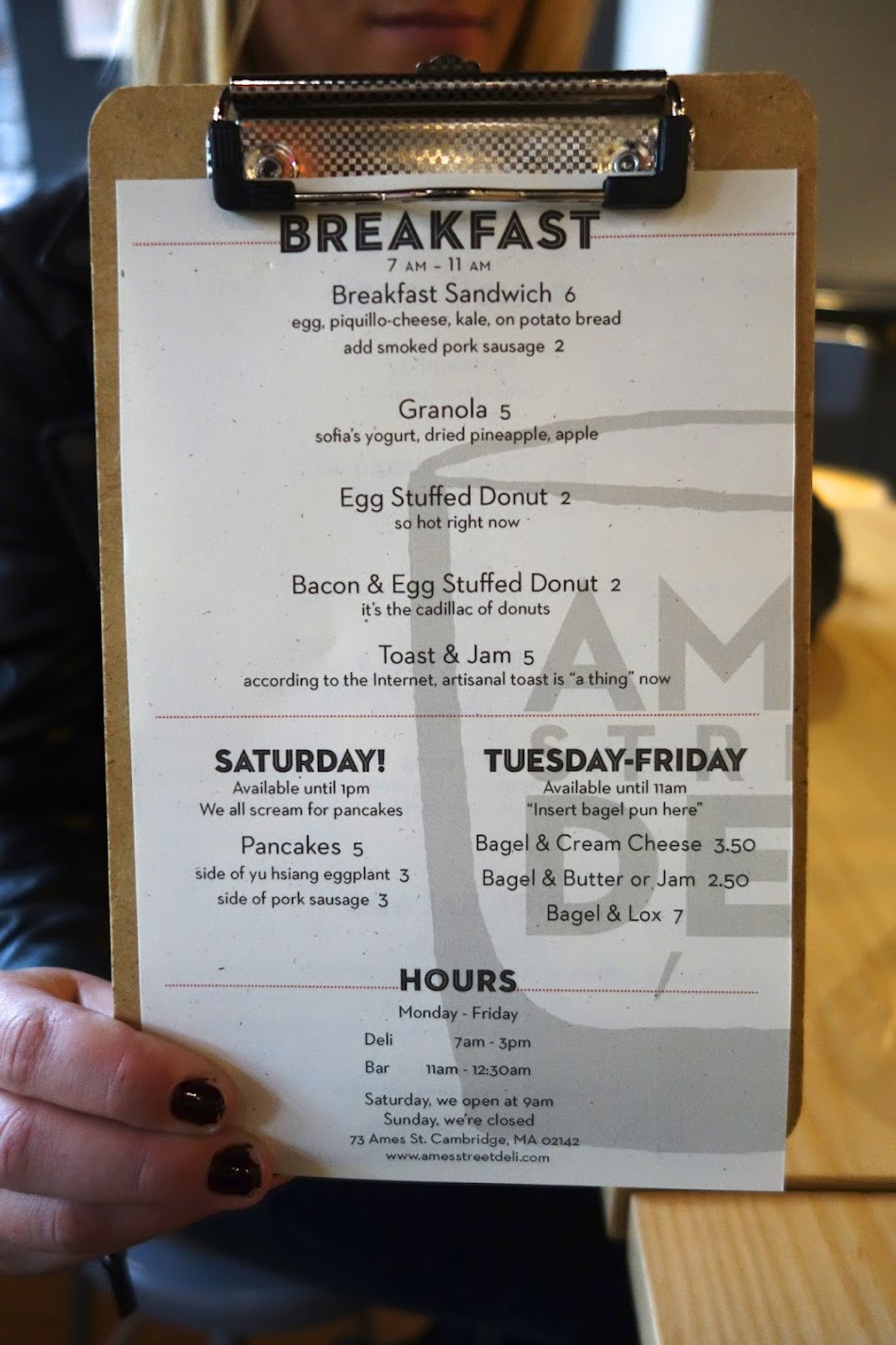 At breakfast time you order from the counter, which also doubles as the pastry display. Just as we were getting ready to place our requests, the goodies got restocked. 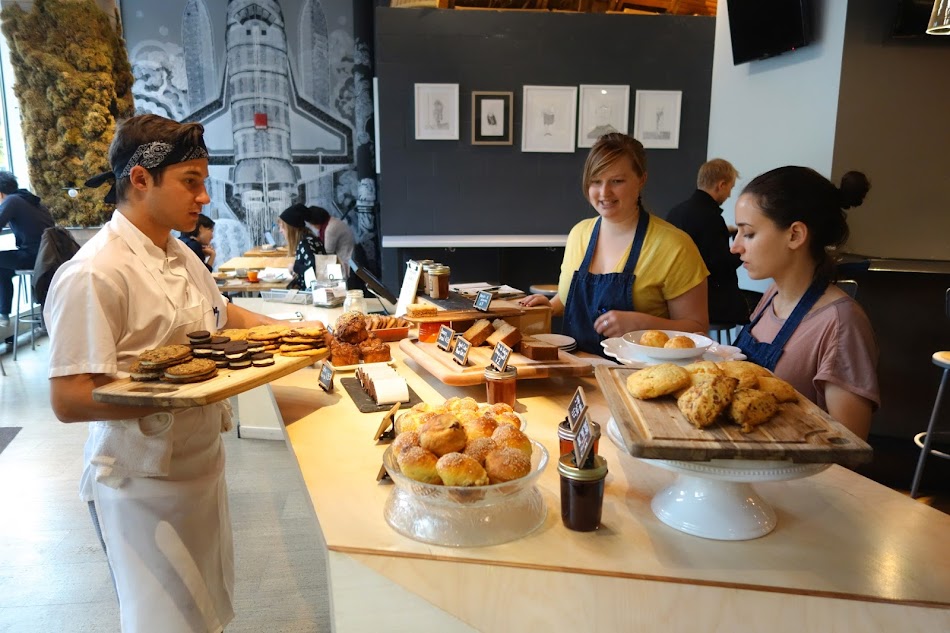 Ames Street Deli has tons of grab and go items, including this perfect looking everything bagel. 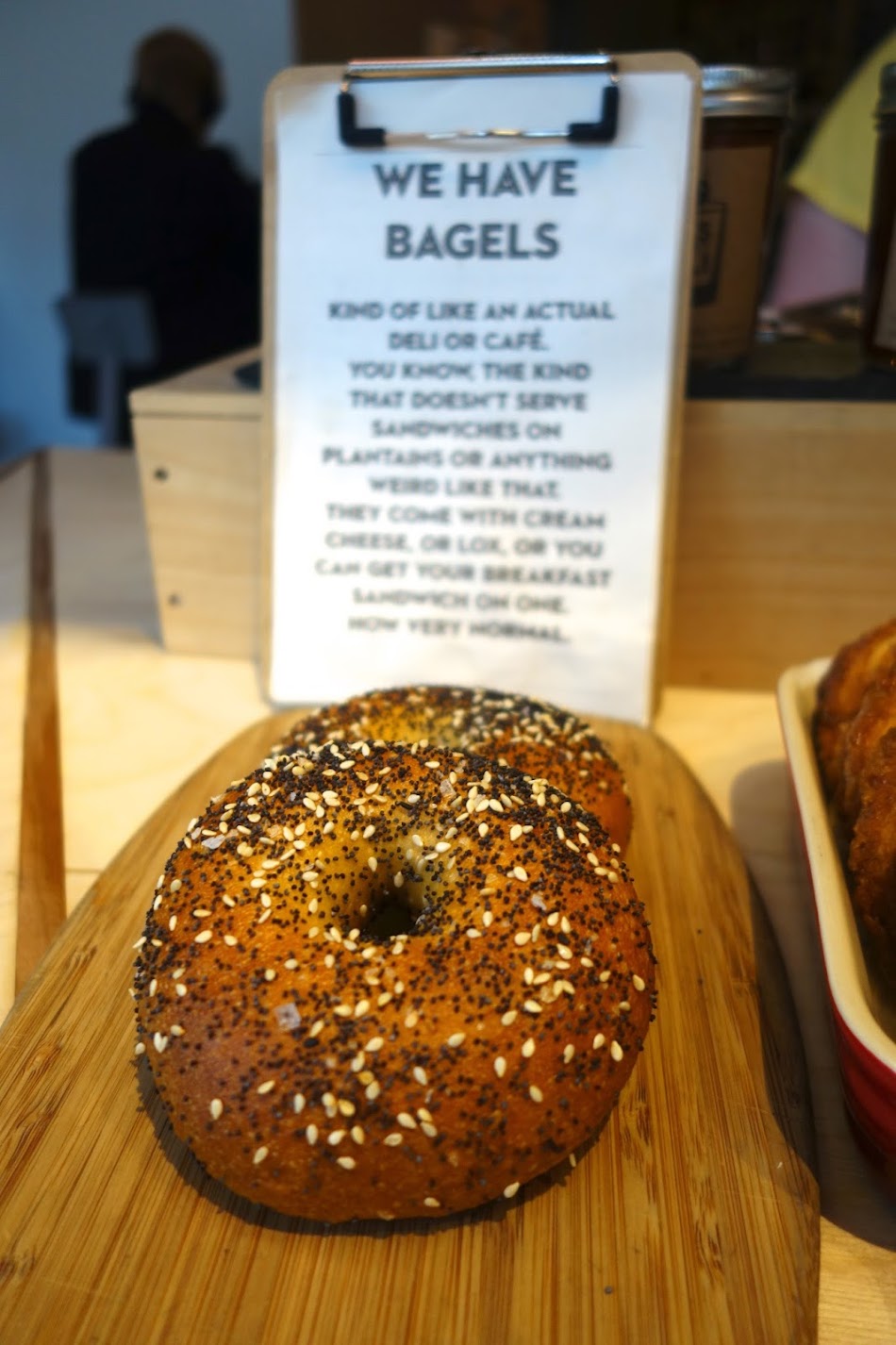 They have fun and unique pastries like chai elephant ears. 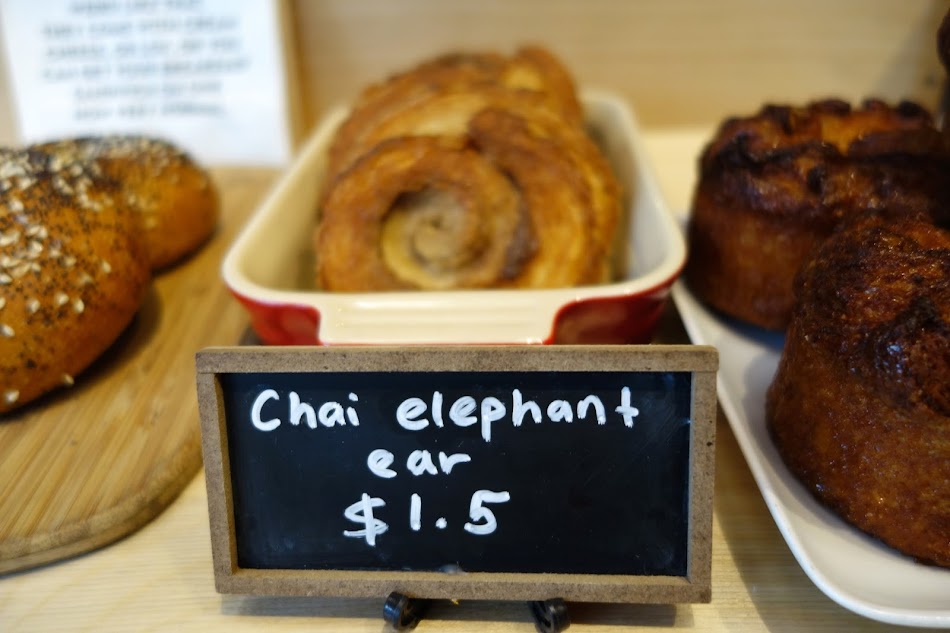 The sweet smell of their chocolate brioche was intoxicating. 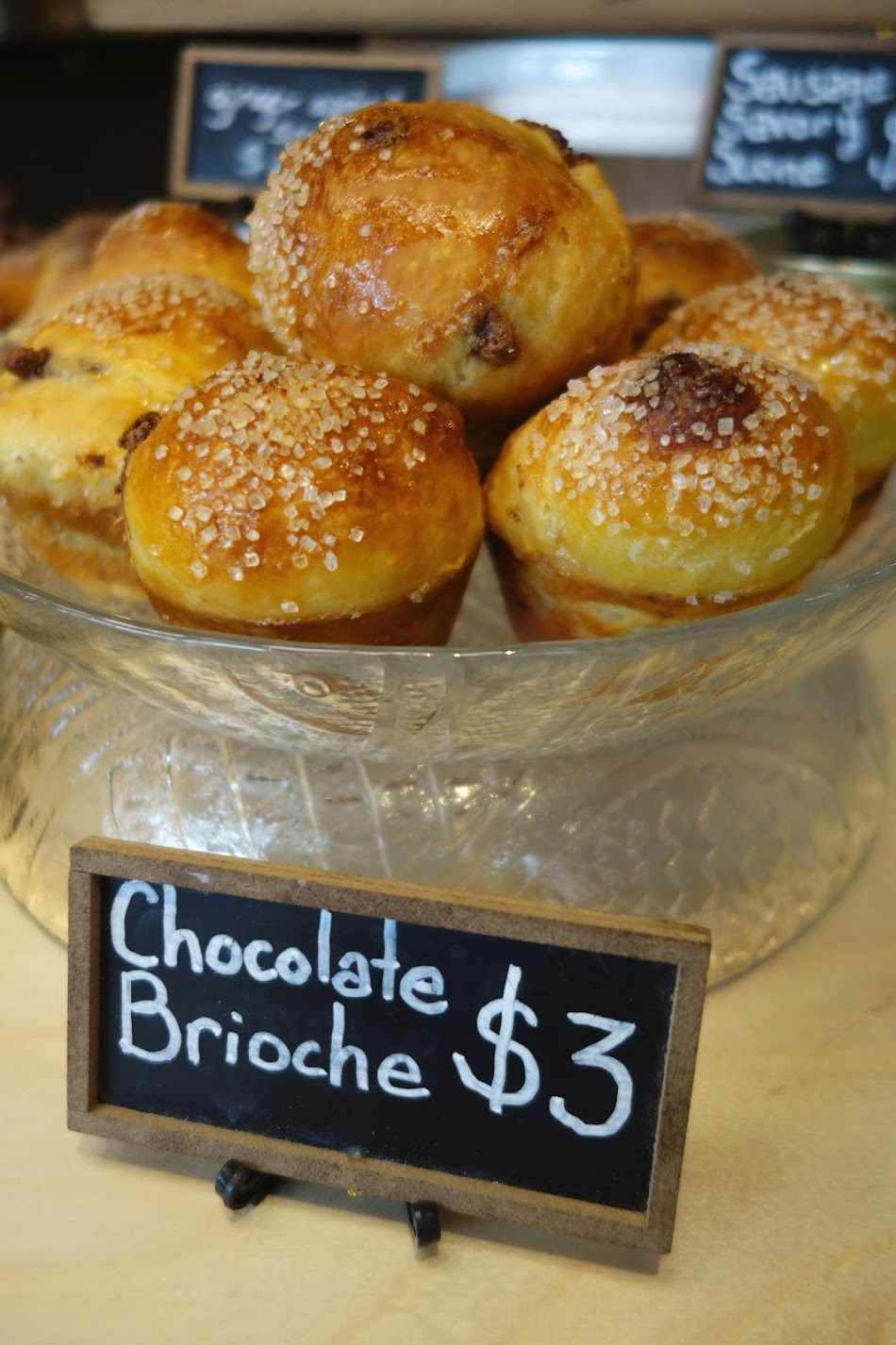 They also had a board topped with cookies. Any place that serves dessert at 9:00am is fine by me! 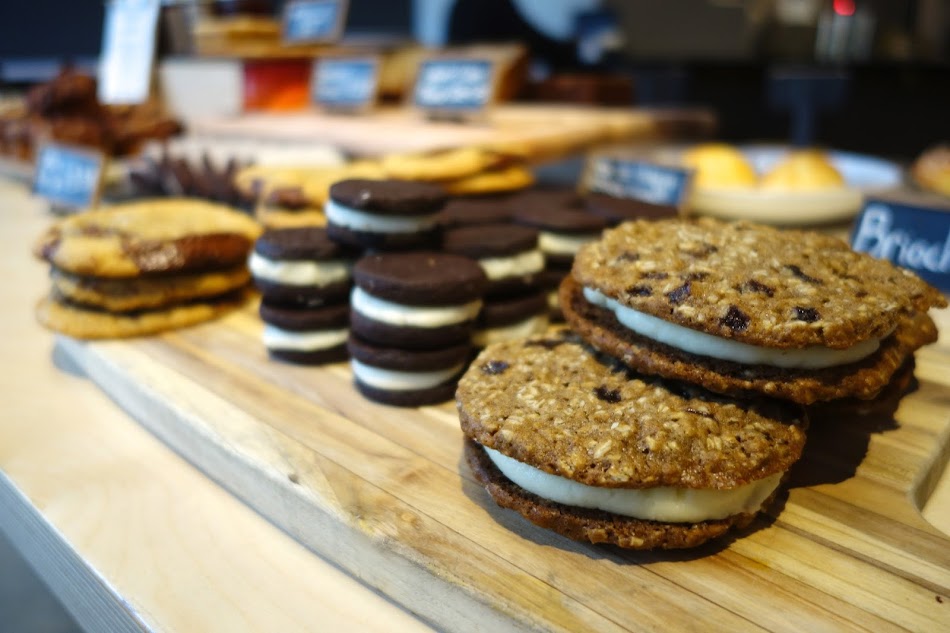 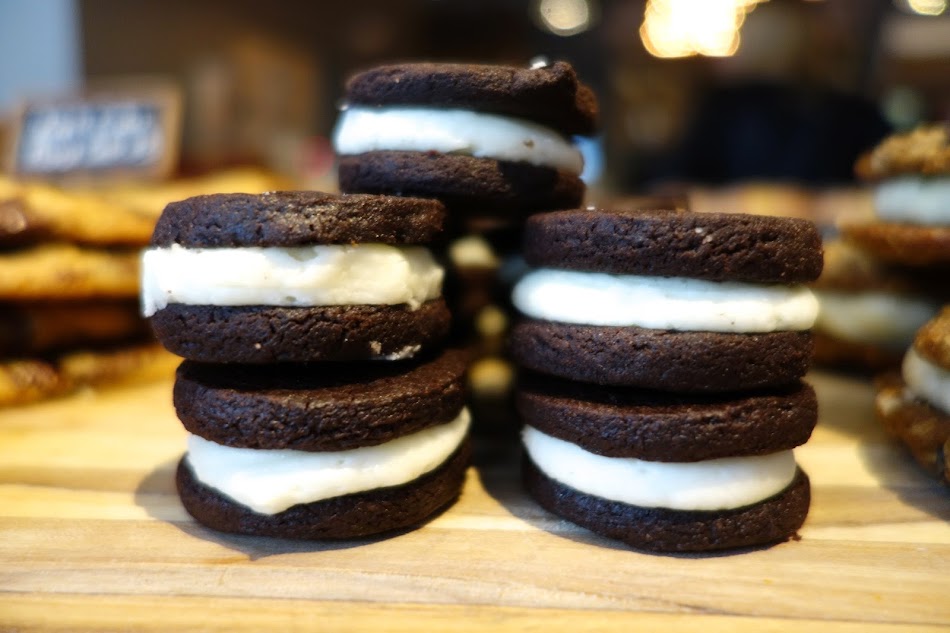 The sight of this ooey gooey chocolate chip cookie had me drooling. 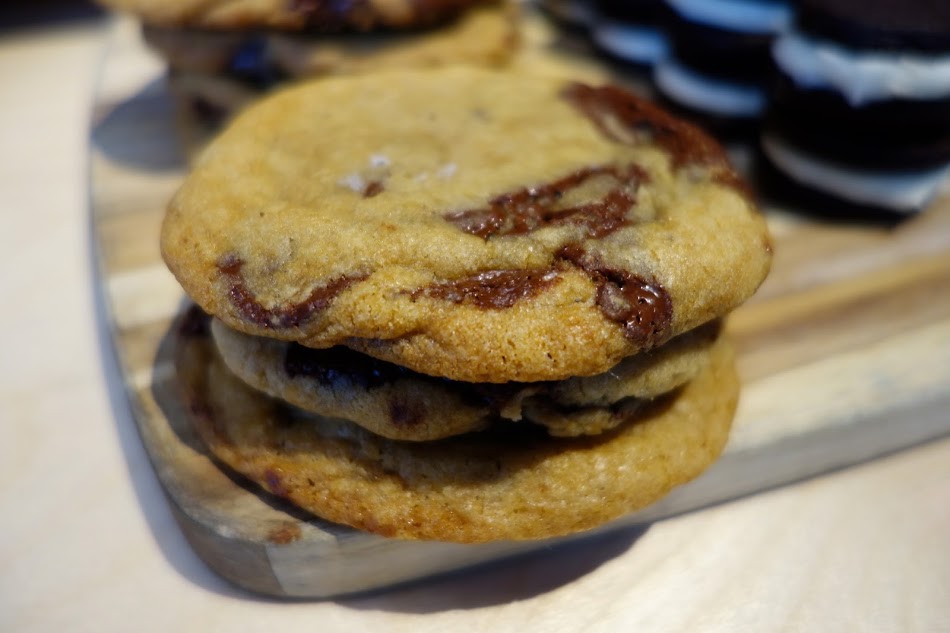 The first decision I made was to warm up from the chilly rain with a chai latte. I discovered I like chai lattes on a trip to Israel two years ago. Not everyone knows how to make a great one, but this version was top notch. 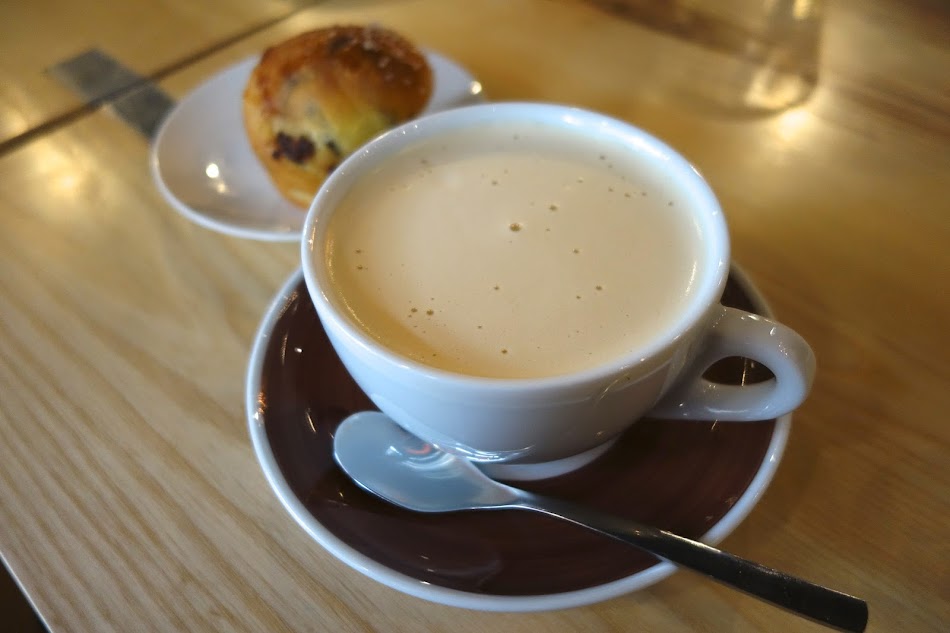 Two of the girls ordered egg stuffed donuts to start. Yup, you read that correctly. 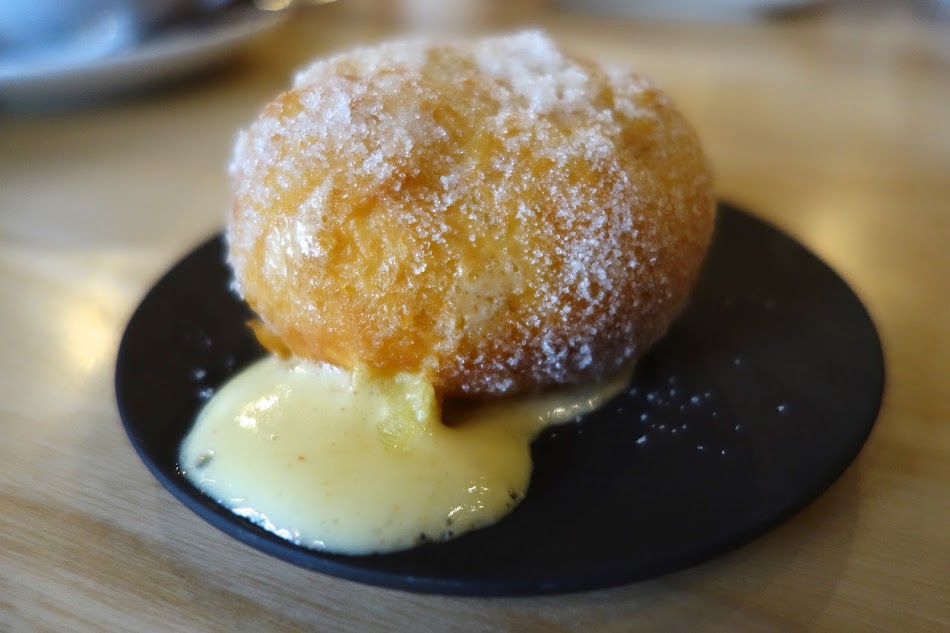 You can get the egg stuffed donut with just eggs, or you can ask for what they call the "Cadillac of donuts" which is wrapped in a slice of bacon. 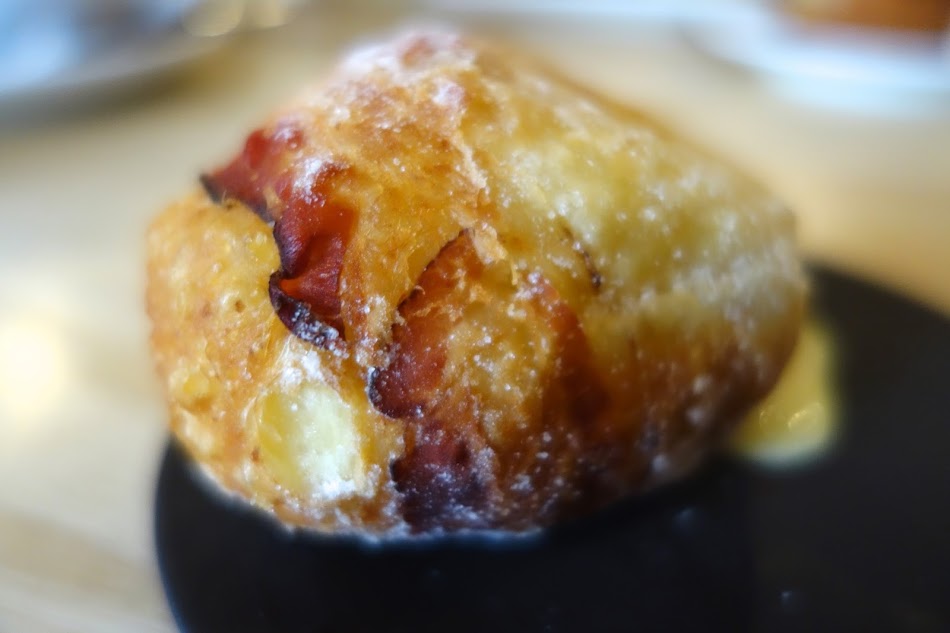 One of the girls ordered the toast and jam which was actually a huge portion for just one person. Look at that slab of butter! 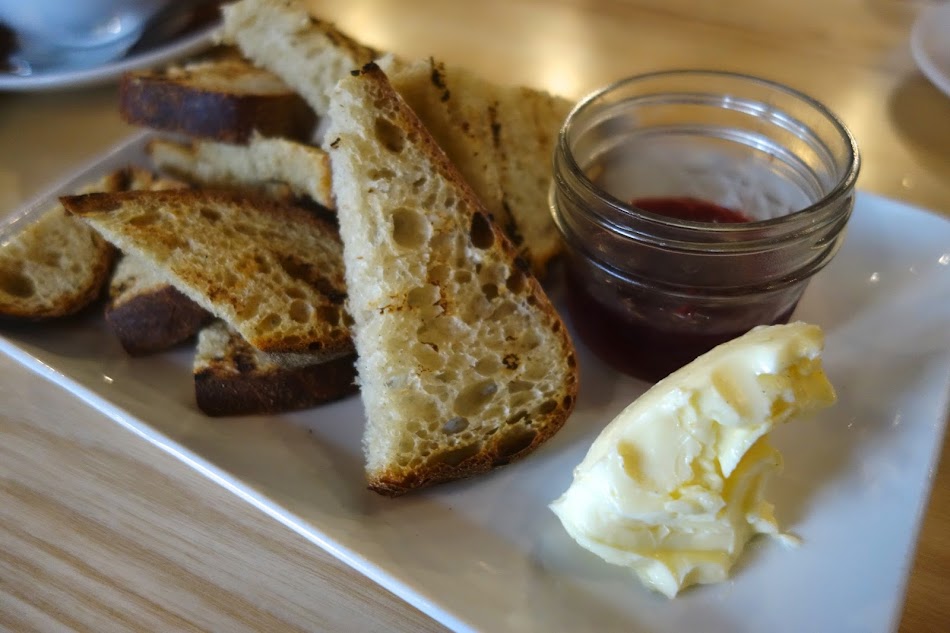 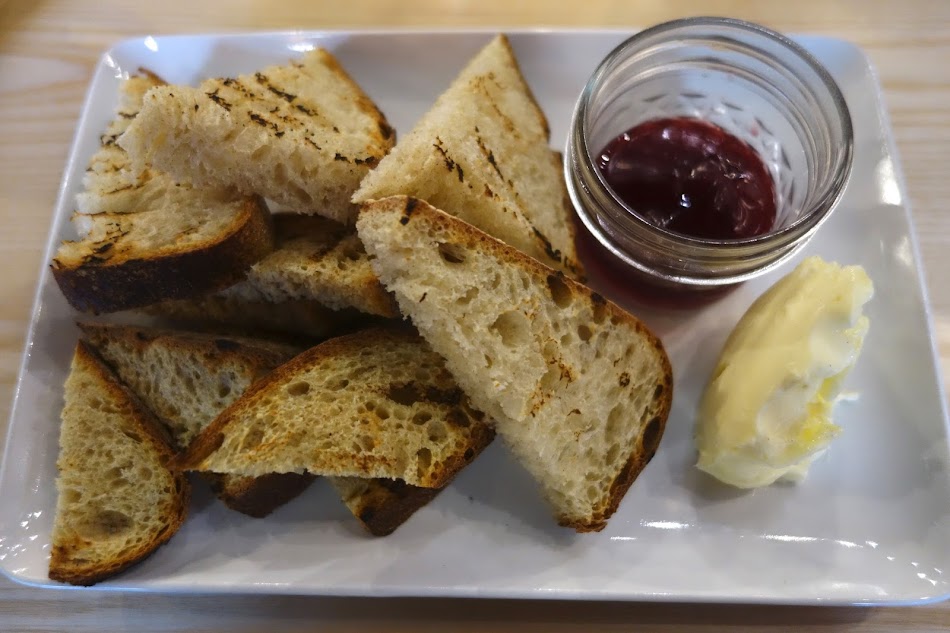 Across from me, another girl ordered the granola, which came topped with an expertly sliced apple. 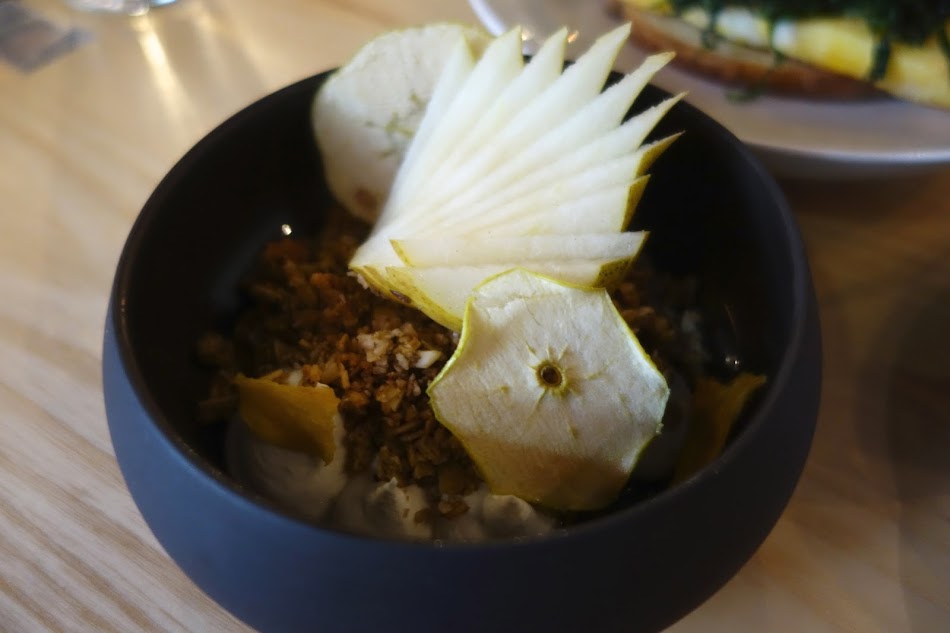 Next to me, a friend ordered the bagel and lox, which was an everything bagel stuffed with cream cheese, lox and capers. How amazing does that look? 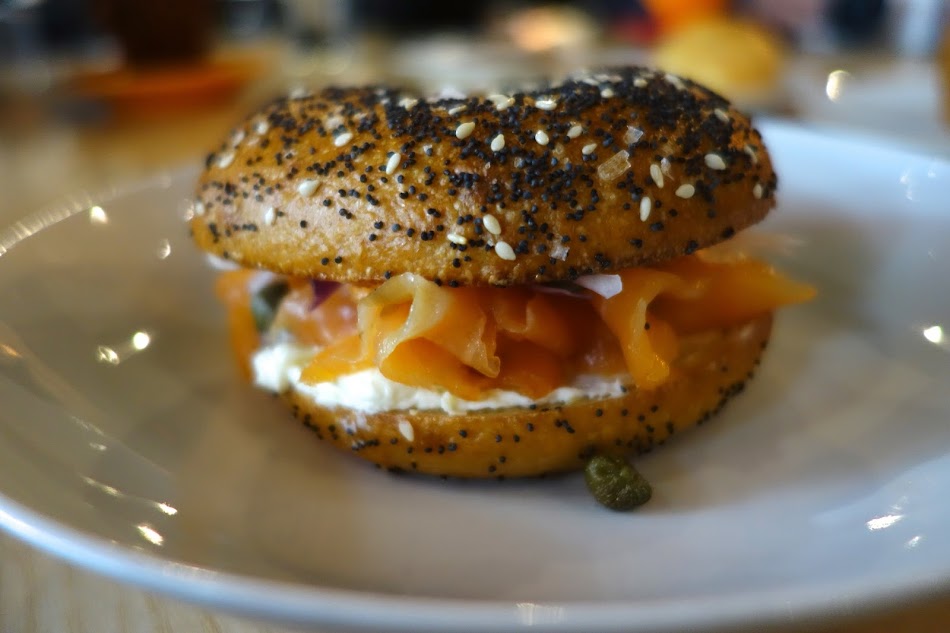 I went with the breakfast sandwich. It was egg, piquillo cheese and kale in between two pieces of potato bread. 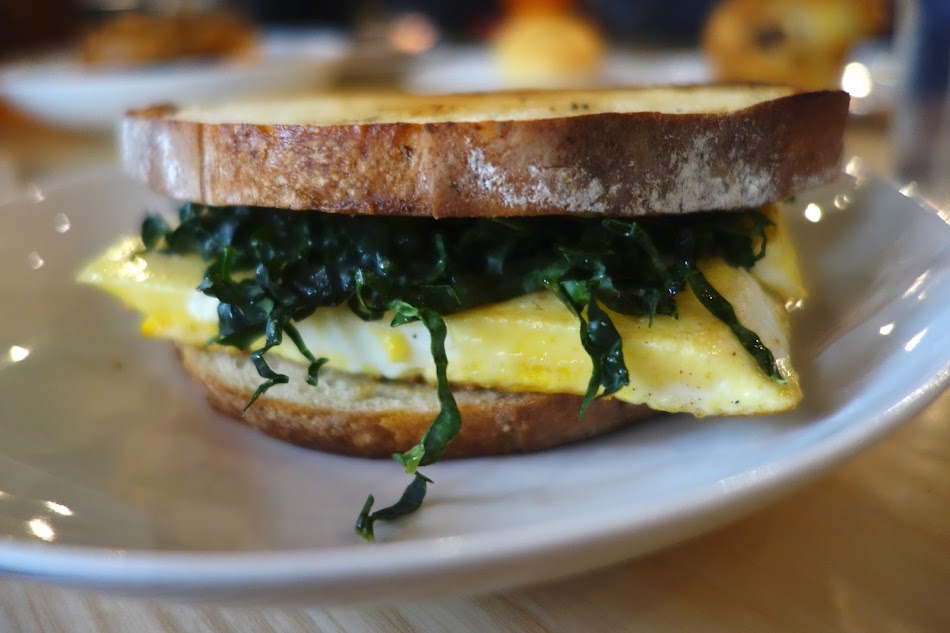 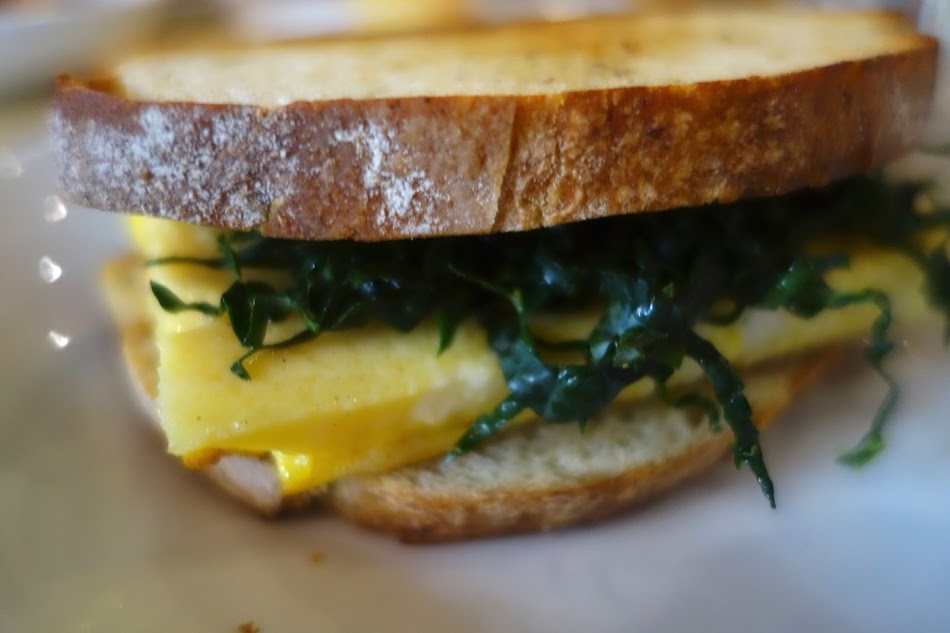 I have never had kale on a breakfast sandwich before. Seems like an oxymoron.

Overall, I was super impressed with the breakfast at Ames Street Deli. It was a very relaxing place to start the day, the latte warmed me from the inside out and each treat I nibbled was super yummy.

Though we sat at a high top table in the bar area, you can also sit in the front windows for more of a cafe/coffee shop vibe. The rocket ship on the wall is a nod to all the technology companies and MIT students in the area. 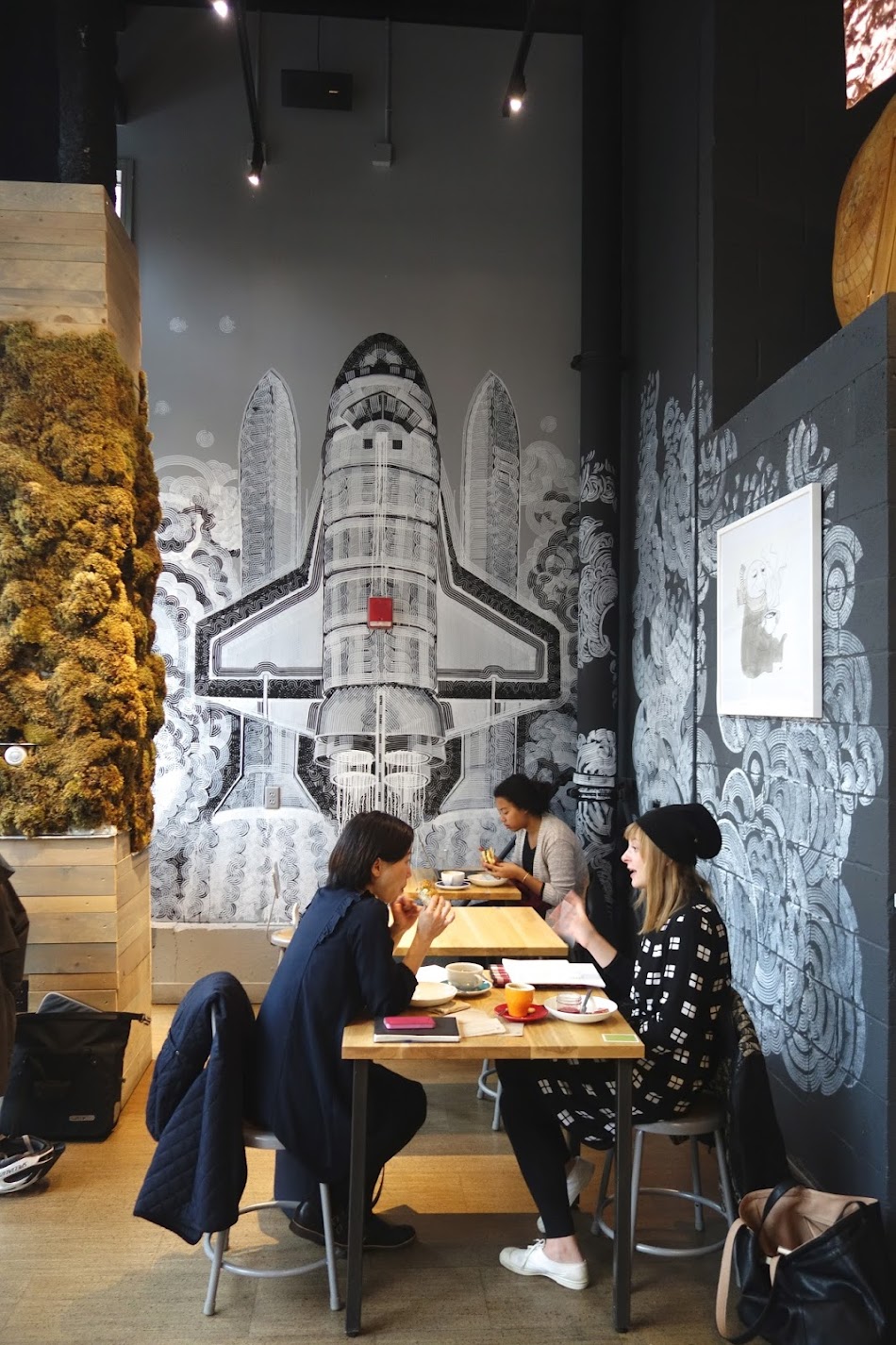 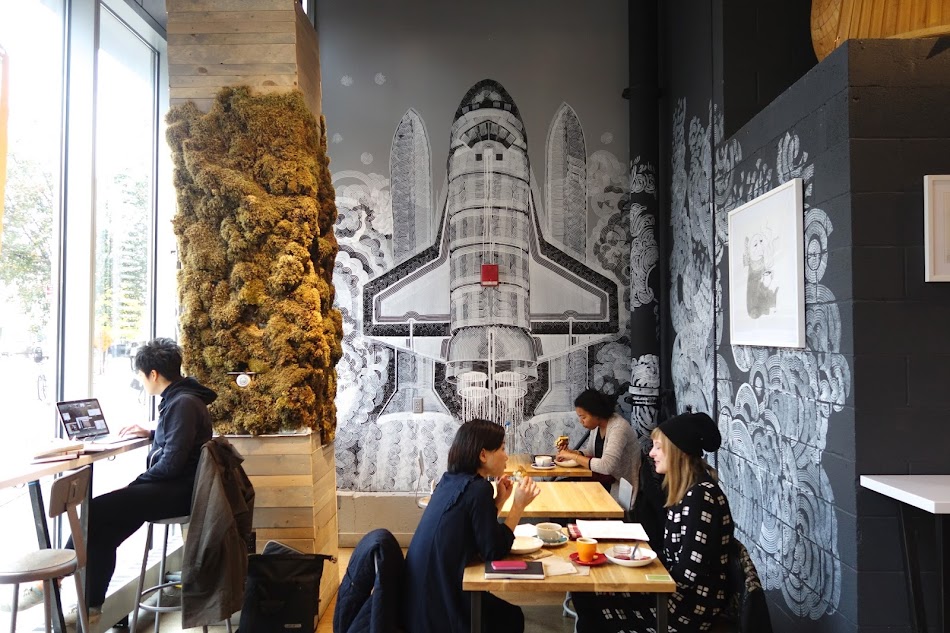 They open at 7:00am, if you are looking to make a stop here part of your morning routine.

Ames Street Deli is part of a group of restaurants that includes Study (next door), Journeyman and backbar.

*Though my meal at Ames Street Deli was complimentary, opinions are 100 percent my own. 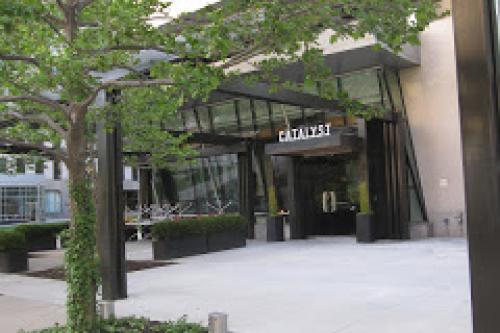 Over the past few years Kendall Square in Cambridge has experienced an explosion of restaurants. I've been keeping my eye on the new hot spots, however Kendall isn't really convenient for me to get to from home or from work. When looking for a place to toast to a friend's 30th birthday, Kendall seemed a good meeting place as I was coming from downtown and she was coming from Winter Hill in Somerville. After brainstorming a few locations, we decided to meet at Catalyst. 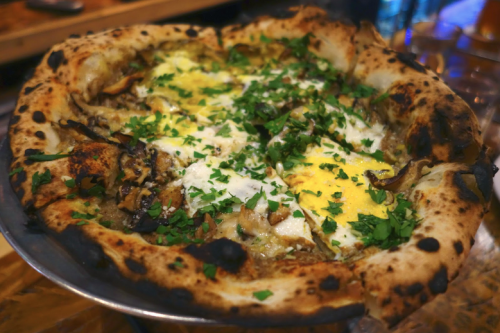 All month long we've been talking about how to celebrate your single status on Valentine's Day. First with beautiful and hilarious cards from Posh + Prep, then with a gift guide for all the single ladies, and yesterday with fierce looks for Galentine's Day. 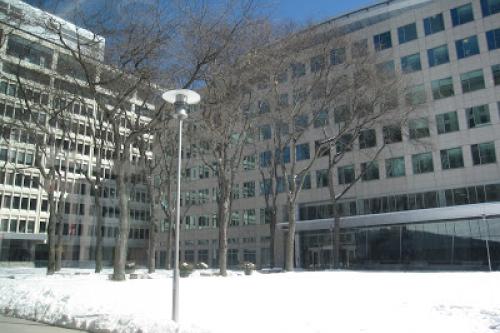 The only thing better than trying a new restaurant for my favorite meal of the week (brunch), is trying it with a new friend. My brunching pal and I met back in October through work and we've been having a blast around the city together ever since.