Dining Out: The Old Man & The Sea

As you know, I just returned from a week and a half in Israel. I had an incredible trip and I am giddy just thinking about all the adventures I get to share with you from my journey.

On my first day in the country, I went with a friend to Yafo (also known as Jaffa). Being in Yafo feels like experiencing a time warp. There are stone streets, winding, narrow alleys and there is a calmness and serenity that you won't find in any other neighborhood in Tel Aviv.

Yafo is home to many historic landmarks, including the oldest mosque in Israel. 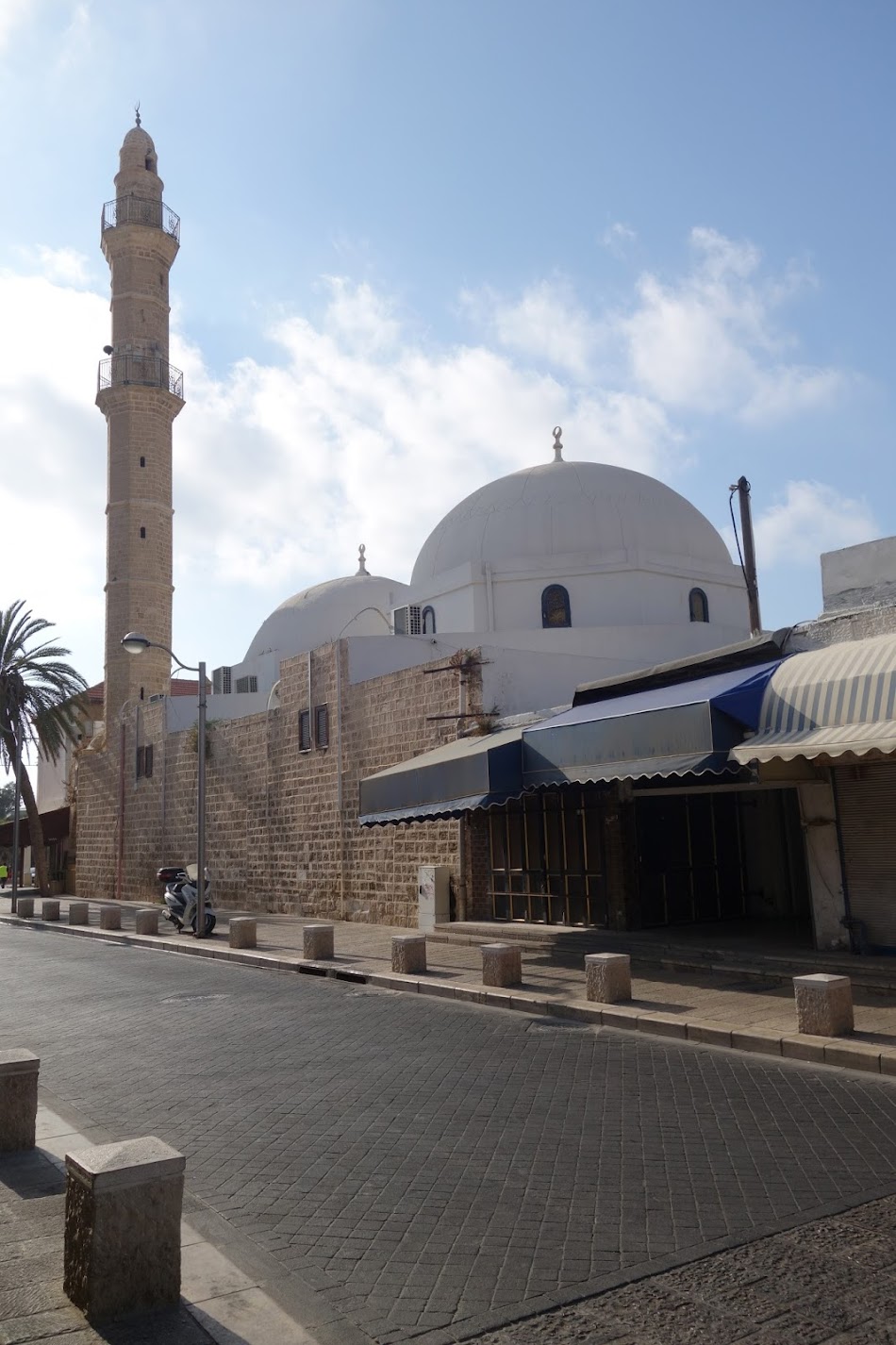 I love wandering through the sun soaked streets and peeking into the restaurants and shops. 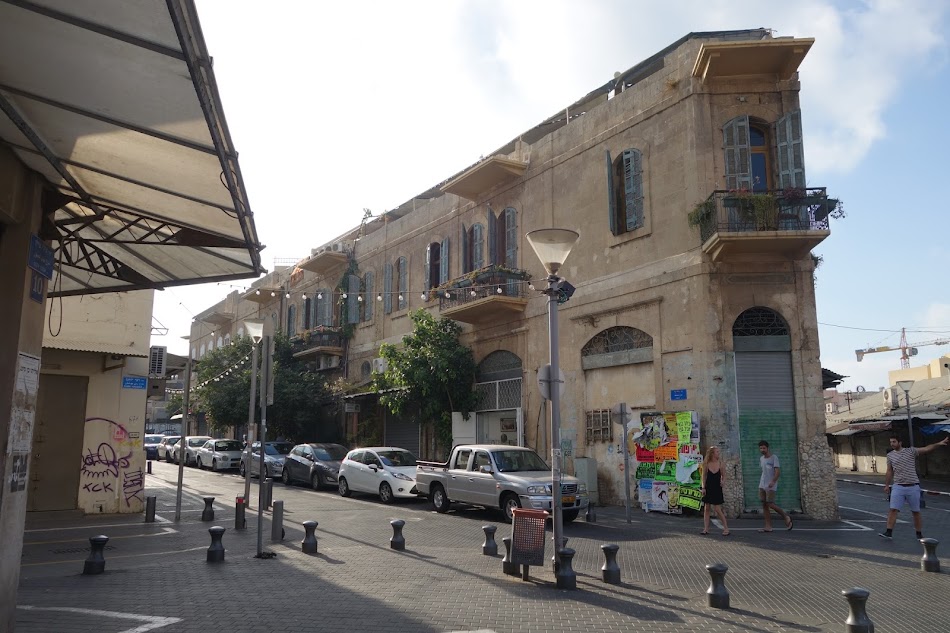 In the center of Yafo is a public park, set high on a hill. From the park you can see all of Tel Aviv down below. There is nothing but ocean as far as the eye can see. 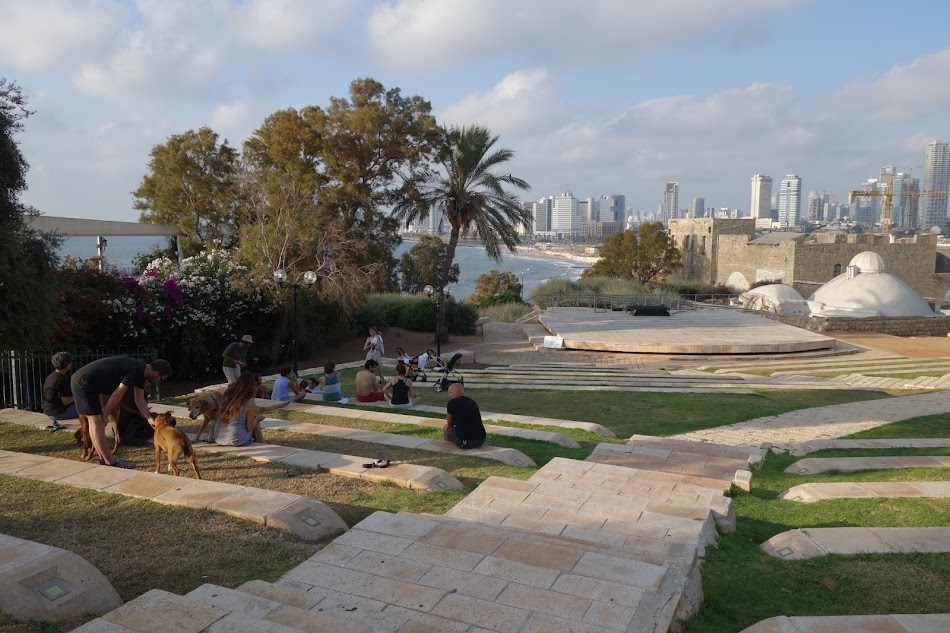 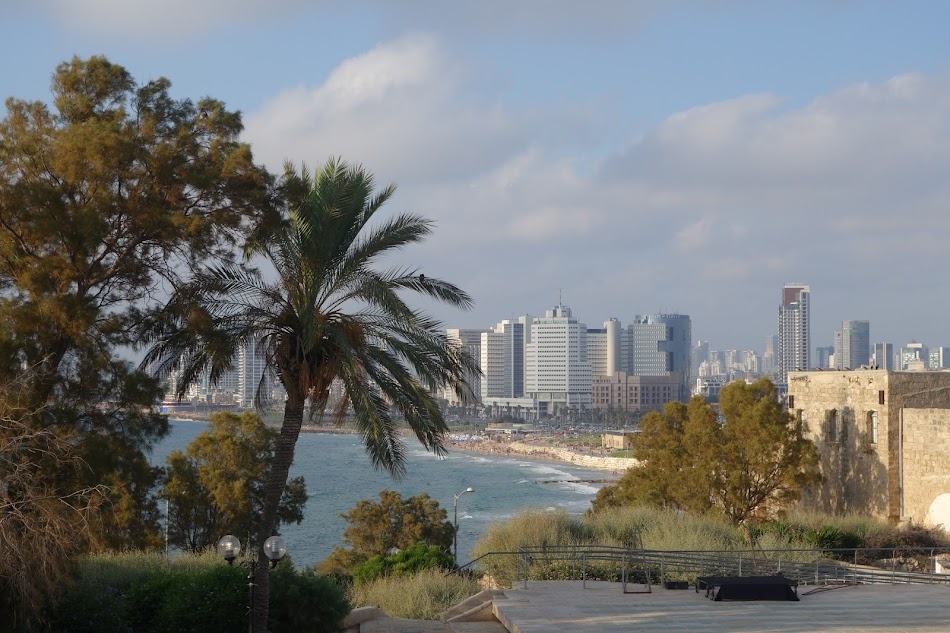 When you walk down the hill, you're steps from the Yafo port. It's a beautiful place to walk, people watch and enjoy a meal. 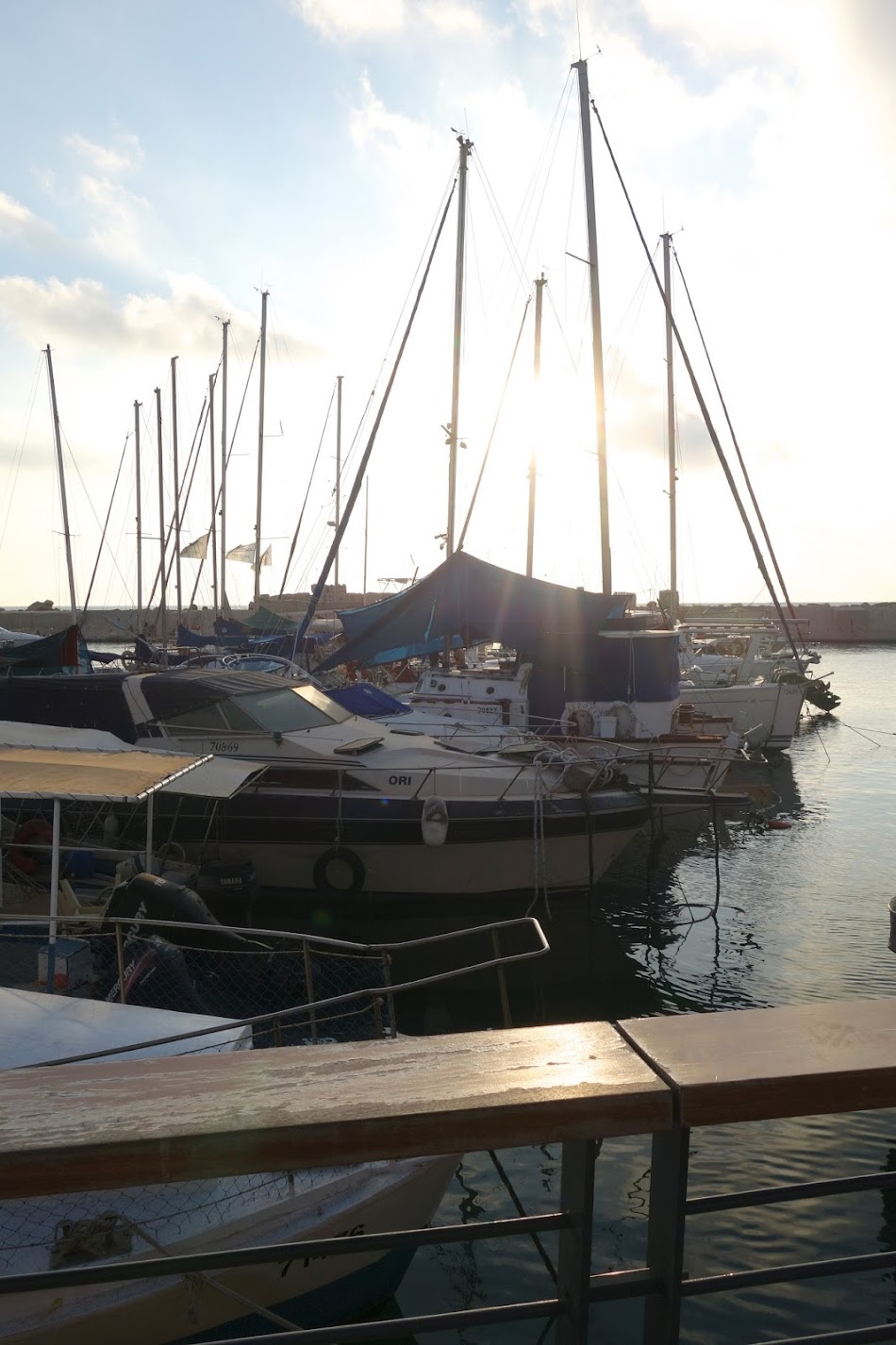 On that very first night, after the sun went down, we asked for a table for two at The Old Man & The Sea on the Yafo boardwalk. 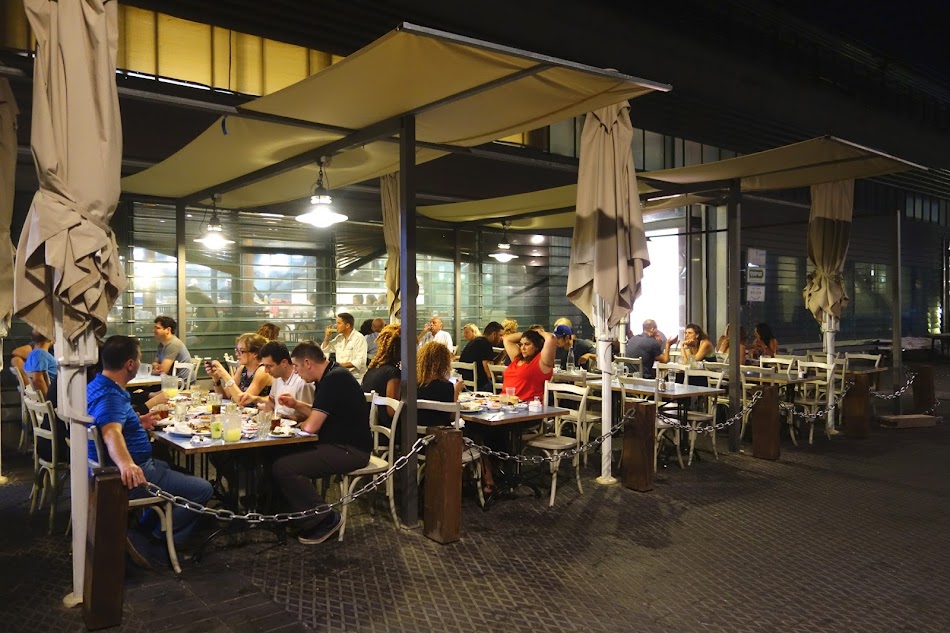 The tables are in an ideal spot for breathing in the ocean air and watching the world go by.

I couldn't help but notice all the people walking their dogs along the boardwalk, probably because I was missing my own pup. In addition to the dogs, the port also has an insane amount of stray, whining cats. Well, the whole country really, but it was particularly bad in the port.

Once seated, I noticed the napkins at each of our places had the restaurant's name in Arabic, Hebrew and English. 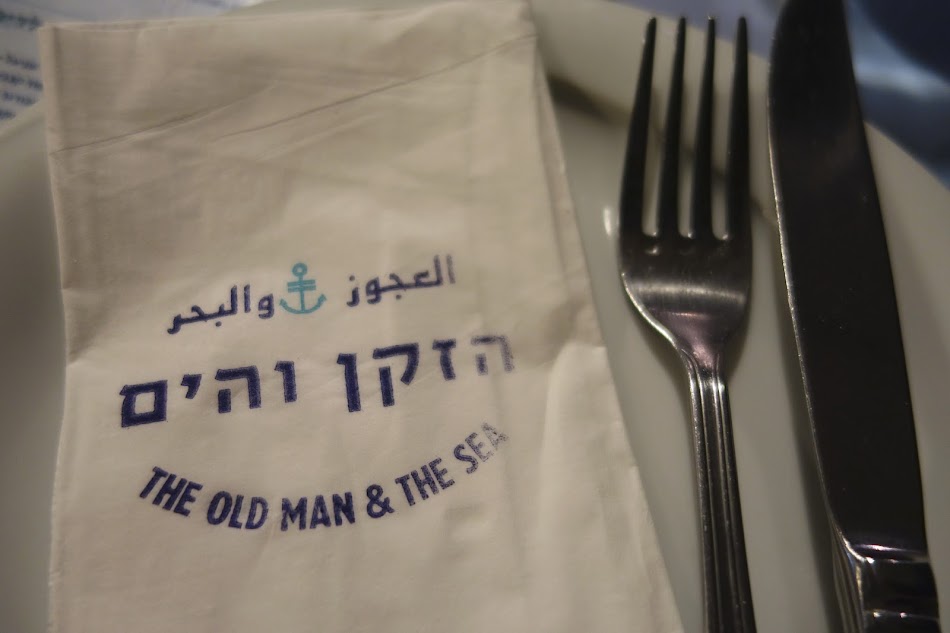 We started with The Old Man & The Sea's signature spread, an array of salads served with hummus and pita. 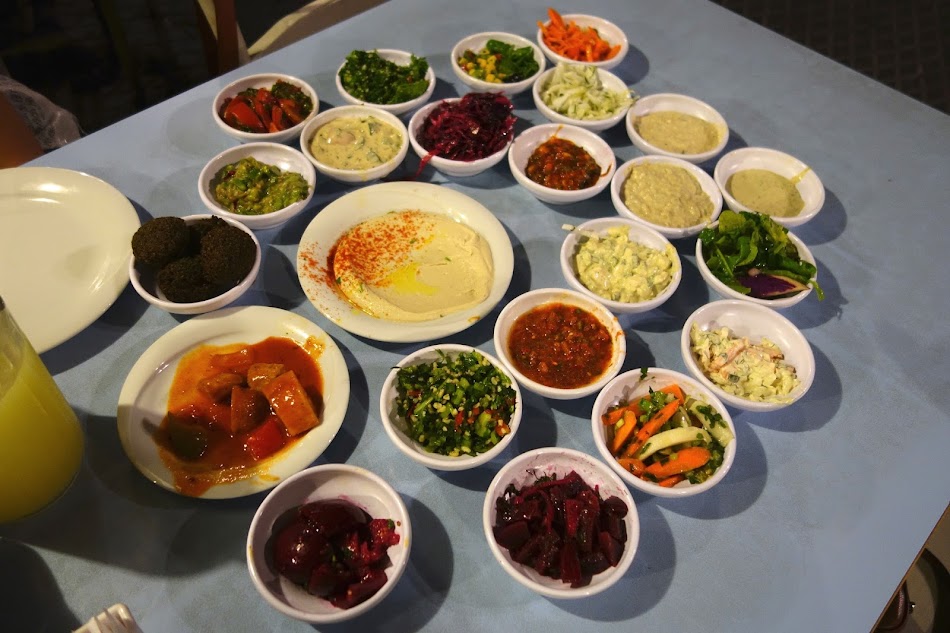 What's even more impressive than the quantity and variety of the salads is the speed at which the server zips them off the tray and onto your table. It took him 30 seconds, maybe? 60 seconds, tops. 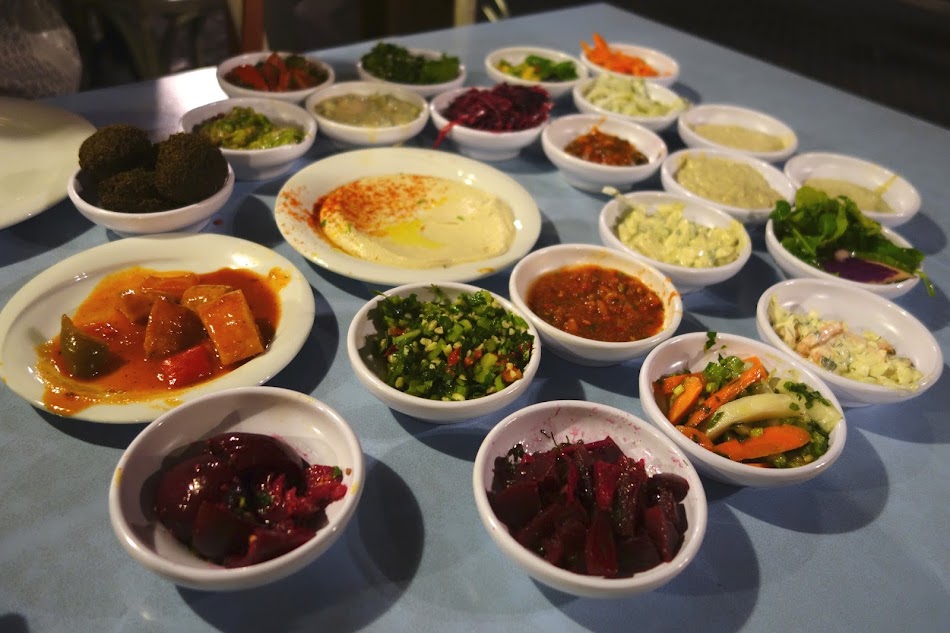 Every single one of these salads is vegetarian (score!). They are meant purely as appetizers and are intended for sharing. They don't tell you what anything is, so you just have to pick up your fork and explore!

Of all the salads we sampled, my favorites were the egg salad, the tomatoes with dill and the carrots with cranberries. 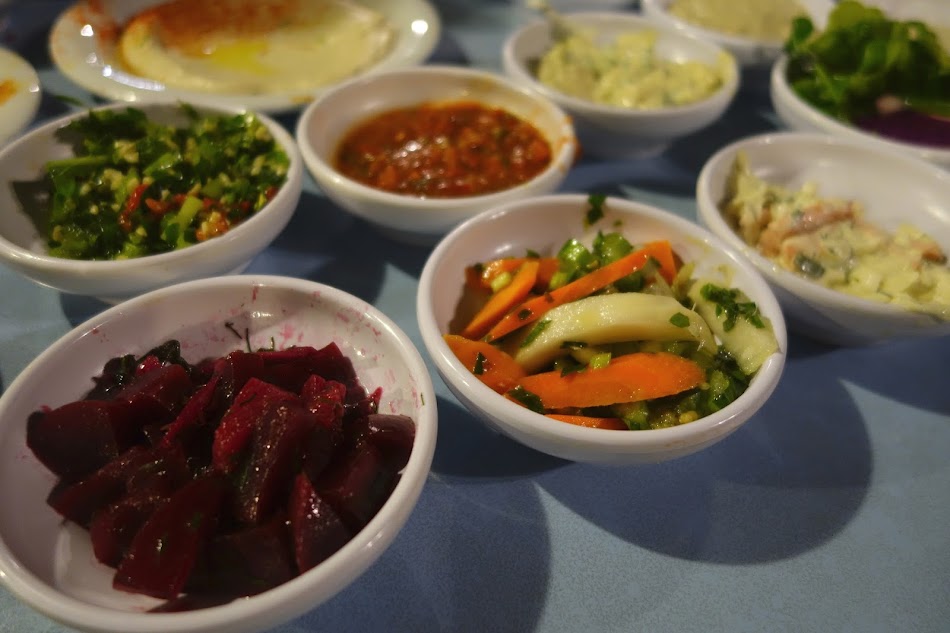 The egg salad was really the star. It was super creamy, seasoned with fresh herbs and tasted amazing on the freshly baked pita bread.

Speaking of the pita bread, this is hard to tell from the photo, but each piece was the size of a dinner plate! The pita was blistered from the oven and was perfect for scooping up hummus or serving as a vehicle for turning each salad into a mini wrap. 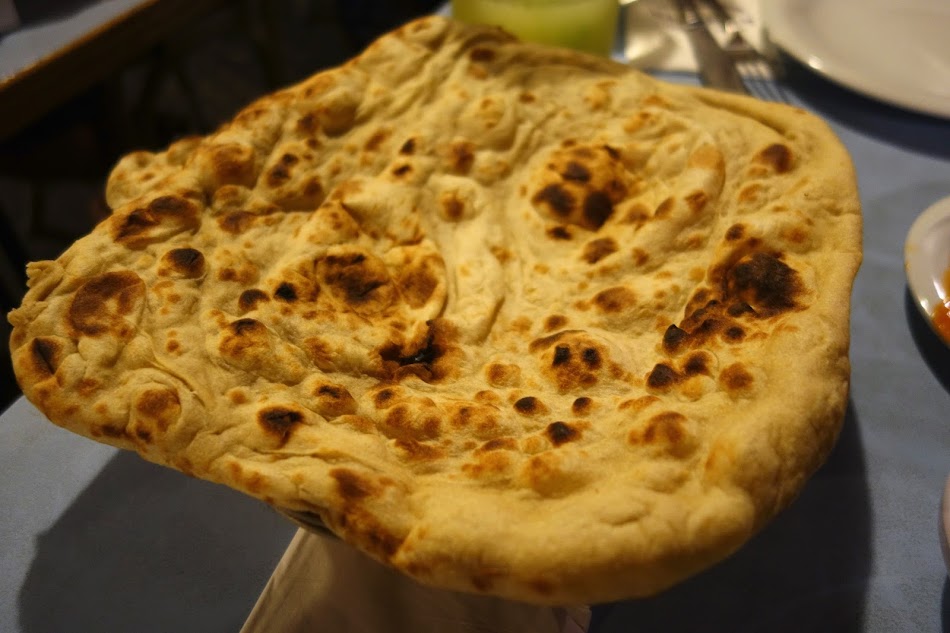 After taste testing all of the salads, the creamy, smooth hummus, the pita and downing a full pitcher of lemonade, we were stuffed! Most people come to The Old Man & The Sea for the fresh fish, but we never even made it to the fish course.

To help digest our salad smorgasbord, we each ordered a cup of hot tea. Almost all drinks in Israel are garnished with fresh mint (which I love) and that included our tea. 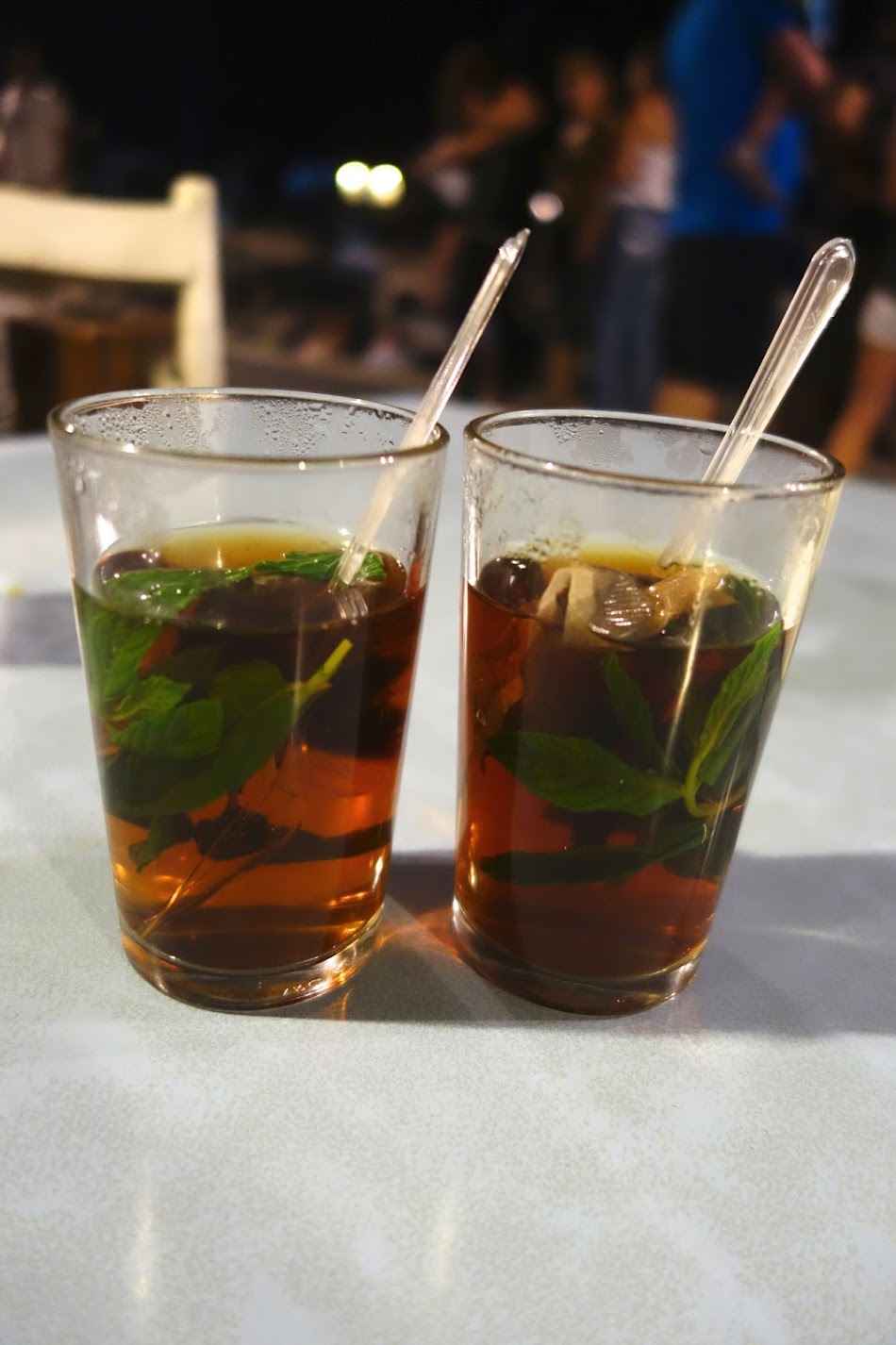 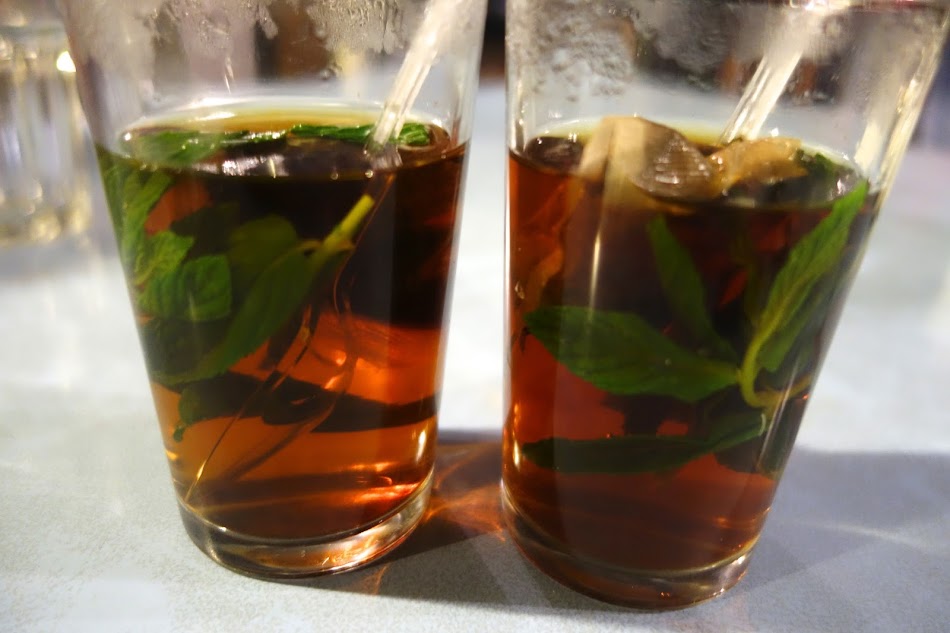 Even more than all the veggie choices, the best part of this meal was the atmosphere. Sitting on the boardwalk, breathing in the salt air, listening to the music coming from the street performers - it was a feast for all the senses.

For two people, that cornucopia of salads (plus hummus, pita bread and a pitcher of lemonade) is just 118 shekels, which is $29.50 dollars. Yes, people. Less than $30 dollars for all that! And the best part? It's unlimited. They will keep refilling everything until you say "stop."

Have you ever been to Yafo? Do you have a favorite place I should add to my list for next time?

that salad spread is unreal!! love that everything was vegetarian - you must have been in heaven

I was in total salad and veggie heaven! Wish we could get a place like this in Beantown! 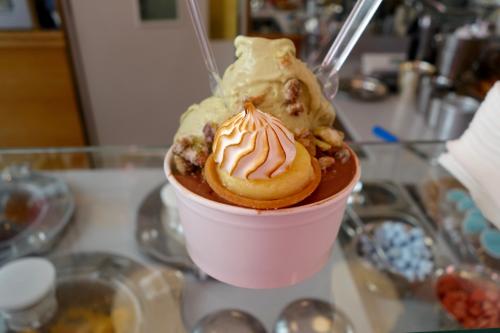 During my family's Israel trip, we had incredible luck with restaurants. We spent a few weeks gathering recommendations from family and friends on where we should dine out in each of the neighborhoods we'd be exploring. 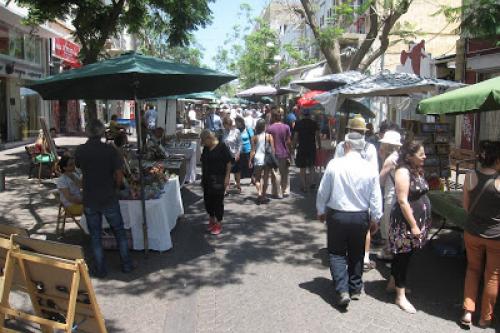 While I was in Israel in May I got to spend two full days exploring Tel Aviv. Of all the cities in Israel, Tel Aviv is the one I could actually see myself living in. It has all the best dining, art and music and it just so happens to be right on the beach. On my second day in Tel Aviv my tour guides were my aunt and my cousin. We knew we wanted to explore this area called Kikar Bazel (Bazel Square) so we parked and started walking around. We were in search of a brunch spot and noticed this place called Streets Bazel. We spotted it because it had a huge outdoor patio.