It's no secret that trying new restaurants is my favorite pastime. Earlier this year when the Mexican restaurant Besito opened in Burlington, MA I was intrigued, but unwilling to drive 35-40 minutes north on the highway after work. So imagine my surprise and delight to learn Besito had opened a second location in the Chestnut Hill Mall.

Every Thursday I have dinner with one of my best friends from college and two weeks ago she texted me and said, "This just in! I'm at the mall and Besito is officially open! We should go there on Thursday."

And so we did.

The entrance to Besito faces the parking lot on the Route 9 side of the mall. Weirdly, you can't get into the restaurant from inside the mall, you have to walk to out and then back in. 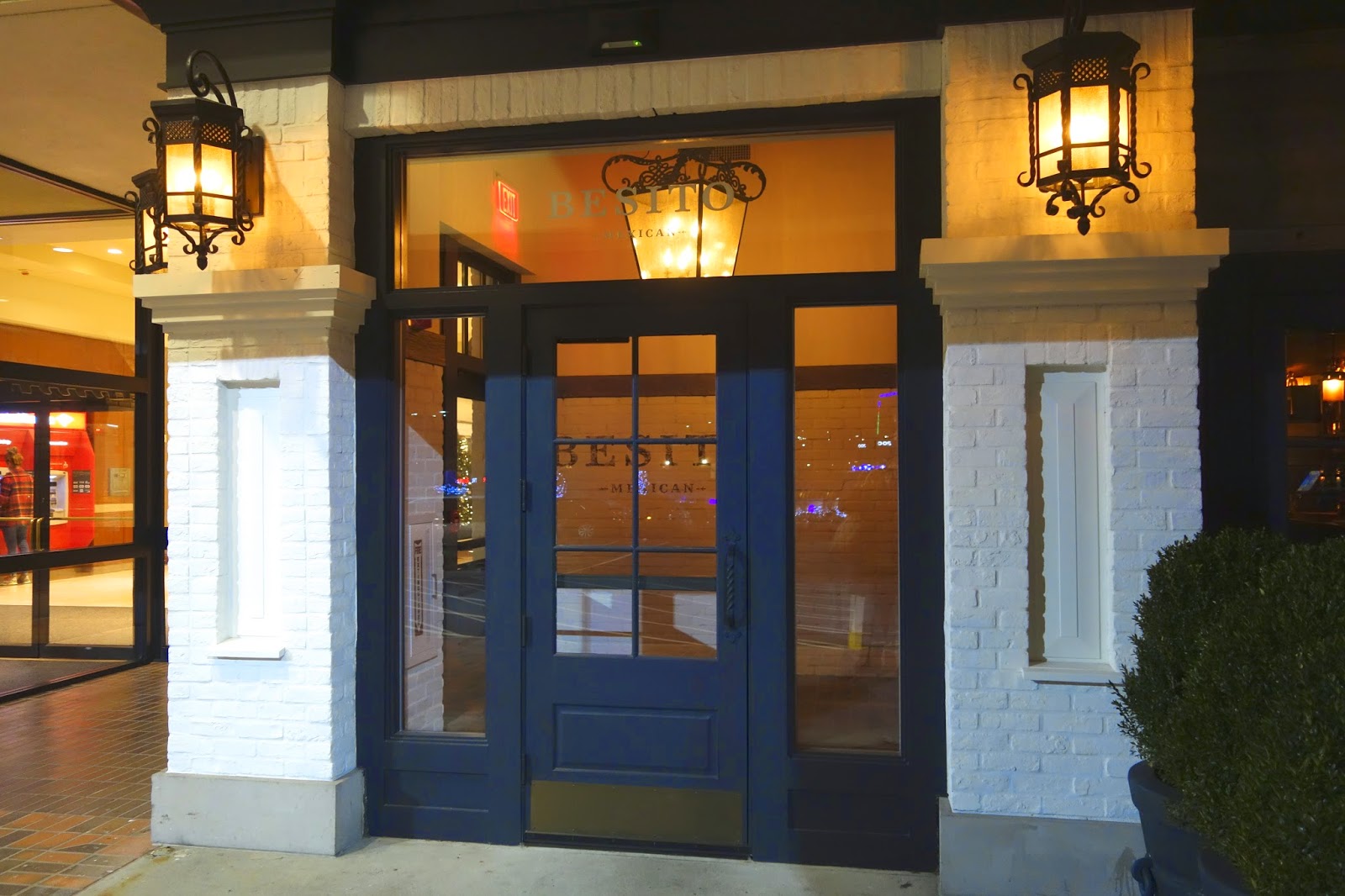 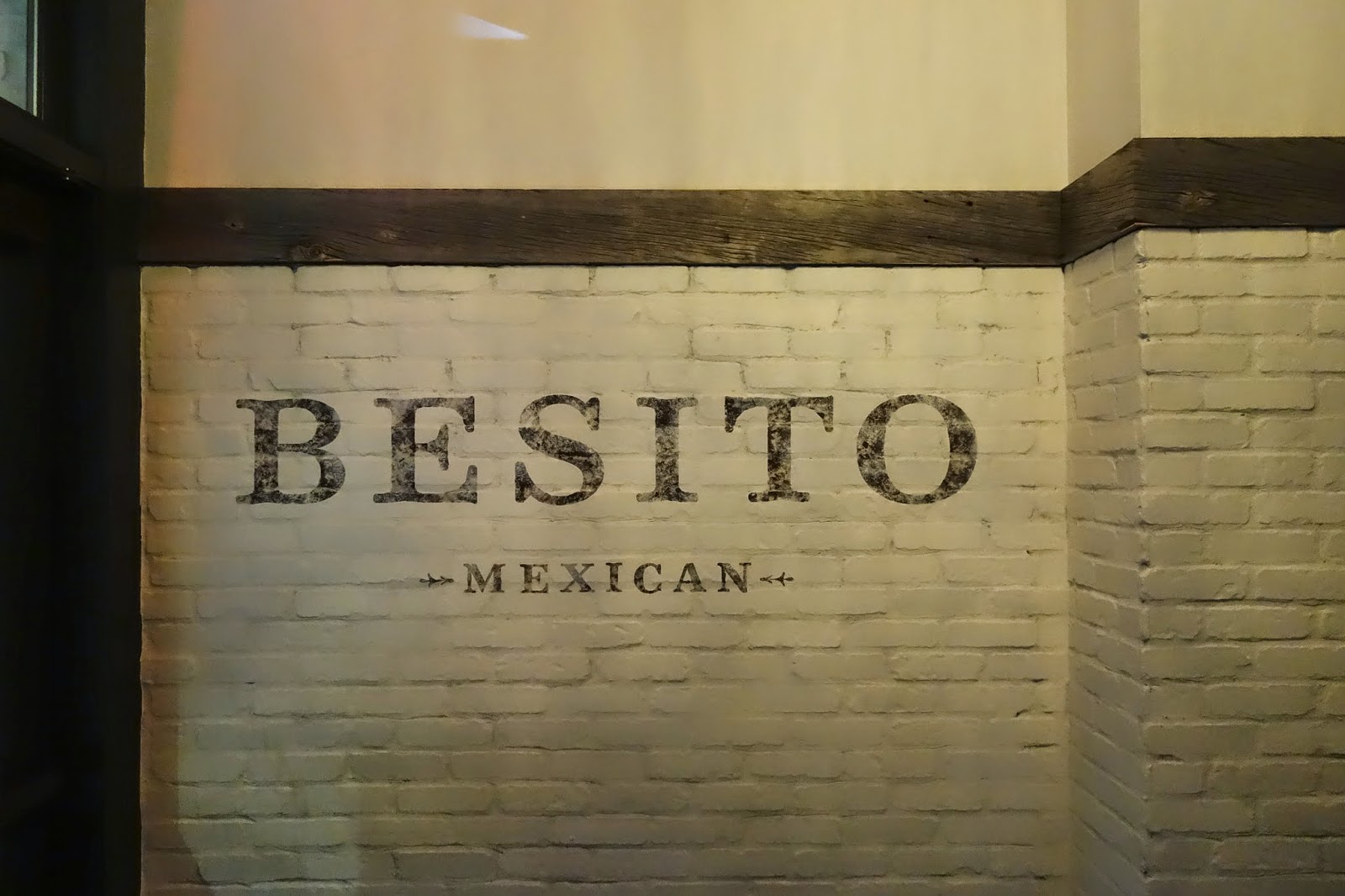 Though it was too cold to sit outside, Besito does have a beautiful patio. The space is lined with pristinely trimmed hedges and kept toasty warm by an outdoor fireplace. 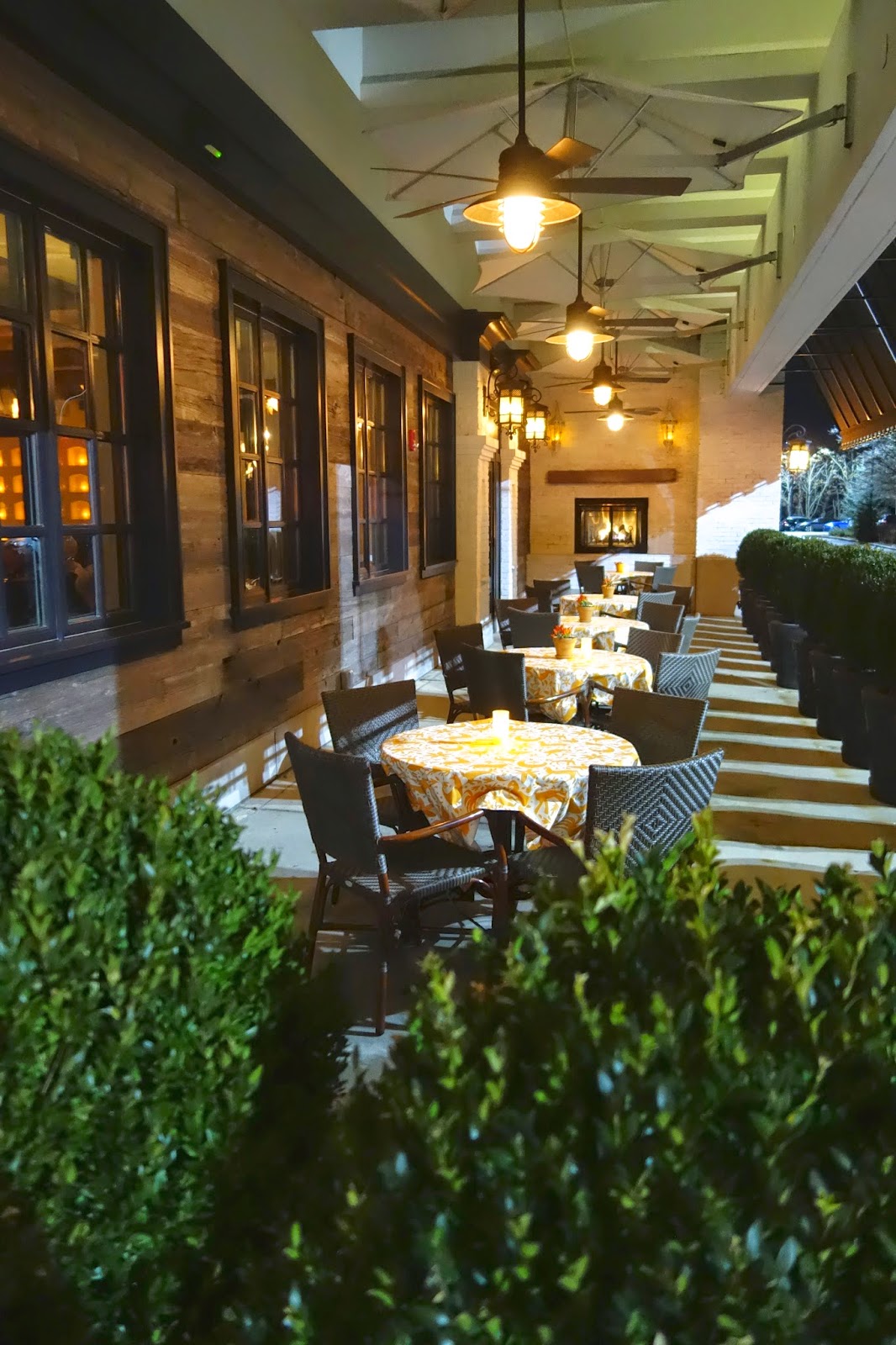 When we arrived, we gave our name to the hostess, as we had a reservation. She said, "Great. Your table will be ready in a few a minutes. The party sitting there now has their check. We just need to reset the table." We accepted this answer and stepped to the side. While we were waiting, we witnessed the hostess say this exact same thing to the next five parties that walked in. Obviously not every single table had their check and was getting ready to get up. It would have been fine for her to say, "It will just be a few minutes." It rubbed us both the wrong way that she continued to basically lie to everyone who came in.

About ten minutes later, we were escorted to our table in a quiet corner in the dining room. The rear wall of the dining room is backlit with this yellow light that casts a warm glow over the space. 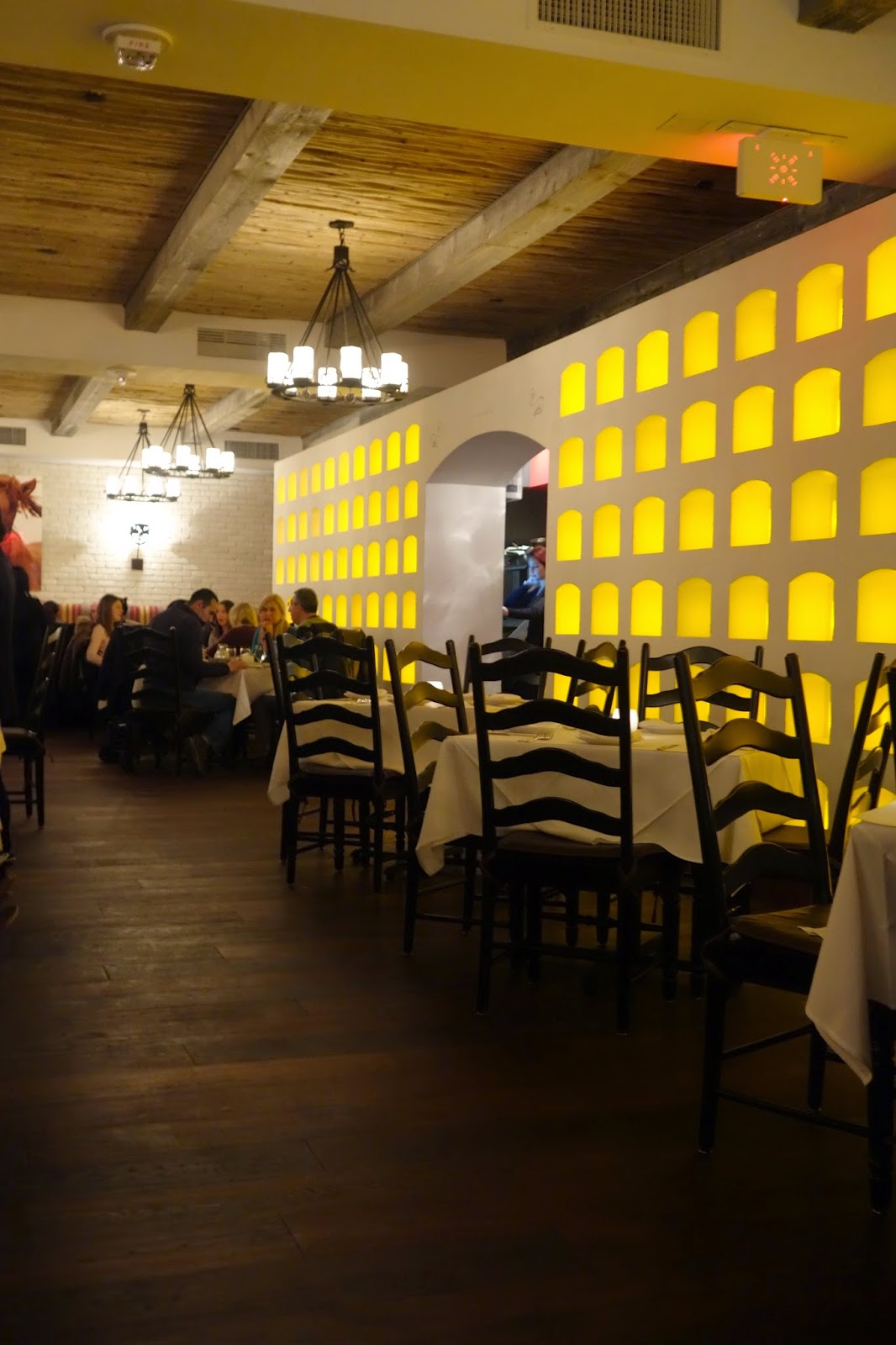 That cozy feeling continues with the light fixtures. Each iron chandelier has candles in places of bulbs. 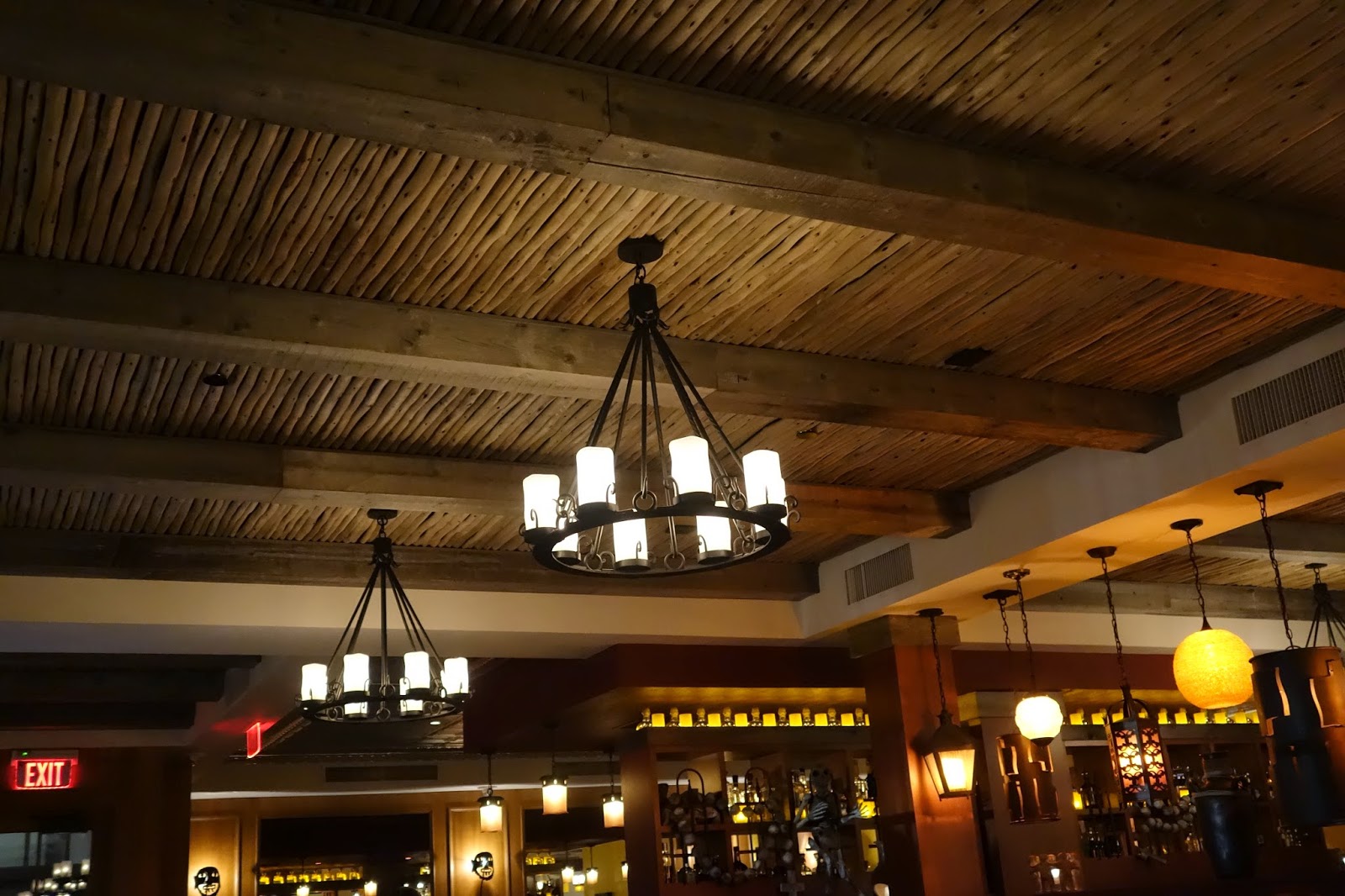 As soon as we were seated we couldn't wait to explore the menu offerings. 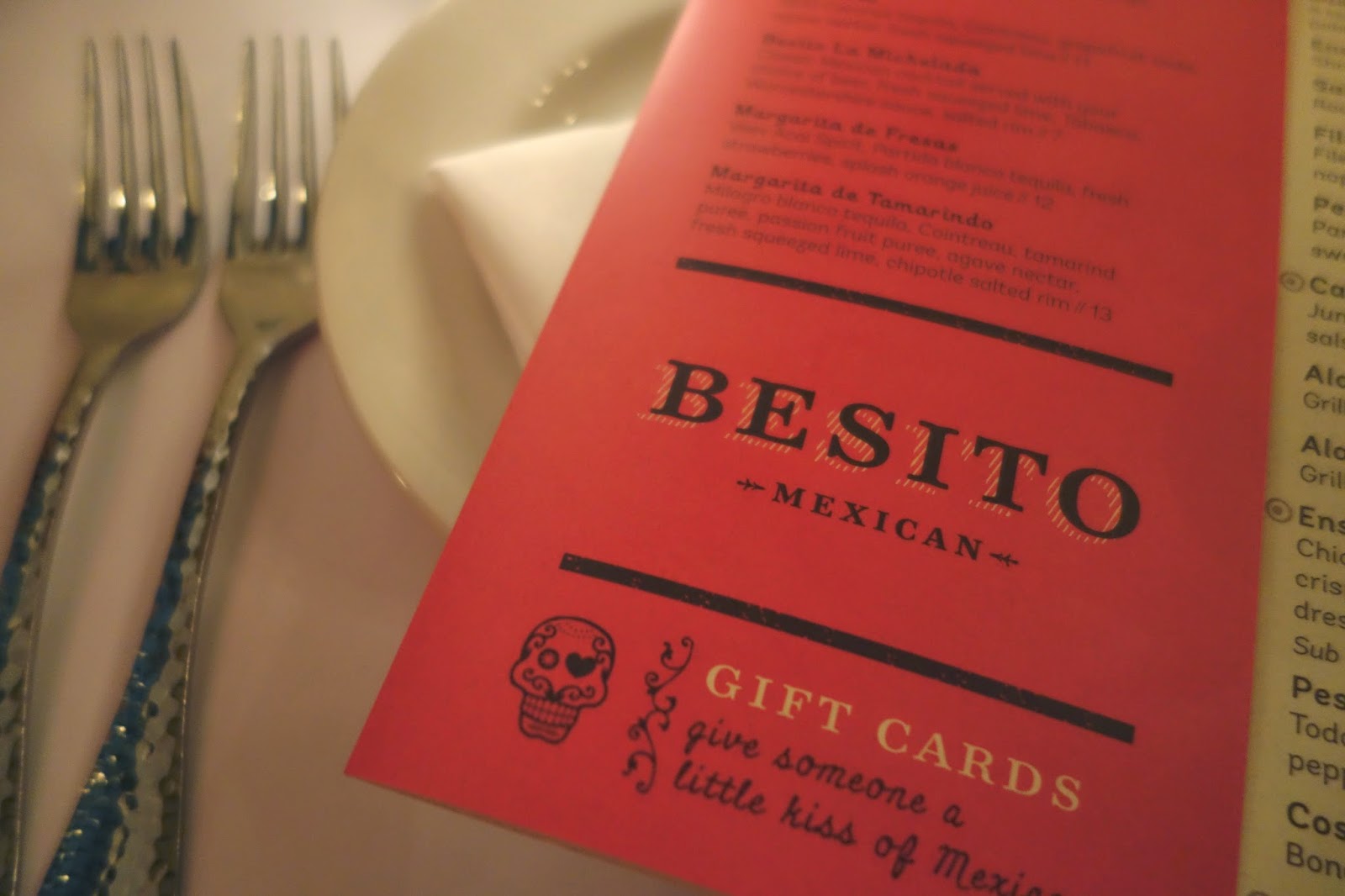 While perusing, our waiter came over to introduce himself and drop off a basket of tortilla chips and a small dish of the house salsa. 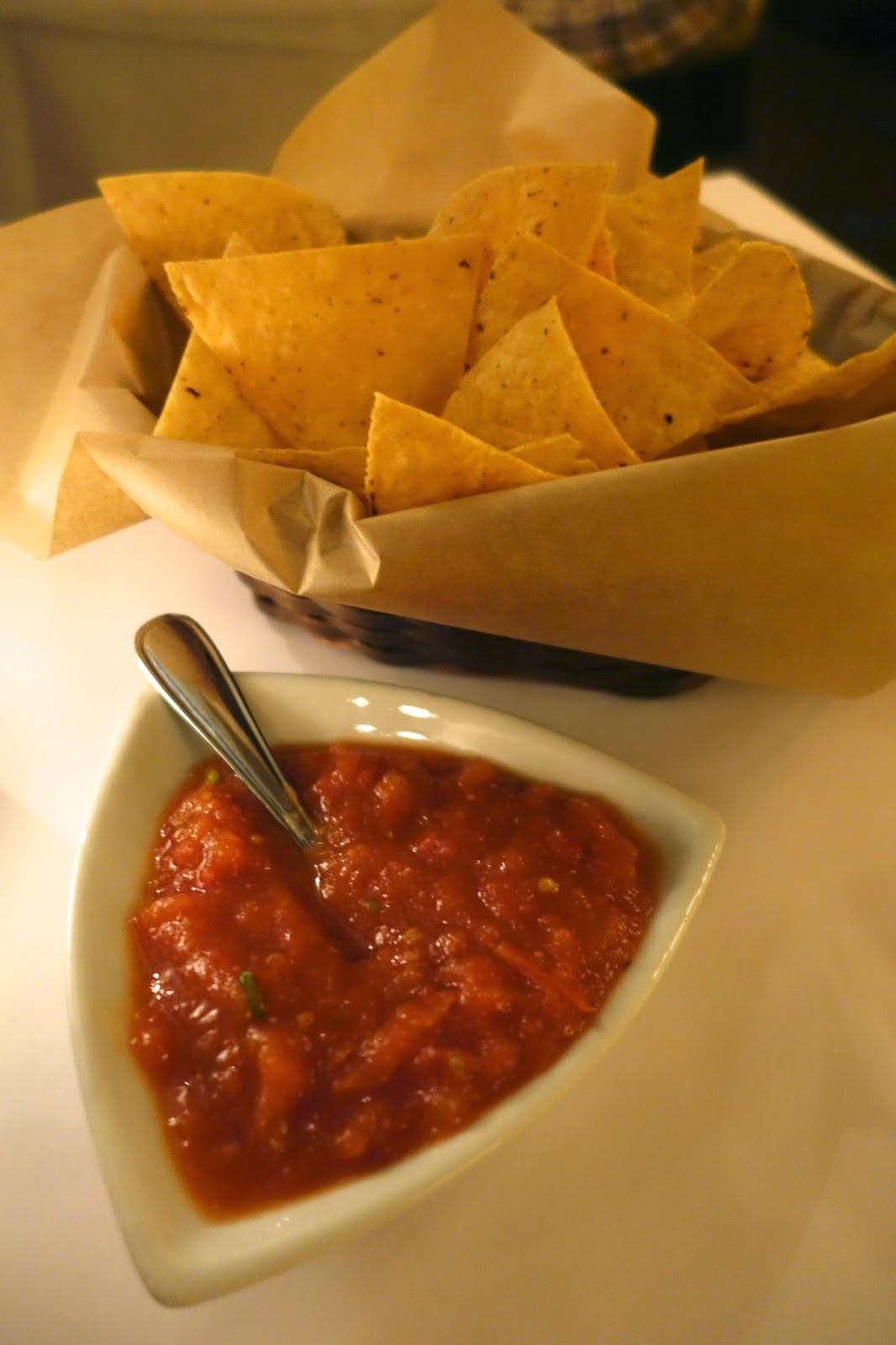 Before walking away he asked, "Can I interest you in our tableside guacamole?" Um, is the sky blue, sir?

A few moments later he returned with the guacamole cart. I have to say, after all my meals at Rosa Mexicano, I have very high standards for guacamole. I was skeptical, but the Besito version was excellent. 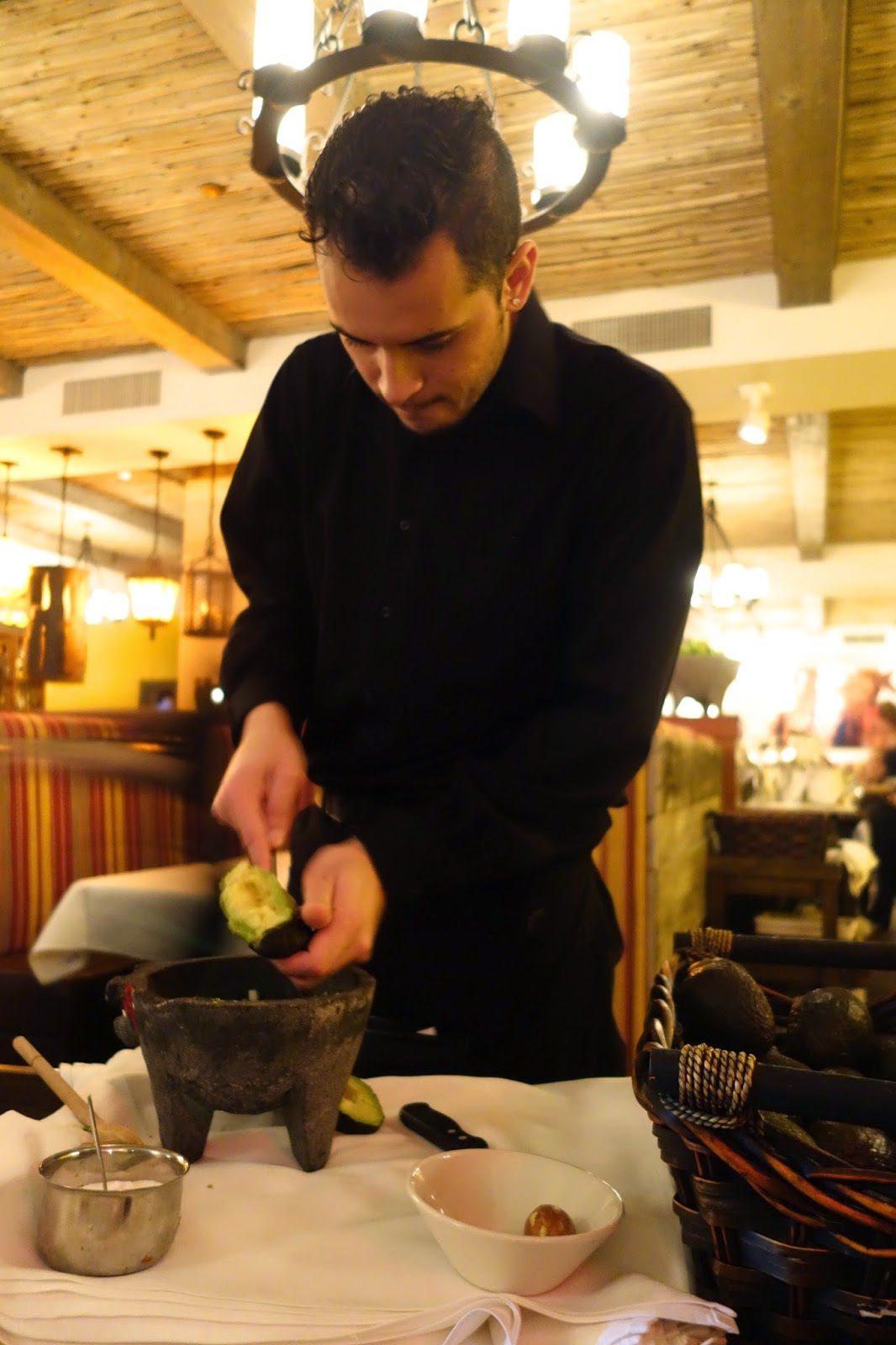 All of the ingredients were so fresh. We gobbled that guac right up. 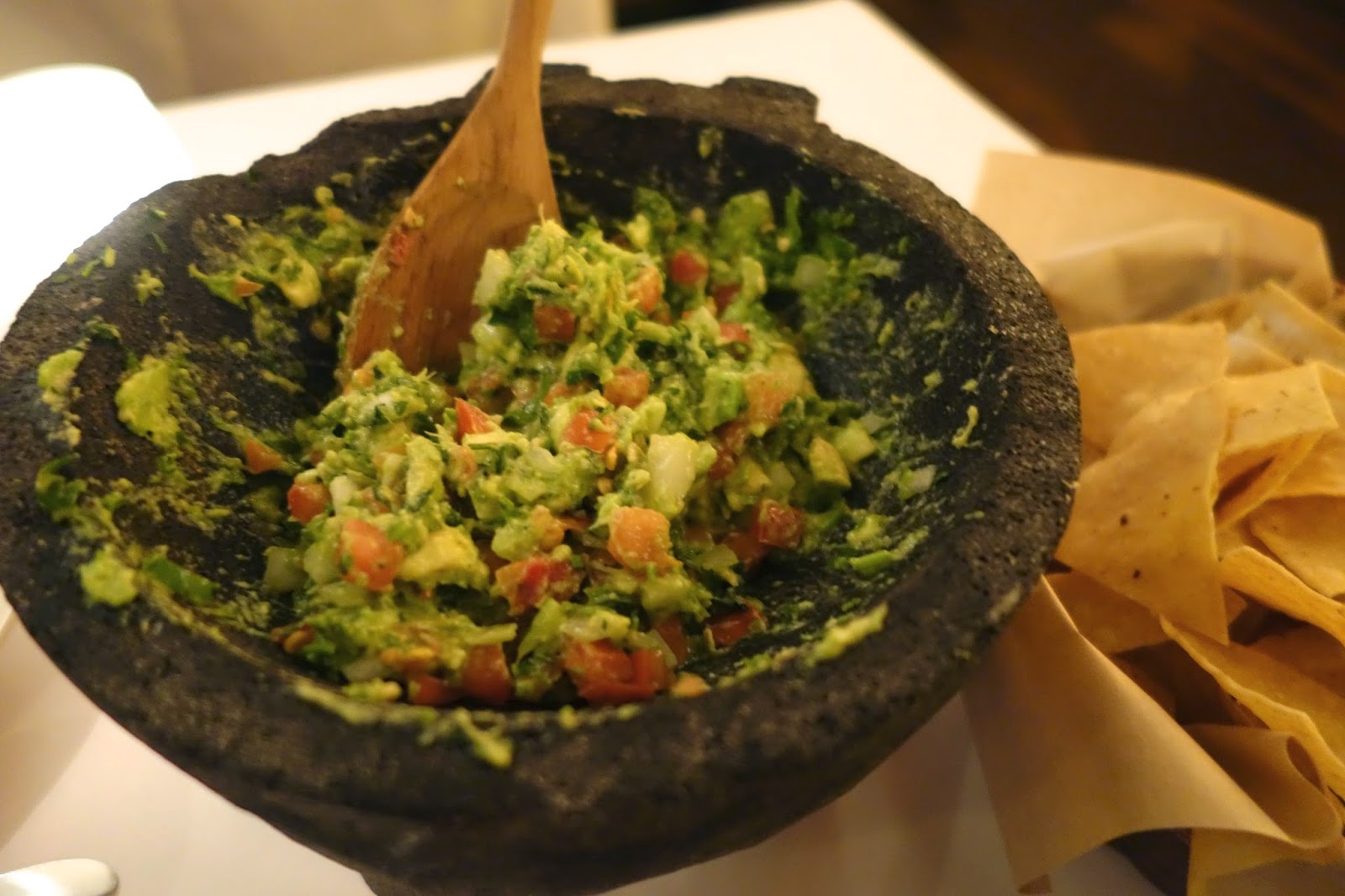 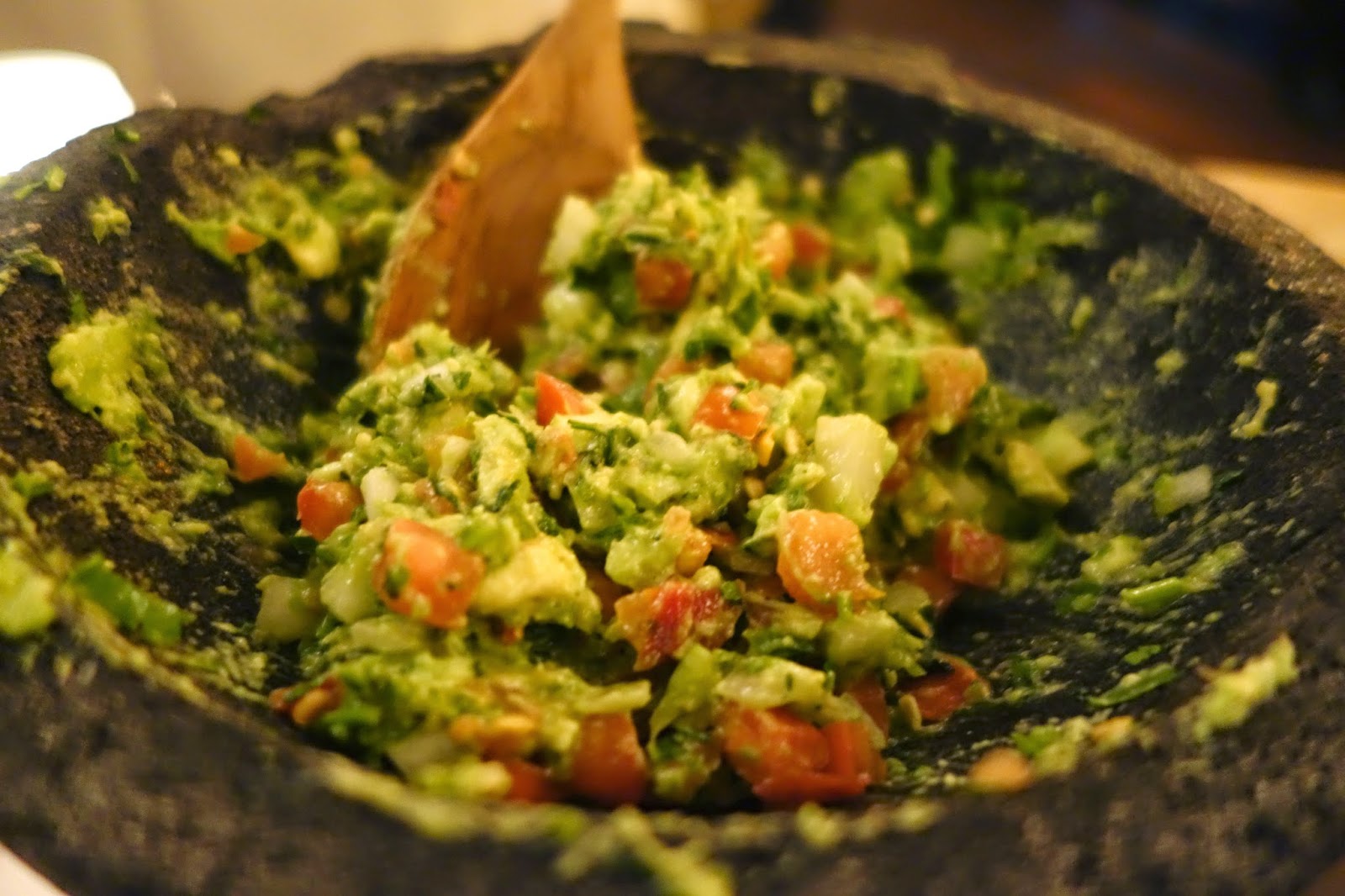 Post-guacamole, our drinks arrived. We decided to share a pitcher of the red sangria. To me, the best sangria I ever had was when I lived in Cordoba, Spain and I haven't been able to recreate that same taste or presentation until this pitcher. The Besito sangria has just the right sweetness from the wine and they cube their fruit nice and small, just the way I remember it. 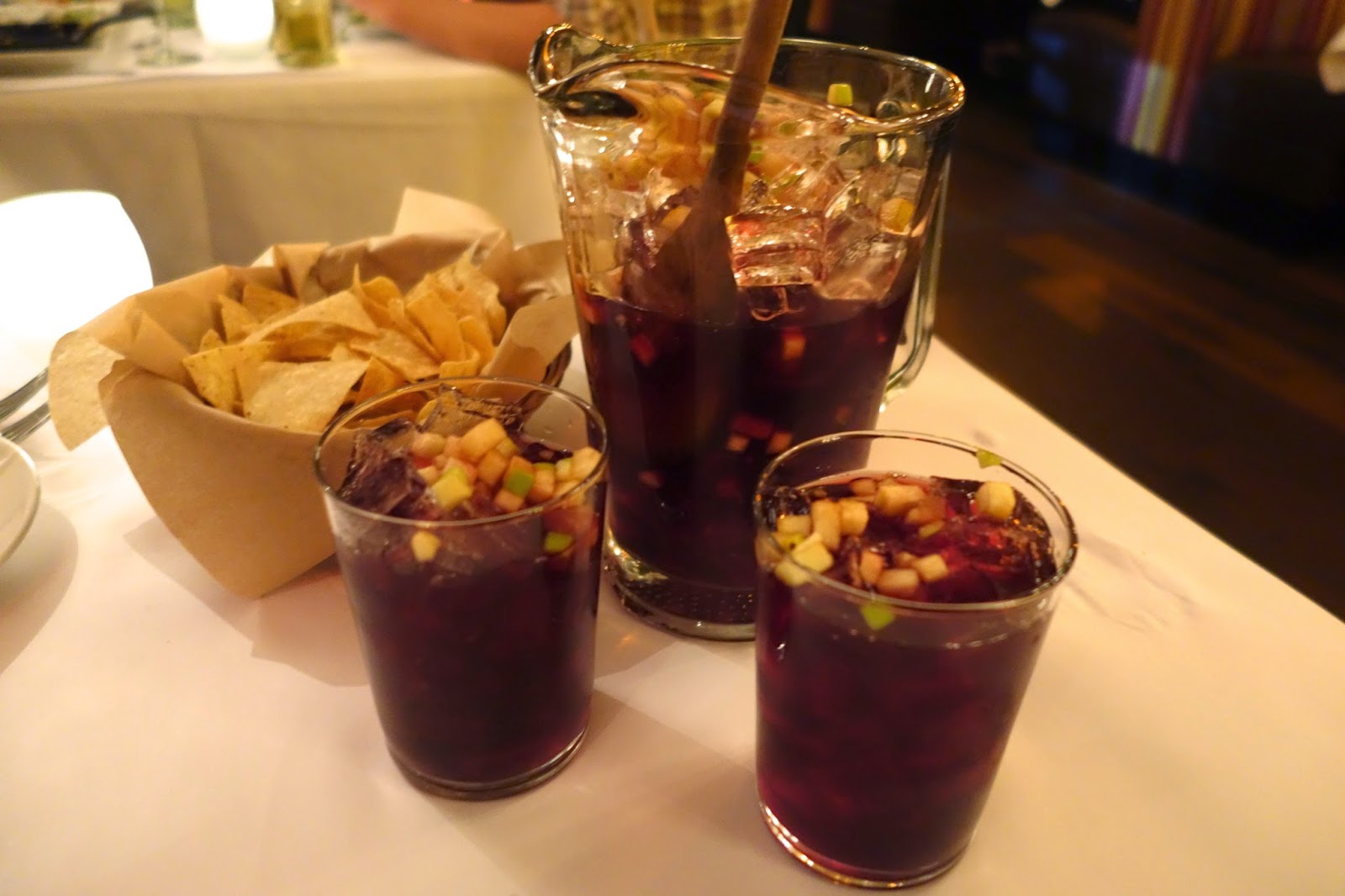 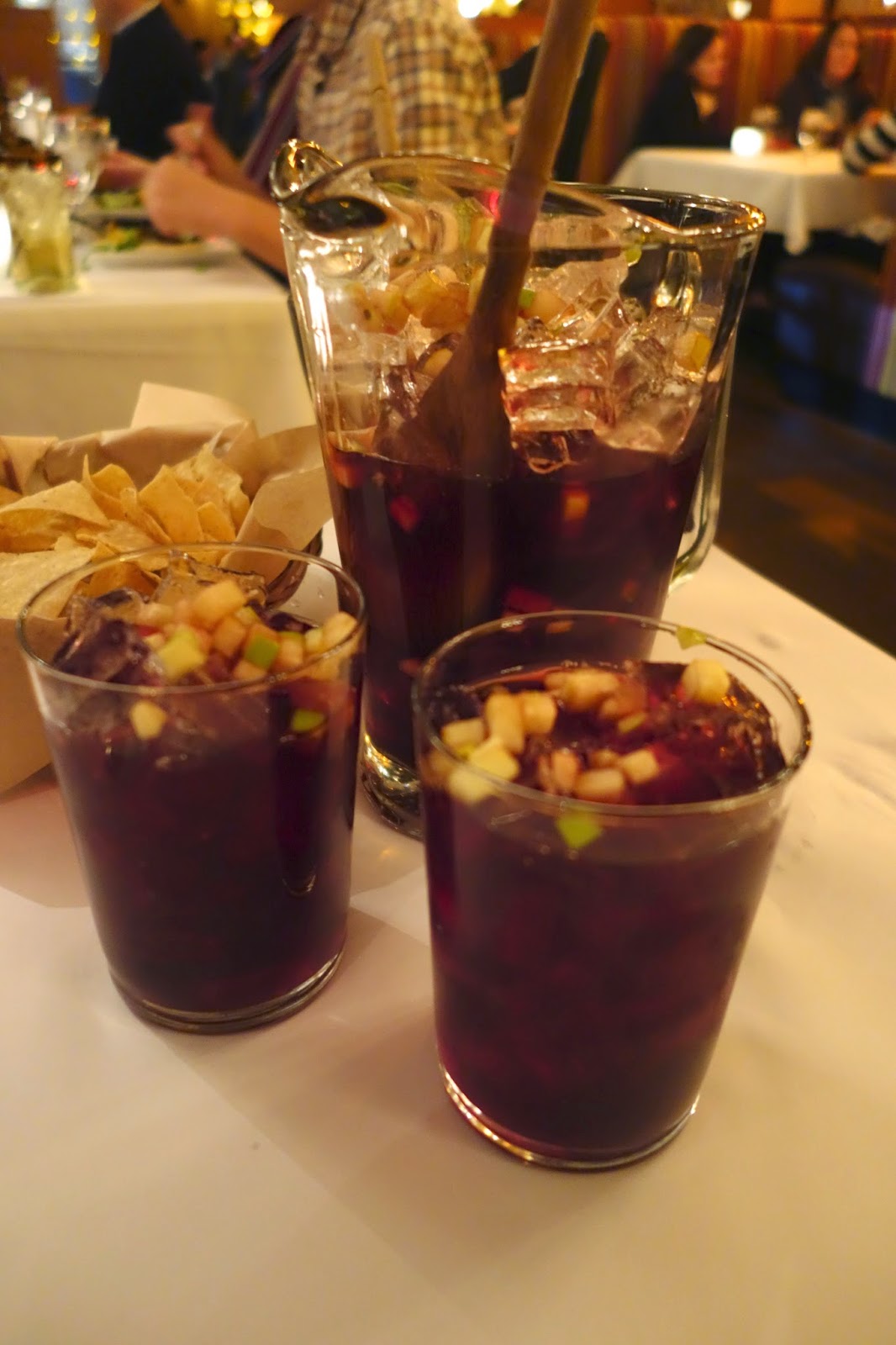 For the main event, we decided to share one appetizer, one entree and a side dish. The first to arrive was the chile relleno (stuffed pepper). Chile relleno is one of my favorite dishes, but Besito's version was lacking bold flavor and texture. Each bite tasted one note and the consistency of every element of the dish was just mushy. 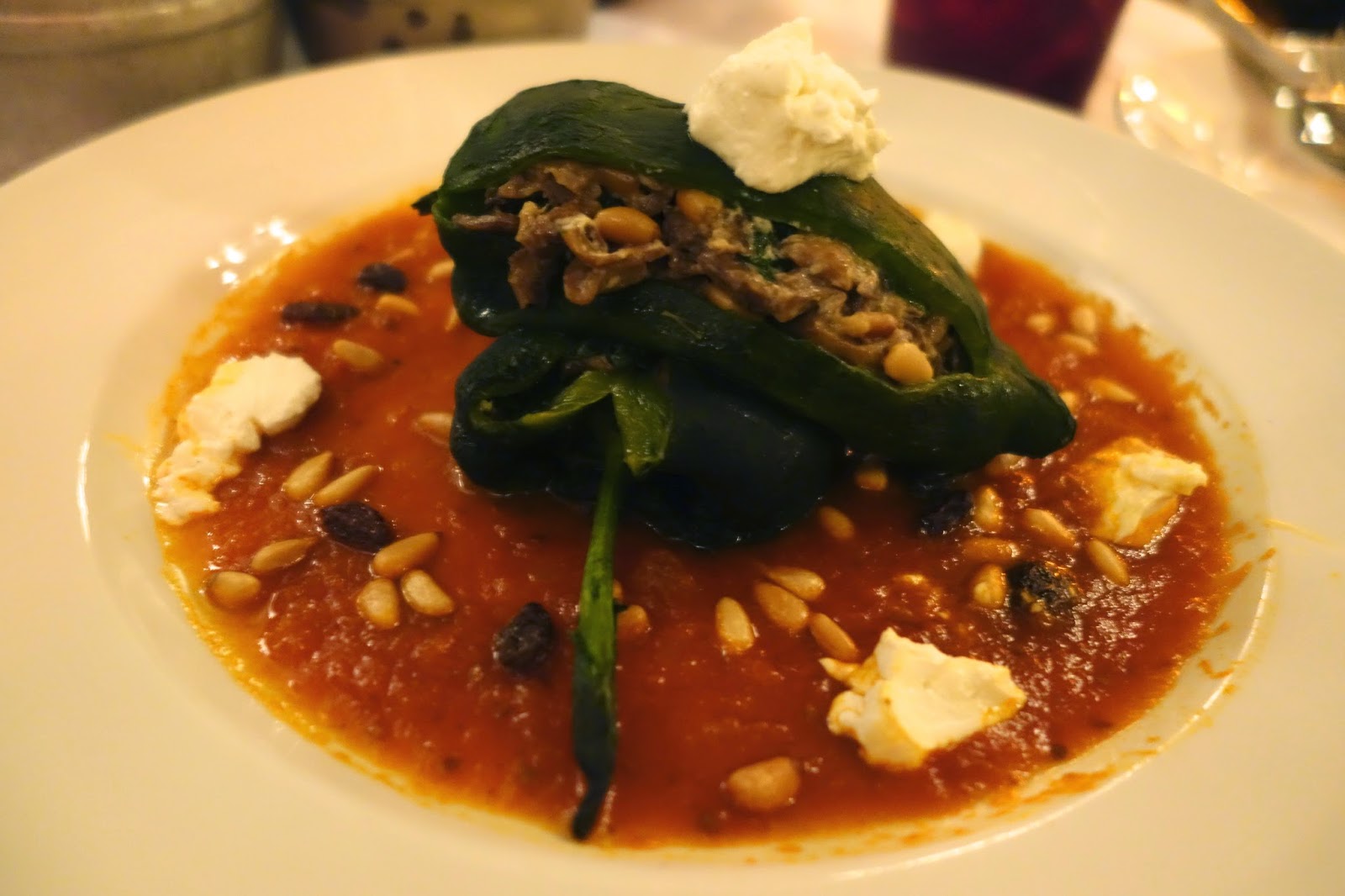 Next we tried the quesadilla de calabaza which was stuffed with squash blossoms, roasted green chile, Chihuahua cheese and cremini and button mushrooms. It was garnished with salsa verde, pico de gallo and sour cream. This was by far our favorite dish of the night. The quesadilla shell was expertly crisped, the veggies were fresh and flavorful and the melted cheese oozed into every bite. 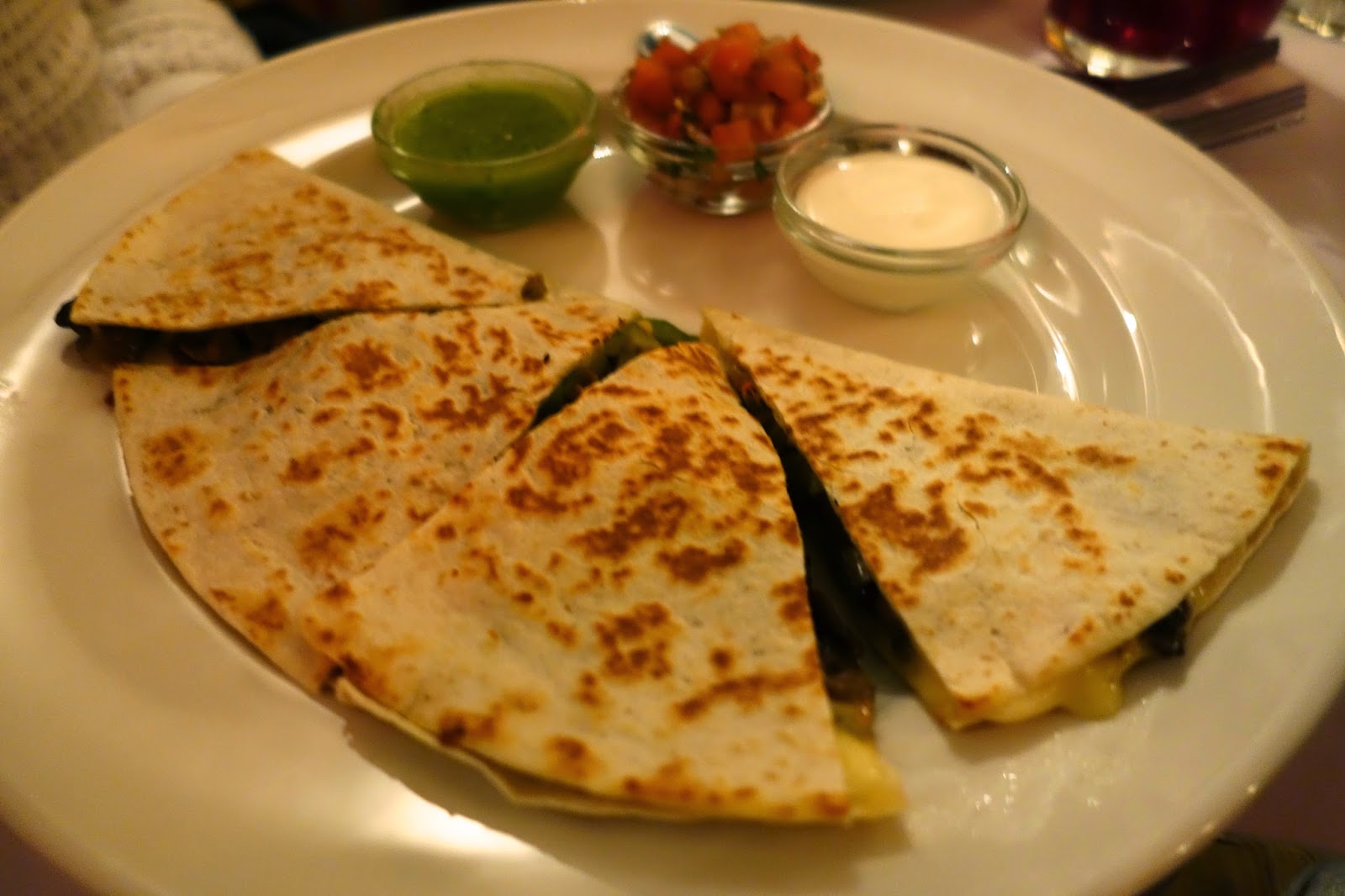 We also shared the elotes de la calle (street corn). Each corn kernal had an awesome char to it. They could have been more generous with the queso fresco topping. Let's be honest, we all order this dish for the queso topping, am I right? 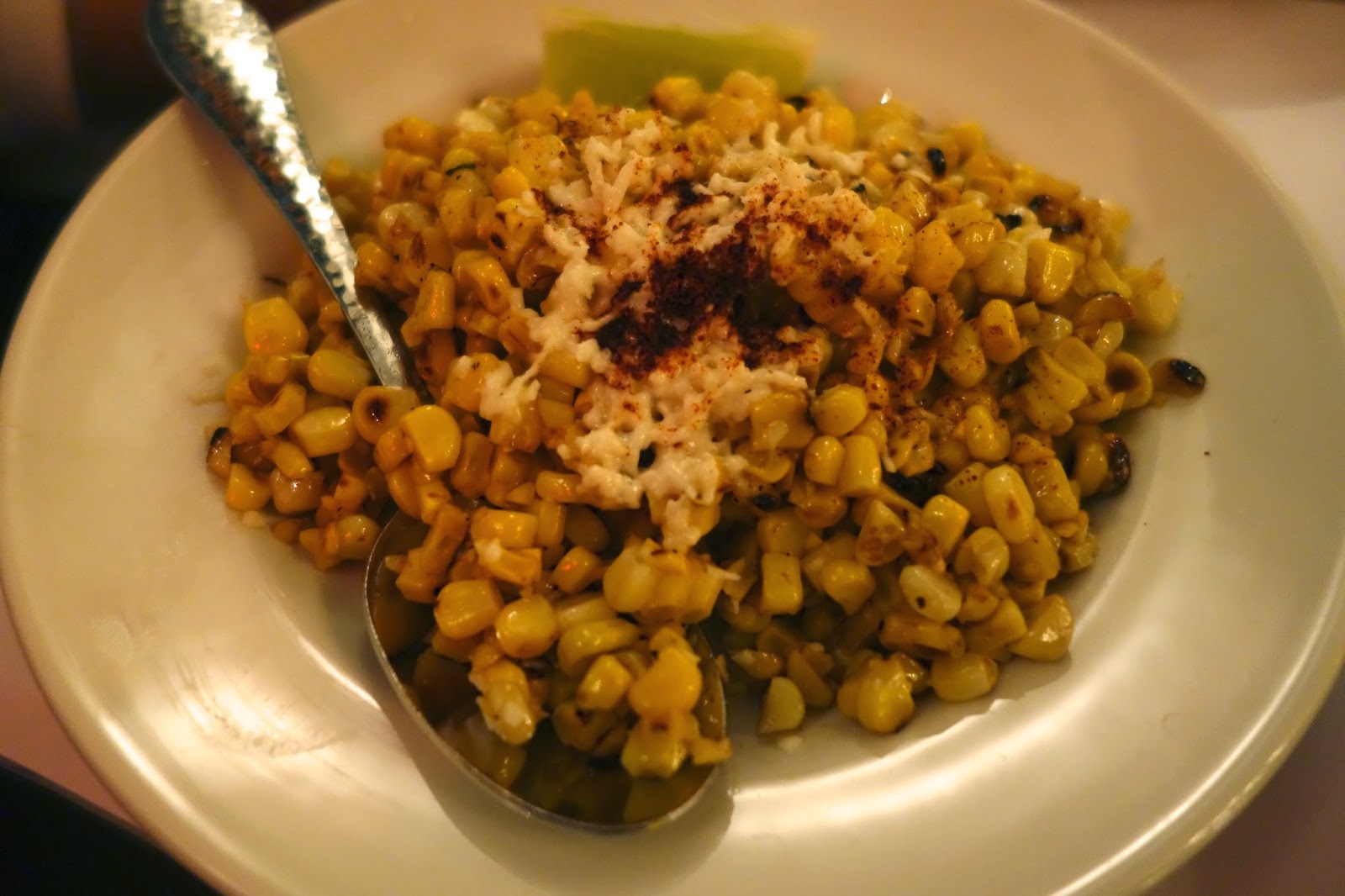 Unbeknownst to us, our chile relleno also came with sides of black beans and rice. The beans were fantastic and made a great addition to anything we added them to - tortilla chips, the quesadilla, the corn, the rice - you name it. 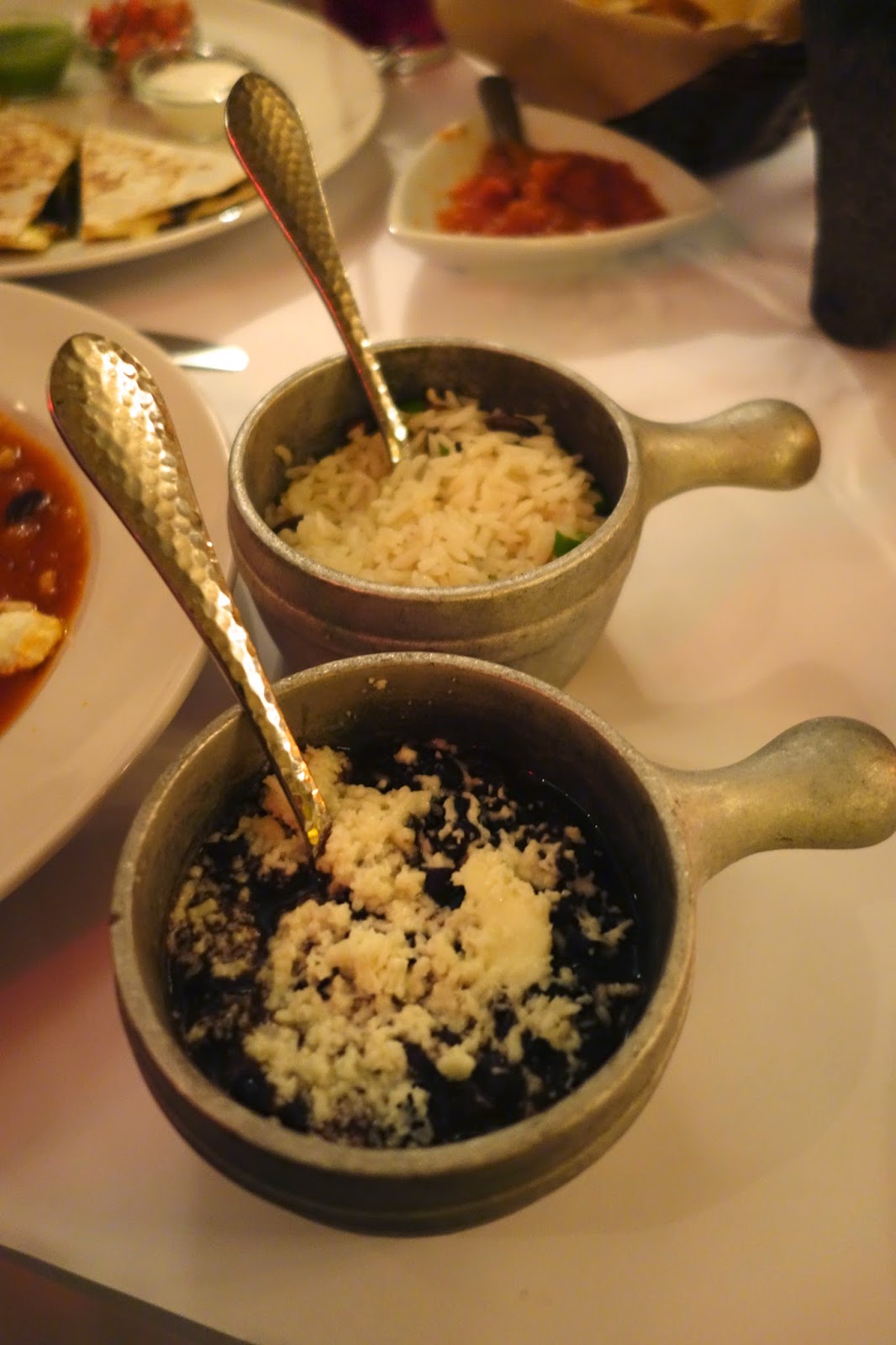 Eventually we tapped out on the entree round and decided to take a look at the dessert menu. You know me, I always go for chocolate, but one of the seasonal desserts was actually sounding quite nice - the pumpkin flan. 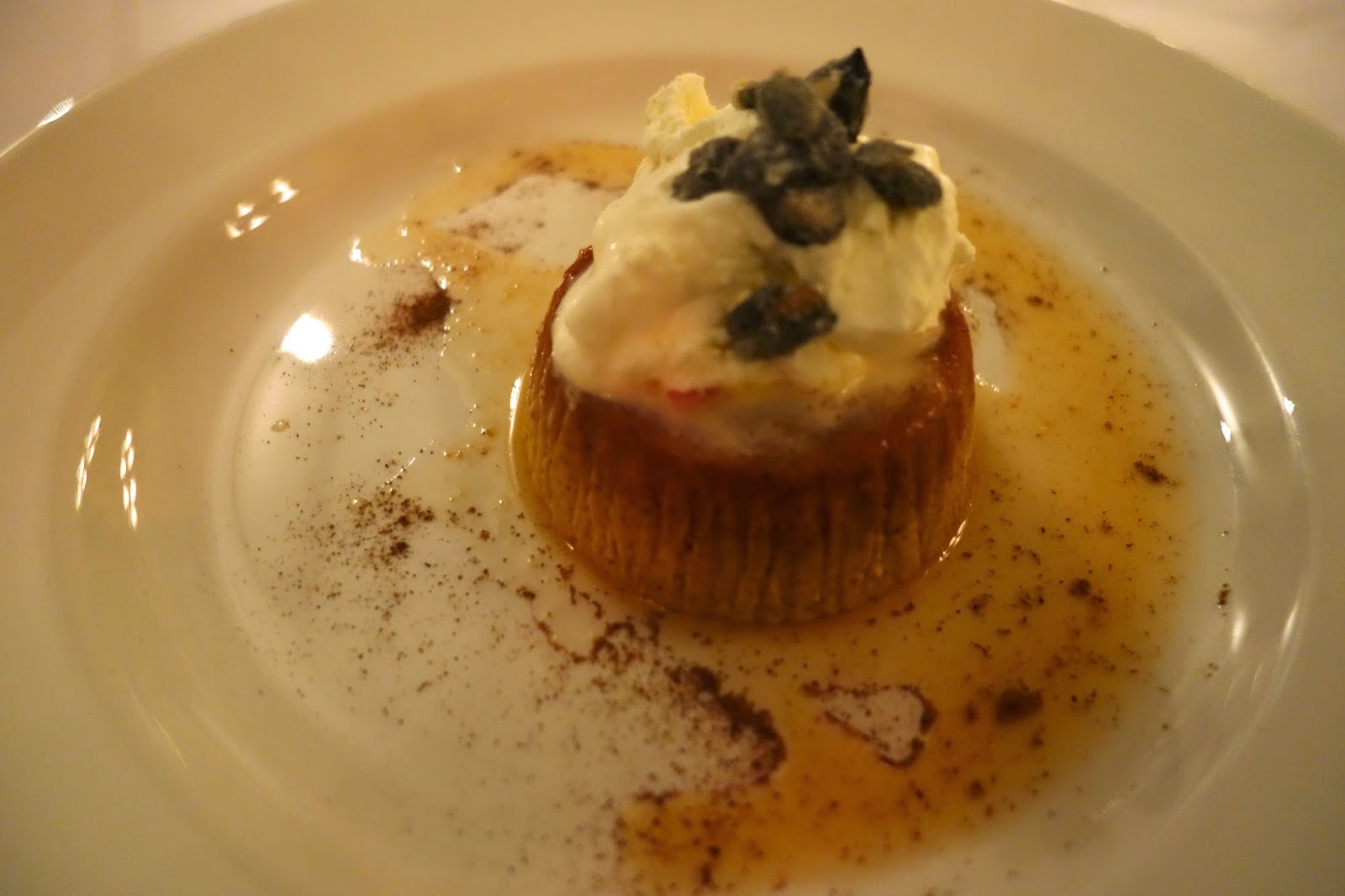 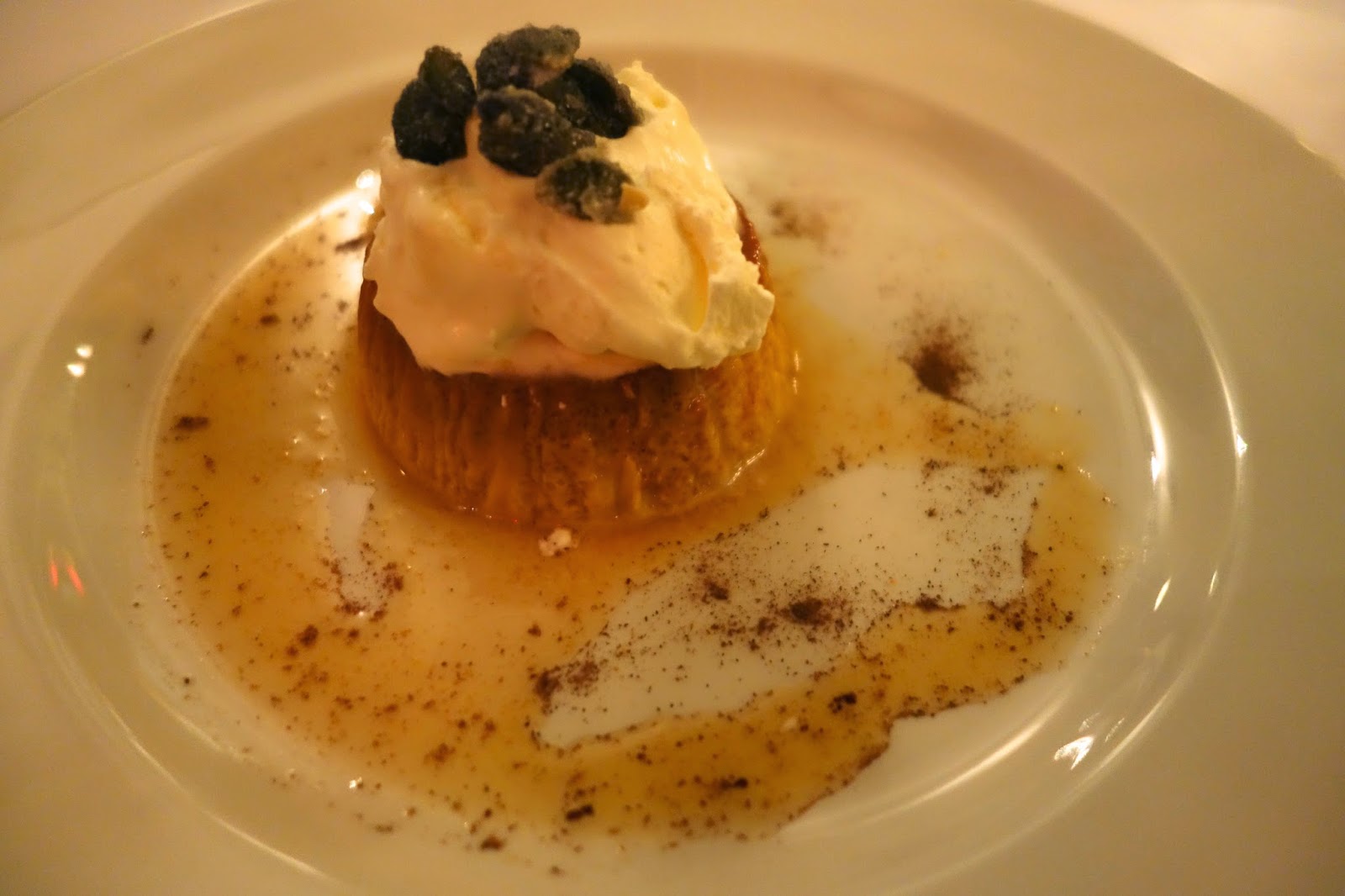 I so wanted to like this dessert, but the texture was just too strange. It wasn't the usual silky taste of flan I've had in the past, it was more  . . . slimy.

When we were ready for the check, our waiter also brought us a bag of churros and a few worry dolls. Every table receives both these parting gifts with their check. 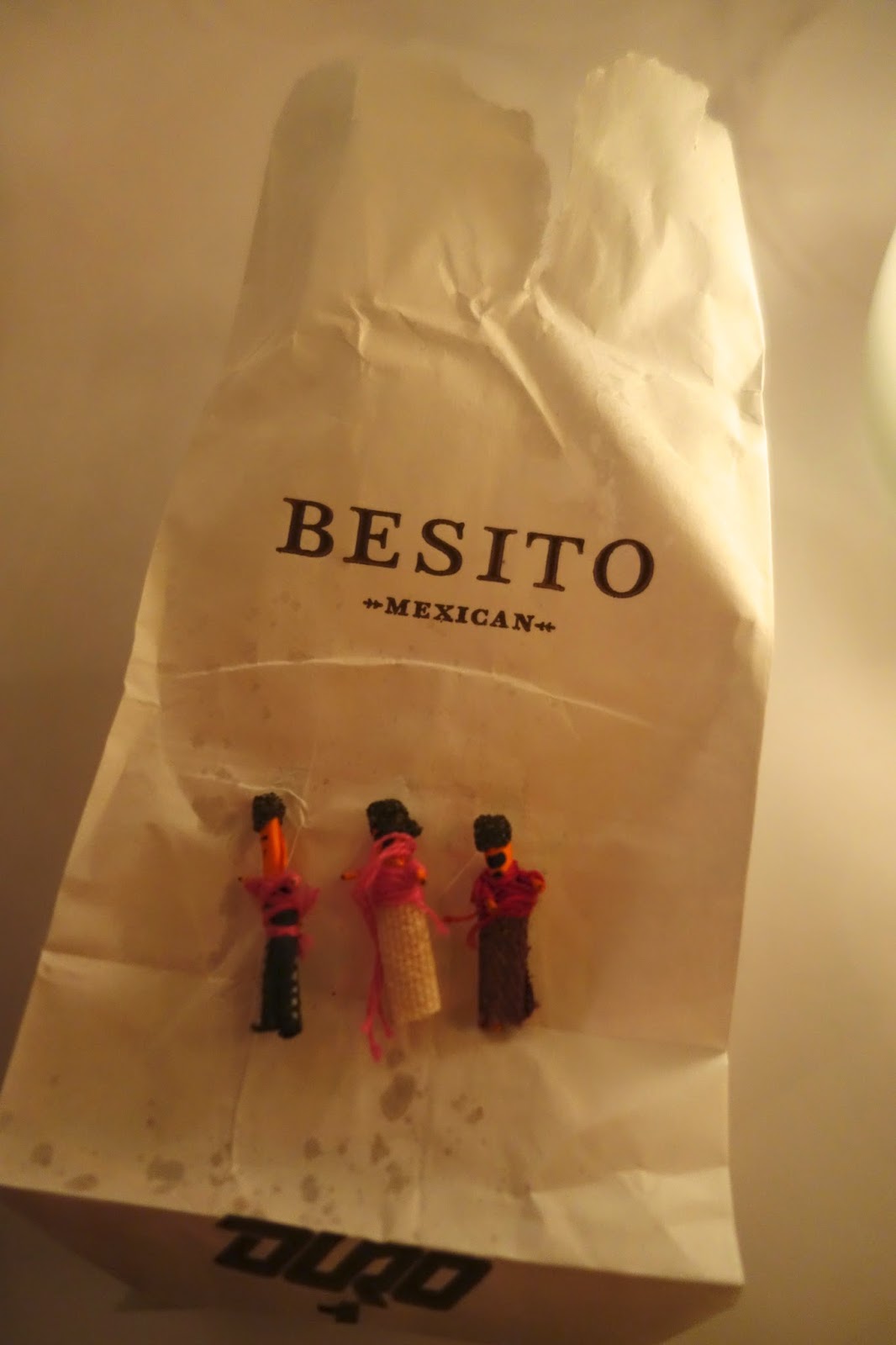 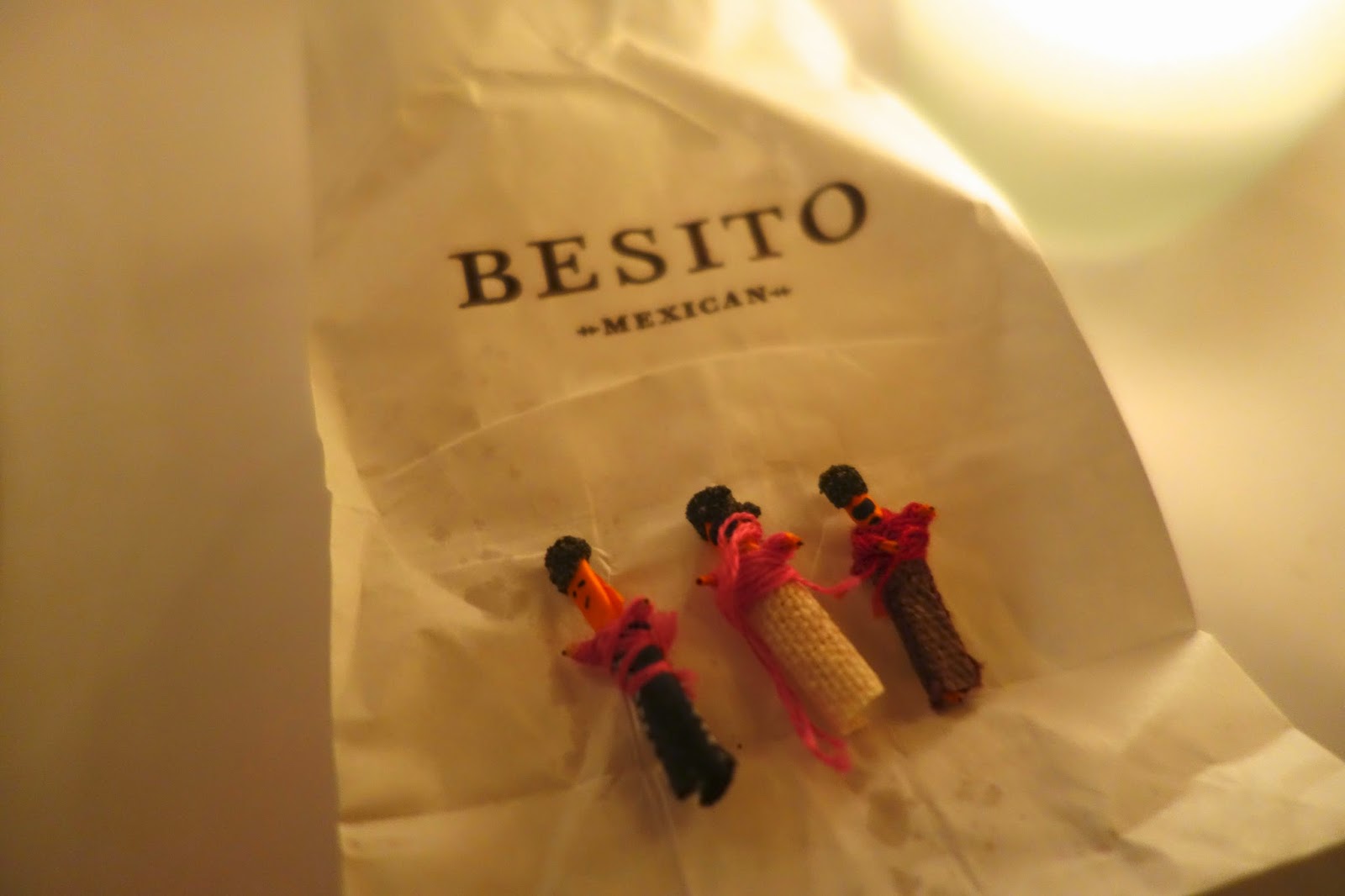 While the worry dolls would definitely be cute for little kids, for two thirty year olds it felt a bit silly. Also, the churros came solo, without any chocolate sauce, which let's face it, is the whole point.

Overall, our experience at Besito was a good one. They are in a super convenient location, the restaurant is so inviting, the tableside guacamole is delicious and I'll keep coming back again and again for that quesadilla!

Have you been to Besito in Burlington or Chestnut Hill? What did you think?

I have a reservation in january....excited to check them out!

I can't wait to see what you order!

I've been to the one in Burlington for lunch (great experience) and am planning to head to the Chestnut Hill one soon since it's right down the street from me. I actually really liked the worry dolls and thought they were a cute/thoughtful parting gift.

Can't wait to hear what you think of the second MA location.

We all know that using green in our lives is healthy for us. I have never heard of green medicine so it is quite new news for me that green medicine is introduced. Well for health point of view adding masterpapers.com review in diet keeps you healthy. 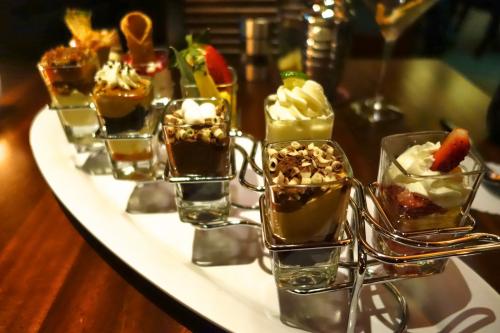 For months now my mother, sister and cousin have been raving about a restaurant called Seasons 52. They all live in Florida and there are locations in Boca Raton, Fort Lauderdale and Miami. When I learned a Seasons 52 was opening in Chestnut Hill (which is developing so rapidly it feels like a video game), I couldn't wait to check it out. 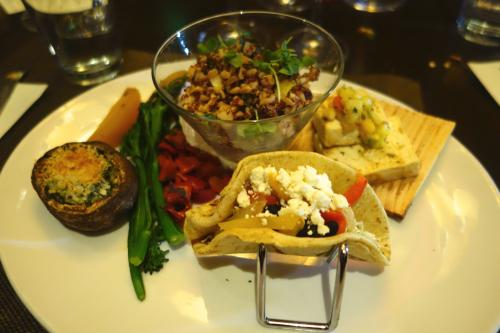 I wish I could take credit for discovering Seasons 52, but it was actually my mother and cousin (both regulars at the Seasons 52 Florida locations) who introduced me to the restaurant. I made my first trip to the Chestnut Hill, MA location exactly two years ago (you can read about that visit here) and was thrilled to be invited back to sample the new menu for spring 2016. 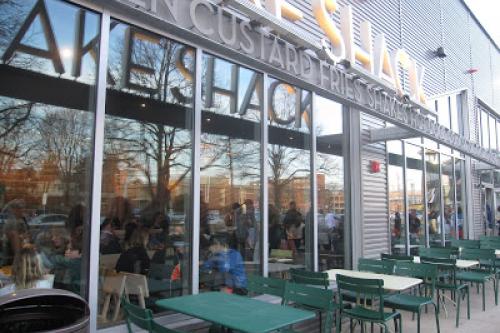 Back in January 2012 I made my first trip to Shake Shack in New York. I fell in love, so imagine my surprise and delight to learn the Shack was coming to Massachusetts! Last week I ventured out into suburbia to visit our great home state's inaugural Shack. It's in Chestnut Hill, in the strip mall that used to house the movie theater and Macy's, but is now a new commercial development called The Street.