When I first graduated from college I had a ton of friends who lived in Davis Square. I used to spend every weekend bopping around those bars and restaurants. One late night I stumbled into the Rosebud diner with a friend. I can't remember what we ate for dinner, but I do remember we each ordered a slice of pie (a la mode, of course) and when the check came, there was no pie listed. From that night on, Rosebud would be known as the home of free pie.

A few months ago when I heard the Rosebud was closing, I was sad. Not only because there wouldn't be any more free pie, but because that classic diner car feel is hard to find. It's a nice piece of American nostalgia in a world dominated by chain restaurants.

Well, imagine my surprise and delight to learn the Rosebud was reopening under new ownership. The renamed Rosebud American Kitchen & Bar opened its doors last week and after a rave review from a friend, we decided to go on Sunday night.

From the outside, the Rosebud still looks the same. Same diner car, same neon pink sign. 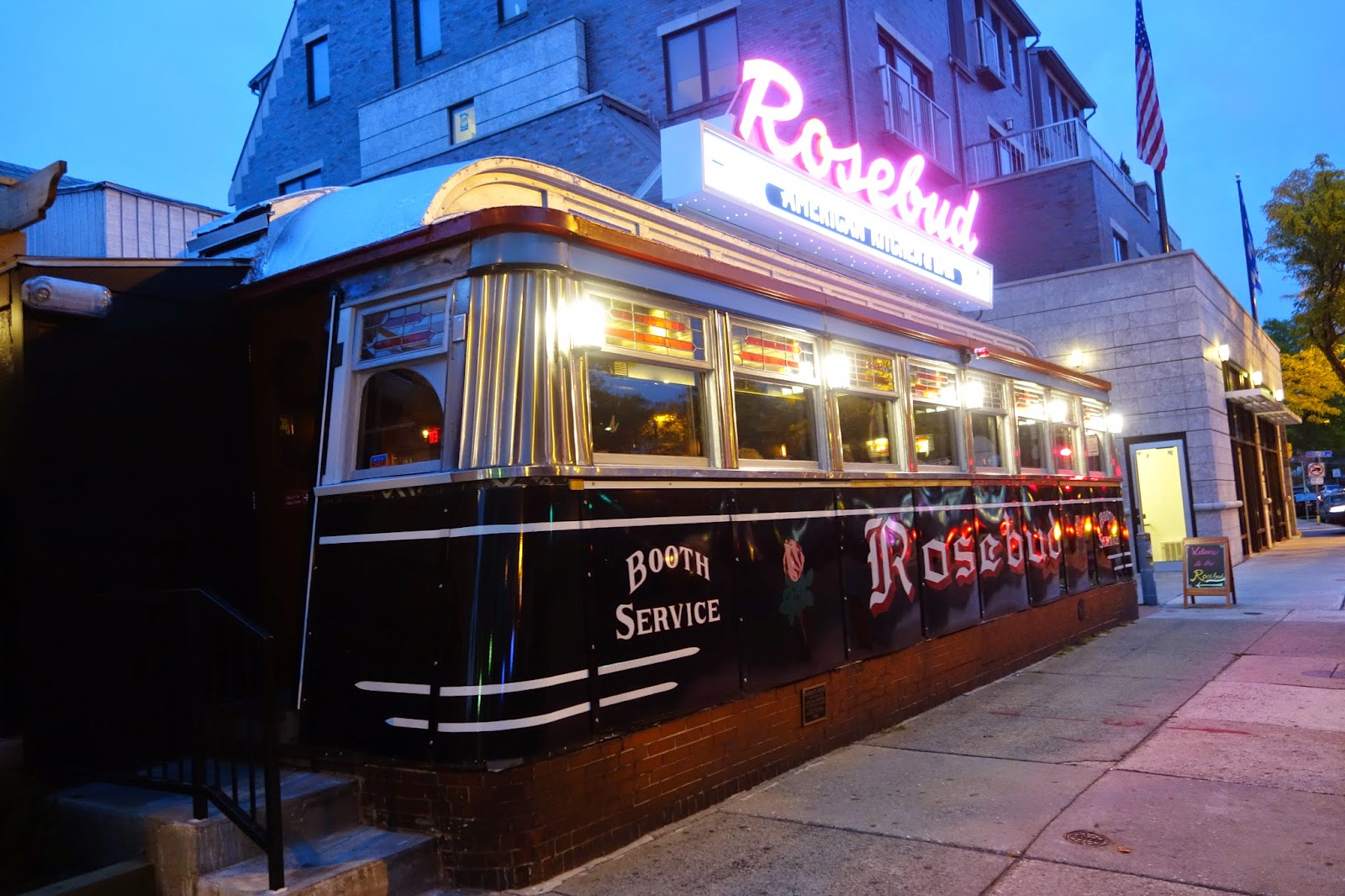 The entrance however, has moved to the other side of the car. 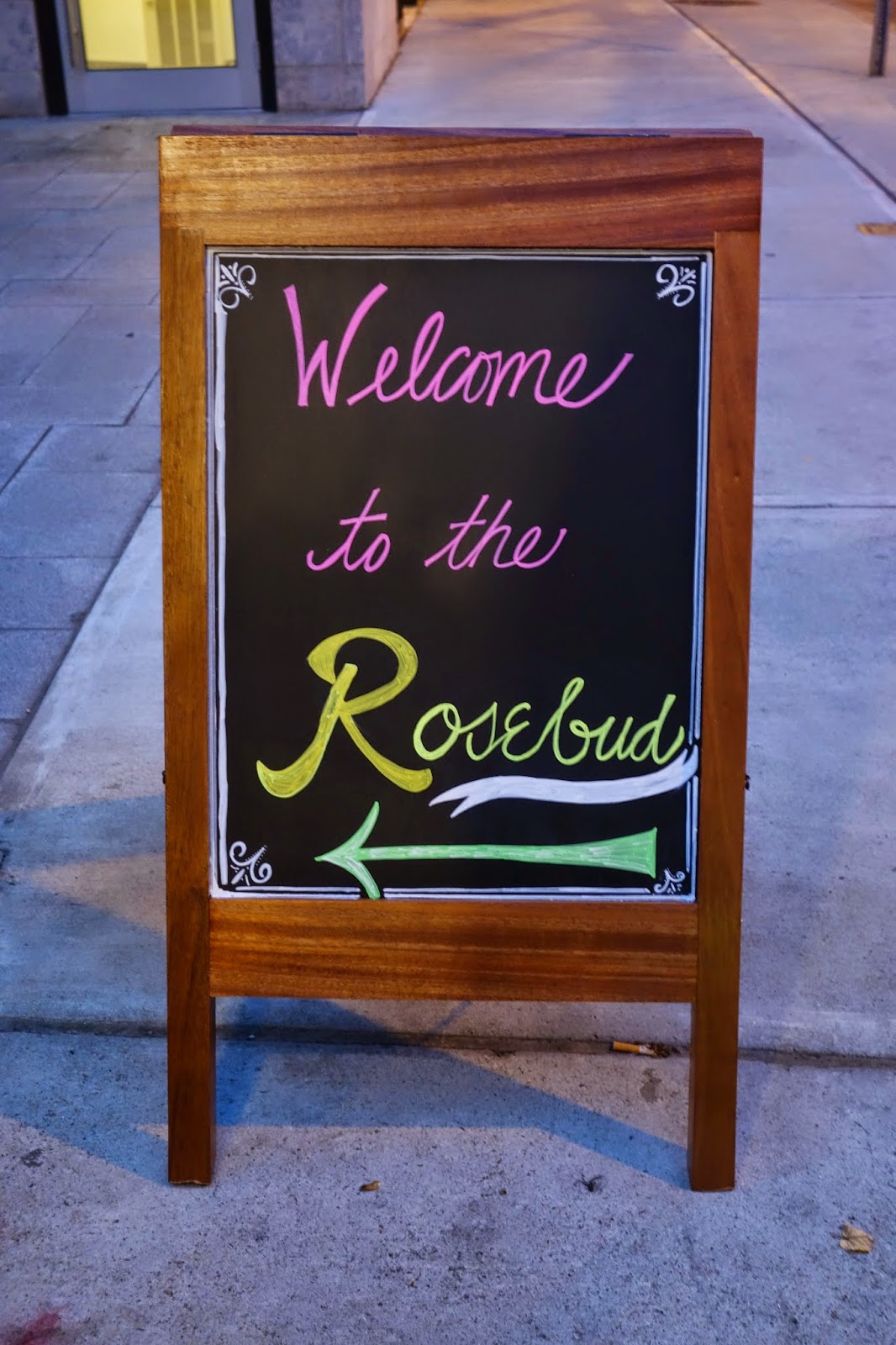 Inside, the Rosebud is completely transformed. What used to feel run down and dingy now feels sleek and dare I say it, trendy. 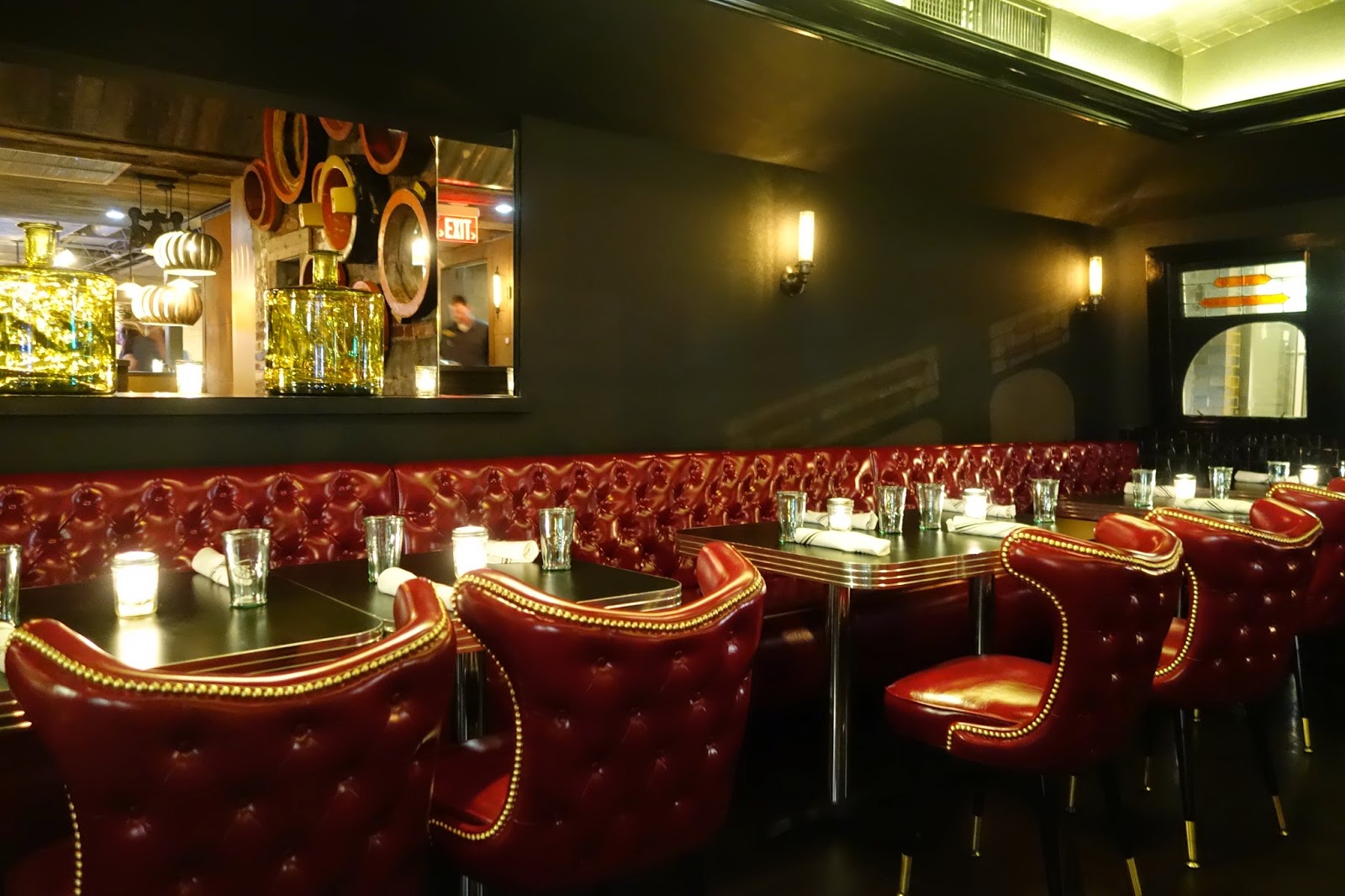 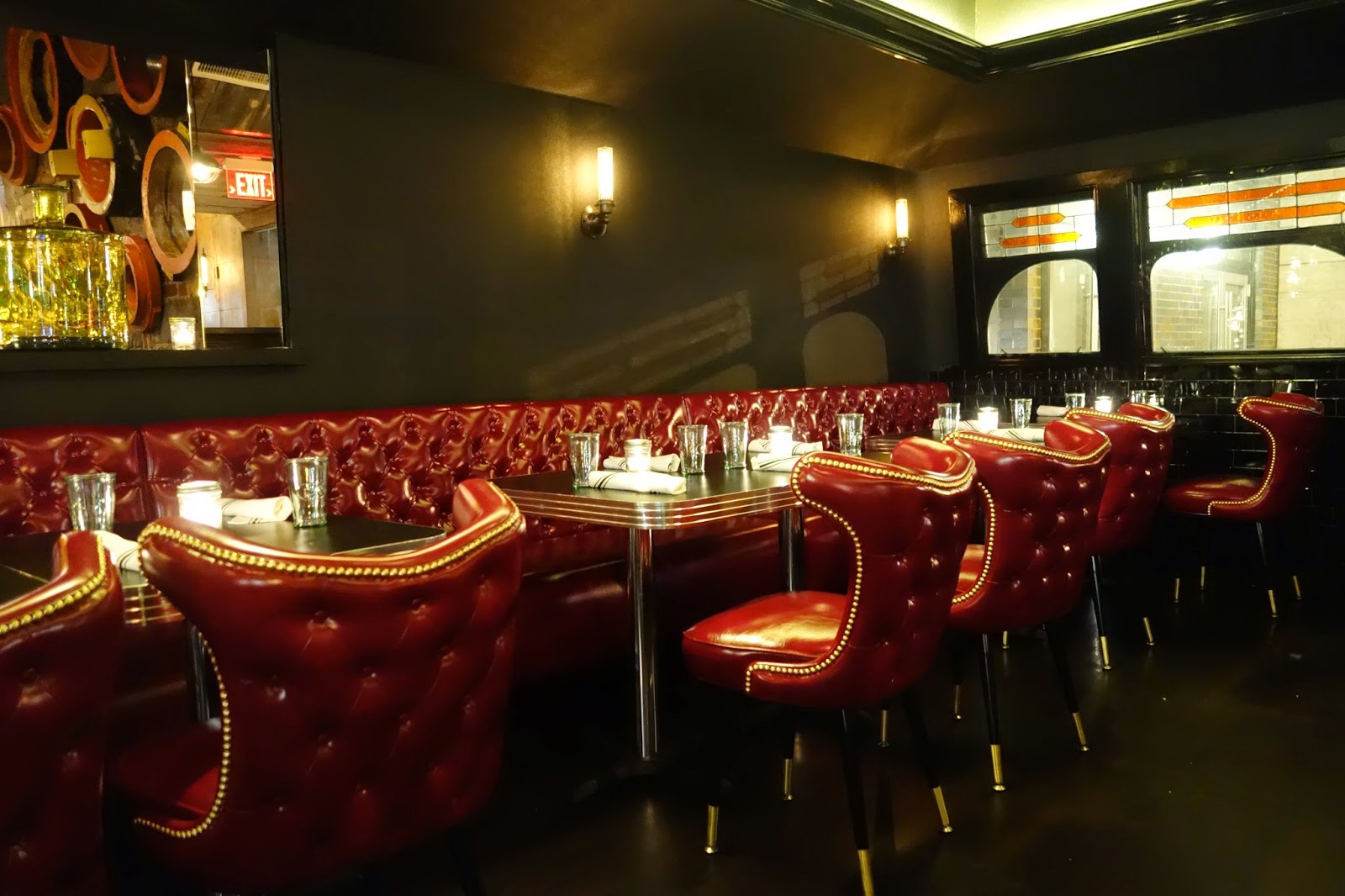 The old booths have been replaced with gorgeous, cherry red, tufted leather chairs and benches.

We were seated in a booth right up against the diner car windows, overlooking the square. 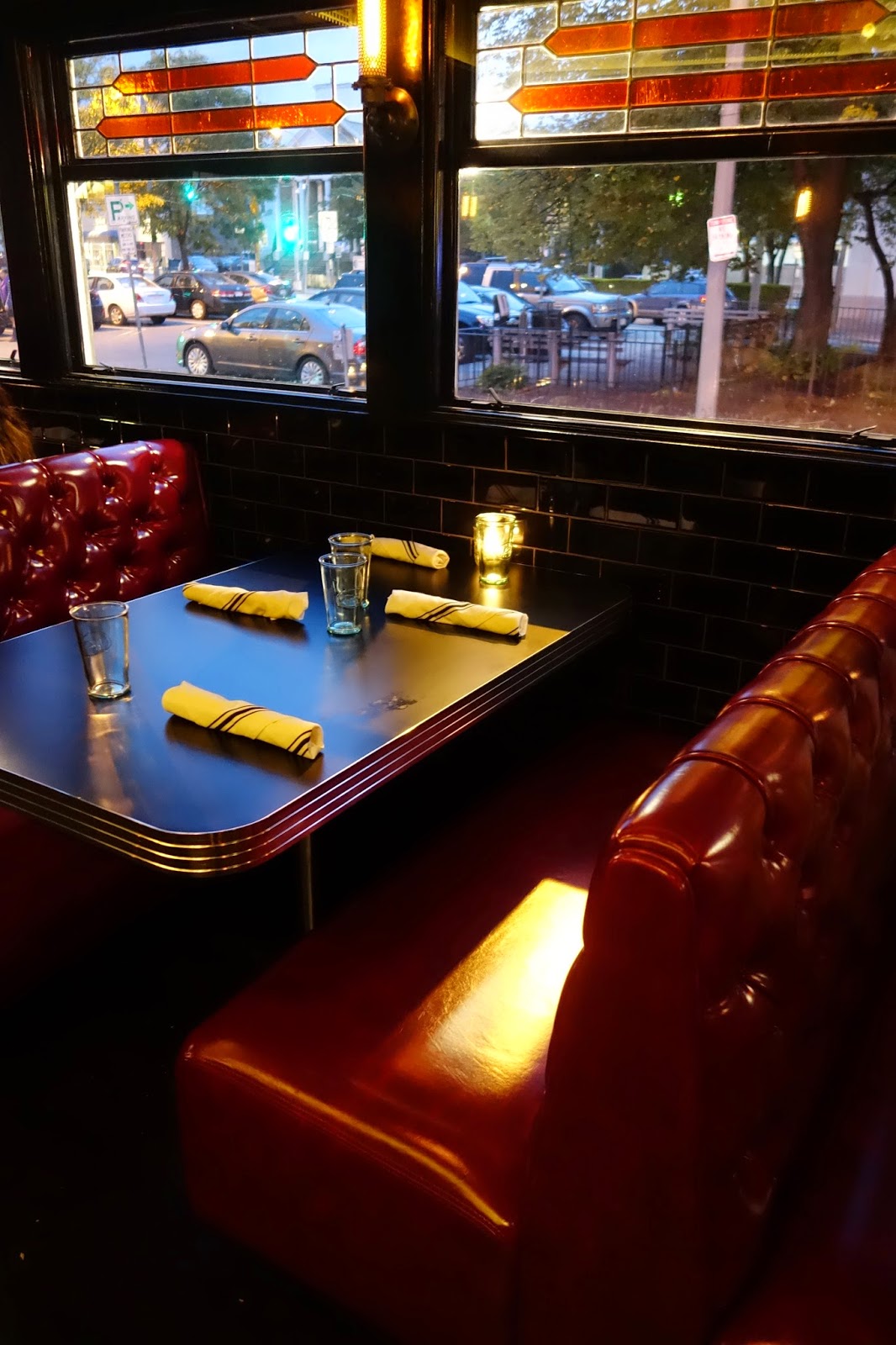 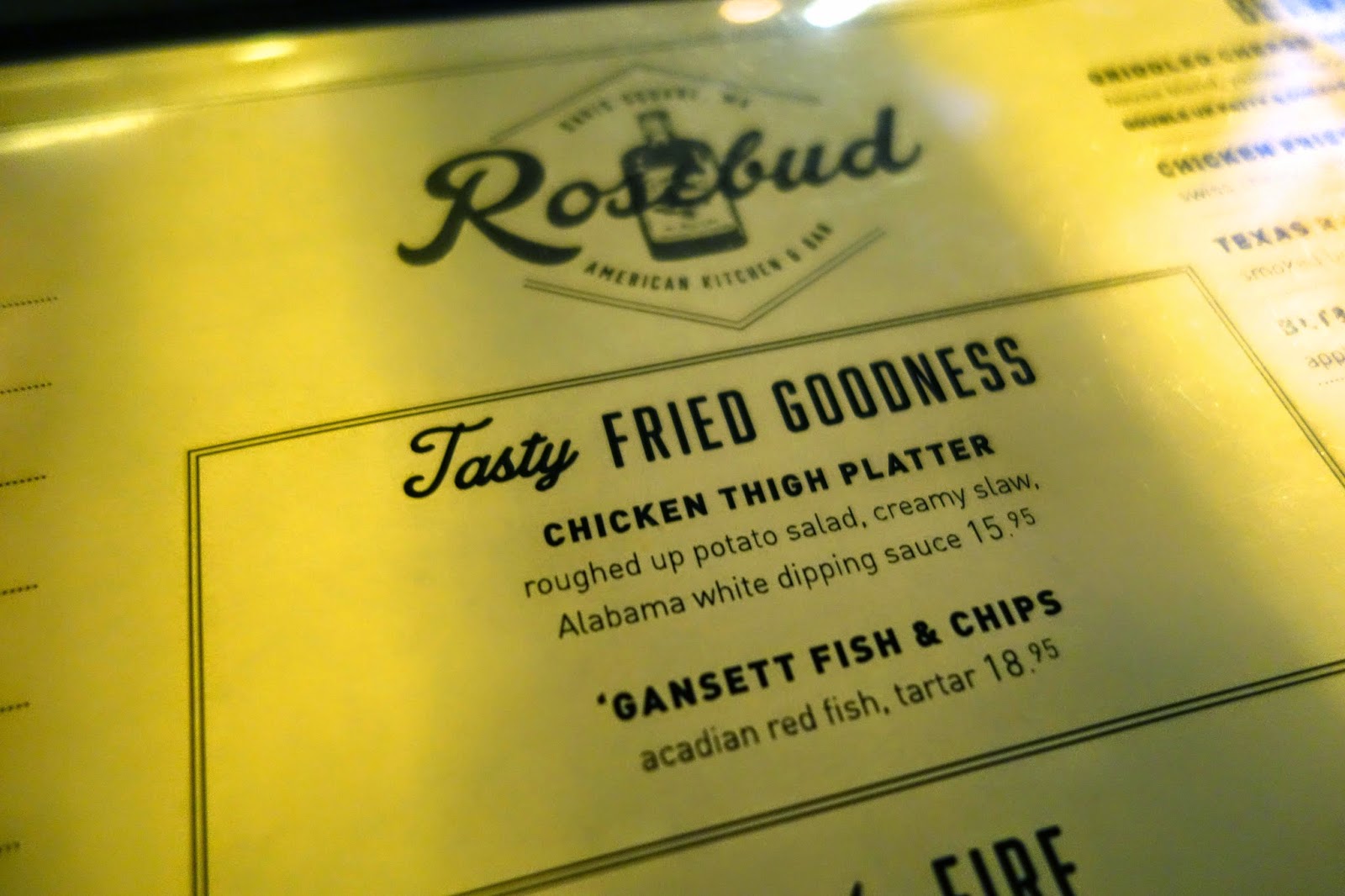 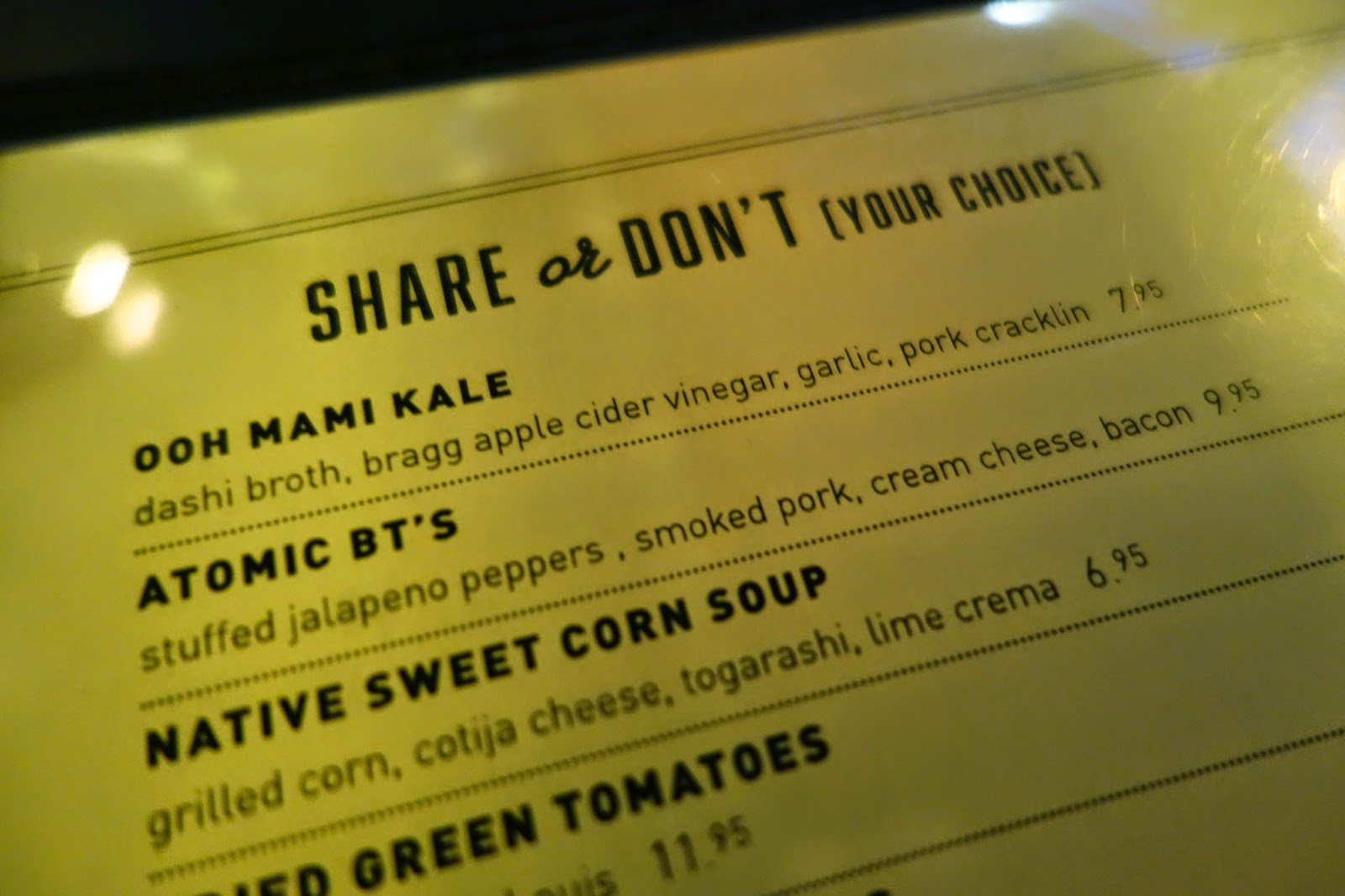 For me, this was a tough menu. There are a few vegetarian choices, mostly small starters and sides, and nothing was really jumping out at me.

To start, we decided to share the grilled cauliflower with sweet chili buffalo sauce and blue cheese. 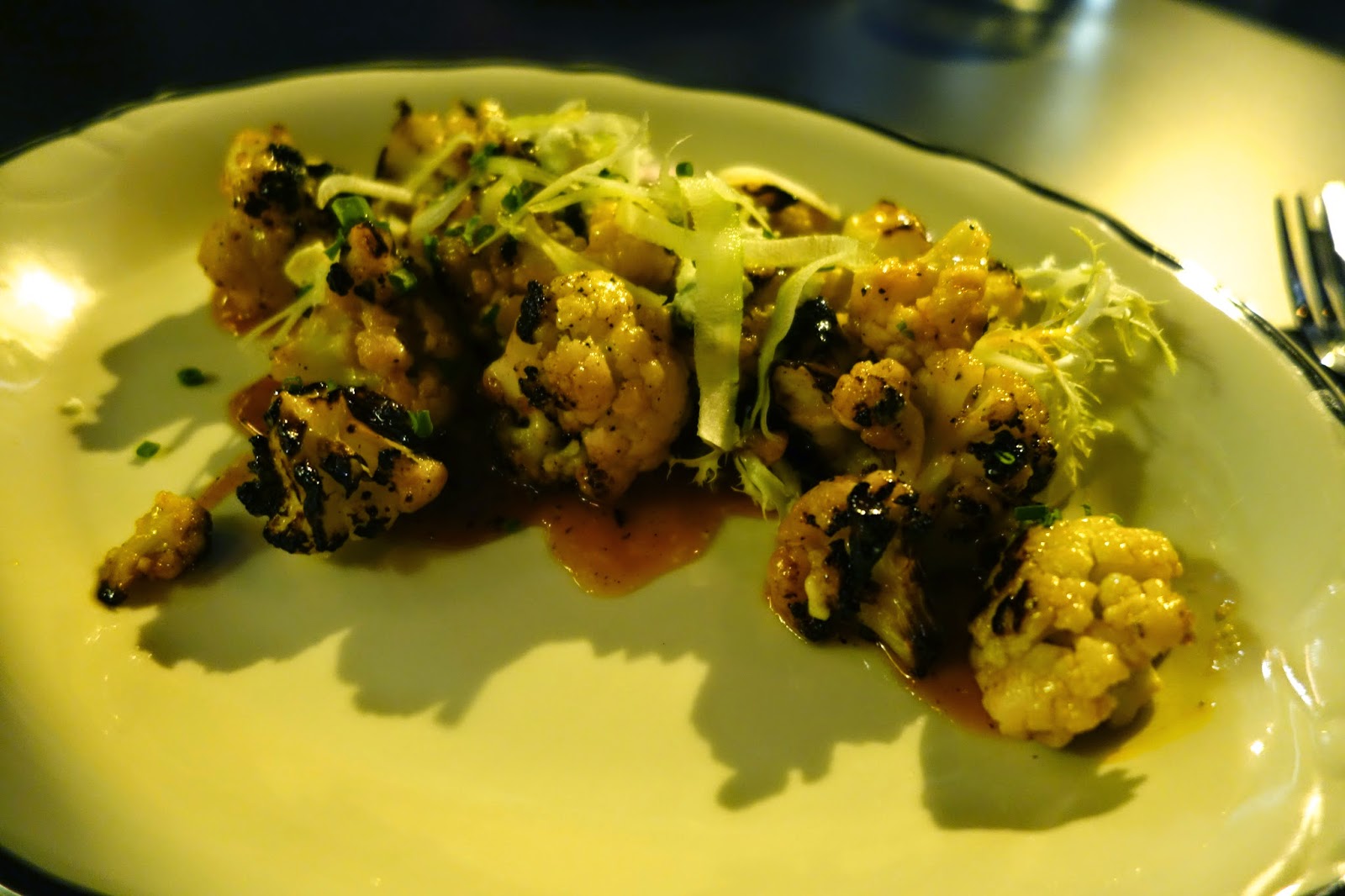 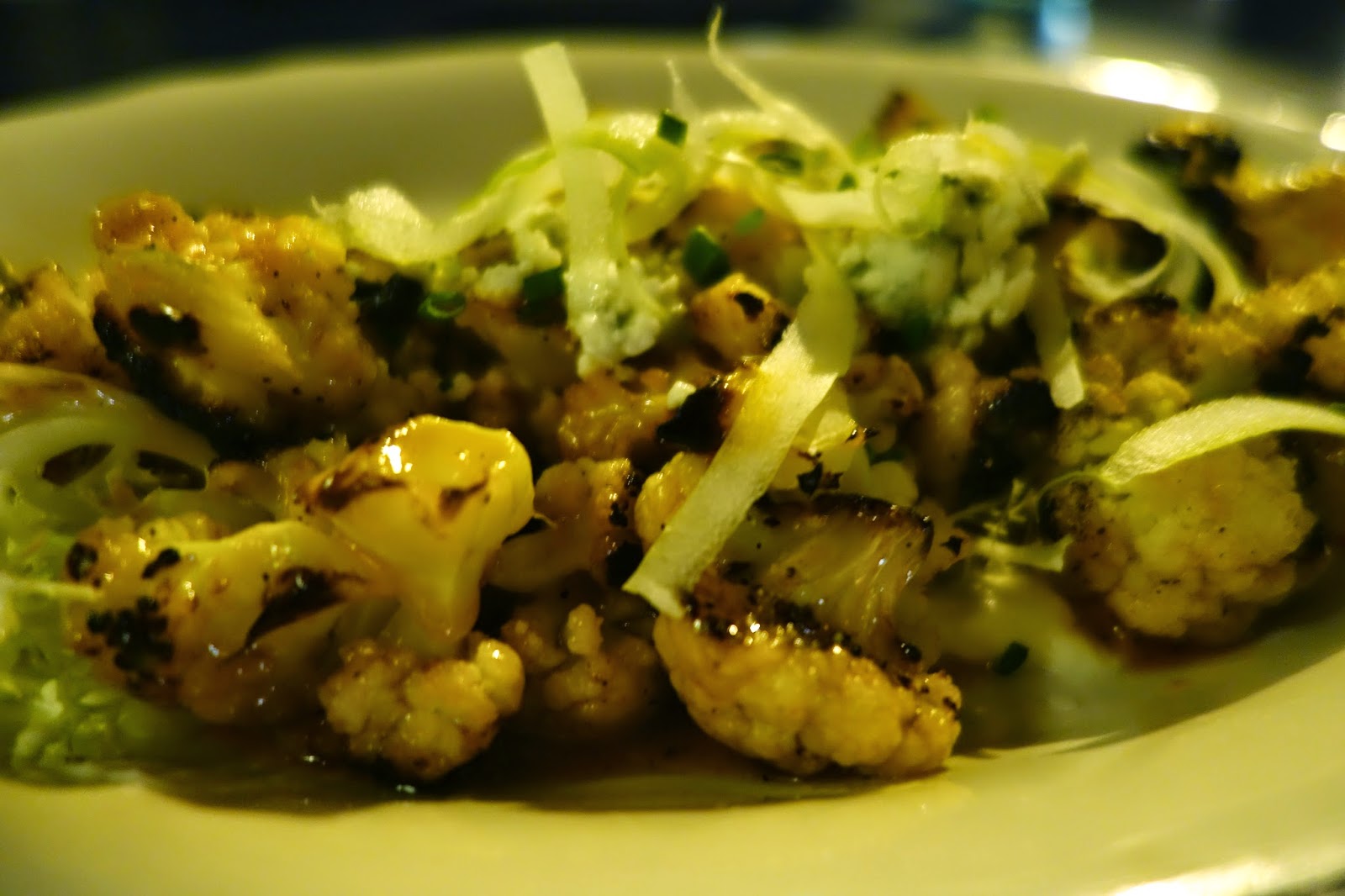 As a vegetarian, I order buffalo sauce any chance I get. I had high hopes for this dish, but the buffalo sauce actually tasted more like an Asian style chili sauce, or even a vinaigrette, than it did a true buffalo sauce.

We also shared the homemade biscuits with honey butter, which was the best thing we tasted all night. The biscuits were fluffy and once you smeared them with the sweet butter, it was pure nirvana. These would be great at breakfast time too. 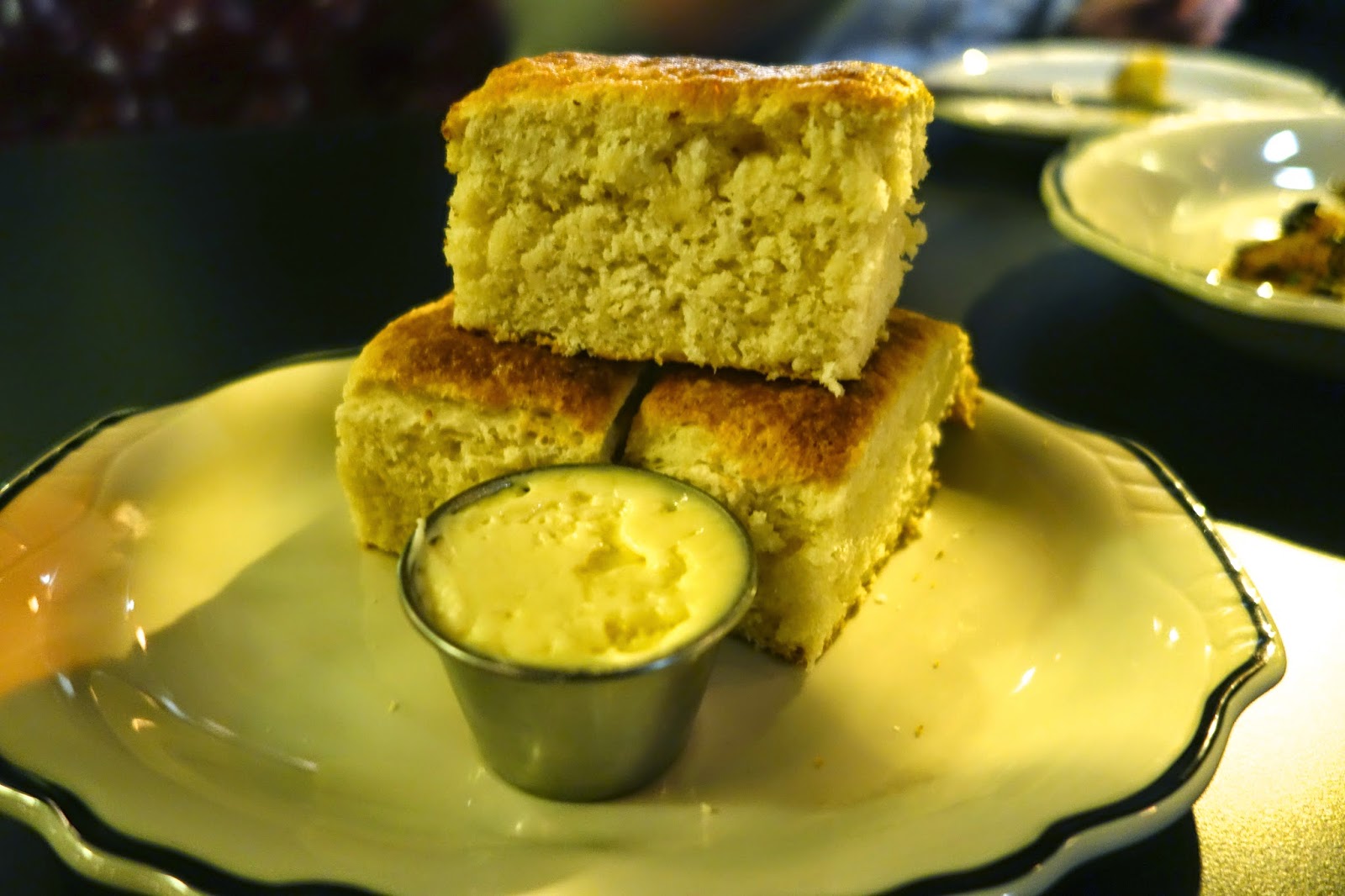 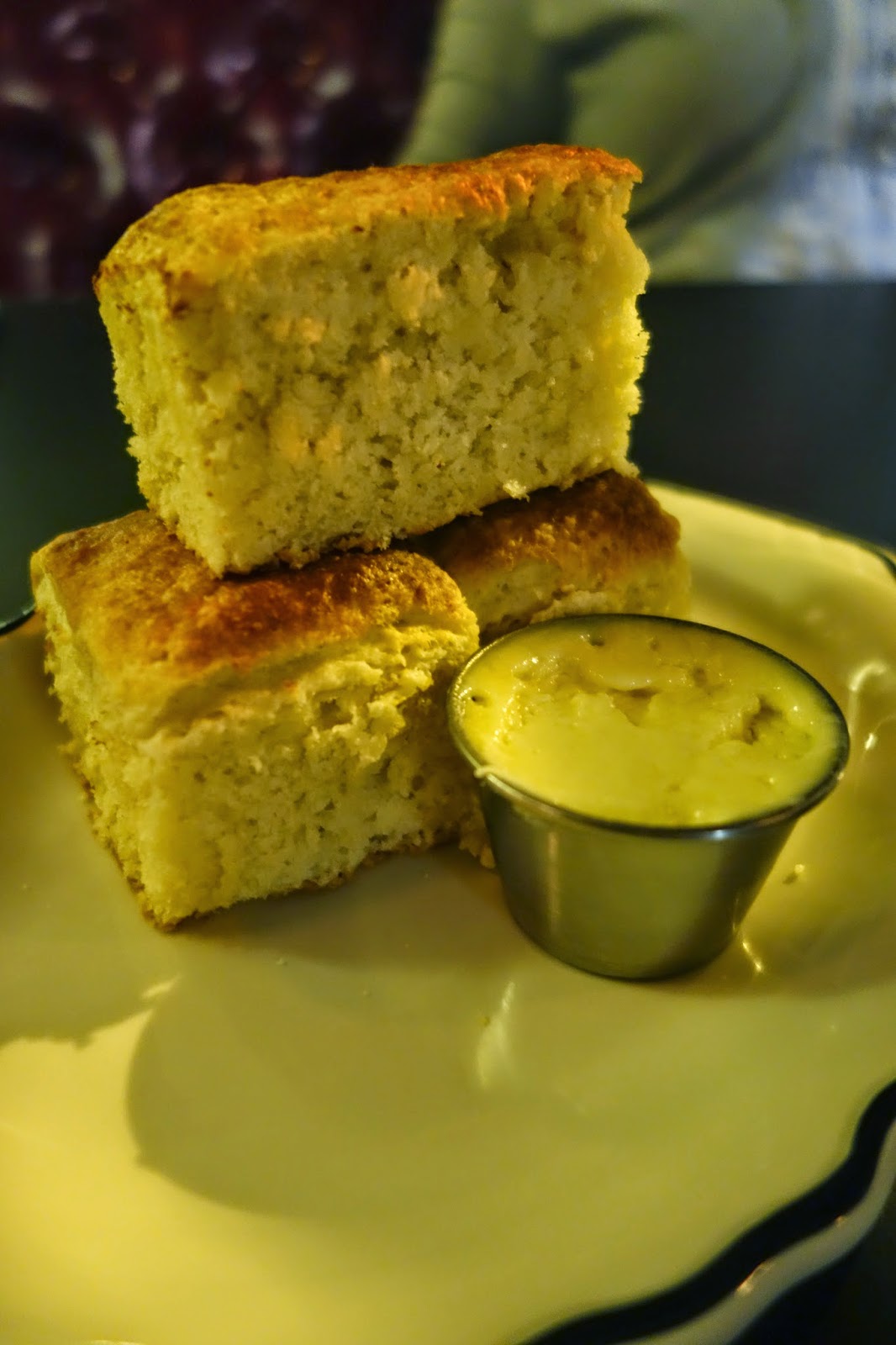 I would also imagine if you are hungover, these biscuits would soak up all the drunken memories of the night before.

For our entree course, we each ordered something completely different. To my right, a friend started with the native sweet corn soup. She said, "I was expecting a creamy broth, but instead it was a vegetable broth, which was thankfully not as heavy. It had a really great, fresh corn flavor and I loved the cotija cheese on top." 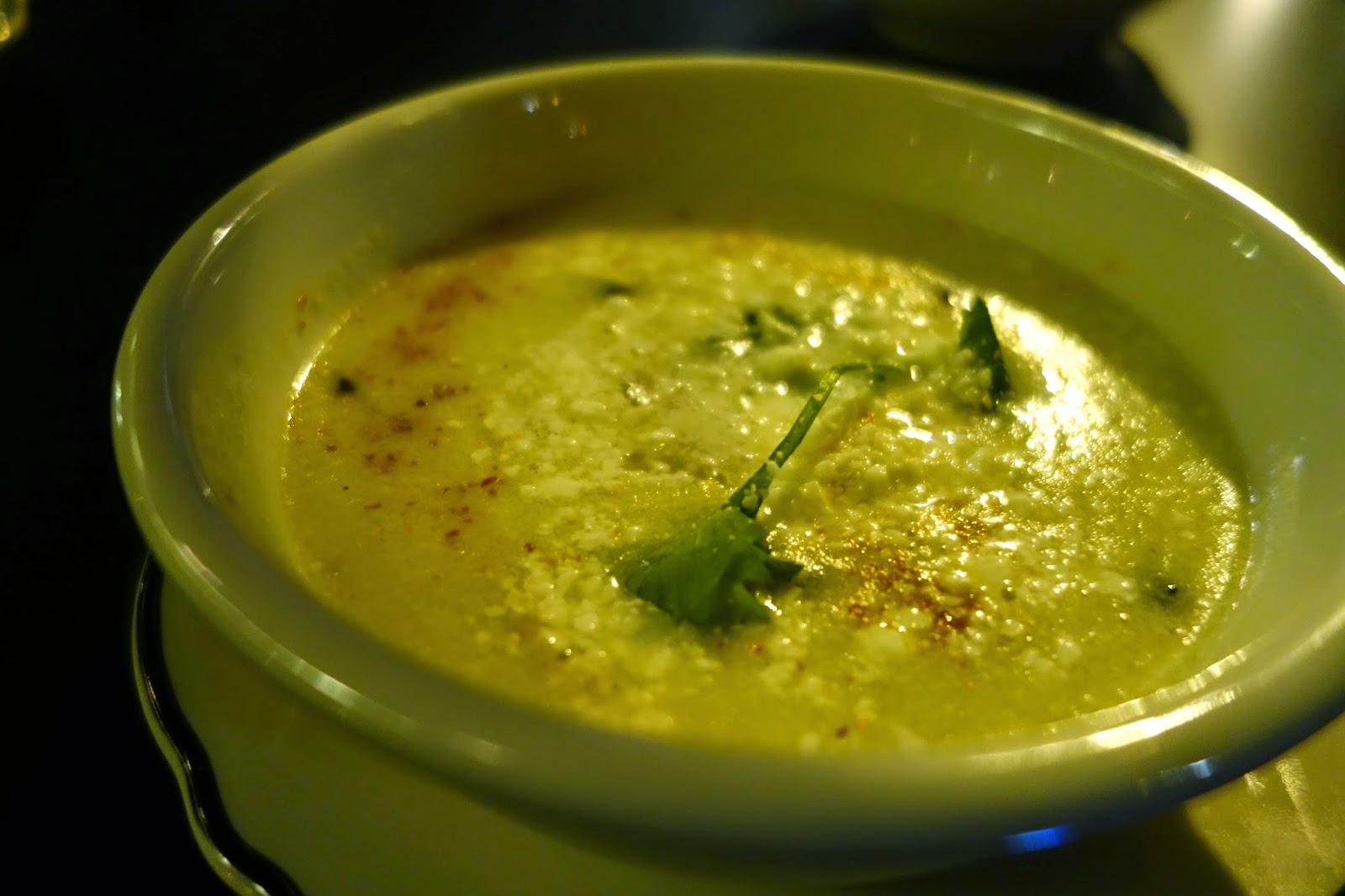 To accompany her soup, she ordered a side of mac & cheese. The Rosebud version is very simple, just shells with American and cheddar cheese. 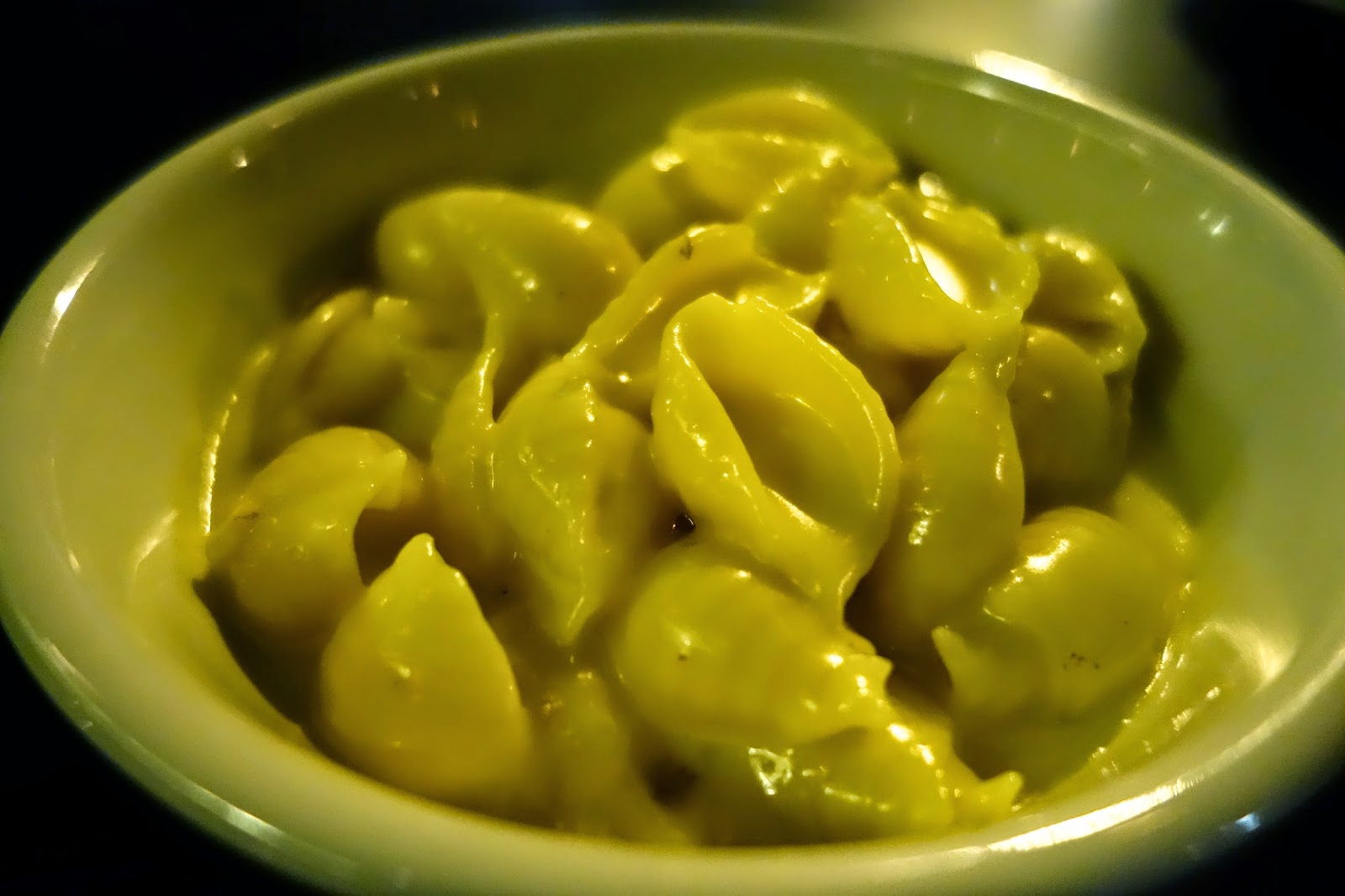 After a few bites she shared, "The shells are cooked al dente, which was nice. The bowl had the perfect amount of cheese to coat every piece."

Across the table, another friend ordered the shrimp and grits. On the menu they are described as gulf shrimp, woosta beer BBQ sauce and stone ground cheddar grits. 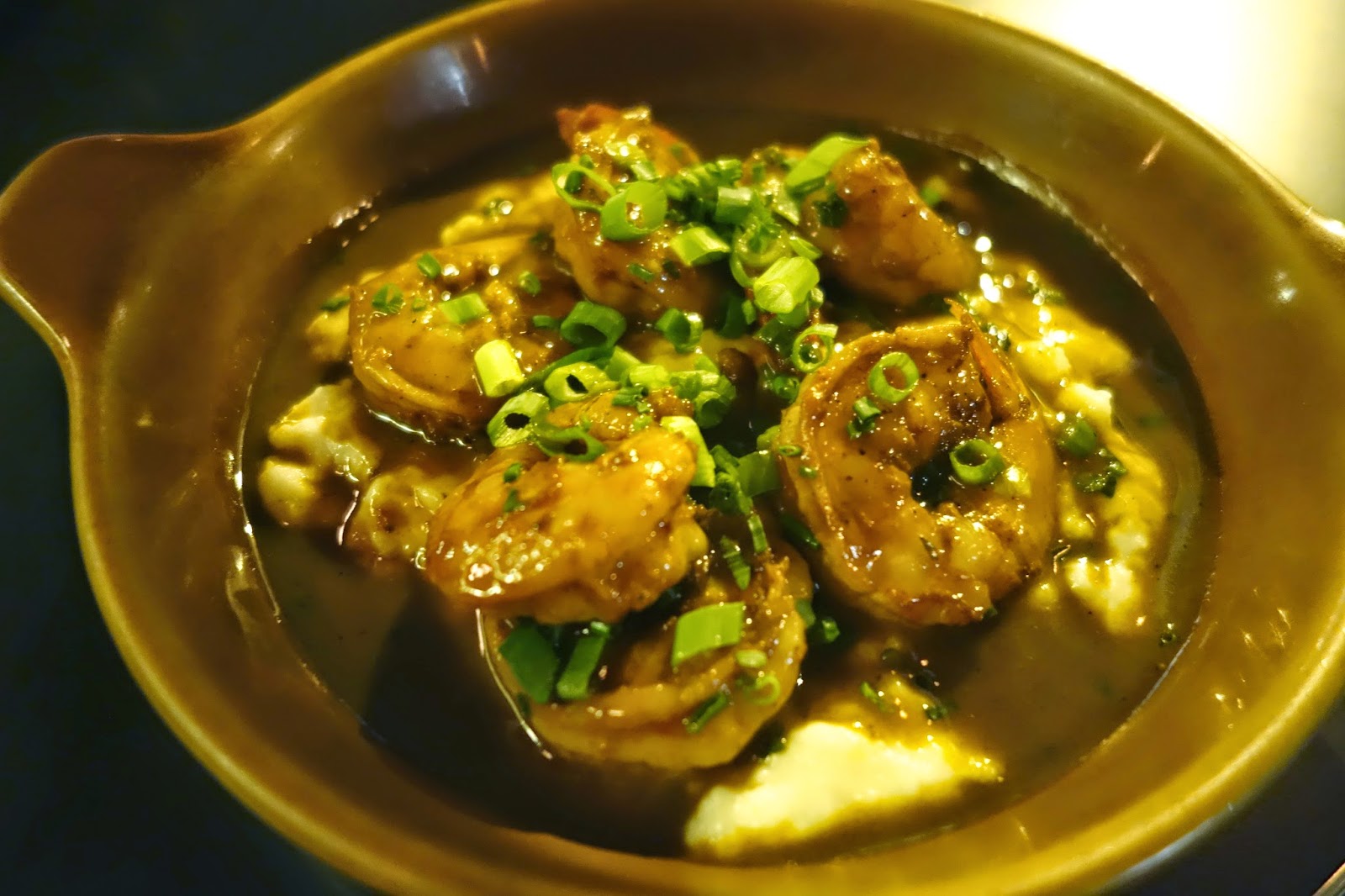 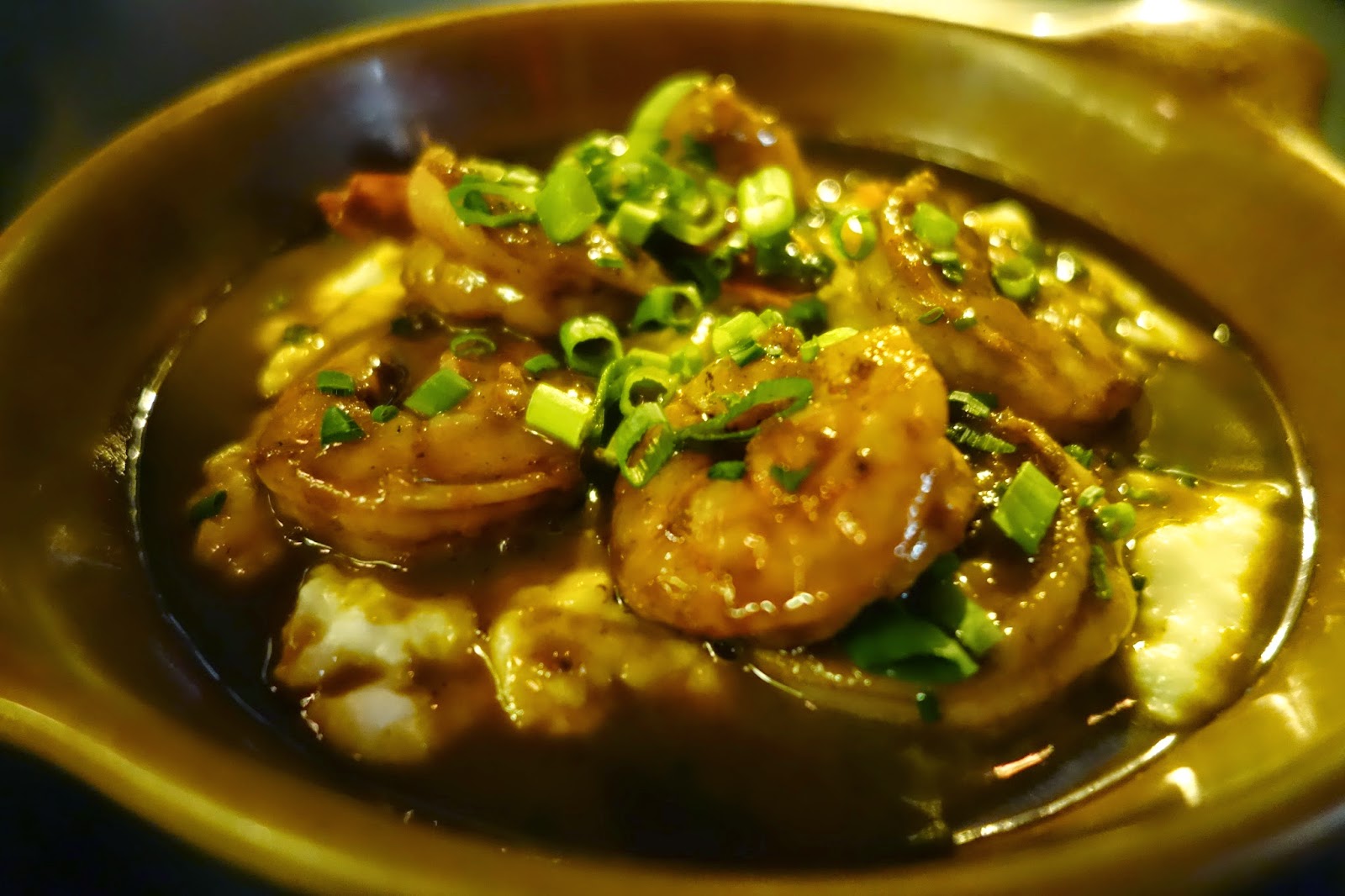 In between shrimp she said, "The BBQ sauce they covered everything with was much spicier than I thought it would be. The grits were really cheesy and delicious, but they were drenched in the sauce, so I couldn't just enjoy their taste independently. That aside, the shrimp was cooked superbly."

When it came time for me to choose a dish I was torn between the falafel sub and the warm zucchini salad. Thinking we might have dessert later, I opted for the lighter dish. 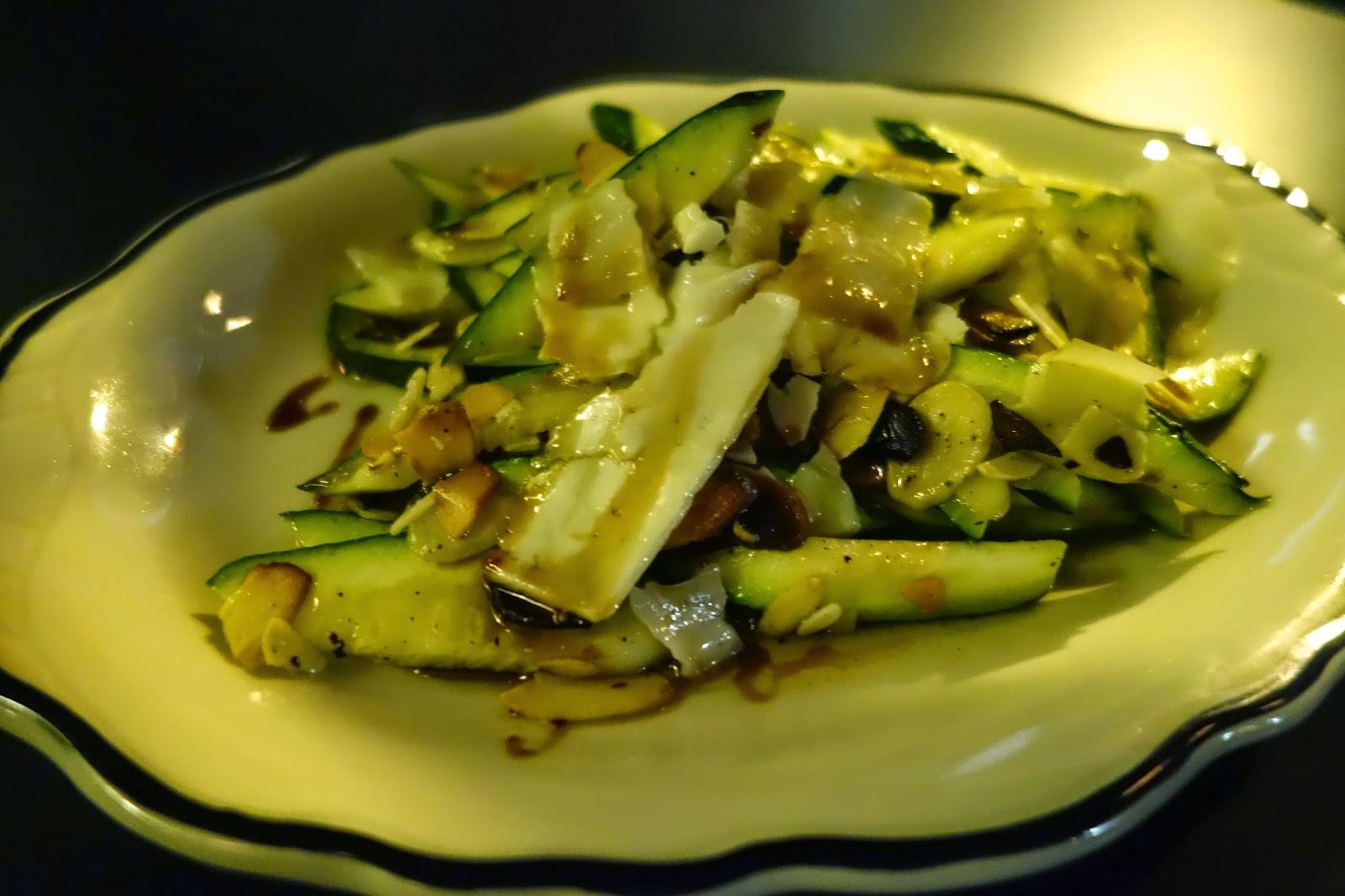 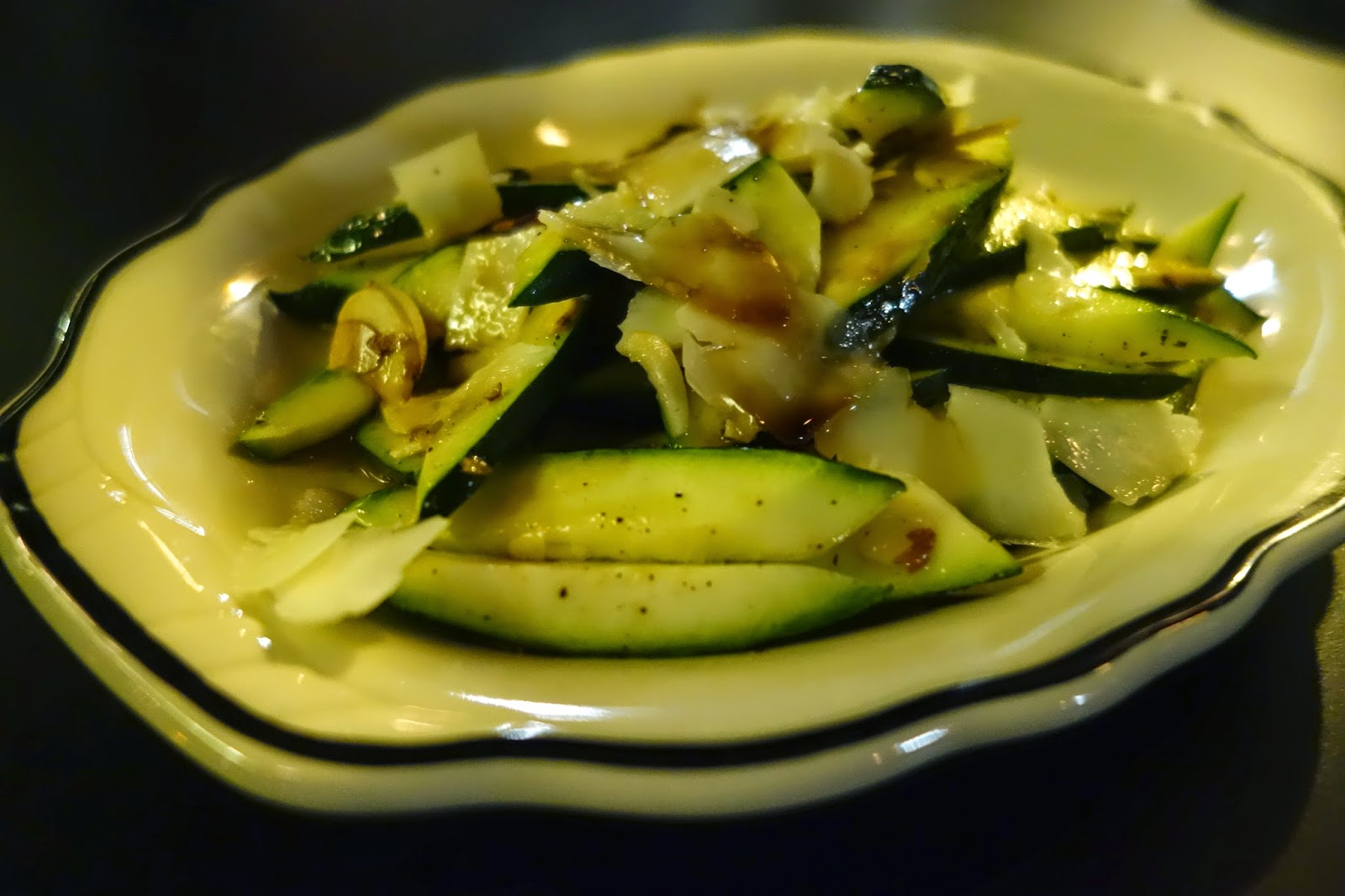 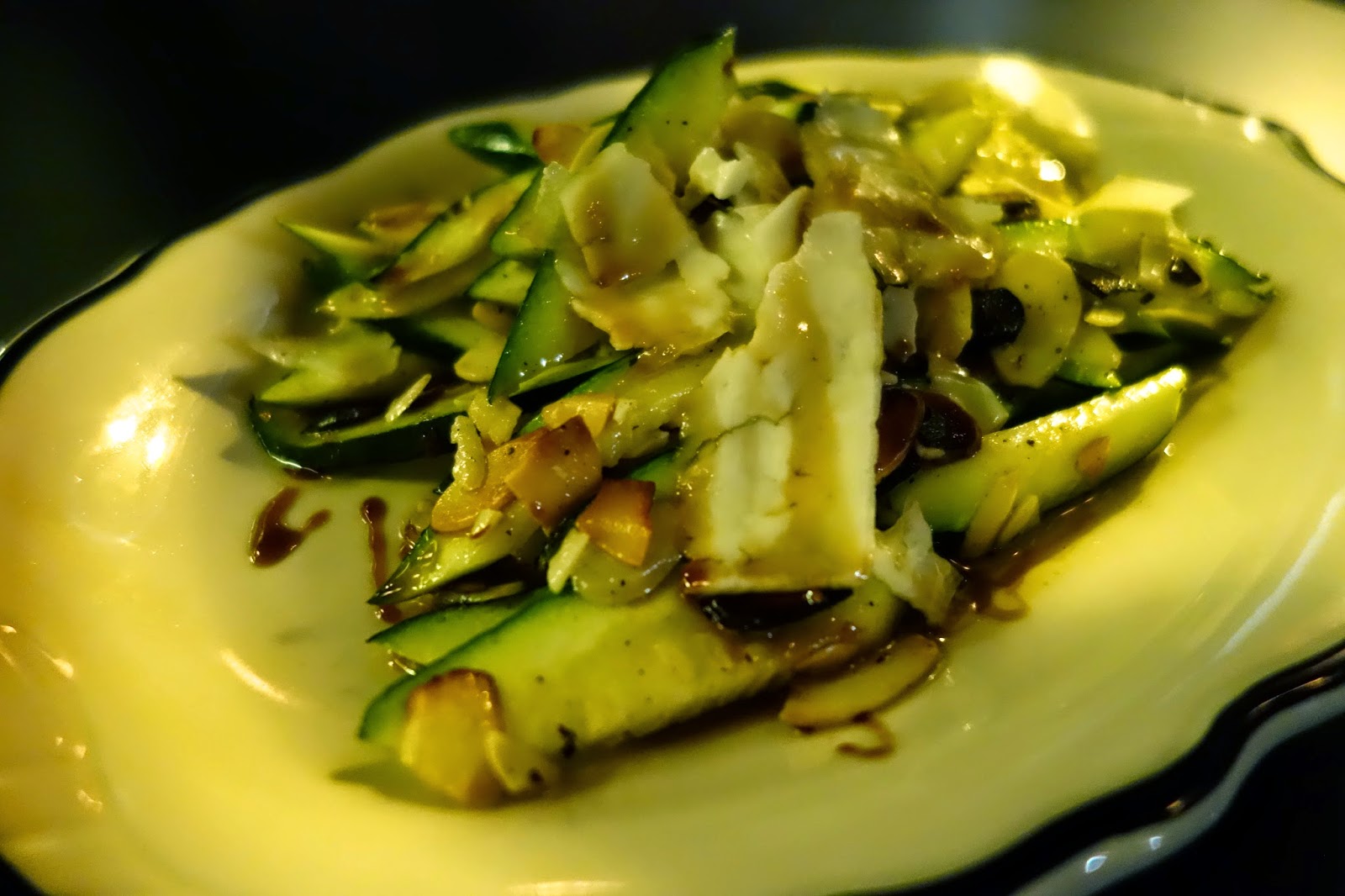 I can't explain it, but when you took a bite with all the components, it tasted like buttered popcorn. Something about the crunch of the slivered almonds mixed with the creaminess of the cheese.

After our dinner plates were cleared, our waitress asked if we were interested in dessert. We always look.

The dessert menu is a list of pies, any of which can be served a la mode. The flavors included ginger blueberry peach, pumpkin, apple cherry ginger, chocolate cream, lemon meringue, fig & plum or banana cream. 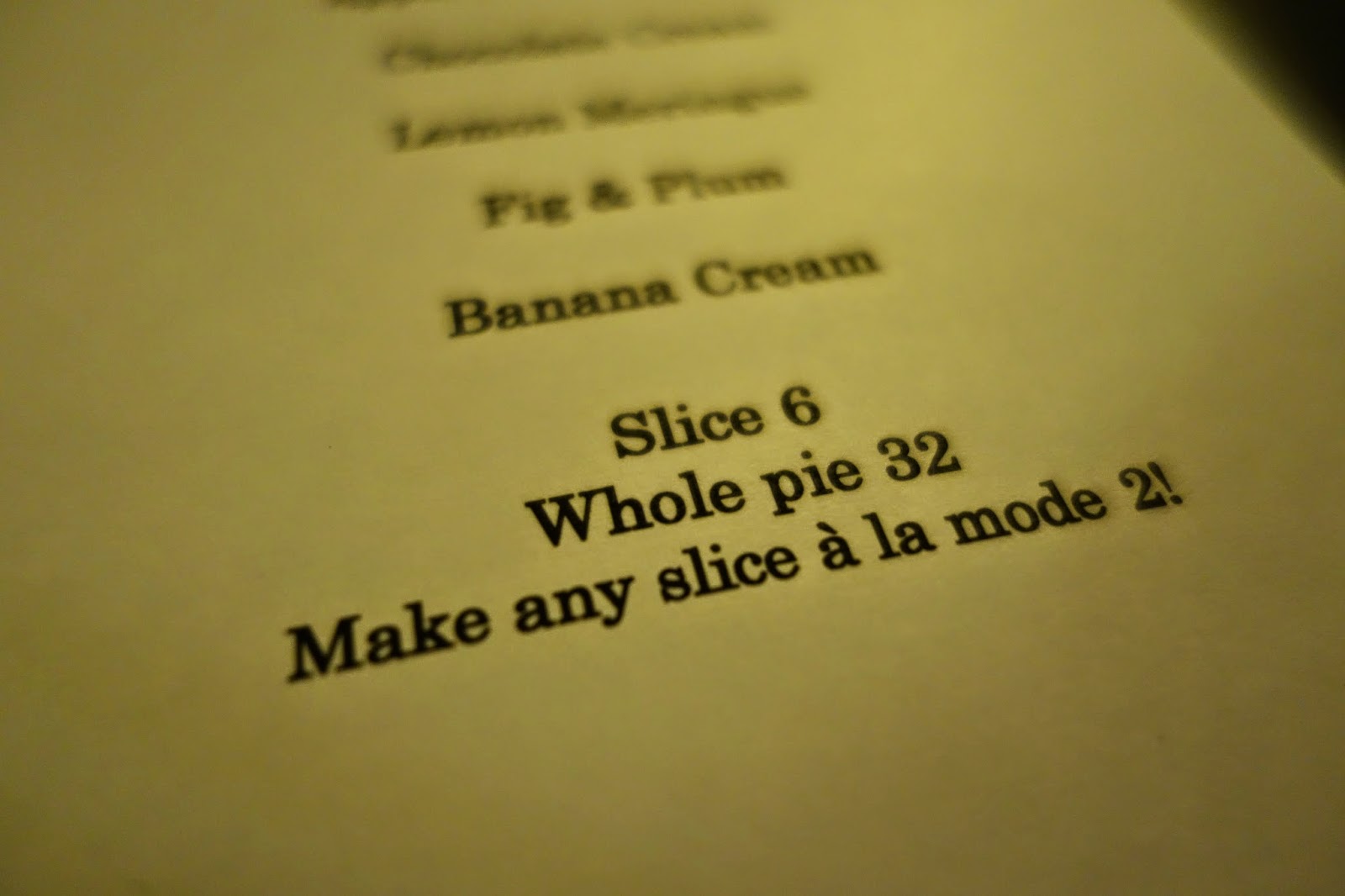 Despite the variety, nothing was really speaking to us. I wanted to go to Pinkberry up the street when one of my friends informed me it had closed a month ago. Devastating!

Overall, our experience at the new Rosebud was just ok. I give them major props on the renovation. The space is beautiful and I'm positive it's going to become a weekend hot spot.

However, the service was painfully slow. At 7:00pm on a Sunday night the dining room was not even half full and it took over 20 minutes for someone to come to our table to say hello and offer to take our order. We actually had to walk to the host stand and inform them no one had come by. The service continued to be spotty all night, with our waitress disappearing for crazy long amounts of time.

If you ever went to the original Rosebud, you have to check out version 2.0. Go for a drink at the bar or a plate of fluffy biscuits.

Did you visit the Rosebud in its opening week? What did you think of the revamp?

I could go for those shrimp and grits right now.

oh man i hope their service shapes up!! really cool space though!

American Newly designed kitchens are become common demand in new consecrations and people want to use best equipment in them. Many people read reviews to find uk essays review for hire online and get positive results with this option.

It is somewhat fantastic, and yet check out the advice at this What Mobile.

ยอดเทิร์น คือ
is another channel in earning

ยอดเทิร์น คือ
is another channel in earning 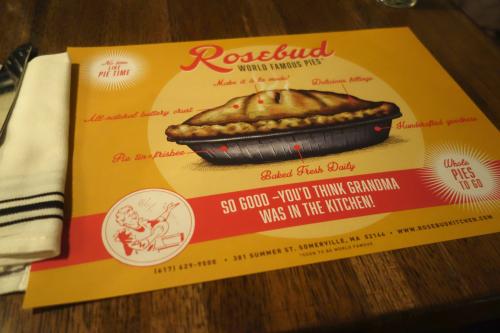 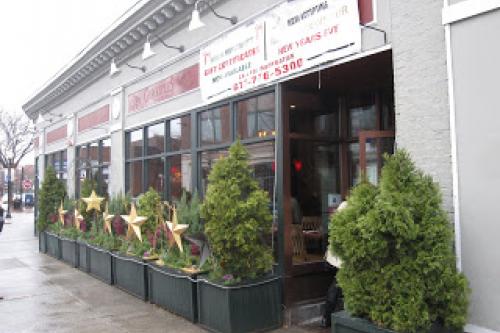 Dining Out: Gargoyles on the Square

For years I have been wanting to check out Gargoyles on the Square in Somerville. I have several friends that live in the area, so I could have gone anytime, but it took a friend forwarding an email to me to actually push me into making a reservation. The aforementioned email was from Urban Daddy and highlighted a new brunch special at Gargoyles: red velvet pancakes. Um. I'm in. 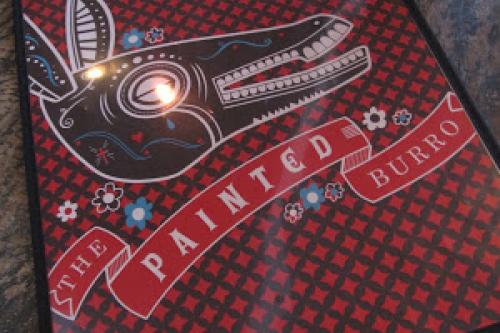 Dining Out: The Painted Burro

A few months ago all of the Boston food and restaurant blogs started reporting that the owners of Davis Square's Posto were planning to open a Mexican restaurant a few store fronts away in the space formerly occupied by Gargoyles on the Square. About three weeks ago the Posto crew opened their new baby, the Painted Burro ("burro" means donkey in Spanish). On Monday night I went with three of my favorite girls to check it out. This adventure combined three of my favorite things: trying a new restaurant, guacamole and tequila!