Dining Out: The Abbey (Part II)

In the winter of 2011 I met a group of friends at The Abbey in Brookline to celebrate our friend's birthday. The evening was a total disaster (you can read about the train wreck here) and I swore I would never return. So when a friend suggested we try a new restaurant on Mass Ave in Cambridge by the same name, naturally my first question was, "Any relation to the one in Brookline?"

Well, it turns out that The Abbey that has just opened in Cambridge, is in fact, a sister restaurant to the original. Despite coming from the same family, these two spots couldn't be more different.

The Abbey in Cambridge is located just two short blocks from the center of Porter Square, next to the famed Judy Jetson hair salon. The exterior of the space is about 20% brick and 80% windows. 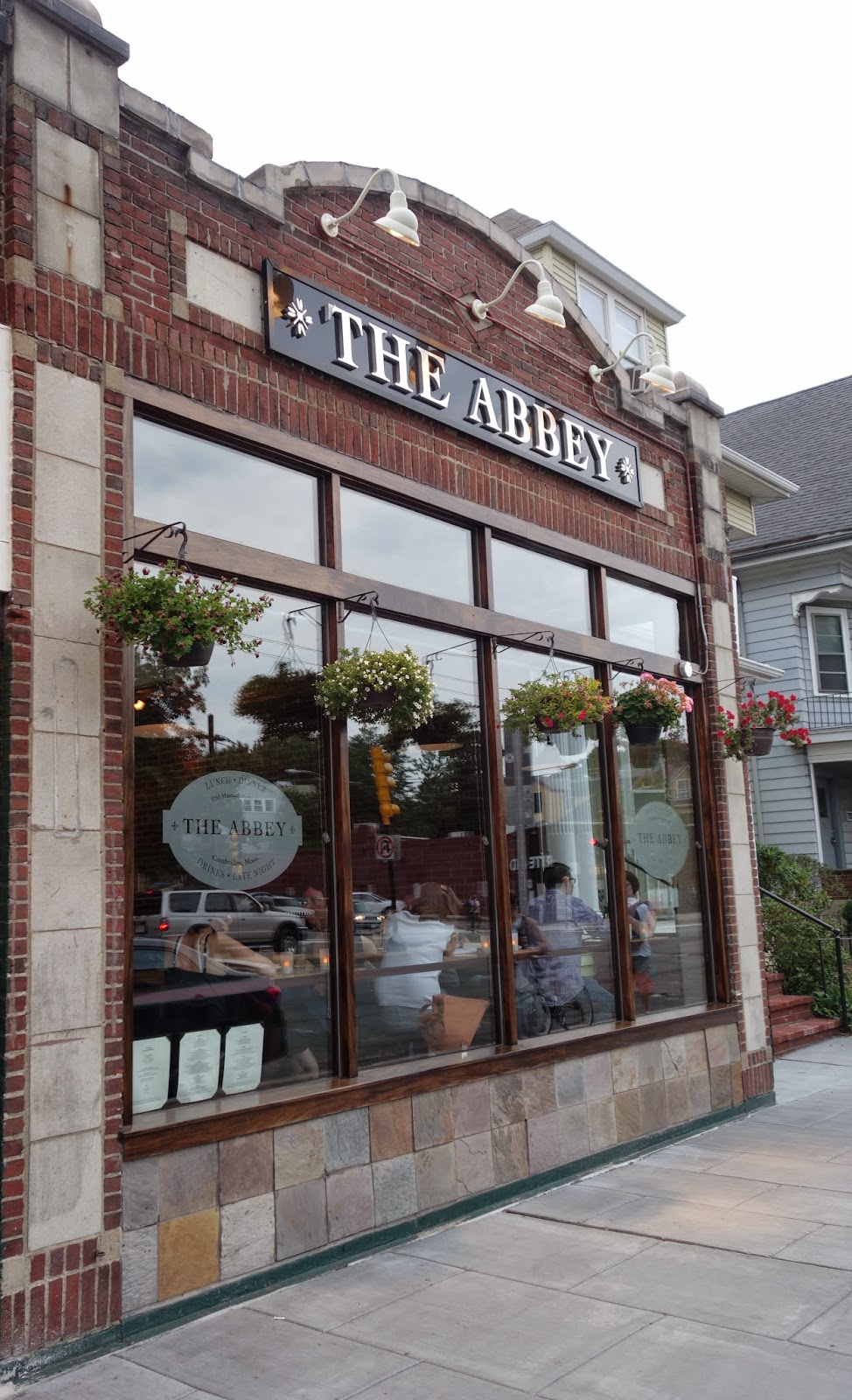 Inside the restaurant there is a row of high top tables with fantastic people watching views. 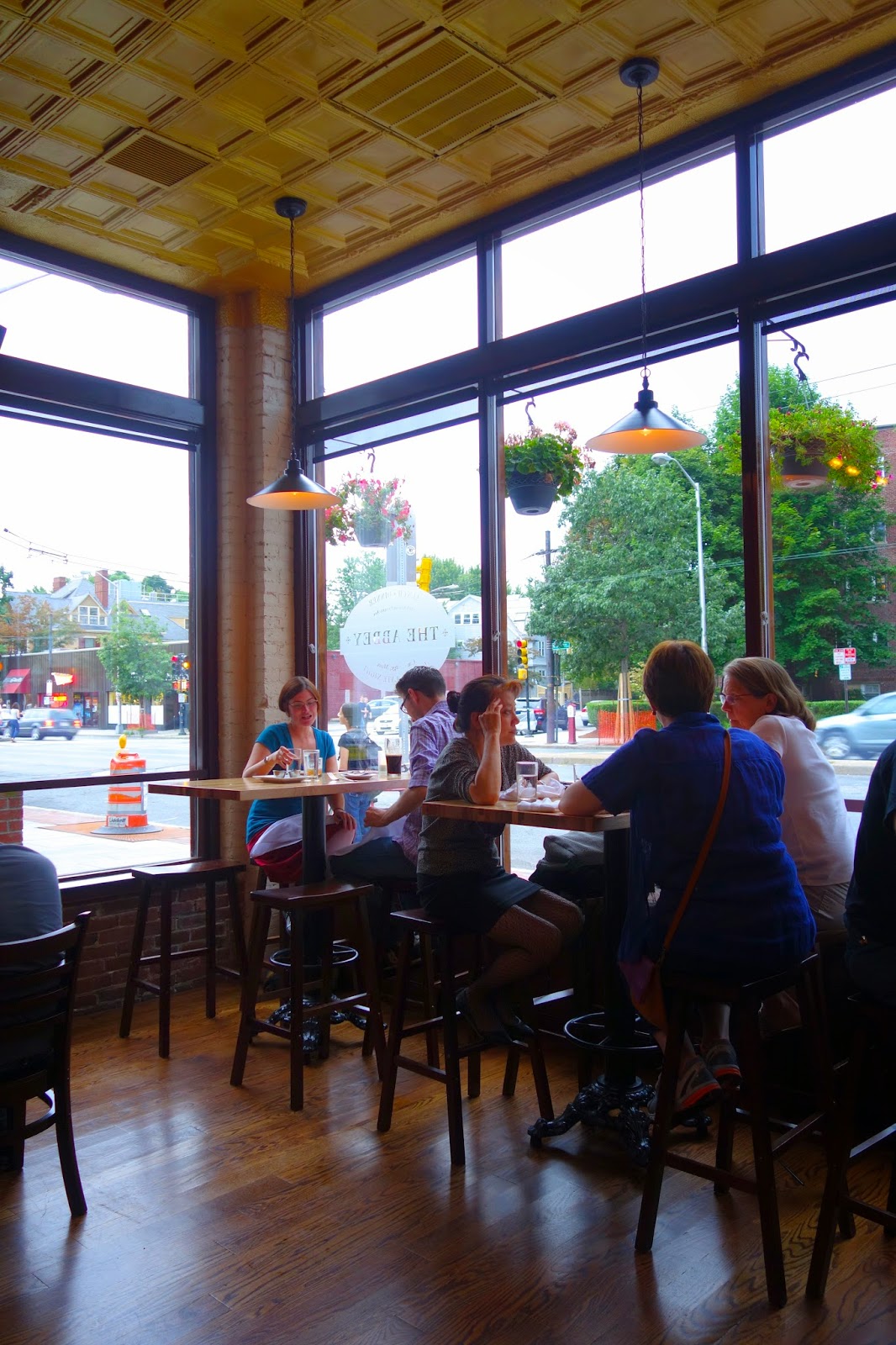 While snapping the above photo, my dinner date pointed out that the ceiling of the restaurant is one of my favorite colors, gold. A gilded ceiling? Oh yes. The decadence of the gold ceiling is beautifully juxtaposed with the industrial look of the exposed brick.

We arrived around 7:15pm and all the tables in the dining room were full. The hostess offered us the chance to sit at a table in the basement level dining room or to grab the last two seats at the bar. Not wanting to give up the window views, we opted for the bar. 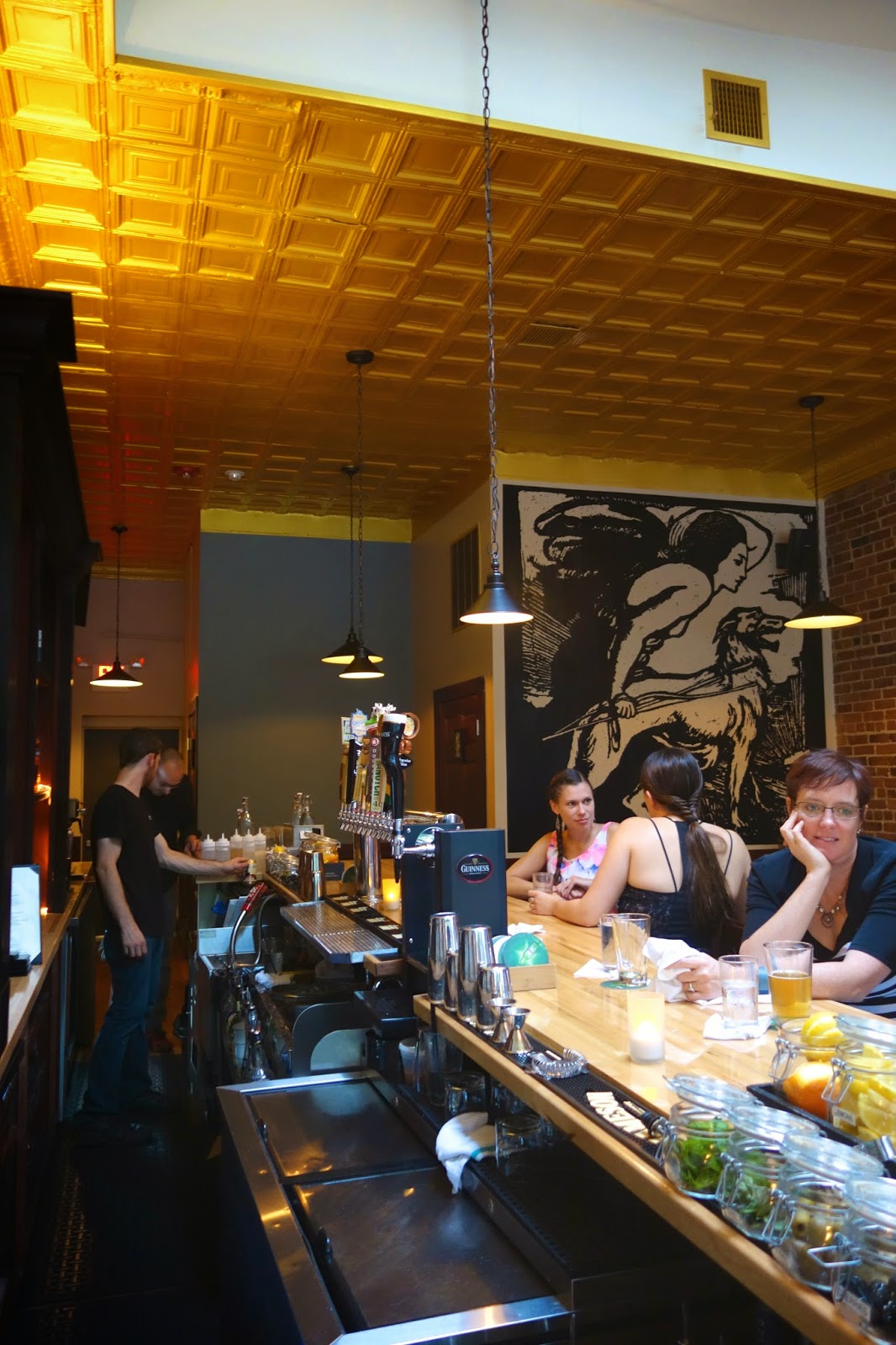 Once we were seated, our very friendly bartender offered us the drink menu. In chatting with him we learned that he was part of the construction crew that built the Brookline restaurant and he's been with this new location since they opened nine weeks ago. 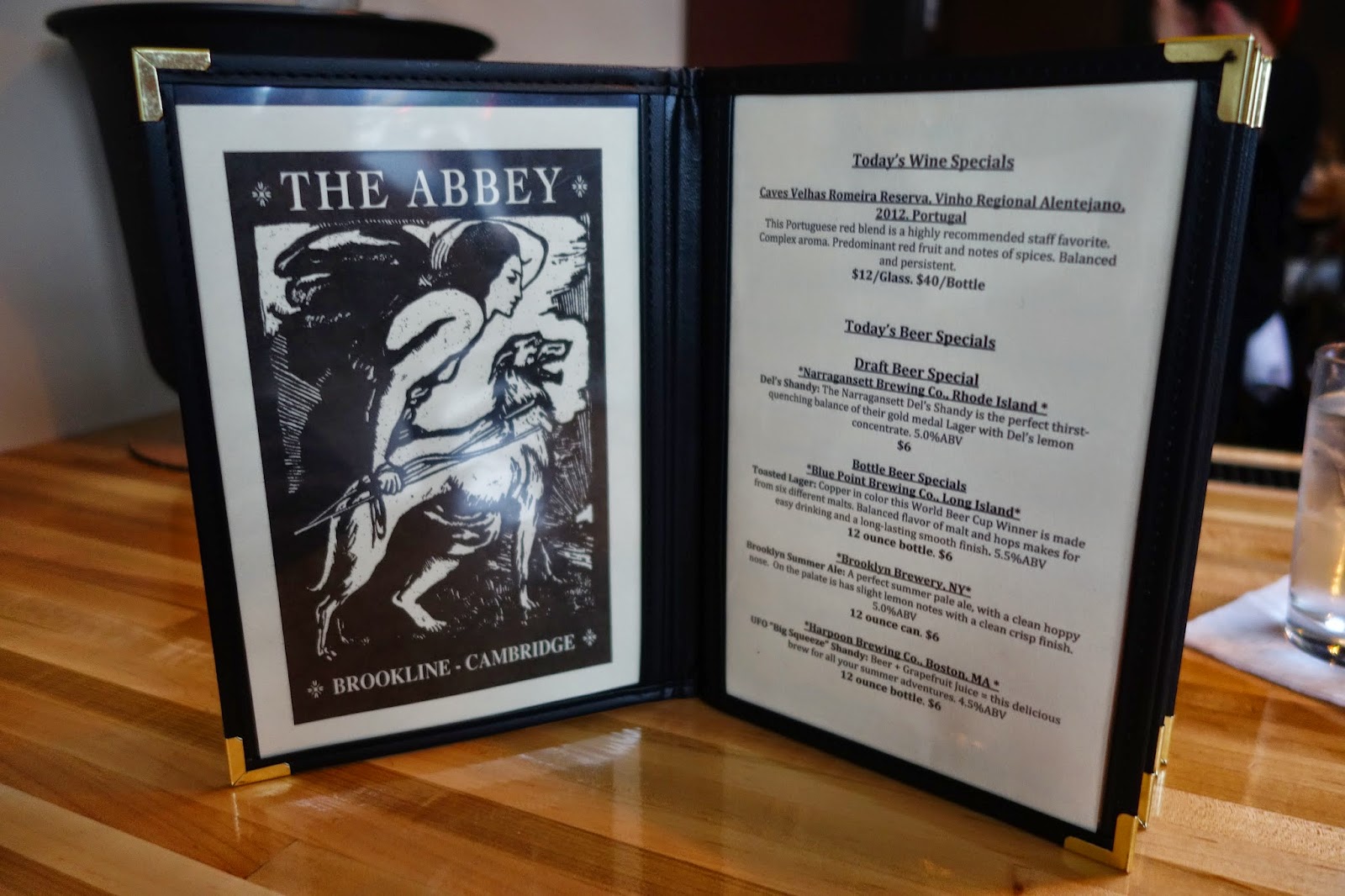 Since it was Friday, we were desperate to toast to the end of the work week. My friend ordered the pineapple jalapeño margarita. It was tequila, jalapeño and pineapple garnished with a slice of lime, a slice of orange and a chili-sugar rim. 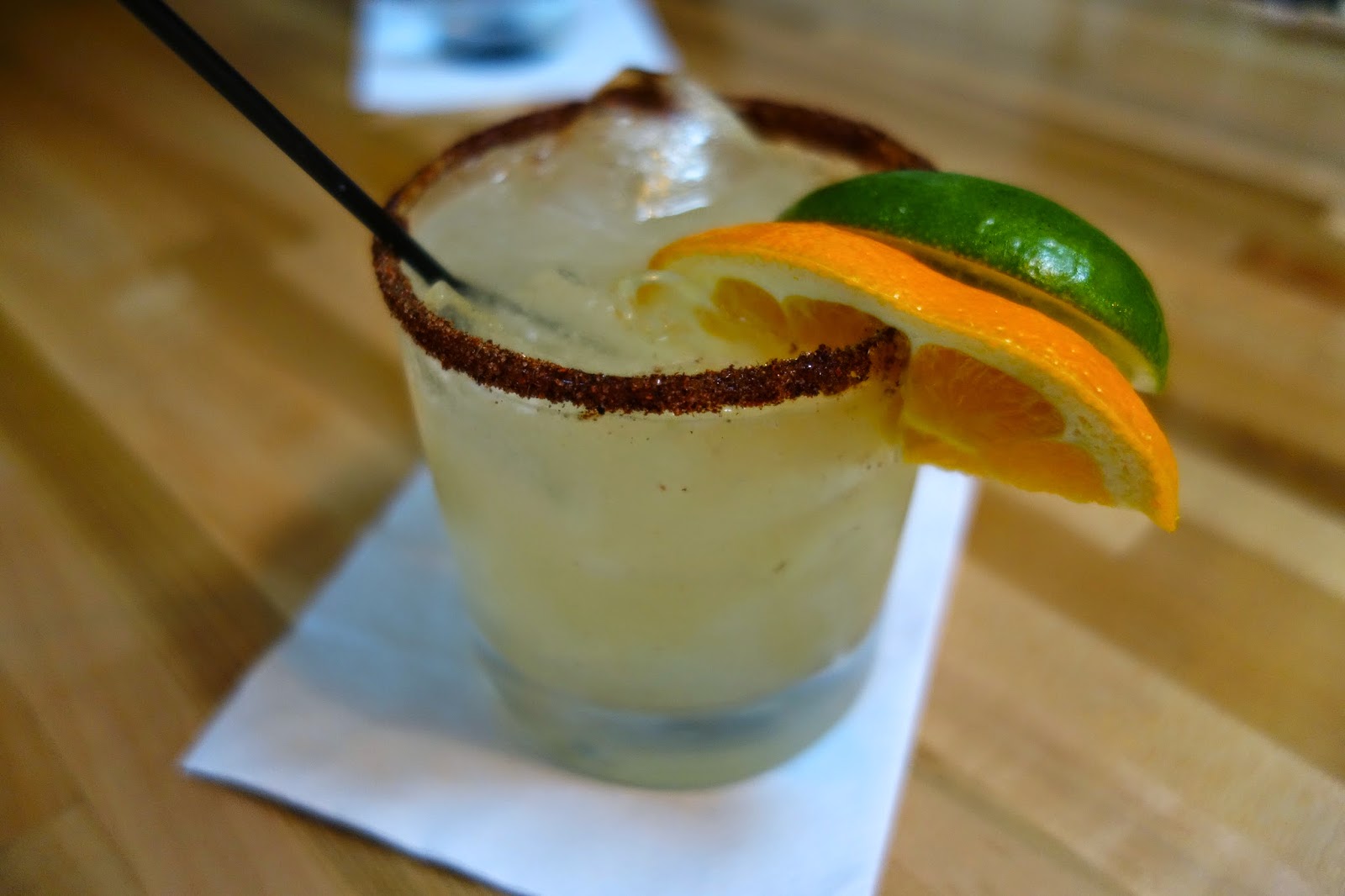 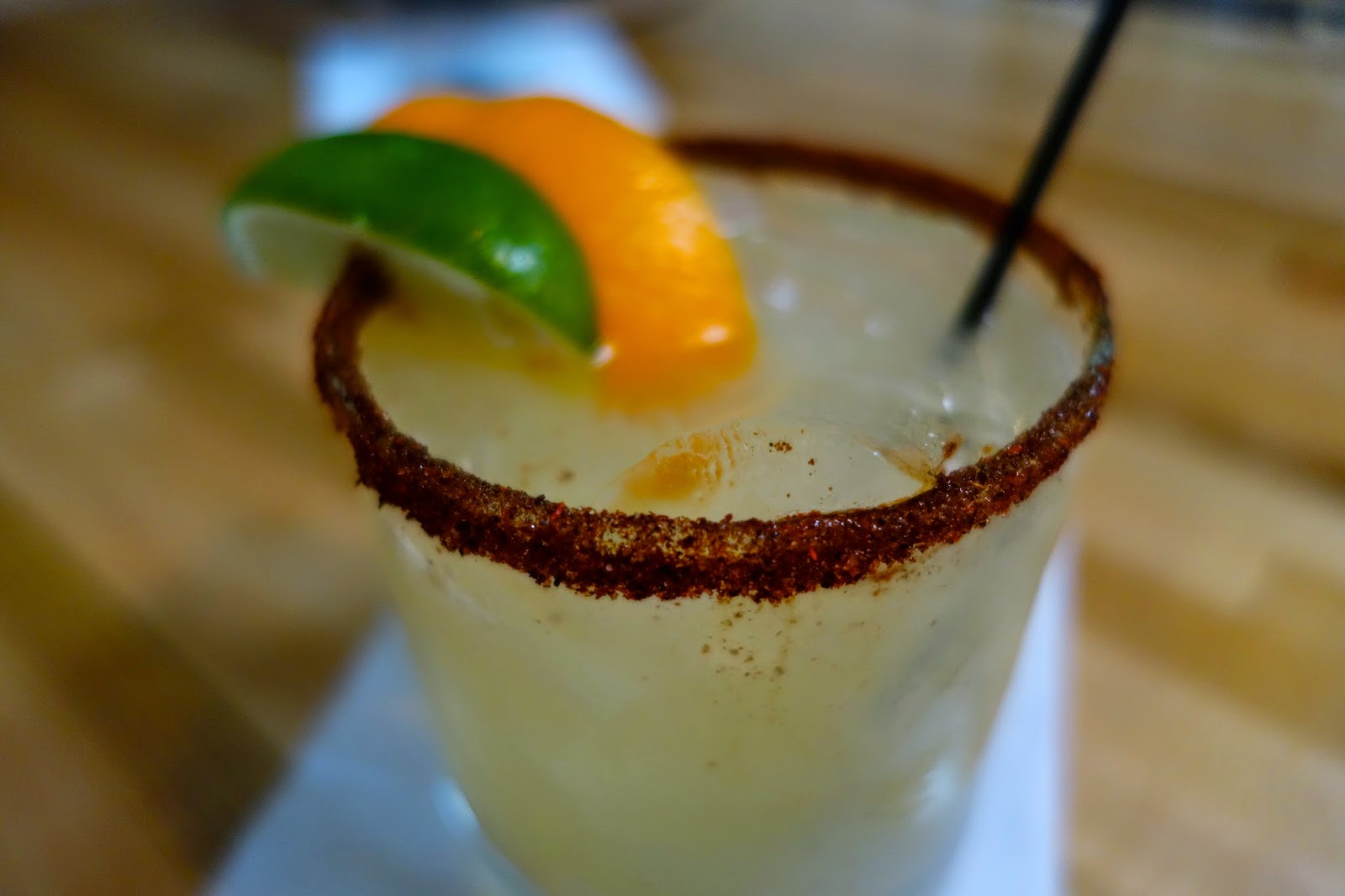 After discovering a few weeks ago at Deep Ellum that I actually do like bourbon, I decided to order the Abbey Julip. It was bourbon, aperol, simple syrup, lemon juice and ginger beer. 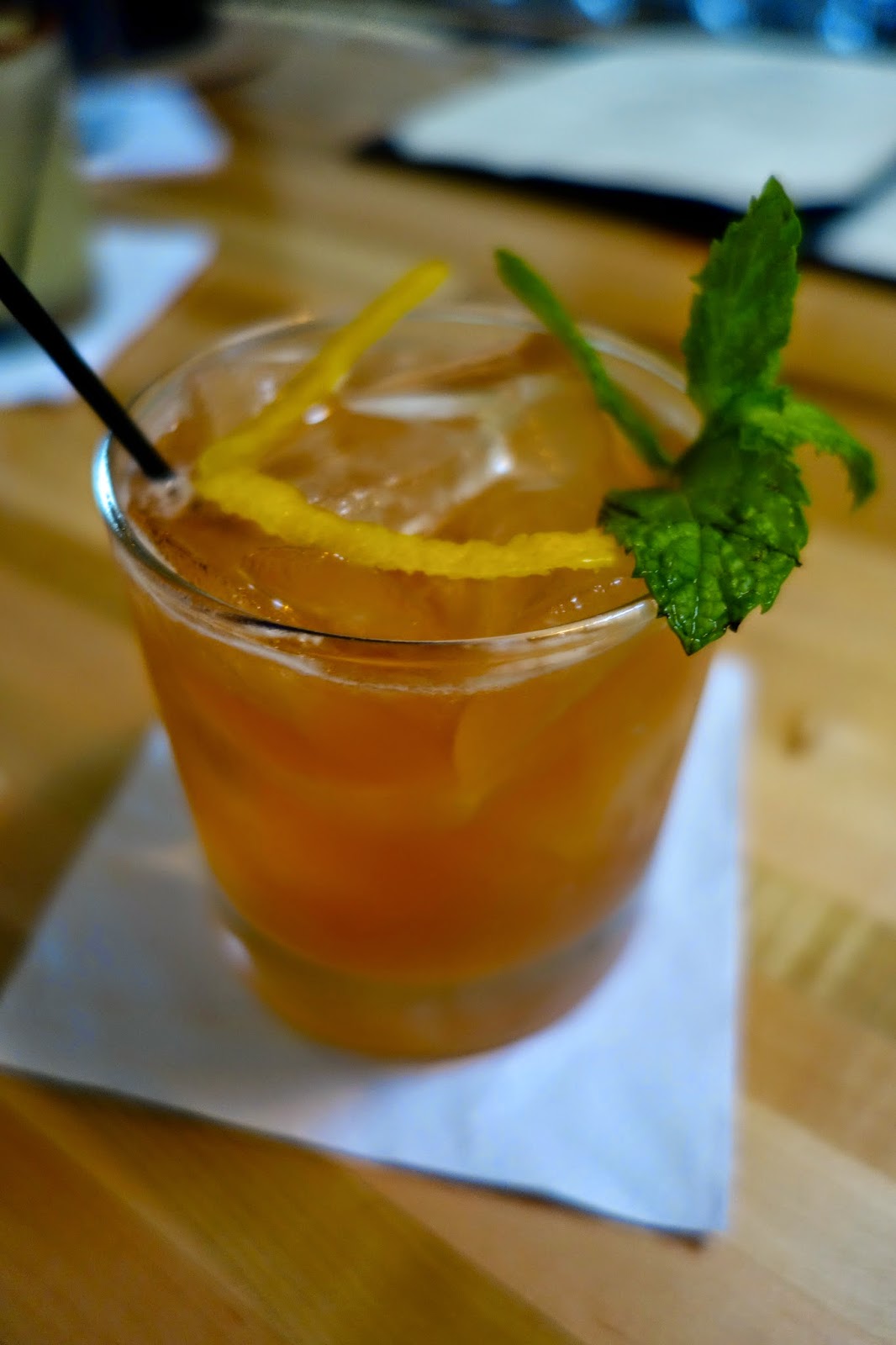 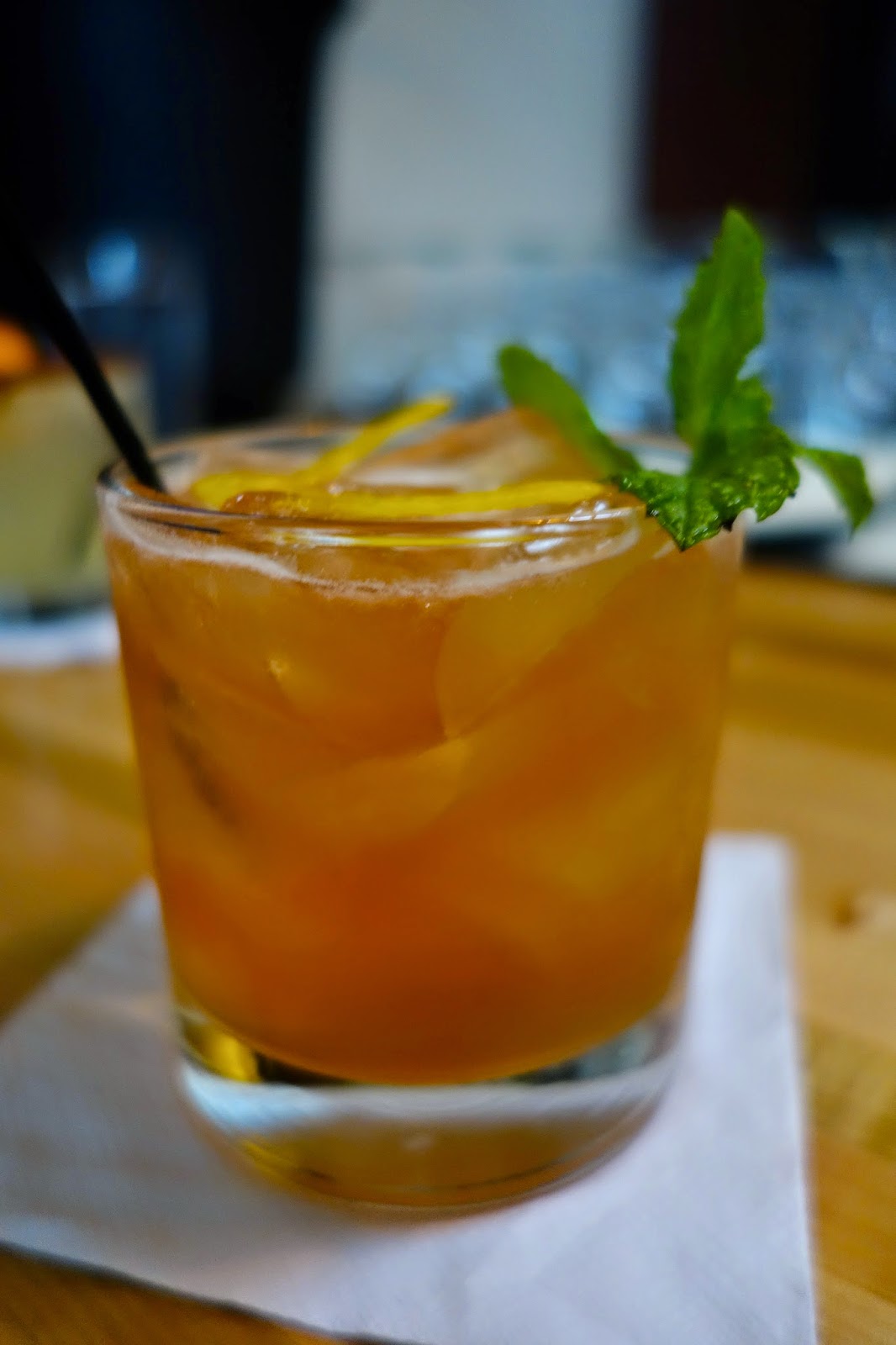 The drink was garnished with a sprig of mint and a lemon rind shaving. Even my lemon rind was happy it was Friday. Look at that smile! 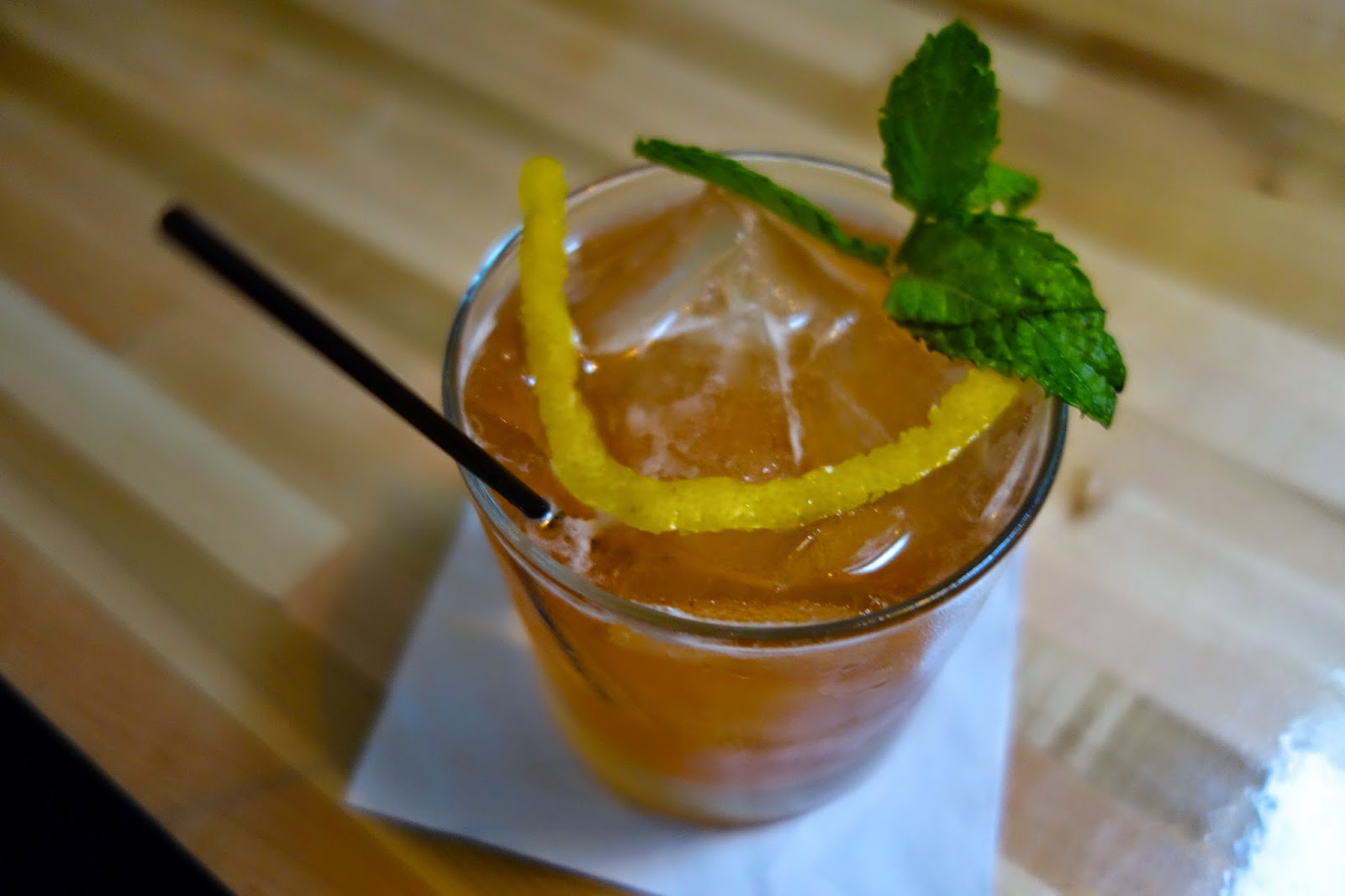 It's worth noting that The Abbey bartenders take their craft very seriously. With each drink they made they sampled it first (don't worry, with a straw) to make sure it tasted exactly as it should.

While sipping our drinks we surveyed the menu. We were excited about several of the menu options, so rather than choose between them, we just decided to order them all.

To start, my dinner date indulged in the cod fritters. 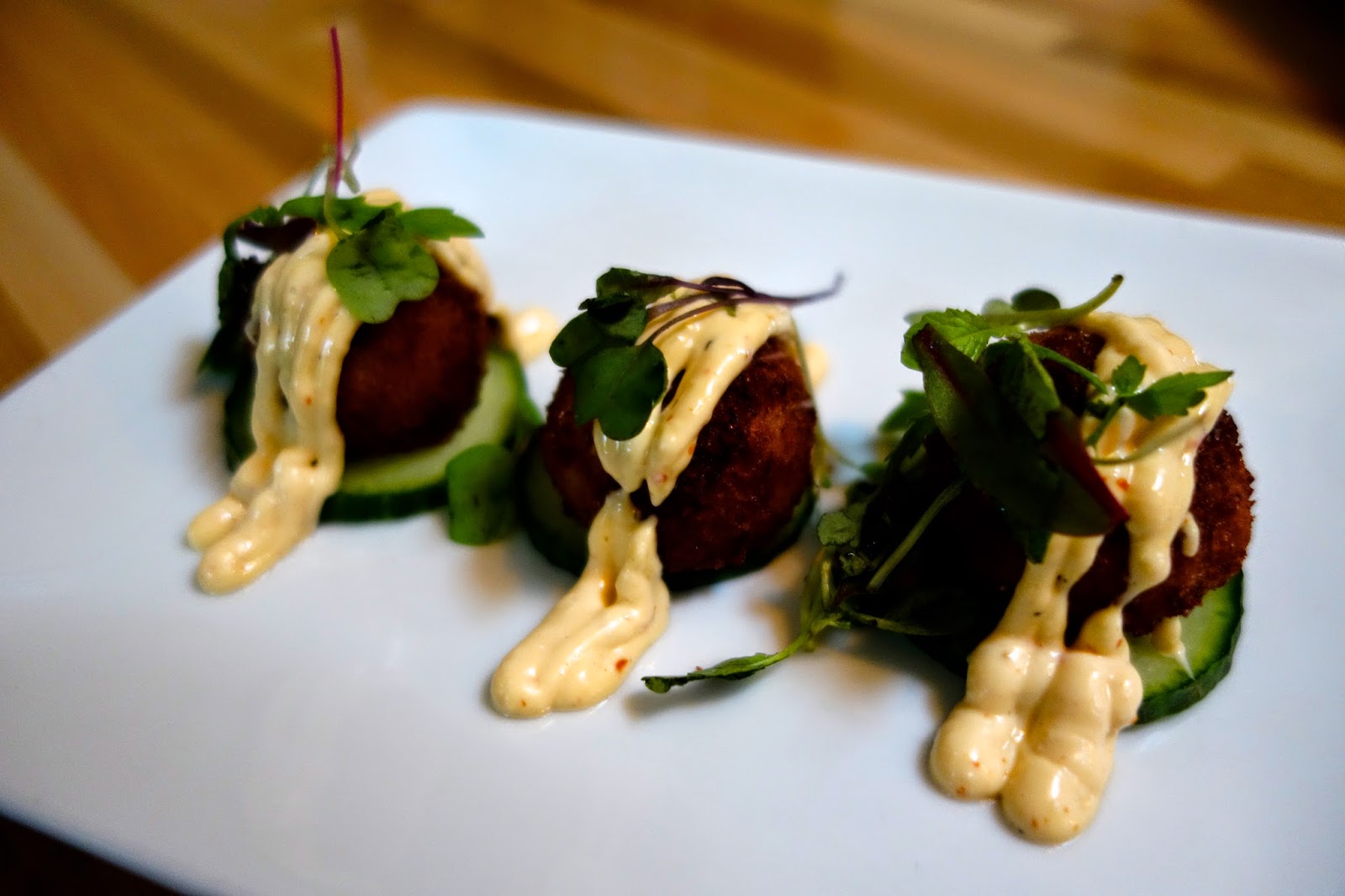 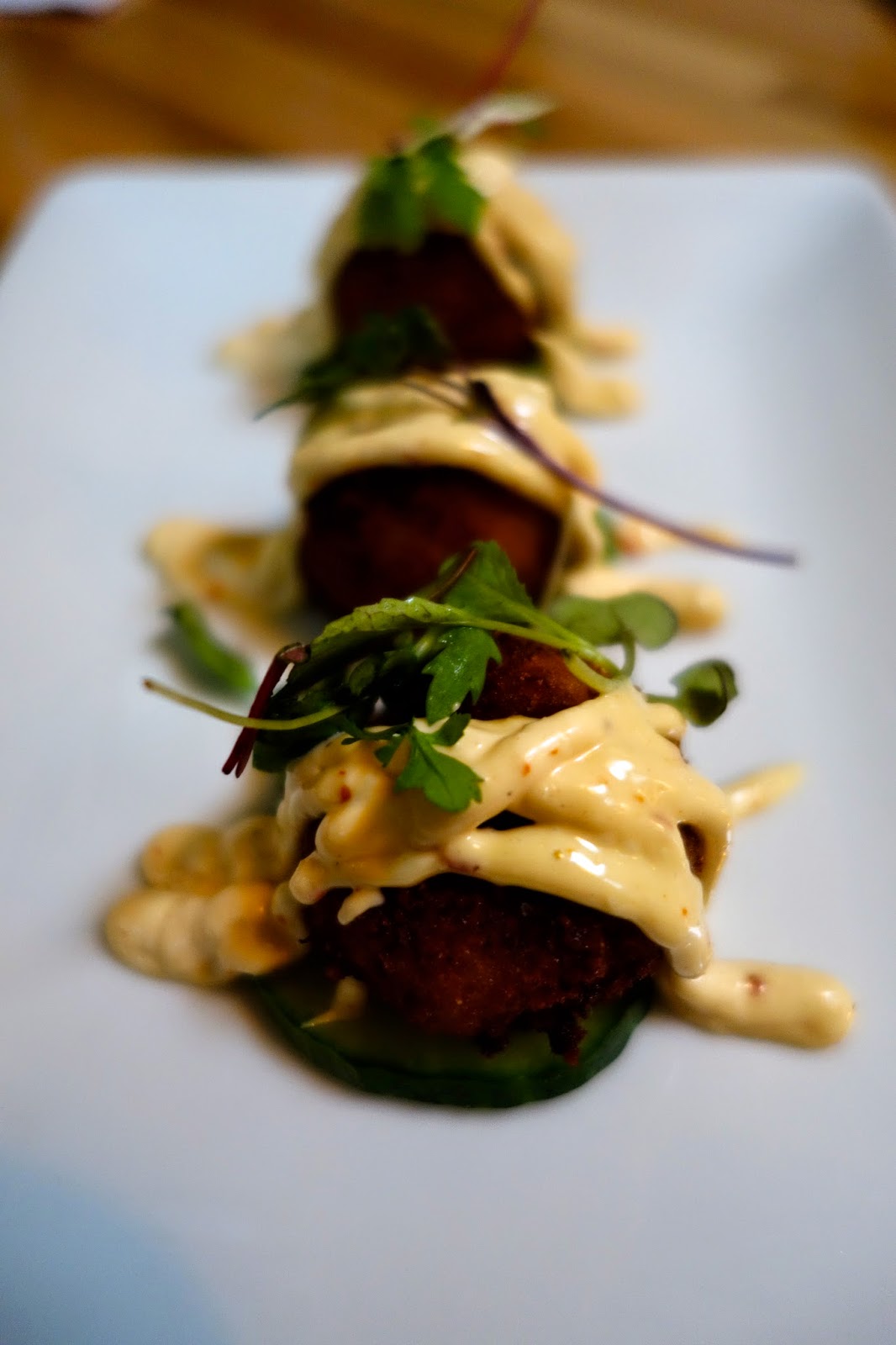 Once all three disappeared she said, "They had a lightly crisped outside, but a moist inside. Each one was a nice bite of fish. I liked the cucumber on the bottom because it added a freshness and a crunch. I only wish the dressing had a stronger flavor."

As she noshed on the cod fritters, I dug into the fried green tomatoes with buffalo aioli. As a vegetarian, I order buffalo sauce at any available opportunity. This sauce was such a bright orange it was practically fluorescent! 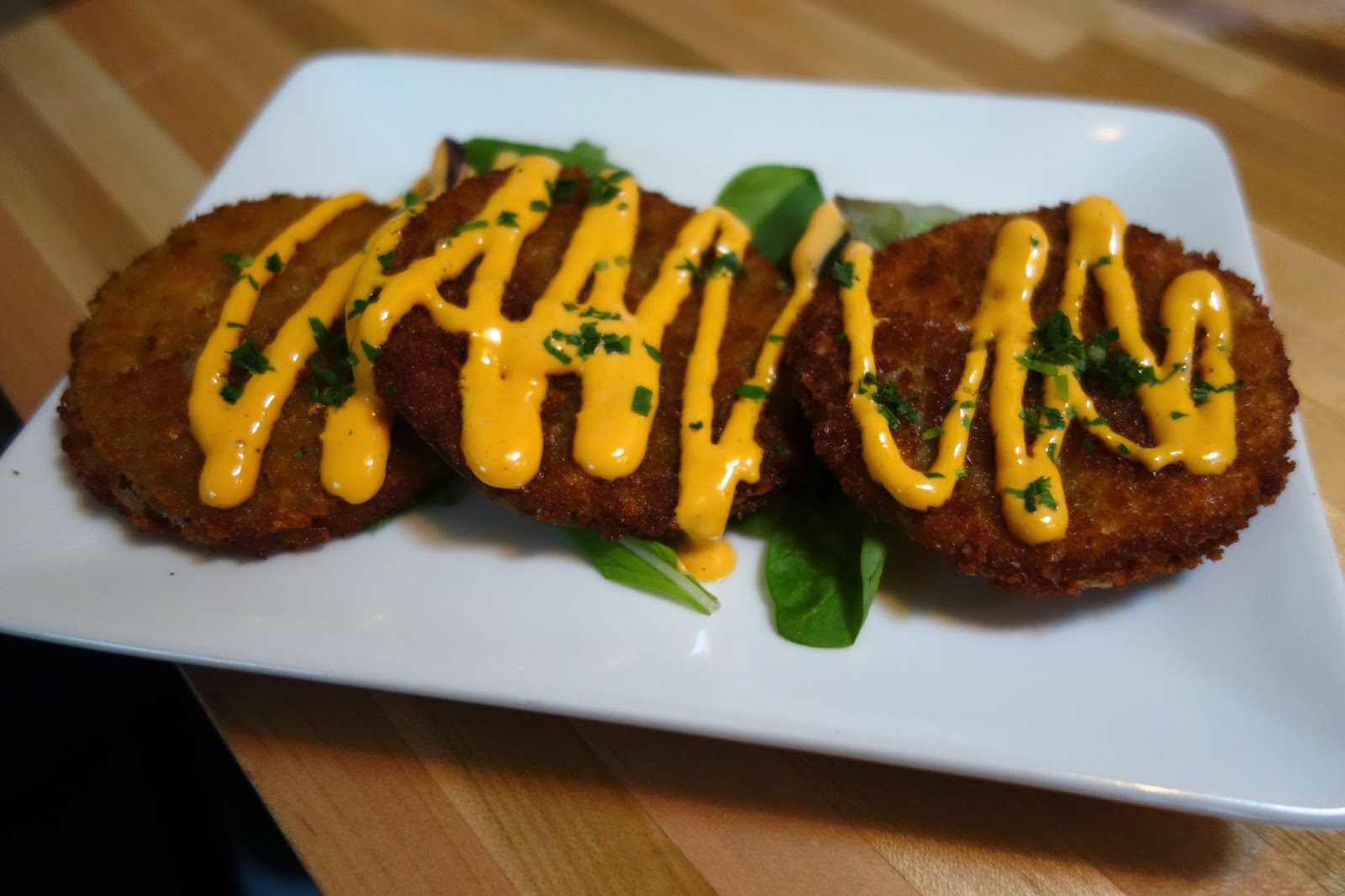 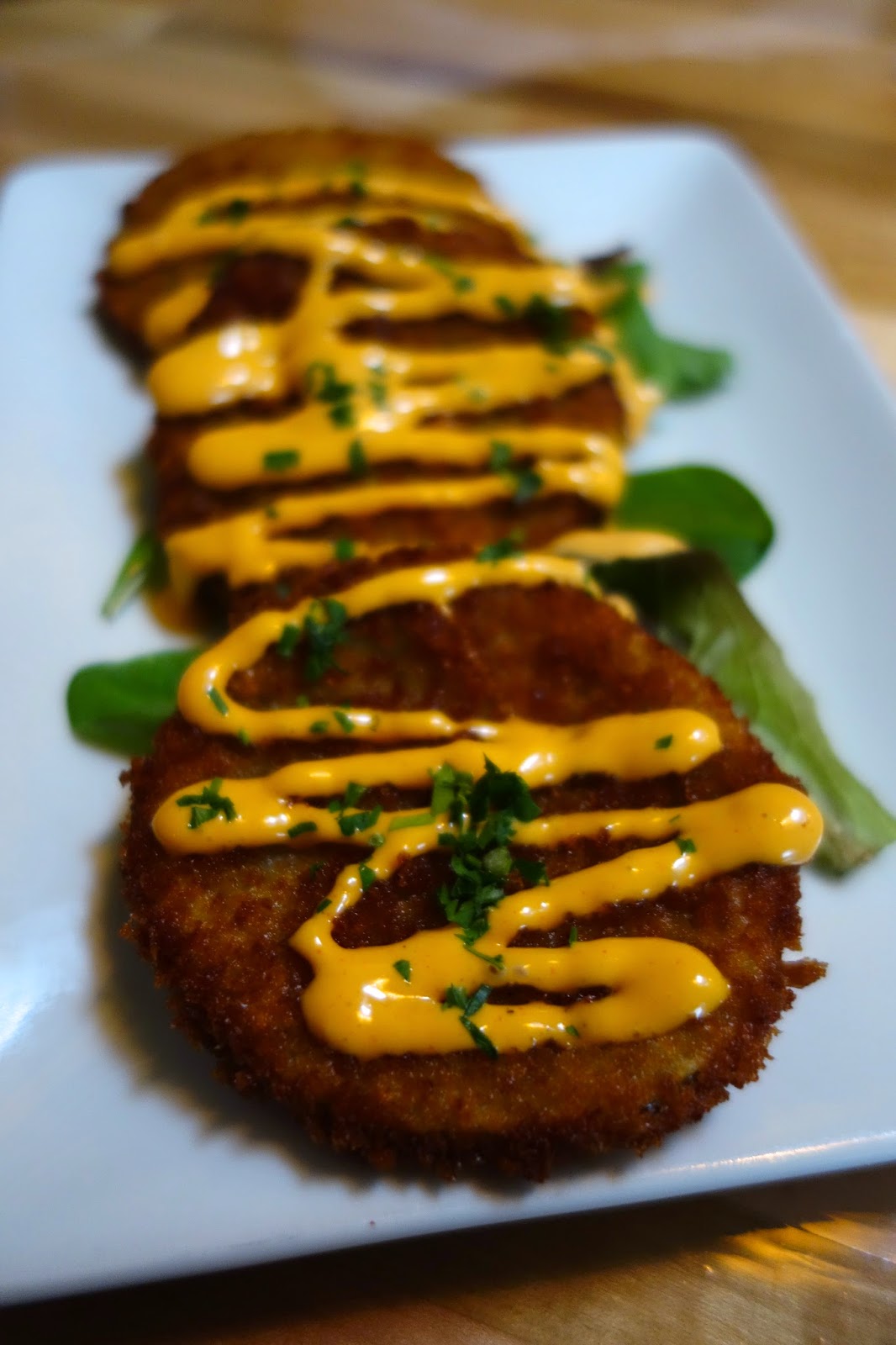 The tomatoes were thinly cut and fried to the perfect level of crispiness. I only wished the buffalo aioli had more kick to it.

To share, we ordered up the pizza special for the night - squash, spinach and red onion. Though from the looks of it the pizza seemed like it could have come for a freezer case at the grocery store, it actually tasted fantastic. It was so cheesy, with strands of cheese traveling with each slice as we tried to move them onto our plates. 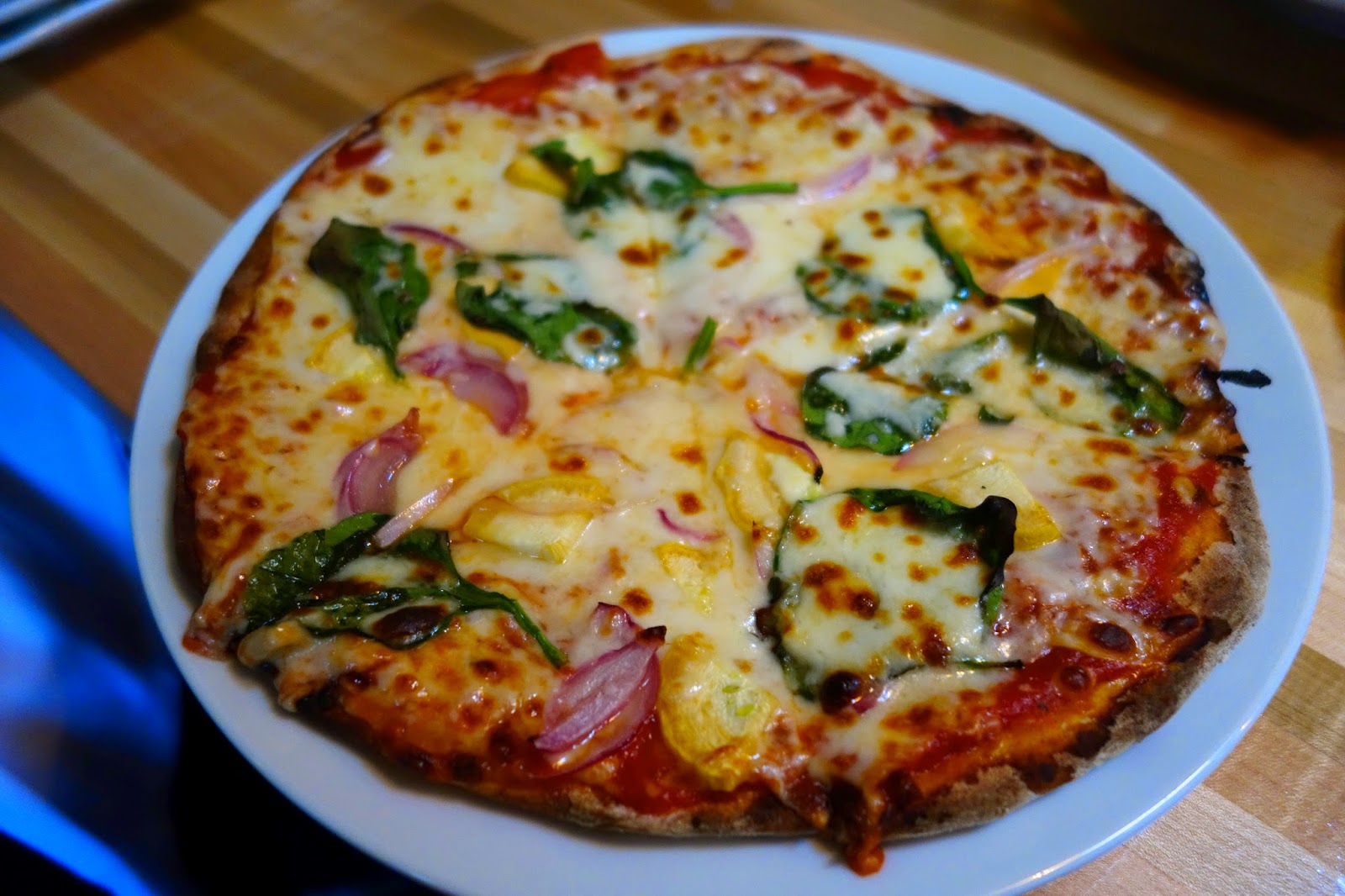 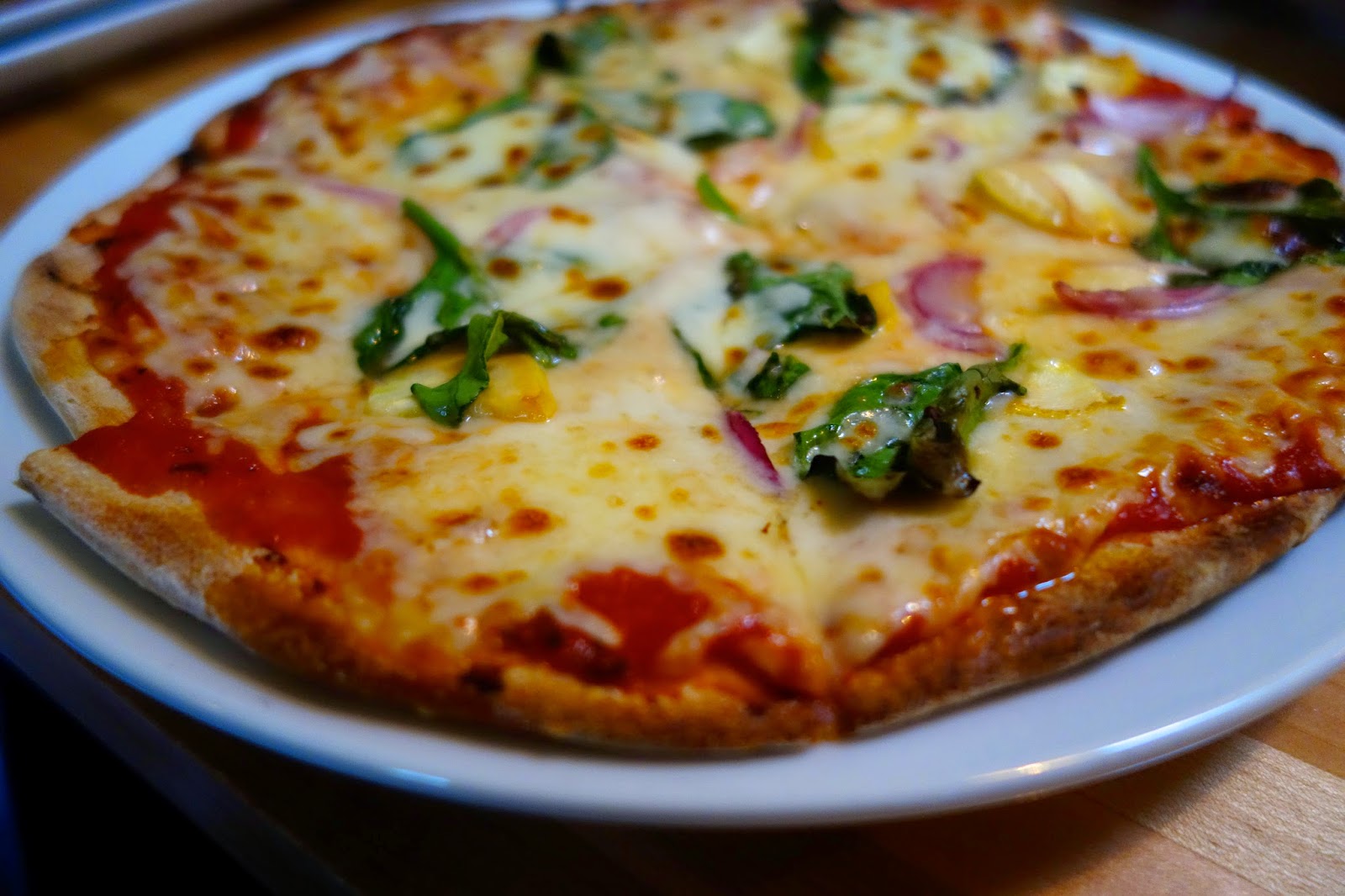 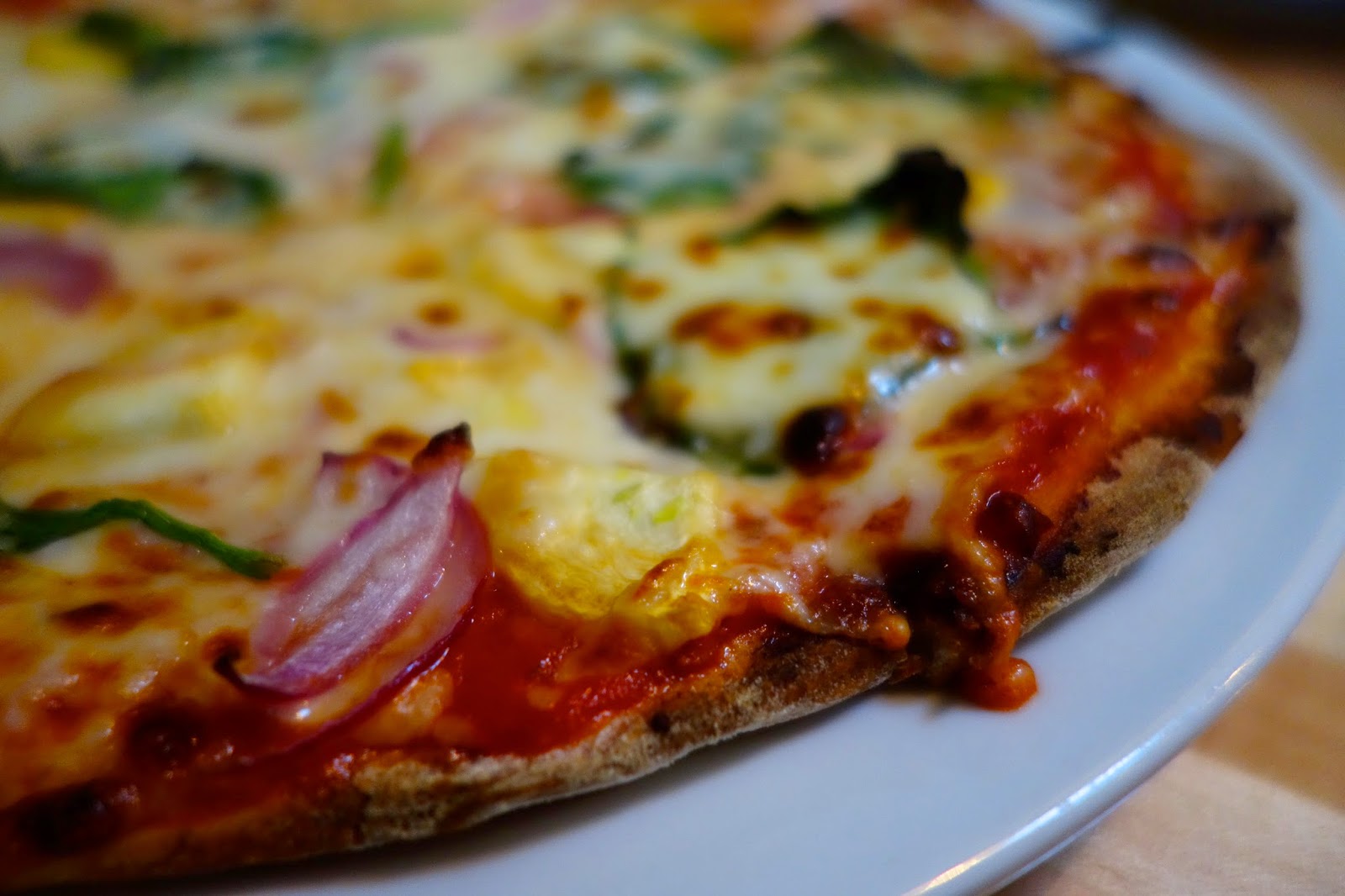 The tomato sauce was excellent, the veggies tasted fresh and the crust had the ideal amount of crunch.

Since we were clearly in a gluttonous mood (blame it on Friday euphoria) we also got a side of the truffle French fries. I took one bite and proclaimed to my friend, "Who needs a boyfriend when you can have truffle fries?" 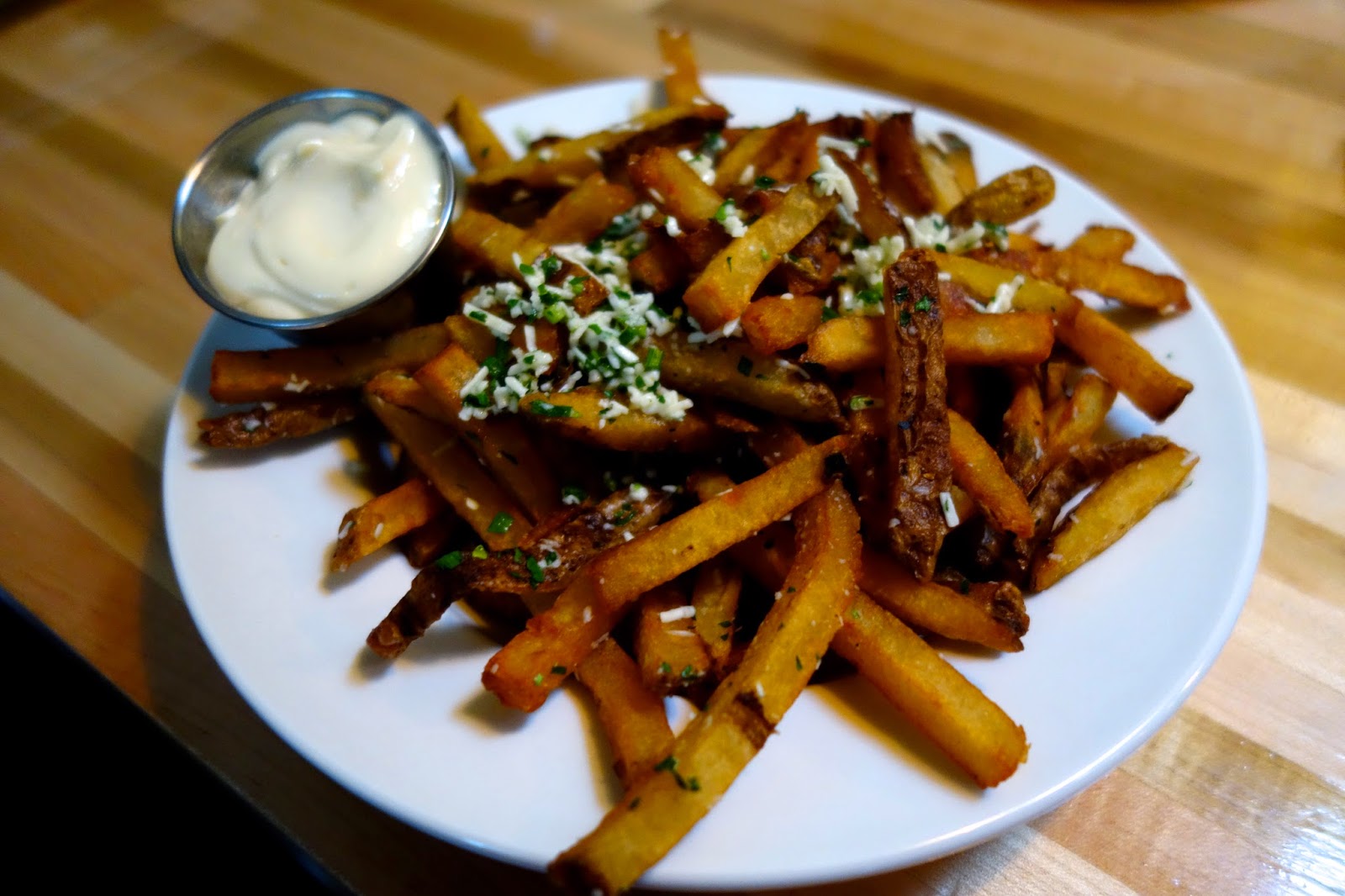 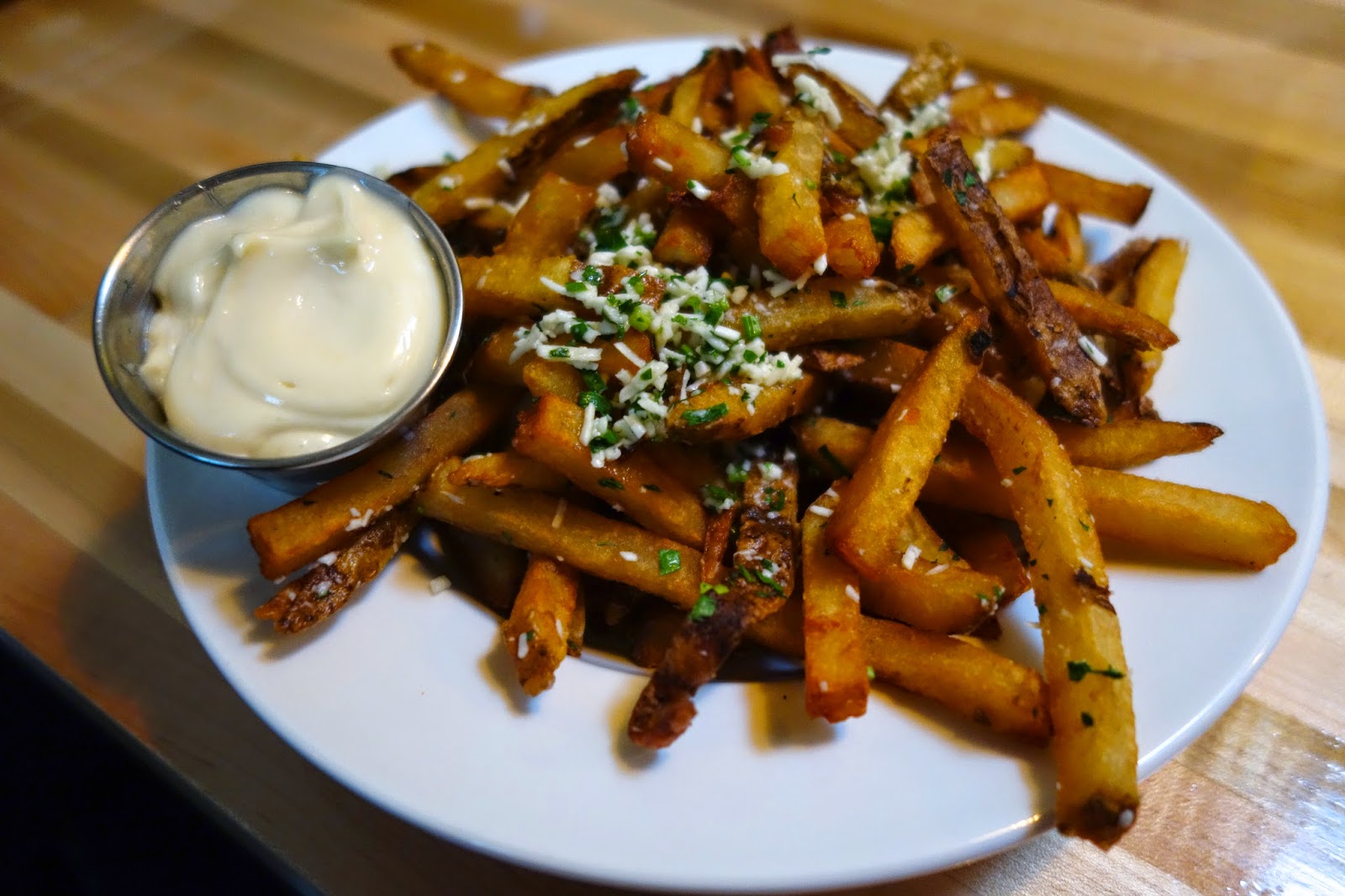 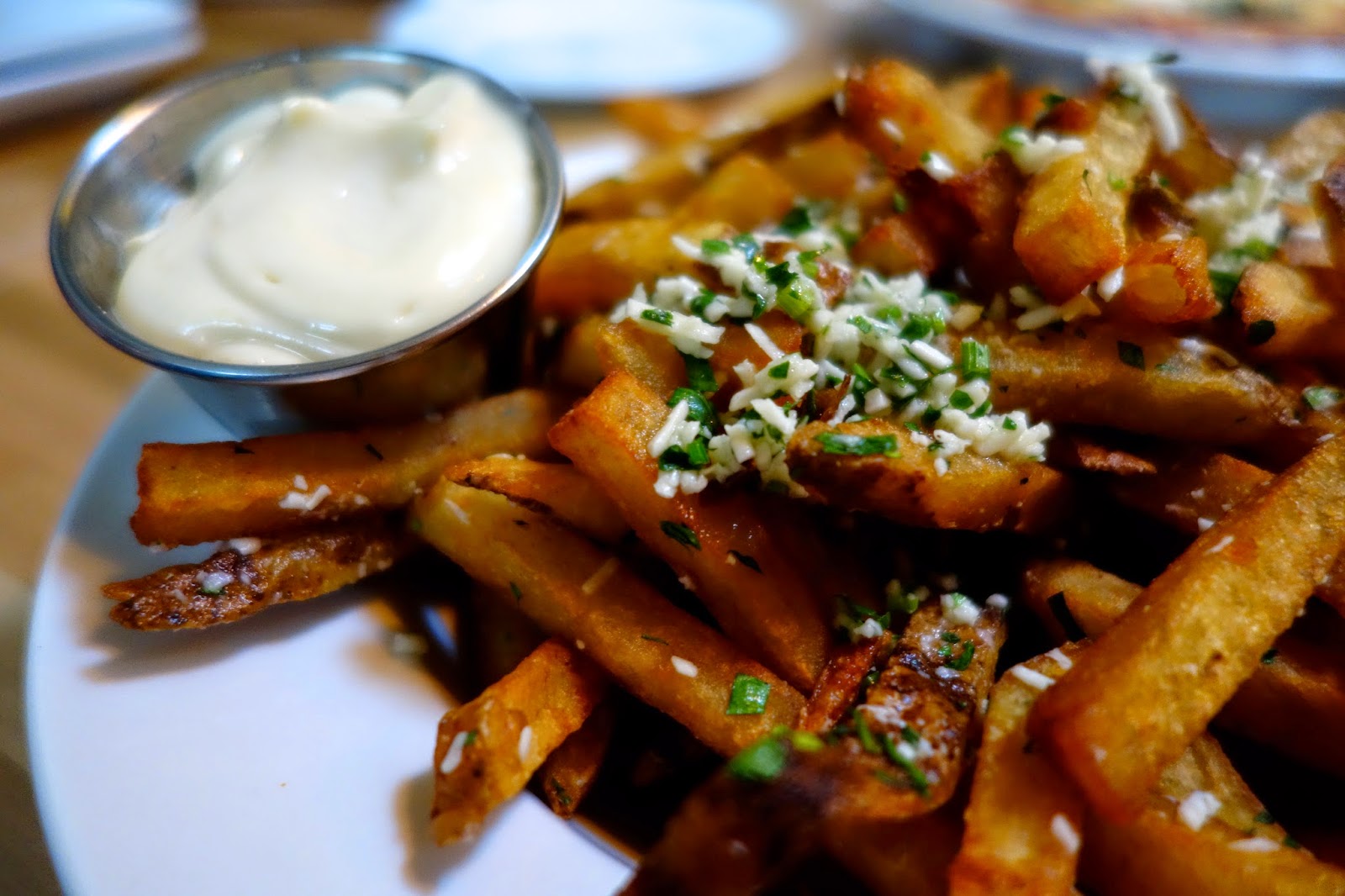 Everything about these fries was spot on - the cut of the potatoes, the golden brown color and the roasted garlic mayo. It also comes in a very generous portion. More than enough for two people.

To balance out our over the top menu choices, we also requested a side of the Brussels sprouts. After the first bite I was already tasting an awesome char so I asked the bartender how they prepare the sprouts. I assumed they were grilled, but he told us they actually shred them, toss them in a pan with EVOO and just sauté them until the start to brown. He had me convinced the recipe was easy enough for me to try at home. Now that's a triumph. 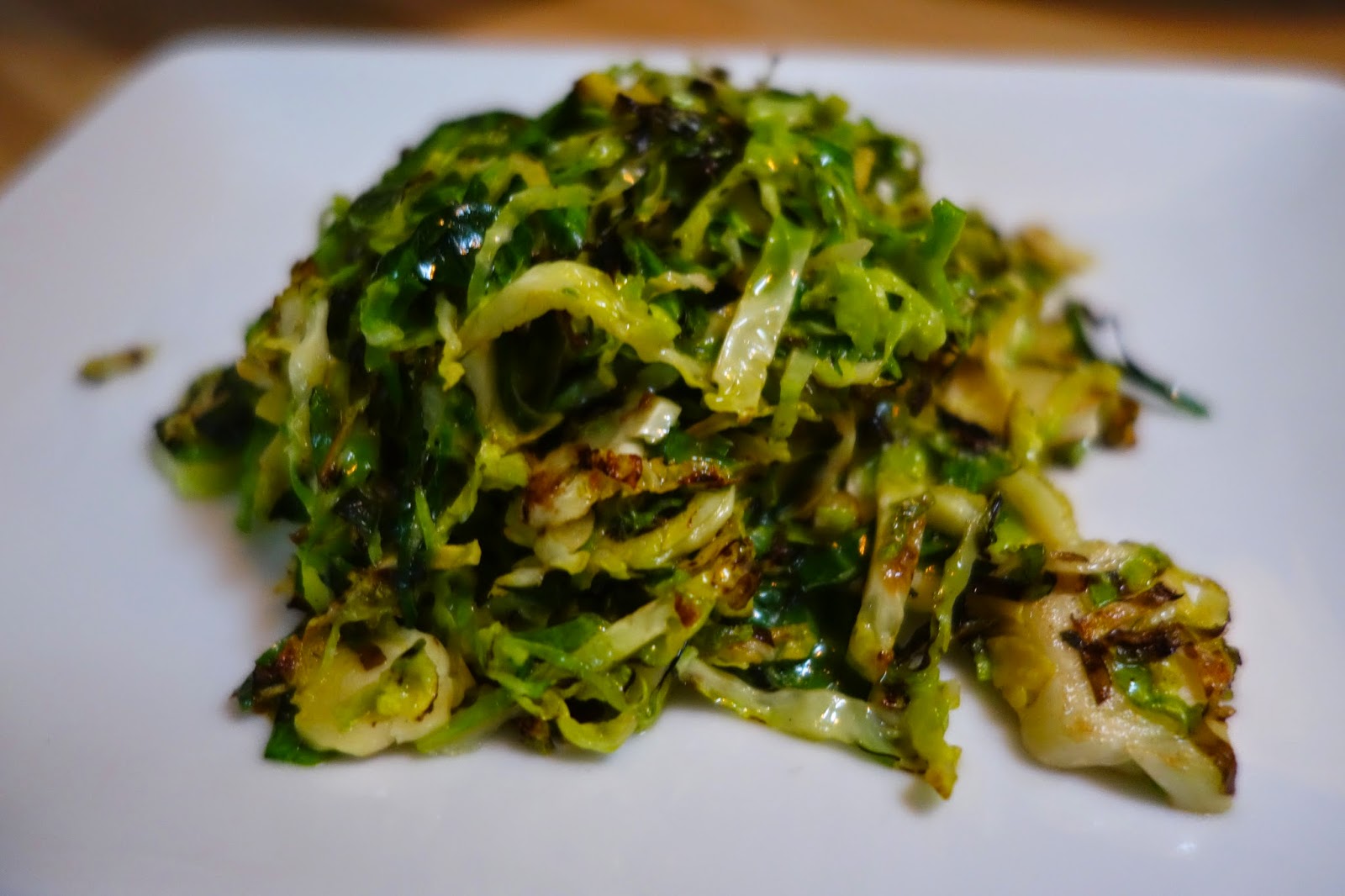 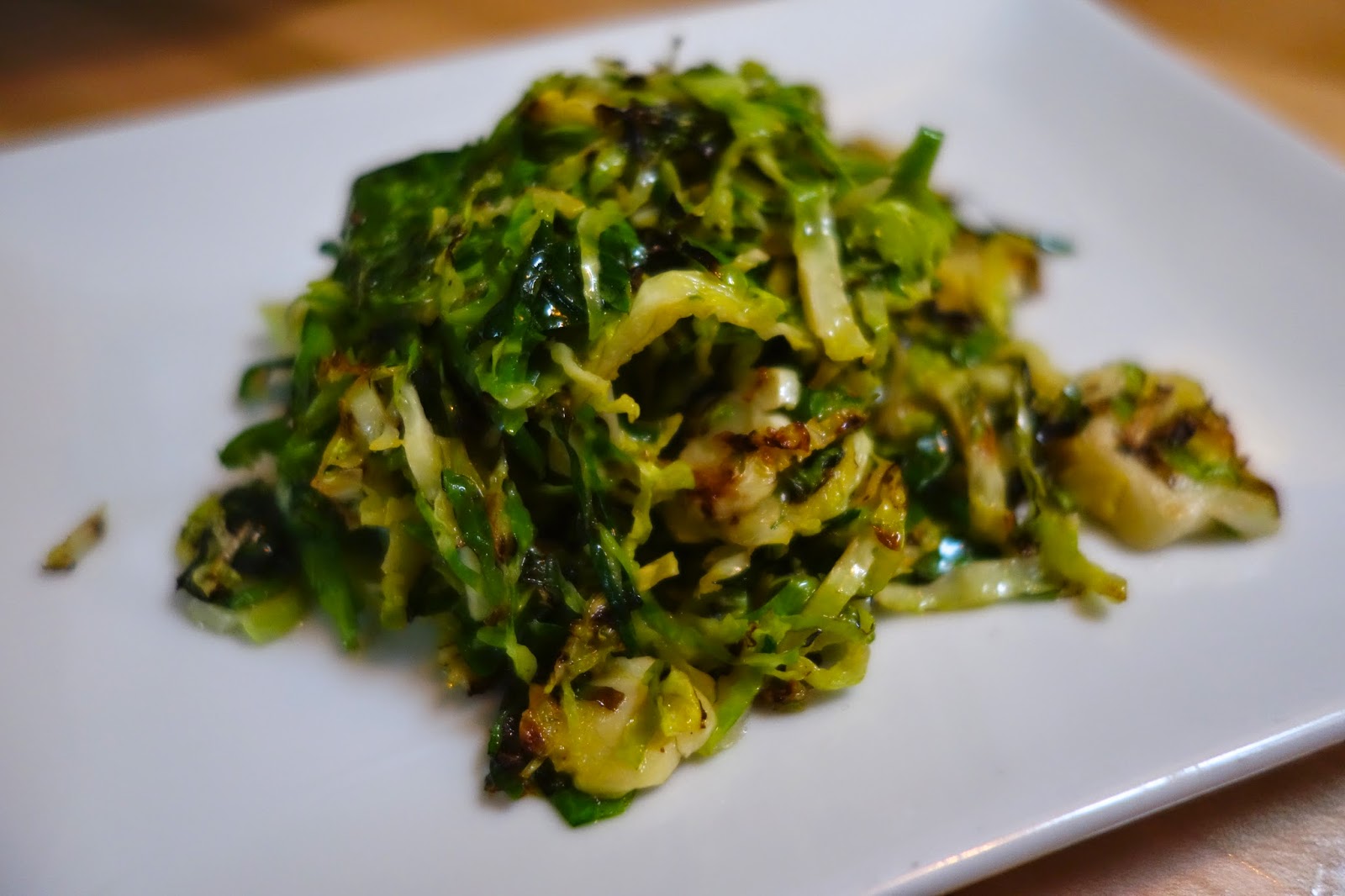 After our dinner at The Abbey I was so full and happy I didn't even want dessert. If that isn't a sign of an outstanding meal, I don't know what is.

I definitely had my reservations about The Abbey after my nightmare experience at their Brookline location, but the folks behind these two spots have definitely turned over a new leaf with this Cambridge location. The restaurant space is beautiful, the staff is friendly and knowledgeable, the drink menu is extensive and most importantly, the food is killer.

Have you been to either of The Abbey locations?

Loved this meal so, so much.

I should definitely make plans to check out The Abbey in Cambridge soon! The fries look fantastic.

you photos are amazing!!!!!

The stretch of Mass Ave between Harvard Square and Porter Square in Cambridge has some of the best restaurants in greater Boston - The Abbey for top notch bar food, Bagelsaurus for a killer breakfast, Giulia for authentic Italian and Temple Bar for seasonally-inspired fare.

Several months ago I stumbled upon the Bagelsaurus Instagram account (@Bagelsaurus13) and was immediately intrigued. Each day they post the most mouth watering photos of fresh bagels and bagel sandwiches packed to the gills with goodies. 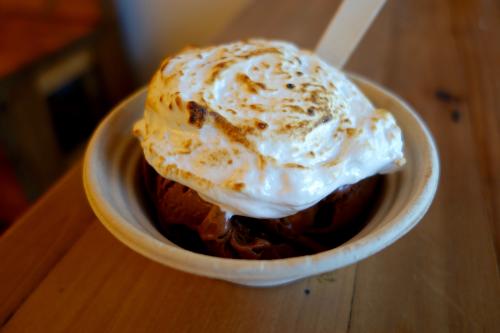