It's well documented that I am a Shake Shack devotee. Back in January 2012, I had the pleasure of hearing Shake Shack founder Danny Meyer speak at a conference and I was totally inspired by his vision.

During that presentation he talked about how the Shack team picks a new location. He described to us that the spot is all about the "Shackness." He said, "When I go scout a new place, I sit down, imagining myself as the diner with their burger, fries and shake and I ask myself - does location make me feel relaxed? When I look around am I taking in scenery that feels amazing, inspiring and like classic New York? Does this location help me escape from my life for just five minutes and have a genuine, uplifting experience? That's Shackness."

I just love that!

I have to be honest, I didn't feel the Chestnut Hill location had that "Shackness" factor that Danny Meyer talked about as being essential to the brand's vision. That being said, when I heard a second location was opening in our great state and it would be in Harvard Square, I thought, "That's more like it!"

This winter, Shake Shack arrived in Harvard Square in Cambridge in the space next to the Red House and across the alley from Grendel's Den.

I made plans to dine there after work with a friend and we practically skipped through the park on JFK Street as we made our way to the front door. The Shake Shack is all floor-to-ceiling windows, so the restaurant literally glows from the inside out. 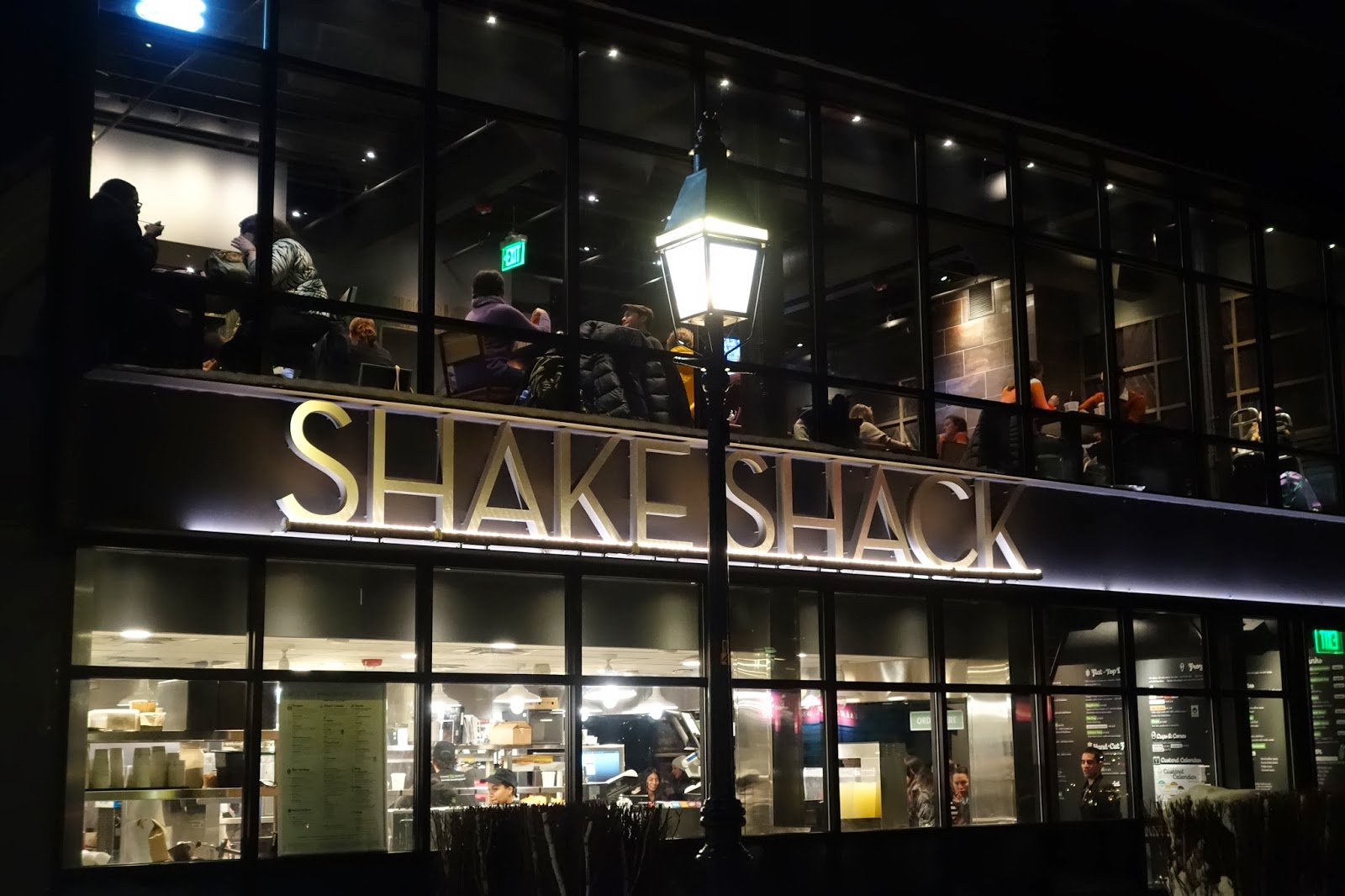 When you walk in the front door, the menu covers the entire right wall of the space.

Every Shake Shack offers concretes (like milkshakes, but made with frozen custard) and each location has flavors customized to their location. Here at the new Harvard Square location there are three choices: MInT Chocolate (a nod to MIT), Crimson Red Velvet (for the Harvard crew) and Lobstah Shell (which they also sell in Chestnut Hill). 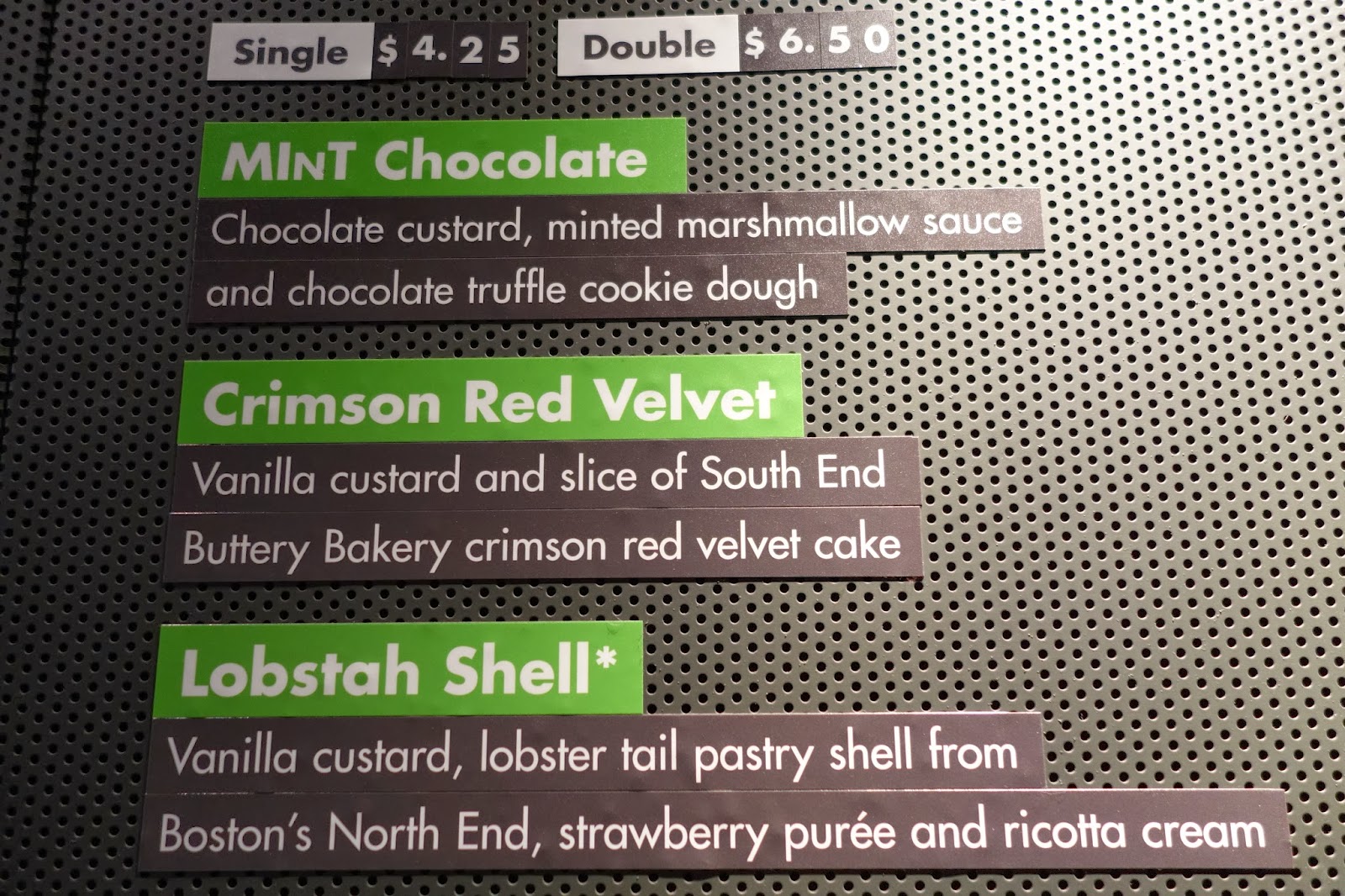 I was expecting a line out the door (as is customary with Shake Shack), but there were only four people in front of us! When we got to the counter there was a special milkshake in honor of the Hasty Pudding, which hosted Neil Patrick Harris the night before. The Hasty Pudding milkshake was vanilla frozen custard, bananas and salted caramel sauce. 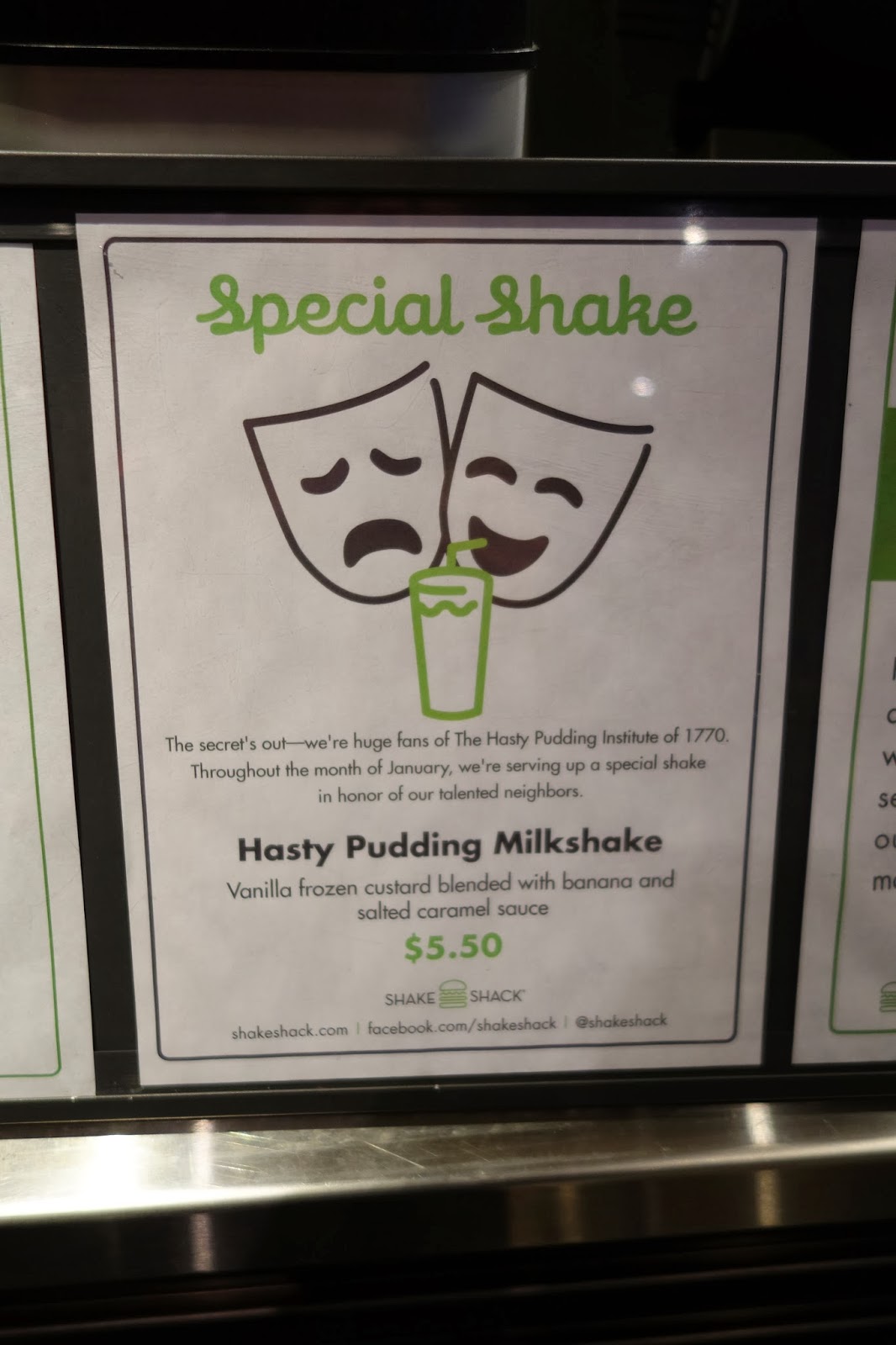 We placed our order and the cashier handed us a buzzer. We then walked up to the second floor to try and find a table. The place was totally packed! We had to circle like vultures to score a seat. 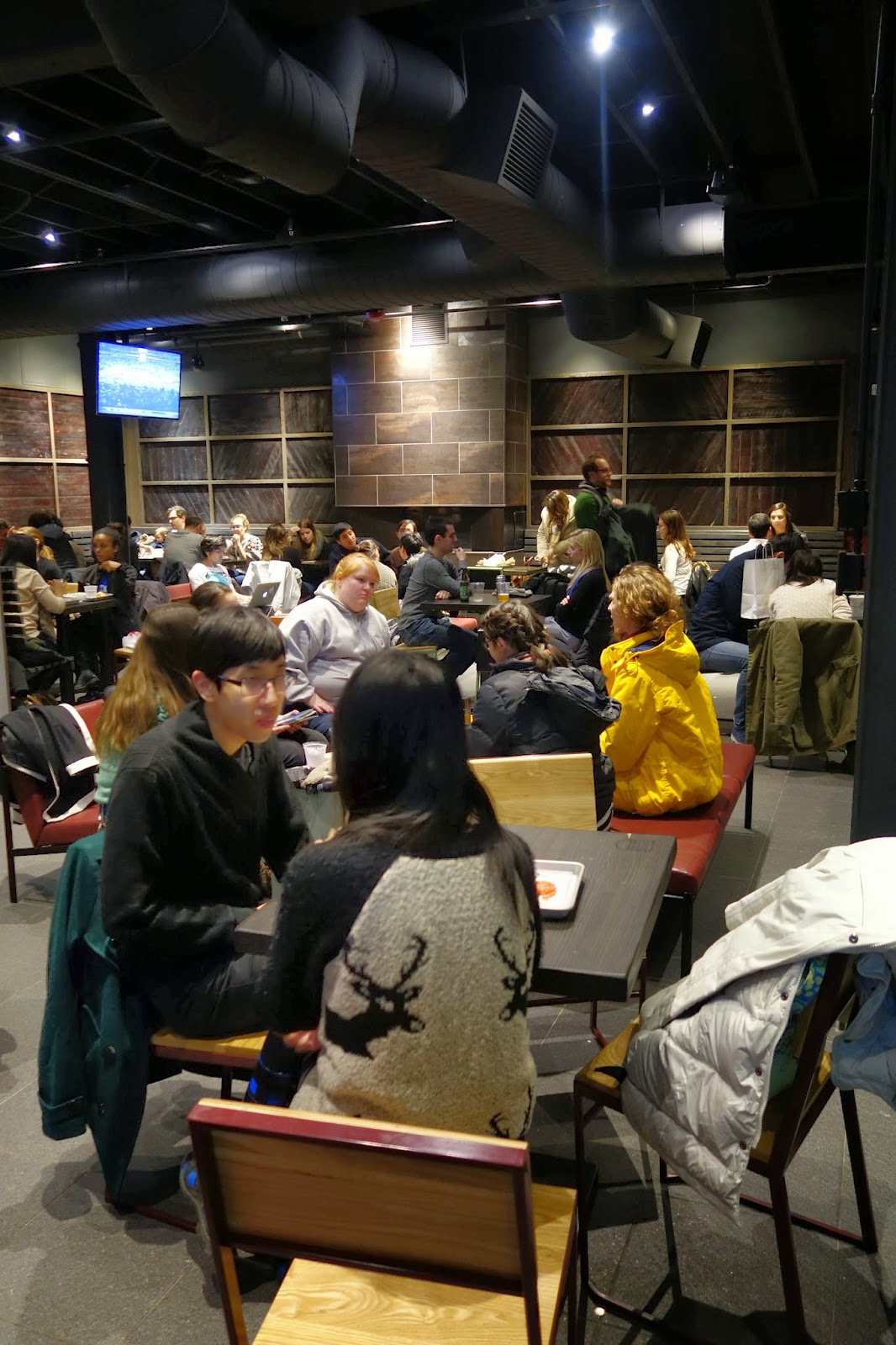 We finally stole a table from a couple barely done with their meal and wound up in a killer spot. We were right in the window. 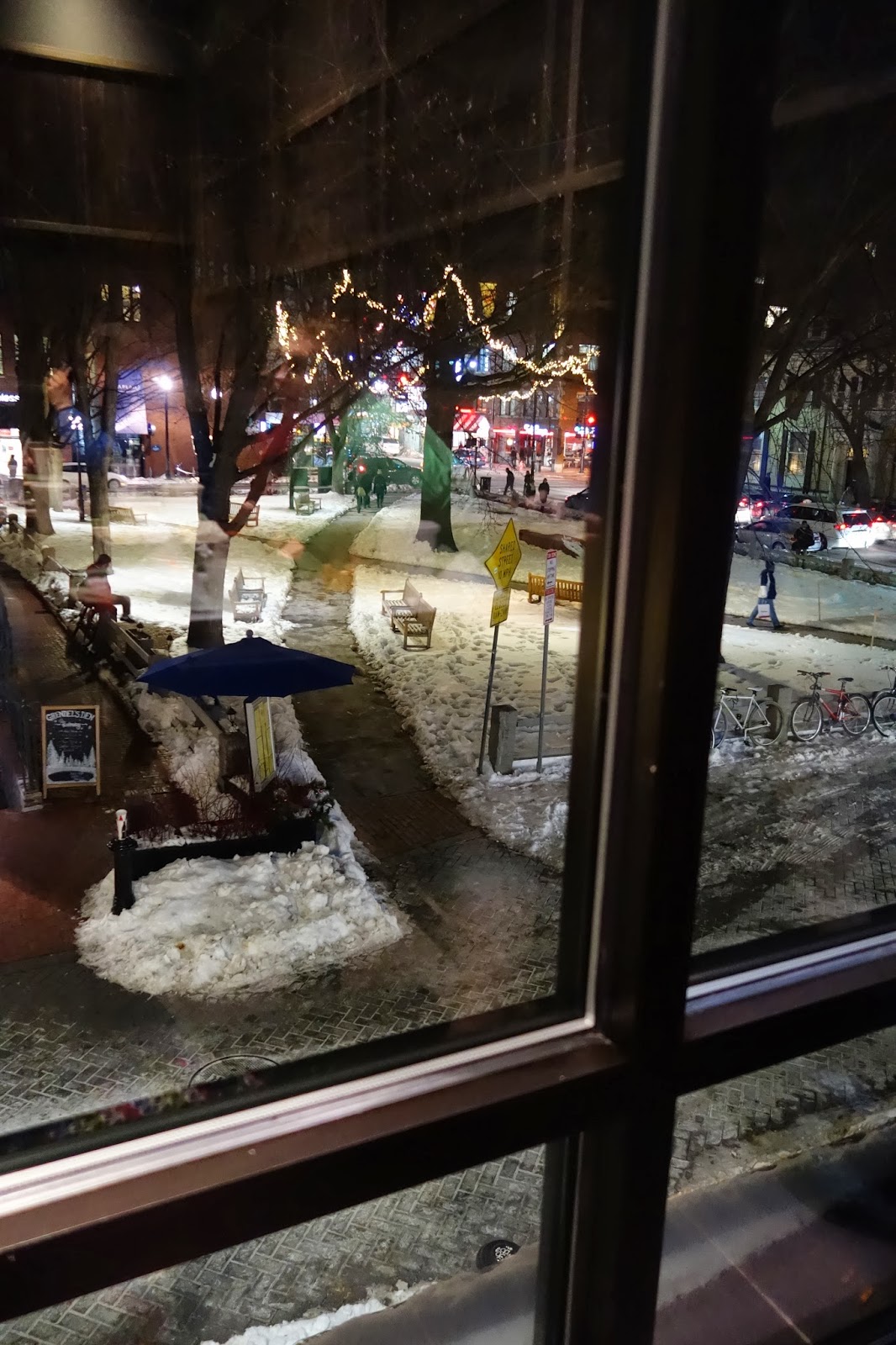 From our seats we could see all of the park and almost all the way down JFK Street to the T stop. Now that's what I call "Shackness." 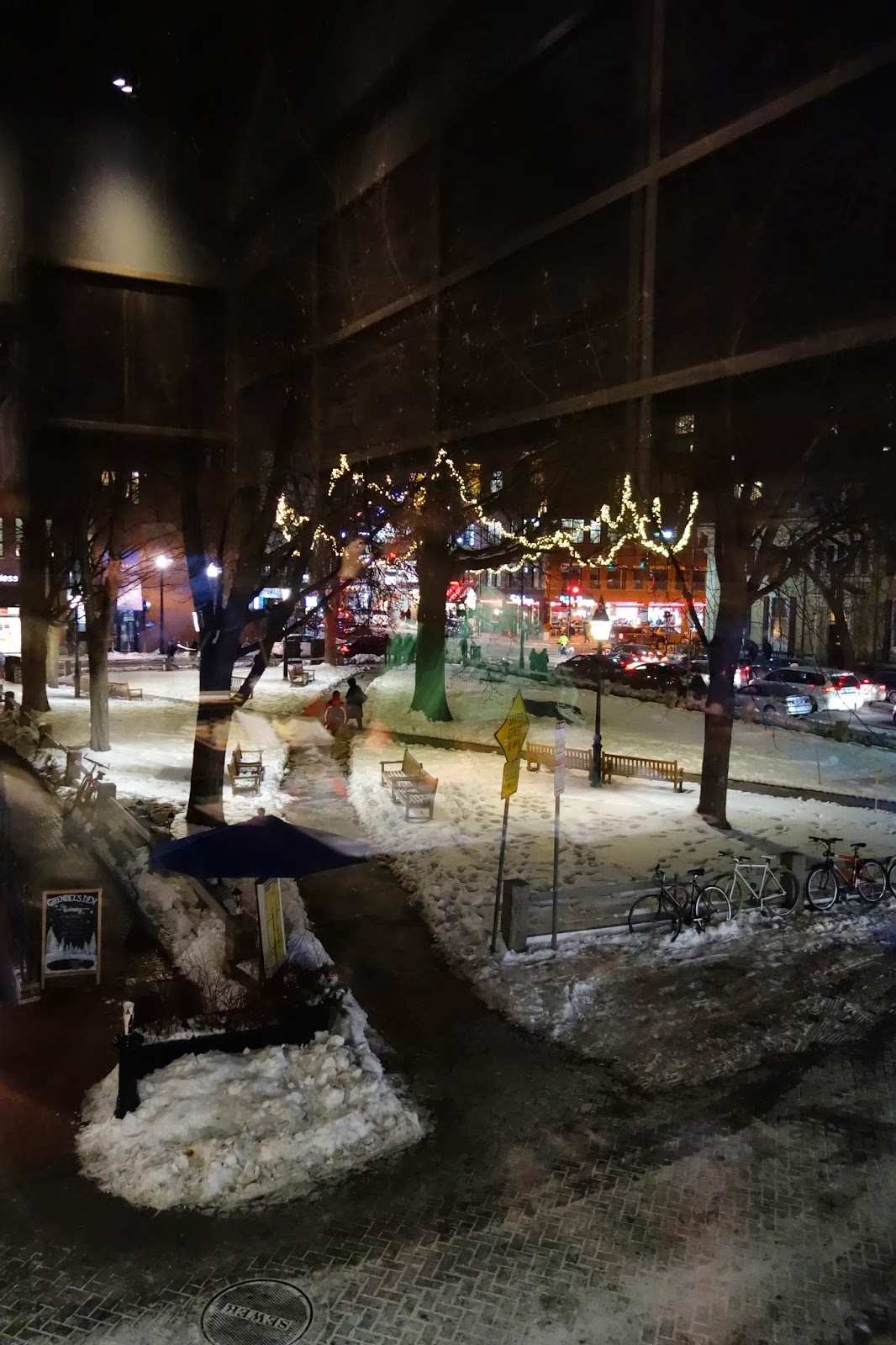 After less than five minutes, our buzzer went off and we carried our trays back up to our table. 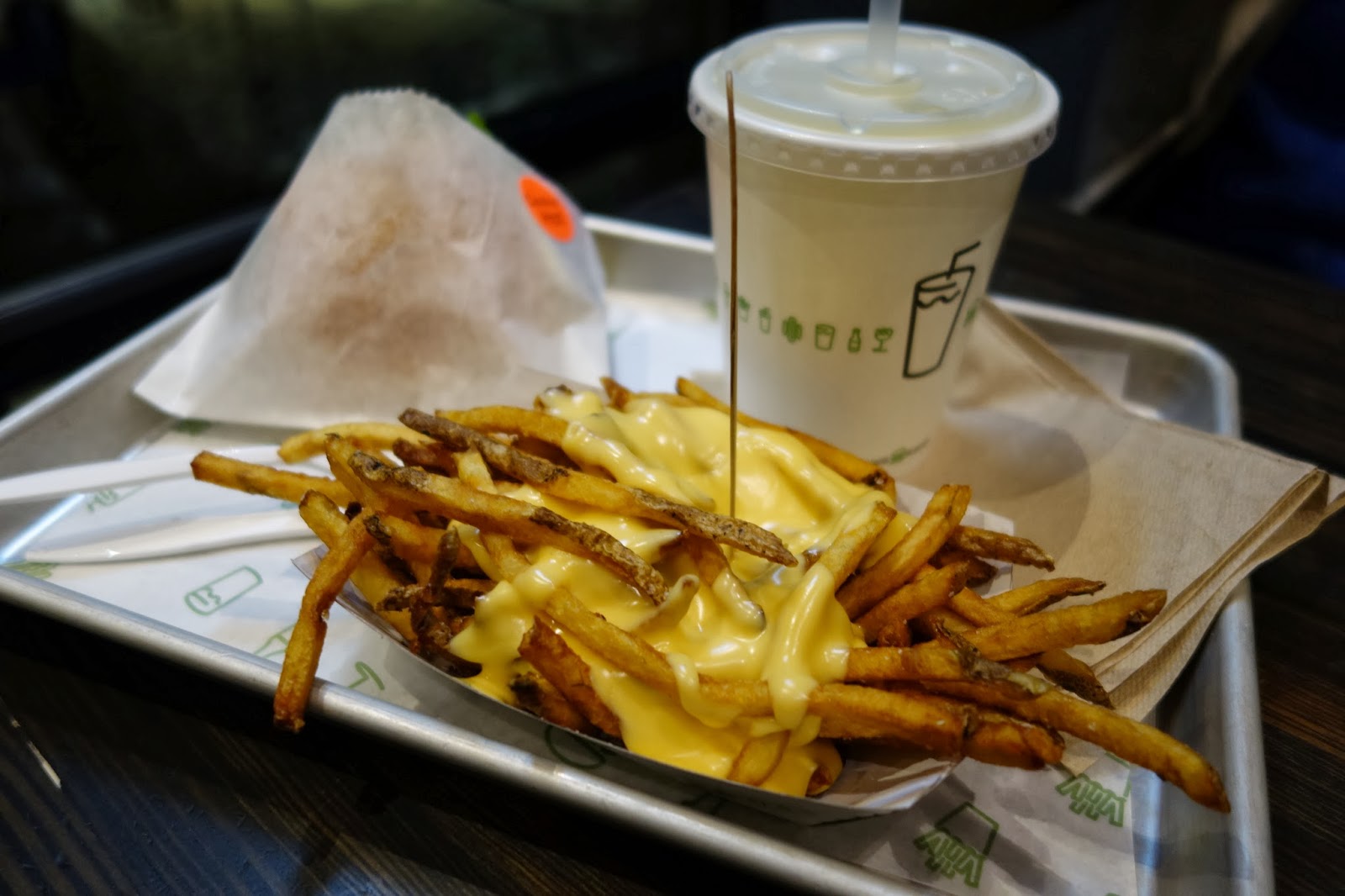 We decided to split cheese fries (always a good choice). What I noticed immediately was that Shake Shack's signature crinkle cut fries had been replaced by thin, crisp, shoestring fries. I have to say, I prefer this new style. 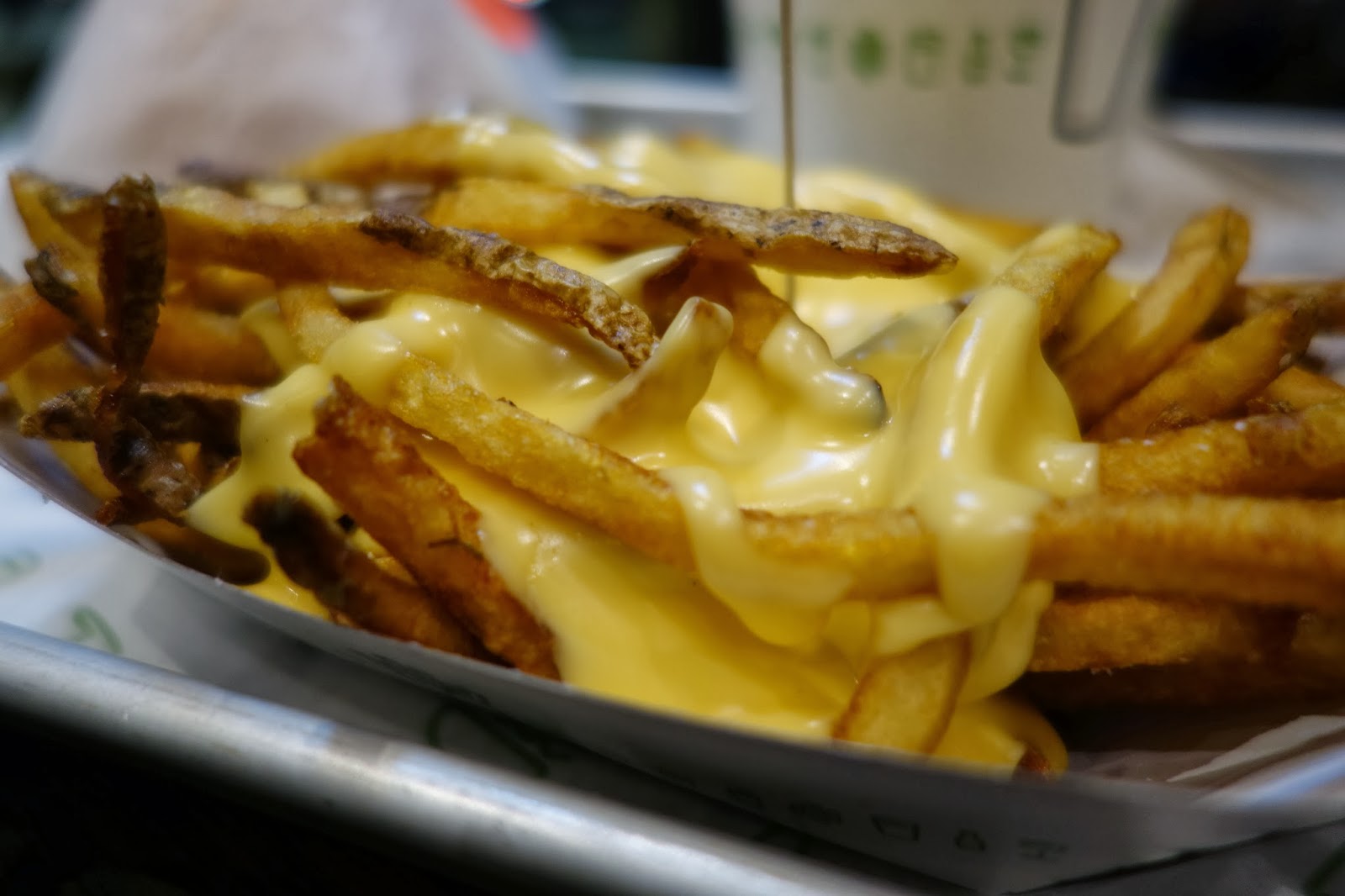 This dish was perfection. The topping is the ultimate junk food cheese, the kind comes on nachos at stadiums, and the fries beneath were excellent. When you're standing in line trying to decide if you should indulge and get these, the answer is, "Yes."

My dinner date ordered the key lime lemonade to accompany her meal. She commented, "It's very tart. It tastes mostly of lime. If you added tequila to this, it would make a great margarita." 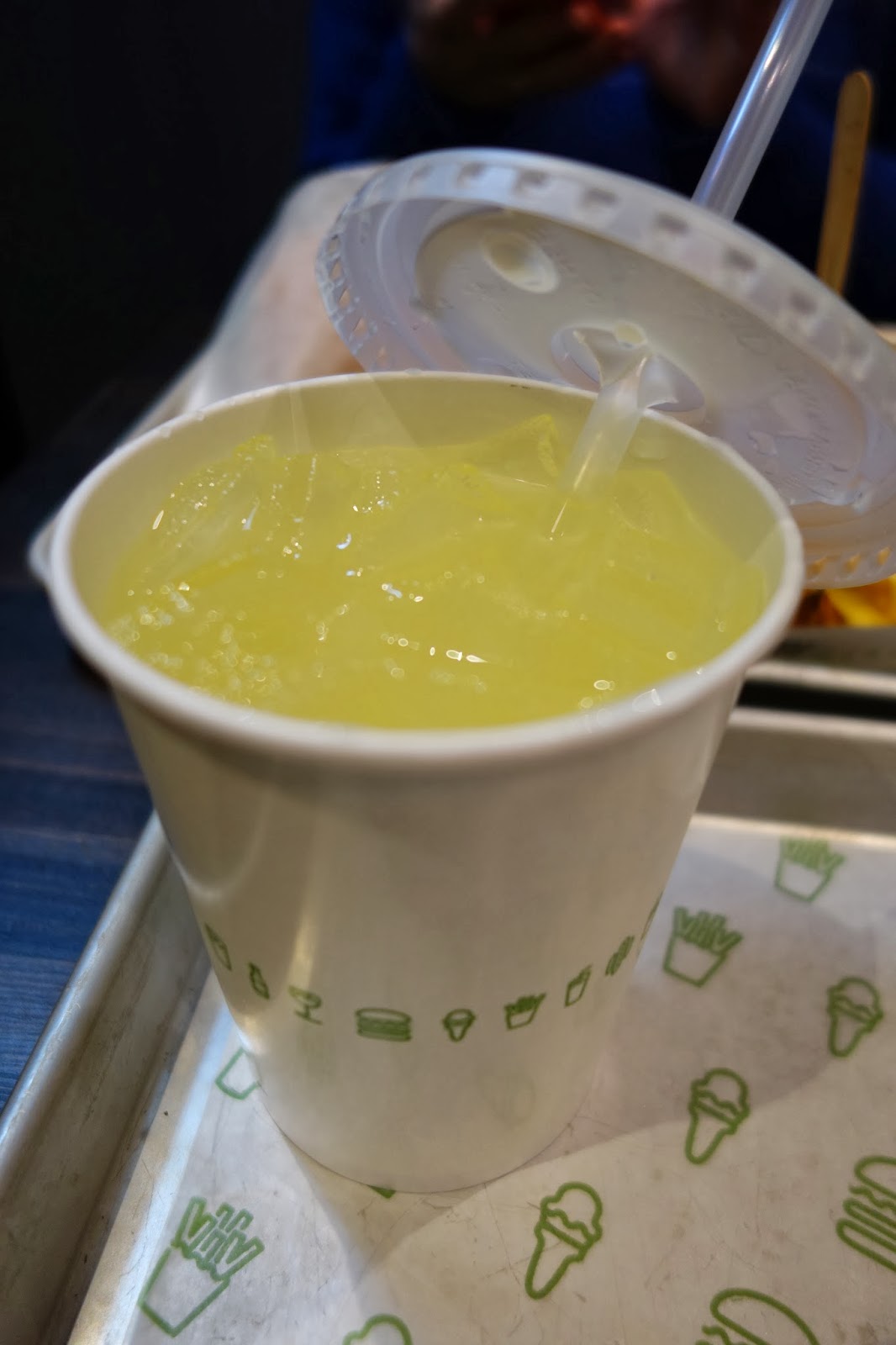 For our main meal, we both ordered the Shroom burger. The Shroom is the vegetarian choice at all Shake Shacks and it's unreal.

For the first time in any of my Shake Shack visits, my burger was wrapped and topped with a neon sticker cautioning, "Hot!" 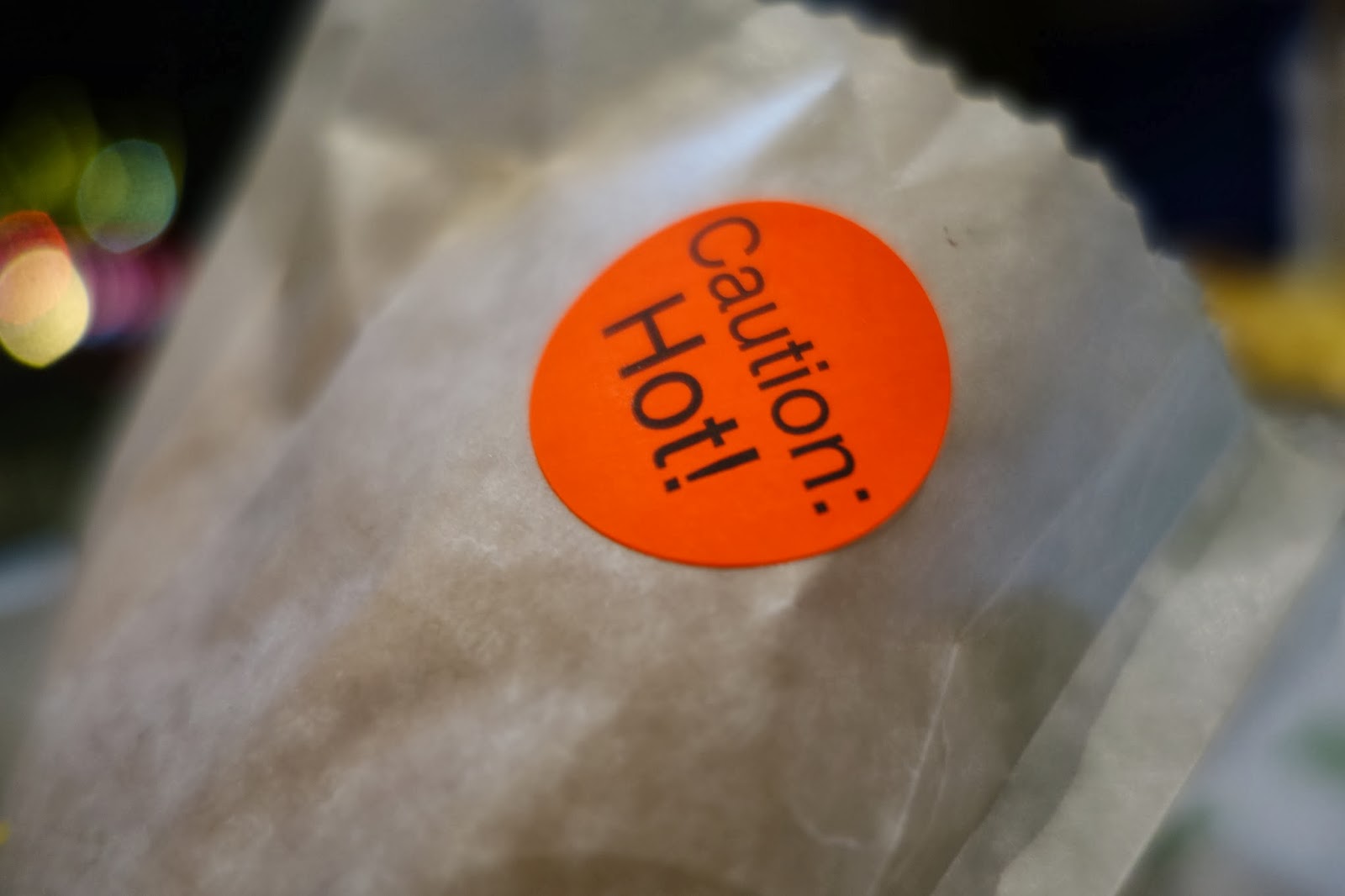 Inside that white paper sleeve was the glorious Shroom burger. It's a fluffy bun piled with a portabello mushroom (which is stuffed with cheese), lettuce, tomato and Shack sauce. 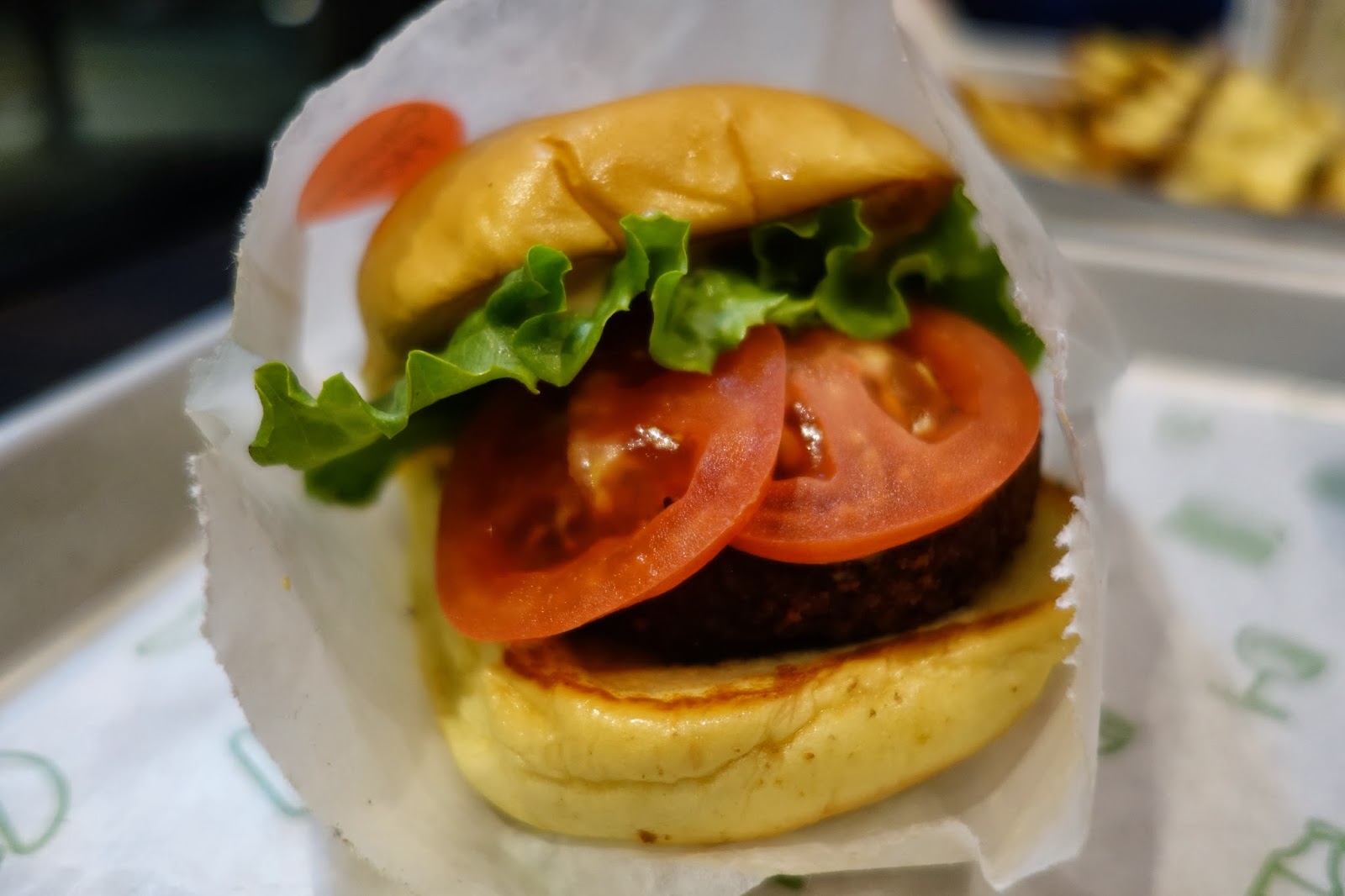 One bite in and the cheese is already oozing out from the mushroom. This is vegetarian heaven. 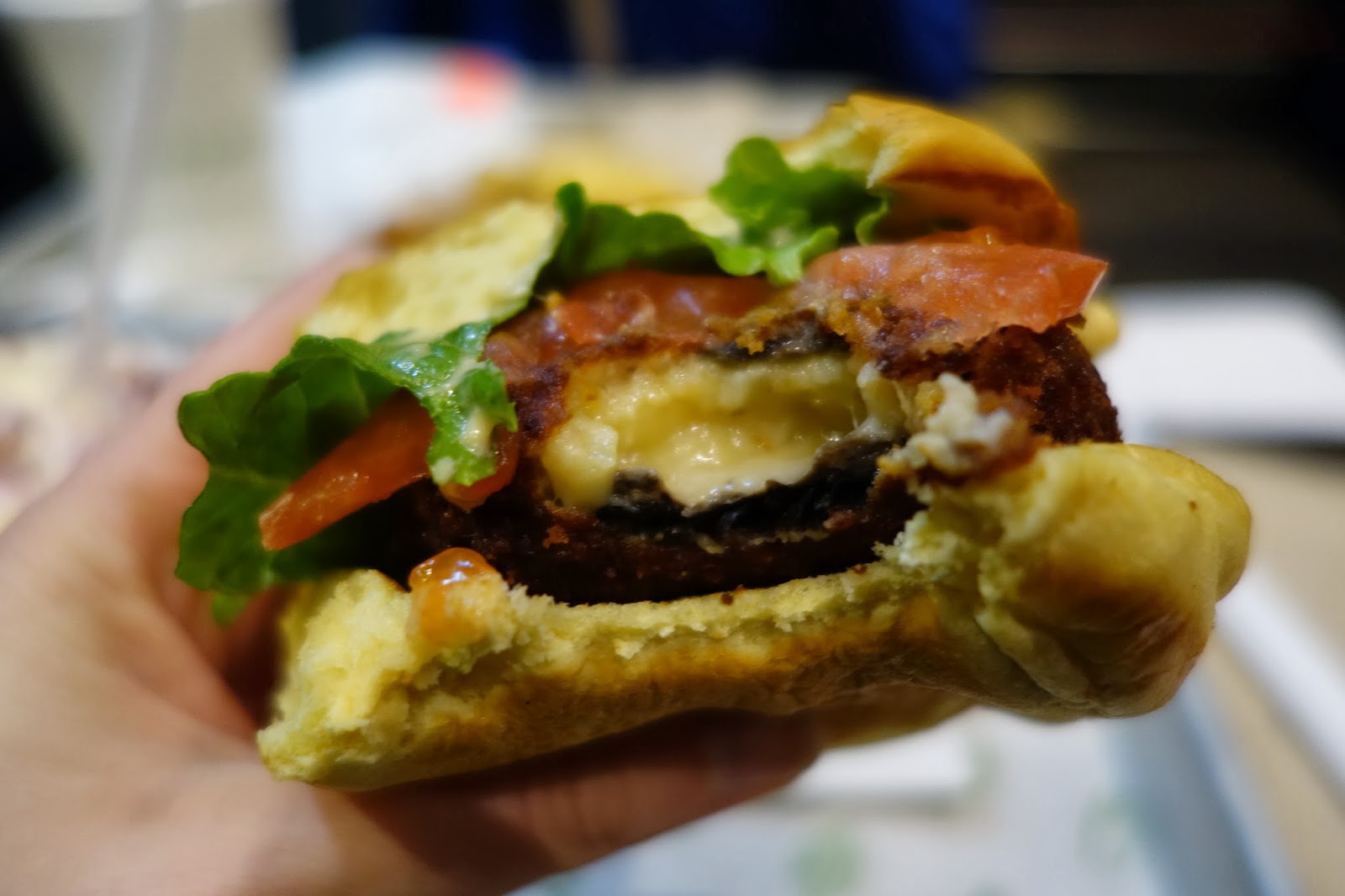 My friend commented that she thought this Shroom burger was much smaller than the one she was served in New York City. I didn't find that at all. I think she just wanted more! 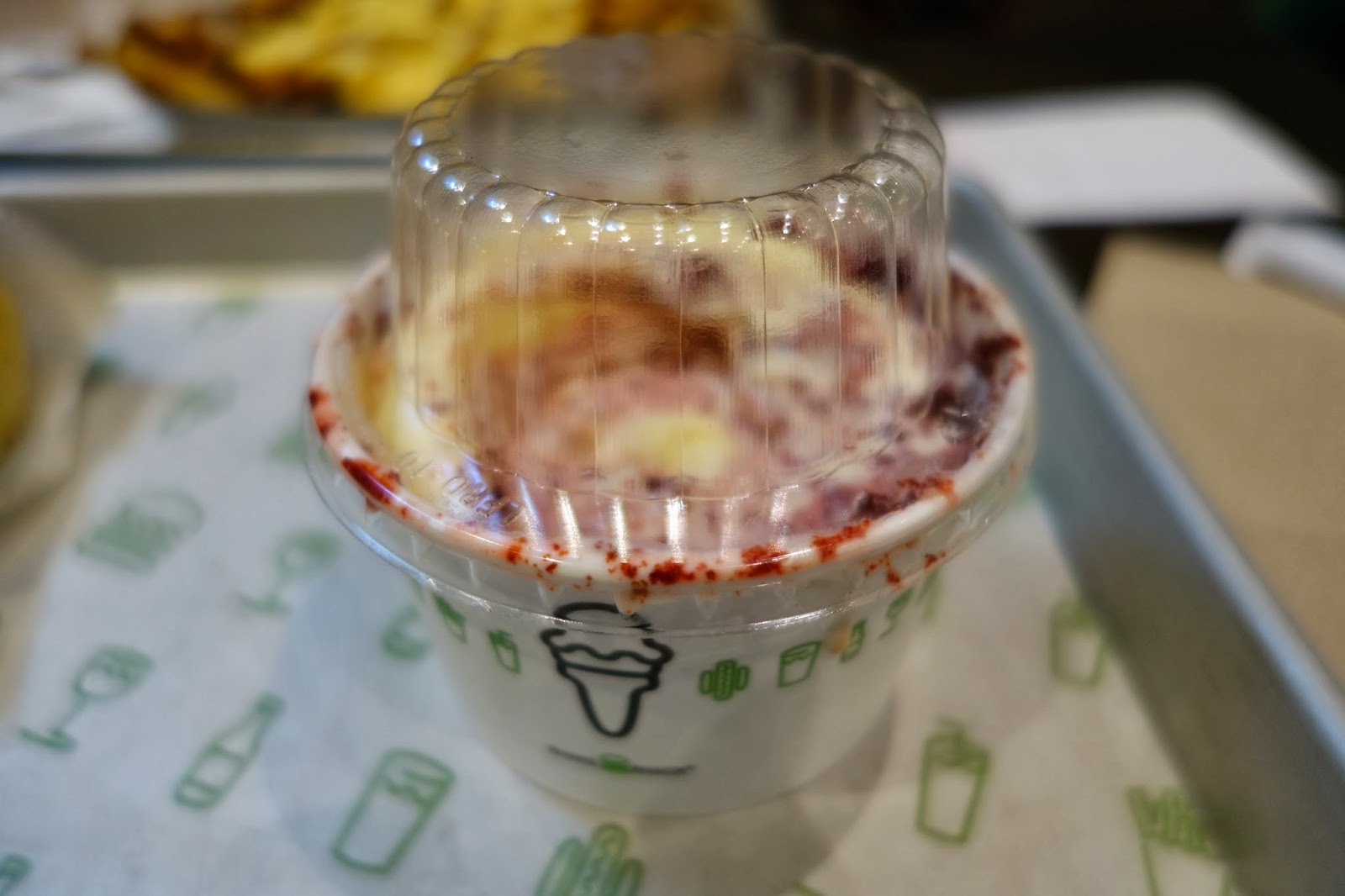 This concrete is vanilla frozen custard with a red velvet cupcake from The Buttery in the South End mixed in. 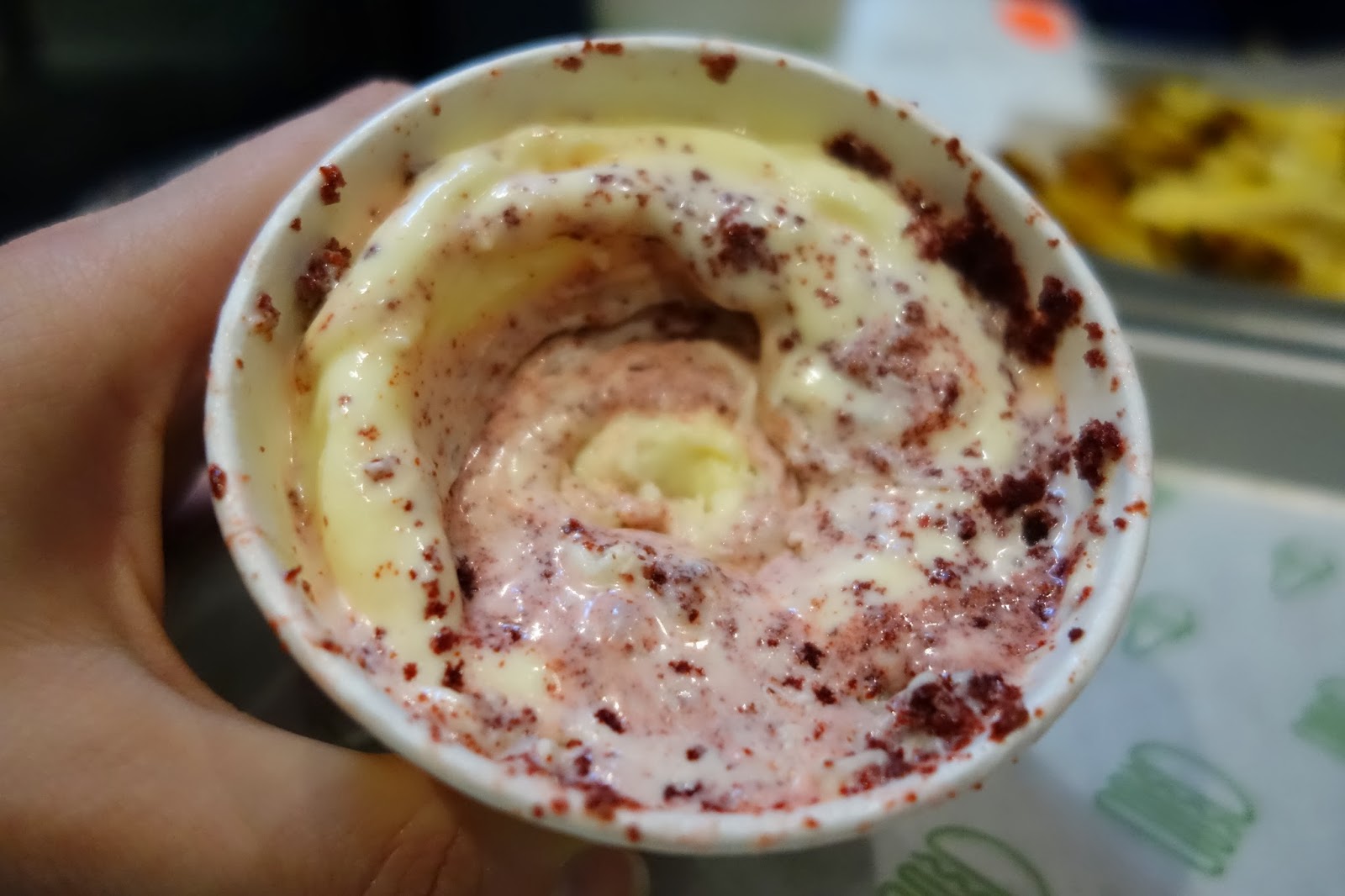 I have to say, this tasted more like a vanilla shake with a tiny sprinkle of a corner of a cupcake. In most bites you really couldn't taste the cupcake at all. I wanted way more decadence.

Overall, I couldn't be happier to have the Shack in Harvard Square, especially since I commute through there every day. This new location definitely has the "Shackness."

I was overjoyed that we didn't have to wait in line and this new space has two floors worth of seating: high top tables on the first floor and more tables and booths on the second floor.

Have you been to the new Shack Shack? What menu item is your go-to?

Ooh. I wonder if all the locations have changed the fries. I would so much prefer shoestrings!

I was just at the Chestnut Hill location on Sunday and they were serving all crinkle cut. I'm with you, I love the shoestrings! 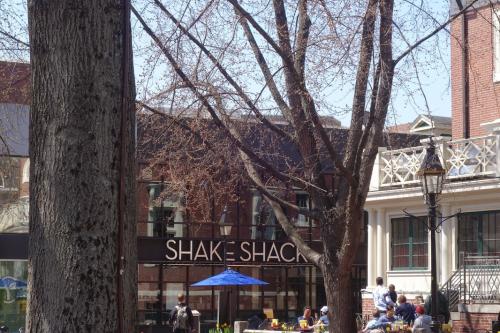 If you've been reading Pop.Bop.Shop. for a while, you already know I am a huge fan of Shake Shack. Though I normally only write about a restaurant on my first visit, this is my sixth post about the Shack. 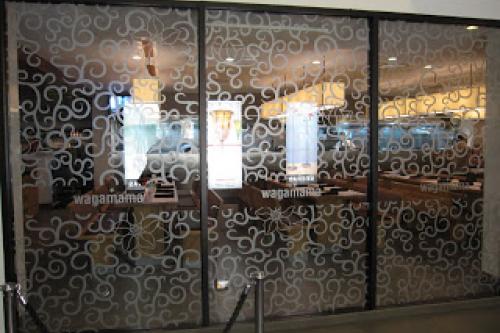 Monday night I met one of my favorite girls in Harvard Square for dinner and a catch up session. 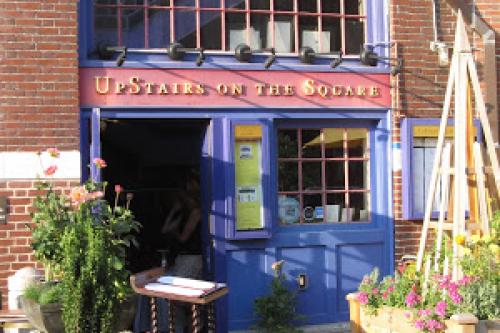 Dining Out: Upstairs On The Square

I've been to Upstairs on the Square countless times. I've gone for Restaurant Week, Mother's Day and for a bridal shower, yet somehow my visits never made it on to the blog! When one of my favorite girls asked if I'd like to help her spend her $100 gift certificate at Upstairs on the Square, I jumped at the chance! We made a reservation for tonight at 6:45pm.