Our last night in Paris we had resolved to return to the Italian restaurant we discovered on night one, Gambino. All day long we'd be talking about how excited we were to try their thin crust, topping covered pies we saw during our meal there on Thursday.

When dinner time rolled around we zipped up our coats and headed out in the blustery cold, anxious to order up this pizza.

We walked up to Gambino's front door and all the lights were off. Then we realized . . . it's Sunday.

France, like many other European countries, still observes Sunday as a day of rest and many businesses are closed. To say we were disappointed would be a massive understatement.

After resisting the urge to have a tantrum right there on the sidewalk, we moseyed back in the direction we came from in search of a new spot.

We looked at a few menus and ultimately decided to try a place that looked pretty popular, Razowski.

Razowski has a large outdoor patio that is open to the sidewalk in the nice weather and protected by a plastic tent in the colder temperatures. 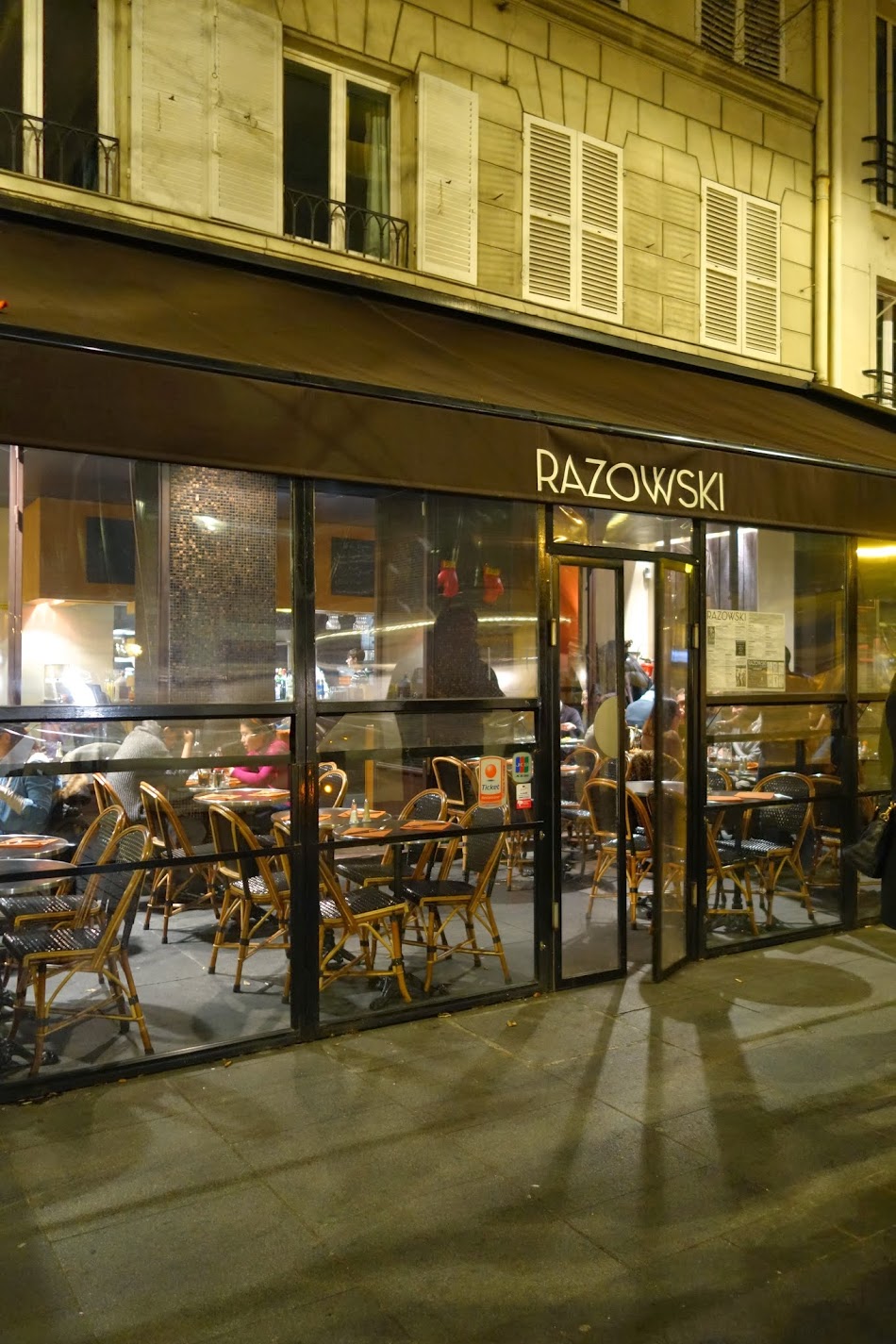 Inside, the first thing you see when you walk through the door is the open kitchen. 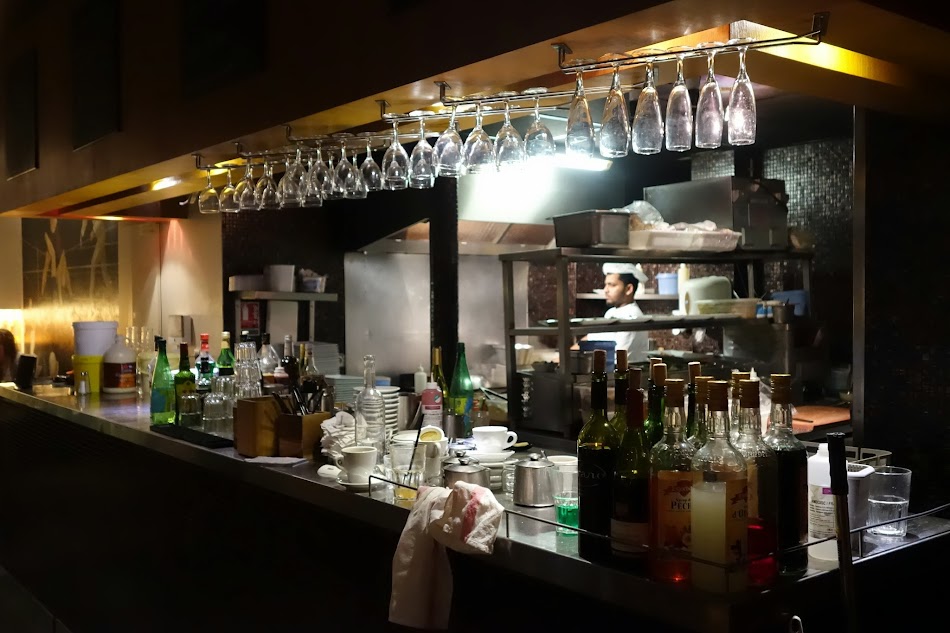 To the left is a dining area with the restaurant's name across the wall. 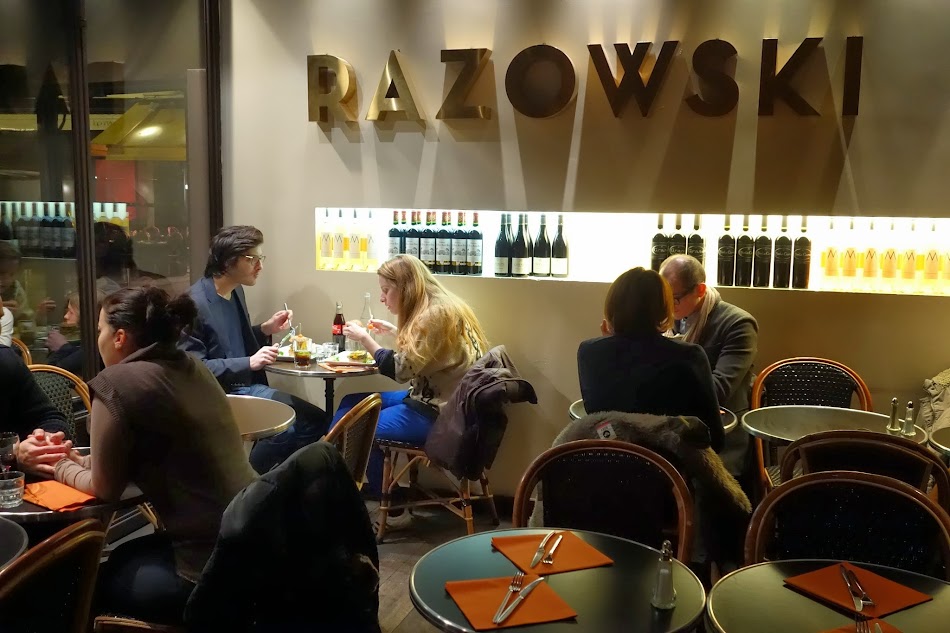 To the right is another set of tables. I couldn't get over the black and orange color combination. It's like Halloween all year round. 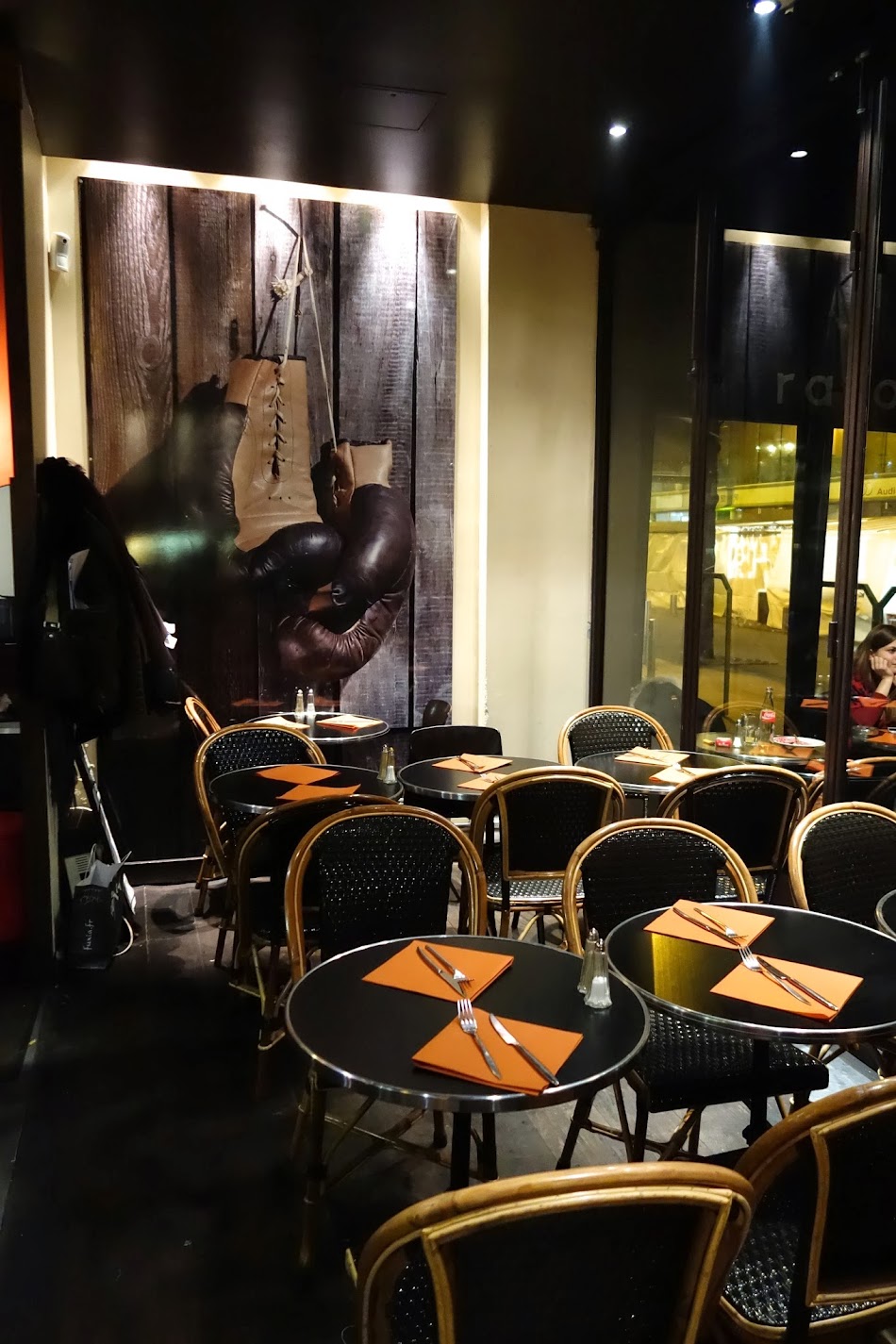 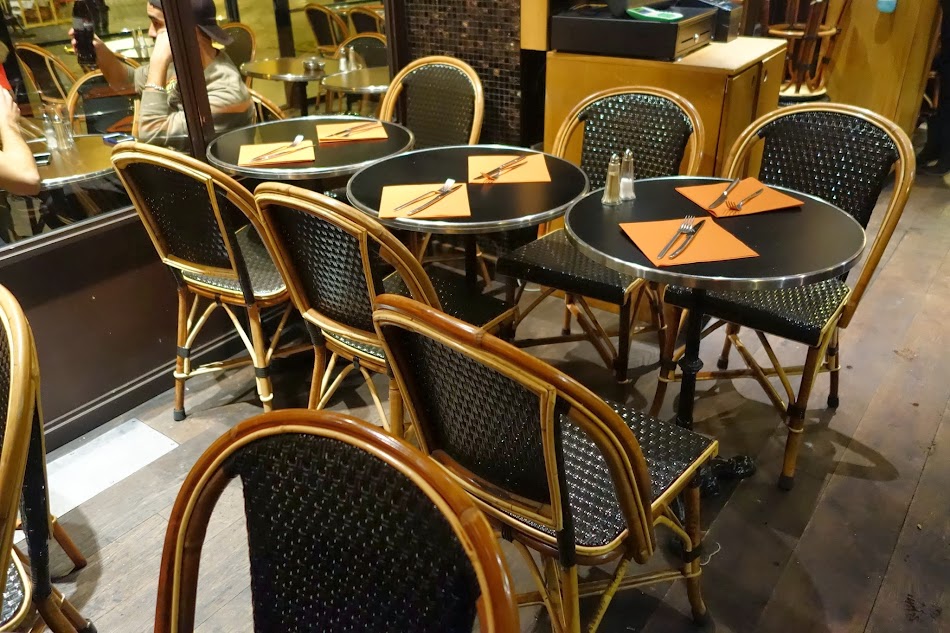 From where we were seated we could people watch both inside the dining room, on the patio and out on the street. 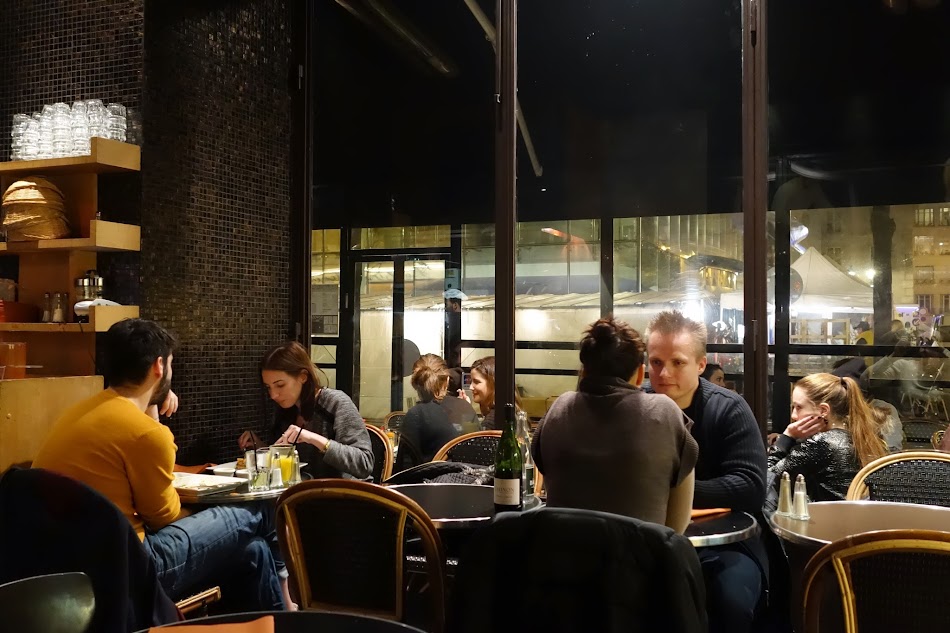 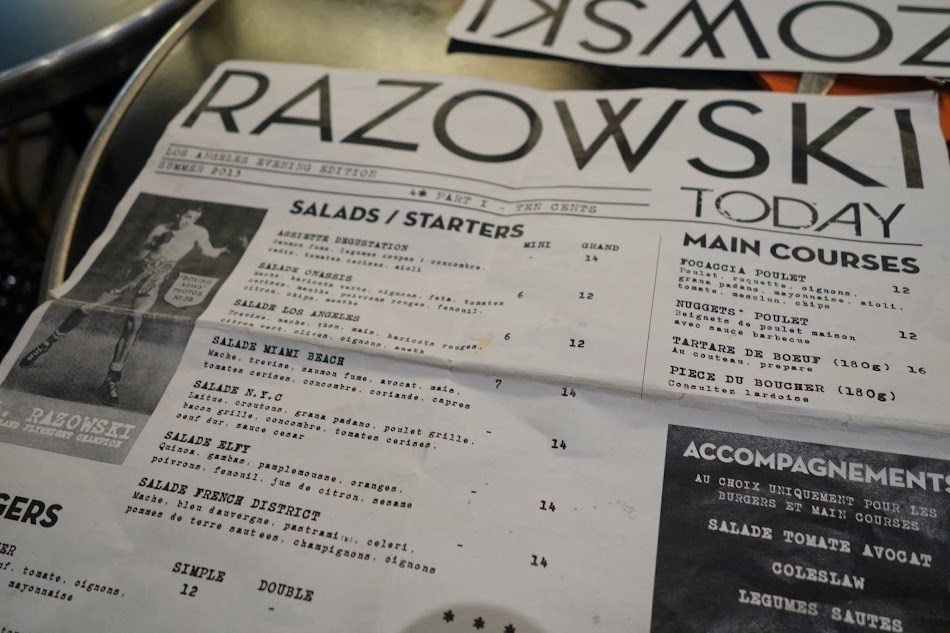 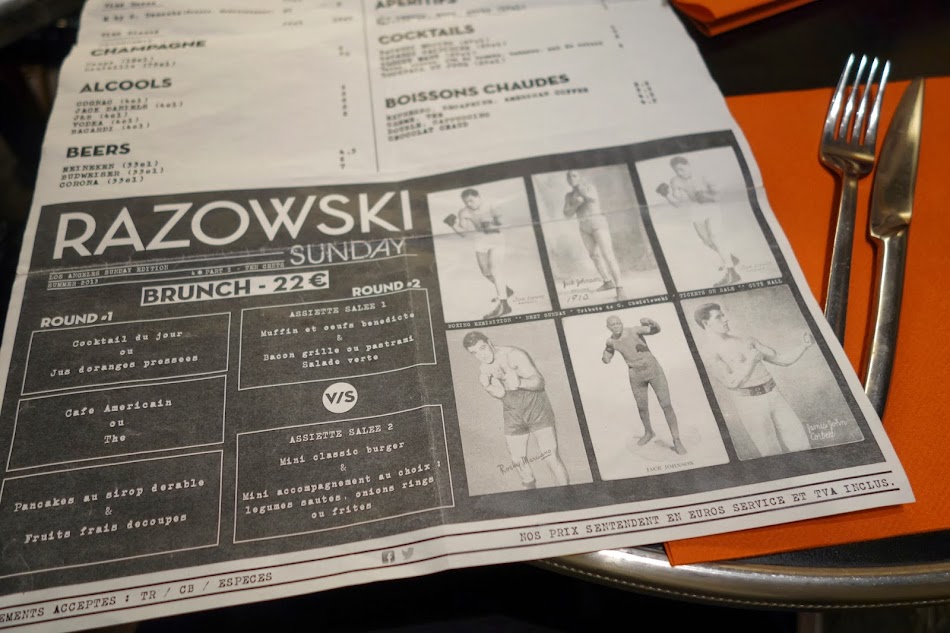 I started the meal with a Bloody Mary. Rather than have any spice mixed into the drink itself, they give you Tabasco sauce and celery salt to do your own seasoning. 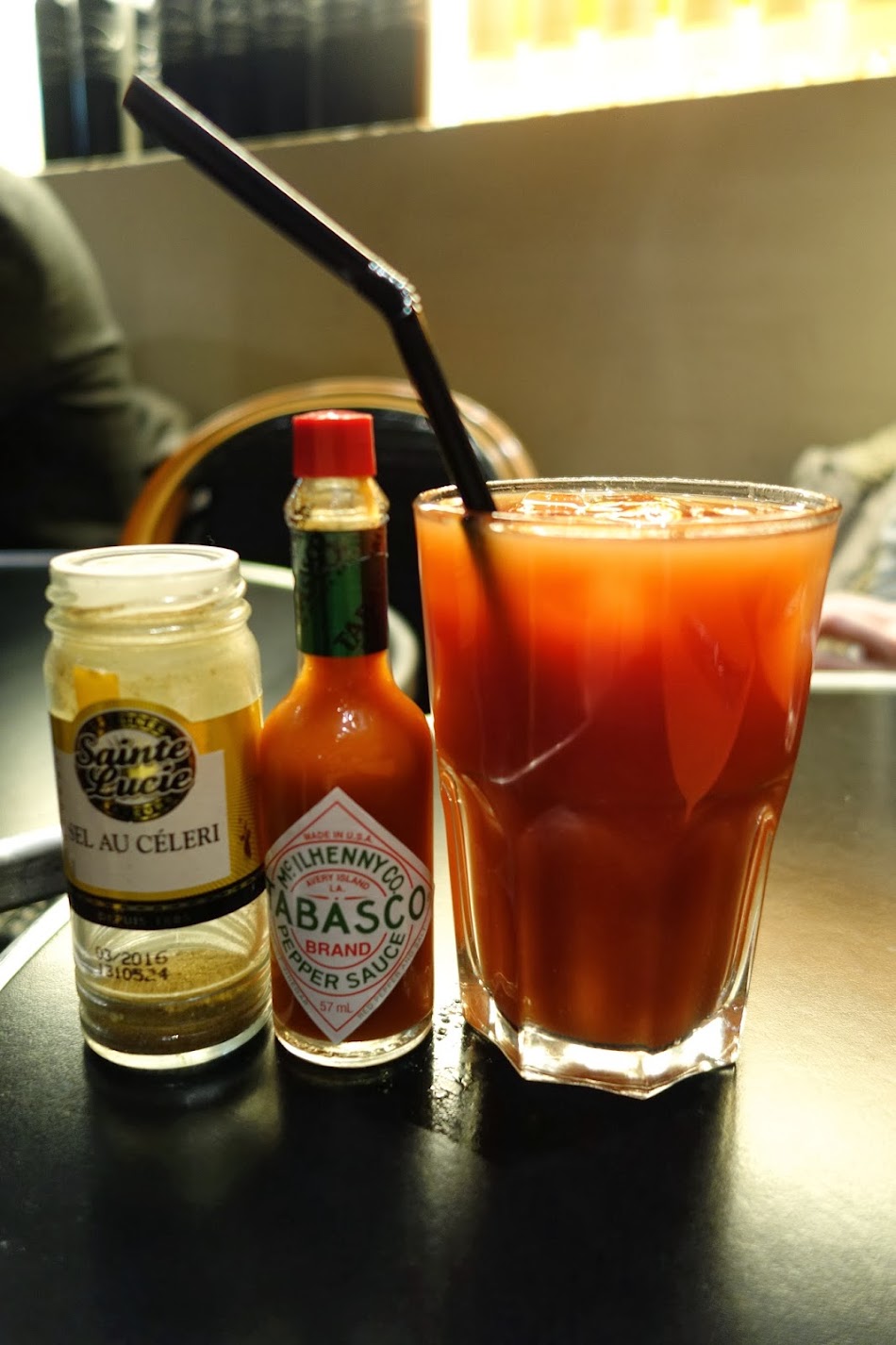 Unfortunately, this Bloody tasted like cold tomato soup. It was so icky that I didn't even drink half of it.

For dinner we both ordered veggie burgers. We definitely had some guilt about ordering such an American food on our final night in France, but justified it by telling ourselves, "We weren't even supposed to be at this restaurant tonight!"

My travel buddy ordered the veggie burger with a side of onion rings. 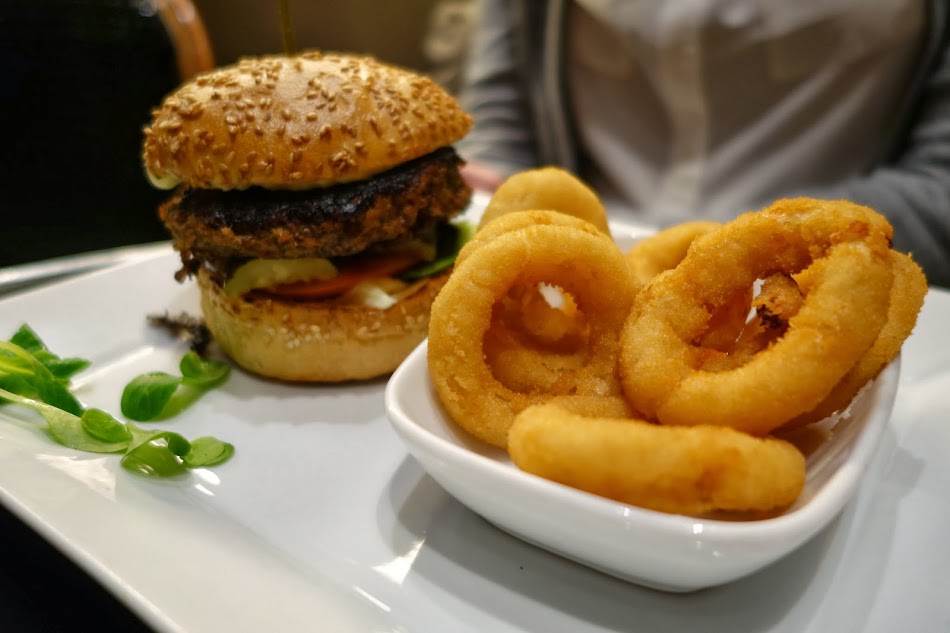 The burger looked so real that she was afraid it might actually be meat. I taste tested and assured her it was veggie. The patty reminded me of the patty at Hillstone. 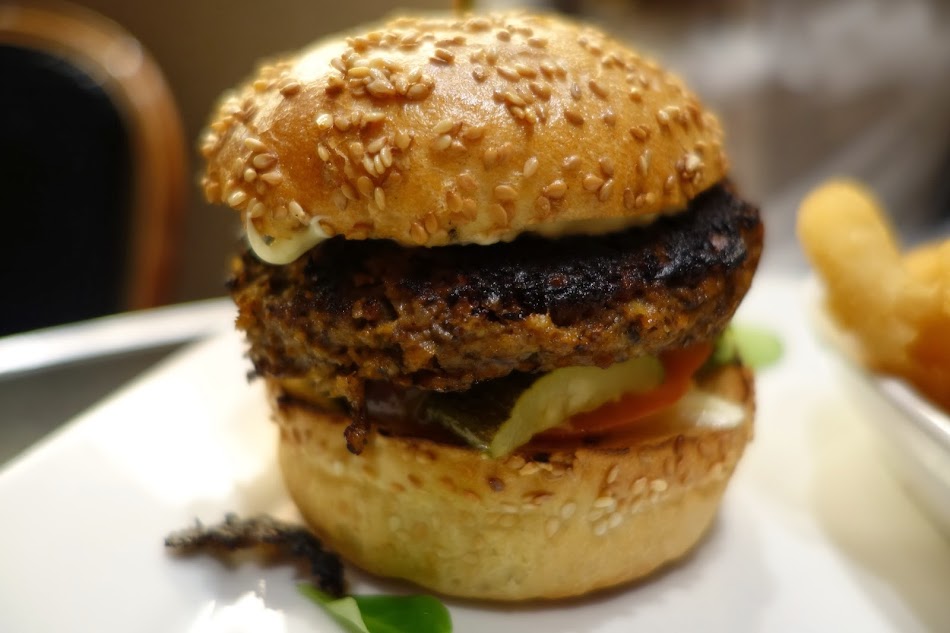 She was kind enough to let me sneak some onion rings and they tasted just like the best versions, the ones served at clam shacks and seafood dives on Cape Cod. 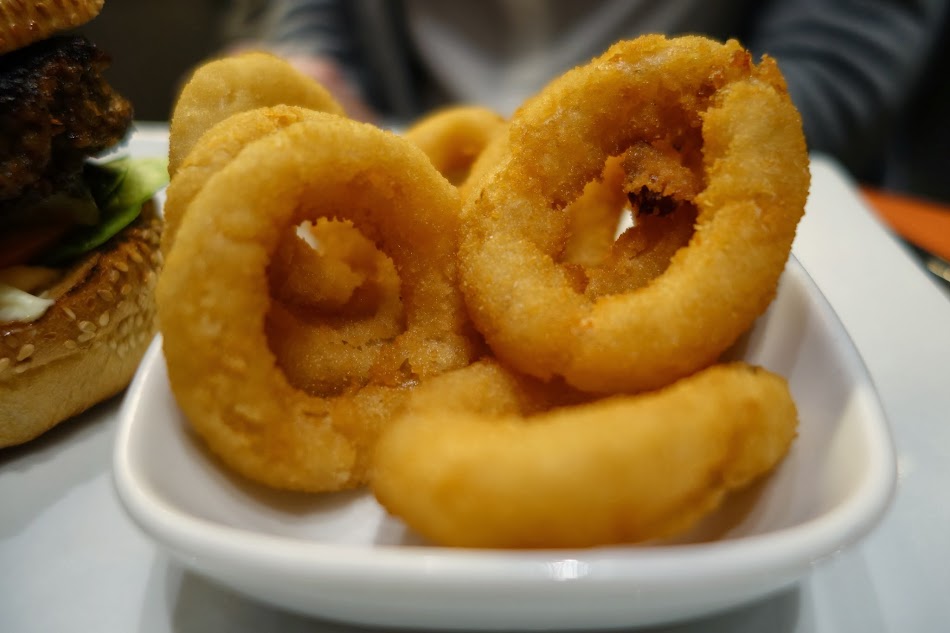 I ordered my veggie burger with a side of frites (I really ordered them for the mayo, who am I kidding). 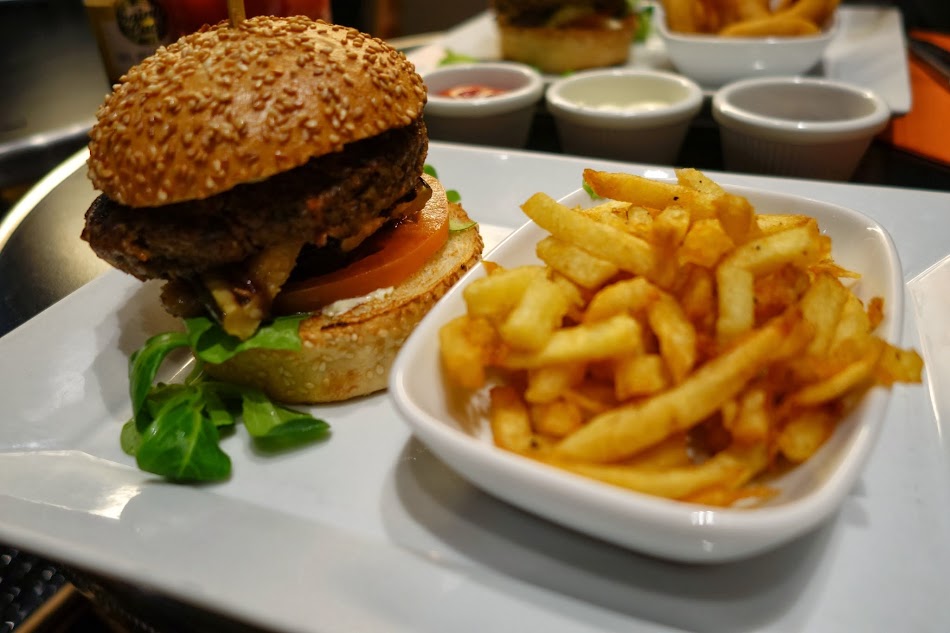 The veggie burger came topped with lettuce, tomato, pickles, grilled veggies and mayo and was served on a sesame bun. I have to say, this is one of the better veggie burgers I've had. 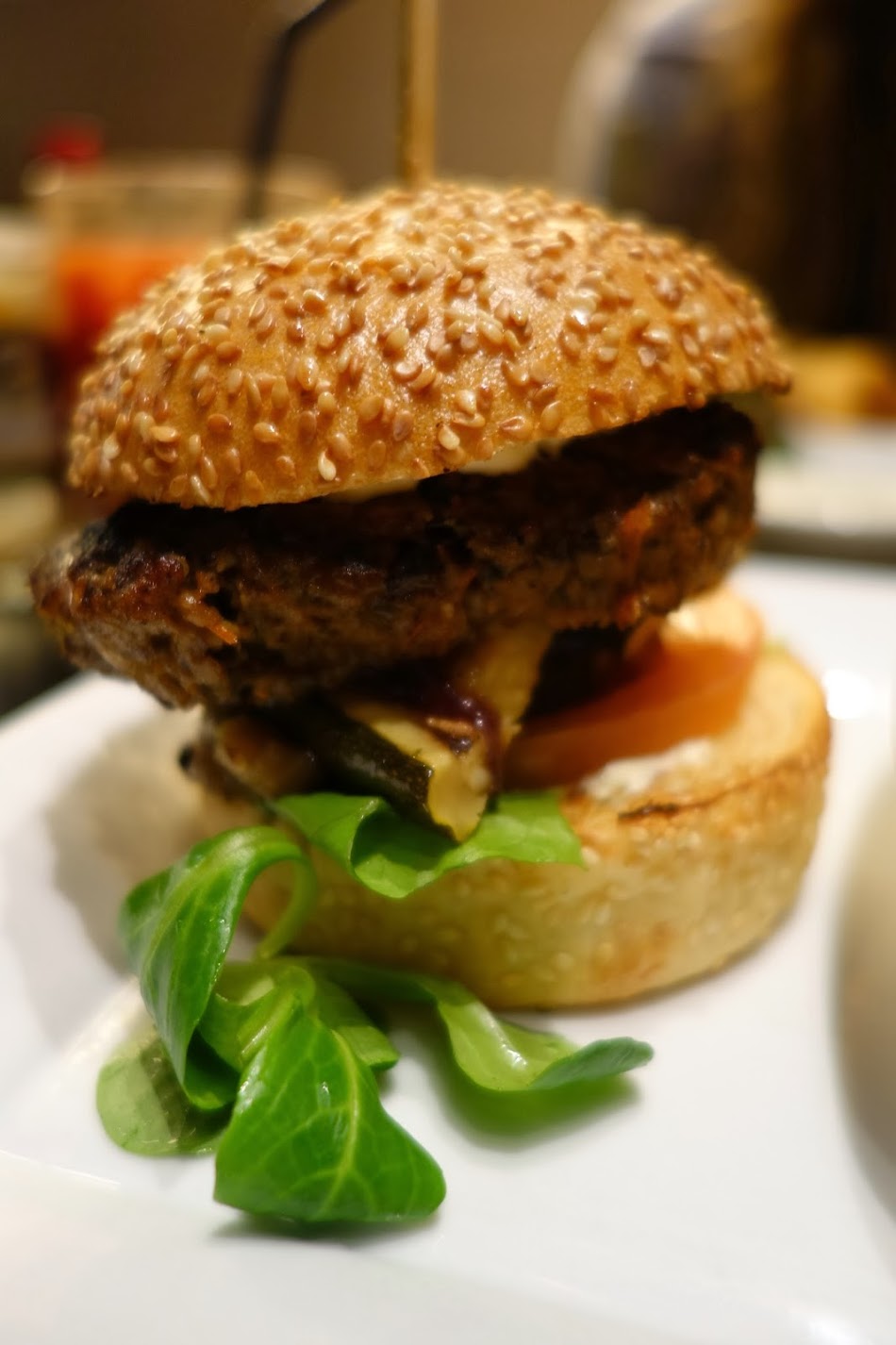 My frites were expertly crisped and golden. 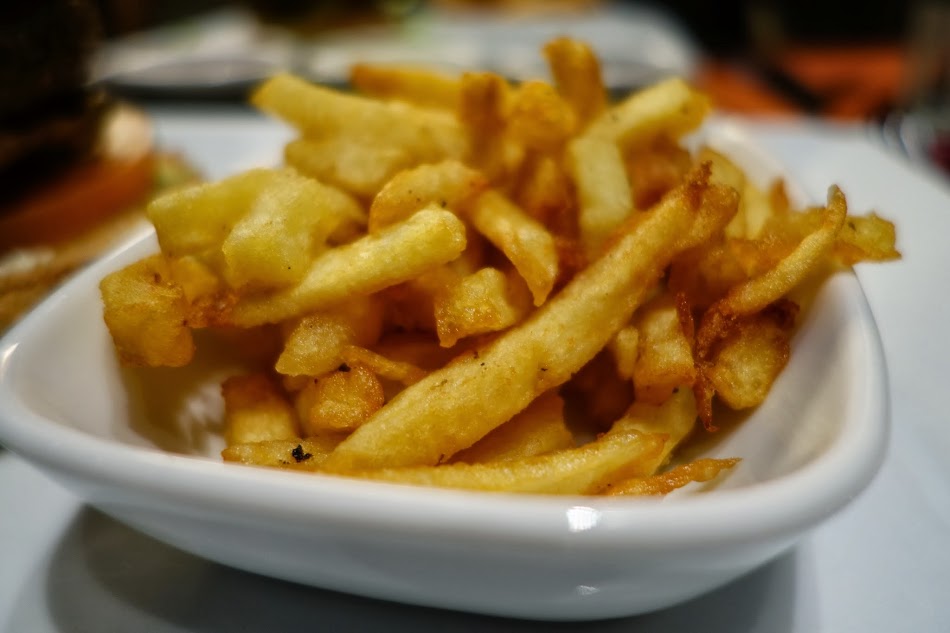 Razowski really won me over when they served the frites with ketchup, mayo and BBQ sauce. Do you know hard it is for a vegetarian to find opportunities to eat BBQ sauce? 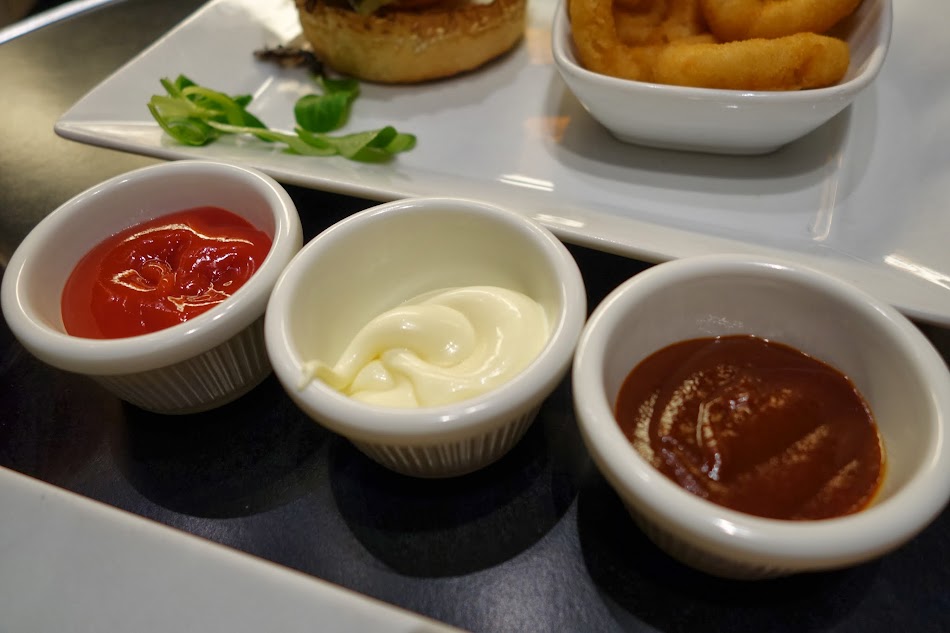 Though we intended to stuff our faces with pizza at Gambino, in the end we uncovered yet another great dinner spot in our neighborhood. The Razowski veggie burger is a serious contender and the three dipping sauces for the frites puts them in a class above the rest.

And there you have it! My final recap of the Paris trip. I hope you have enjoyed reading about this French adventure as much as I've enjoyed sharing it with you.

Anyone going somewhere fun or exotic for the holidays?

I wish we had asked how they made the patties, to be so meat-realistic!

We totally should have. Note to self for our next visit: Learn French.

เกม 123
Guaranteed by the service for a long time. 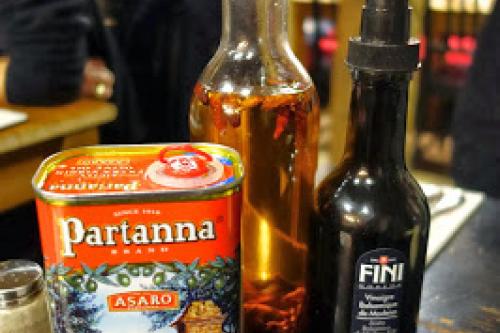 If having Italian food your first night in France is wrong, I don't want to be right. After an overnight flight, checking into our hotel, shopping, and meeting the fellow American wedding guests for drinks, we headed back to our neighborhood in search of dinner. 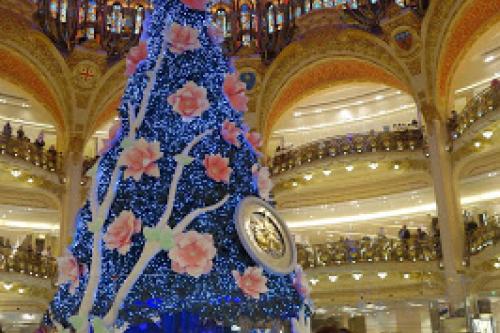 Yesterday I shared with you my glorious morning at the Galeries Lafayette, staring at the Christmas windows, being mesmerized by the six story tall sparkling tree and lusting after floor after floor of designer duds. To cap off our time at the Galeries Lafayette, we decided to have lunch at the champagne and caviar bar called Kaspia. Just like the rest of the mall, the Kaspia Bar drips decadence. 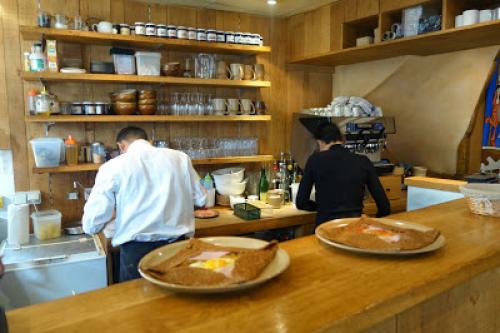 I am continually impressed by the power of the internet. I can Skype with my family and friends in Israel, watch my baby cousin in Florida learn to walk on FaceTime and get a recommendation for the best crepe place in Paris on Instagram.