Back in January 2012 I made my first trip to Shake Shack in New York. I fell in love, so imagine my surprise and delight to learn the Shack was coming to Massachusetts!

Last week I ventured out into suburbia to visit our great home state's inaugural Shack. It's in Chestnut Hill, in the strip mall that used to house the movie theater and Macy's, but is now a new commercial development called The Street.

When you park in the lot, you walk toward the Shack from the back. 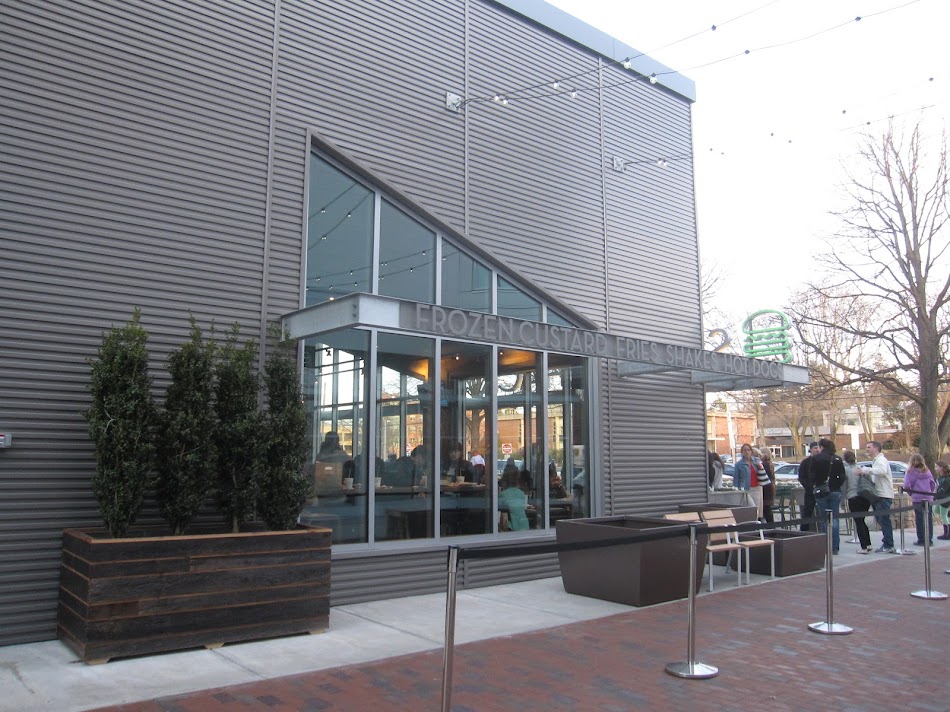 We arrived around 6:45pm and the line was already out the door and snaking around back. 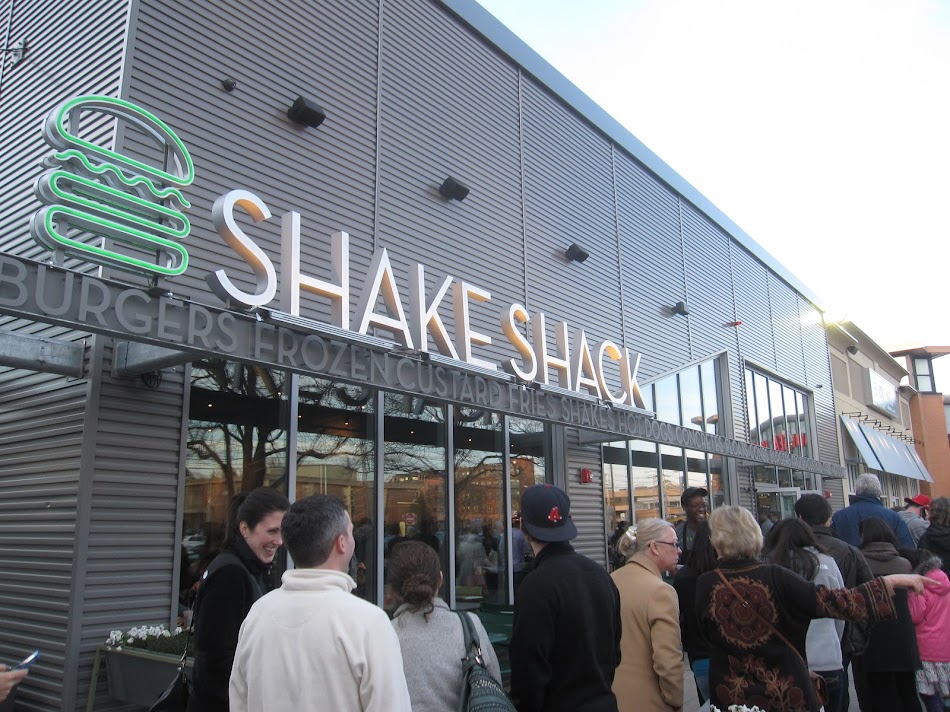 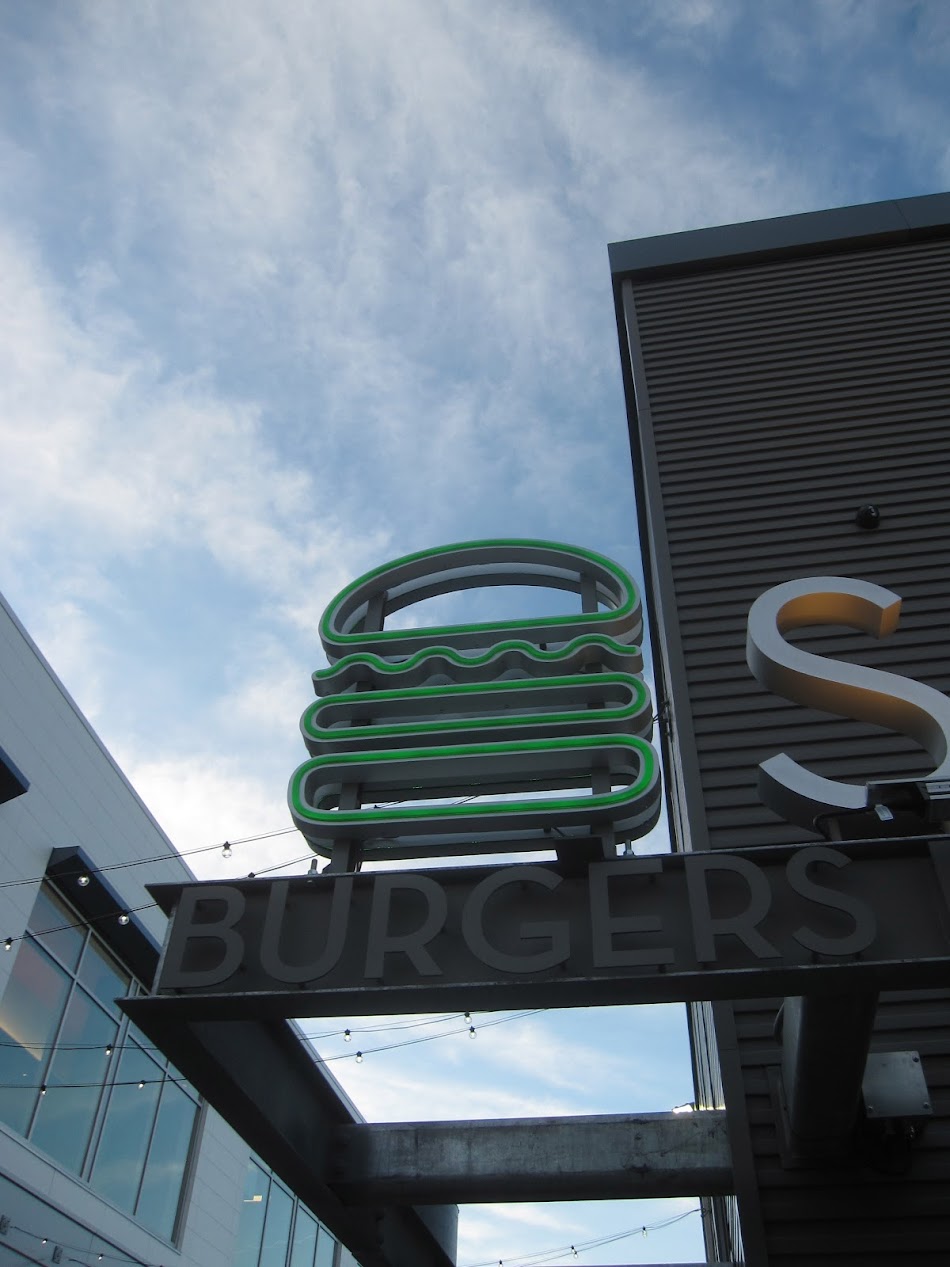 This Shake Shack location has a ton of outdoor seating. It was way too cold the night we went, but in the summer, this will be great. 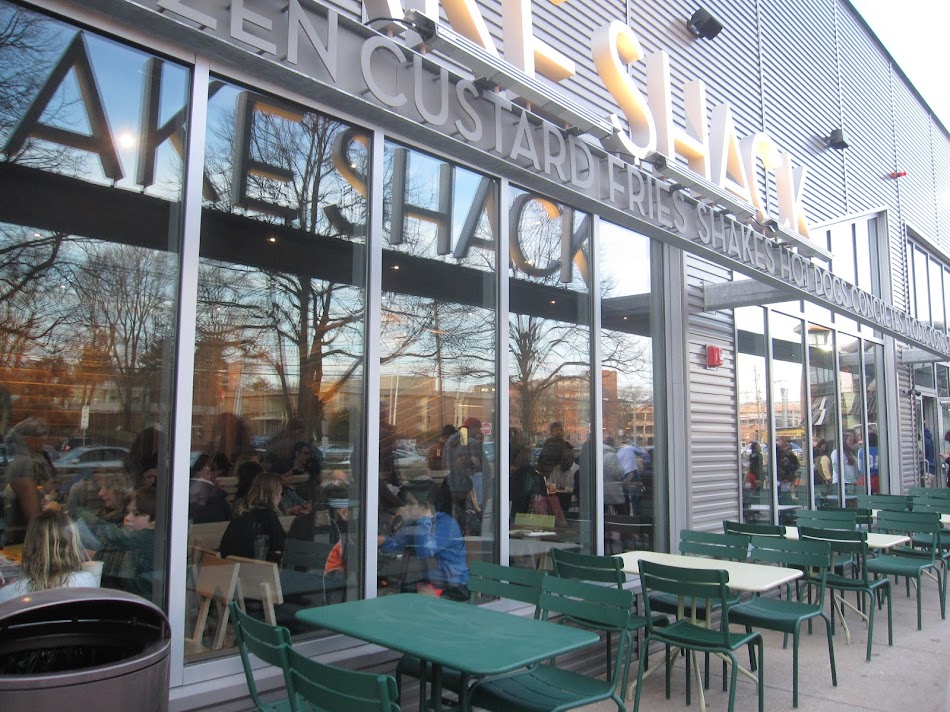 There is an additional row of tables that look out toward Route 9. There is a long strip of gravel next to the tables right now, though it seems the construction is not yet complete. Hopefully they add planters or water features. Right now it's not very visually appealing. 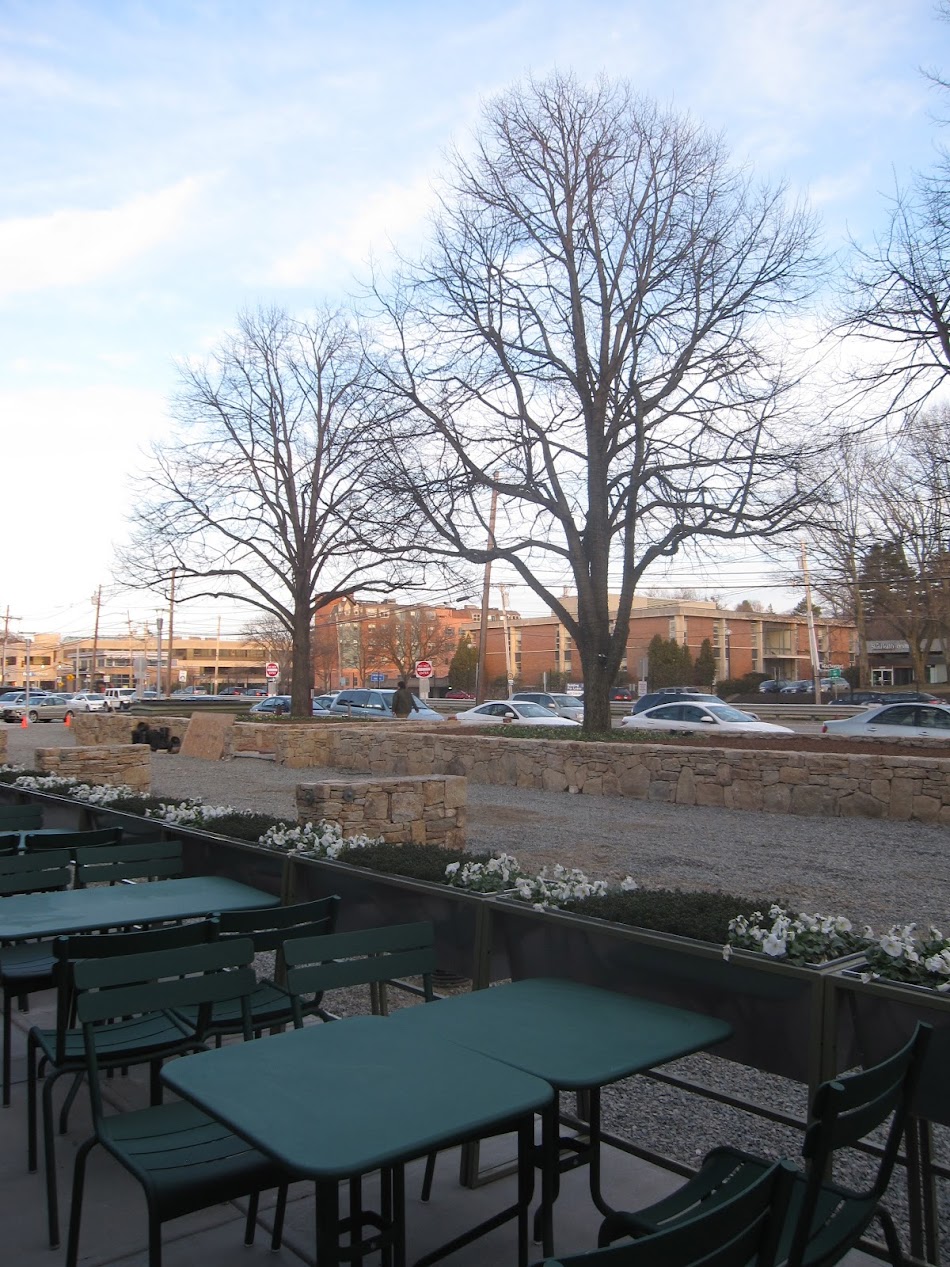 While we were standing in line we were quite cold and one of my friends said, "It would be awesome if they put space heaters out here." Then another one of the girls noticed that they do have them, but they were still in boxes on the patio. 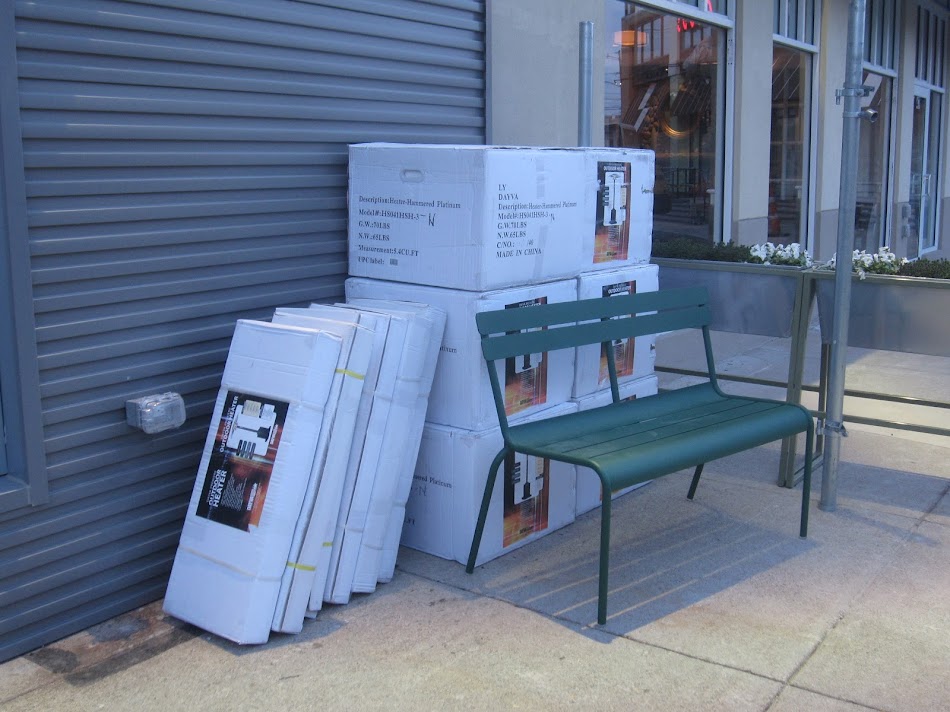 While you wait, there is a server walking through the line handing out paper menus. Though the burgers and fries are the same at all Shake Shacks, each location has concretes (their version of milkshakes) that are specific to the location.

The Boston concretes are called Revere's Tracks and Lobstah Shell. Both very cute names and concepts, but totally unappealing to me. 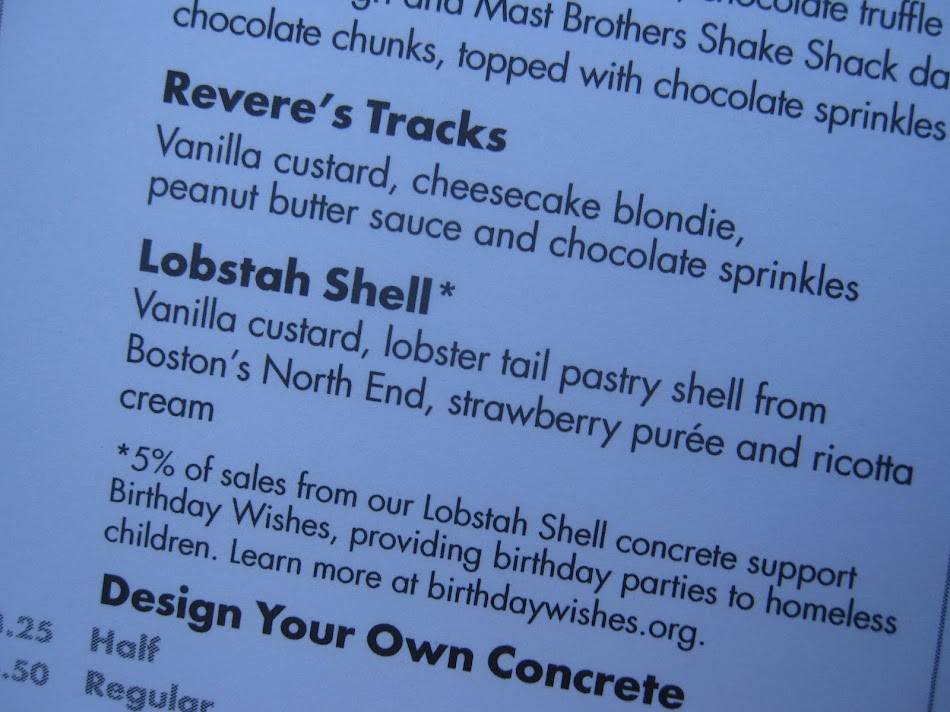 After about 30 minutes in line outside, we finally made it to the line inside. The first thing I noticed was the wi-fi sign, which has the signal beaming out from a burger. Too cute! 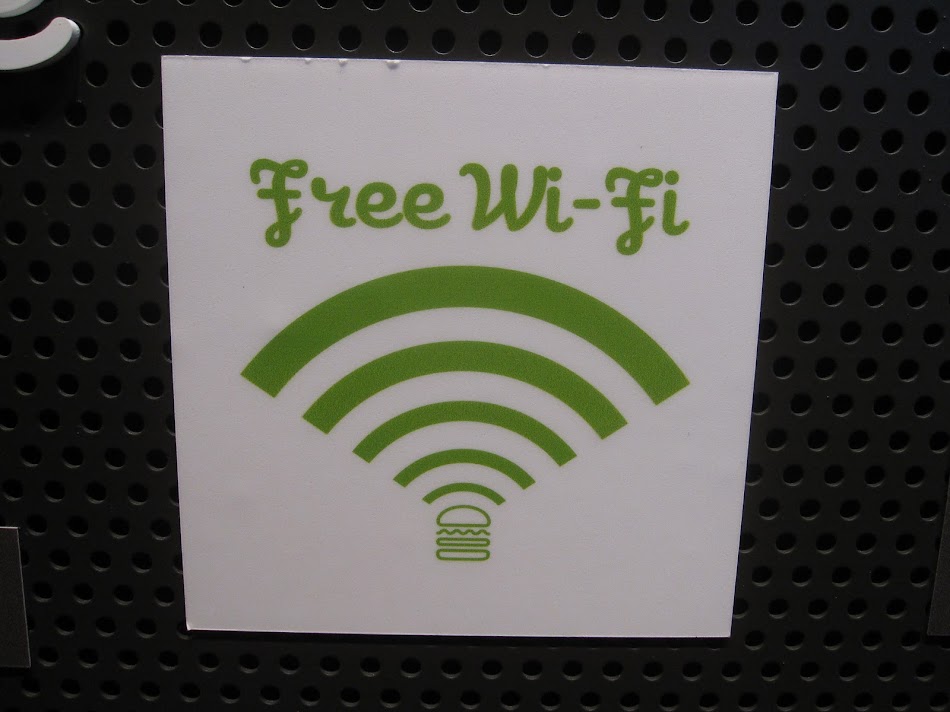 The inside of the restaurant actually feels like you are still sitting outside. It reminded me of Back Deck in Downtown Crossing in that way. 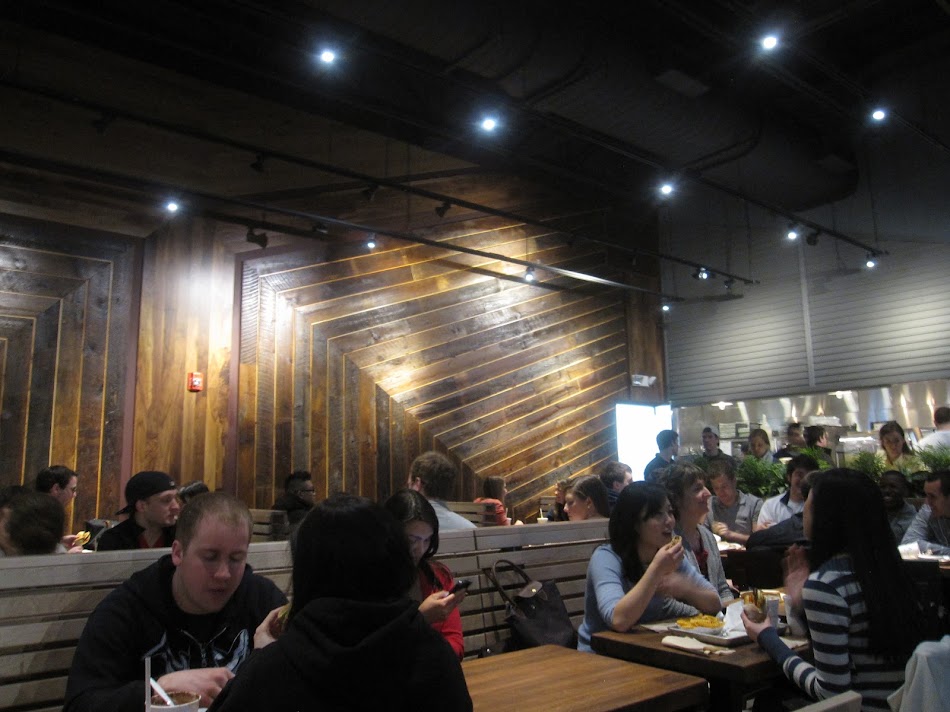 Though we waited an eternity to place our order, getting a table was a cinch.

The tables are made from old bowling lanes and have a Shack burger burned into the corner. 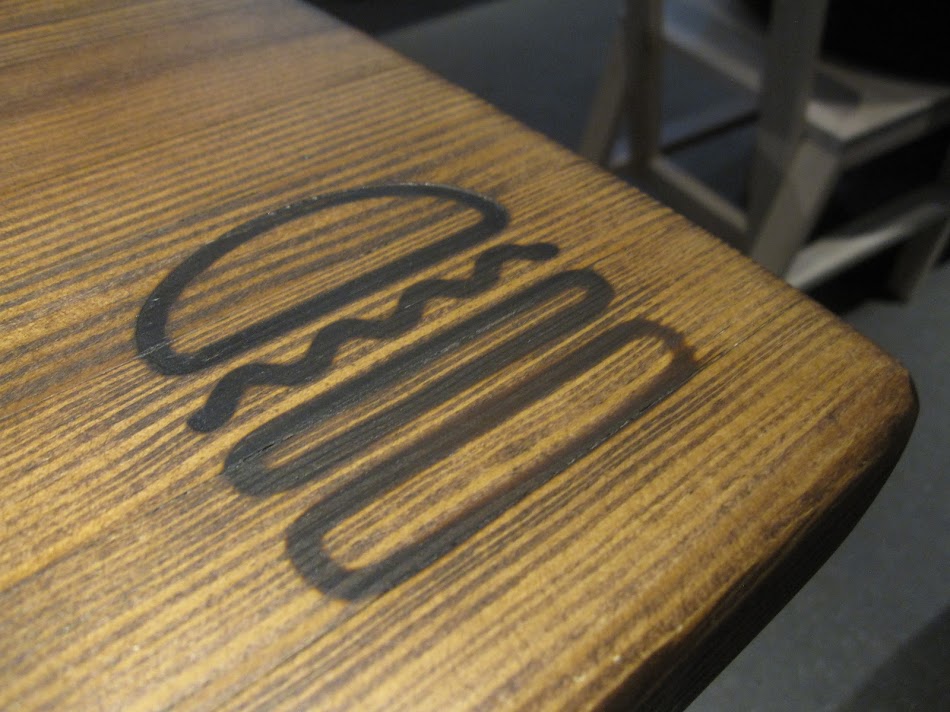 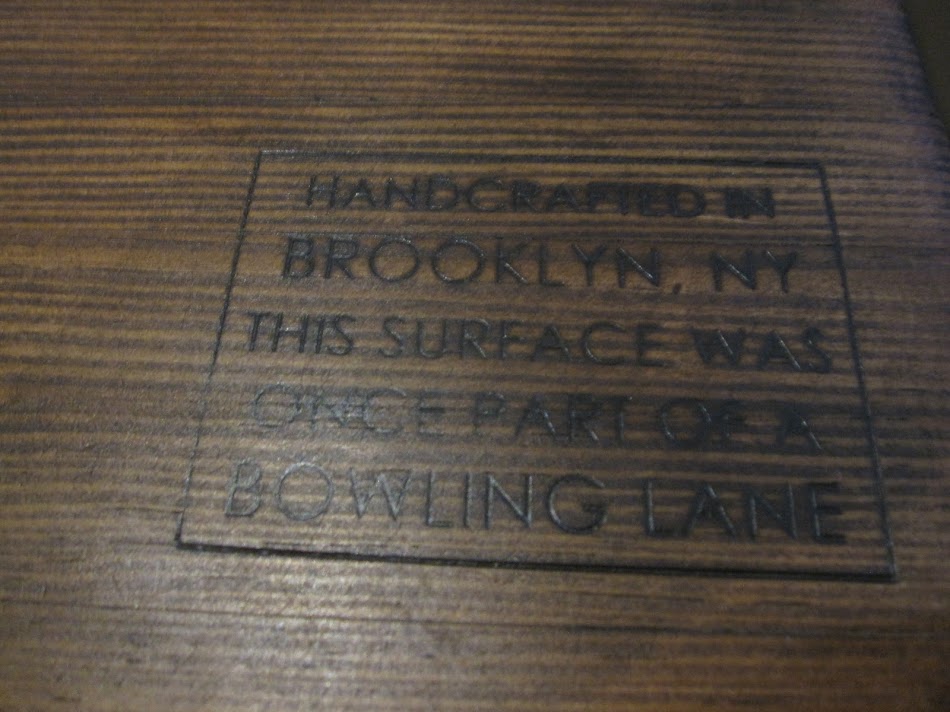 Each group gets a buzzer that will alert you when your food is ready. It says, "I scream, you scream, we all scream for . . . frozen custard!" 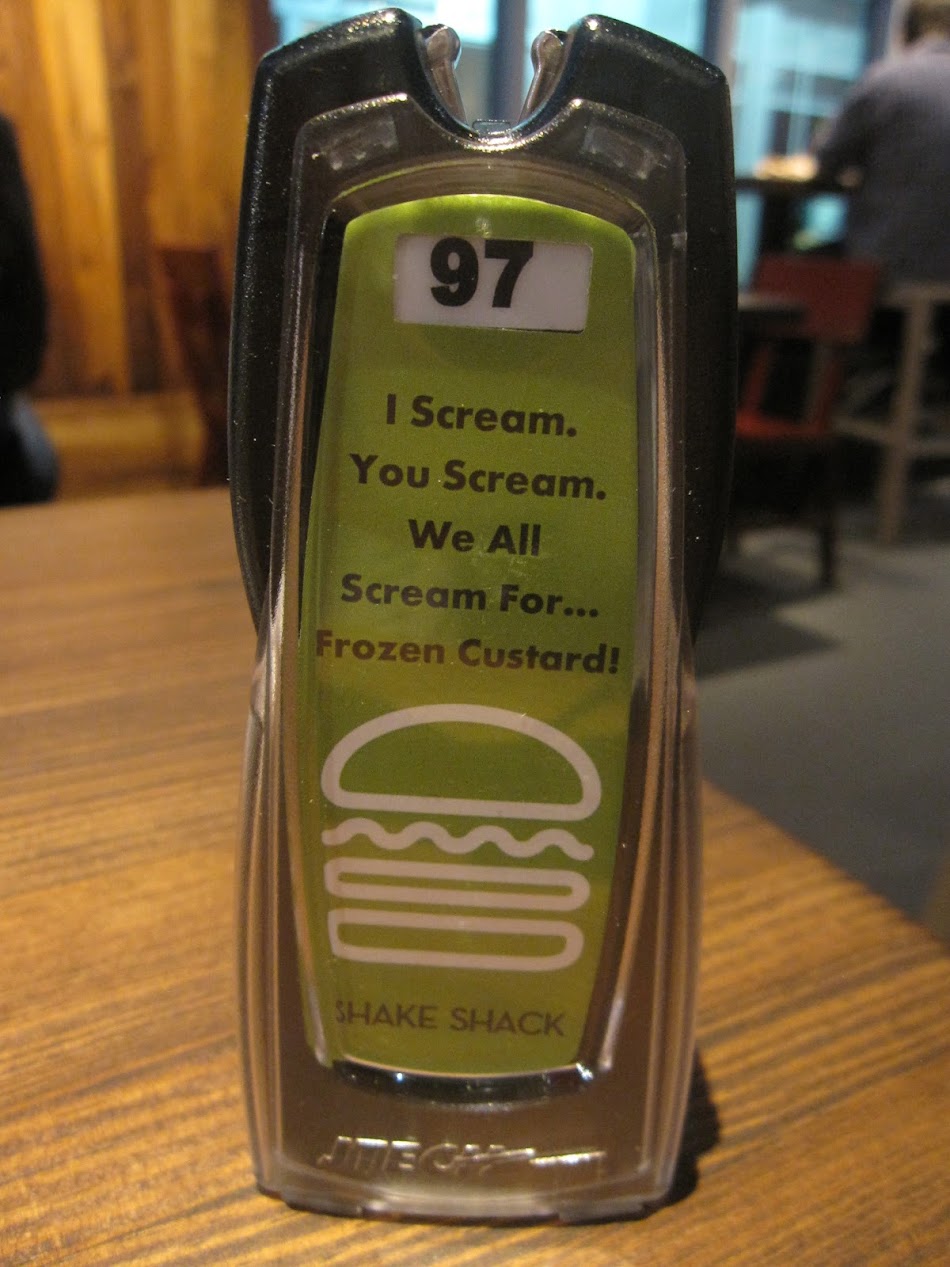 There were four of us dining together that night and we sampled three different burgers. The first which was the classic Shack burger. She friend who ordered it said, "The burger was expertly cooked. Crispy on the outside. I will totally order this again." 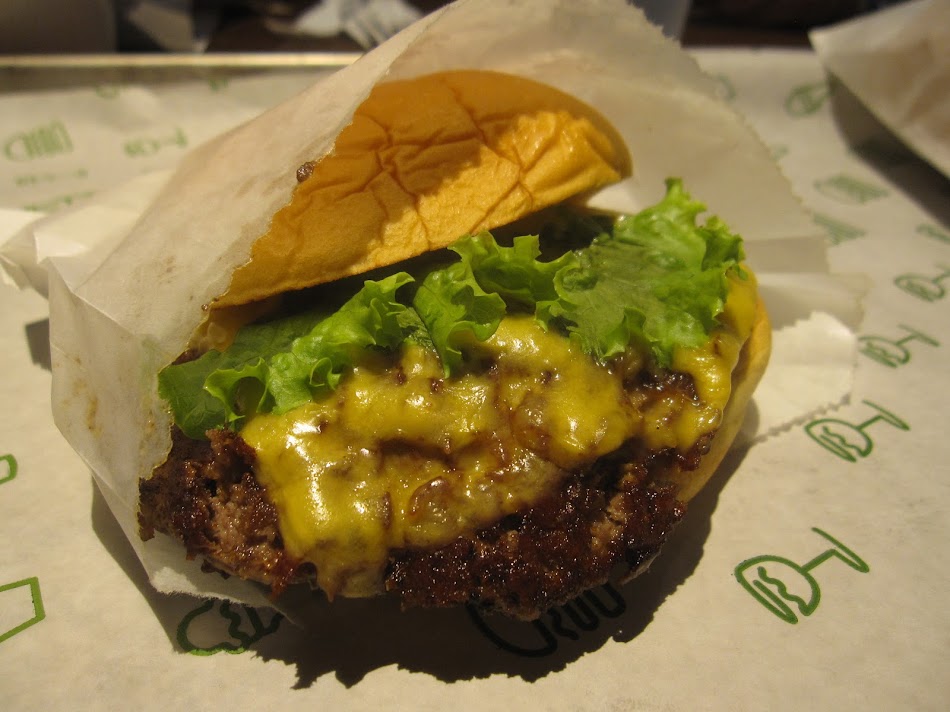 Next up, my 'Shroom burger which is a portabello mushroom, stuffed with cheese, fried and slid into a bun. 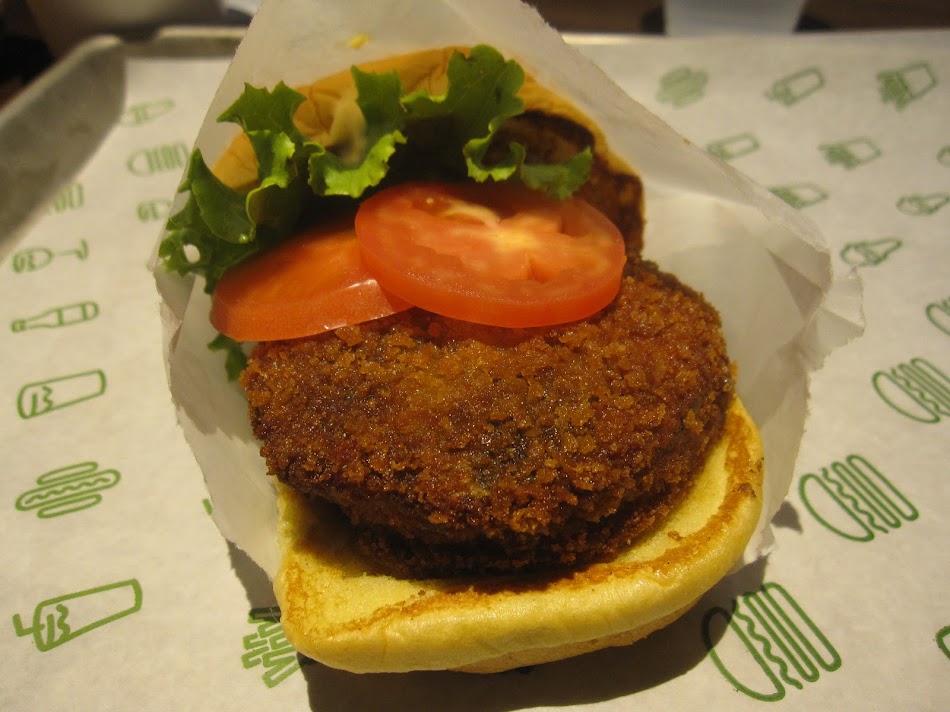 When you bite into the mushroom, this happens: 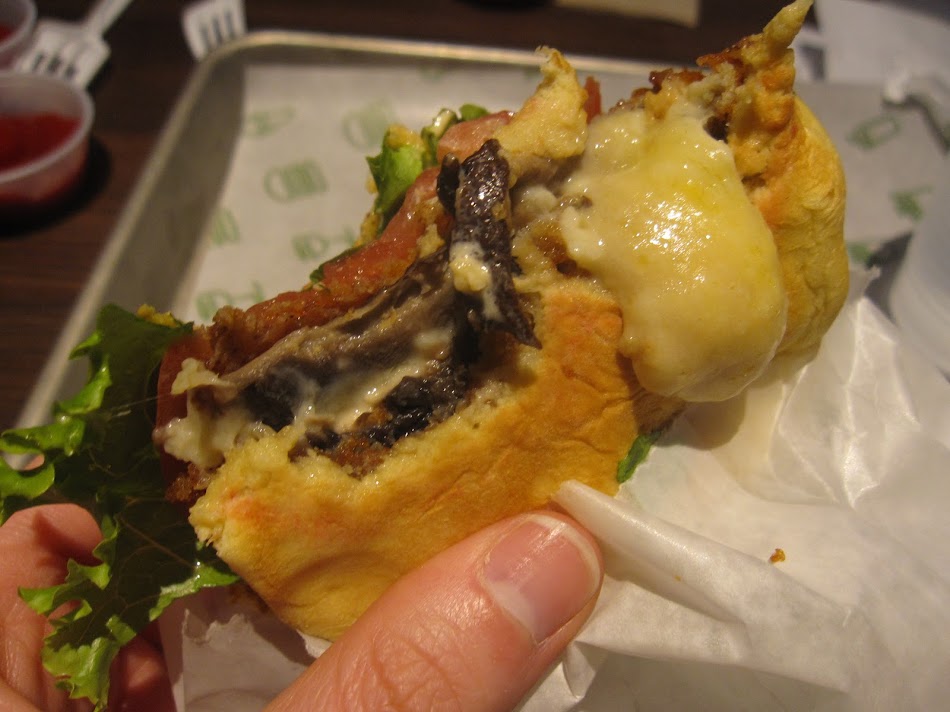 Vegetarian heaven, party of one.

Two of the girls were bold and ordered the Shack Stack which is basically the Shack burger topped with the 'Shroom burger. 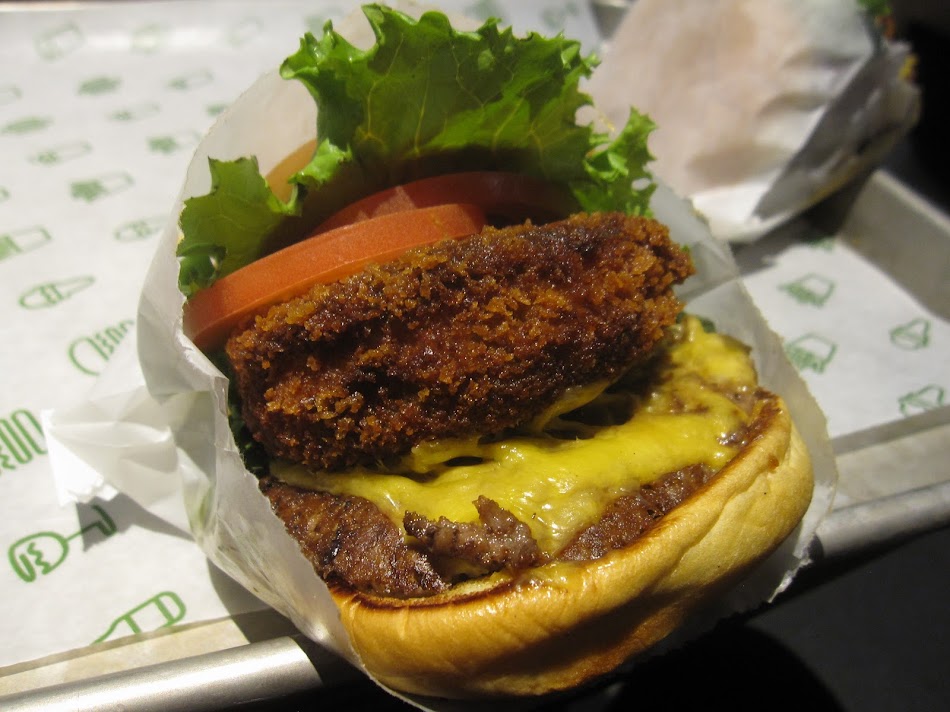 They shared, "We loved the mushroom part best. It was so gooey! You definitely need extra napkins. The bread was also delicious and that special Shack sauce - yum!"

You can't have a burger without French fries, so we also placed two orders - one plain and one cheese. I can't say enough about these cheese fries. I became obsessed with them in New York and they're still the best. The crunch from the crinkle cut paired with the creaminess of the cheese is perfection. 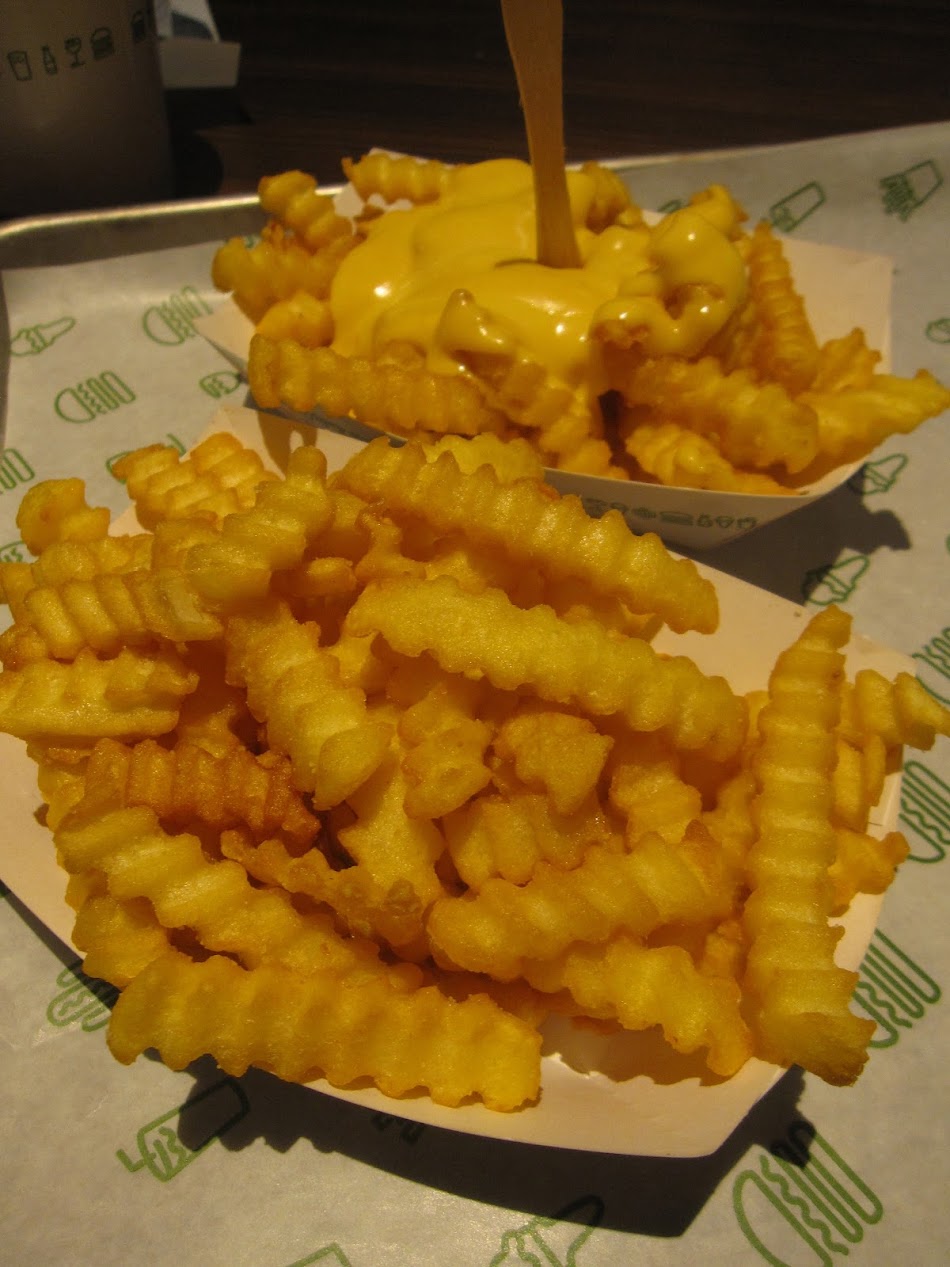 Now, I know what you're thinking, of course you ordered a concrete, you love ice cream. Well, this is true, but that same night, Pinkberry was having their grand opening next door and anyone who visited received a free swirl, unlimited toppings. Though we had to wait in a new line for another 30 minutes, it was totally worth it.

Though our food at Shake Shack was great and I am definitely going back to try the Boston Cream Pie custard, I have to say, this location in Chestnut Hill is missing "The Shackness." When I saw owner Danny Meyer speak in New York, he said:

"When I go scout a new place, I sit down, imagining myself as the diner with their burger, fries and shake and I ask myself - does location make me feel relaxed? When I look around am I taking in scenery that feels amazing, inspiring and like classic New York? Does this location help me escape from my life for just five minutes and have a genuine, uplifting experience? That's Shackness."

This location doesn't have that special feeling. It's not in a spectacular location like Madison Square Park or adjacent to the Museum of Natural History. It feels a bit like selling out.

Have you been to the new Chestnut Hill Shake Shack? What did you think?

My earliest memory of eating donuts is at the airport. Every February my parents, my sister and I would fly to Florida to visit my grandparents and if we were well behaved, my parents would let us get a treat from Dunkin Donuts before we got on the plane. 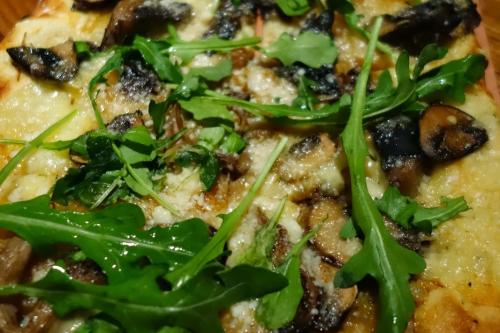 Growing up in Newton, MA, Chestnut Hill was the neighborhood I visited when going to the movies with my friends. The strip mall the movie theater was located in was nothing special, mostly just a giant parking lot. Now, that same plaza has been completely transformed and redesigned into a development called The Street. 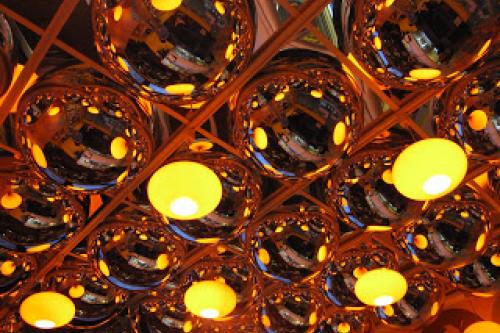 One of my favorite, local spots is Angora Cafe on Commonwealth Ave next to Boston University.