While in New York City I had a girls night out that began with dinner at Mexican Radio in Soho. 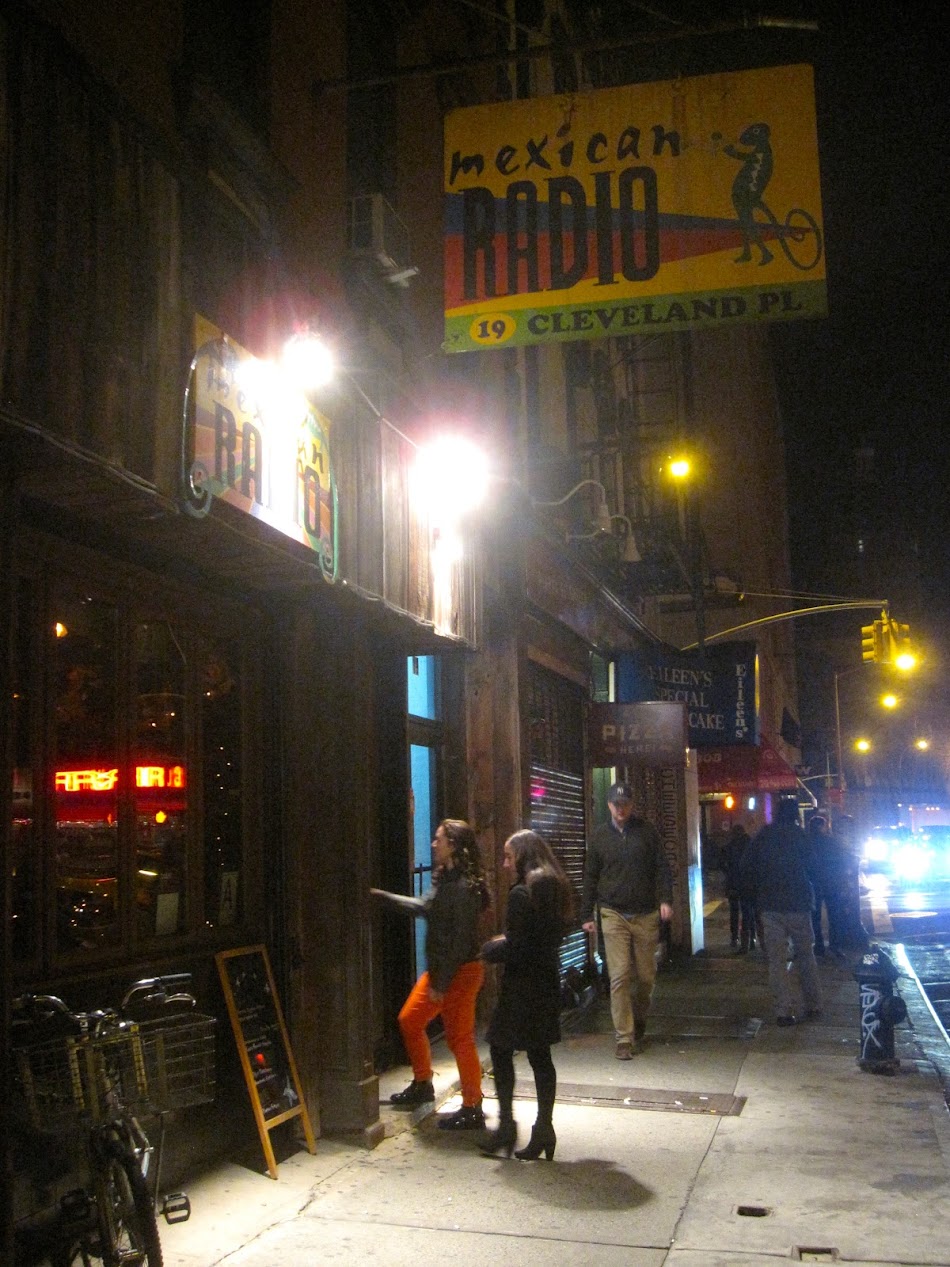 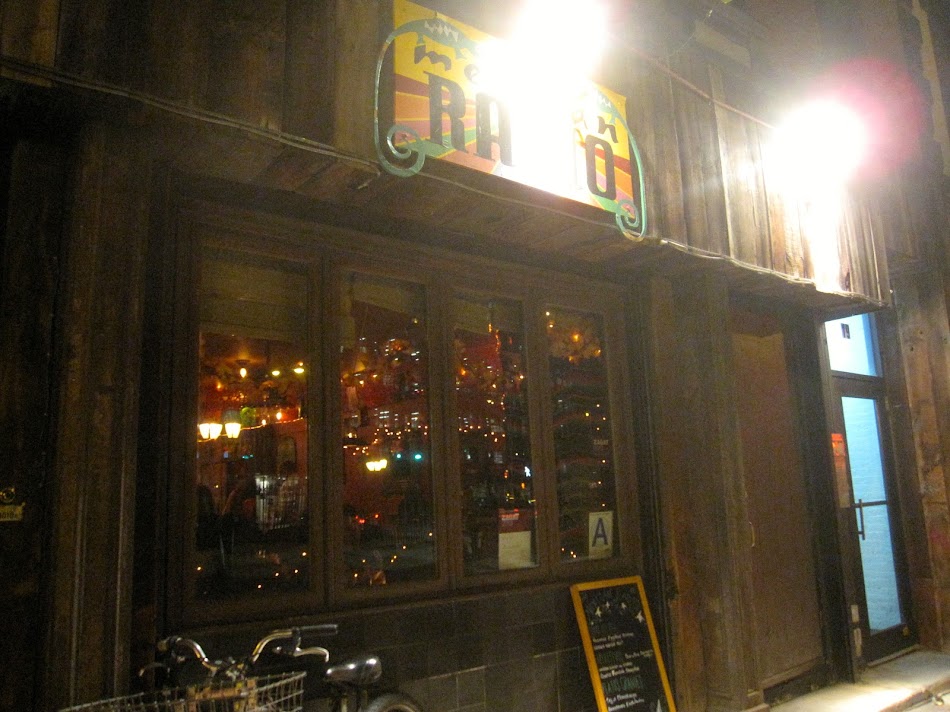 Mexican Radio is pretty unassuming for the outside, and given all of the other restaurant choices in Soho, maybe not a place you would just wander into.

Inside, the decor is gorgeous. We wound up being seated in the downstairs dining room. When you come down the stairs and reach the landing you are greeted by this display of candles which looked like candles you'd see in a church. 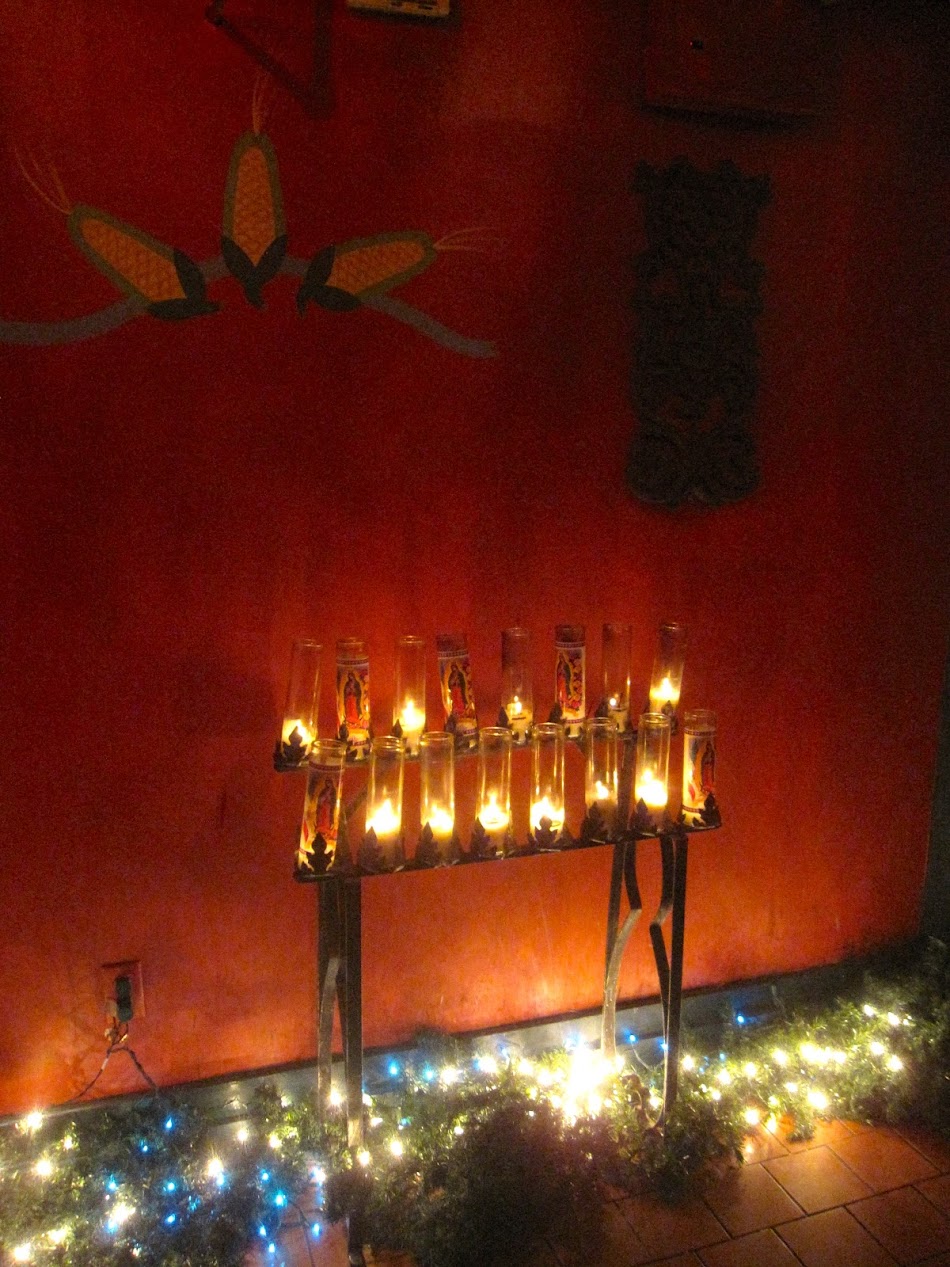 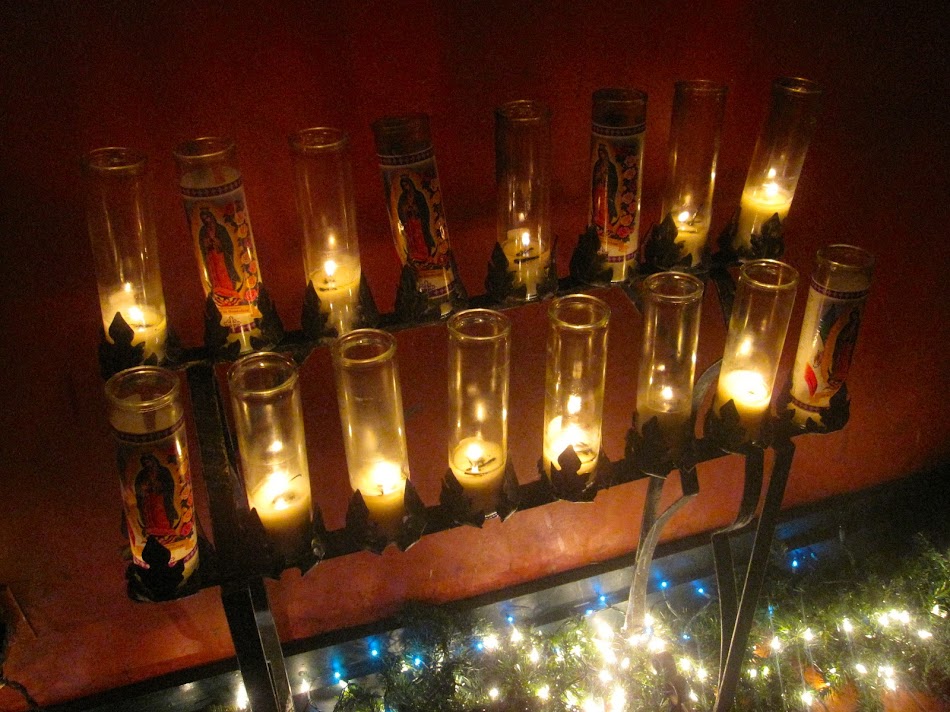 The dining room ceiling was decorated with zig zags of lights and flags. 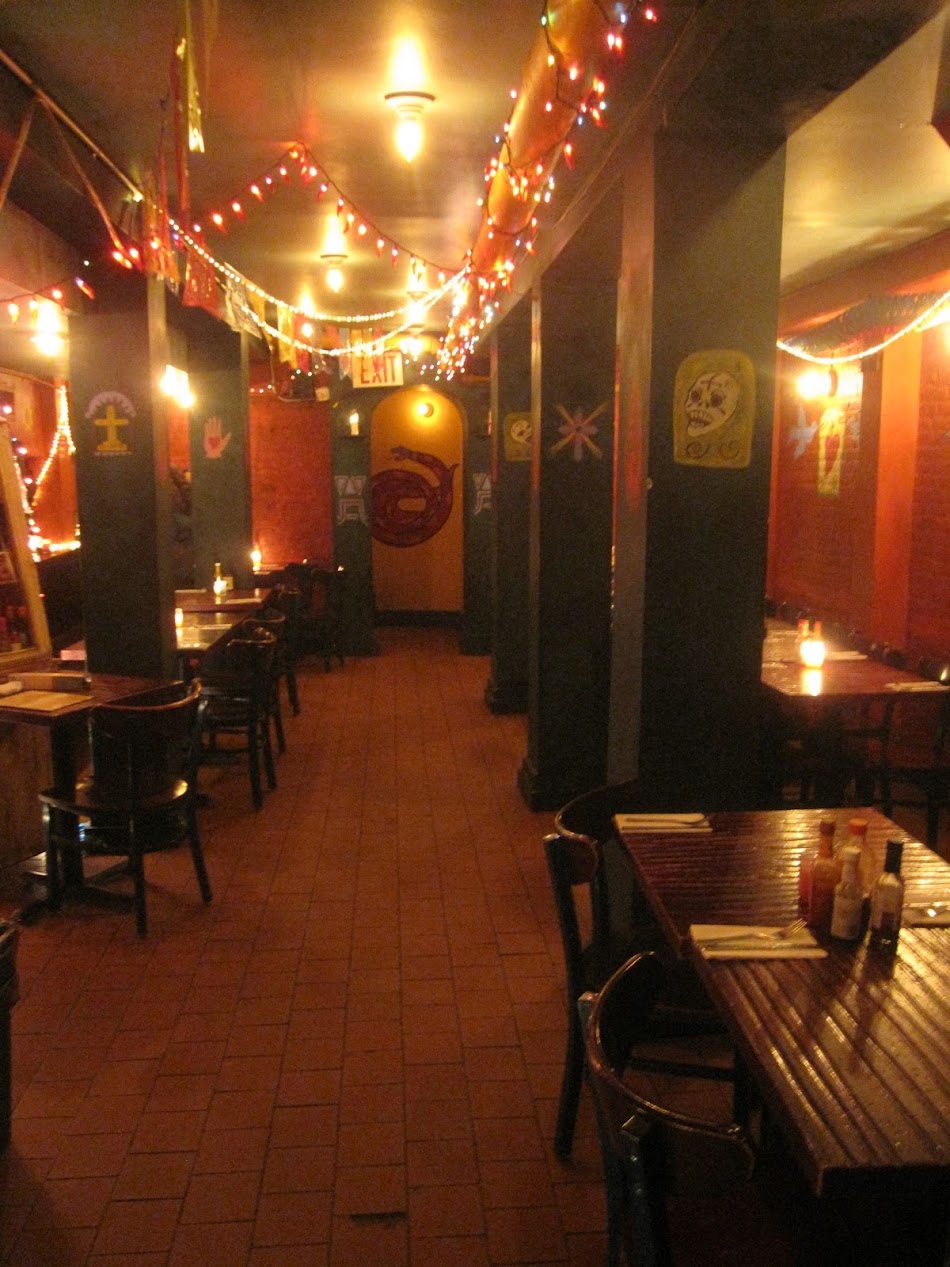 The walls were painted red and accented with brightly colored shapes and Mexico-themed decor. 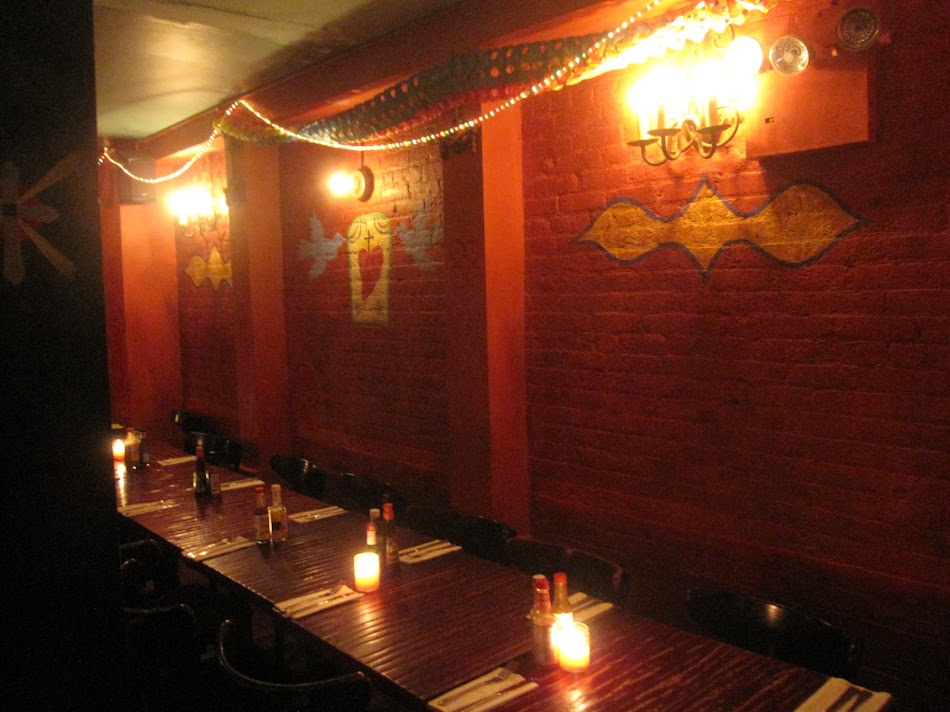 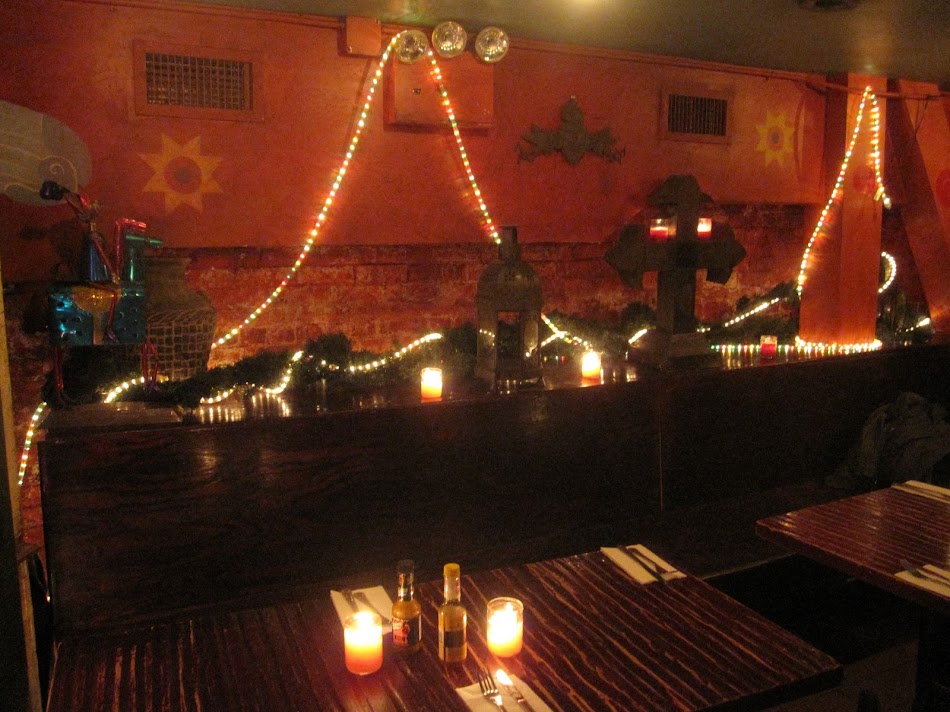 The dinner menu offers a multitude of excellent choices. I was thrilled to see an entire category labeled, "Veggie Friendly." There was even a list titled, "Vegan Friendly." Now that is rare! 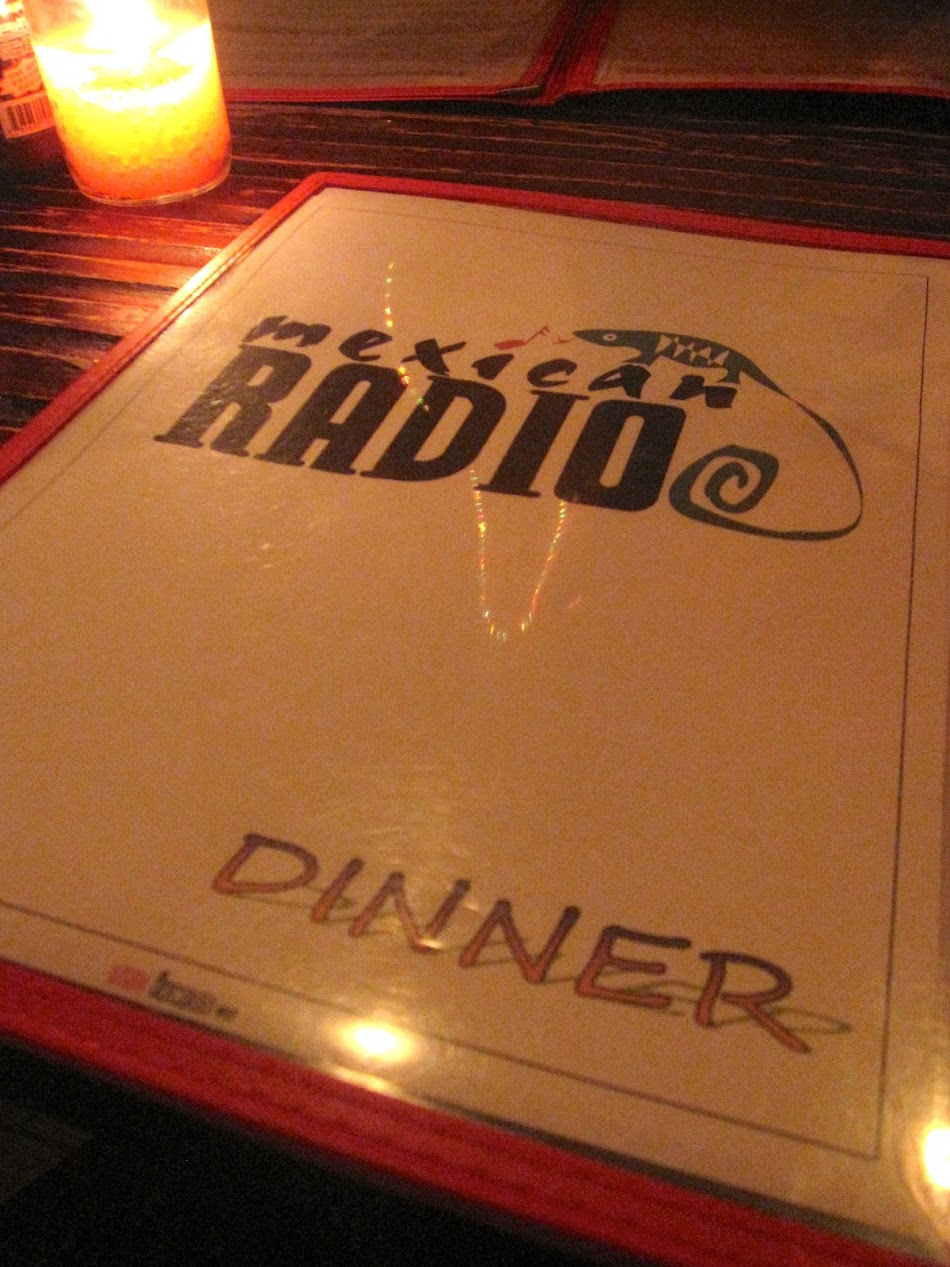 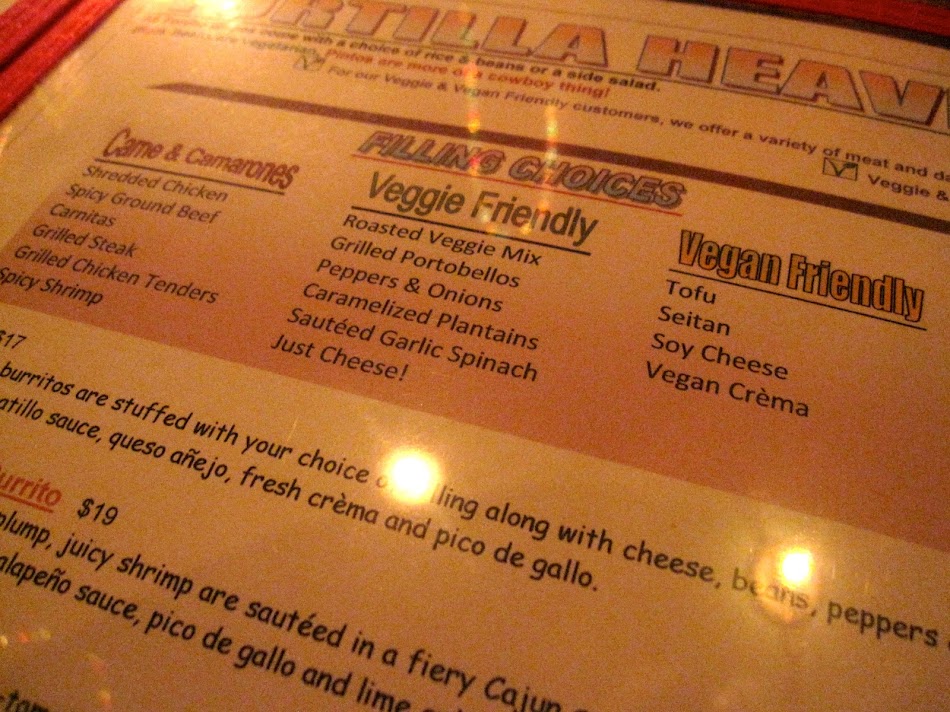 I went in thinking I wanted a margarita, but we wound up sharing a giant pitcher of red wine sangria. Our waitress returned throughout the night to refill our glasses. 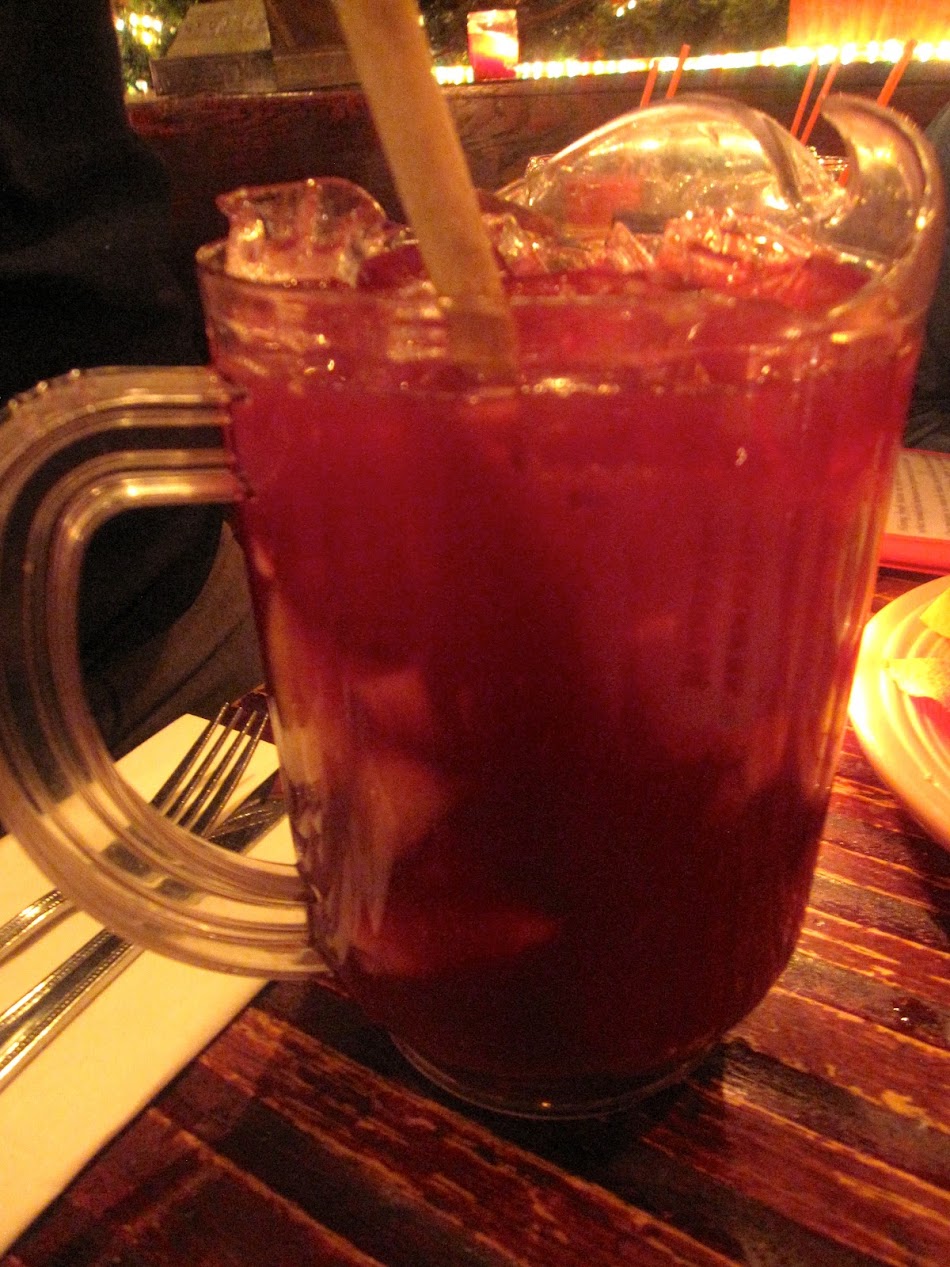 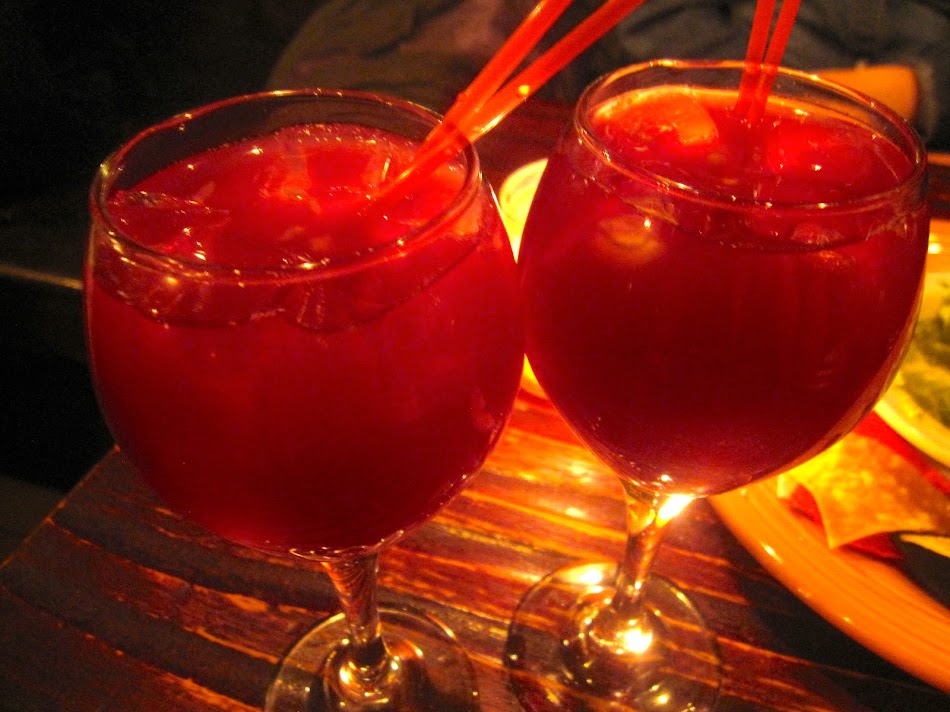 We ordered an appetizer to nibble on and of course selected the chips and guacamole. For a Mexican restaurant, this felt like a very small portion of guac. We made it disappear in about two minutes. 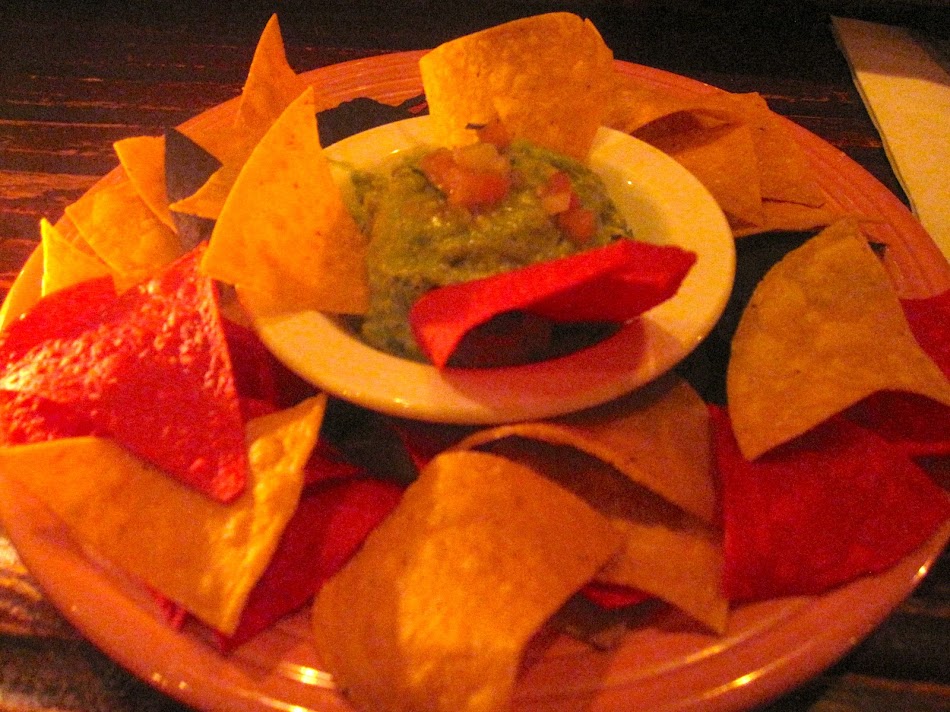 We were having a tough time narrowing down the dinner choices. We wanted pretty much everything! Our waitress was very opinionated and was strongly pushing us toward her favorite dishes.

One of my friends decided on the steak tacos. She said, "The steak was grilled and cooked really well, but for some reason there was too much moisture in the tacos and that caused the tortillas to rip, which made these very hard to eat!" 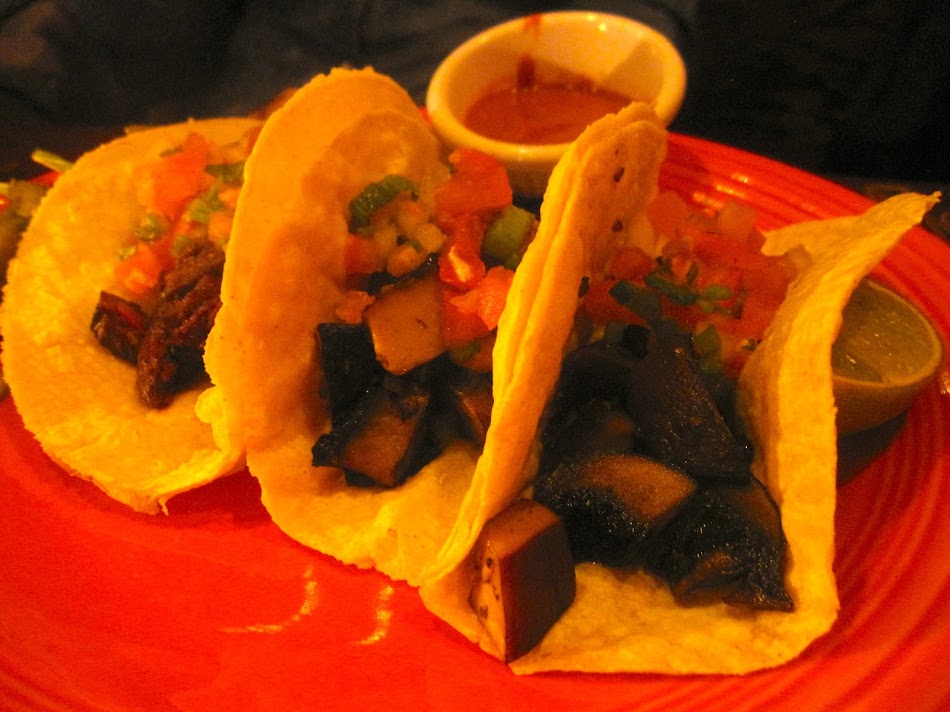 I shared two entrees with our other friend, the first of which was the veggie fajita. Our sizzling plate came with a generous portion of grilled tofu and vegetables. We were also treated to an entire plate of fixings - guacamole, sour cream, salsa and shredded cheese. Isn't the most fun part of fajitas assembling them? 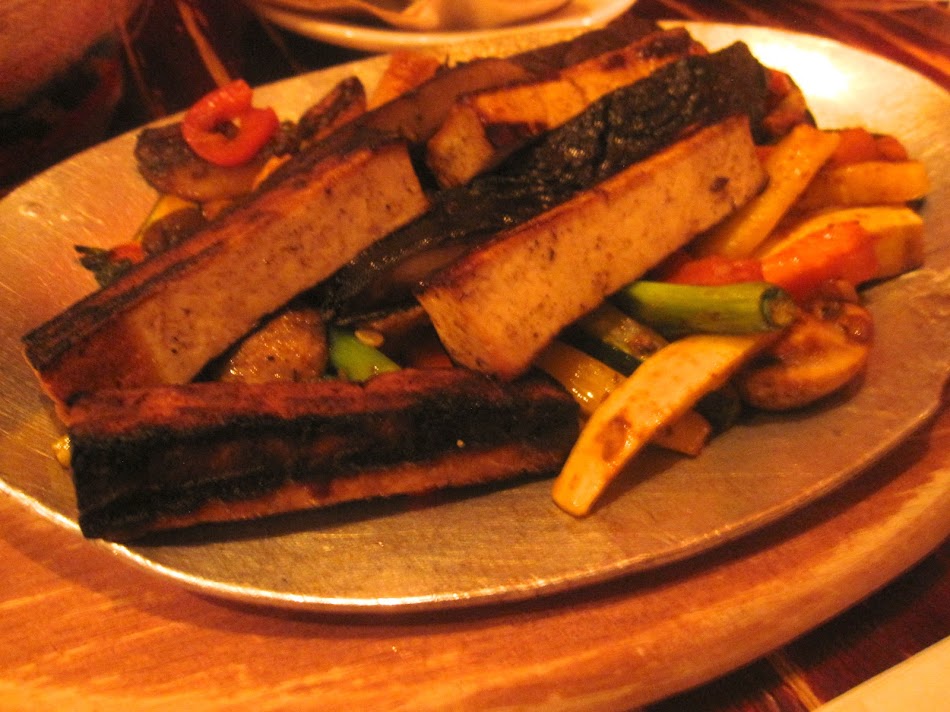 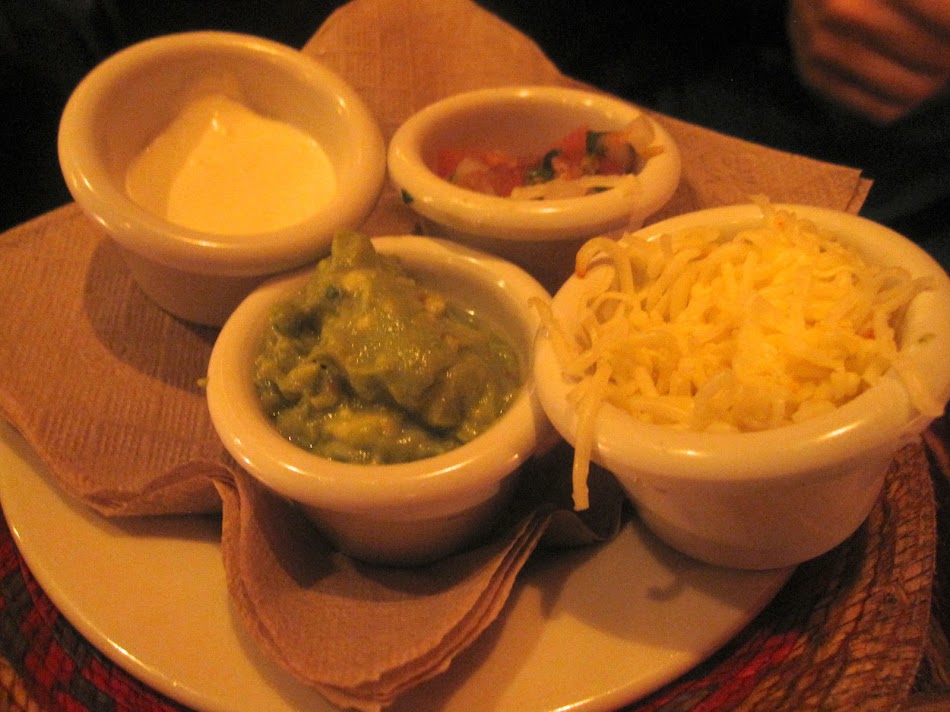 We also split one of the dinner specials which was the most strongly recommended menu item by our waitress. It was the mushroom and spinach enchilada. I have to admit, she was right! The enchilada was coated in a delicious sauce and then topped with extra cheese. Every bite was piping hot and super creamy. 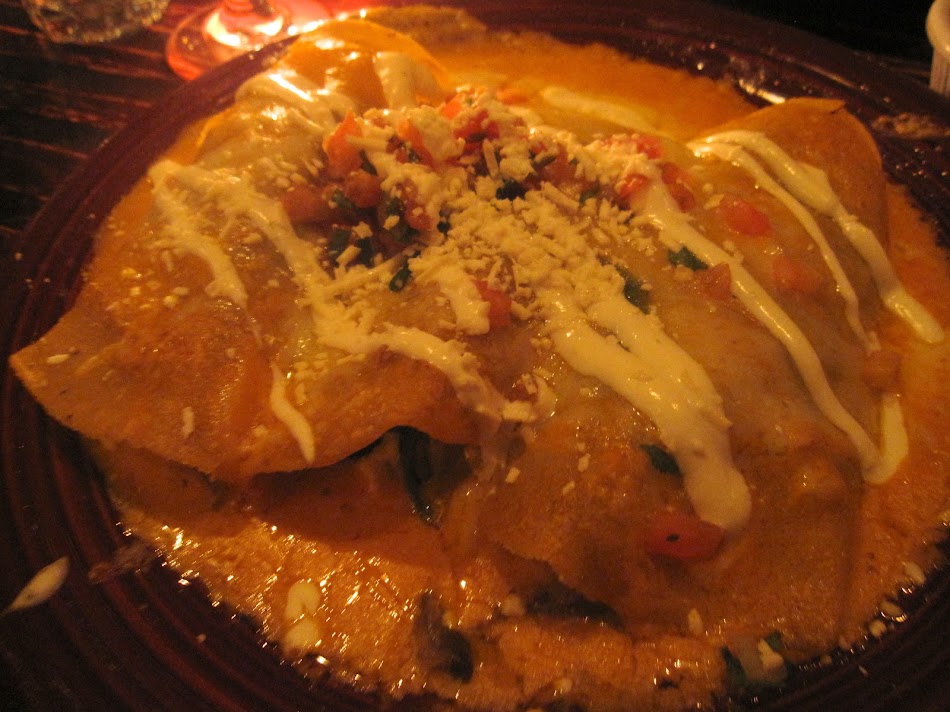 Each of us received a side plate of rice and black beans. I normally don't waste stomach room on these, but the Mexican Radio rendition was pretty yummy. 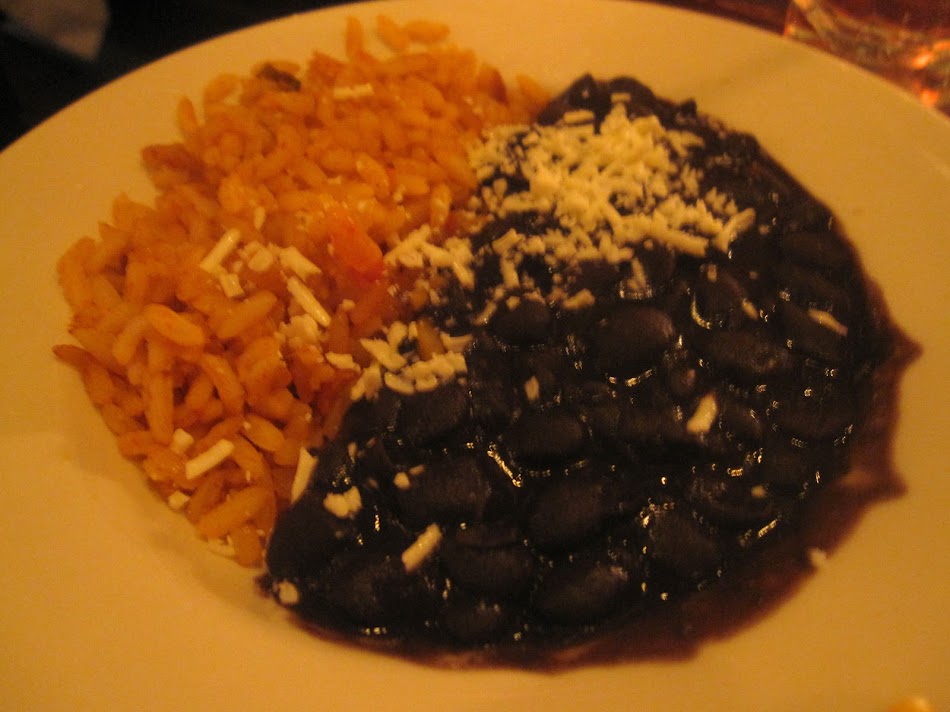 Just as we were discussing the need to be rolled out of the restaurant, our waitress brought over a plate we hadn't ordered. She said, "Since this is your first time eating here, I wanted to be sure you experienced our house made tres leches cake. Please enjoy." How nice! 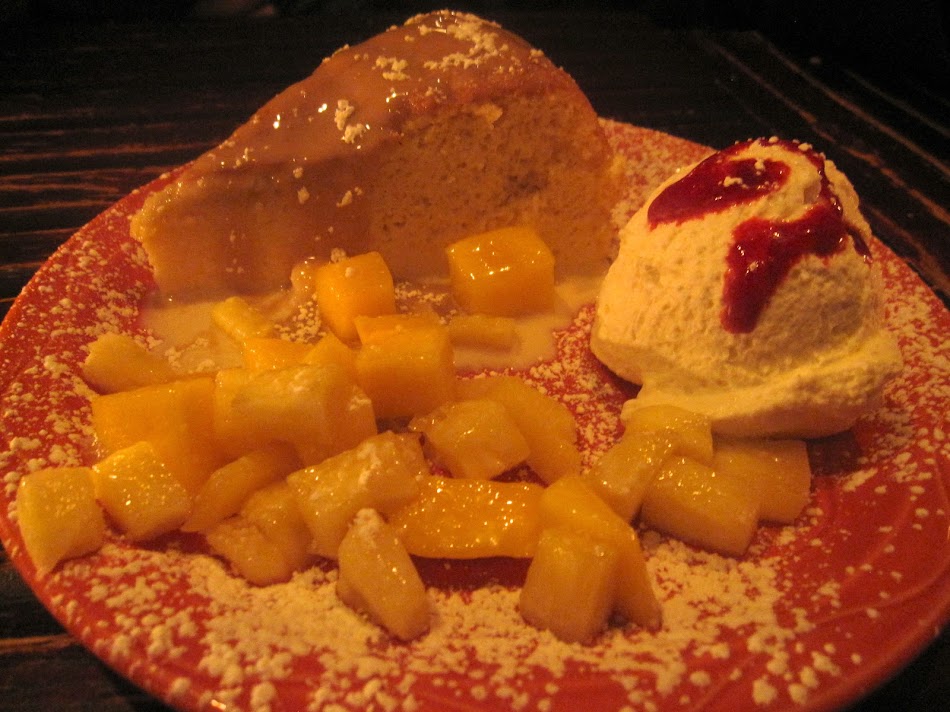 The tres leches cake was incredibly rich and served with fresh whipped cream, raspberry sauce and chopped pineapple. The whipped cream was amazing! I would just eat that plain.

While we were enjoying our dessert a birthday party of 15 twenty-something guys took the table right behind us. We were in complete shock that out of 15 guys, not a single one of them had a wife, fiance or girlfriend who tried to crash the party. As they started giving toasts it became very clear. Let's just say, women of New York - beware.

Despite overhearing some unsavory birthday toasts, our experience at Mexican Radio was a great one. The restaurant has a fun vibe, our waitress was very knowledgable about the menu and she recommended an awesome special. We also really appreciated our complimentary dessert.

Do you have a favorite Mexican restaurant in New York City? 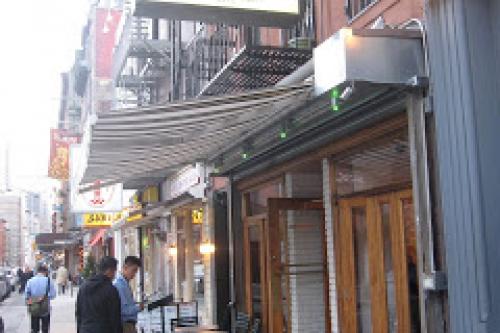 When I was in New York City back in April, my coworkers and I spent an afternoon bopping around Soho. In between lusting after jackets at H&M and trying on more shoes than I can count, I managed to spot an adorable restaurant! This particular day in April was one of those rare, sunny, 90 degree days and all of the Soho restaurants and bars had their windows open. We were walking on Lafayette Street when I spotted a place called Jack's Wife Freda. 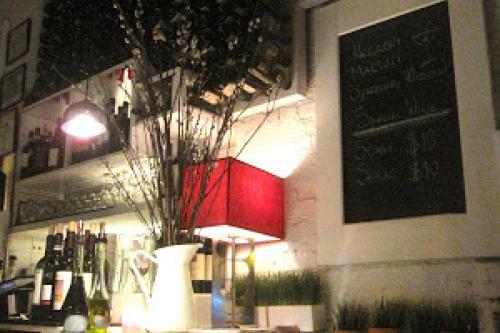 On my third night of my New York trip I met one of my favorite girls for dinner. The last time I was in the city she picked a fantastic place for our dinner, Tortaria, so I asked her to choose our meet up location for this visit as well. Her recommendation was a placed in Soho called Bread. I made my way to Spring Street and I actually noticed the restaurant's delivery bike before I found the front door! 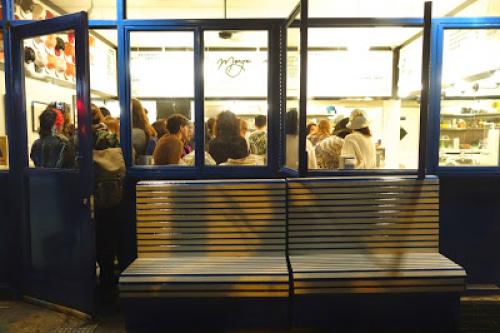 Yesterday I shared with you my trip to NYC's The Meatball Shop. You may have noticed that we didn't order any dessert with our dinner. That's because from the very beginning we had planned the evening as a two stop tour. Stop one: The Meatball Shop. Stop two: Morgenstern's. I heard about Morgenstern's from a Boston friend who had visited New York a few weeks prior. She told me it was wildly popular and that the flavor combinations were very unique.