One of the things I look forward to most about traveling to New York City is making restaurant discoveries. I read about all the new places opening in NY Mag, the New York Times and on Grub Street, but sometimes you just stumble upon a place - literally.

I was walking to my company's New York office and texting (yes, guilty of walking while texting) and when I finally stopped and looked up, what was in front of me? The adorable Piccolo Cafe. 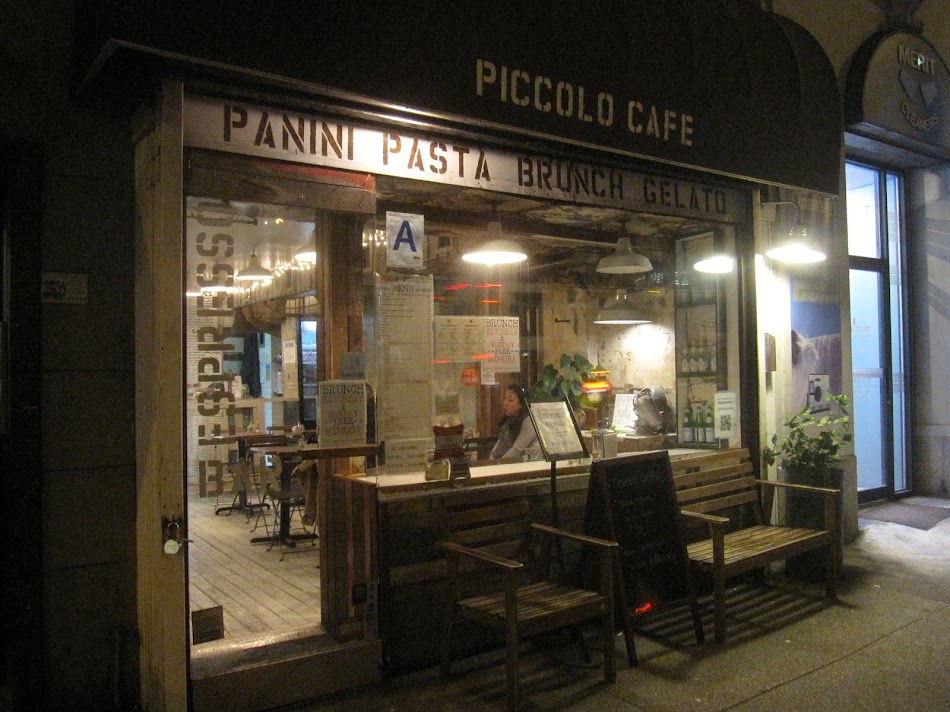 It was not even breakfast time when I spotted it, so I wrote down the address in my phone and decided to try and come back for dinner.

Piccolo has four locations, but the one I found was on Madison Avenue between 37th and 38th Street.

When you walk into Piccolo Cafe, the first thing you notice is the charming decor. The color palette is simple but every single touch is thoughtful. 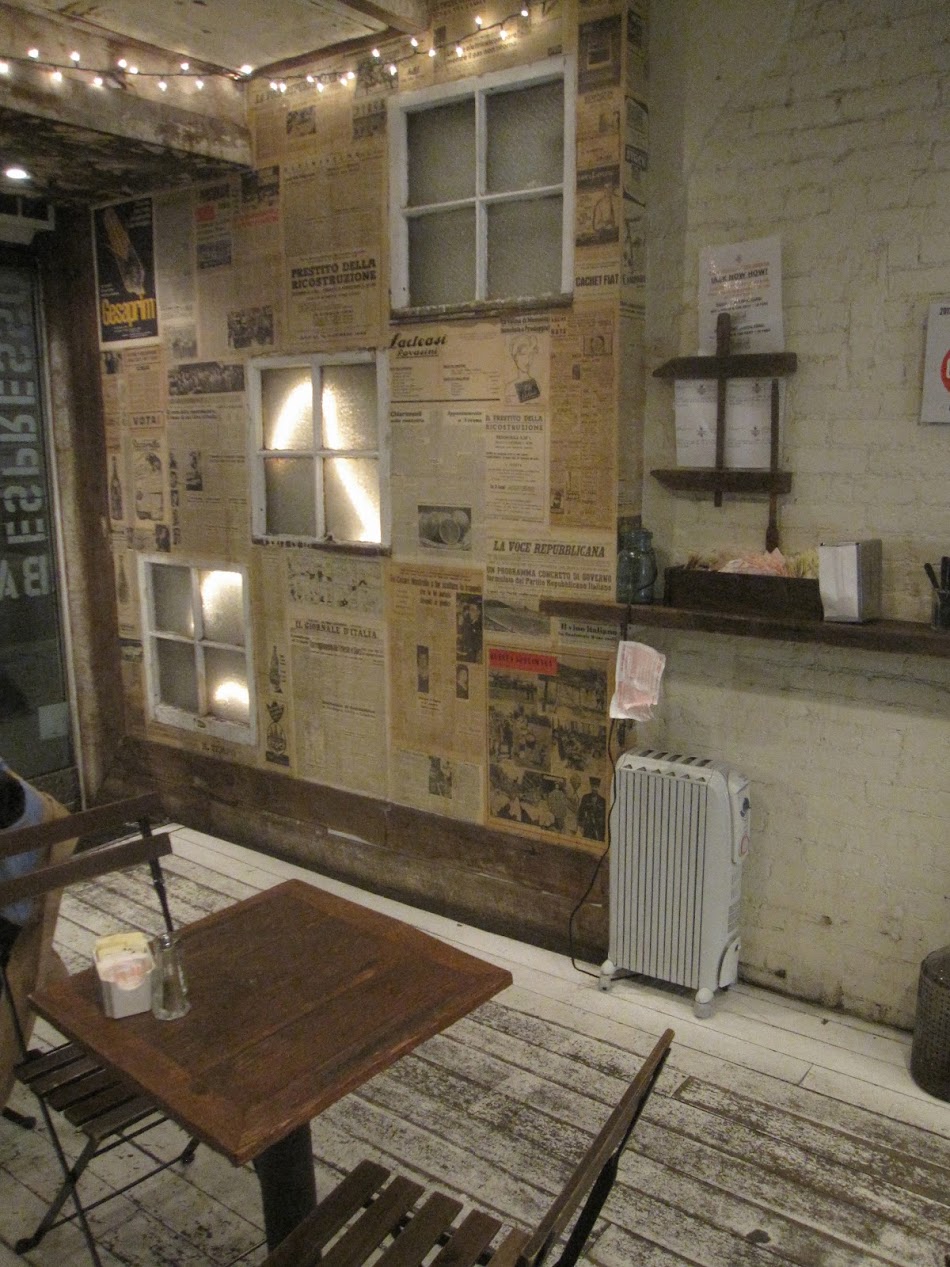 I loved the use of newspaper for wallpaper and the faux windows in a Connect Four formation. 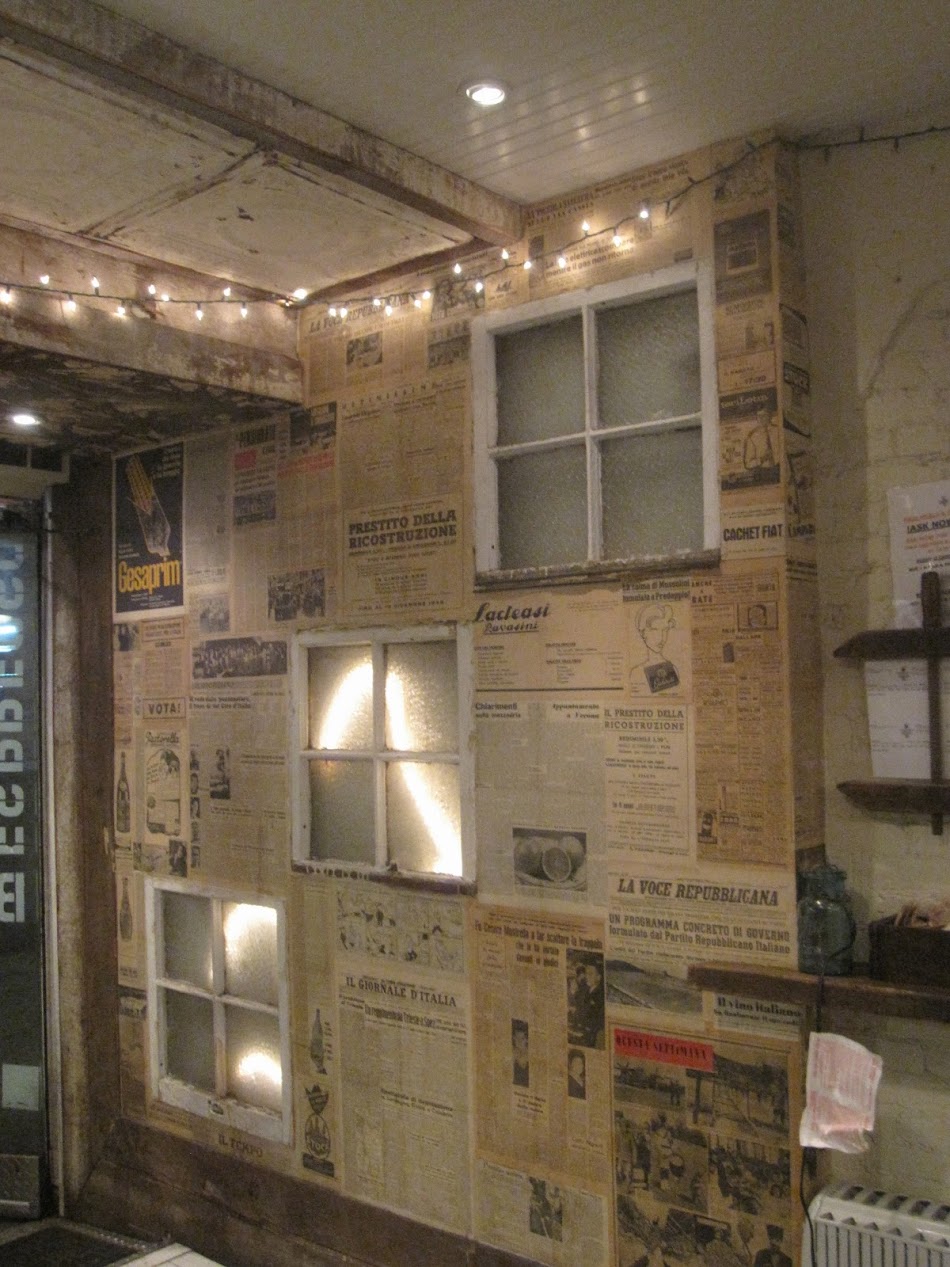 You order your food at the counter which is adorned with twinkle lights. 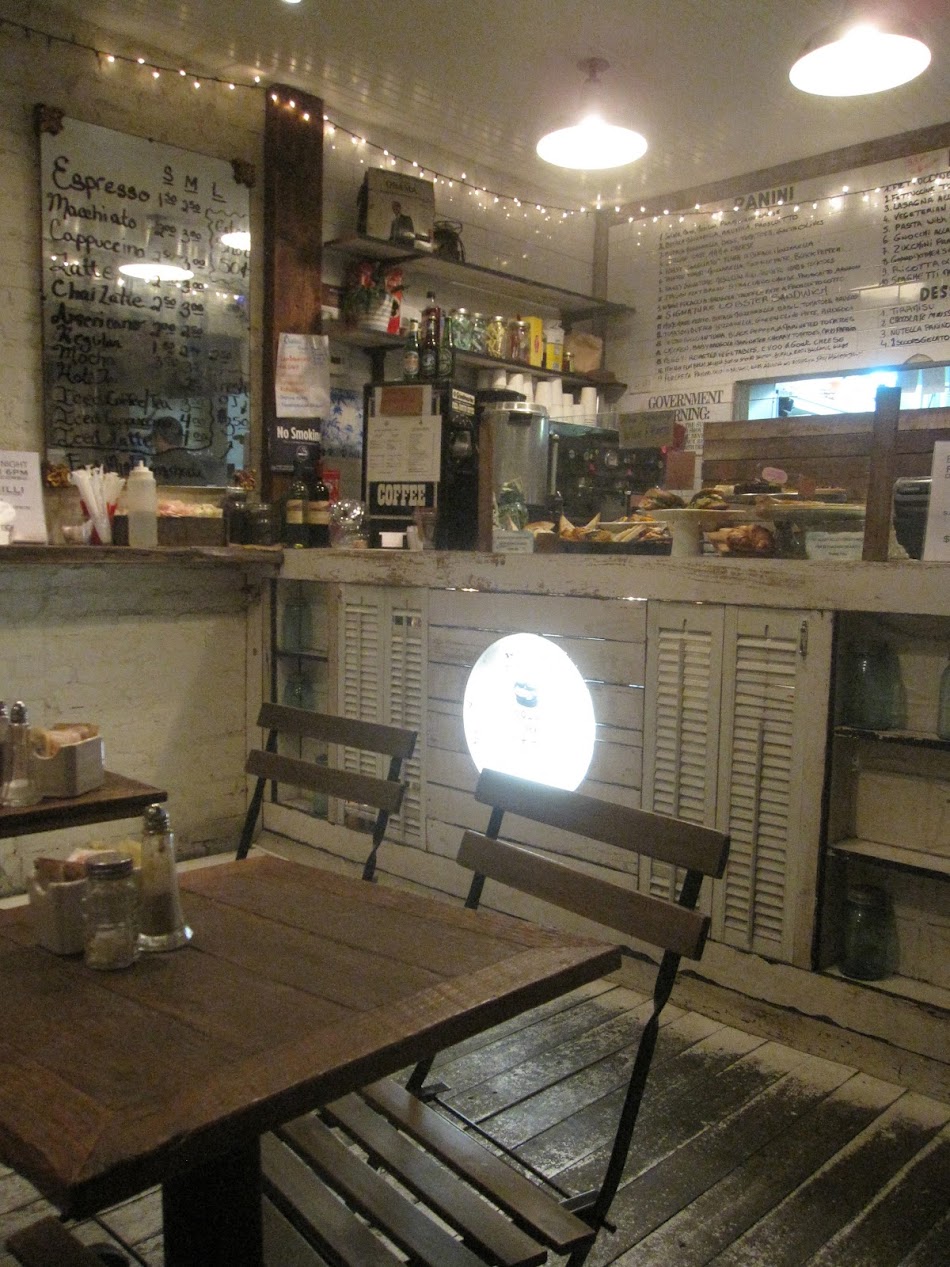 The menu is written right on the white wall behind the counter. For those of you with bad eyesight, good luck! 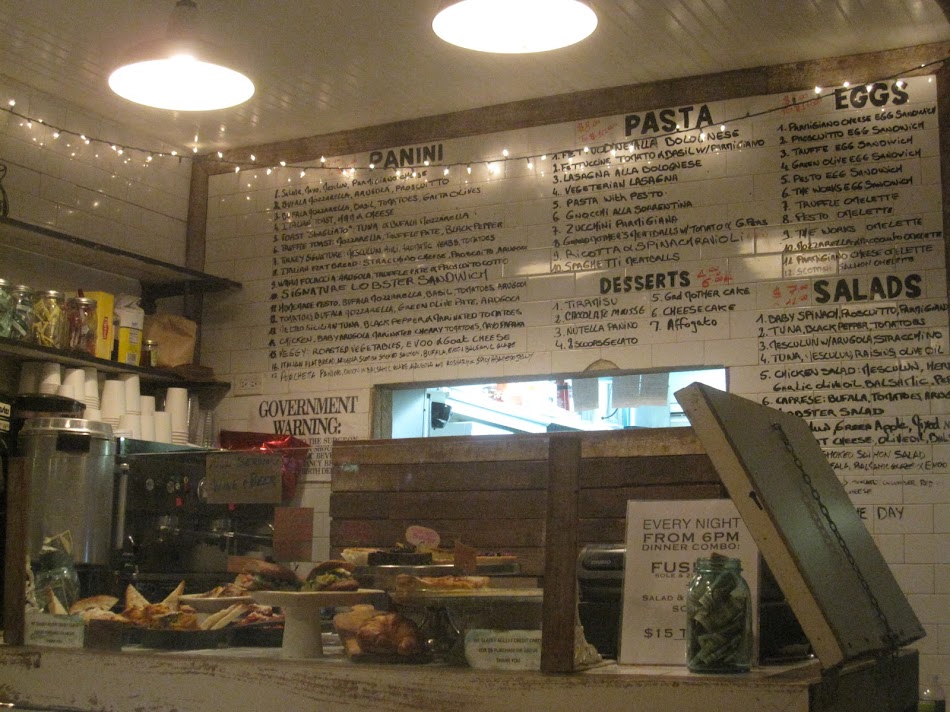 Many of the menu offerings are right behind the glass on the counter, helping you to make your decisions. 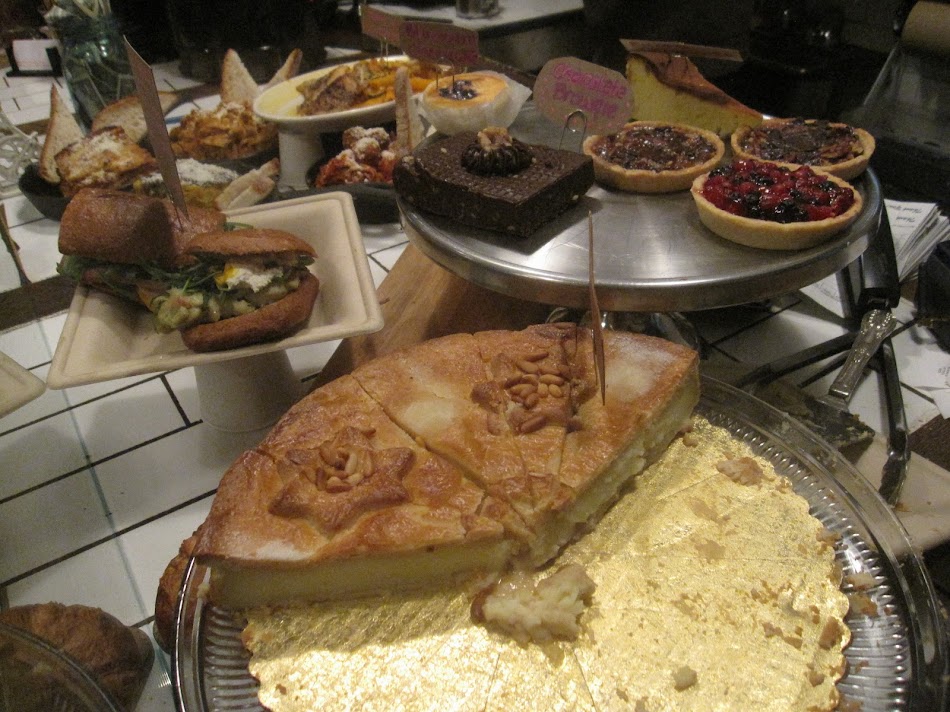 The hot beverage menu was scrawled in beautiful handwriting on a mirror next to the counter. I love this idea! 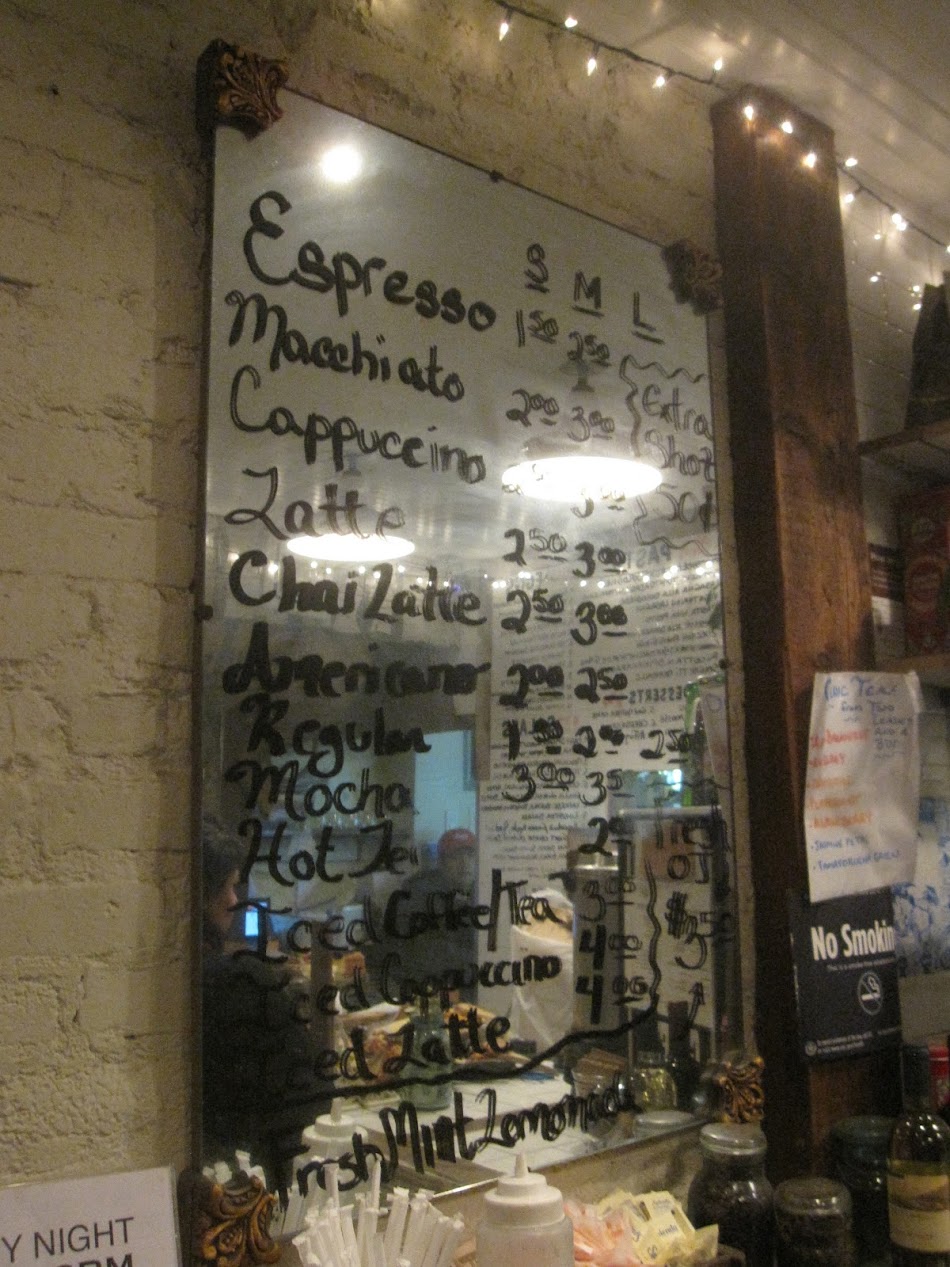 I was obsessed with the restaurant's illuminated logo, but my camera refused to take a great photo of it! My apologies. This is the best I could do. 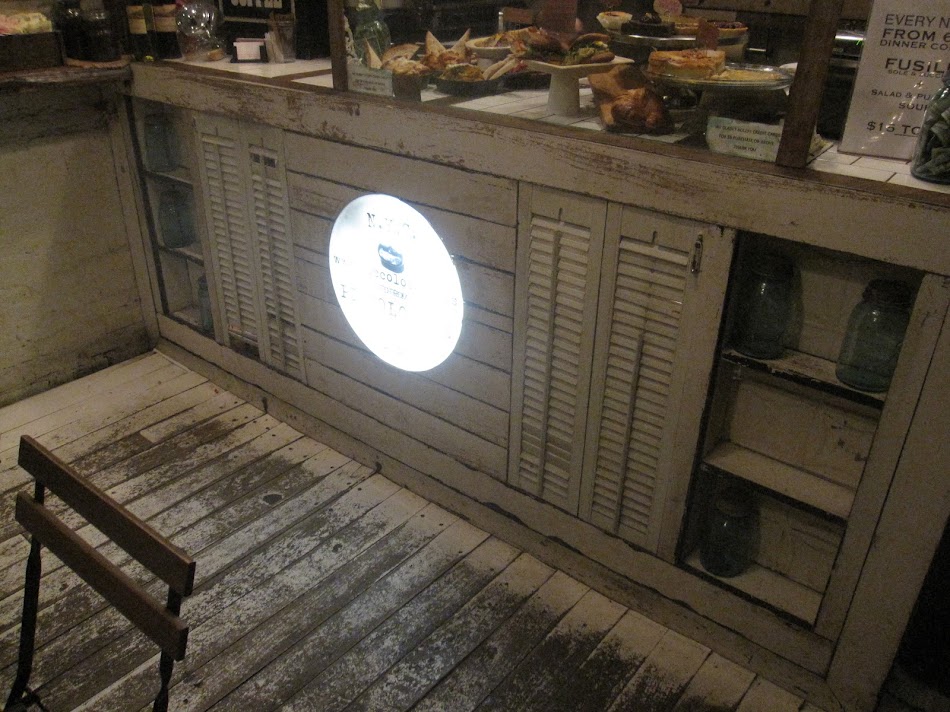 How cute are the shutters and the mason jars flanking the lit up logo?

The restaurant has three rows of cafe tables which felt very European. 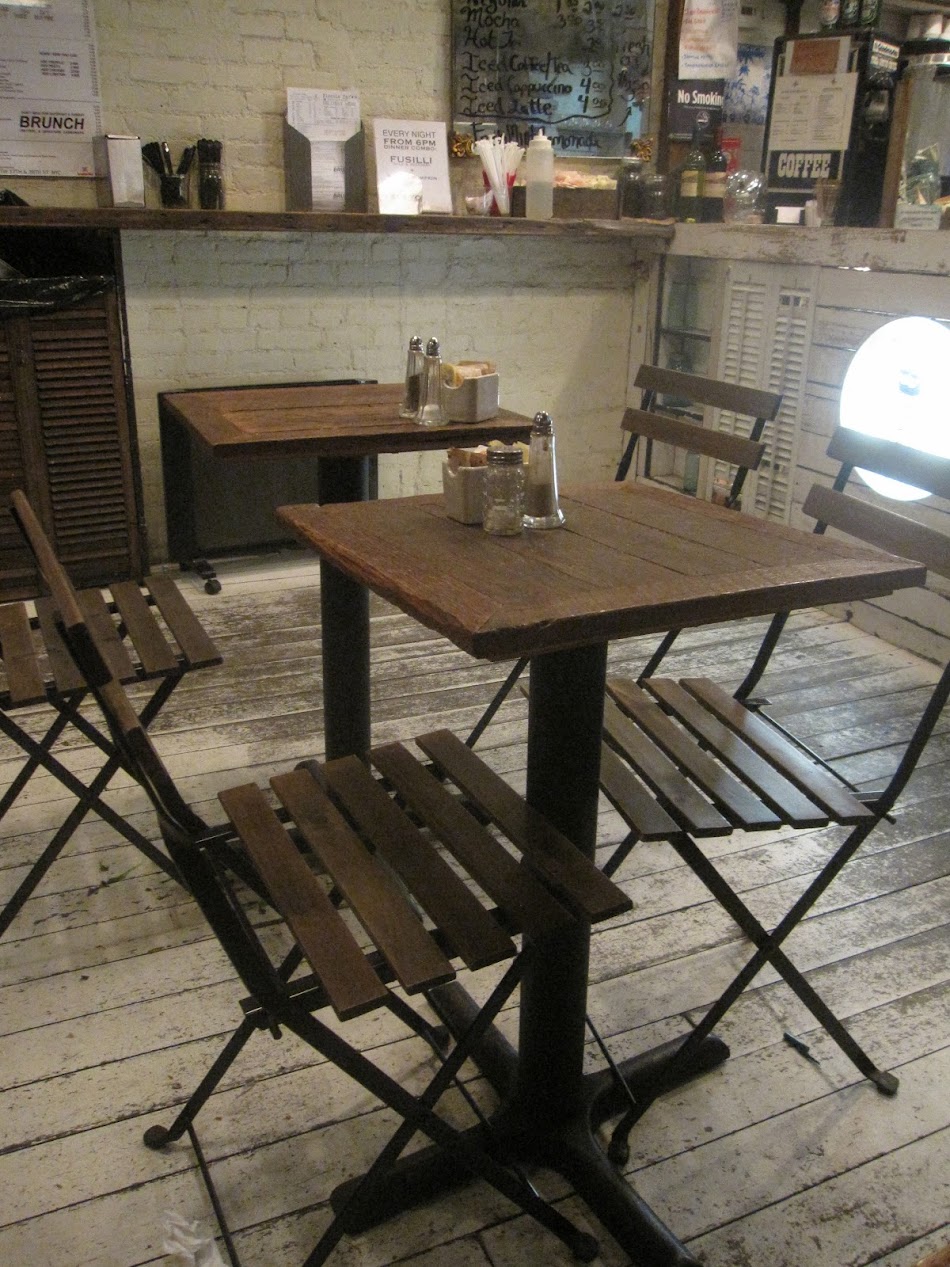 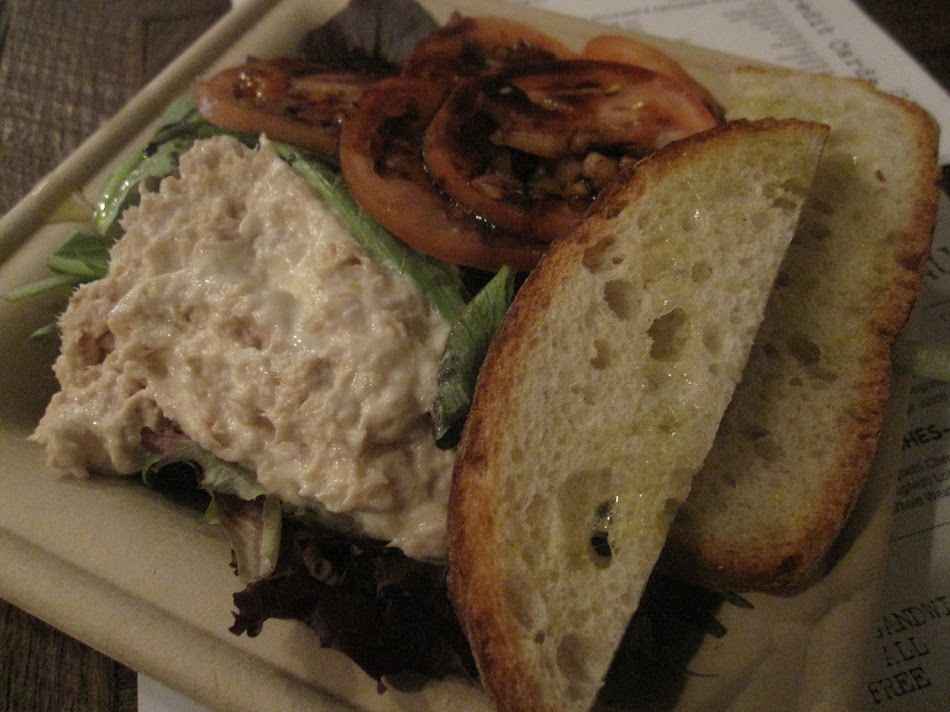 I wanted the zucchini parmesan, but they were sold out! I was so disappointed. How good does that sound?

The very handsome man working the counter recommended the fettuccine with tomato sauce as a second choice, so I went with it. 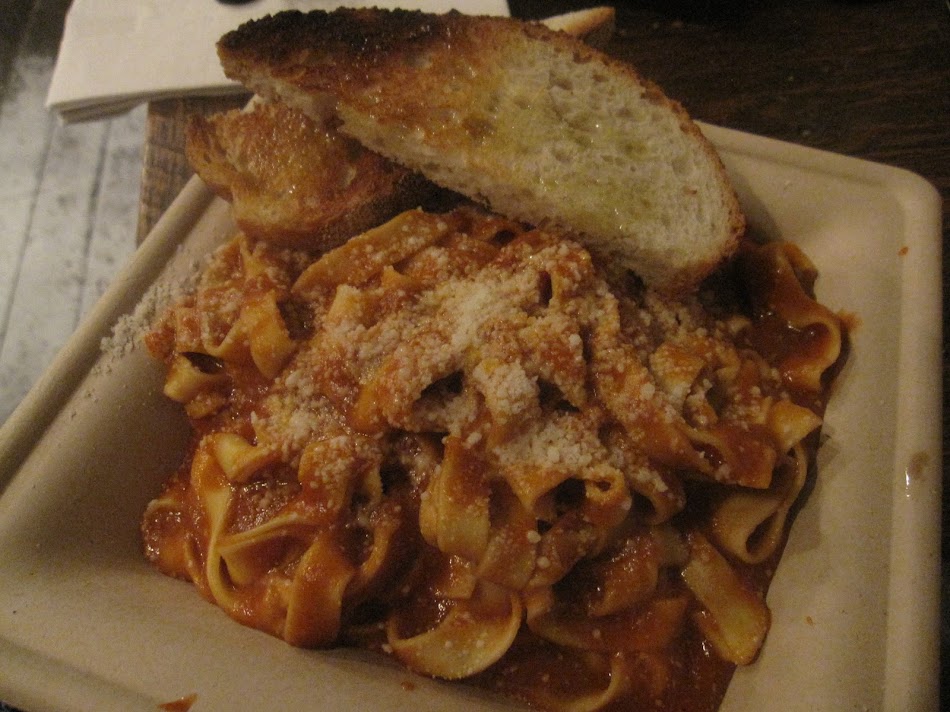 The pasta was delicious and the portion size was perfect. I used my pieces of toasted bread to soak up the extra tomato sauce.

One of the reasons I wanted to try Piccolo Cafe is because they advertised that they have gelato. Need I say more?

The night we went the flavors were vanilla or coffee. We both decided to get the coffee which came in a dish about the size of a Dixie cup. 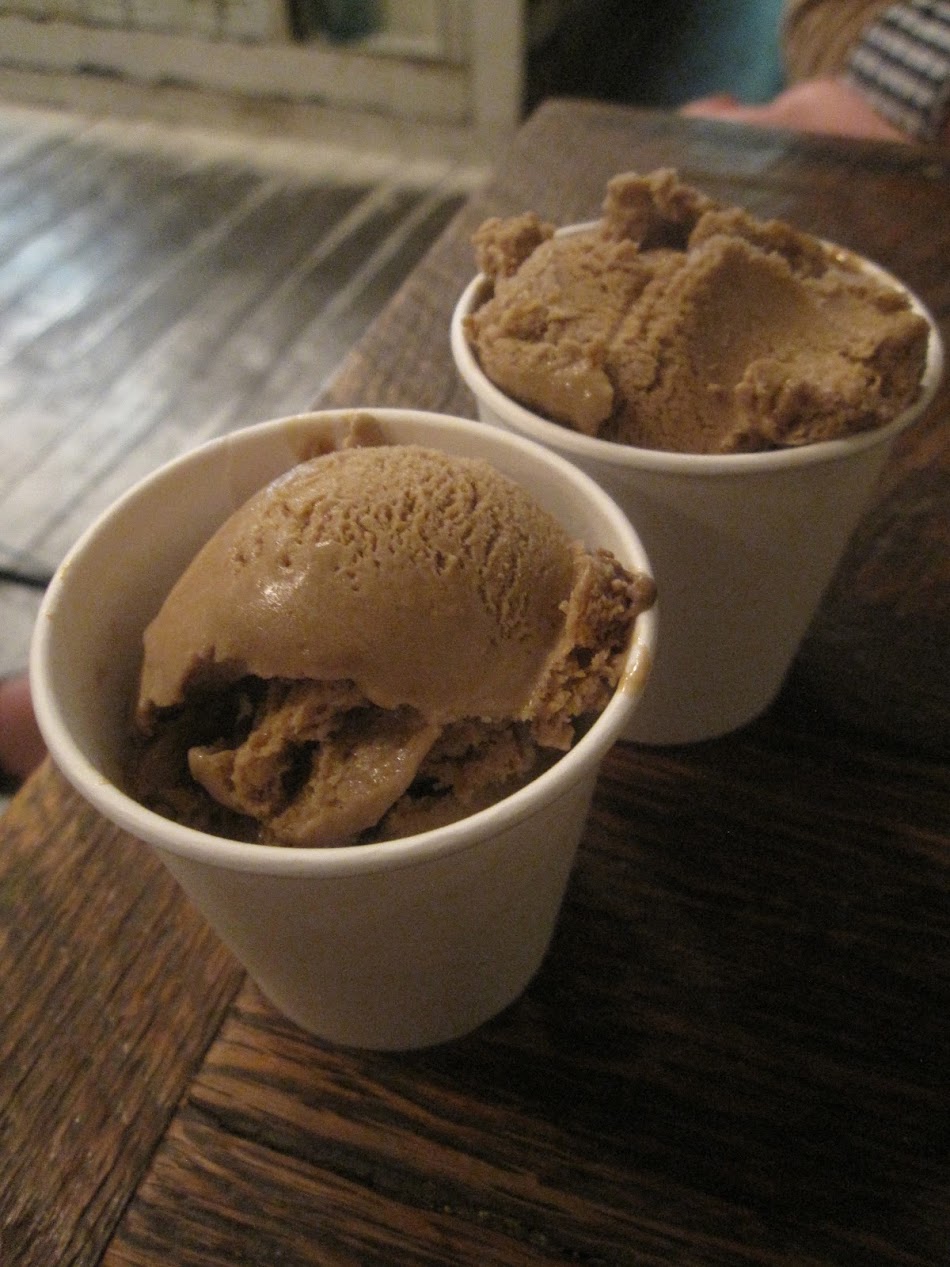 The gelato was creamy and the coffee flavor was subtle, but satisfying.

Thought we sat in the main dining area, there are also highly coveted seats in the front picture window. Naturally they weren't vacated until we were ready to leave. 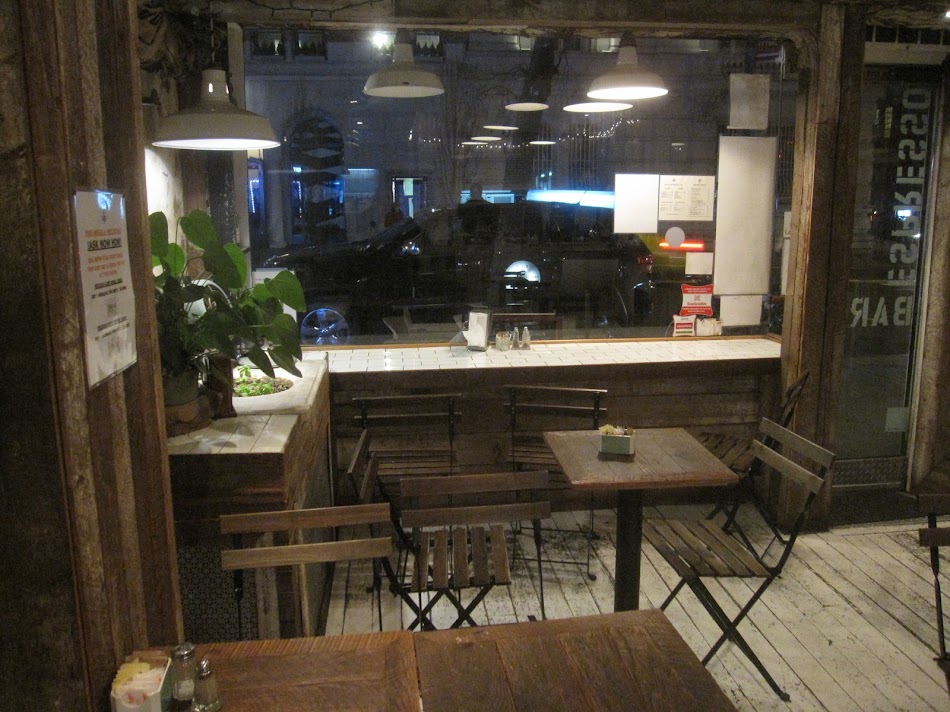 Other than the handsome counter man, the best part of dining at Piccolo Cafe was that both our entrees plus our two gelatos came to a grand total of $20 dollars! That is unheard of in New York City. Piccolo is definitely a hidden gem.

Have you made any fun discoveries while walking in a new city?

I cant believe how inexpensive! and another cozy and adorable looking spot.

Great tips and very easy to understand. This will definitely be very useful for me when I get a chance to start my blog. voyance audiotel en ligne 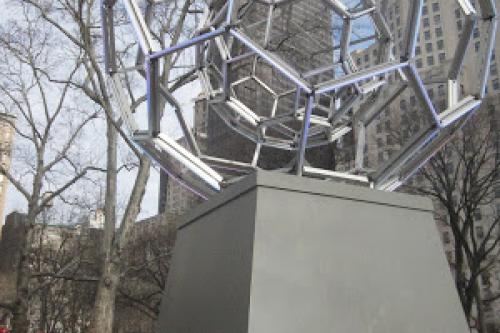 The final three days of my New York City trip I stayed with one of my best childhood friends. She is one of my most loyal blog readers and she takes great pride in planning our dining out spots when I stay with her. The first spot she picked for us was called Tommy Lasagna. She had gone the weekend before with her parents and loved it so much that she resolved to take me back. Tommy Lasagna is located just outside of Union Square on 18th Street. 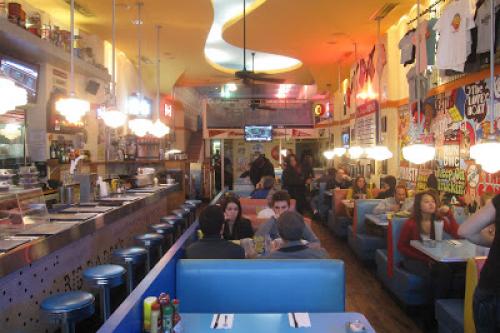 On the last day of my recent New York City trip I chowed down at Big Daddy's Diner in Union Square. 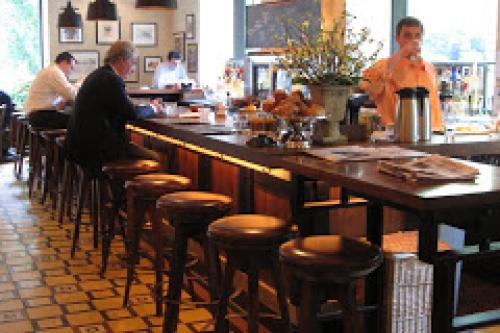 While in New York City for work last week I was able to take a late night break from work to meet a college friend for a drink.