For the last year or so I'd been reading non stop about the ways in which chef Brian Poe had transformed the restaurant and bar called the Rattlesnake. I'd been there once for a friend's 21st birthday party the summer before my senior year in college and I had no desire to return. I did however, want to taste this exceptional food from chef Brian I'd been hearing so much about.

Well, the dining out gods answered my prayers and chef Brian Poe decided to open a new, solo venture - the Tip Tap Room. The restaurant gets its name from the two main focuses of the menu - tips (as in steak, turkey, lamb, etc.) and taps (beer). Two items that go extremely well together if you ask me.

The Tip Tap Room is located on Cambridge Street between Government Center and Beacon Hill. I walked there after work and it only took me about six minutes.

The outside of the restaurant is gray with big windows open to the street and the sign spray painted in black alongside the front door. 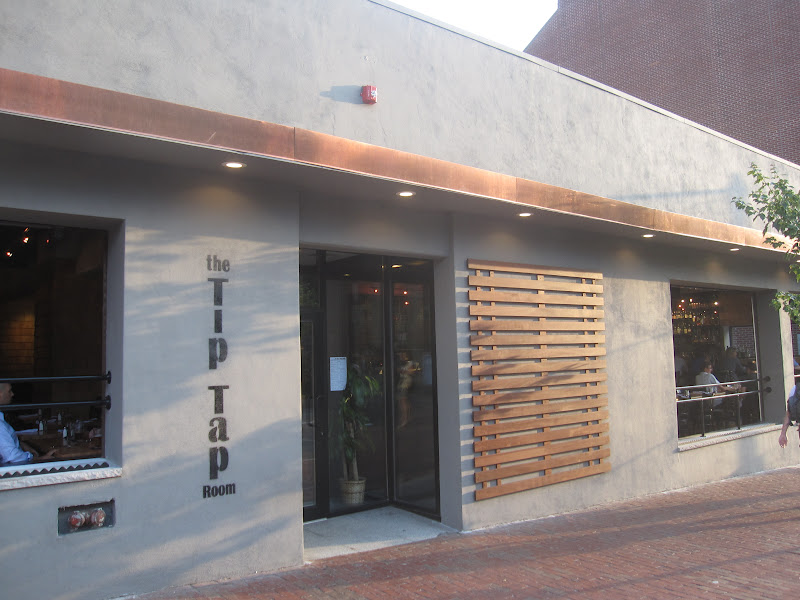 You enter the restaurant into the main dining room which has light colored wood shingles lining the walls. It's not often you see shingles inside a building! 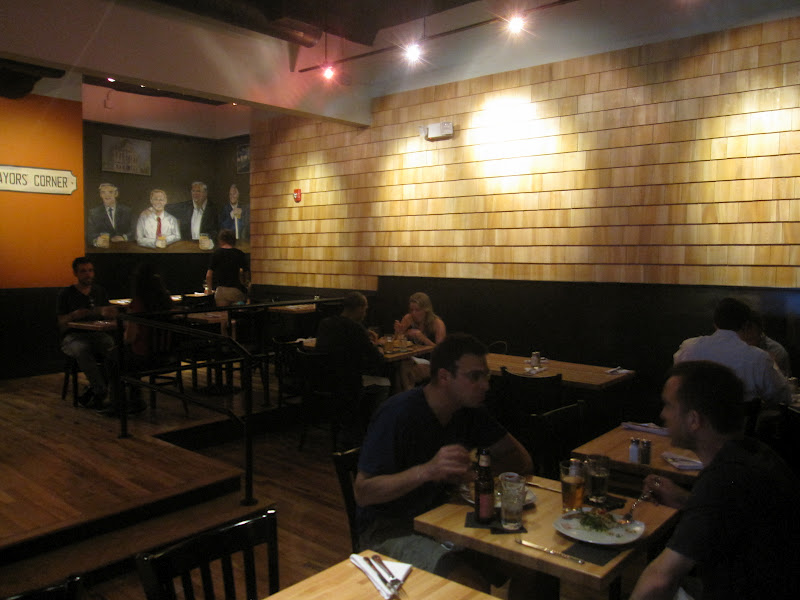 The hostess said we could choose any table we wanted, so we picked one right in the front windows (naturally). You know how I need to people watch! This was the view from my seat: 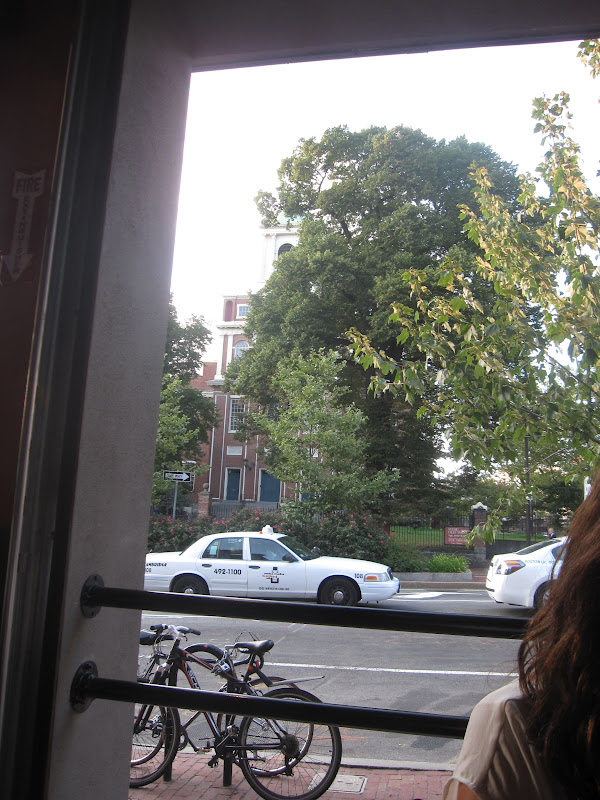 Behind us was the bar which has plenty of chairs for the post-work happy hour crowd. 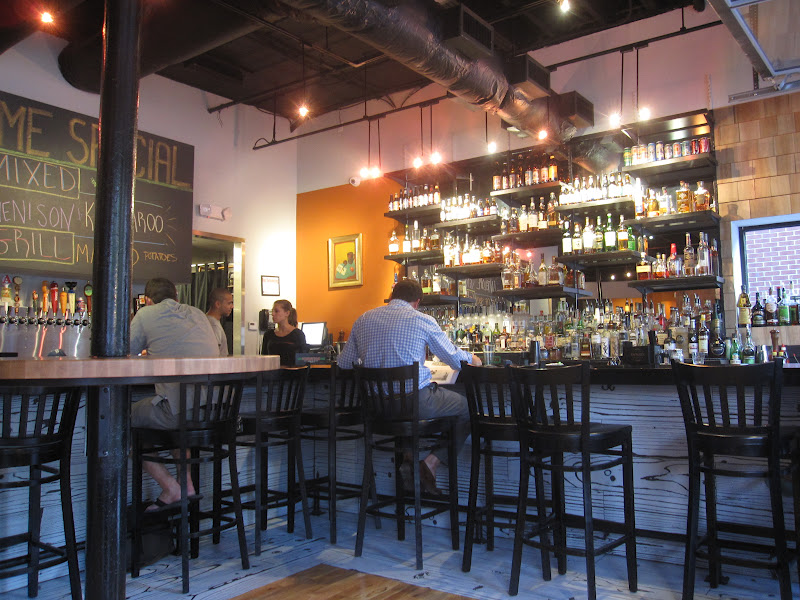 I love chalkboard menus and the Tip Tap Room has a great one! The chalkboard shouts the best items of the day in categories ranging from wild game to beer to dessert. The night we were there the wild game special was antelope, venison and kangaroo! 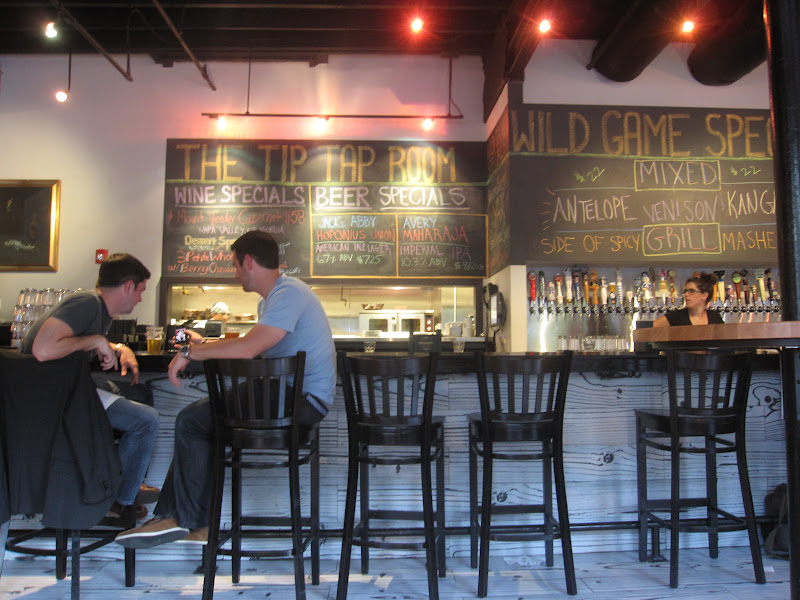 The food menu had so many great choices, but when you flipped it over, the beer menu was even more impressive! Check out that list of just the draft beers! 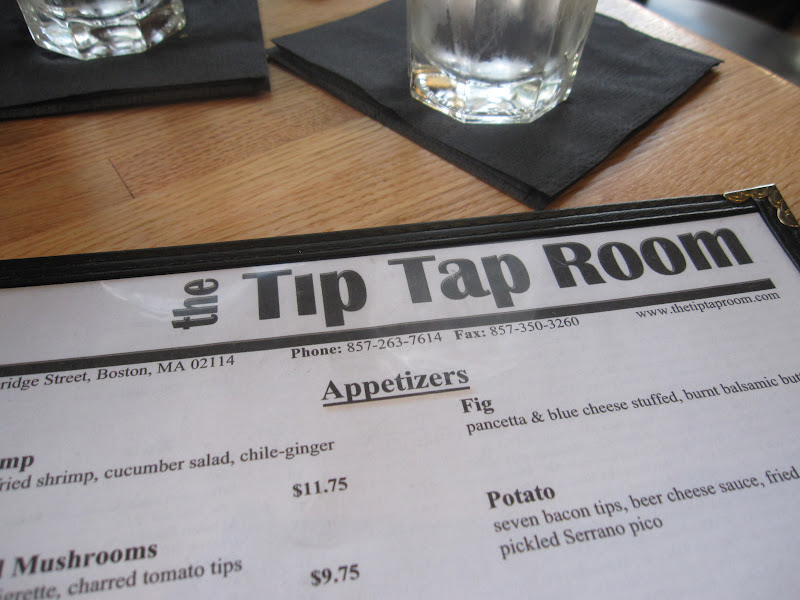 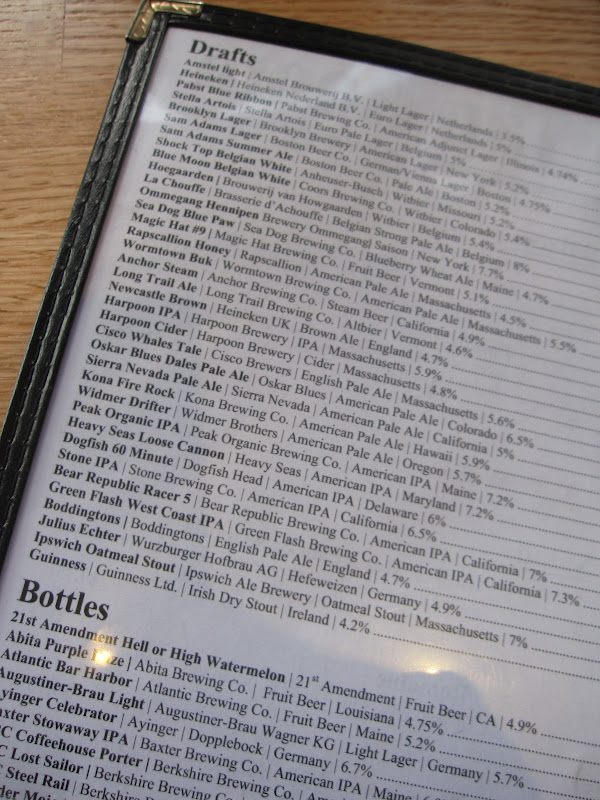 I'm not much of a beer drinker, so I ordered the Harpoon Cider. It was ice cold upon arrival which was perfect for that humid day. 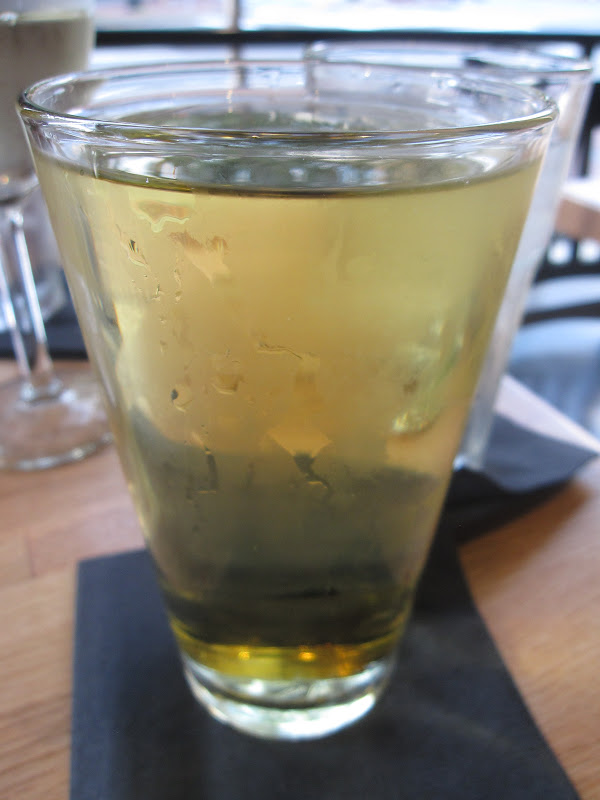 My dinner date ordered a glass of Sauvignon Blanc. They were out of the variety she wanted, but they had another which she commented, "is conveniently more expensive." 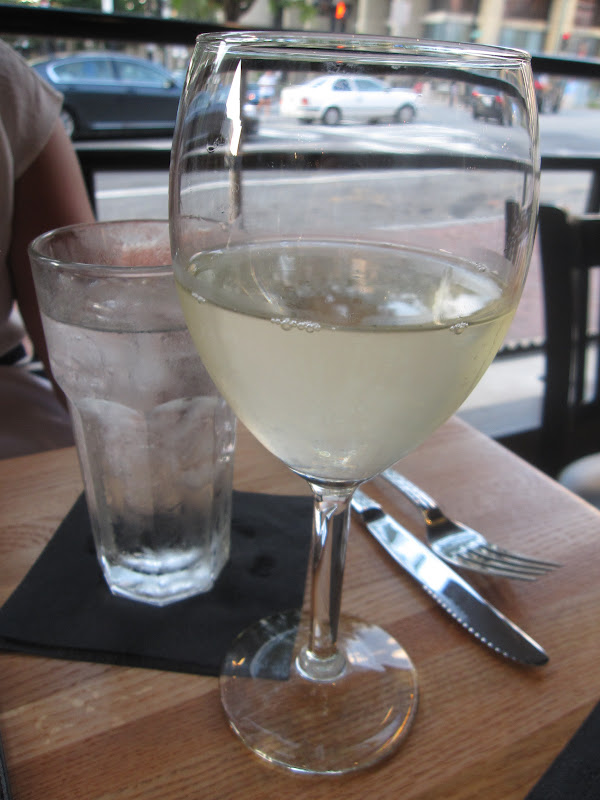 The first thing that jumped out at me on the dinner menu was the side of four mashed potatoes. I mean, how can you see that and not order it? The potatoes came in four white ramekins in the following flavors: goat cheese, olive tapenade, creamed corn and horseradish. My favorite was the olive tapenade. You still got that creamy, mashed potato taste while also experiencing that rich Mediterranean flavor from the olives. My dinner date loved the goat cheese variety, saying the flavor was extra rich and hard to stop eating! The horseradish flavor was underwhelming until you got to the two bites with jalapenos. Yum! The creamed corn flavor was a strange consistency and we each abandoned it after one taste. 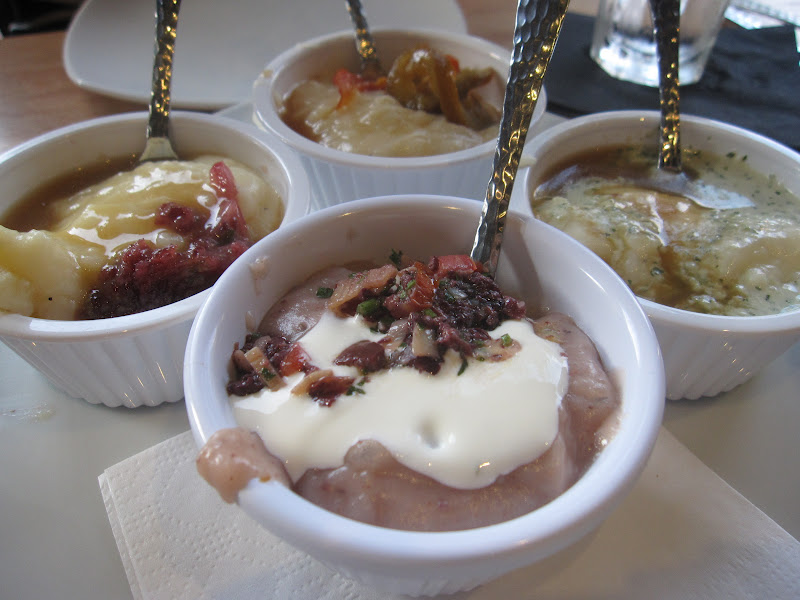 To balance the heavy potatoes, we also ordered the watermelon salad. The cubes of juicy watermelon came over a bed of arugula and garnished with two circles of onion and a cumin-cayenne dressing. The dressing didn't quite work for me. Also, the dish advertised black sesame seeds which I didn't see any of on the plate (or in my teeth), so I know they weren't there. 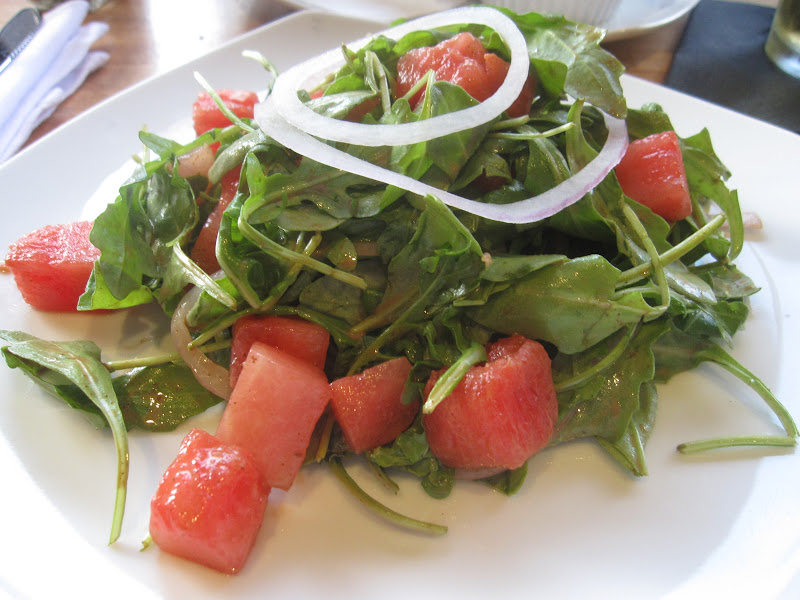 For our entrees, my friend ordered the lamb burger which came topped with tzatziki sauce. There was a heap of golden French fries on the side of her plate which had me wanting to reach across the table and sneak one. 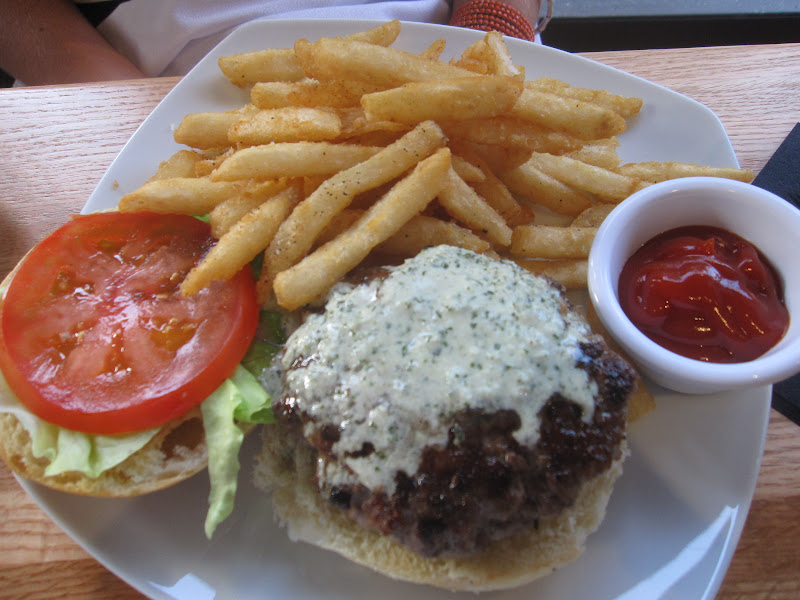 The waitress never asked my friend how she wanted her burger cooked, but it came "medium." She said it tasted like, "a burger on steroids." I think that's a compliment? She absolutely loved the French fries and was kind enough to let me grab a few. I concur, they were quite delicious! 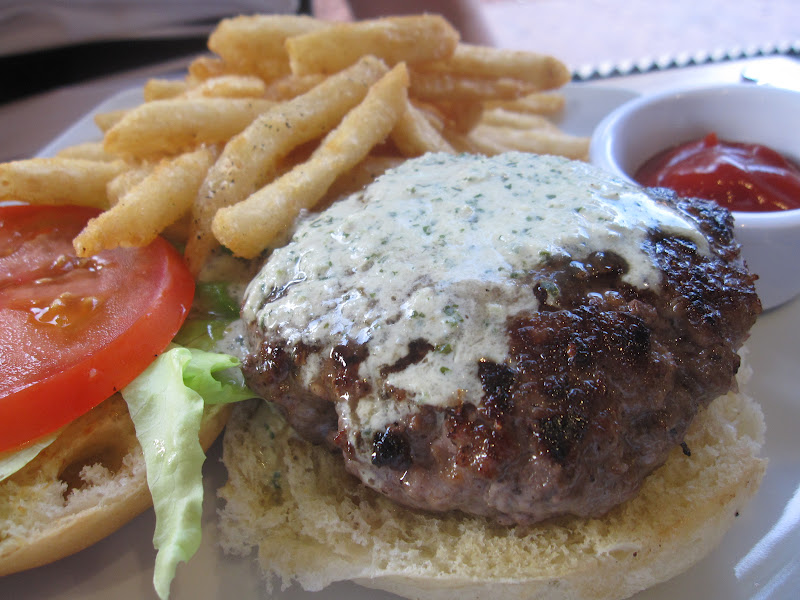 In the spirit of the Tip Tap Room, I ordered the tofu tips. Let me begin by saying I am so impressed that there is not only a vegetarian option on the tips menu, but an option that sounded amazing!

The tofu tips came over a foundation of quinoa with a side of veggies including a row of bright green, buttery avocado. 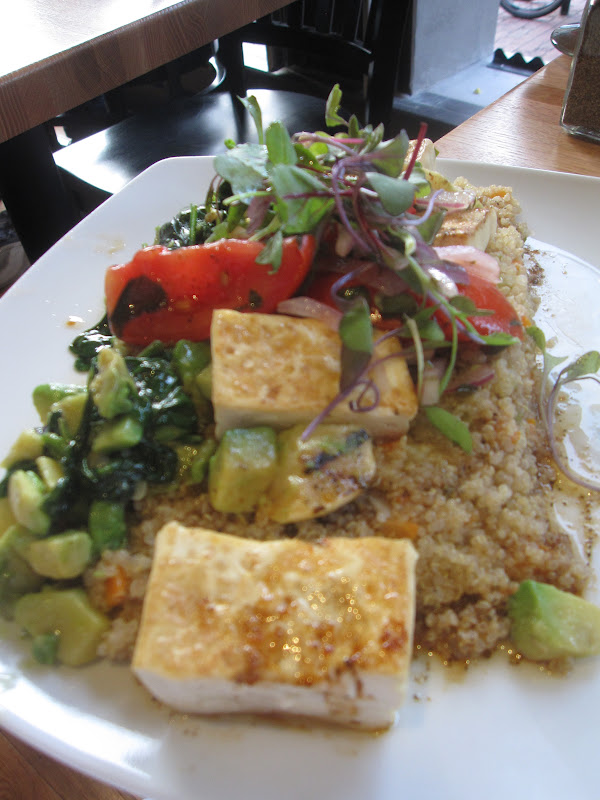 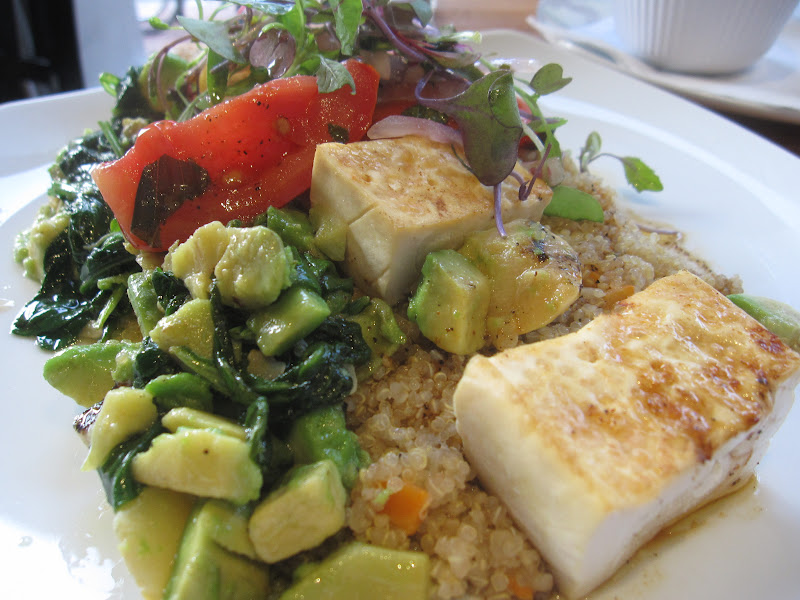 Sometimes a vegetarian entree can leave you feeling disappointed, but this dish had me feeling like the luckiest one in the restaurant. The dressing on the quinoa and veggies brought the whole dish together and I just kept gobbling it right up.

Somewhere in the middle of our dinner course our waitress came over to ask our names. I thought that was a bit odd. Maybe that would have been normal when we first sat down, but half way through dinner? Turns out she was confirming my name because I had tweeted about the restaurant earlier in the day and as a thank you, chef Brian wanted to send out a surprise.

Well, boy did he surprise us! Our waitress returned with two plates, both carrying beautiful desserts. The first was the bread pudding. Though it appeared dense, it tasted great and the cinnamon flavored whipped cream on top was heaven! 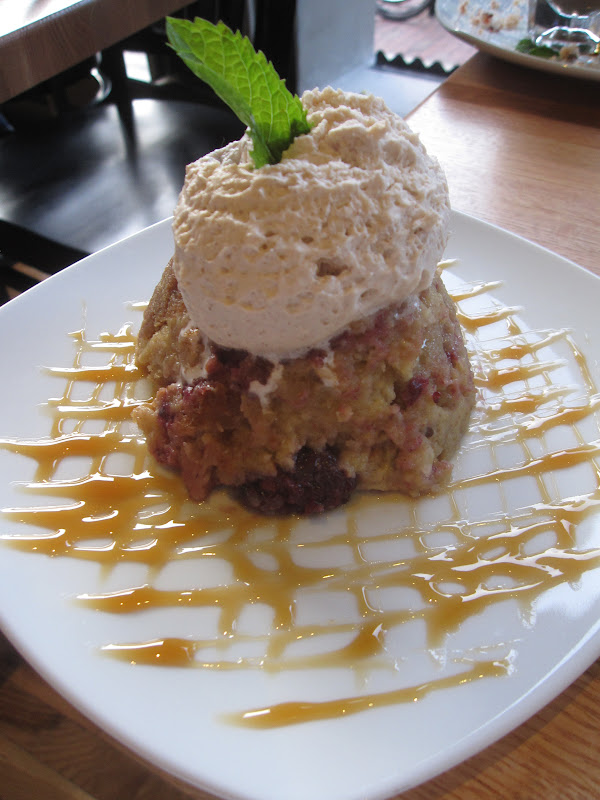 Next was the dessert special for the evening - three petite whoopie pies with berry sauce and a chocolate pudding frappe topped with candied bacon. 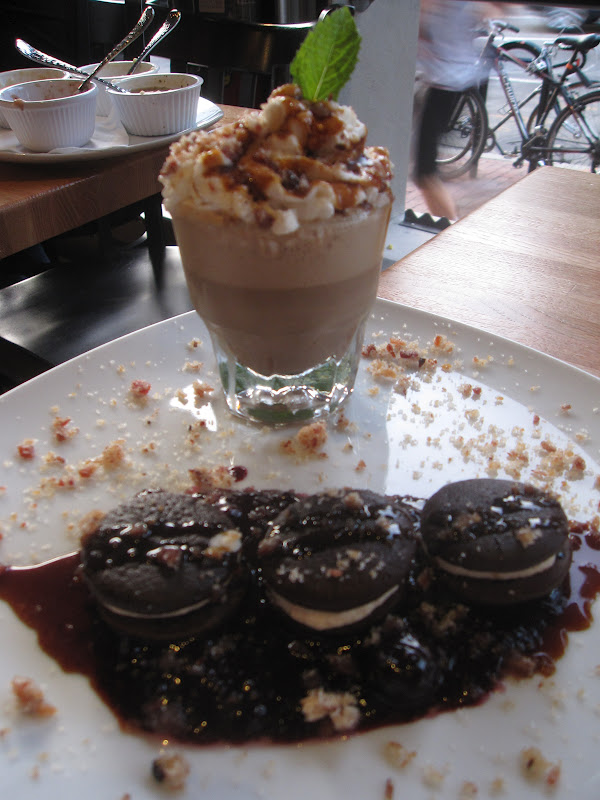 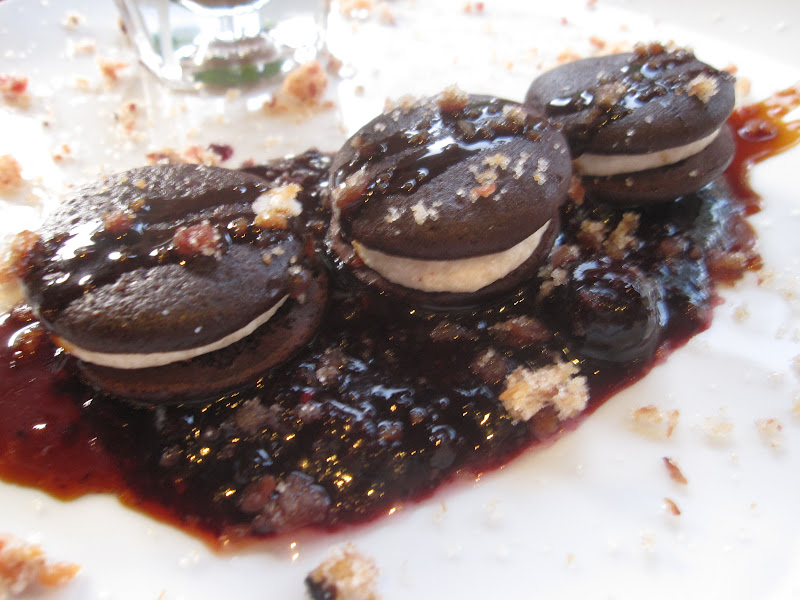 The presentation of the frappe looked like something out of Wonkaland! 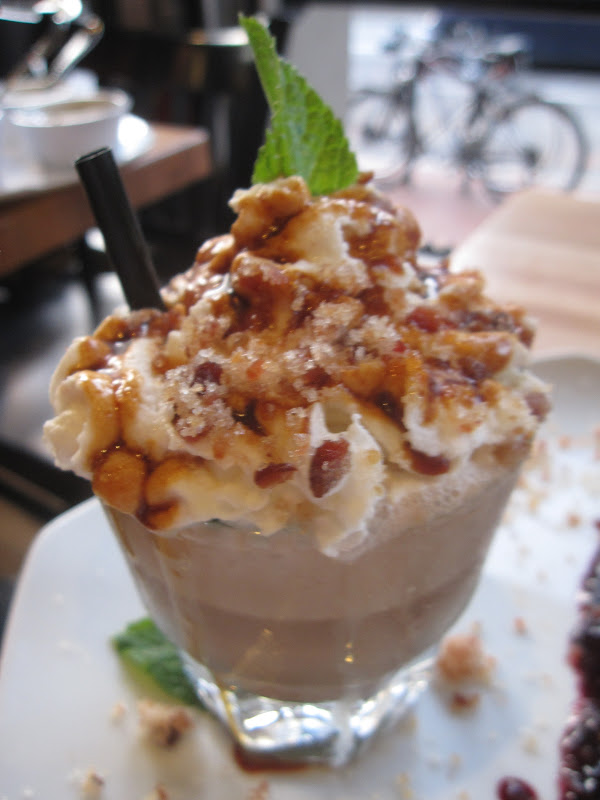 Our waitress set down the desserts and we were totally shocked. Before we could take our jaws off the floor, chef Brian appeared right beside me! He said, "I wanted to thank you for your tweet earlier this afternoon. I really appreciate you spreading the word." He then noticed what we were eating, peered over me and continued, "Oh! You ordered the veggie entree? How's it taste? I am still experimenting."

I gave him my honest review and he replied, "Admittedly, I'm a mega carnivore, as you probably guessed from my menu here, but I've dated three vegetarians, so I know how you suffer sometimes at restaurants." Then he proudly shared, "I once converted a girl back to meat with my Easter lamb. I'm very proud of that accomplishment!"

Chef Brian was such a delight to talk to and once he realized I was a vegetarian, he brought me a whole new dessert plate (minus the candied bacon). How sweet! Literally. 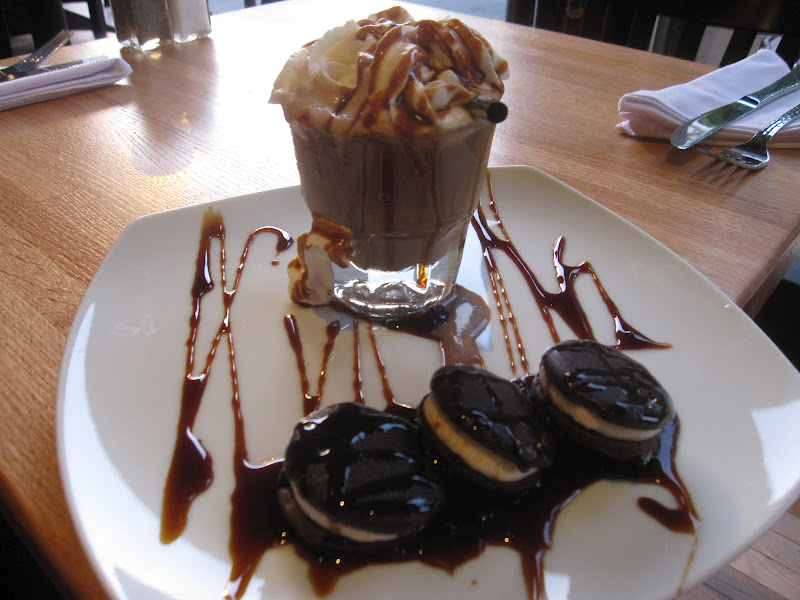 The chocolate pudding frappe tasted just like Yoohoo chocolate milk which used to be my favorite when I was a kid. 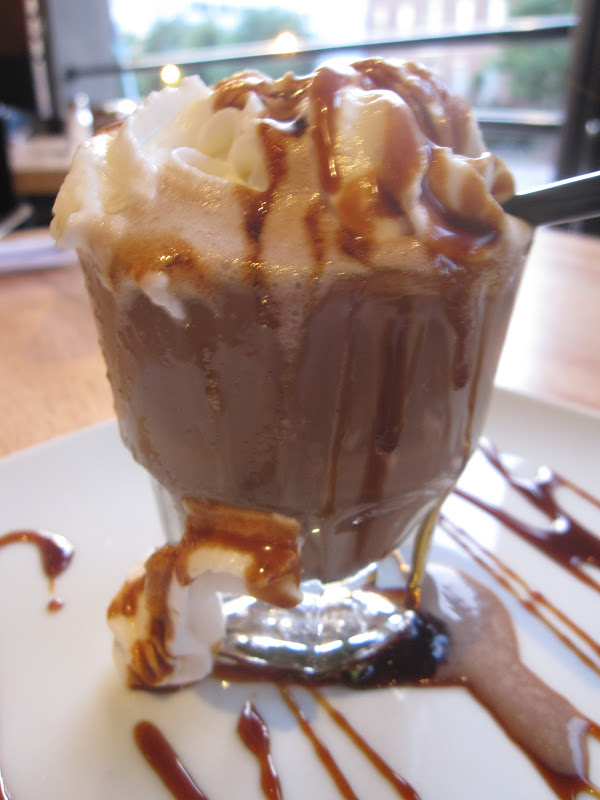 The bacon version of the dessert got a stellar review from my friend who called the candied bacon, "a delightfully strange surprise."

Overall, my experience at the Tip Tap Room was a fantastic one! It's easy to get to, has great people watching views, attentive staff, a huge beer list, a vegetarian friendly menu (and chef!) and killer desserts.

Thank you to chef Brian and team for showing us such a marvelous time and a special thank you for our complimentary confections!

Have you been to the Tip Tap Room? What did you think?

i've never heard of this place, but now i need to try it! the desserts look fantastic, sans bacon! :)
xoamy
www.cupcakesncouture.com

Whenever I visit I need to go to Tip Tap. Brian is the best and I love his desserts. Those whoopie pies better still be there whenever I go

Everything has its value. Thanks for sharing this informative information with us. GOOD works! جهاز كشف المعادن

Thanks for the blog filled with so many information. Stopping by your blog helped me to get what I was looking for. Now my task has become as easy as ABC. Shirdi Tour from Bangalore

thanks for this usefull article, waiting for this article like this again. Office security camera system installation

Thanks for the blog filled with so many information. Stopping by your blog helped me to get what I was looking for. Now my task has become as easy as ABC. rossini dorian

All your hard work is much appreciated. Nobody can stop to admire you. Lots of appreciation. jt mcdonald

Keep up the good work , I read few posts on this web site and I conceive that your blog is very interesting and has sets of fantastic information. sbobets

You delivered such an impressive piece to read, giving every subject enlightenment for us to gain information. Thanks for sharing such information with us due to which my several concepts have been cleared. اجهزة كشف الذهب

Pretty good post. I have just stumbled upon your blog and enjoyed reading your blog posts very much. I am looking for new posts to get more precious info. Big thanks for the useful info. اجهزة كشف الذهب

Thank you so much for such a well-written article. It’s full of insightful information. Your point of view is the best among many without fail.For certain, It is one of the best blogs in my opinion. اجهزة كشف الذهب

Thanks for taking the time to discuss this, I feel strongly about it and love learning more on this topic. If possible, as you gain expertise, would you mind updating your blog with extra information? It is extremely helpful for me. اجهزة كشف الذهب

Pretty nice post. I just stumbled upon your weblog and wanted to say that I have really enjoyed browsing your blog posts. After all I’ll be subscribing to your feed and I hope you write again soon! 예스카지노

thanks for the tips and information..i really appreciate it.. 우리카지노

Excellent to be visiting your blog again, it has been months for me. Rightly, this article that I've been served for therefore long. I want this article to finish my assignment within the faculty, and it has the same topic together with your article. Thanks for the ton of valuable help, nice share. Online shopping in pakistan

I think this is an informative post and it is very beneficial and knowledgeable. Therefore, I would like to thank you for the endeavors that you have made in writing this article. All the content is absolutely well-researched. Thanks... seo group buy 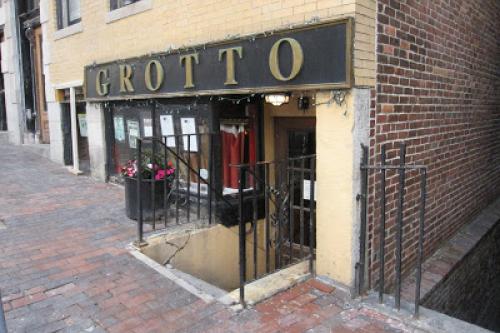 Tonight I went with two of my best girls to Grotto for Restaurant Week. 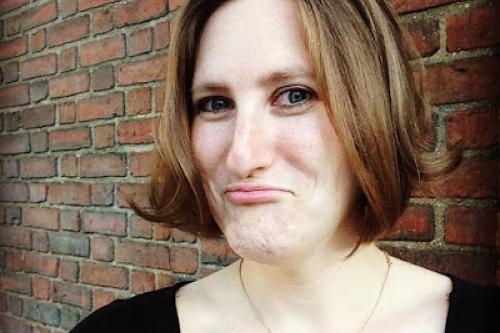 I have been saying this all year, but publishing my 2015 new year's resolutions here on the blog has really held me super accountable and made me exponentially more excited to share my progress. Today I am happy to report that I have crossed another resolution off the list! Number nine - donate my hair.

It's official, I'm a Rockport girl.