I have been to Rosa Mexicano in both New York City and Miami and I literally jumped for joy when I read the franchise would be opening a location in Boston!

On a rainy night last week I walked with a friend, hood up, from the Financial District over the bridge to the Seaport on a quest for Rosa Mexicano's tableside guacamole. The first ever Boston location is now open at 155 Seaport Blvd in the World Trade Center West building. 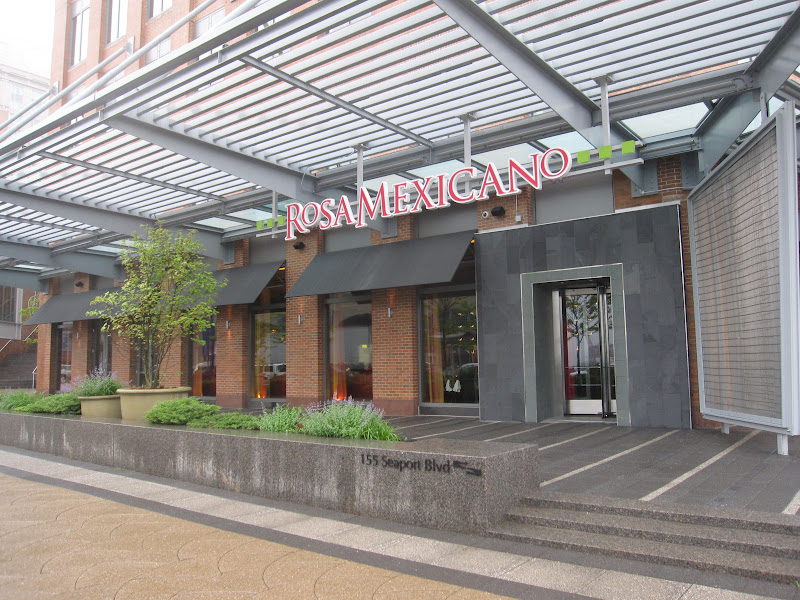 This Rosa Mexicano is an exact clone of the other locations. It's decorated with bright pinks, purples and oranges making you feel like you could be somewhere warmer, say . . . Mexico. 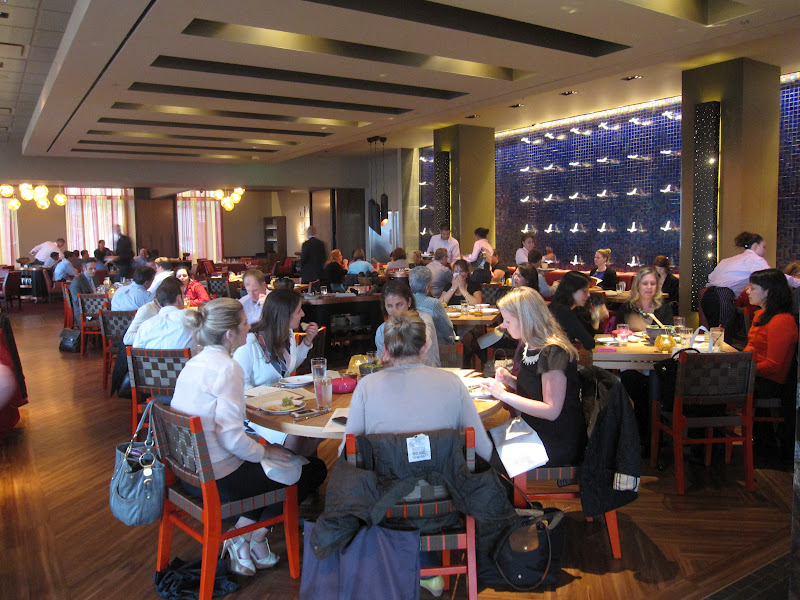 On the right wall of the main dining room is a stunning, purple water feature. I took a few still shots of the fountain, but it just wasn't doing it justice, so here is a video:

Something about that fountain is so serene!

We were seated at the first table by the front door which was anything but serene. Not only did we feel a gust of cold, wet wind every time the door opened, but we were also next to one of the computers where the wait staff input all of their orders, so we overheard them gossiping as well.

Minus the poor location, our table was quite beautiful. I love the vibrant colored plates and the gold candle holder. 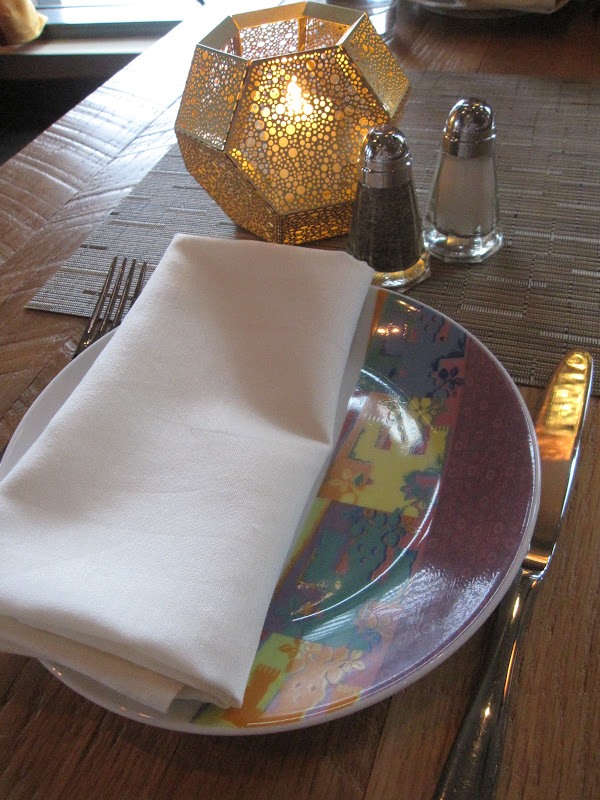 I really became fascinated with this candle holder! The thin, hole punched gold feels elegant, but you still get that backyard BBQ feeling from the candle glowing inside. 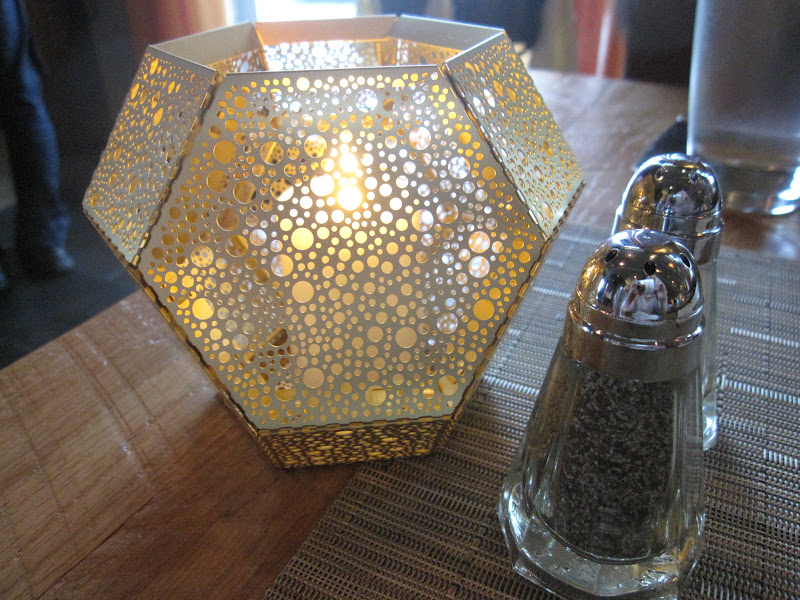 Once seated, our first order of business was to place an order for Rosa Mexicano's signature, tableside guacamole.

Within minutes of placing our order, the guacamole fairy rolled her cart right to our table! 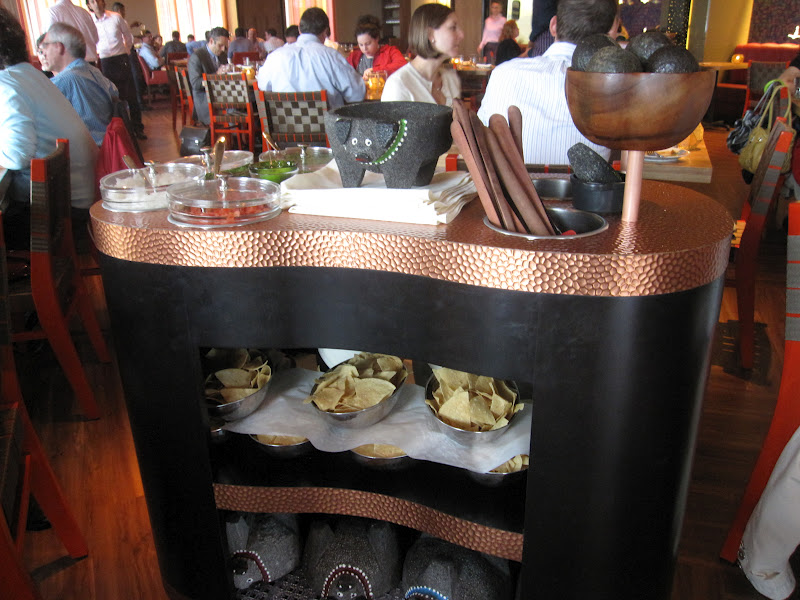 I adore this guacamole bowl! How fun! 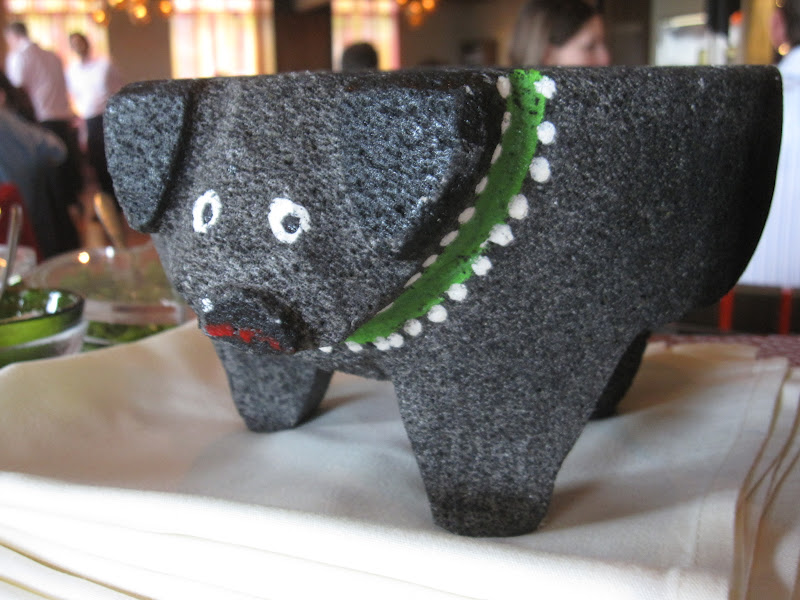 With all eyes on her, the guacamole fairy began cutting, scooping, chopping and mixing! 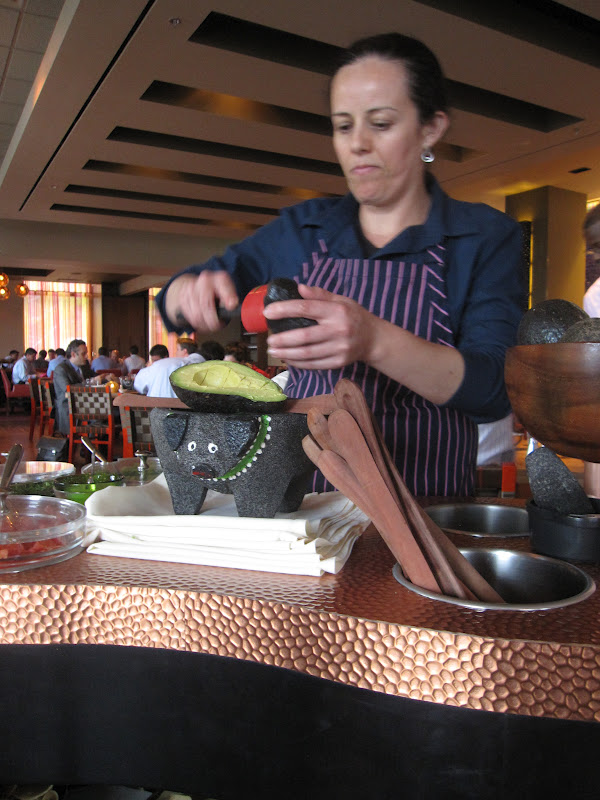 Voila! The finished product was fresh, creamy and packed with classic Mexican flavors. Like heathens, we wiped that bowl completely clean. 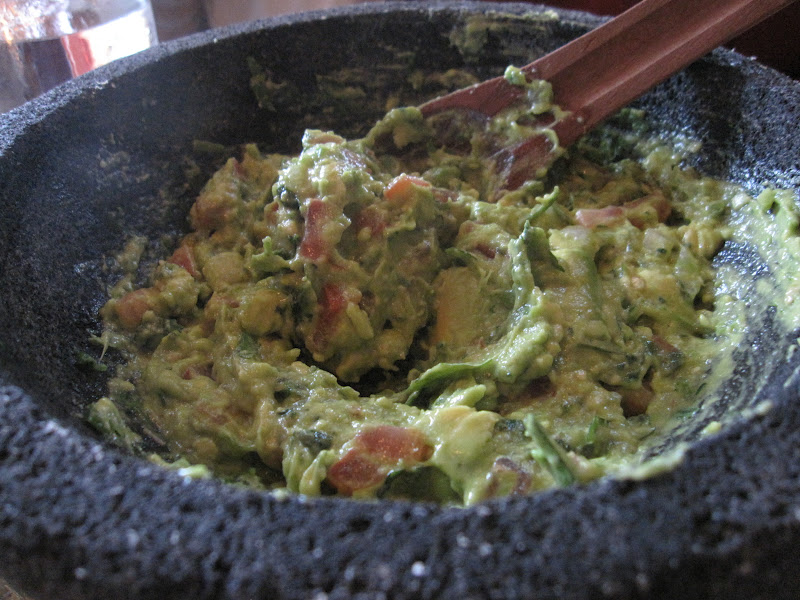 With the guacamole came a bowl of chips and two salsas - the green, which was extremely spicy and the red, which had a smokey flavor. The combination of the guacamole and the red salsa together was killer. 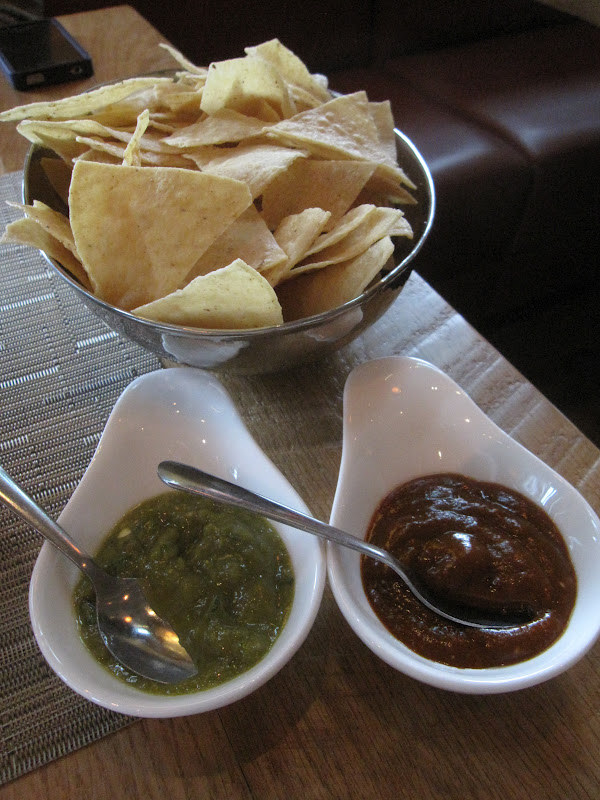 We ordered cocktails when we ordered our guacamole, but they took about 15 minutes to arrive. In the tropical spirit we decided on the mango and the watermelon cocktail. 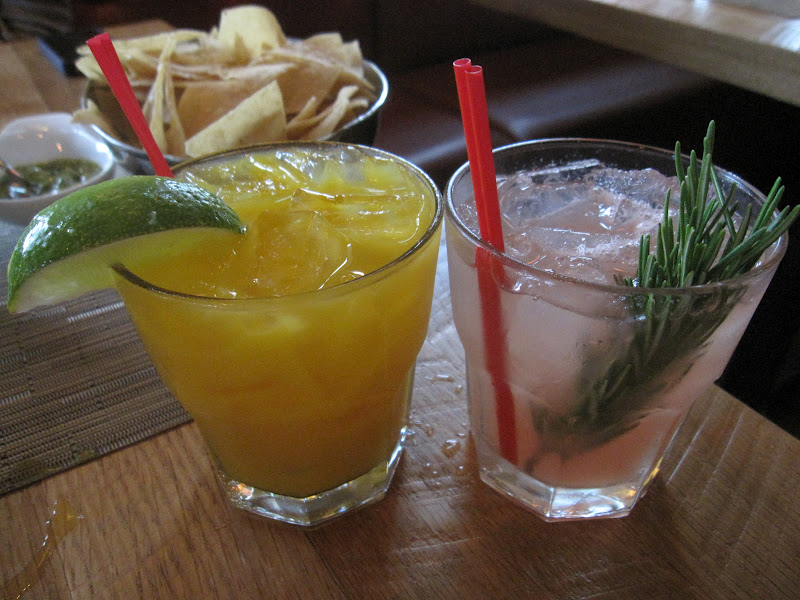 The "Mango Tropical" drink included silver tequila, agave and freshly pureed mango (as opposed to syrup or juice) which gave it that brilliant, orange/yellow hue. The drink tasted like fruit juice you drink on an island vacation straight from the tree. 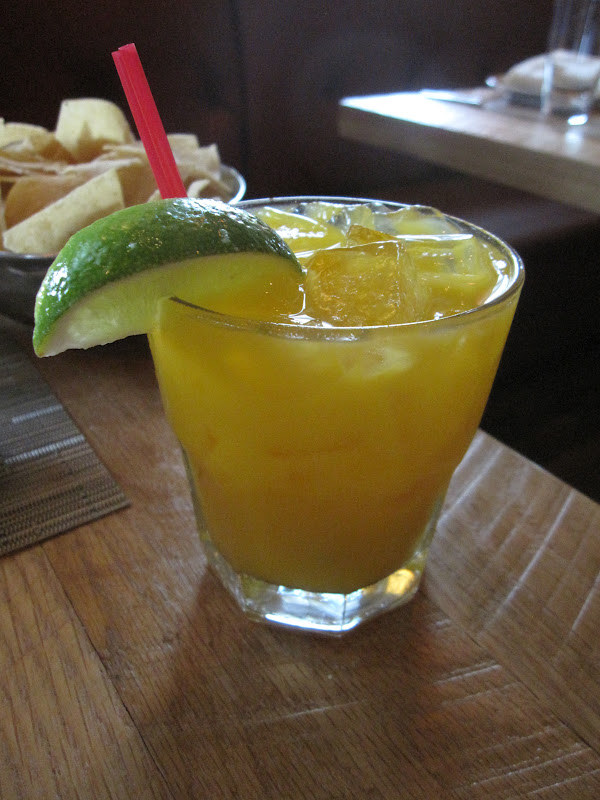 I ordered the cocktail called "La Sandia" which is Spanish for watermelon. It came garnished with a sprig of rosemary. Each time you took a sip, the rosemary would tickle your nose and give you a sweet whiff of it's signature smell. The rosemary helped balance the sugary, candy-like sweetness of the watermelon. 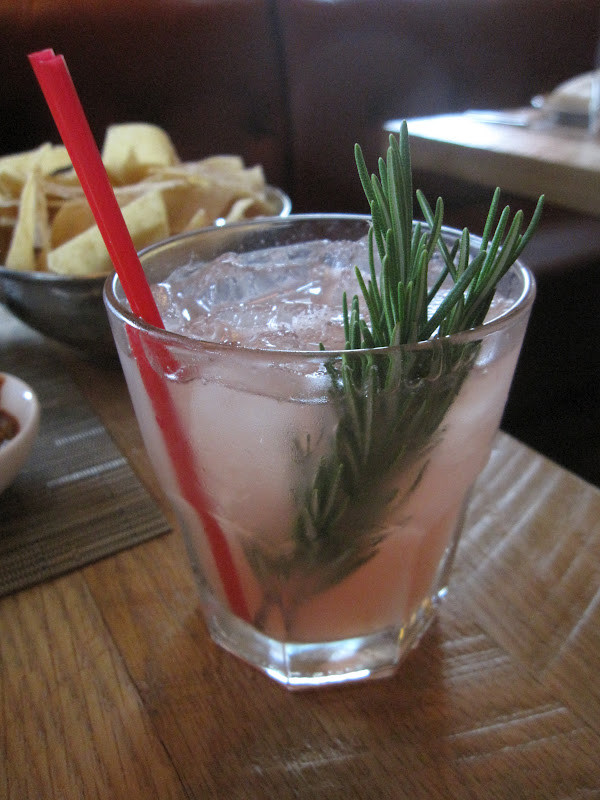 For her meal, my friend ordered two appetizers. The first of which was the crab empanadas. The outside was fried and crisped, while the inside was packed with crab meat. She raved about them! 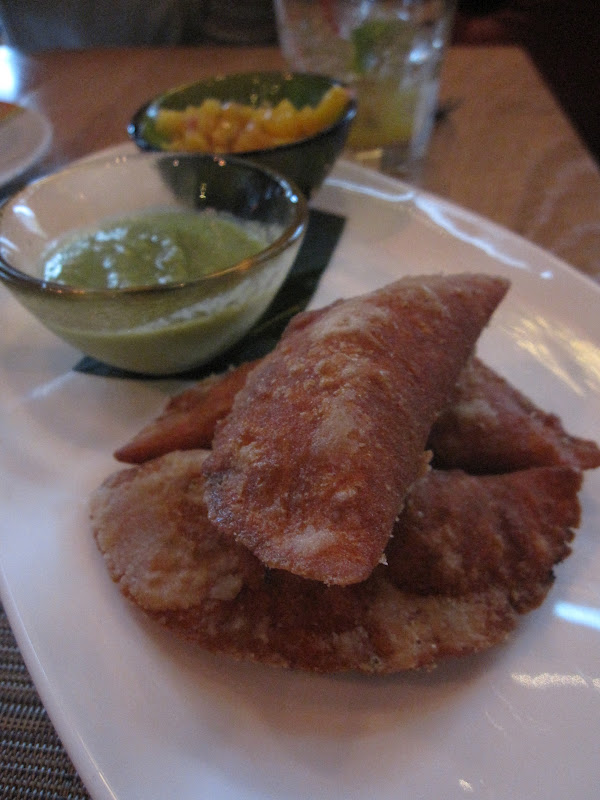 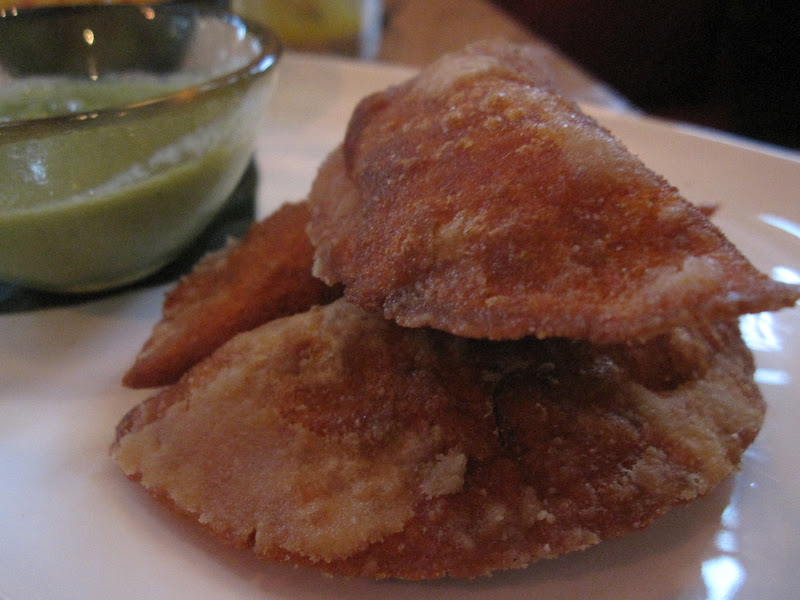 Her second appetizer was the papas fritas (Spanish for french fries) which came drenched in a mole sauce and topped with sesame seeds. Because of the mole, the french fries arrived soggy. My friend loved them and gobbled them up quickly, but I wasn't a fan. 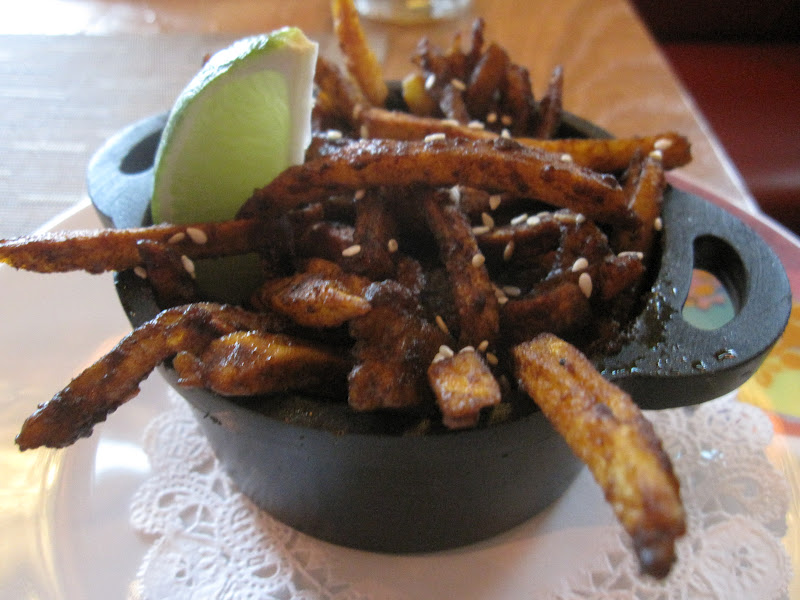 I decided on the enchiladas suizas which comes in multiple varieties - cheese, chicken or vegetable. Naturally, I choose the veggie option.

The enchiladas came swimming in a sea of green sauce and topped with scallions and grated carrots. The dish was a generous portion, had bold Mexican flavors and filled me up very quickly! 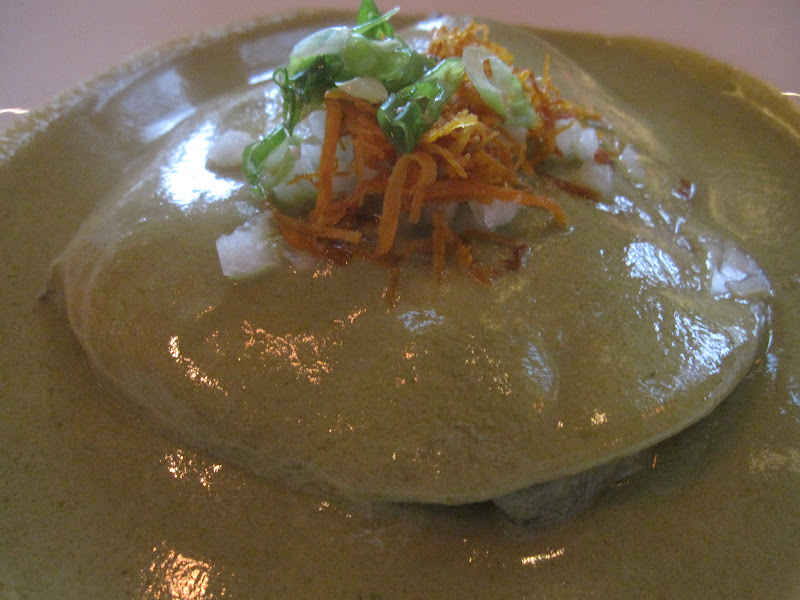 The surprise dishes of the night were the black beans and saffron rice served as accompaniments to the enchiladas. I have to say, these dishes were better than the entree itself! I am completely addicted to these black beans. I could not stop eating them! I also sent the rice for a swim in my enchilada sauce, which was an excellent call. 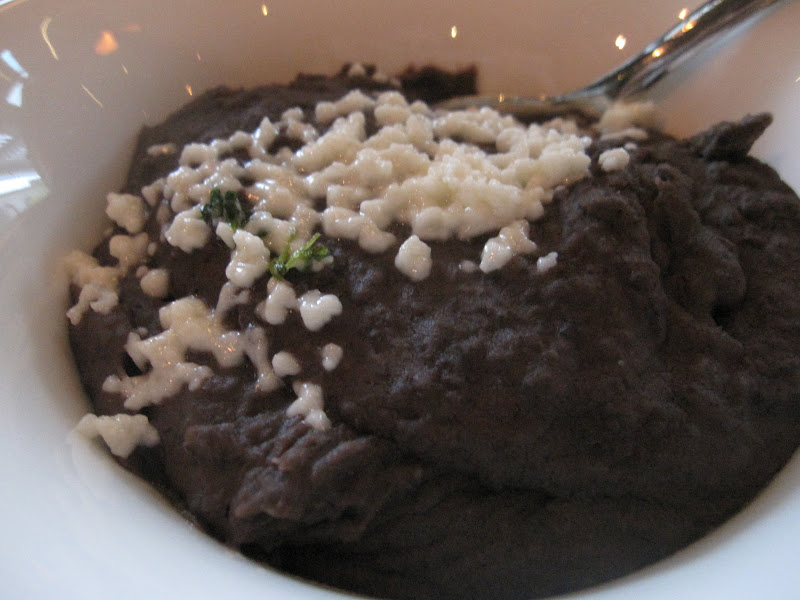 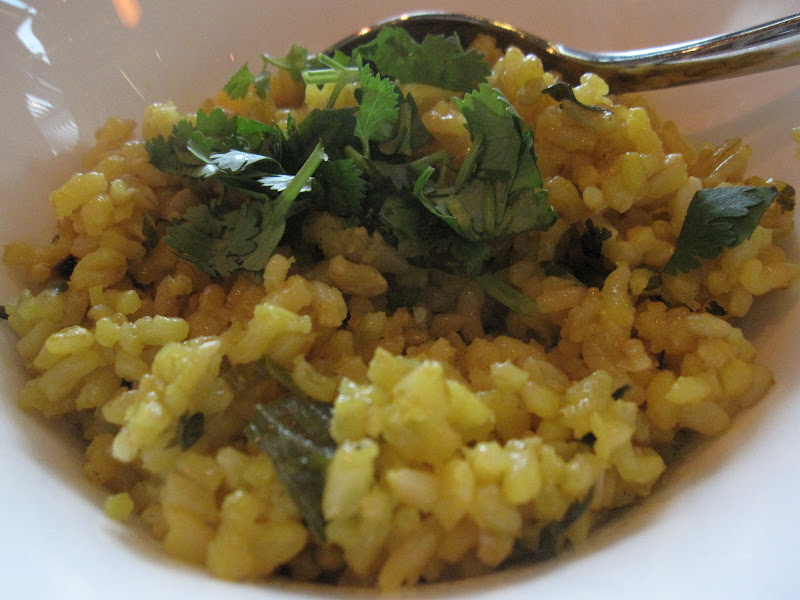 Though we were completely stuffed, out of curiosity, we asked to see the dessert menu. As soon as we saw they had churros, we decided to invoke the magical powers of that mystery second stomach, the dessert stomach.

Our waitress came back with our churros and they were inside a hot pink, paper bag. I thought to myself, "What a cute presentation!" Before I could even reach for the bag, our waitress picked it up and began shaking it! Apparently this is how they ensure every inch of your churro is coated in cinnamon sugar. 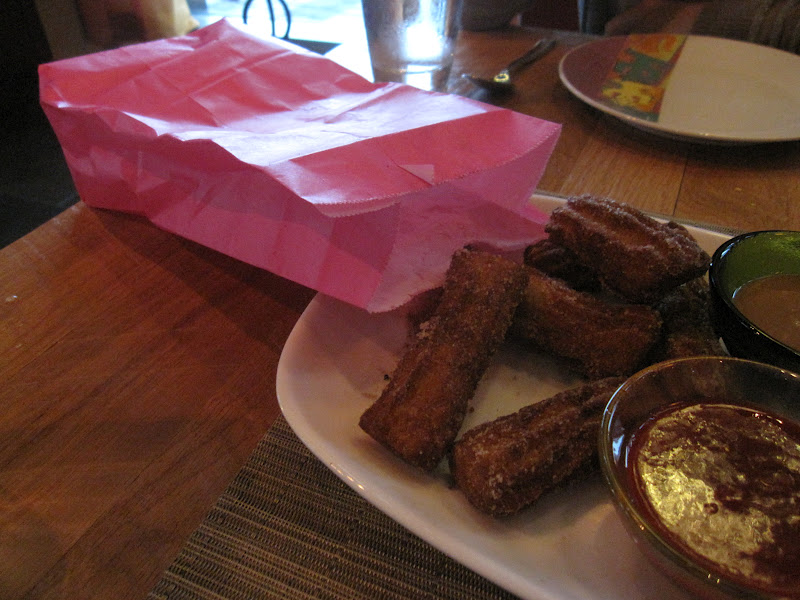 The shake and serve technique was a definite success! Our churros were crunchy on the outside, warm and doughy on the inside and a complete delight. 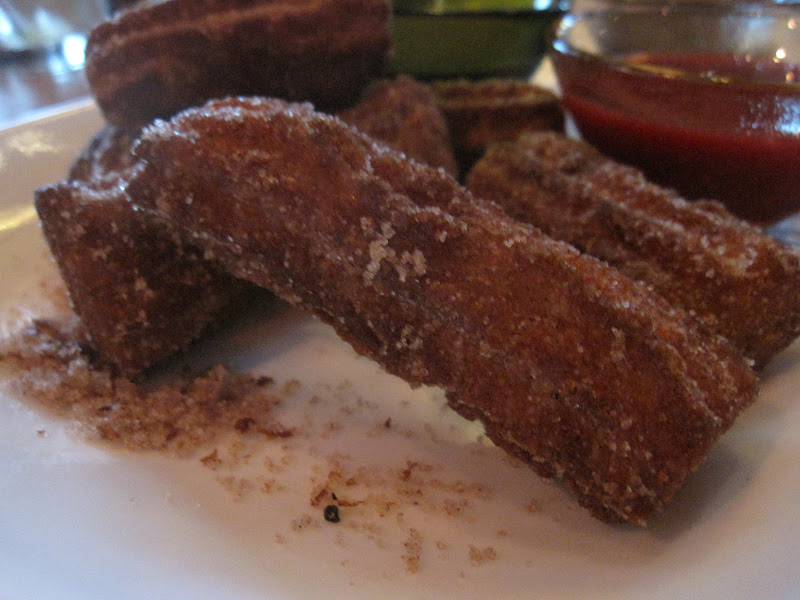 The churros came with three dipping sauces: caramel, chocolate and raspberry. The caramel sauce was too thin, the berry sauce was the too textured, but the chocolate sauce was just right. Shout out to my girl, Goldilocks. 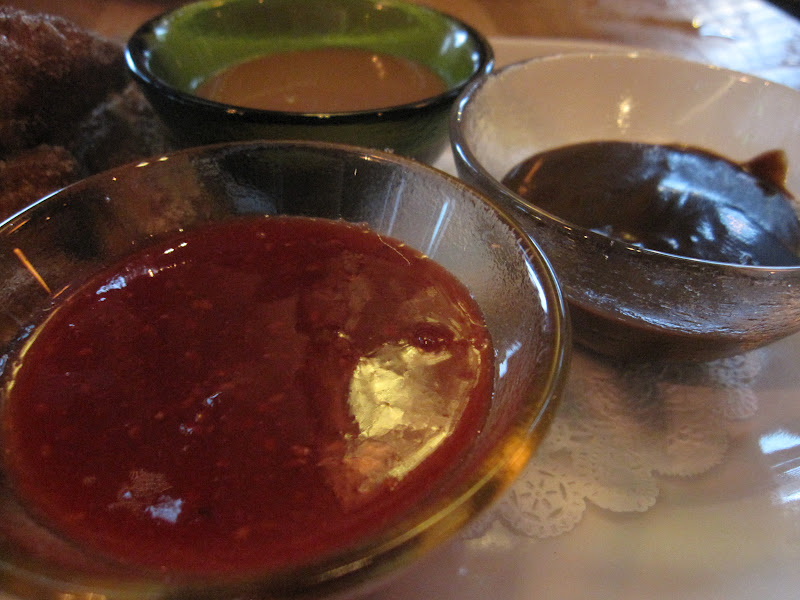 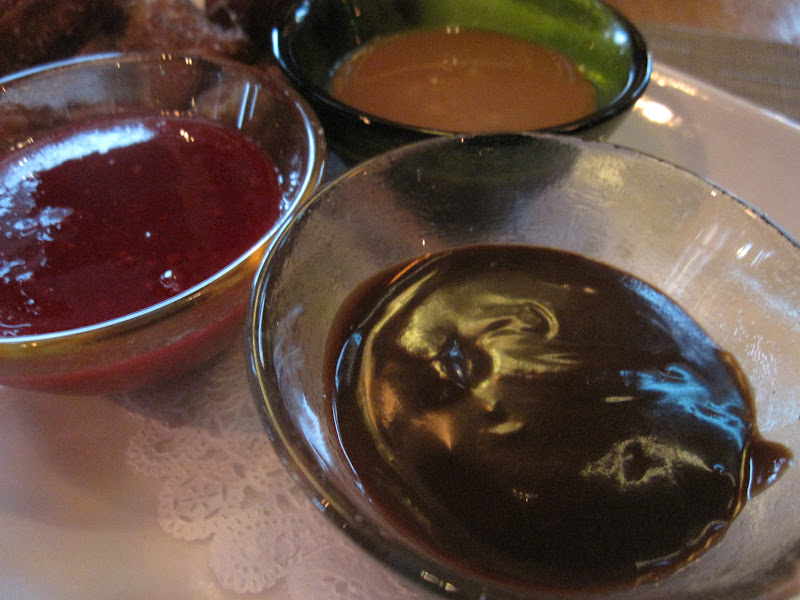 Before heading back out into the rain, we hit the ladies room. I was so grateful I had my camera with me because look at this hot pink door! I love, love, love it! 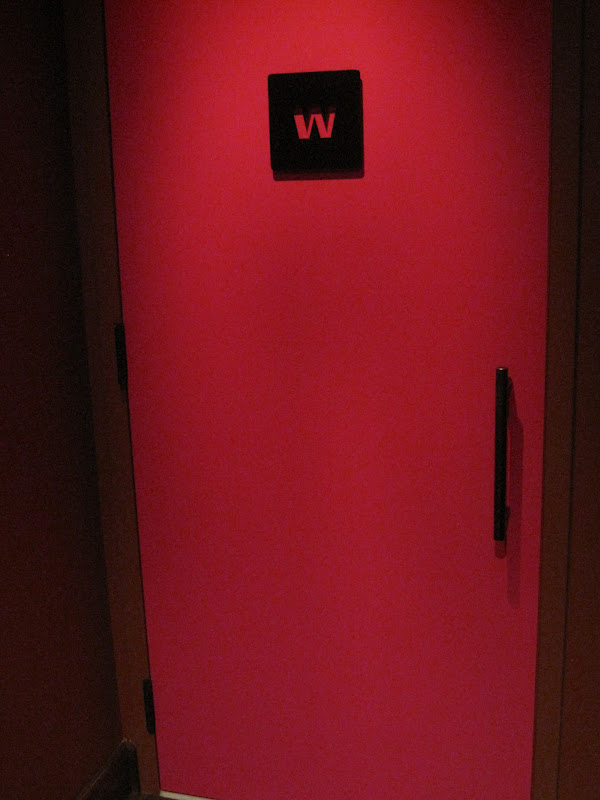 Rosa Mexicano has the recipe for a great night out. It has bright decor, fun drinks, delicious food and a guacamole that rivals my local favorite, Papagayo.

Have you been to the new Rosa Mexicano in the Seaport or to one of their other locations? Where does their guacamole rank on your list?

Rosa Mexicano was one of the first restaurants I ever went to for NY Restaurant Week with my mom when I was younger. I remember having an absolutely phenomenal meal that included the guacamole and also rice pudding for dessert. I need to go back some time

I am excited to try their guac!

Those foods look so delicious. Can taste it from here.

People love to dine out with their loved ones on the beautiful and best places. In my opinion www.thebestessayservice.com this link will give you a lot more to present the various lists of places. 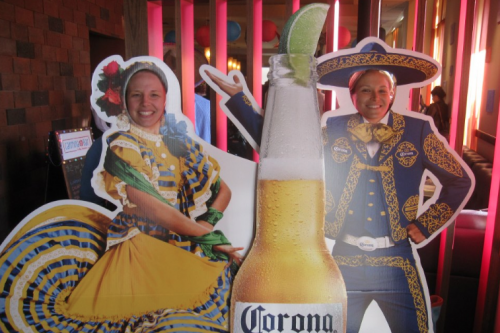 It's no secret, I love Rosa Mexicano. Starting this Thursday, May 1st, the restaurant will kick off a celebration appropriately called, the Five Days of Cinco de Mayo at Rosa Mexicano. From May 1st - May 5th the restaurant will offer a $35 prix fixe menu, a DJ and a mariachi band. During this five day celebration, you can enjoy Rosa classics like pitchers of margaritas, table side guacamole (the undisputed best guac on the planet), nachos, tacos, flautas, tortilla soup, enchiladas, churros and more. 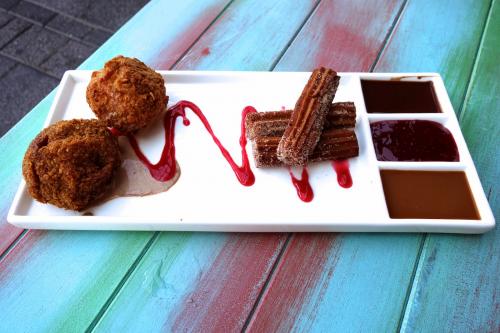 Those who read the blog regularly know that I rarely write about anything more than once. Whether it's a restaurant, a shopping destination, a museum or a special event, I'm generally a one and done kind of girl. 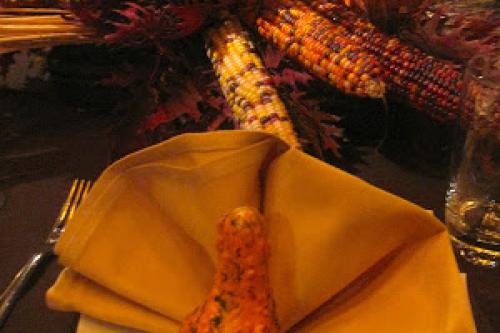 Each year for the past seven years my friends and I have gathered for a pre-Thanksgiving Thanksgiving.  In our group this beloved day is affectionately called PTT. As we speak my dishes for our annual celebration are baking in the oven. Since I have Thanksgiving on the brain I thought it only right to share with you an incredible feast I recently attended at Rosa Mexicano.