Dining Out: The Paramount

For the past year all of my friends who live downtown have been telling me I need to try the Paramount in Beacon Hill for brunch. Though I am certainly interested and would love to check it out, I actually wound up trying the Paramount's new, second location in South Boston first!

My cousin, his wife and their adorable 14 month old baby girl invited me to Southie for the day two weeks ago and we decided to take advantage of the gorgeous, sunny weather and walk to brunch. They suggested the Paramount (which arrived in Southie a few months ago) and I was more than happy to give it a whirl.

You can spot the Paramount on Broadway by it's huge front windows which are open to the street. 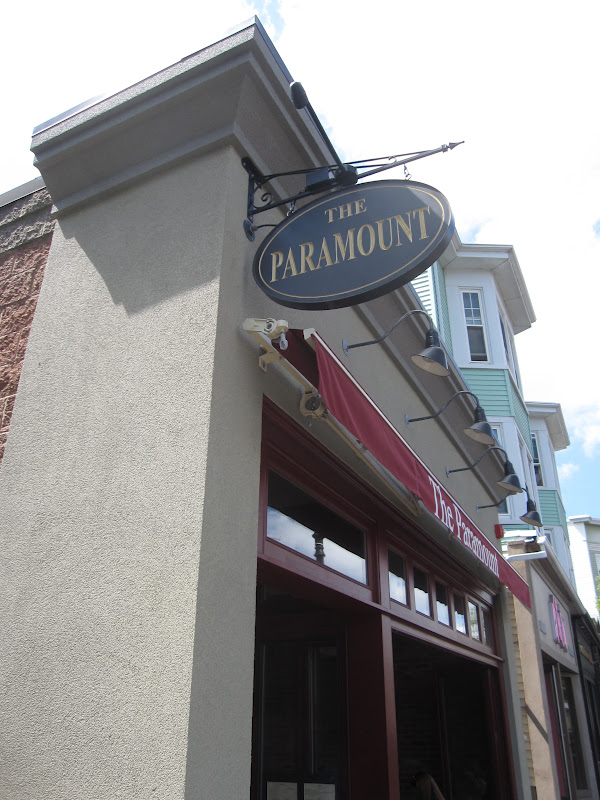 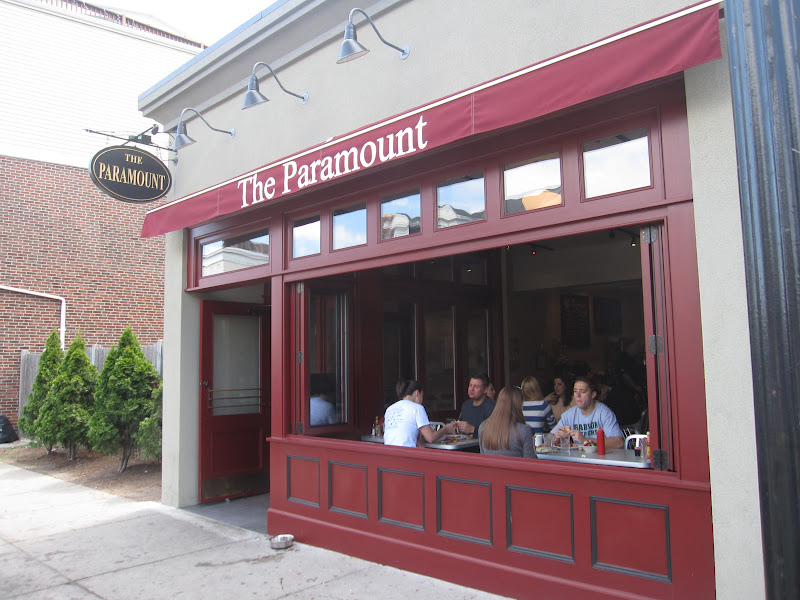 When we walked in the first thing I noticed was the exposed brick walls. What can I say? I'm a sucker for exposed brick. 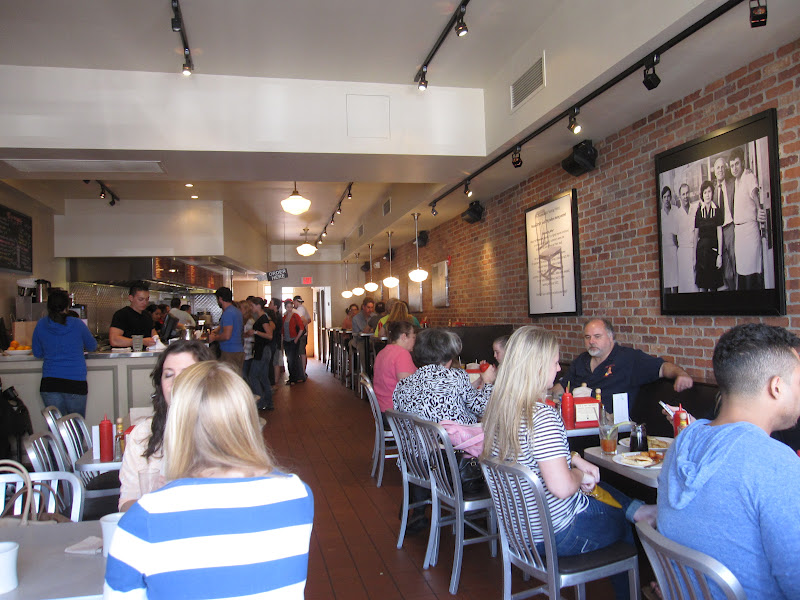 The restaurant has tables in the front, then high tops along the back, right wall. The counter, where you stand to order, is on the left side. 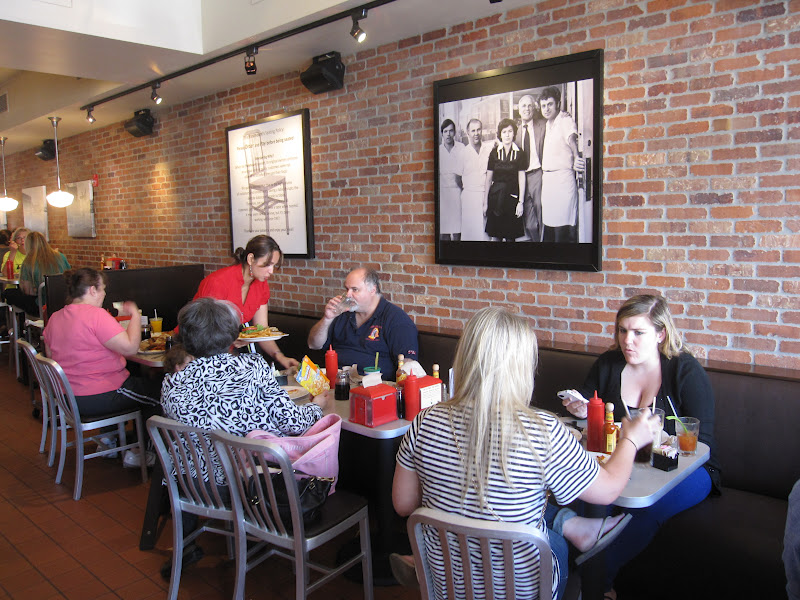 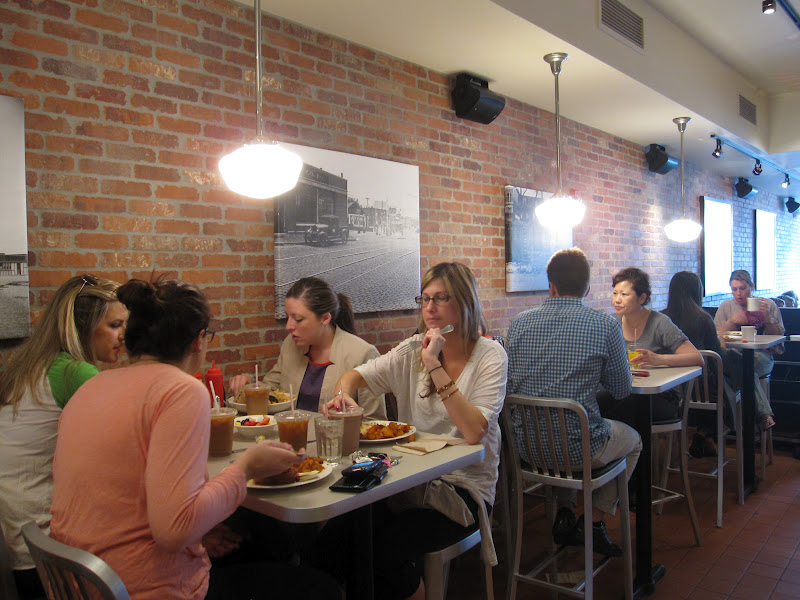 We got in line and there were about eight people in front of us, giving us plenty of time to decide on our items. 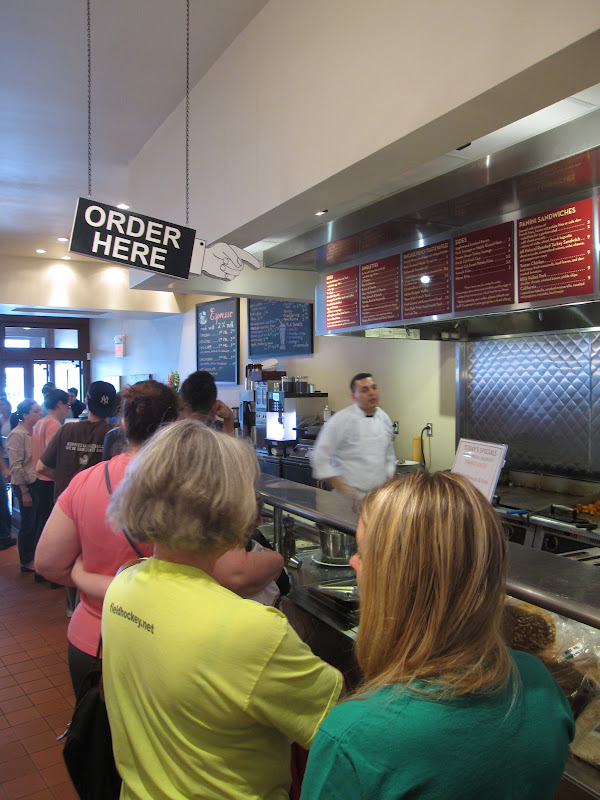 Everyone was fixated on the chefs preparing the food right before their eyes. 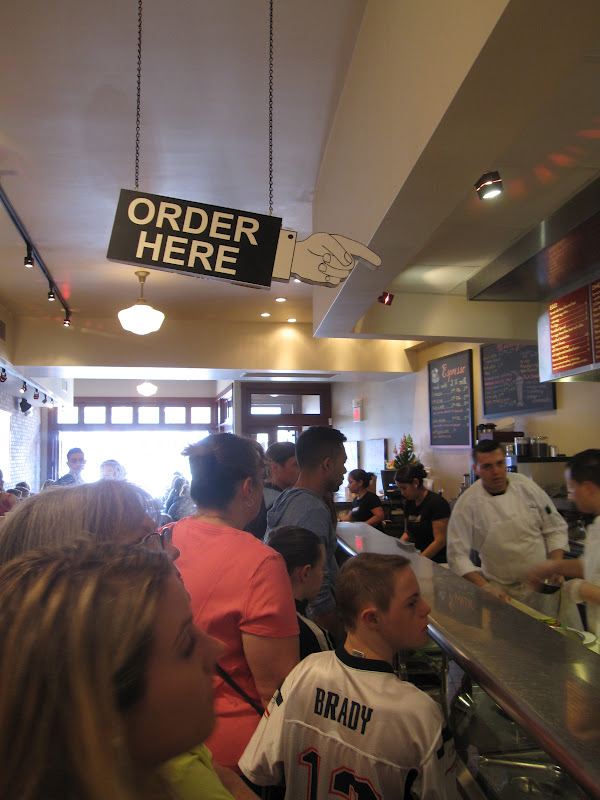 From the counter you can see all of the ingredients on the other side. 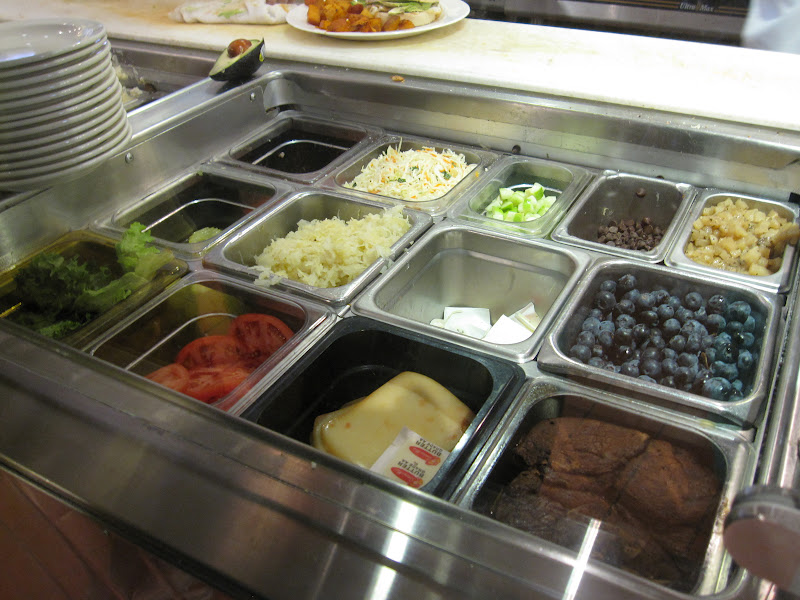 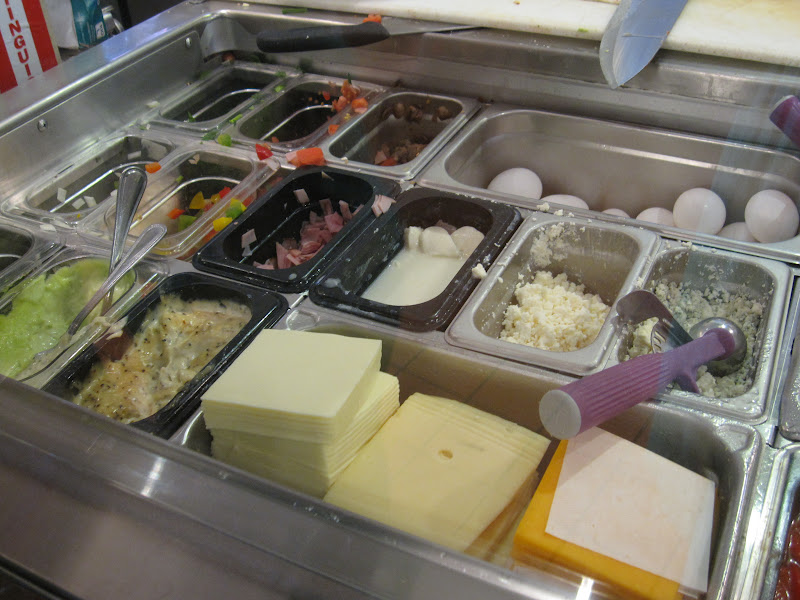 I finally wound up in front of the specials plaque which had some very nice, brunch-worthy options. 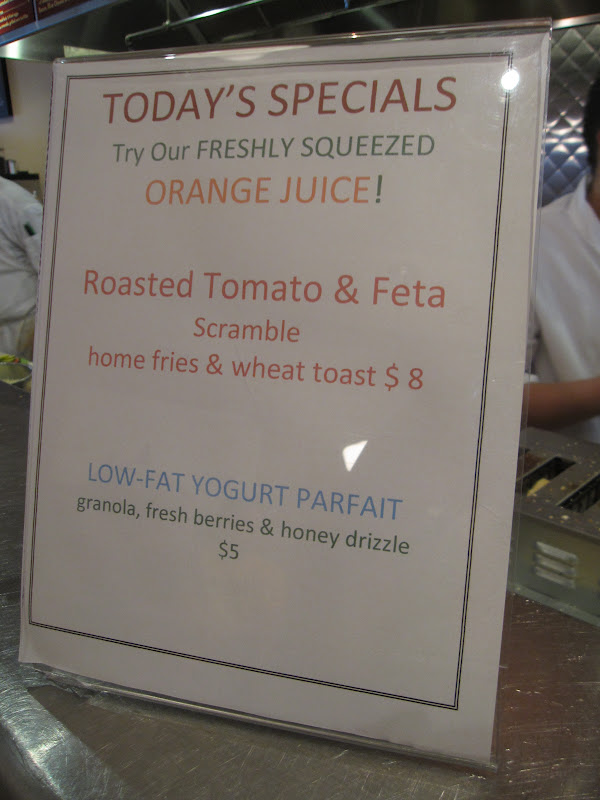 When we placed our order it was fun to watch the chef make everything right there. I can't remember the last time I ate out and saw my food being prepared. 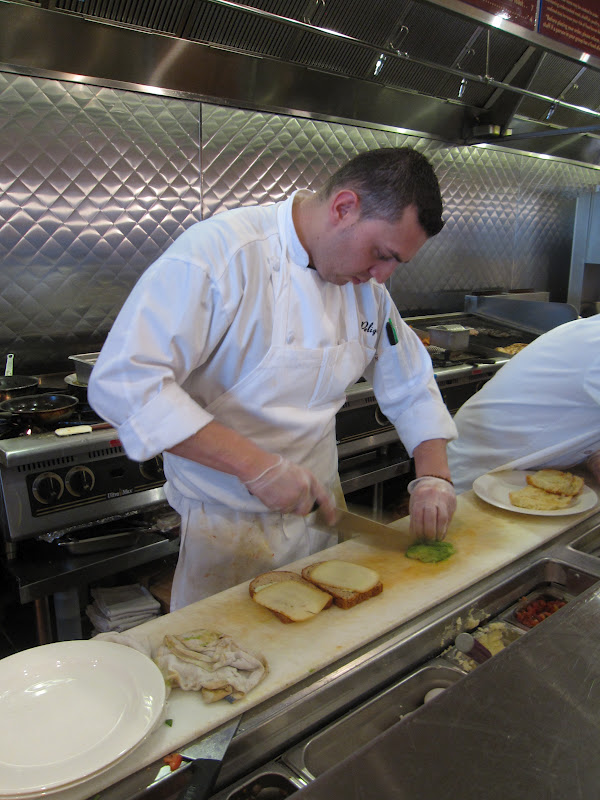 As we neared the end of the counter I spotted the drink menu which was my written in my favorite - colored chalk. 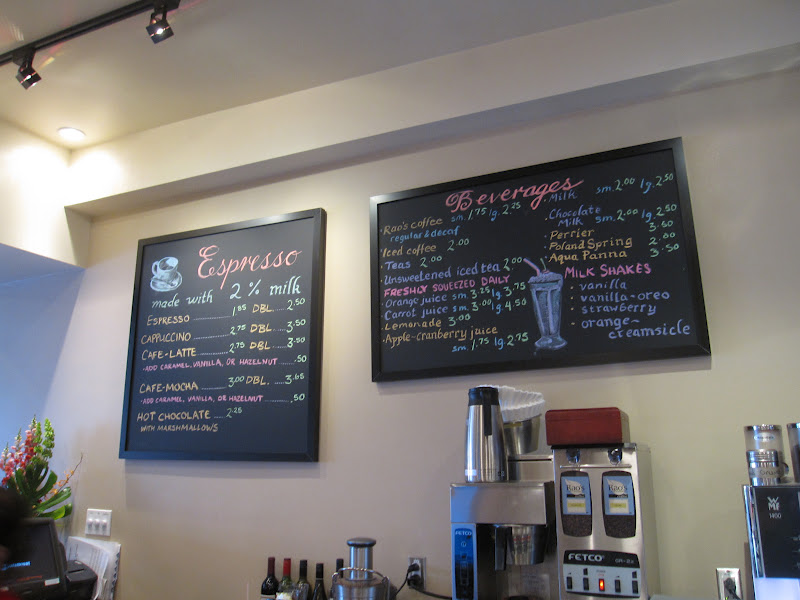 Once we had all of our food, we paid and went looking for an open table. At the Paramount you order at the counter, then take a seat (if there is one).

We got super lucky and just as we were ready to sit, a group got up from the table right in the front window.  We got the star table! 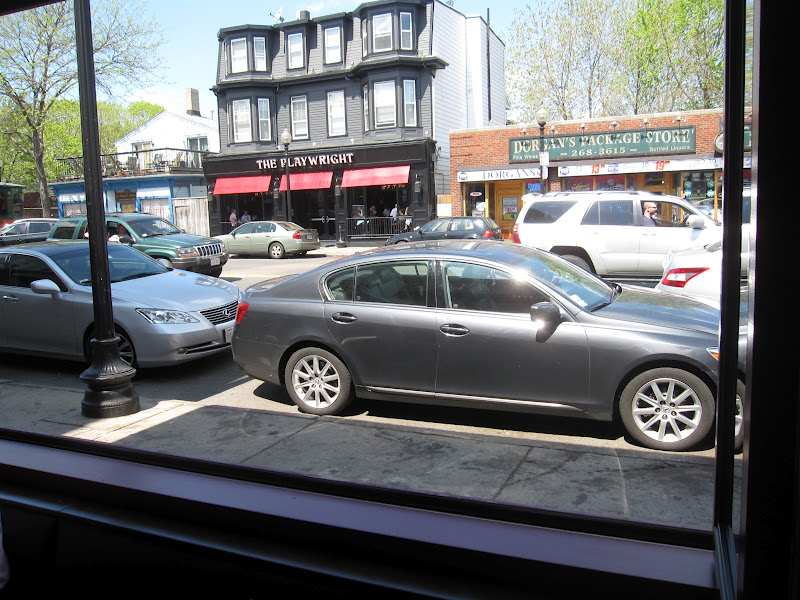 Since it was such a nice day out it was fun to watch everyone walk by with their babies and dogs. Our baby bruncher kept spotting the dogs and going, "Dog, dog!" I forget how much babies can lift your spirits with the silliest things.

Once we were settled into our fabulous table it was time to dig in! My cousin ordered the chocolate chip pancakes. He said the stack was perfect and fluffy and that they weren't overly buttered. 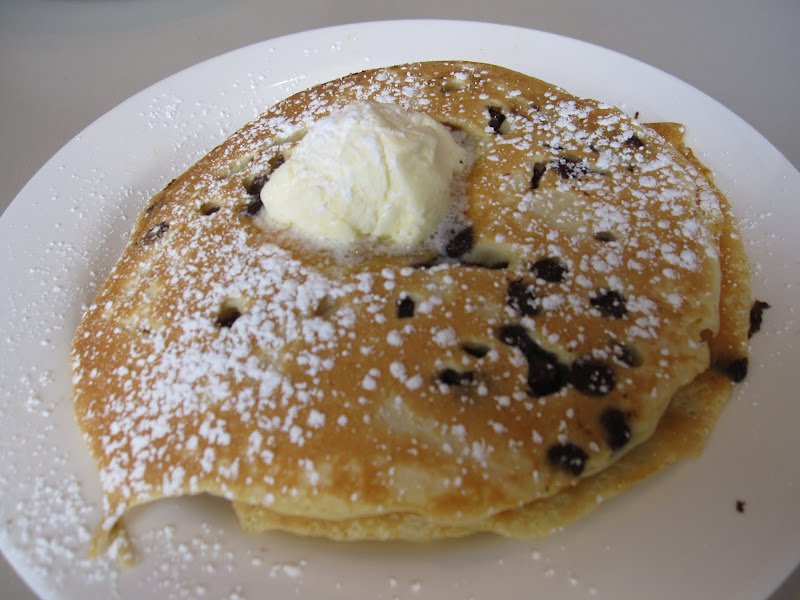 His wife ordered the BBQ chicken cobb salad and it looked incredible! So much so I was contemplating giving up my vegetarianism to take a big bite of that BBQ chicken with a huge piece of avocado. Yum! 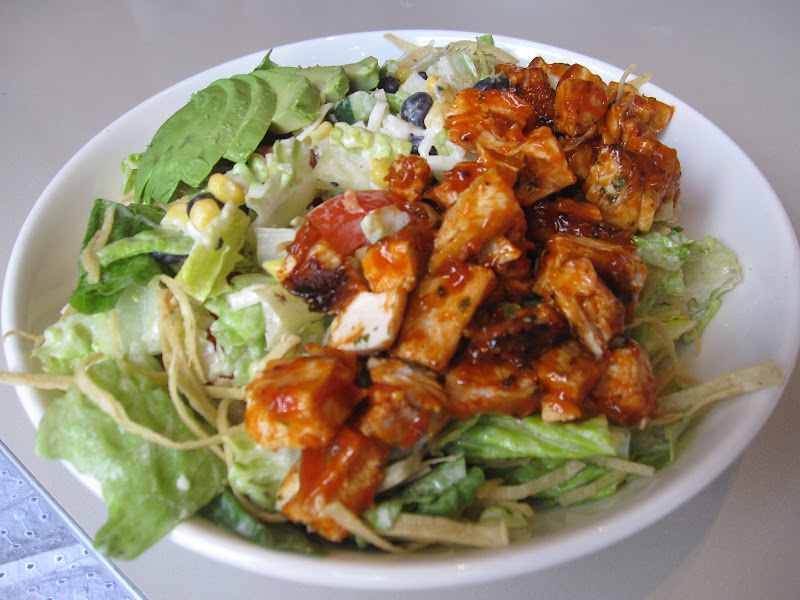 In addition to their amazing meals, my cousins each ordered a bloody Mary. They said it was the perfect mix of vodka, tomato juice and spices. 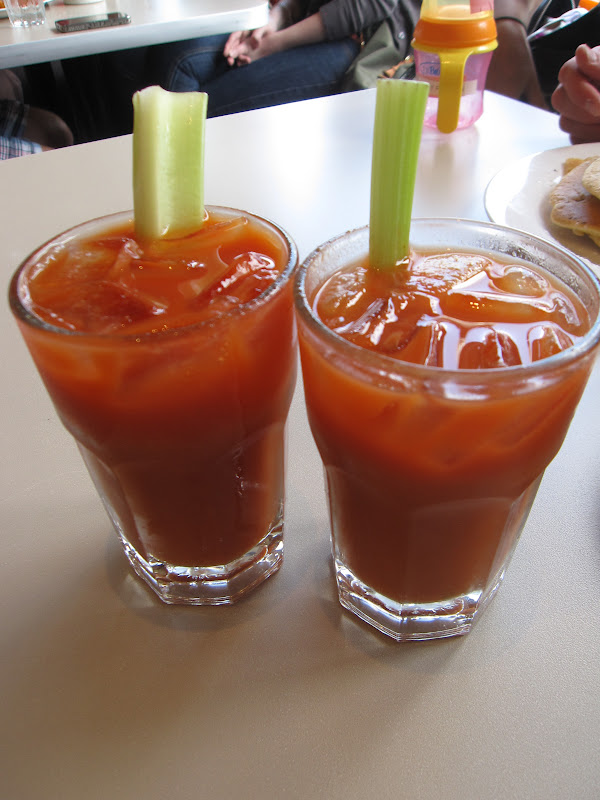 For our baby bruncher we ordered the fruit bowl which was a surprisingly generous portion. It was super bright and each fruit was delightfully fresh. 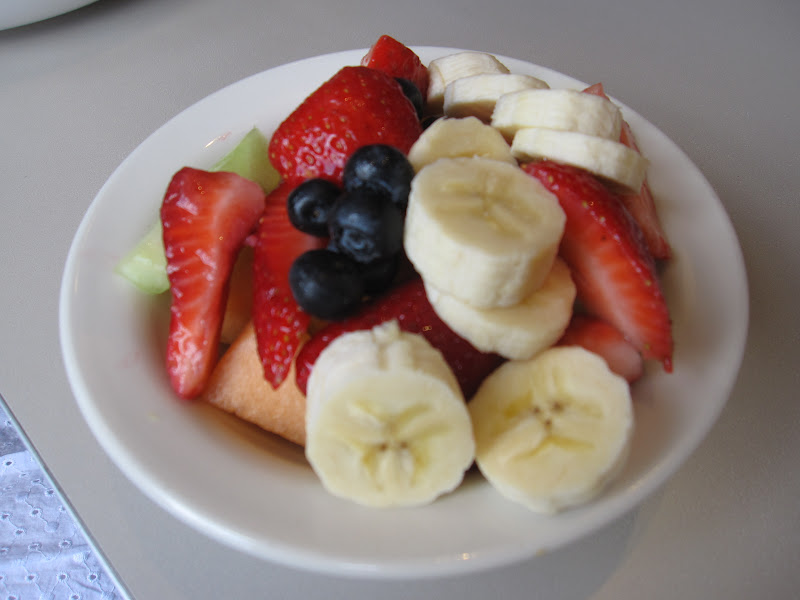 Though I am normally an omelette, home fries and toast girl at brunch, this time I decided to go the lunch route. I ordered the California panini which was portabella mushrooms, avocado, roasted red peppers and mozzarella cheese on focaccia bread with pesto mayo. 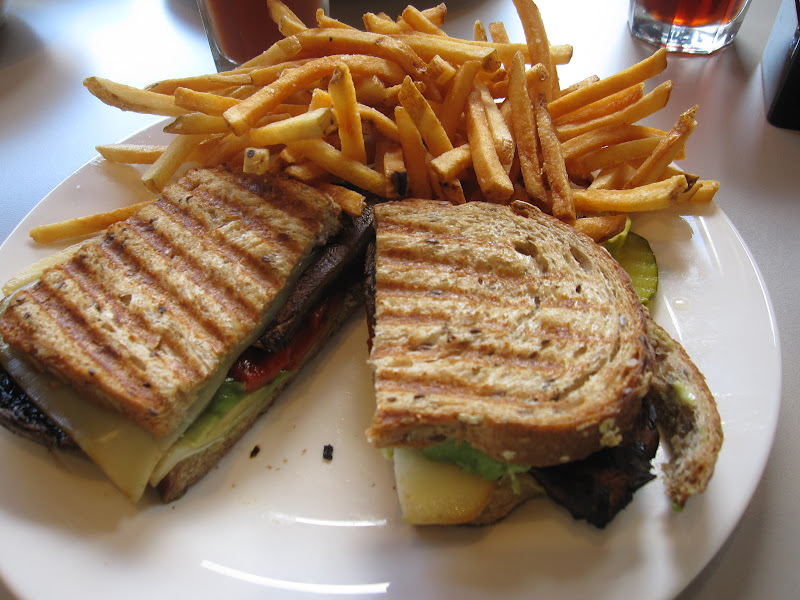 I have to tell you, this was a sensational sandwich. Though it was embarrassingly messy to eat, the veggie and cheese flavors worked harmoniously together and the crunch of the bread gave it that extra push from great to excellent. 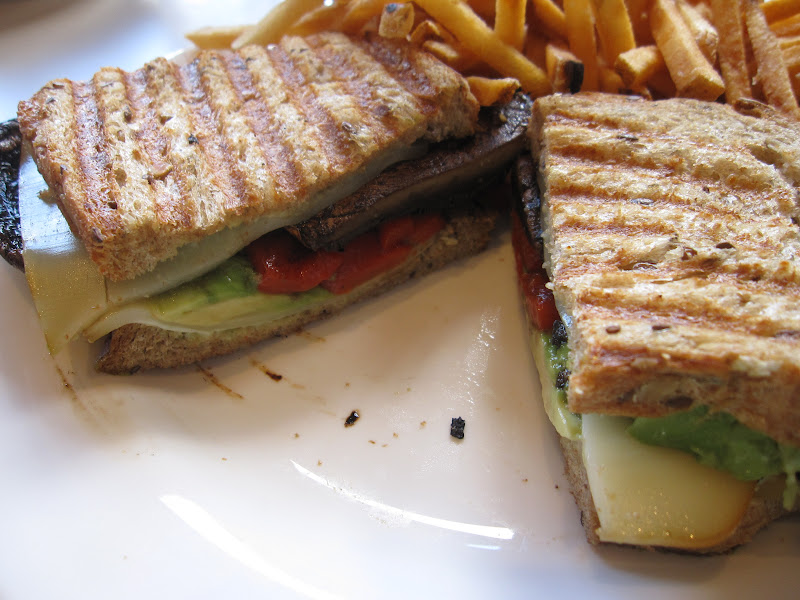 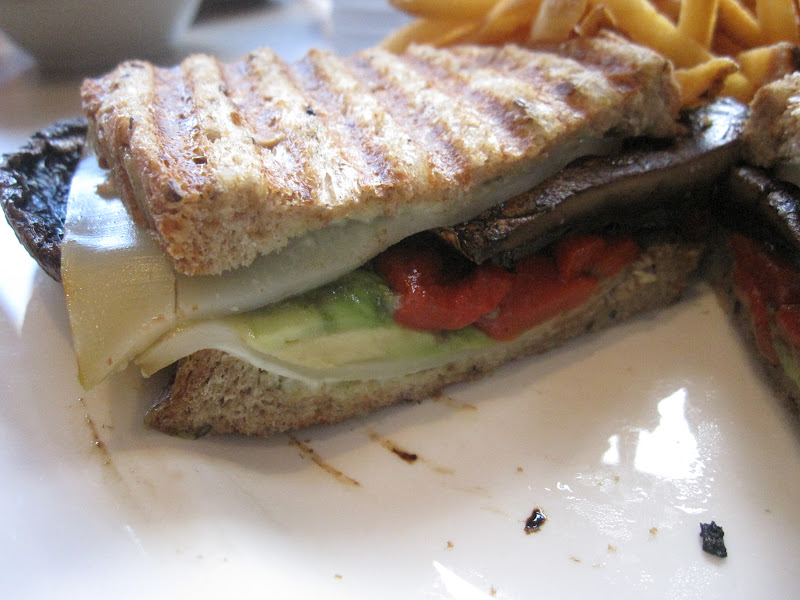 My sandwich came with thinly cut french fries which were piping hot and delicious for the first ten minutes but then became hard, overly crunchy and not worth eating. Not sure what happened there.

The vibe at the Paramount was very relaxed and the servers never pressured us to hurry or give up our table. Though the restaurant was always full, it never felt loud or crowded. I would absolutely take the trip back to Southie any weekend to have this food again.

On our way out I noticed these two historical Boston pictures of the Speedo run. I love that they incorporated these quirky pieces of Boston memorabilia. 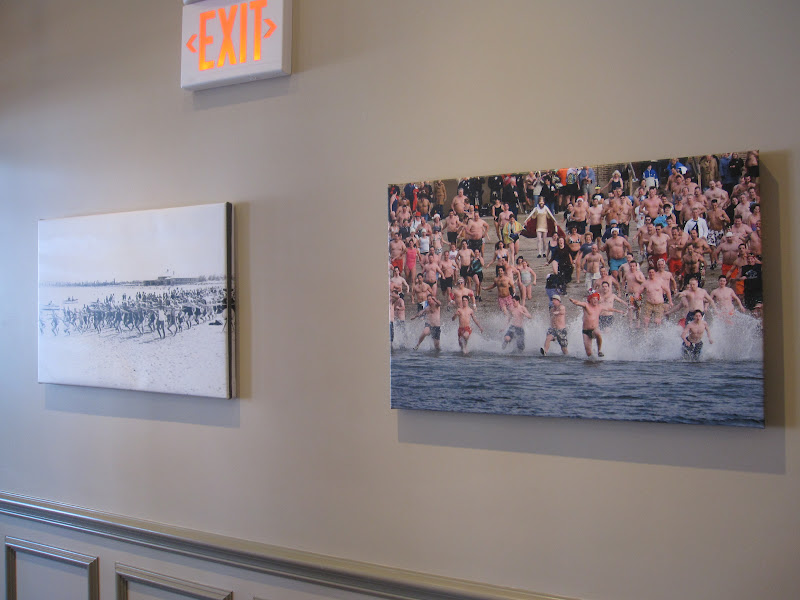 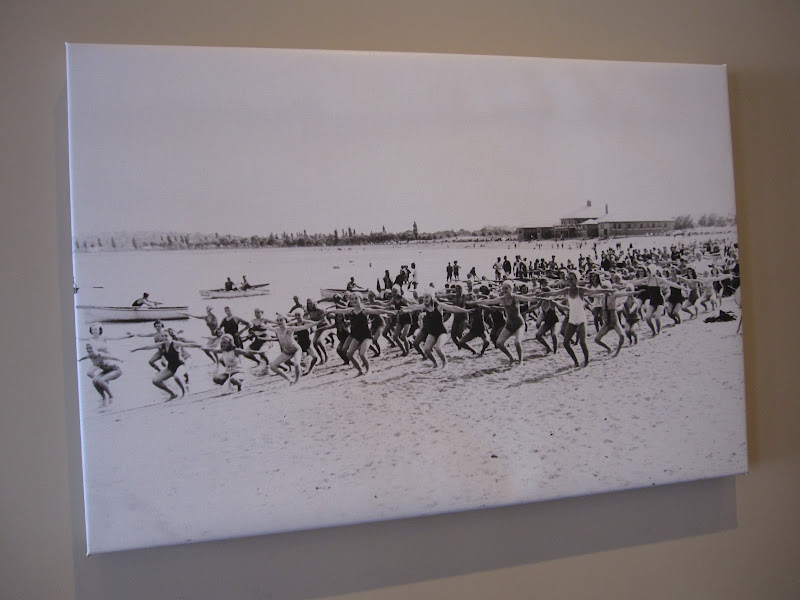 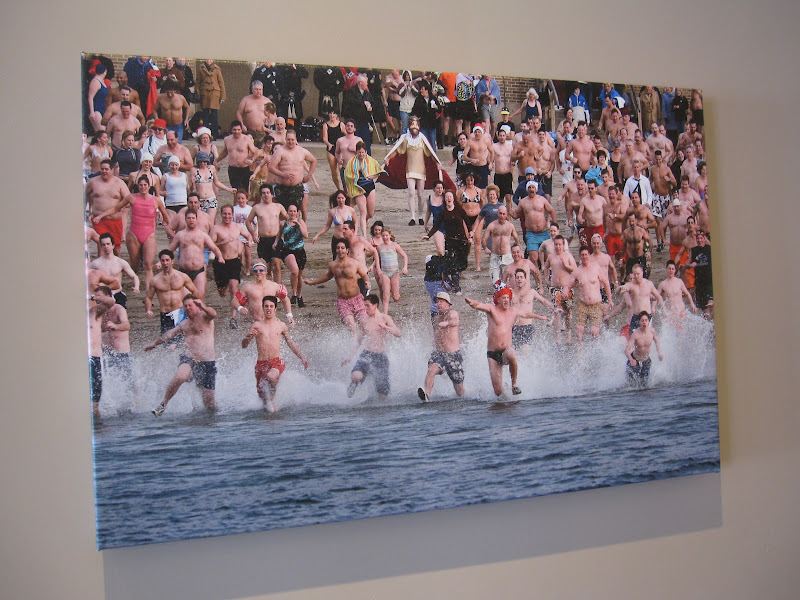 Have you been to the new Paramount in Southie? What did you think?

I have not been to the new one! your sandwich looks wonderful.

I saw the Chronicle piece about the new location. Looks like such a fun spot!

i just went to the paramount for dinner, and it's a totally different vibe (dark/romantic/bar-y), but still delicious!! 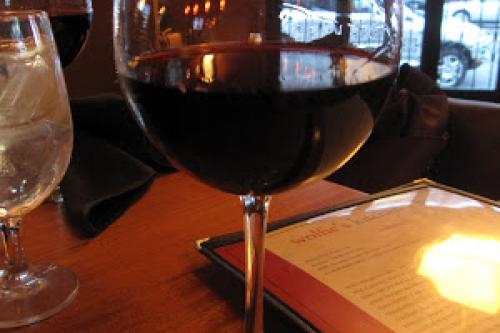 When I graduated from college in the spring of 2006 my very first job was at Fidelity Investments in the Seaport. At the time, that area was very . . . sparse. There were the three World Trade Center buildings, the Seaport Hotel (and more importantly, its lobby bar, Aura), a place called the Seaport Bar & Grille (now Atlantic Beer Garden), Anthony's Pier 4 and LTK. That's it. The entire rest of Seaport Blvd was parking lots. 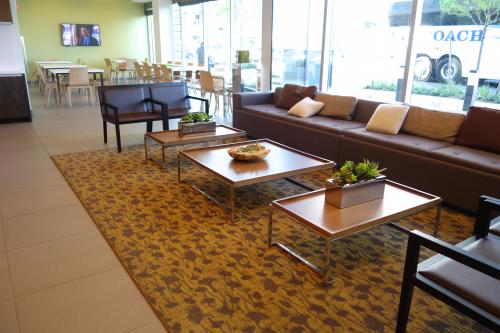 During my stay at the Aloft Boston Seaport I also had the chance to tour Element Boston Seaport, a fellow Starwood Hotel property. Aloft and Element share a driveway, but they each have very distinct personalities.