Dining Out: Miracle Of Science

First of all, thank you to everyone who read my Gossip Girl review and informed me that Cedric the cabbage patch kid is not only not a new character, but he appeared as early as season one! What would I do without you, readers?

Over the weekend I had two sets of relatives in town: my parents were up from Miami, FL and my cousins were up from New Jersey. On Saturday afternoon we all met for a late lunch in Central Square in Cambridge. My cousin, who is a junior in high school, was looking at MIT, so we picked Miracle of Science as our meeting place.

Though I've always known about Miracle of Science, I'd never been. When we walked in the place was completely packed! 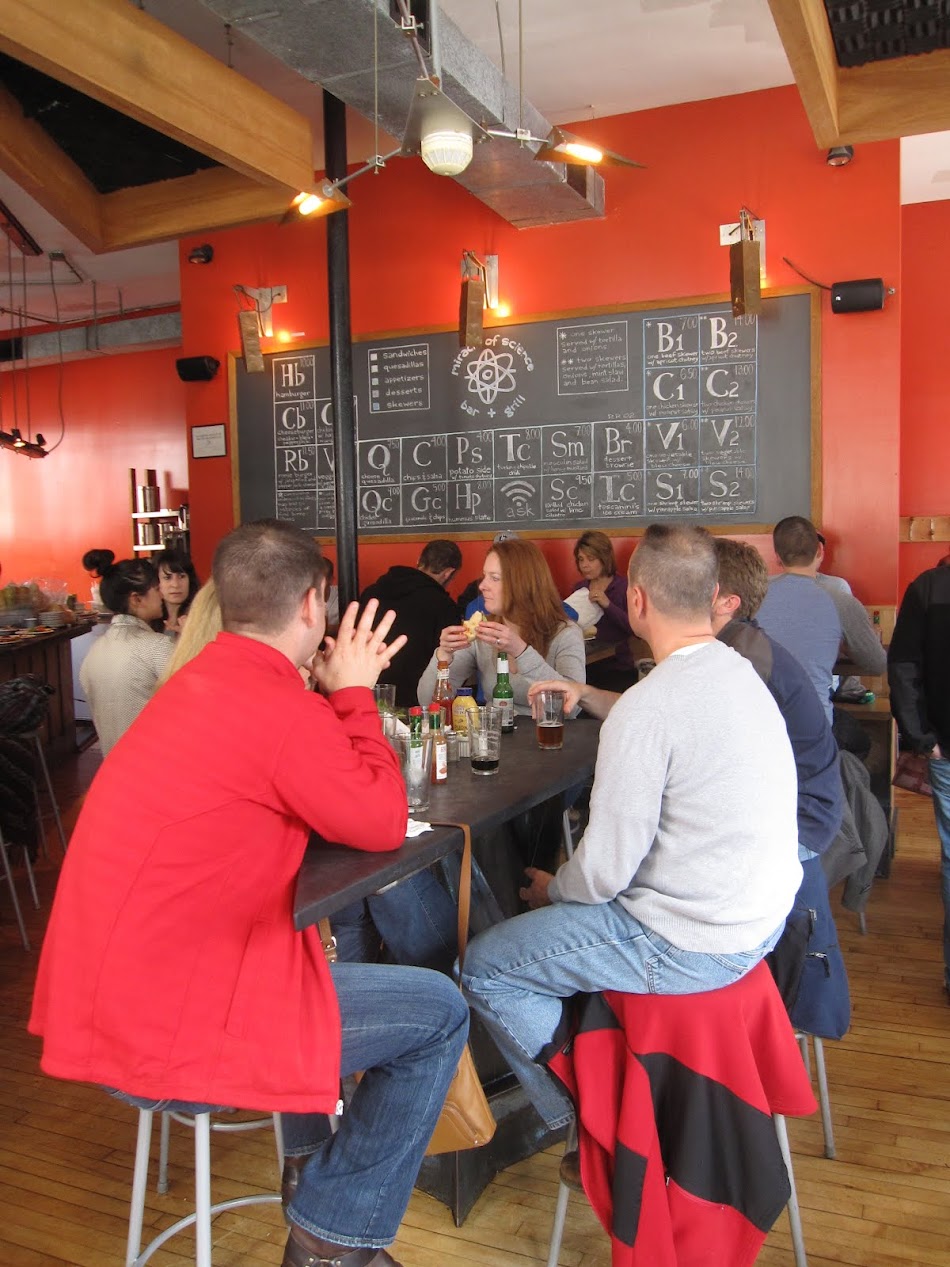 There were a few big group tables and then a row of tables in the windows facing Mass Ave. 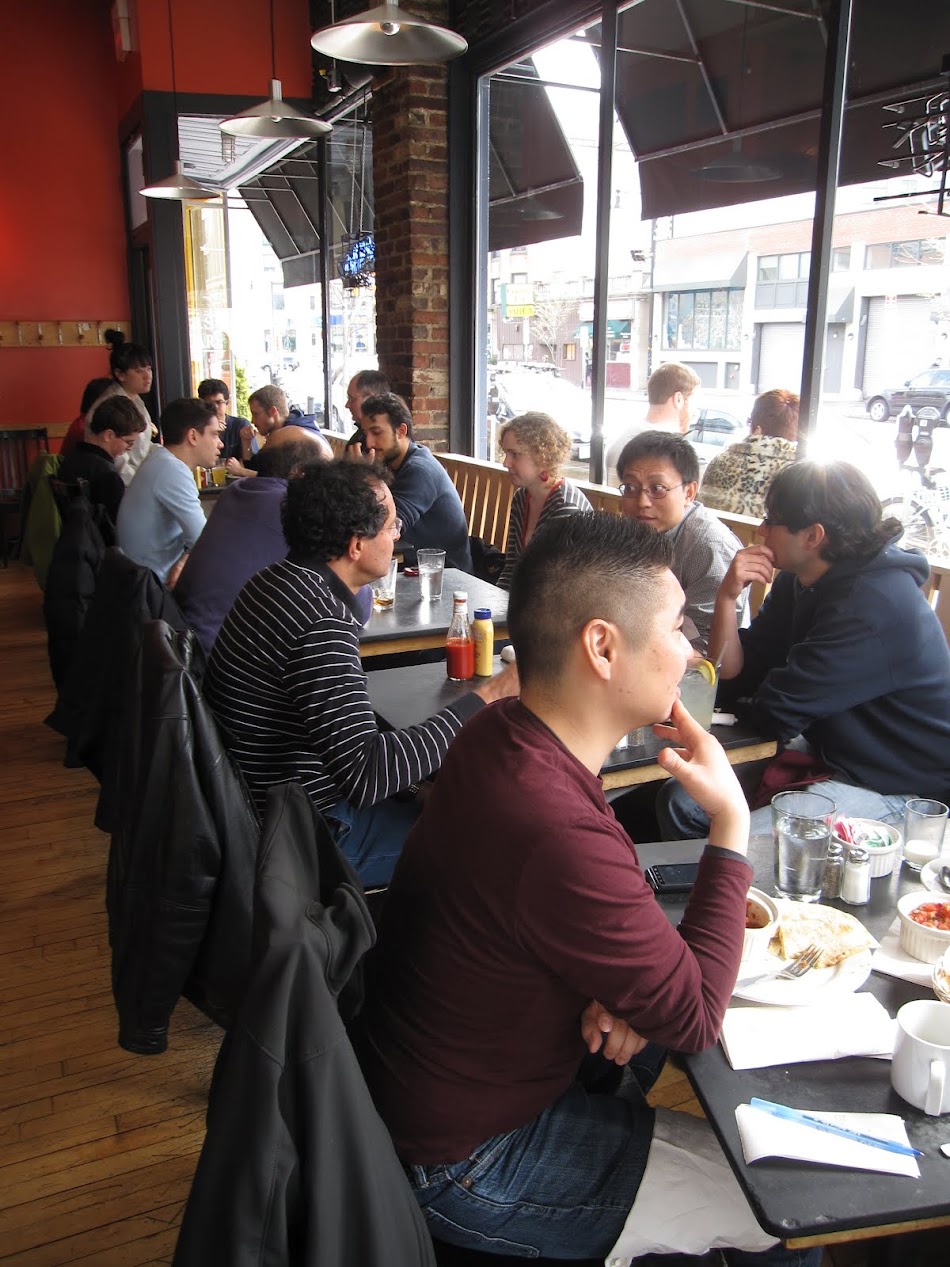 There was also a small counter on the opposite wall and a bar with stools that reminded me of the stools in my middle school art classroom. 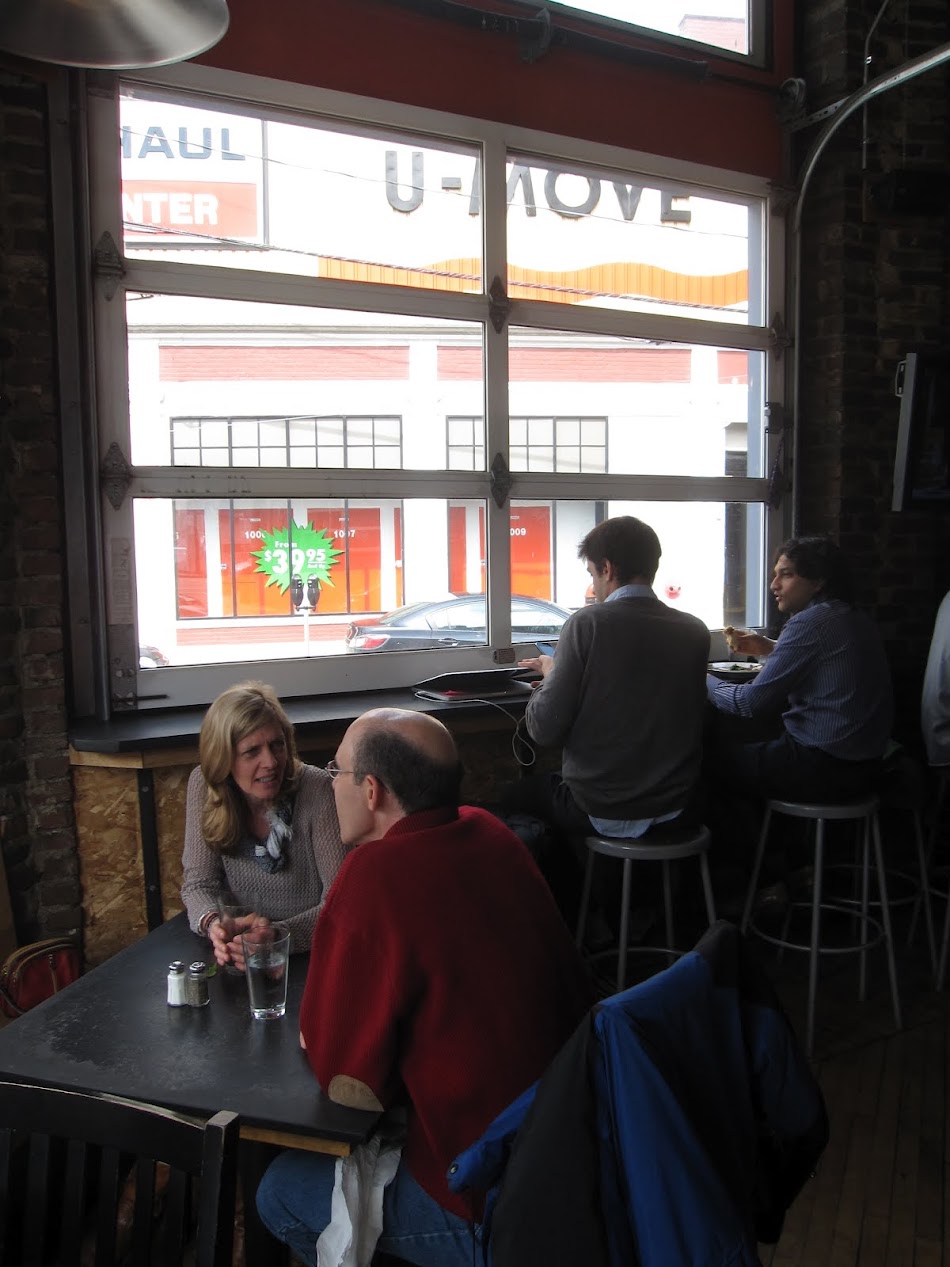 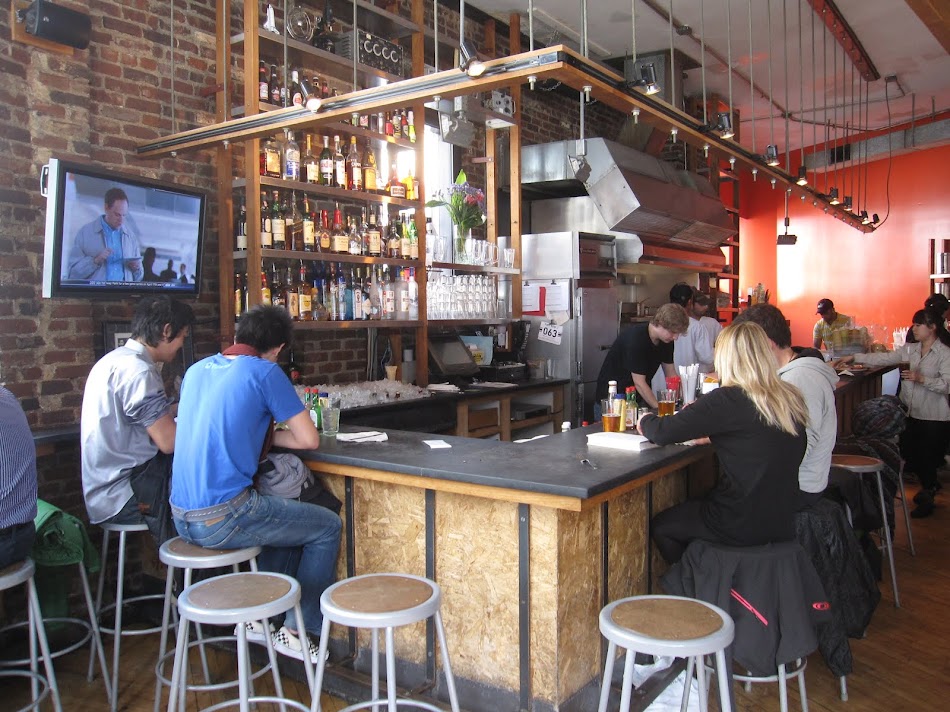 I love that exposed brick wall!

We told the hostess we were going to be 10 people and she looked back at us like we were speaking Japanese. Thankfully, a table got up right away and my dad and I sat down while we waited for the rest of the gang. That same hostess came back over and said, "Excuse me, you can't sit here unless you really have other people coming. We don't allow people to hold tables." Um, did you not just hear me say we are going to be 10 people?

A few minutes later my aunt, uncle and three of my cousins arrived. Just as they were getting situated, the table next to us also got up, so we snagged that too. When my other cousins arrived, our party was complete - a full 10 people.

There were three waitresses on duty and they seemed to be tag teaming service for every single table. Different girls kept coming over to ask if we needed anything to drink. I kept waiting for them to bring over menus when I overheard one of the waitresses say, "Actually, the menu is up on the wall." 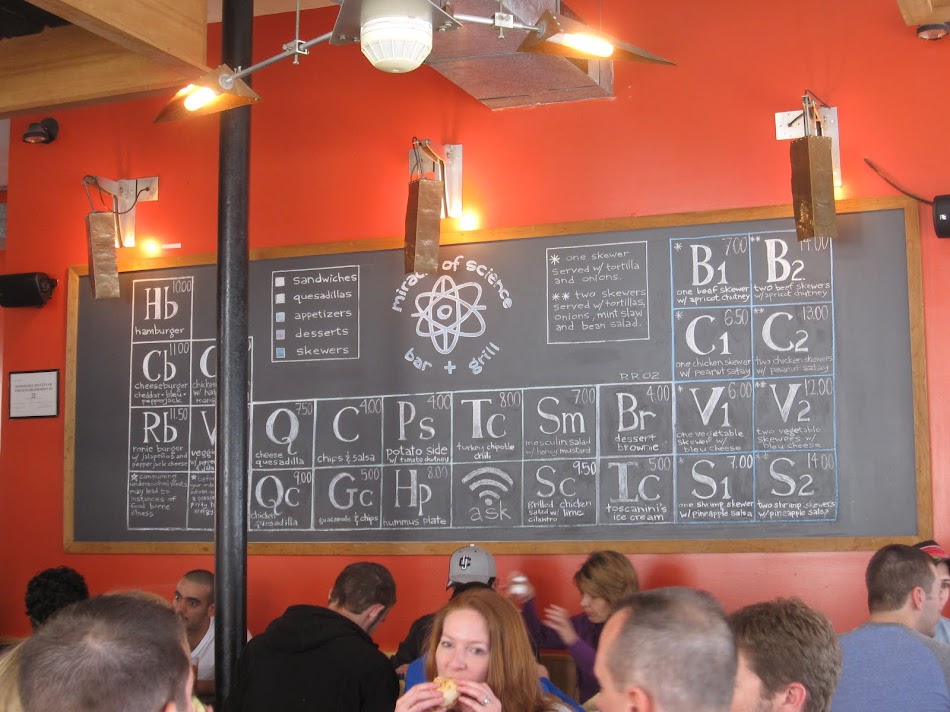 The menu is a chalk design that is meant to mimic the periodic table of elements. Nerd alert! This is totally a place Sheldon from "The Big Bang Theory" would hang out.

In my old age I had to squint to read all the choices. After much deliberation, we placed our order.

The bartender brought out the food and had no idea who ordered what, which created chaos at the table. After the parade of plates, two of us still didn't have our meals. It took the bartender and all three waitresses a few minutes to get everyone what they ordered.

Several family members ordered the hamburger or cheeseburger. Each came with a side of potatoes (they don't do french fries) and a tomato sauce for dipping. 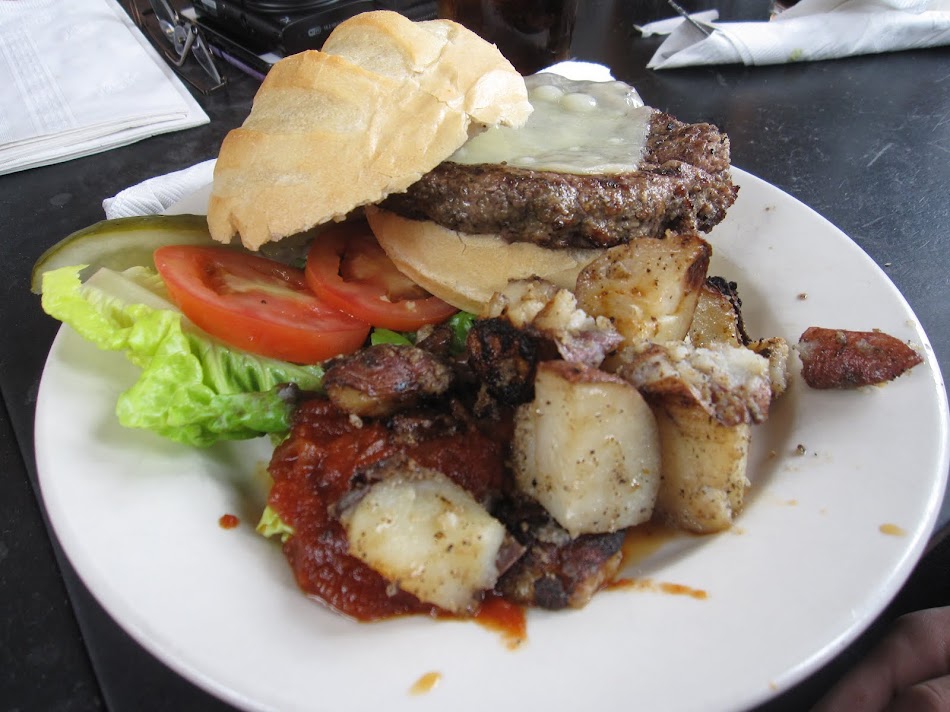 I ordered the veggie burger which was so clearly a supermarket patty. It was barely edible. 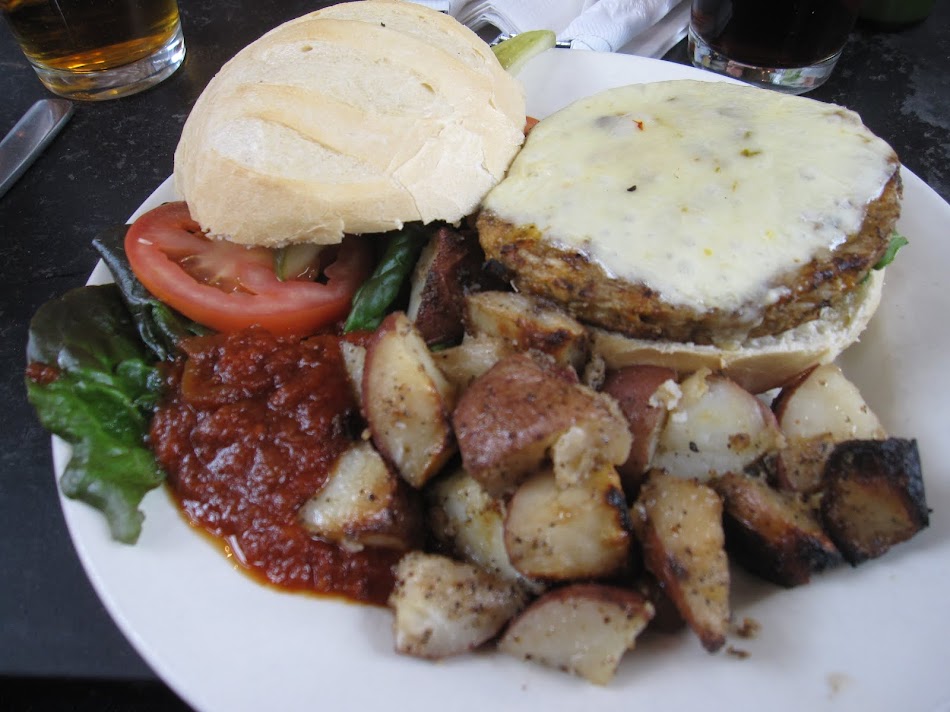 My cousin ordered the chicken skewers which she loved. They came with black bean salad, re-fried beans, red onion and soft tortillas. 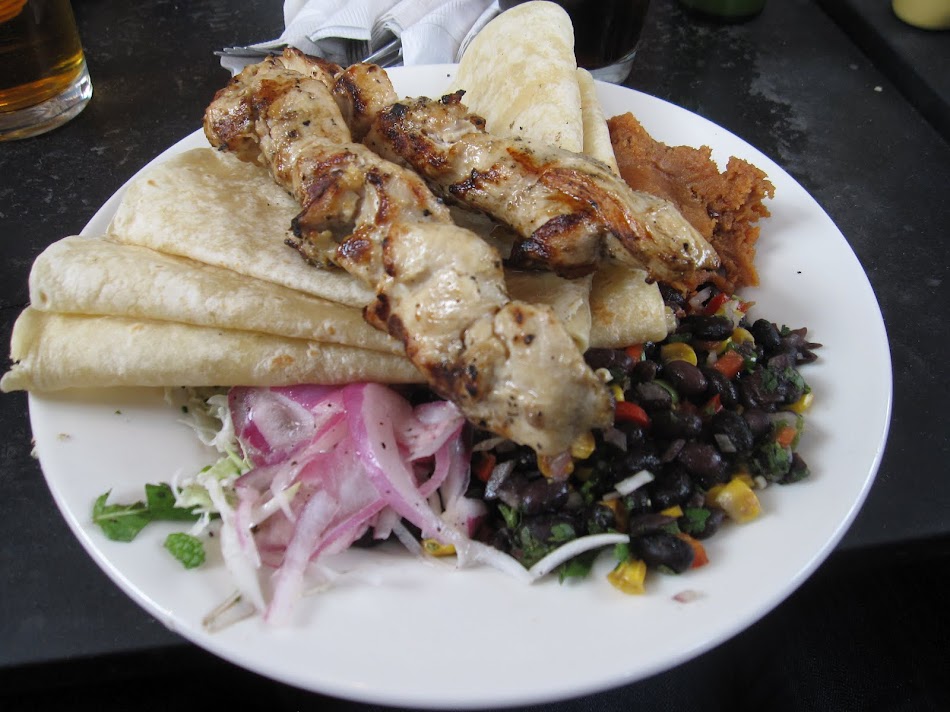 My dad ordered the turkey chili which came garnished with tortilla chips and sour cream. He loved it! Everyone was jealous watching him scoop up his chili with the chips. 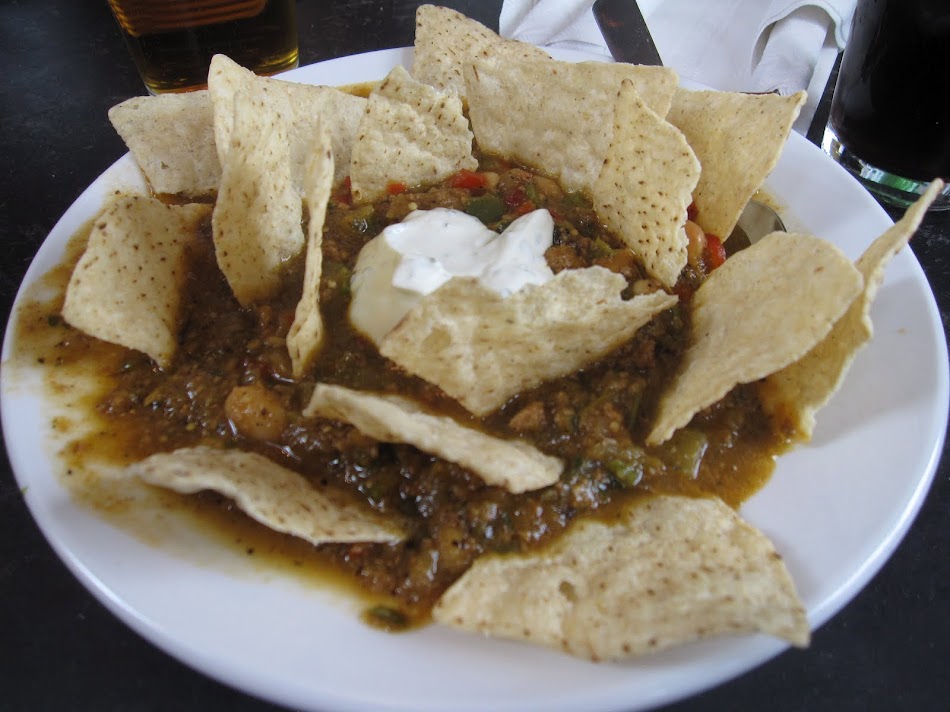 Throughout the meal when anyone needed something - more napkins, water, a refill - the waitresses were nowhere to be found. They seemed completely inconvenienced by having to do the basics of their job.

Though Miracle of Science is in a great location and their menu presentation is awfully fun, nothing can make up for the horrible service and bad attitudes. I'm going to try my best never to eat there again.

วิธีคิดบอลสเต็ปMany good promotions that look for both old and new customers. 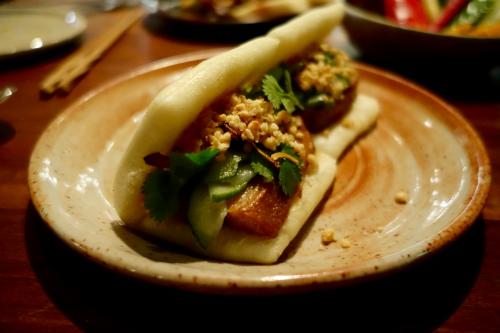 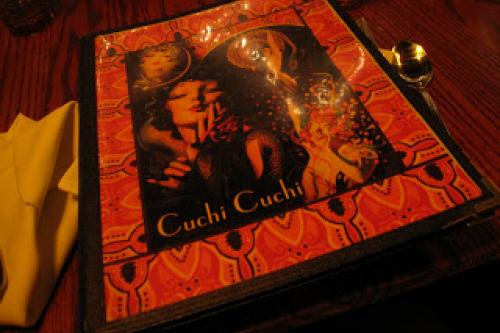 Saturday evening I went out with 12 girlfriend's to celebrate my 26th birthday. 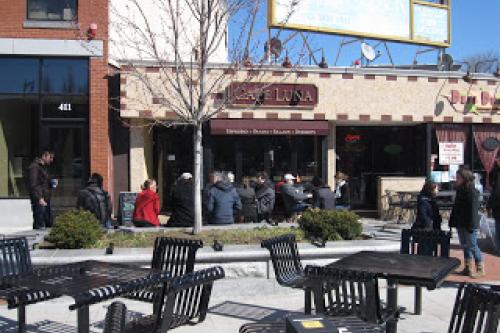 Back in February I read a review of Cafe Luna on a blog I follow on Twitter,