Last night I hosted a group of my best girls for my annual Oscar viewing party. We assembled at 7:00pm to mercilessly judge the stars as they strutted down the red carpet on their way into the Kodak Theater.

Minus Sacha Baron Cohen spilling an entire box worth of Bisquick onto Ryan Seacrest, I have to admit, nothing really grabbed my attention. Overall, I found the fashion super underwhelming.

I spent the better part of the last two weeks highlighting for you all of the New York Fashion Week dresses I thought should make their first post-runway appearance on the red carpet and not a single one did! Major disappointment.

None the less, tradition is tradition and so, I bring you Pop.Bop.Shop.'s Best and Worst Dressed list.

1) Giuliana Rancic - I highlighted her red, figure hugging dress at the Golden Globes and G wow-ed me again last night in Tony Ward Couture. For me, she was the best dressed last night by a mile. The leaf design on the shoulders of her dress was so feminine and delicate, the sheer panel across the chest showed modesty and then the glitz of the gown's bodice celebrated the occasion. Home run, G! 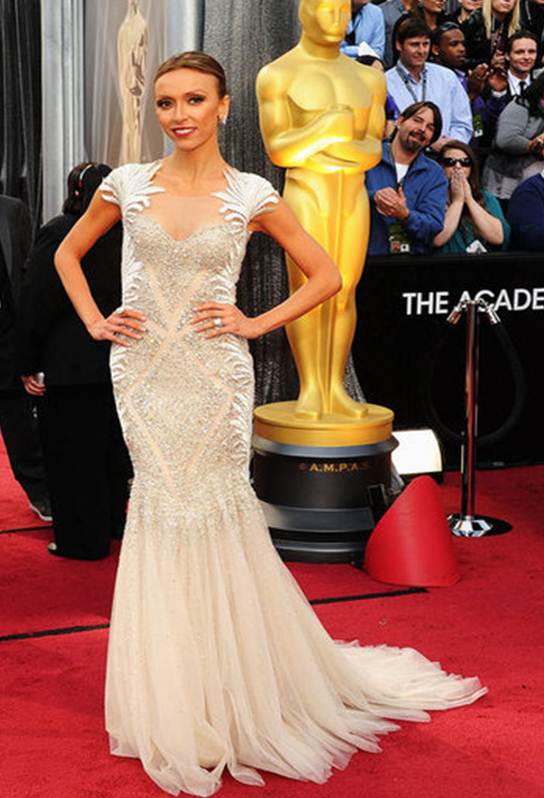 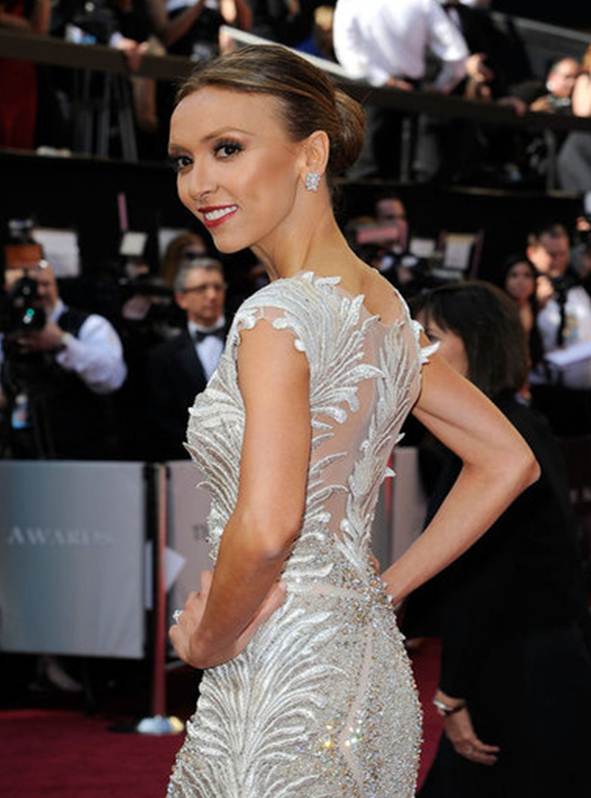 2) Ellie Kemper - Ellie plays Erin on NBC's "The Office" but was at the Oscars supporting her film "Bridesmaids." I loved this copper colored, sequin dress from Armani Prive that perfectly matched her copper locks. 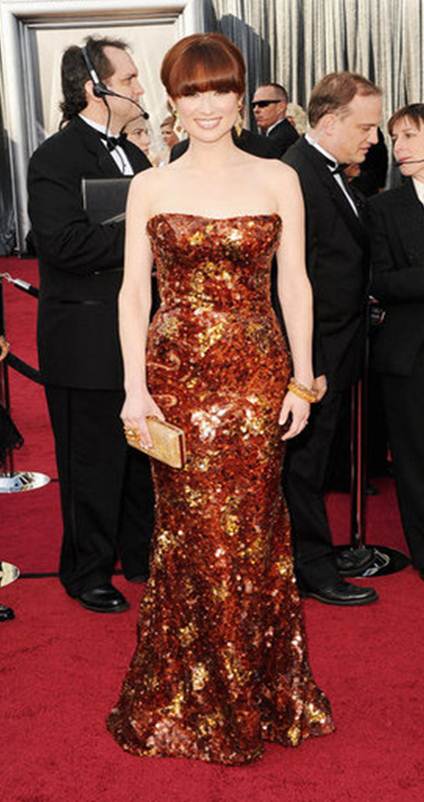 3) Rose Byrne - Kemper's fellow "Bridesmaids" cast member turned heads in this black, sequin, one shoulder number by Vivienne Westwood which had a nearly 100 percent open back. I loved the styling of the blunt bangs with this dress. 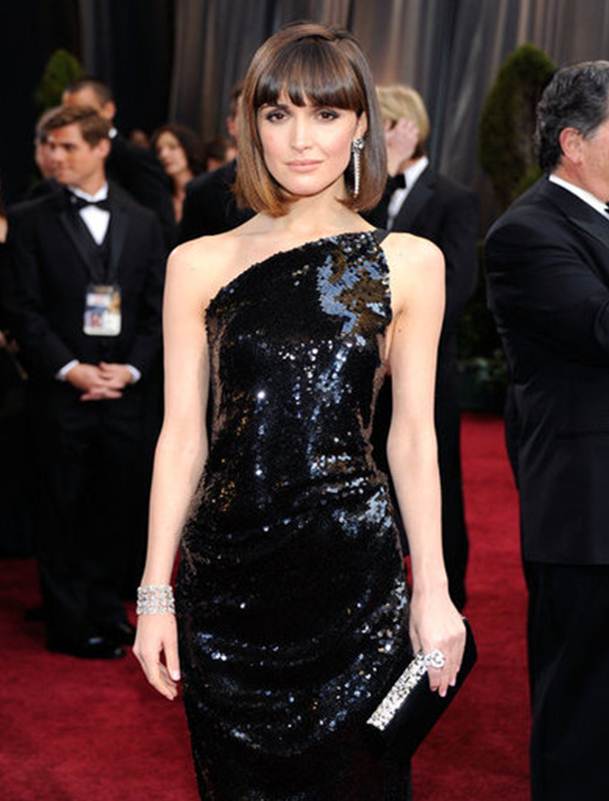 4) Viola Davis - Though I wasn't loving the short, lighter hair, I was gushing over her emerald green, Vera Wang gown which felt like a mermaid come to life. As soon as I spotted Viola on the carpet I thought, "Her Oscar is going to look beautiful on stage against that green color." 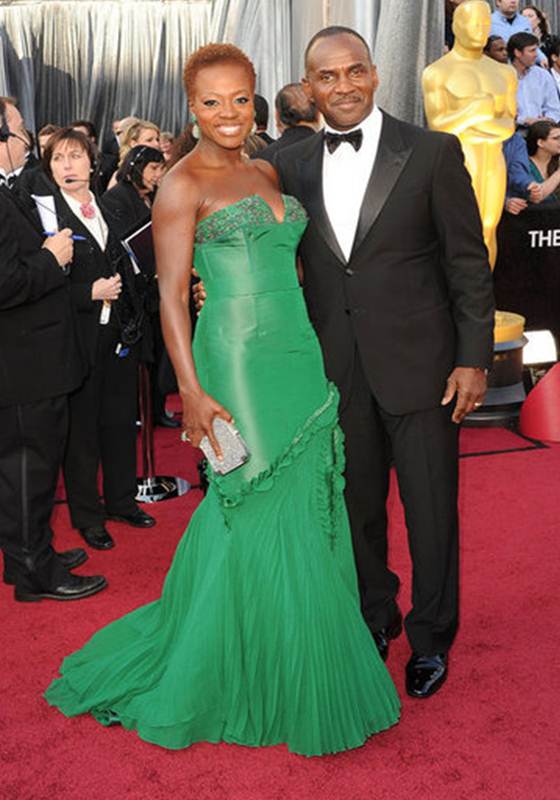 5) Natalie Portman - Portman dressed impeccably last year during her pregnancy and brought her A game again last night in Christian Dior (she is the face of the designer's perfume, Miss Dior). Though one of my party attendees said, "This looks like something from J. Crew bridal," I still loved it. 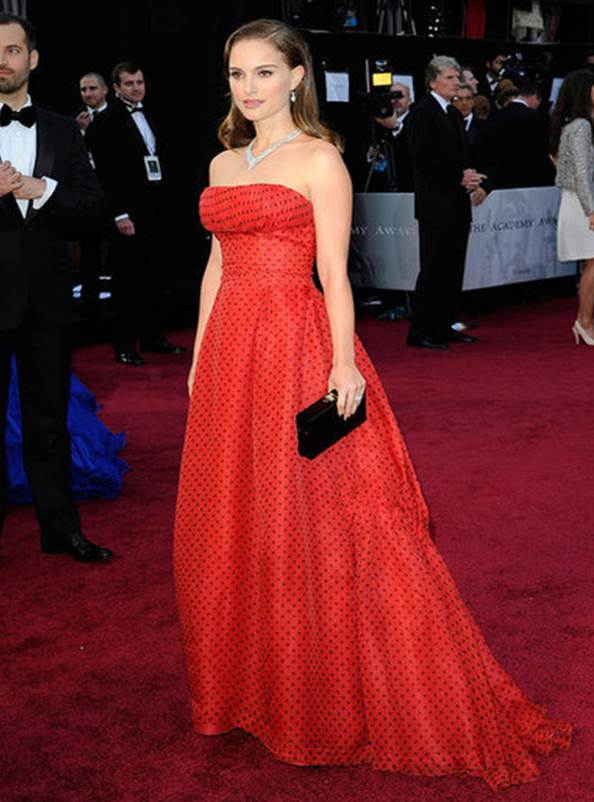 6) Gwyneth Paltrow - At first I wasn't sure what to make of this white, cape/dress combination from Tom Ford, but over the course of the broadcast it really grew on me. The simplicity became more and more stunning. It's brave to take a risk like this at the biggest awards show of the season, but Gwyneth really pulled it off. 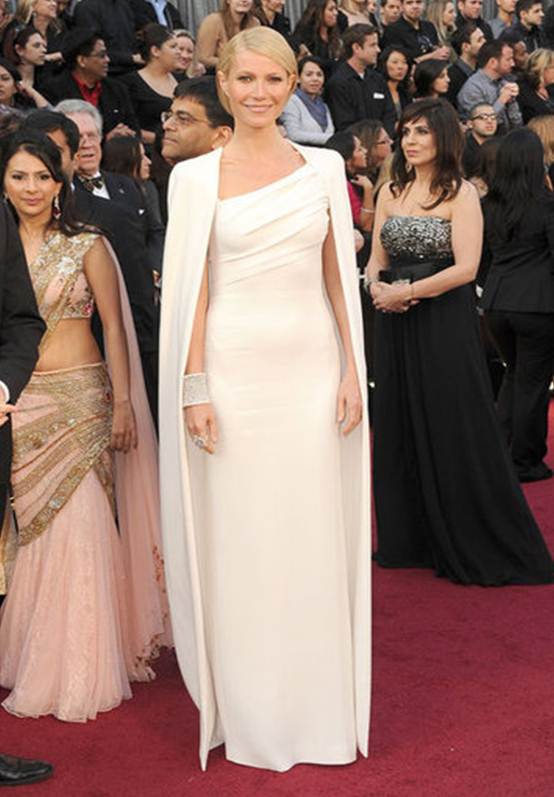 1) Melissa McCarthy - I root for Melissa McCarthy. I have been rooting for her since she played Sookie St. James on "Gilmore Girls." My devotion was tested last night when she arrived in this Marina Rinaldi gown that made her look like Miss Piggy. All I can do is shake my head. 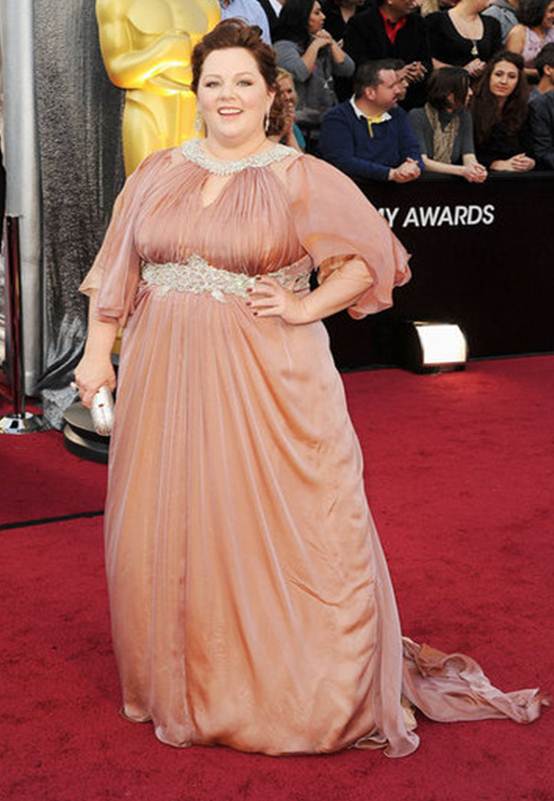 2) Emma Stone - Emma Stone is having a great year. Her film "The Help" has been out on DVD for weeks and is still soaring in popularity, she is slated to appear in the next Spiderman movie and she was even asked to present during last night's show. As if to give the universe a giant flip of the bird, she wore this monstrosity by Giambattista Valli. 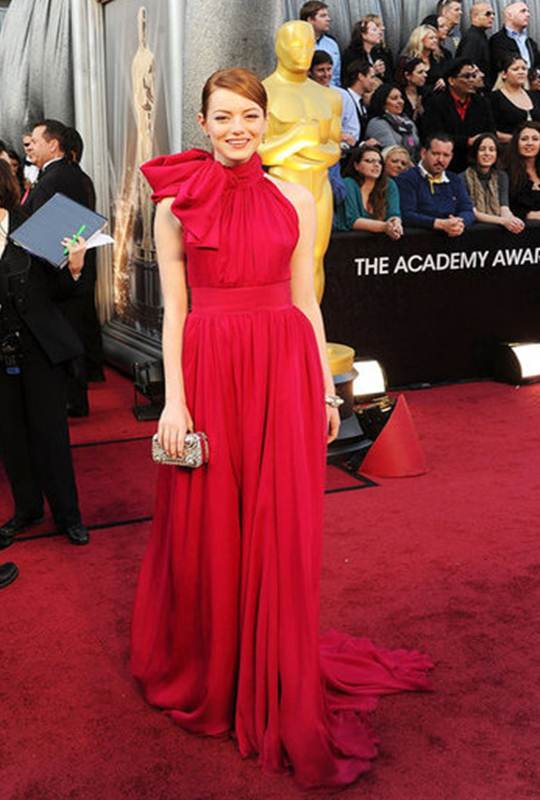 3) Jennifer Lopez - If this dress had simply had straps and not full sleeves with cut outs, J. Lo could have won "Best Dressed." This dress hugged her body in the all the right places, the cut was beautiful and the pattern was designed to slim. However, the full length sleeves with those useless cut outs made her look like she took scissors to her dress at the last minute. 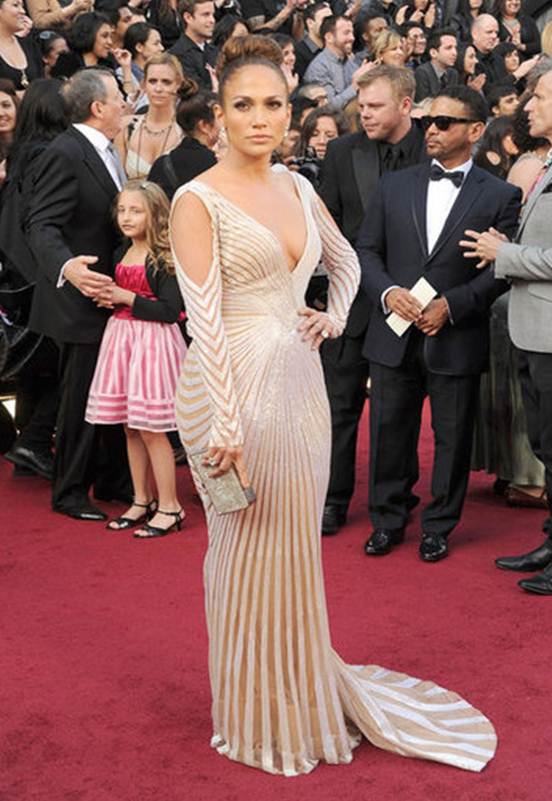 4) Cameron Diaz - Diaz presented two awards with J. Lo and I was turned off by both of them. Diaz, who is a client of Team Zoe (who I love), showed up in a nude colored Gucci gown that was not doing her a single favor. Diaz has a rockin' body, but this dress was just too tight, too flesh toned and honestly, not fun enough. 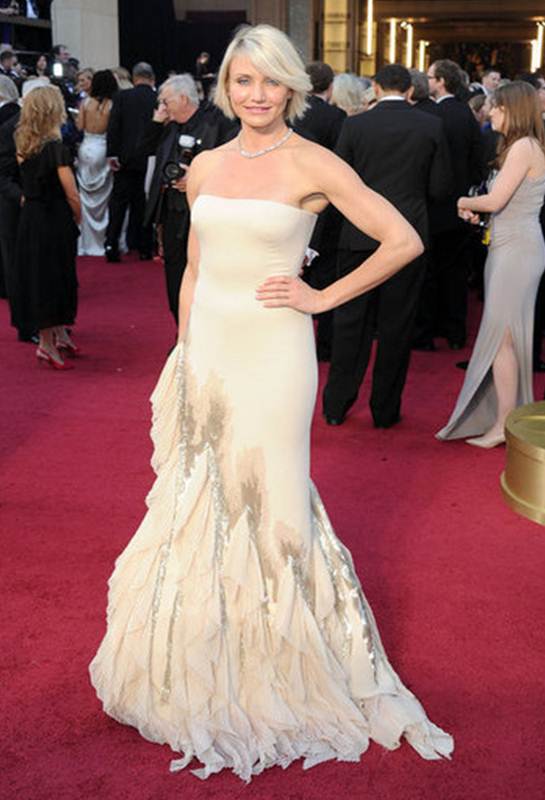 5) Michelle Williams - I love that Michelle Williams named her daughter Matilda, had the courage to take on the role of Marilyn Monroe and that she brings her best friend Busy Phillips as her date to every award show. What I do not love is this Louis Vuitton dress that has two levels of skirt, neither of which is flattering. 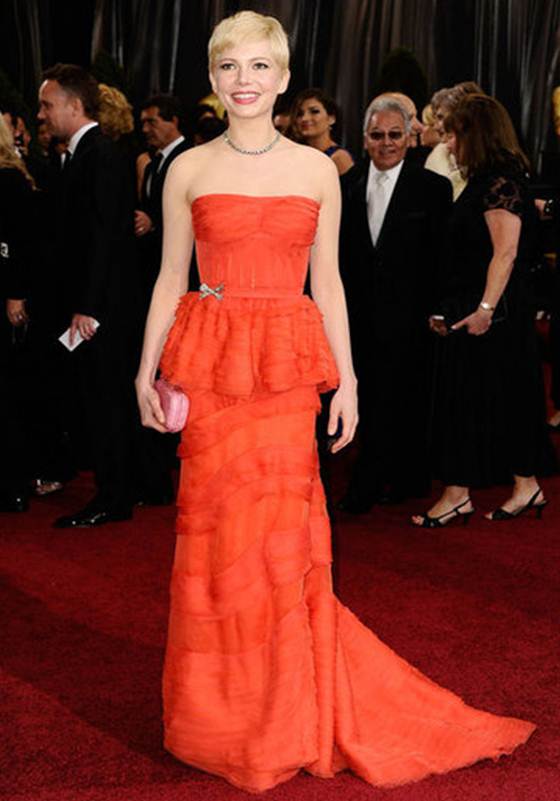 6) Shailene Woodley - Woodley, who is making the awards show rounds for "The Descendants," has been a disaster on the red carpet all season. When you've got something going, why ruin it, right? Woodley showed up in another horrifying choice last night. She looks like she's wrapped in a paper towel. Can you believe this is Valentino? 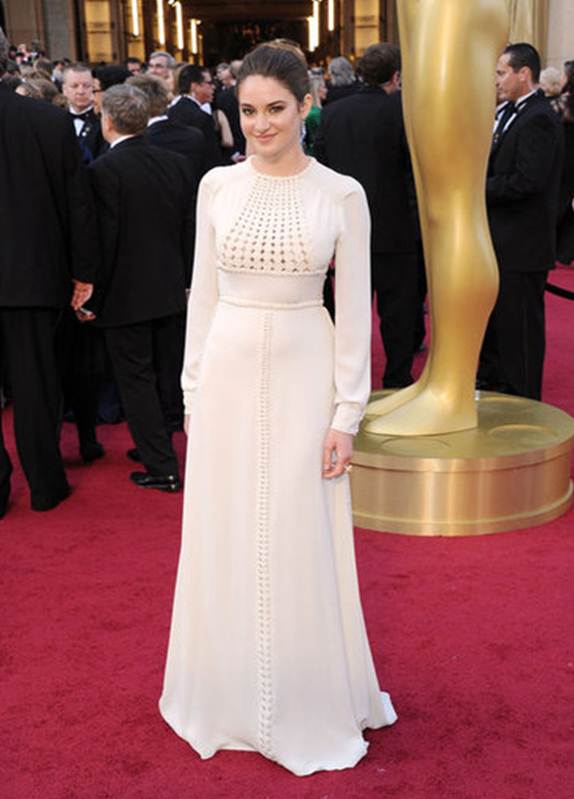 And there you have it!

Do you agree or disagree with my picks? Is there someone's outfit you loved or loathed?

*All images courtesy of Pop Sugar.

The pictures you chose are helping me realize what some of these dresses actually looked like. J-Lo's dress is really quite horrible, ha! But I TOTALLY agree that Ellie Kemper looks AWESOME! Her hair and dress match perfectly (which could go oh-so-wrong, but didn't)! Thanks for the review! :)

G rocked the red carpet show and that dress. I agree with your choices and find your commentary hilarious. Woodley is 22 - girl needs to dress her age!!

END_OF_DOCUMENT_TOKEN_TO_BE_REPLACED

Planning on streaming this weekend? I've got six shows and movies to help you make the perfect pick. 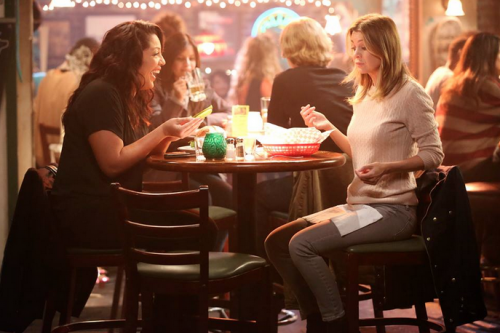