Yesterday I had a fantastic day in Cambridge. It started with brunch at the S&S, followed by wandering through the whimsy in Boutique Fabulous, followed by "The Artist" at the Kendall Square Cinema and topped off with an early and finger-licking-good dinner at the All Star Sandwich Bar.

I wasn't planning on seeing "The Artist." My parents and sister saw it a few weeks ago and in the words of my mother, "We hated it! It was so boring! And slow!" With that swift disapproval, I crossed it off my "to see" list.

That is until it won best actor and best film in the comedy or musical categories at the Golden Globes last Sunday. I was starting to feel like if I didn't see it, I'd regret that choice come Oscar night.

When we arrived at the theater yesterday at 4:10pm for the 4:20pm show we were shocked by how packed the theater was. We had to sit in the fourth row from the screen, wiggle down low into our seats and lean all the way back just to see. Not ideal.

For those who aren't familiar, "The Artitst" is a black and white, silent film that tells the story of a silent film star who becomes old news when "talkies" get introduced to American cinema in 1929.

Jean Dujardin plays George Valentin, the silent film actor who loses his way when his style of film goes out of style with main stream America. 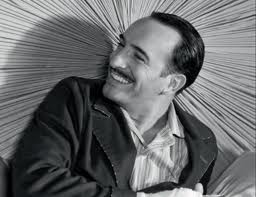 Berenice Bejo plays an extra, Peppy Miller, who gets her start by physically bumping into George while he talks to the paparazzi. They take a photograph of George and Peppy together, a photo that essentially launches her career. 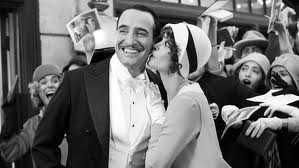 Peppy goes on to become a talkie star while George struggles to find his place in the world. He becomes depressed, loses all his money and eventually tries to hurt himself. Twice.

Ultimately, Peppy comes to the rescue and saves George from himself. Their initial chemistry that day with the paparazzi never dies and they become an onscreen duo once again. 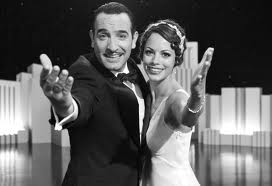 In my opinion, the movie was too long. The portion where George spirals further and further into his depression felt like it took an hour. We get it, he's a has been. Move on!

I was also irritated that at no point in the movie do George and Peppy actually get together! They have such genuine chemistry and there isn't even one kiss! Not even to seal the happy ending! Throw us romantics a bone, will ya!

Durjardin was fantastic in this role. His classic, old Hollywood good looks are undeniable and his expressive face lights up the screen.

Bernice Bejo literally sparkles on camera. The scene where she puts her arm through George's jacket and acts like they are dancing together was my absolute favorite.

I also want to give props to Uggie, the dog who plays George's side kick. That was one talented dog! Dujardin brought him on stage at the Golden Globes for his acceptance speech, which was so nice for the dog's owners and trainer! 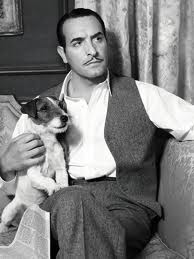 If you're into awards season, definitely see "The Artist" so you can feel informed during the ceremonies, but otherwise, skip it.

END_OF_DOCUMENT_TOKEN_TO_BE_REPLACED

Jessica Chastain stars as Molly Bloom, the poker princess, is this fast-paced drama written and directed by Aaron Sorkin. 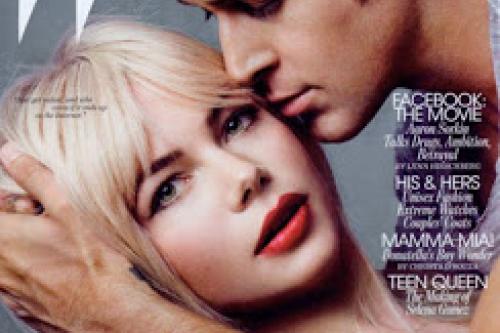 I recently finished reading Entertainment Weekly's fall movie preview and one of the films I am most looking forward to is "Blue Valentine." The movie stars two of my favorite dramatic actors, Michelle Williams and Ryan Gosling. My anticipation was intensified after seeing this delicious new W magazine cover: